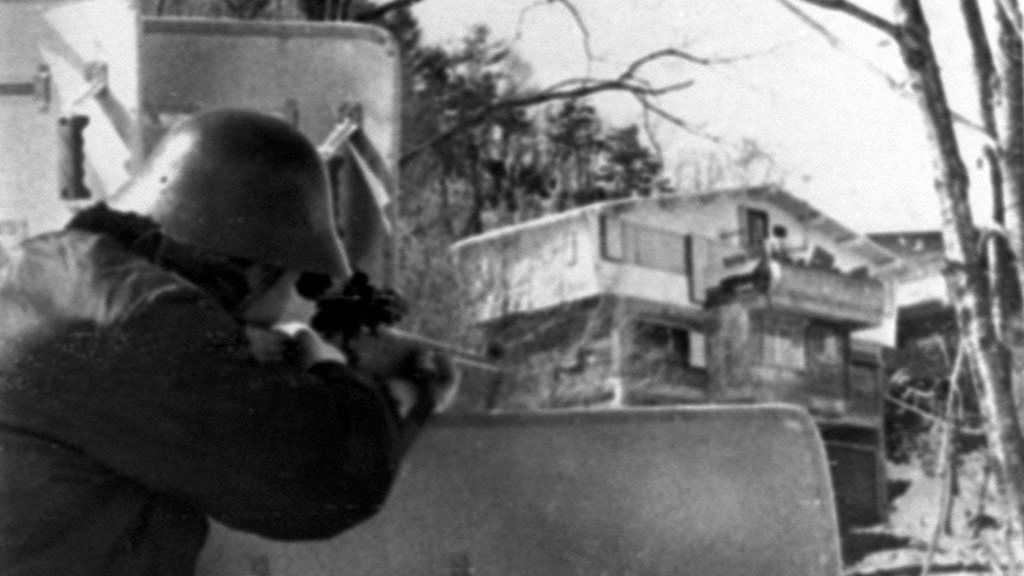 Terror in Japan: Far-Left Groups and the Asama-Sansō Incident of 1972

Society History Feb 14, 2022
Far-left radicals instigated a number of terrorist incidents in Japan and around the world in the 1970s. In one of the most famous of these—the Asama-Sansō Incident—a hostage crisis was followed by the discovery of 14 bodies of radical group members killed during an internal purge.

It is 50 years since the Asama-Sansō Incident, which gripped and shocked Japan from its beginning on February 19, 1972. Five young men armed with guns seized Asama Sansō, a mountain lodge owned by Kawai Musical Instruments Manufacturing in Karuizawa, Nagano Prefecture. They took the caretaker’s wife hostage and periodically fired at the police and riot squad units that surrounded and besieged the lodge over 10 days. The police stormed the building on February 28, rescuing the hostage unharmed, but two officers were fatally shot during the assault. A member of the public, who had approached the door of the lodge on February 22 and been taken for a police officer and shot by the group inside, died in the hospital on March 1, bringing the number of fatalities to three.

The five men, who had continued to resist through attacks with tear gas and jets of water, were arrested on the evening of February 28, as the assault team captured them alive. They were members of the United Red Army: Sakaguchi Hiroshi led Bandō Kunio, Yoshino Masakuni, and the teenage brothers Katō Michinori and Motohisa. 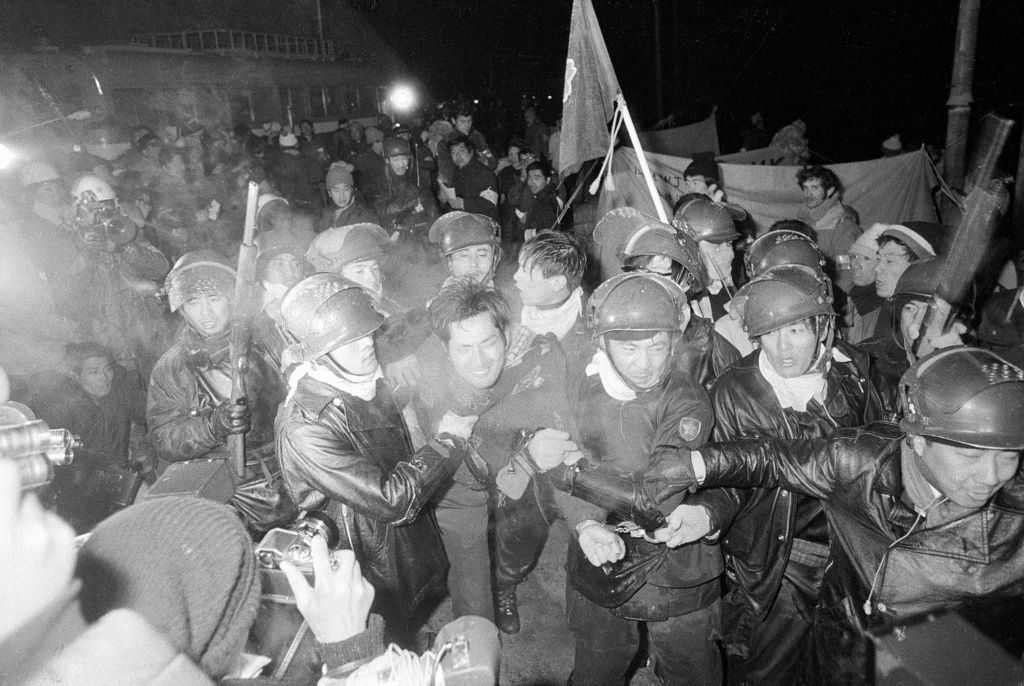 Sakaguchi Hiroshi (center) surrounded by police after his arrest in Karuizawa, Nagano Prefecture, on February 28, 1972. (© Kyōdō)

What kind of group was the United Red Army? It was formed on July 15, 1971, through the unification of the Communist League Red Army faction and the Japanese Communist Party’s Revolutionary Left Kanagawa Committee. The Red Army had become reduced in numbers and the Revolutionary Left had always had few members, so the “united” organization was still small-scale and lacking in power. Both were founded to perform acts of illegal violence at a time when the student movement seemed to be at a dead end and many students were starting to drift away from political activities. They were identified by the police as the most radical of the extreme-left splinter groups among the new left-wing organizations.

The Red Army faction derived from the Communist League, which had played a leading role in the 1959–60 demonstrations against the Japan-US Security Treaty. Also known as the Bund, the Communist League had been formed on December 10, 1958, by members splitting away from the JCP. The Red Army faction was founded in 1969 based on the principles of its leader, Shiomi Takaya, of seeking simultaneous global revolution. It planned armed uprising as a preliminary stage, performing Japan’s first hijacking incident the next year—the Yodo-gō Hijack, involving Japan Airlines flight 351, a Boeing 727 called the Yodo—with the aim of establishing an international base.

The Revolutionary Left group emerged when Kawakita Mitsuo of the Marxist-Leninist Union invited Kawashima Tsuyoshi of the Marxist Front and brought members who had been expelled from or left the JCP into the Keishō (Alarm Bell) research group established in April 1966. The group adopted the slogan han-Bei aikoku (patriotic and anti-American), and committed itself to the teachings of Mao Zedong, including the phrase “Political power grows out of the barrel of a gun.” It obtained shotguns and ammunition through a raid on a firearms store. 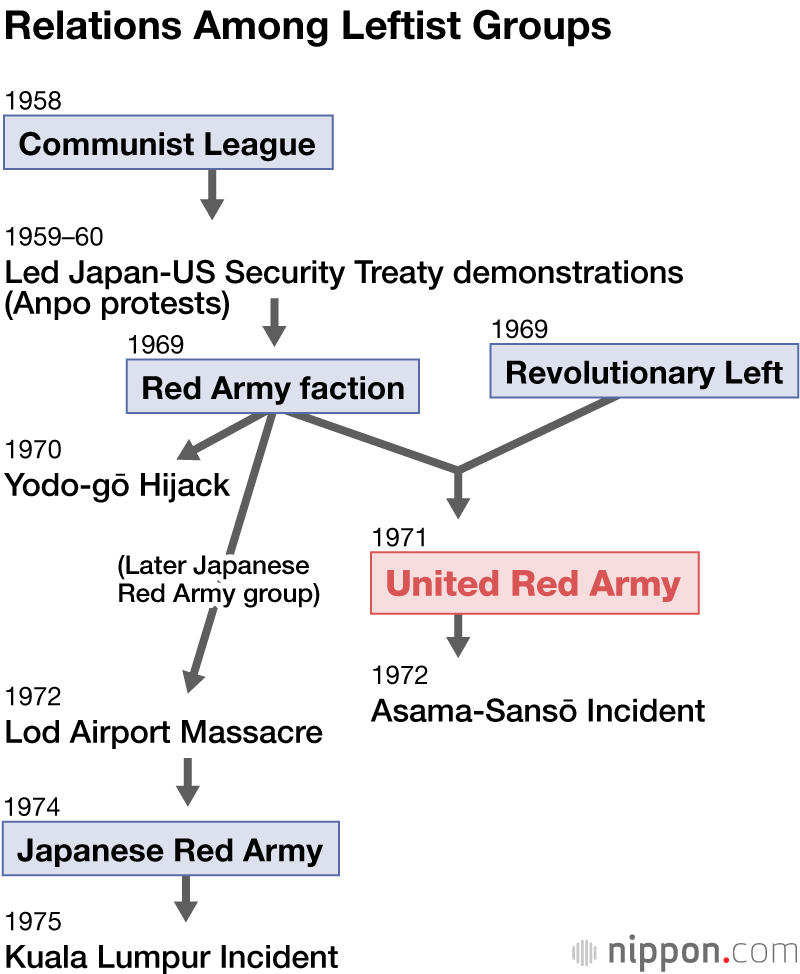 Police authorities saw the amalgamation as nothing more than a loose grouping that indicated how the two organizations were under pressure. Yet both saw benefits from being together, as the Red Army faction had cash seized through its “M strategy” of successive attacks on financial institutions, while the Revolutionary Left had the guns and ammunition from its firearms store raid. Following these crimes, thorough police searches of city apartments resulted in many arrests of members and naming of wanted fugitives. Given the difficulties of laying low in urban environments, the groups decided to establish mountain bases to live in communally.

At first, they gathered in separate locations. From late November 1971, however, they came together in a base on Gunma Prefecture’s Mount Haruna, living as the United Red Army. There should have been 28 members at this stage, with 9 from the Red Army faction and 19 from the Revolutionary Left. Once the two groups assembled, though, three members were killed through sōkatsu, a process whereby those seen as lacking the qualities to be revolutionary soldiers were forced to undergo “self-criticism” with the professed aim of overcoming their mental weakness.

Another man, who was not part of either of the two original groups, also joined up, and one couple among the members had a young baby. Including the sōkatsu deaths, there were 30 people altogether connected to the United Red Army.

The Revolutionary Left had already killed two members who fled from its first mountain base in August 1971, burying them in Inbanuma, Chiba Prefecture. Added to 12 additional fatalities discovered later near the Mount Haruna base, there were 14 deaths altogether in the group. What caused this bloody outcome? First, the Red Army faction leader Mori Tsuneo sought to achieve control over the combined group, and the Revolutionary Left chair Nagata Hiroko responded by finding fault with the one female member in the Red Army faction. Mori fired back by calling for the need to instill communism (kyōsanshugi-ka) to form revolutionary soldiers with the persevering spirit to win a war of annihilation. This way of thinking led to the use of sōkatsu on suspect members.

Through its use of violence to “support” self-criticism, the organization killed some of its members during the sōkatsu process. Their deaths were followed by others from mob-style violence and finally executions. Contributing factors to the death count are likely to have included disregard for potential political issues over the unification of the two groups, a lack of capability among the leadership (including Mori, Nagata, Sakaguchi, Bandō, and Yoshino), unquestioning obedience among the ordinary members, the harsh cold of the mountain environment, and poor food supplies. 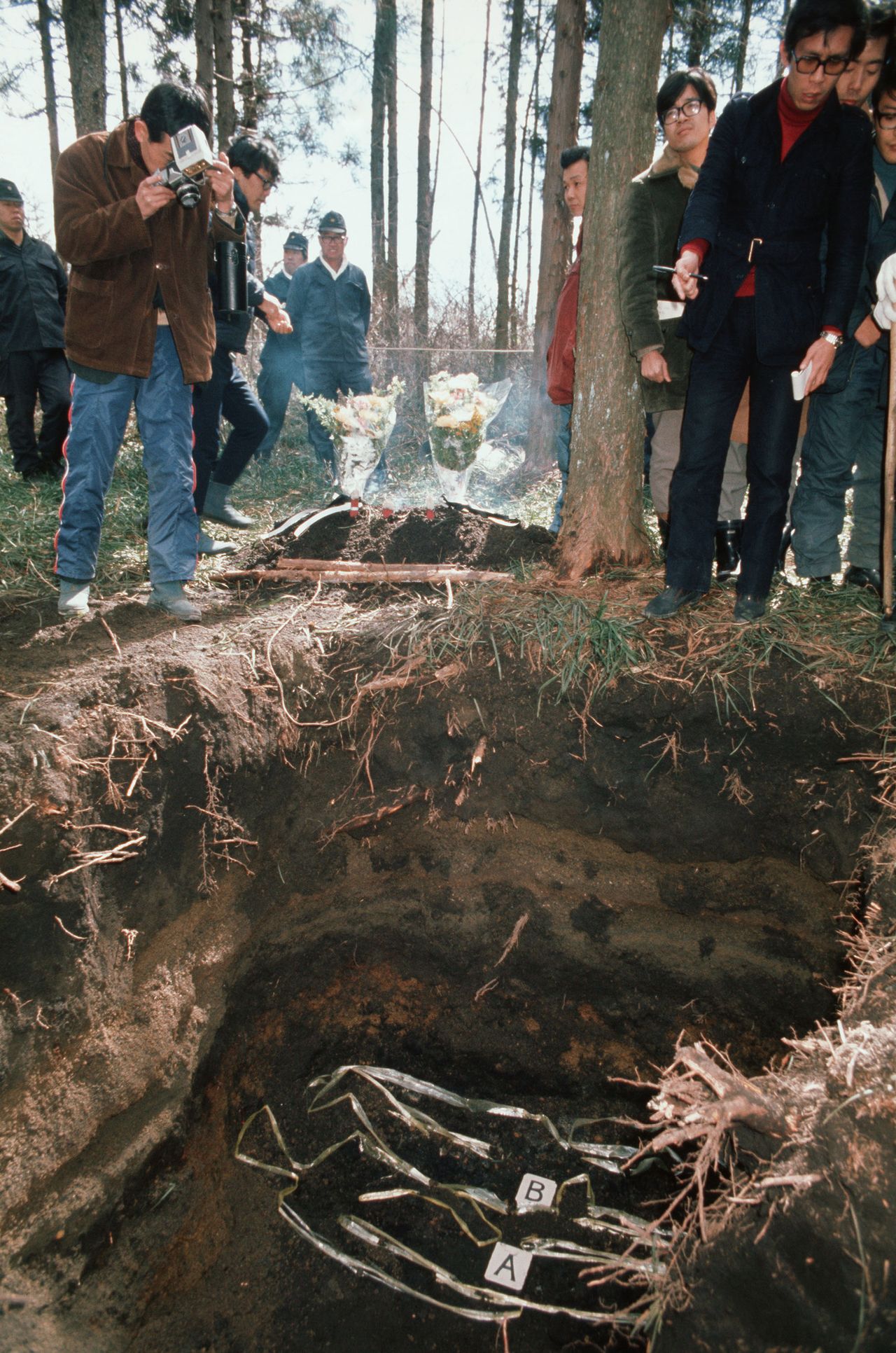 The remains of members killed during violence within the United Red Army. Photograph taken near the Mount Haruna base in Gunma Prefecture in March 1972. (© Jiji)

During the repeated rounds of sōkatsu, four members seized the opportunity to escape one after another. They included the mother of the baby—another woman took the child down the mountain. A group of four, including Mori and Nagata, then left the Mount Haruna base and evaded the police to go via another base to a third at Mount Myōgi, but they were arrested just before leaving this last location. The remaining nine escaped from the Mount Myōgi base and headed across the mountains to Karuizawa. Four of them were arrested at Karuizawa Station when they went out to buy supplies. This left Bandō of the Red Army faction and Sakaguchi, Yoshino, and the Katō brothers of the Revolutionary Left, who ended up at Asama Sansō. 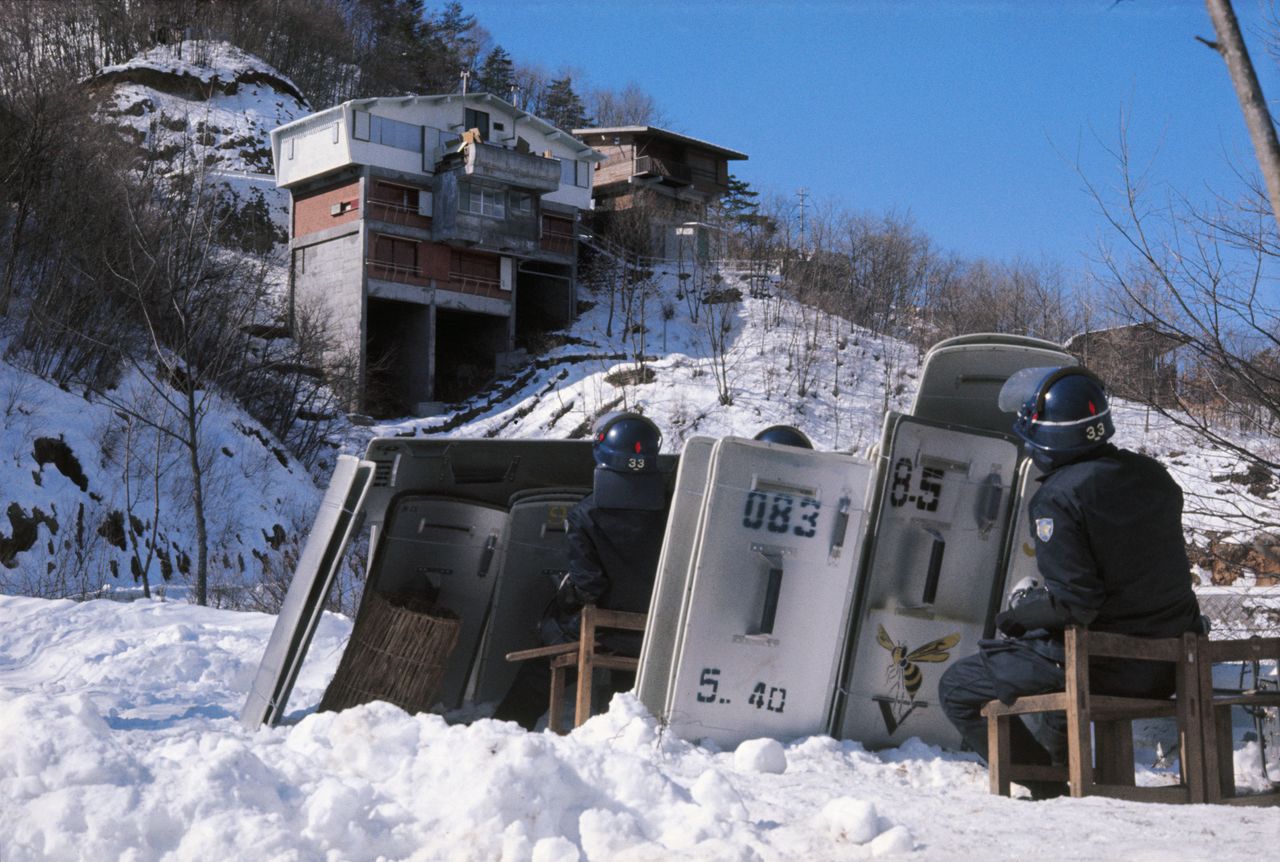 As the hostage situation unfolded, National Police Agency Commissioner Gotōda Masaharu ordered, “Capture all the perpetrators alive. If we shoot them dead, they’ll go on to be seen as martyrs.” The Vietnam War was ongoing and Japanese backing for the United States had led to student movements opposing the war and supporting the Vietnamese people, which had gained broader public sympathy.

Before the Asama-Sansō Incident, there had been voices backing the radical actions of the United Red Army. Afterward, however, the discovery of bodies of 14 purged members made potential recruits to the new left-wing movements think twice. As the wider public turned away, these groups went into decline.

The Red Army faction had members who wanted to take action internationally, ostensibly to establish bases overseas. Tamiya Takamaro led a group of nine in the Yodo-gō Hijack, taking over a JAL airplane on March 31, 1970, and ultimately forcing it to land in North Korea on April 3. 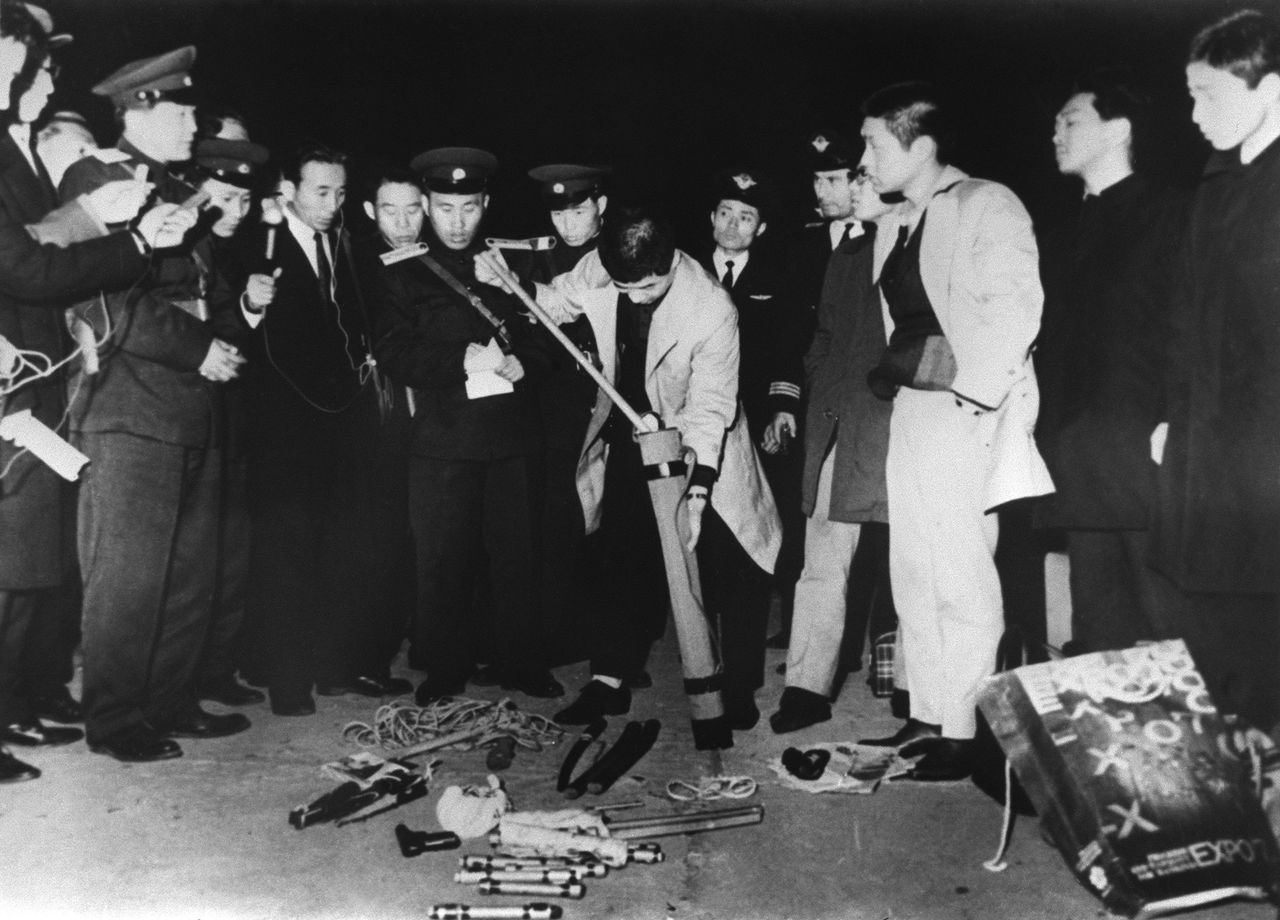 Tamiya Takamaro and other Red Army faction members are disarmed at Pyongyang Airport in North Korea on April 3, 1970, following the hijacking of Japan Airlines flight 351.

Longstanding Red Army faction member Shigenobu Fusako left Japan after clashing with the faction’s leader Mori Tsuneo. She entered a false marriage with Okudaira Tsuyoshi, another leftist, on February 2, 1972, as she could not obtain a passport under her original name, which was known to the authorities, but was able to under the name Okudaira Fusako. On February 28, she left the country to join the Popular Front for the Liberation of Palestine. She founded what later became the Japanese Red Army and instigated the Lod Airport Massacre near Tel Aviv in Israel, an attack on May 30 of the same year by three Japanese radicals in which more than 20 people were killed. Two of the attackers also died, including Okudaira, who killed himself with one of his grenades. The group is sometimes called the second Red Army faction at this stage to distinguish it from the initial incarnation led by Shiomi Takaya.

In December 1974, the group became known as the Japanese Red Army. On August 4, 1975, it occupied the US and Swedish embassies in Malaysia in the Kuala Lumpur Incident. During hostage negotiations, it successfully secured the release of Bandō Kunio, who was undergoing trial for the Asama-Sansō Incident and other offenses. 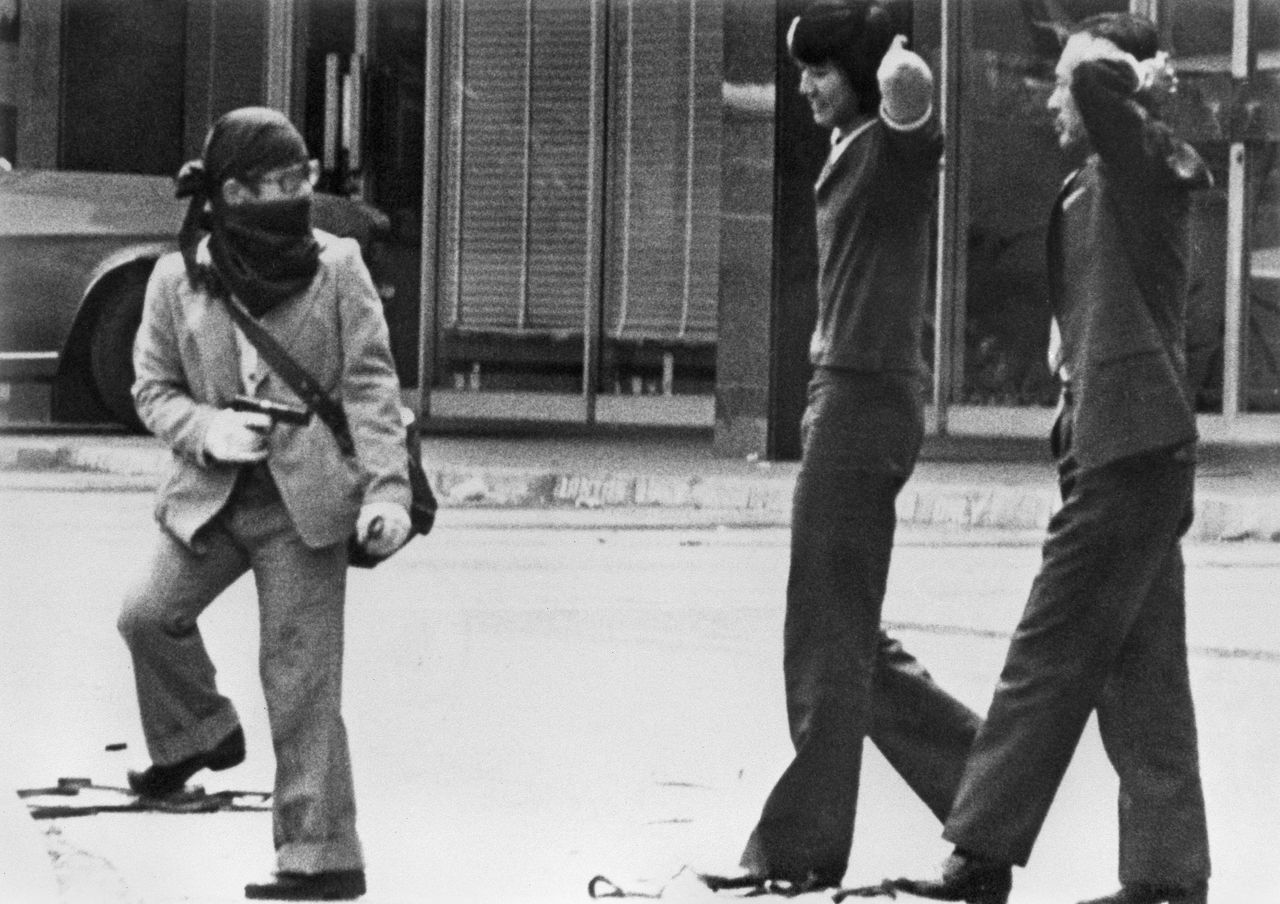 A Japanese Red Army member with a gun and two hostages on August 7, 1975. Five members of the group assaulted the US and Swedish embassies in Kuala Lumpur, demanding the release of imprisoned radicals in Japan. They escaped to Libya after the incident. (© Jiji)

After his release, Bandō remains an internationally wanted criminal. Of the other five men in the Asama-Sansō Incident, Yoshino is currently serving life imprisonment, while the Katō brothers were released from prison and juvenile training school, respectively. Sakaguchi Hiroshi, the leader of the group, rejected release when the Japanese Red Army demanded it during the Kuala Lumpur Incident, stating via an international telephone call, “I won’t go. I’ve decided violence was the wrong way to pursue the struggle.” He was later sentenced to death and is incarcerated at the Tokyo Detention House. However, he will not be executed until Bandō has been arrested and sentenced. The United Red Army incidents remain short of full resolution. 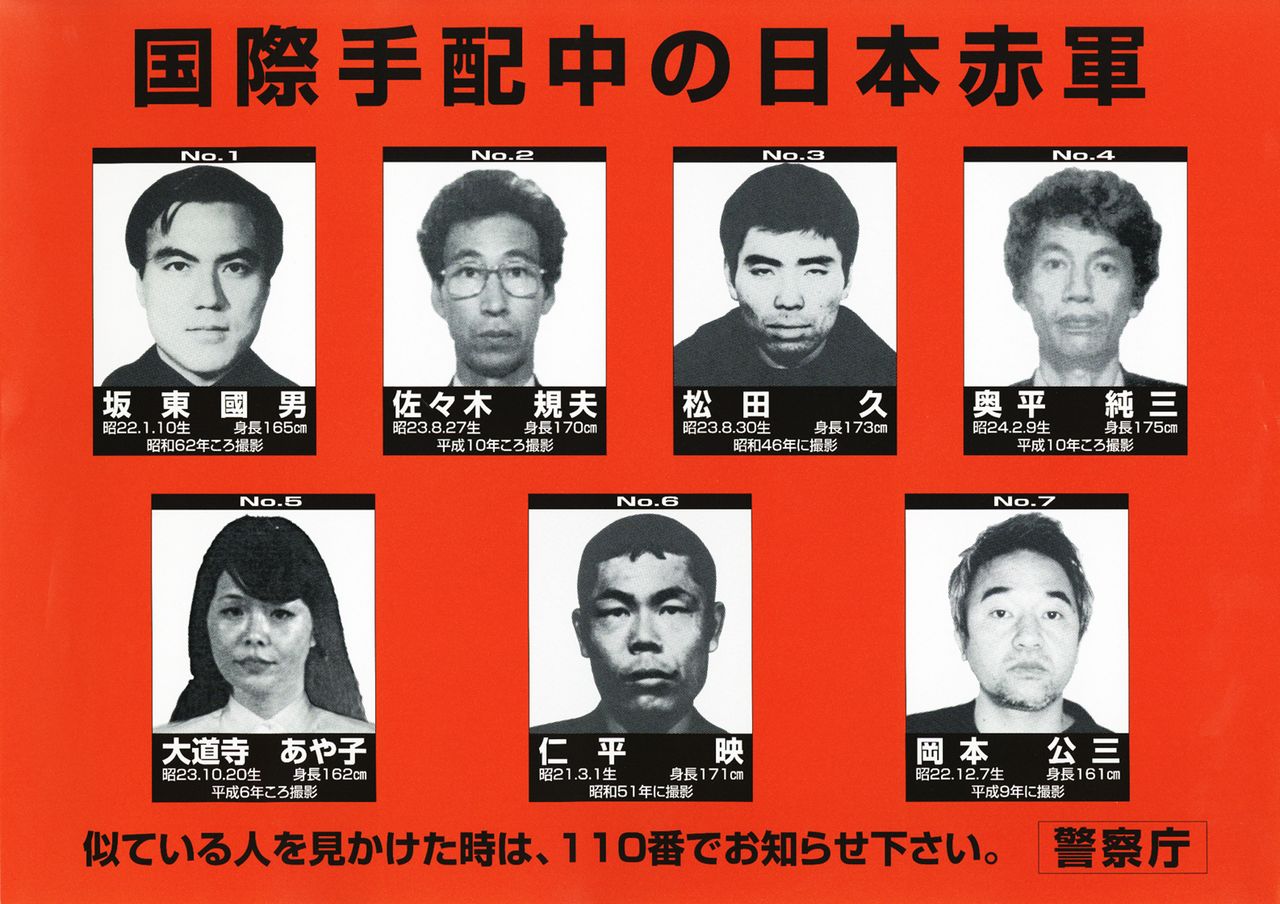 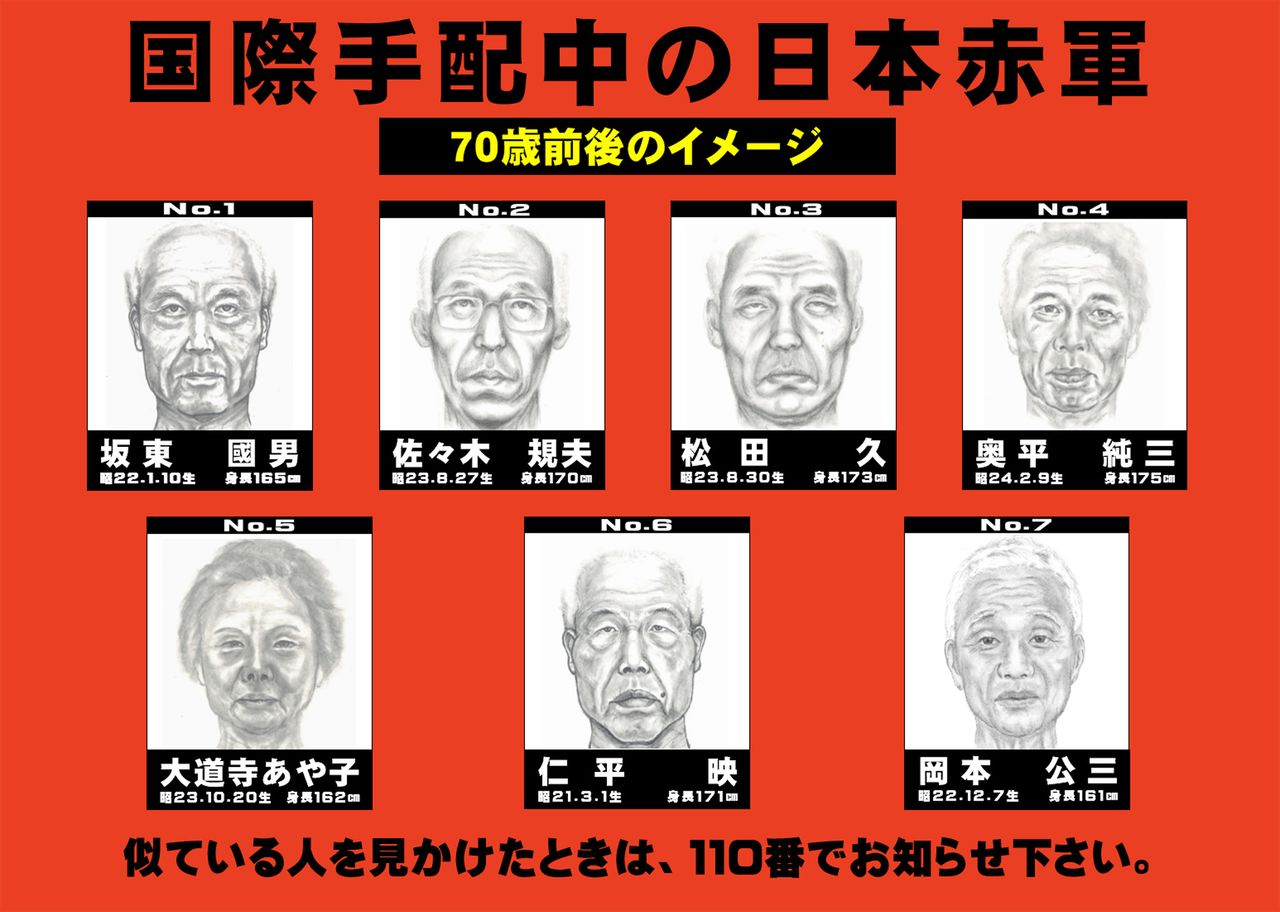