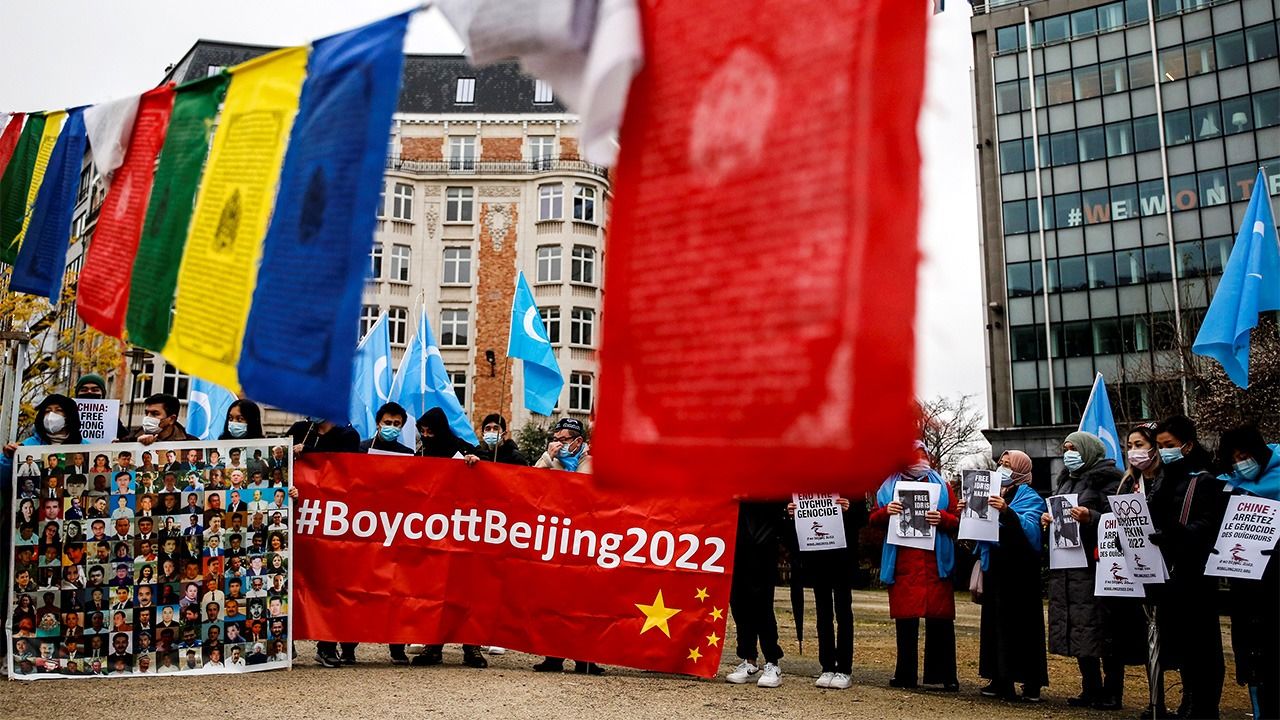 Sports Society World Feb 7, 2022
Athletes at last year’s Tokyo Olympics freely posted their thoughts on social media, but this may not be the case for competitors at the 2022 Beijing Winter Olympics. As the games get underway, China continues to face criticism from around the world for its human rights violations against ethnic minorities and its suppression of speech. How freely will athletes in Beijing be able to express themselves?

“Use Your Voice When you Get Back Home”

One month before the 2022 Beijing Winter Olympics were set to kick off, the international organization Human Rights Watch sponsored a seminar on the theme of communications for Olympic athletes. Significant concern was expressed about the consequences for athletes if they were to speak out about political issues.

Rob Koehler, former deputy director general of the World Anti-Doping Agency and now director general of Global Athlete, an athletes’ rights advocacy group, stated bluntly: “Silence is complicity and that’s why we have concerns. So we’re advising athletes not to speak up. We want them to compete and use their voice when they arrive back home.”

Noah Hoffman, an American cross-country skier and two-time Olympian, similarly shared, “My hope for athletes there is that they stay silent because they are not only going to be prosecuted by the Chinese authorities, but they could also be punished by the IOC.” Hoffman also claimed that his “teammates are being shielded from questions on these issues for their own safety.”

Finally, Wang Yaqiu, a researcher for Human Rights Watch, added that “Chinese laws are very vague on the crimes that can be used to prosecute people’s free speech.” Wang warned that the state had considerable discretion to charge people with crimes if their speech was deemed inappropriate.

Leaving the Smartphones Behind

Olympic athletes are also wary of the security of their electronic transmissions while in China. According to one Dutch newspaper, the Netherlands Olympic Committee asked its athletes not to take private phones or computers to Beijing. A spokesperson for the Dutch Olympic Committee noted concerns about Chinese intelligence activities and admitted that cyber security was one of the risks facing athletes travelling to China.

Services popular in Japan and Western countries such as Twitter, Google, Line, Instagram, and Facebook are generally unavailable in China. People in China instead use Chinese versions of these services, such as Sina Weibo instead of Twitter, and WeChat for messaging. These platforms are constantly monitored and censored by the Chinese government.

According to Kyōdō News, the services of the major international digital companies will be available at designated Olympics facilities. Unease that social media communications of athletes in Beijing will be censored is nevertheless hard to shake, and electronic freedom of expression remains a major concern.

In November last year a prominent Chinese tennis player, Peng Shuai, claimed in a Sina Weibo post that she had been coerced into sexual relations by Zhang Gaoli, a former Chinese vice premier. It was not clear who made the original post or why it was subsequently deleted, but the whole situation uncomfortably highlighted the opacity of China’s approach to domestic information control. Making matters worse, Peng then subsequently disappeared for two weeks, prompting international speculation about her safety.

The Chinese government and other Chinese media then suddenly began to report that Peng was safe. IOC President Thomas Bach even held a video call with the three-time Olympian. However, the IOC provided no convincing explanation as to how it managed to make contact with her. As the issue is no longer in the spotlight, we still cannot be totally convinced that she is safe or free.

Peng Shuai has not been able to leave the country and did not attend this January’s Australian Open in Melbourne, one of the four major tennis tournaments. At a press conference during the tournament, Spanish player Garbine Muguruza told the media, “I think it’s going to be very difficult to find the real truth and for her to be able to freely talk. I don’t know what’s happening—what’s the issue there.” Like Muguruza, many have lingering doubts over Peng’s fate.

Athlete Expression During the Olympics

What restrictions will be placed on athletes’ expression and activities during the Games? This is a question not only pertinent to the 2022 Beijing Games. After all, the by-law to the Olympic Charter’s Rule 48 states clearly that:

This means that athletes should not write columns for newspapers during the tournament, and coaches should not appear on television to provide commentary. Ostensibly, this is to prevent players and coaches using the media to criticize opponents or complain about referee decisions, which could disrupt the tournament and cause antagonism. This has been true for all Olympic games.

However, as social media has proliferated alongside the use of smartphones, the implementation and interpretation of this by-law has evolved. At the 2008 Beijing Olympics, athletes could publish blogs if they wrote in a diary style. There were no particular problems with athlete communications during that Olympics. The 2012 London Olympics then came to be known as the “Social Media Olympics” due to the sudden spike in the use of smartphones and apps by athletes.

Since then the IOC has actively encouraged athletes to use social media, and today hundreds of millions of users of these networks follow Olympians. The athletes themselves have become a medium through which to promote the Olympics. At the Tokyo Olympics, social media interaction by athletes conveyed to the world what was going on in the Olympic village, where the press was not allowed, showing a different side to the games.

On the other hand, the dark side of the Olympics has also emerged through this new access to athletes. For example, a track and field athlete from Belarus posted on social media her dissatisfaction with the scheduling of her event during the Tokyo Olympics. This angered the authoritarian Belarusian regime, which demanded that she return immediately to her home country. However, she sought help at Haneda Airport and applied for asylum, eventually defecting to neighboring Poland. This highlighted how some nations place pressure on athletes in service of the Olympics.

Rule 50 of the Olympic Charter states that “No kind of demonstration or political, religious or racial propaganda is permitted in any Olympic sites, venues or other areas.”

However, the IOC relaxed the implementation of this rule in the run up to the Tokyo Olympics. The increasing number of athletes globally, including in the United States, using sports events to openly protest discrimination and racism prompted the IOC to establish new guidelines. The IOC now allows political gestures “prior to the start of competition” and at the entrance and introduction of athletes at the competition venues. Protests on the medal podium are still prohibited, however, and political gestures cannot be disruptive or targeted “directly or indirectly, against people, countries and organizations.”

This, however, could still present a problem for the Chinese government as competition gets underway in Beijing. The Chinese government has attracted international condemnation for its repressive policies and human rights violations in Xinjiang. In Hong Kong, the owner of a newspaper critical of the government in Beijing was arrested, and prodemocracy media outlets have been forced out of business one after another.

The United States, Britain, and other countries have responded by openly criticizing Beijing’s authoritarian direction. They have also announced a “diplomatic boycott” where government officials will not attend the opening and closing ceremonies of the 2022 Games. Japan has also decided not to send cabinet ministers.

How will both the IOC and the Chinese government respond if athletes join politicians in criticizing Beijing’s policies? They could expel the athletes from the Games and/or force them to leave China. However, this could rapidly turn into a diplomatic issue.

The Omicron variant of COVID-19 has now been confirmed in Beijing, raising concerns about the spread of infection. What the Beijing government and IOC organizers truly fear spreading, however, is athletes expressing their political views about China. At the same time, any infringement of athletes’ freedom of expression will constitute a stain on Olympic history. The Olympics are supposed to represent an opportunity for the youth of the world to deepen friendships across borders. The Olympic spirit itself is supposed to support “the establishment of a peaceful society that emphasizes the preservation of human dignity.” It remains to be seen whether these lofty goals will be realized in Beijing.

(Originally published in Japanese. Banner photo: Activists call for the boycott of the Beijing Olympics near the European Union headquarters in Brussels, Belgium, on January 4, 2022. On January 23, Uyghurs demonstrated in front of the Turkish Olympic Committee building in Istanbul. © Valeria Mongelli/Hans Lucas via Reuters Connect.)