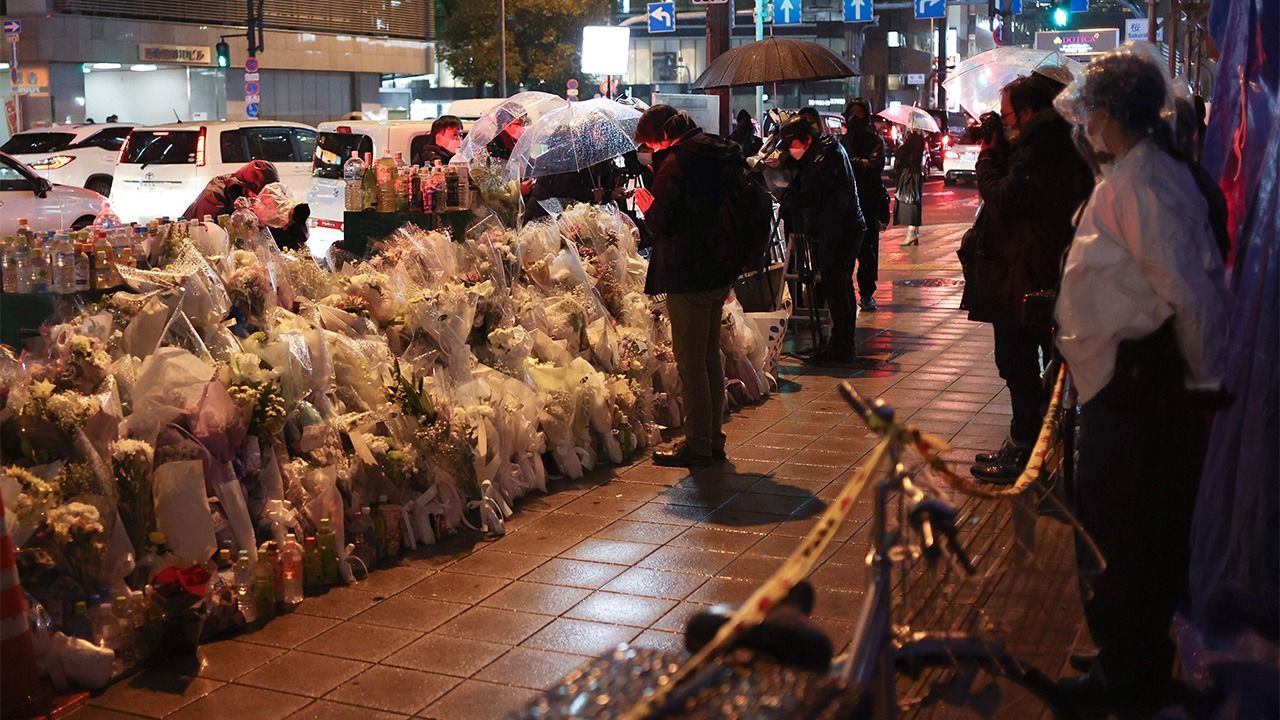 Why are Indiscriminate Mass Murders On the Rise in Japan?

Society Health May 26, 2022
There have been several recent instances of murder-suicides, where an individual commits suicide after killing or injuring complete strangers. From the perspective of psychiatry, the author examines why this is happening more often nowadays and what drives offenders to kill.

Murder-suicides have been occurring more and more frequently recently and even seem to inspire copycat attacks. In psychiatric medicine, murder-suicide describes the act where suicidal individuals, in despair because their lives are not working out, take others down with them because they do not want to die alone or because they are afraid of committing suicide. This term, which is not a diagnosis or the name of a mental disorder but describes a phenomenon, came into use in English- and French-speaking countries in the 1990s and became more widely known following the 1999 Columbine High School massacre in Colorado.

A Wave of Murder-suicides

In Japan, the murder-suicide phenomenon began attracting more attention with the June 8, 2001, attack on the elementary school attached to Osaka Kyōiku University, when eight children were killed. After his arrest, the attacker, a 37-year-old man, confessed that he had unsuccessfully attempted suicide several times. He had become thoroughly fed up with life and wanted to be caught so as to receive the death penalty. His statements to investigators suggested that he had been suicidal; in fact, he had tried to hang himself with a necktie the week before his stabbing spree. 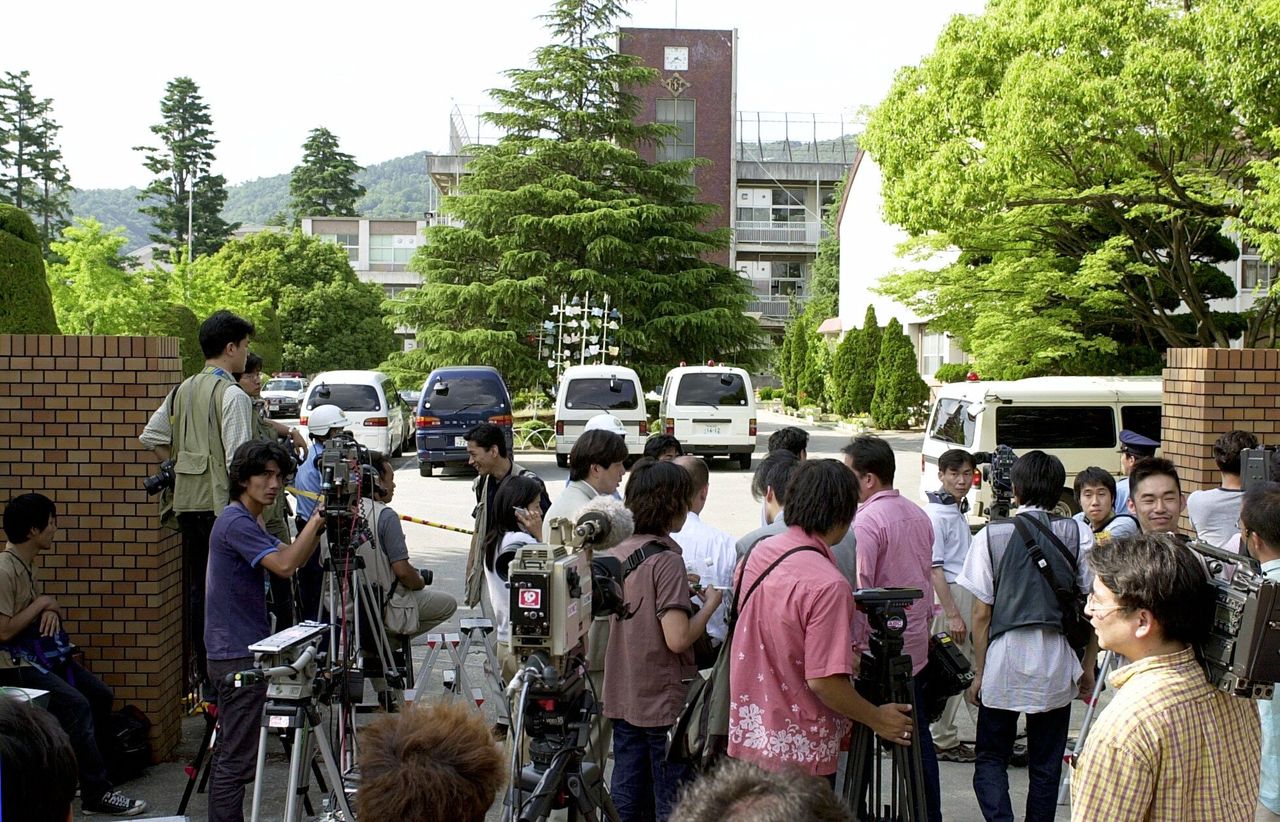 Members of the media crowd around the Osaka Kyōiku University school’s entrance. A man armed with a knife entered a classroom and slashed pupils and teachers. Eight children died and over 20 people were injured. (© Jiji)

In June 2008, a 25-year-old man rammed a truck into a crowd crossing a street in Tokyo’s Akihabara district, killing seven. The man, increasingly cut off from society, had begun thinking of committing suicide a few years prior to the incident, envisioning a scenario where he killed himself driving a car on a road in his native Aomori Prefecture. Absenting himself from work to carry out his plan, he headed for Aomori by car, sending a group email to his friends saying that he intended to die by driving his car into a truck, and calling his mother to announce that he was going to kill himself. He did eventually get to Aomori but, drunk at the wheel, he ran his vehicle up against a curb, which stopped him in his tracks. To a friend he called later, he confessed that he had flubbed his suicide plan. 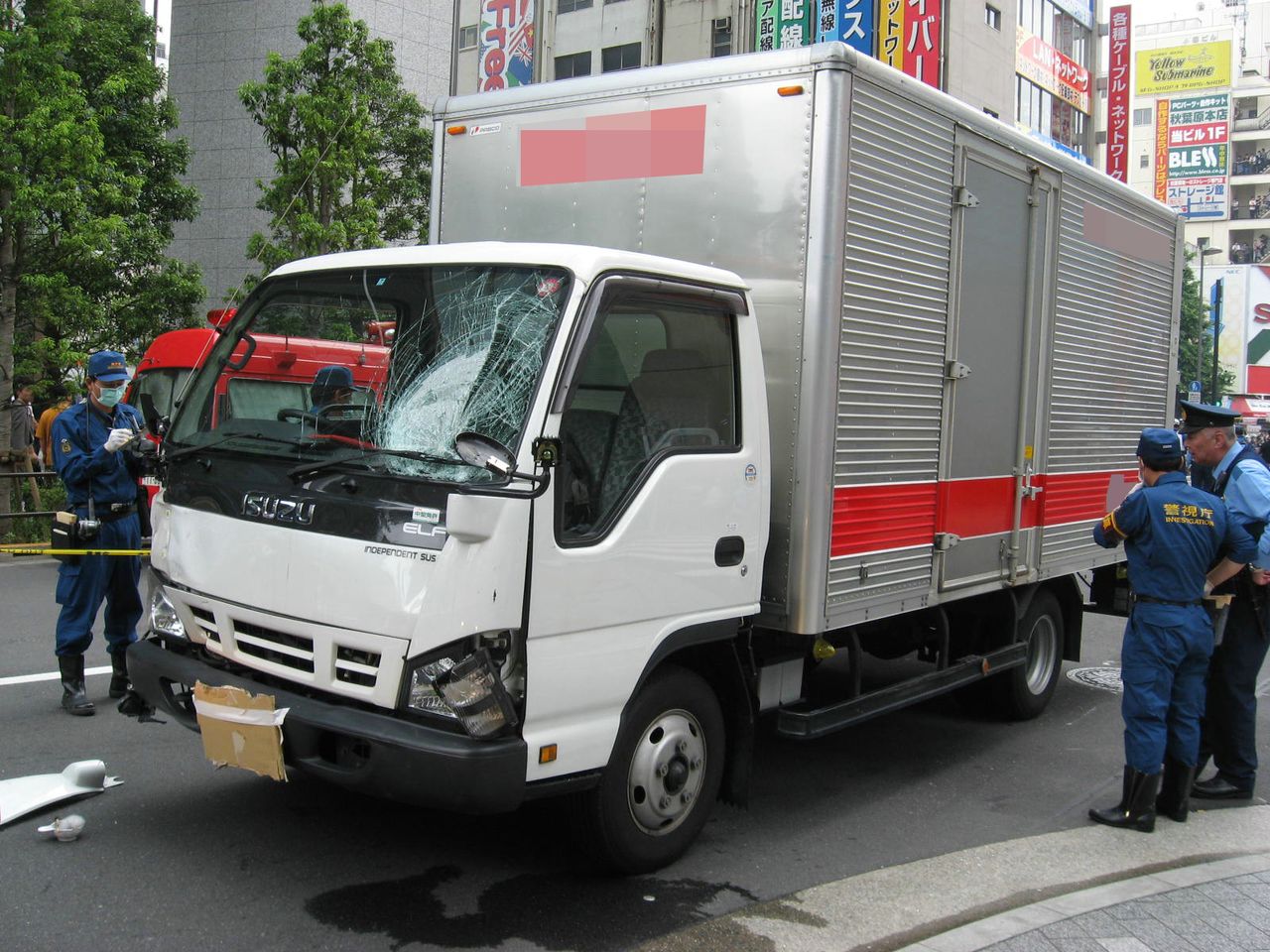 This incident is likely to have been triggered by a series of attacks that killed two people in Tsuchiura, Ibaraki Prefecture, just a few months before, in March 2008. The 24-year-old perpetrator in that case told investigators that he had aimed to kill several people so as to be sentenced to death. (Capital punishment in Japan tends to be handed down only to perpetrators of particularly heinous crimes, including multiple murders.) Claiming that he saw no point in living, he had thought of suicide at one point but was afraid he might not succeed and would only end up feeling pain. In his mind, the quickest way to death was to murder others so that someone else would kill him. This may be a case of killing in order to be killed, but it is clearly a type of murder-suicide.

Similarly, the arson of an Osaka video shop in October 2008 that killed 16 people was a typical murder-suicide, with the arsonist admitting that he had deliberately set the fire because he was “tired of living.”

Murder-suicides have been even more frequent over the past few years. In May 2019, a 51-year-old knife-yielding man targeted students waiting to board a school bus in Kawasaki, Kanagawa Prefecture. After stabbing several people, including a 12-year-old girl and the father of another student, who both died at the scene, he knifed himself to death.

Another wave of similar incidents has taken place since 2021. In October that year, a 25-year-old man attacked passengers and set fire to a commuter train in suburban Tokyo, wounding several people. The man, who was nearly penniless, said after being arrested that he had hoped for the death penalty if he killed at least two people. 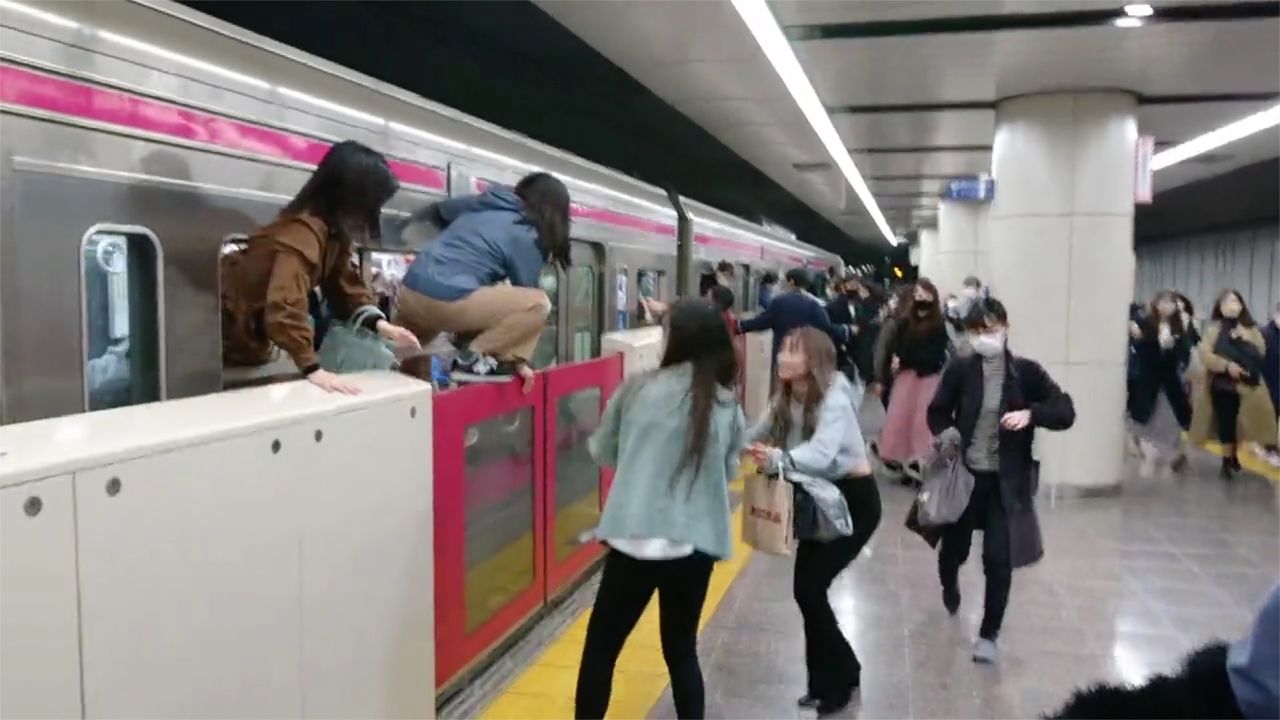 Passengers escape the train through the windows on October 31, 2021, in Chōfu, Tokyo. (© Reuters)

And in Osaka in December, a 61-year-old man spread gasoline and set alight the mental health clinic where he had been a patient, taking 26 people to their deaths. A security camera inside the clinic showed the man running into the flames, barring the exit and pushing back patients attempting to escape. The perpetrator also died, in yet another typical example of a murder-suicide. 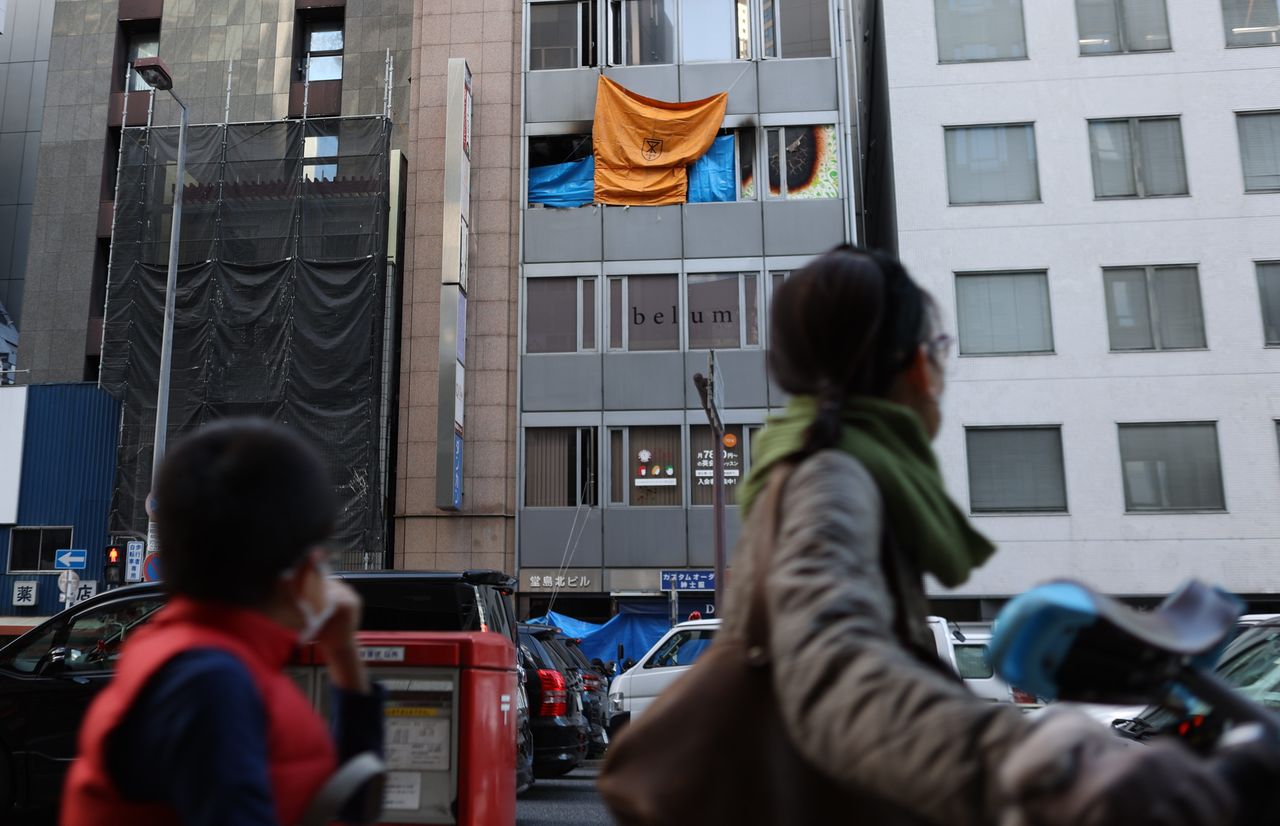 Passersby look up at the Osaka clinic on December 18, 2021, the day after the arson attack. (© Jiji)

On January 15, 2022, a 17-year-old stabbed two students waiting to enter a University of Tokyo campus for an entrance exam and a 72-year-old passing by the site. Also in January, a 66-year-old resident of Saitama Prefecture summoned the doctor who had been caring for his aged mother before her death, holding him hostage in his home and shooting him to death with a shotgun. 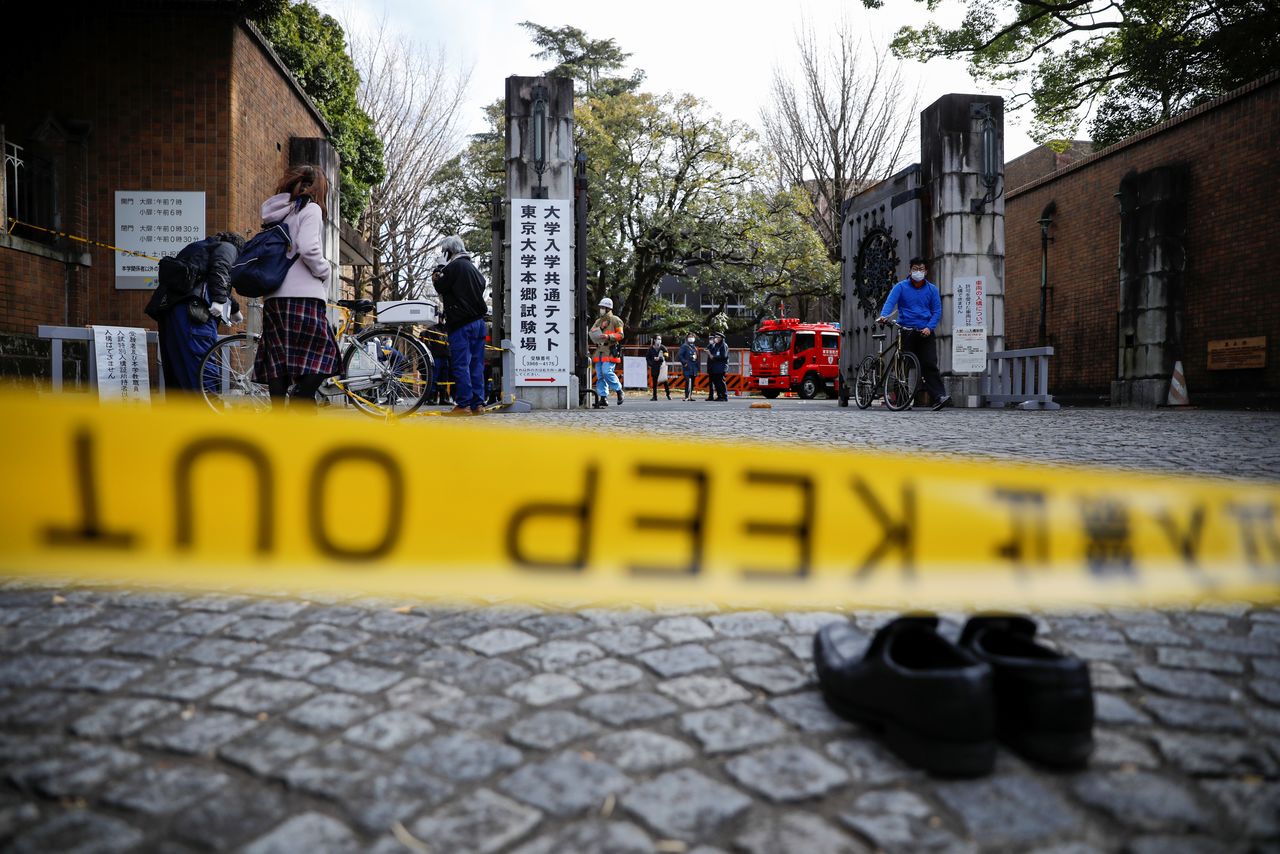 Police examine the site of the stabbings outside the University of Tokyo campus. (© Reuters)

Both the boy and the man, despairing of their futures, had thought of suicide, the boy because of poor grades and the man bereft by the loss of his mother.

In all the examples described above, the perpetrators were in despair because their lives had not gone as planned. They had become suicidal as a result of long-term dissatisfaction and isolation from society. They were also confronting some kind of difficulty—the loss of a job or a loved one, or a financial setback. Concluding that their lives were no longer worth living, they began planning murder-suicide.

This brings us to the question of why such people commit mass murder, taking others with them, rather than killing only themselves. To begin with, suicide is usually a reversal of the impulse to attack others, with the suicidal individual feeling anger or hate toward an external target. However, would-be suicides hesitate to communicate their feelings directly or feel that nothing would change even if they did so. Therefore, they experience powerlessness and direct the object of their emotions inward. This becomes clear from the fact that some suicides name their oppressors in suicide notes.

The reverse can also easily occur, when suicidal individuals redirect the object of their negative emotions toward others, resulting in murder-suicides.

The dividing line between a suicide and a murder-suicide depends entirely on the strength of the individual’s desire for revenge. The stronger that desire, the more the individual will start thinking, ”Why should I go to my death being the only one feeling miserable?” or ”I don’t want to be the only one to die,” with the desire to lash out in some way growing proportionately stronger and setting in motion a murder-suicide plan.

A Tendency to Blame Others

The more frustrated and isolated a person is, the stronger the desire for revenge grows. Such individuals believe that it is the fault of others—or of society as a whole—that their lives are not going well, ducking responsibility for anything that goes wrong.

Ironically, this tendency to blame others has its roots in the call for taking greater responsibility for oneself that began growing in the early 2000s. That is because the public were being called upon to be harder on themselves and take responsibility for their actions. In particular, people who lacked the ability or the will to make the necessary effort found it difficult to accept this line of thinking; they wanted to believe that it was not their fault that their lives were not panning out. Even so, when faced with the cold realities of life their frustration increased, and their only alternative was to seek to pin the reason for their dissatisfaction on some factor outside of themselves.

This is a tendency we see everywhere in Japanese society today. Everyone, from politicians and business leaders on down, seeks to place the blame elsewhere when things do not go according to plan. Wanting to believe that one is not wrong is only human, but the rise in people who only blame others may be responsible for the murder-suicides prevalent today.

We need an expanded safety net to help people who have experienced loss so that they do not sink further into despair, and more outreach points where suicidal individuals can turn to, to help prevent murder-suicides.

But underlying the psychology of murder-suicides is the tendency of many people to blame society or others for their troubles. It is fair to say that most Japanese today have this mindset, and with this attitude so rampant in our society, it is urgent to stamp out this “disease.” Otherwise, more murder-suicides will inevitably occur.