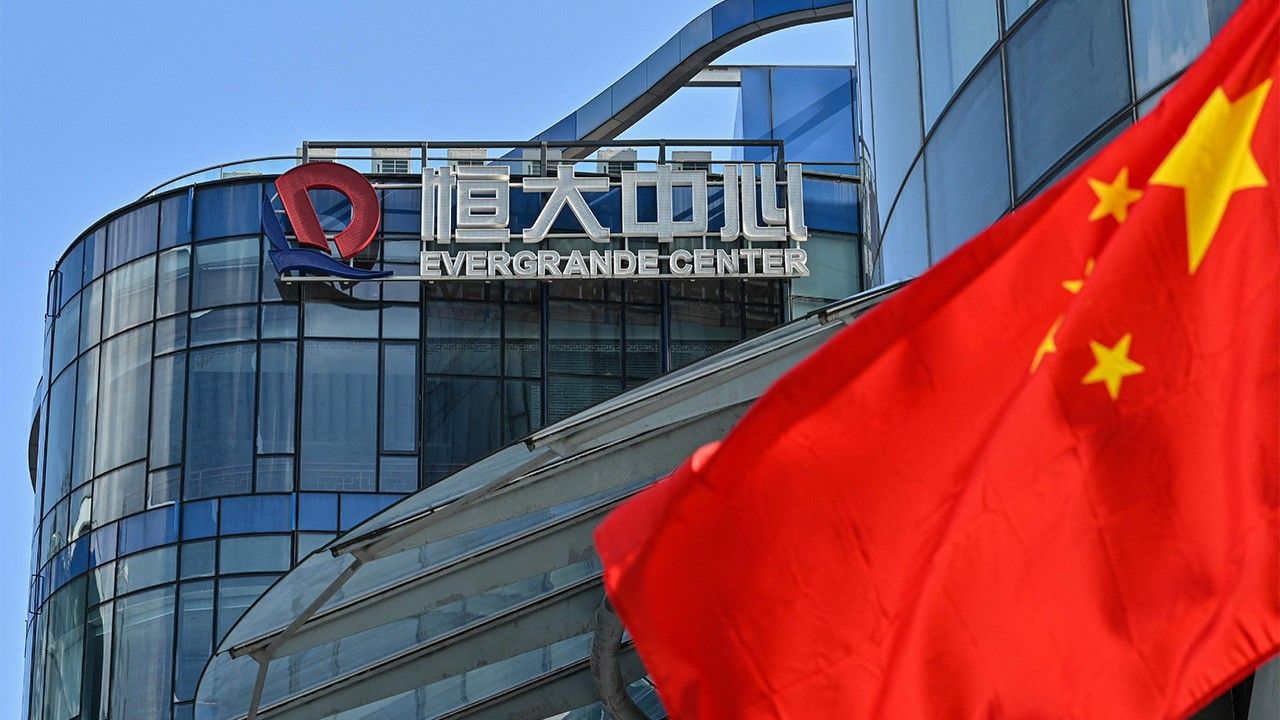 The Chinese Economy in 2022: Issues Mount as Beijing Searches for Stability

Politics Economy Mar 14, 2022
After “opening up” its economy after decades of isolation in 1978, China achieved average annual growth of 9.9% for the next 30 years to become the world’s second largest economy. Recently, however, this momentum has stalled. What are the prospects for the Chinese economy going forward? How will this impact Japan and the rest of the world?

China recorded annual real GDP growth of 8.1% in 2021, one of the highest rates in the world. For most countries this would be an enviable achievement. However, for China, this return to high growth was largely a consequence of the rebound from real growth of a meager 2.2% in 2020. This is not surprising given the large-scale lockdowns and restrictions on movement implemented to suppress COVID-19 that year. Nevertheless, the annualized growth rate for the 2020–21 two-year period was still only 5.1%—lower than the 6.0% recorded in 2019. At the time, this was the lowest mark recorded in almost two decades.

Furthermore, compared to the same periods in 2020, China recorded annualized growth rates of 18.3% and 7.9% in the first two quarters of 2021, respectively, but only 4.9% in the third and 4.0% in the fourth. The cause of this “strong start, weak finish” pattern of growth was not only the rebound effect, but fiscal and economic management choices made by the Chinese government. By the end of the year, the government switched to emphasizing the need to support the economy more aggressively. 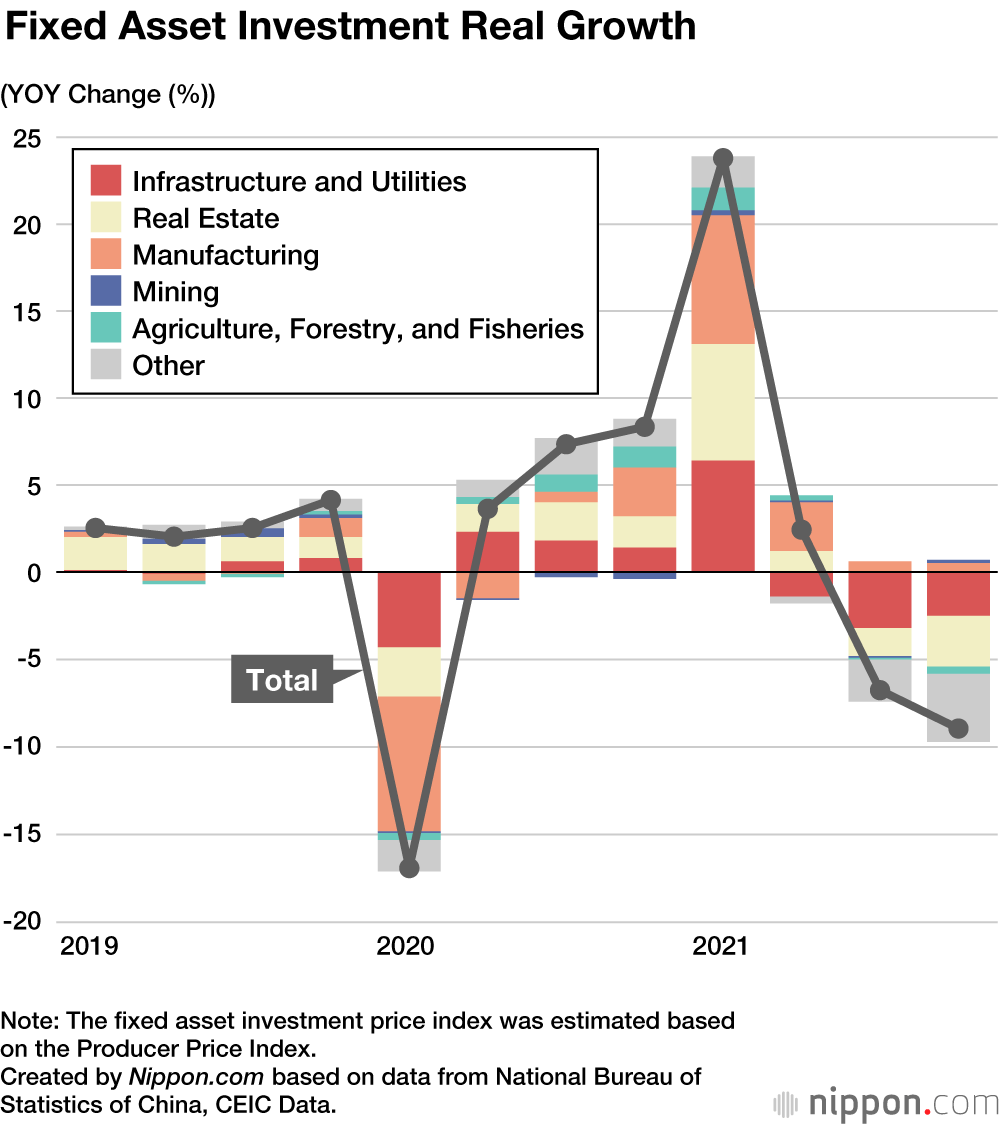 After recovery throughout 2020, the slump in infrastructure investment in late 2021 is notable. Weakening fiscal stimulus across China’s complex ecosystem of public financing platforms was a key driver of this slump. In China, fiscal stimulus comes not only from the general government budget, but from social security funds and state-owned capital management budgets, infrastructure spending through local-government financing platforms, and funding from special accounts put aside for construction and other government-guided projects. Taken together, aggregate deficit spending appeared to narrow from 17.5% of GDP in 2020 to 16.5% in 2021. New issuance of special bonds by local governments, which mainly facilitates infrastructure construction, also fell by 0.5% in 2021. Infrastructure construction was delayed as bond issuance did not take place until the second half of the year in 2021 as part of efforts to curb local government debt. This nevertheless put downward pressure on the economy.

Real estate investment also fell sharply in the second half of 2021, registering an estimated negative 7% year-on-year for the third quarter in real terms, and minus 9% for the fourth quarter. The government implemented strict lending regulations to cool the overheating real-estate market in 2021 with a view to dampening speculation in particular. Believing it needed to promote the mindset that housing should be for living, not for investing, the government introduced a “three red lines” policy in August 2020. This policy aimed to cap ratios of liability to assets, net gearing, and cash to short-term debt. It then bolstered the policy in January 2021 with a cap on the percentage of total loans banks could make to the real-estate sector. The resulting squeeze on developers’ cash flow combined with a decline in real-estate investment was, however, a precipitating factor in the massive Evergrande Group’s debt default during the year. This suggests that the Chinese government is committed to prioritizing the stabilization of consumer spending and reduction of future financial risks over short-term economic growth.

Consumer spending also followed the falling pattern in 2021, although the causes are more complex. In addition to the rebound effect driving high spending early in 2021, subdued growth in the second half can be attributed to inflation depressing the growth of real household income, decreased production and sale of automobiles due to semiconductor shortages, and reduced consumer spending on transportation and entertainment due to the government’s pandemic-related restrictions. The cost of suppressing the spread of COVID-19 has been economic slowdown.

Finally, exports also followed the same falling pattern. While Chinese exports still expanded by an annualized 10% year-on-year in the second half of 2021, the above-mentioned slowdown in domestic demand meant that import growth essentially stagnated in the second half of the year. The contribution of net exports to China’s growth are now even more important than ever.

Given the choices Beijing has made in battling COVID-19 and in economic and fiscal management, and the impact of these choices on economic activity in the second half of 2021, it is possible to interpret this as China prioritizing reform over short-term economic growth considerations. However, the rhetoric coming out of the Central Economic Working Conference held in December 2021, with its undeniable focus on economic growth “stability,” tells a different story. Critically, in the fourth quarter of 2022 the twentieth National Congress of the Chinese Communist Party will decide the supreme leadership of the CCP and China. A special emphasis on economic growth stability is critical for Xi Jinping to secure a third term as the General Secretary of the CCP’s Central Committee. The official announcement of outcomes from the CEWC therefore contained an emphasis on steadiness, with the Chinese character denoting stability appearing 25 times.

Stabilizing economic growth at a high level as the CCP envisions requires the adoption of “aggressive fiscal policy” in 2022. CEWC announcements emphasized “fiscal spending in moderation” for 2021, but for 2022 the CEWC removed “moderation” and added the goal to “accelerate spending.” While the ratio of budget deficits to GDP fell in 2021, it is likely that the government will not oversee another drop in 2022. For example, the government will encourage the issuance of special local government bonds for infrastructure to support the economy throughout the year instead of just in the second half.

The CEWC does not envisage monetary policy to be as aggressive as fiscal policy, and interest rates cuts will be modest because of lingering inflationary pressures and fears of real-estate speculation. Nevertheless, Beijing will still need to be “flexible” in its monetary policy so as to “maintain sufficient liquidity.” For example, the government plans to support corporate financing by lowering the Cash Reverse Ratio for banks. The government also signaled an intention to cut interest rates more aggressively if the economic slowdown continues.

The Chinese government is also looking to assuage concerns and confusion over its priorities triggered by its actions in 2021. One area it has sought to clarify pertains to Xi Jinping’s “common prosperity” agenda. Ostensibly focused on more equitable redistribution of China’s growing economic pie, the CEWC nevertheless made it clear that “common prosperity” will be implemented through a controlled process over a long period of time. Essentially, the government is emphasizing growth first, distribution later.

China’s energy transition policies were also “clarified.” China’s State Council in November 2021 announced plans to steadily reduce carbon emissions after they peak in 2030, with a view to achieving “carbon neutrality” by 2060. However, the CEWC one month later noted that it was “impossible to achieve everything all at once” and ruled out the implementation of radical energy transition policies. The government was, after all, wary of power shortages caused in some areas in autumn 2021 by a drop in wind and hydroelectric power generation due to weather factors. Since then, stability of the power supply has become a higher priority than reducing coal usage.

Restrictions on lending to real-estate developers have also been relaxed somewhat following the initial implementation of the “three red lines” policy. Since October 2021, bailouts through state-owned enterprises and financial institutions were restarted to ensure that further developer failures would not lead to financial crises or disadvantage homebuyers and real-estate suppliers. Socioeconomic and political stability is clearly more important for Beijing than promoting market principles of individual self-responsibility for risk-taking.

China’s growth rate is predicted to be around 5% in 2022. Japan’s economic dependency on the Chinese market means continued robust Chinese economic growth is important, but the world’s second-largest economy is also crucial for the global post-COVID-19 economic recovery. On the other hand, if economic reforms are postponed because of Beijing’s emphasis on socioeconomic and political stability, there is a growing fear that China will inevitably suffer even greater economic setbacks further down the track.

The Chinese government is aware of the need to balance sustainable growth with high-quality development over the long term. Beijing also emphasizes that it will provide fiscal and financial support to areas where it can help alleviate structural imbalances. In particular, it is looking to support the development of small and medium-sized enterprises and high-tech industries, construction of new infrastructure such as 5G and cloud computing, and new sources of energy.

Nevertheless, concerns remain. There have already been delays in modifying a fiscal structure strongly reliant on income acquired from transfers of land-use rights. The government had planned to introduce a “real estate tax” equivalent to a property tax, but this may now be a less ambitious measure given the emphasis on growth stability. The government also still provides “implicit guarantees” to its state-owned enterprises, while “noncommercial” considerations, including those associated with socioeconomic and political stability, still cloud fair and transparent market operations. After leadership is consolidated for the next five years in the twentieth National Party Congress, whether there is a shift back to emphasizing reform will be of crucial economic importance for the Japanese and global economies.

In addition to the reform/growth stability dilemma, a dilemma surrounding COVID-19 continues to affect China. The highly infectious Omicron variant is spreading sporadically in China, and while less serious than earlier variants, debate in China remains over whether to shift to prioritizing the economy or to continue the “Zero COVID” elimination policy. Balancing COVID-19 suppression with economic growth is a difficult task for any country, but since China has a large economy that is at the core of global supply chains, Beijing’s COVID-19 approach will also have a weighty impact on the global economy.