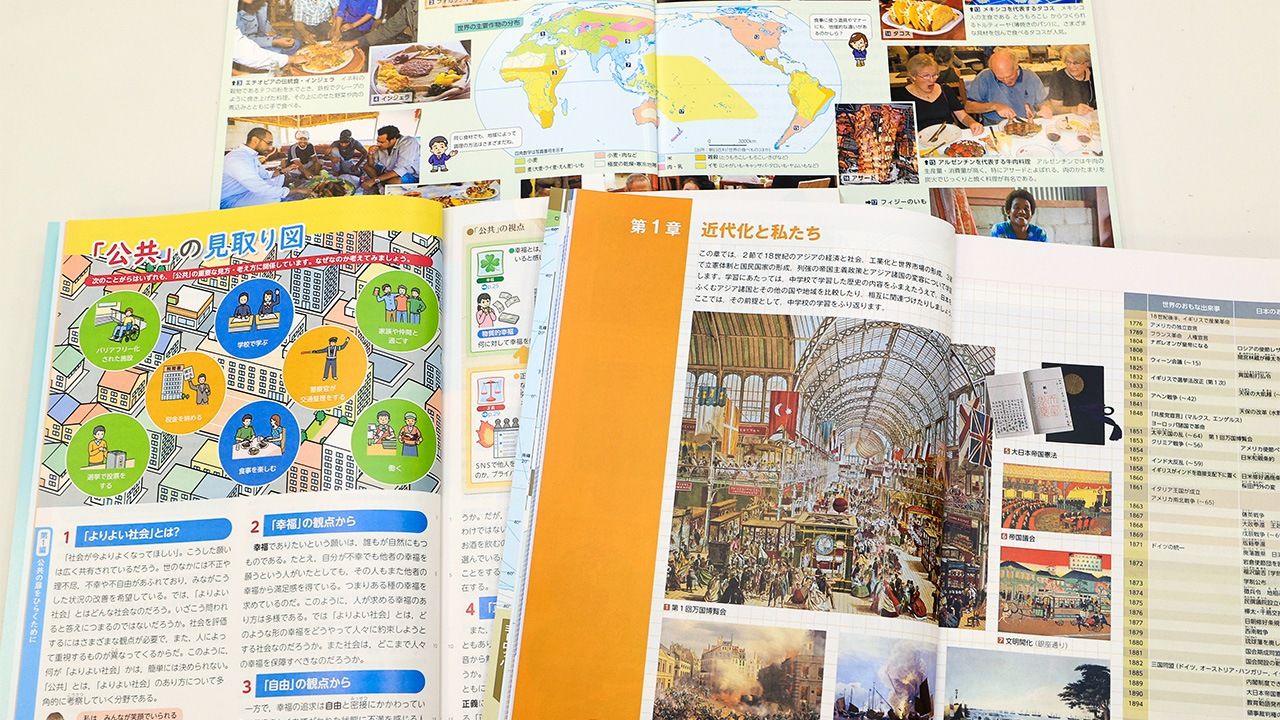 Japan’s high school history curriculum is undergoing an exciting change. Starting in April 2022, high schools throughout Japan will offer a new compulsory course that seeks to integrate Japanese and world history, fundamentally altering the way both subjects are taught.

The basic curriculum for Japanese elementary and secondary schools is outlined in the Courses of Study, a set of guidelines drawn up by the Ministry of Education, Culture, Sports, Science, and Technology (MEXT). Under the old guidelines for high school social studies, there were just two compulsory courses, world history and contemporary society. In the latest guidelines, these are replaced by three new required subjects: rekishi sōgō, or modern and contemporary history; chiri sōgō, or geography; and kōkyō, or civics (literally, “public”). Together, the three courses are designed to cultivate a balanced understanding of Japan and the world from a chronological, spatial, and social perspective.

As described in MEXT’s curriculum guidelines, modern and contemporary history deals with the modern history of “the world and Japan within the world,” from the eighteenth century to the present. The aim is for students to acquire “a sweeping and interactive grasp” while developing the following competencies: (1) the ability to understand history, (2) the ability to investigate and synthesize historical information of various types, (3) the capacity to examine, explain, and discuss the nature and significance of historical phenomena from various angles, (4) an interest in investigating historical phenomena with a view to improving society, and (5) a consciousness of Japanese identity, a love of Japanese history, and an awareness of the importance of respecting other countries and their cultures.

The new history curriculum is groundbreaking in two respects. To begin with, it marks the first time in the history of Japan’s public secondary education system (established in the second half of the nineteenth century) that Japanese and world history have officially been combined in one course. Second, it represents a shift from content-based education centered on rote memorization to competency-based learning focused on the cultivation of skills and attributes.

The treatment of Japanese history as something separate and distinct from world history goes back to the Meiji era (1868–1912), when the first national guidelines for education were established. Japanese history, or Nihonshi, was installed as a core subject in the primary grades, where it was meant to instill patriotism and reverence for the emperor (as set forth in the 1881 Guidelines for the Course of Study for Elementary Schools). World history, then known as bankokushi, was taught mainly in the higher grades and initially focused on the Western world as the center of “civilization and enlightenment.” From the first lessons, dealing with ancient mythology, Nihonshi and bankokushi went their own separate ways, never intersecting.

In 1902, in the wake of the First Sino-Japanese War (1894–95), the Education Ministry added a separate Eastern component to the middle school bankokushi curriculum, citing the need for students to learn about Asian countries in light of their deep historical ties with Japan. Tokyo Imperial University, meanwhile, divided its history program into three departments, Nihonshi, Tōyōshi (Eastern history), and Seiyōshi (Western history). The practice spread, until the compartmentalization of history into three separate branches was firmly entrenched in Japanese academia.

Sekaishi debuted in the Japanese high school curriculum after World War II, with the establishment of the new secondary school system. Sekaishi brought Asia (minus Japan) back into the study of world history, but Japanese history continued along its own separate path. Often, high schools made their students choose either Japanese or world history, the better to focus on the handful of subjects they would be tested on in the all-important university admissions examinations.

In 1989, the Education Ministry designated world history a required course for high school students, citing globalization and the need to educate internationally minded citizens. But this policy raised objections on the grounds that leaving students ignorant of their own nation’s history ran contrary to the ministry’s stated goal. This in turn sparked the opposing concern that making Japanese history mandatory would lead some regional schools to overly focus on the subject at the expense of teaching students world history.

In 2011, in an effort to satisfy both sides in the debate, the Science Council of Japan proposed melding Japanese and world history into one course. Deliberations within the Education Ministry’s Central Council for Education ultimately led to the establishment of rekishi sōgō, or modern and contemporary history, as a required high school subject.

Japan’s old approach to world history had its pros and cons. On the plus side, it offered a thorough and systematic overview, instead of ignoring large swathes of the world deemed irrelevant (as was the practice in many countries).

The textbooks for Japanese history were terminology-heavy in their own right (though less daunting, since high school students went into the subject with prior knowledge accumulated in elementary and junior high school). But rarely did the key concepts highlighted in the world history textbooks figure at all prominently in the Japanese history curriculum, even when they had obvious relevance. For example, in world history, students learned that in the wake of World War I, a “new diplomacy” emphasizing international cooperation emerged, existing side by side with the “old diplomacy,” which was grounded in imperialism. But these competing currents are barely mentioned in the Japanese history curriculum. Accordingly, one’s understanding of Japan’s position going into the Washington Naval Conference of 1921–22 is likely to differ substantially depending on whether one learned about it in the context of world history or in that of Japanese history.

Given this lack of overlap and the heavy emphasis on rote memorization in both subjects, a key challenge facing the curriculum designers was to combine Japanese and world history without doubling the volume of information to be memorized. The solution was to design a competency-based curriculum that emphasizes historical thinking and interpretation, focusing on three major themes in modern history: (1) modernization, (2) rise of mass democracy and the changing international order, and (3) globalization. This signaled a major departure from the encyclopedic approach of previous high school history curriculums.

Modern and contemporary history as it stands is a single two-credit course (two 50-minute classes per week), but it has lofty ambitions. It proposes a departure from the established pattern of high school history classes, where the teacher distributed photocopied handouts and lectured, while the students furiously scribbled historical terms in the margins—terms that they memorized for the next test and then quickly forgot. The idea now is to have students read historical materials, ask questions about the changes occurring in the period under study, and search for answers to those questions.

The textbooks developed for the new curriculum are sprinkled with sample questions and problems for further study. For example, Shōjutsu rekishi sōgō (Jikkyō Shuppan, 2022) suggests that students compare Japan’s early steps toward modernization in late Edo period with similar trends in the Ottoman Empire, Egypt, Thailand, or Qing dynasty China. In addition to getting students to think more deeply about sweeping historical trends, questions like these help establish connections between Japan and the rest of the world.

The textbooks also encourage students to read and interpret source materials and hone their thinking and communication skills as they consider the issues of the day from various angles. For example, Meikai rekishi sōgō (Teikoku-Shoin, 2022) speaks of the shifting tide of public opinion on the Washington Naval Conference and asks students to analyze a contemporary Japanese newspaper editorial that lauds the conference as a step toward disarmament and world peace.

In this way, the new curriculum promises a truly “historic” shift from rote memorization for its own sake to knowledge as a basis for critical thinking and communication.

That said, the modern and contemporary history curriculum is a work in progress, and significant issues remain to be addressed. For one thing, shifting emphasis notwithstanding, the new textbooks remain densely packed with factual information. If the writers of Japan’s university entrance exams scour these textbooks for details on which to test examinees (as they are wont to do), the result will simply be more rote memorization and cramming.

Another problem is that in many cases the textbooks fall back on parallel narratives (“meanwhile, back in Japan”) instead of offering a truly integrated global perspective.

For example, Japanese textbooks explain Japan’s rapid growth era almost exclusively in terms of internal factors without discussing such broader global trends as the international division of labor that emerged during the Cold War or the economic resurgence of East Asia as a whole. If we focus narrowly on factors unique to Japan in explaining the Japanese miracle, then how can we understand the economy’s subsequent stagnation, except as a case of “system fatigue”? Although the compartmentalization of history into three separate branches continues at Japanese graduate schools today, a more integrated analytical approach is emerging in the form of “global history.” More work is needed to achieve truly dynamic integration of Japanese and world history in the high school curriculum as well.

Finally, I believe that one of the goals of the new curriculum should be to foster a more student-centered, collaborative approach to learning. Until now, history classes have modeled on the image of a teacher with vastly superior knowledge who unilaterally enlightens the students. But as I see it, every student has his or her own sense of history grounded in a particular background and worldview, and no one’s sense of history is inferior to anyone else’s. To be sure, I may have a deeper fund of historical knowledge and more experience grappling with historical issues. But I have gaps and insufficiencies in my understanding, just as my students do.

I believe we should treat our students as fellow explorers. For me, the new curriculum is an opportunity for teachers and students alike to engage with historical questions that have no right or wrong answer. That is my personal goal for the new modern and contemporary history curriculum.