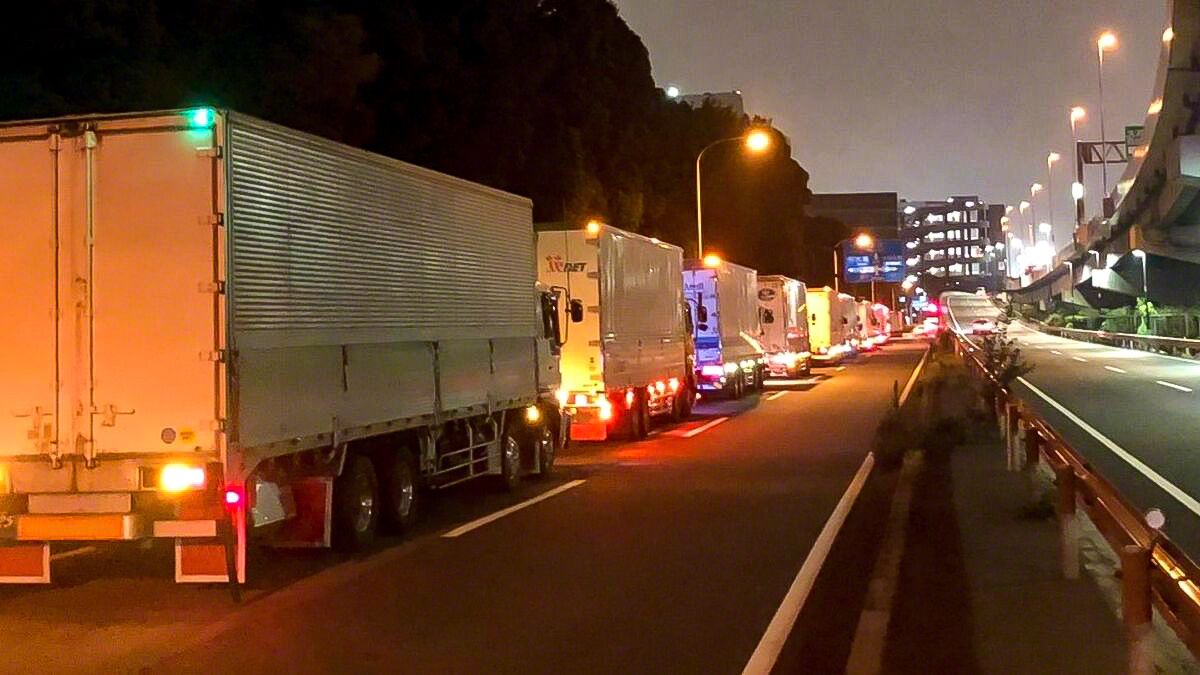 The Erasure of the Truck Driver

Society Work Jul 27, 2022
The ubiquity of the phrase “free shipping” has created a generation of consumers that assume that if they cannot get something delivered for free, they should not buy it at all. This article examines the harsh, unseen reality behind consumer convenience.

Japan is home of the saying, “the customer is god.” This was coined by the enka ballad singer Minami Haruo in 1961, when he stated said that he endeavored to perform for his audiences in a serene state of mind, as if praying to god. While the statement earned praise for Minami’s humility as an entertainer, with the advent of the “claimer” (a Japanese word meaning bossy customer) in the late 1980s, the phrase came to be used with a broader meaning: that customers should be allowed to get away with anything.

With the idea that all work is performed with the aim of pleasing the customer now broadly entrenched, many Japanese workers vie to outperform their competitors in terms of customer satisfaction. This requires them to endure harassment from customers, bringing about physical and mental exhaustion in turn. And no one suffers more than truck drivers.

Over 90% of domestic freight in Japan is transported by truck, which means that trucking is an integral part of almost every industry, and that most of the products we see around us were transported by truck. The COVID-19 pandemic has prompted drivers to be dubbed “essential workers,” alongside healthcare professionals. However, despite finally achieving visibility, drivers command surprisingly little respect, and the reality of their working conditions is not widely known.

The Truth Behind Free Shipping

Two clear examples of how truck drivers are at the mercy of Japan’s obsession with customer satisfaction are designated delivery times and redelivery. In Japan, consumers are able to specify the delivery time that suits them, choosing the time that of day is most convenient to receive a parcel. However, they often think nothing of breaking their commitment to the courier by failing to be home at the designated time. Others are in fact at home when the courier arrives, but pretend to be out, giving the excuse that they were cooking and could not leave the stove at the time, or that they had not put on their makeup. Still others will be brazen enough to ring the courier’s dispatch office to complain that that they had just put their child to sleep only to have naptime interrupted by the doorbell. 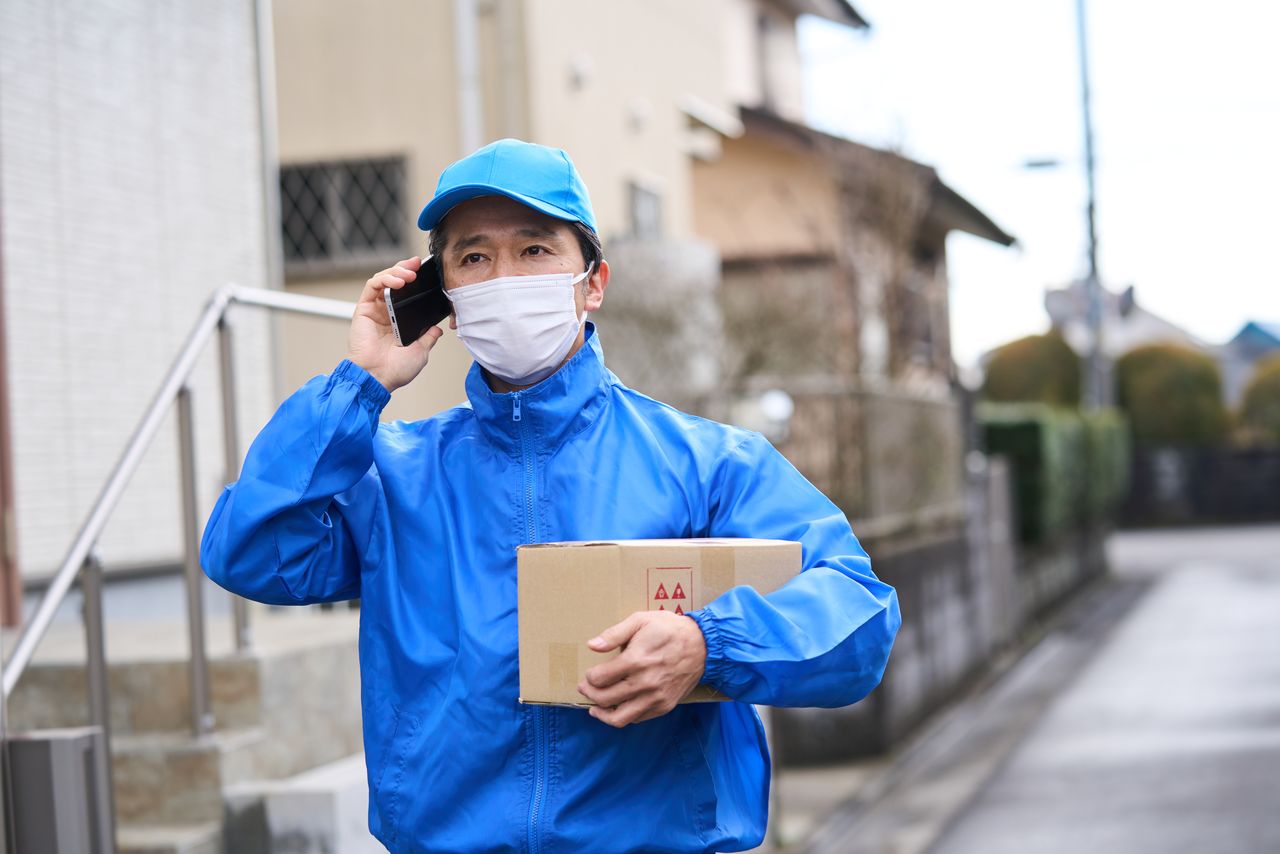 Owner drivers have to foot the cost of redelivery themselves. (© Pixta)

Any items not delivered on the first attempt automatically become subject to redelivery, and some consumers having no shame in forcing their courier to make multiple redelivery attempts. Recently, a tweet directed at a major online retailer by a customer offended by a note left by the courier after three redelivery attempts—angrily stating “be here when you say you will!”—went viral. While I do not defend the courier’s rudeness on the delivery slip, I can understand how someone who has delivered 200 parcels, on time, in a single day, all the while in constant fear of getting a parking ticket, could snap after being “stood up” repeatedly by a customer, “god” or not. The need to redeliver parcels also wastes fuel, an expense that owner/operators have to meet themselves, and one that significantly impacts bottom lines in these days of high fuel prices.

The belief that the customer is always right is further exacerbated by the prevalence of free shipping. While the practice of advertising products with “free shipping” is common overseas as well, Japan’s obsession with customer satisfaction has caused the phrase to take on a new meaning. Advertisements tend to use the phrase “free shipping” because it is received more positively by consumers than “shipping included” or “we pay the cost of shipping.” But when “free shipping” becomes divorced from reality, customers forget that delivering parcels actually does cost money, and that drivers exist; they therefore no longer feel guilty about having their parcels redelivered. As a result, many courier drivers feel that their jobs are not valued, despite bending over backward to please their customers. The phrase “free shipping” has more to answer for than people realize.

Paying for Tears in Boxes

But trucks carry more than home deliveries. Many truck drivers transport goods from factories and distribution centers to supermarkets and other commercial clients. Unlike couriers, these drivers seldom interact with the end user. Therefore, despite the fact that these drivers provide important social infrastructure, little is known about the harshness of their working conditions. When long-distance truck drivers do make the news, it is usually for something negative, like a parking violation or a breach of etiquette. 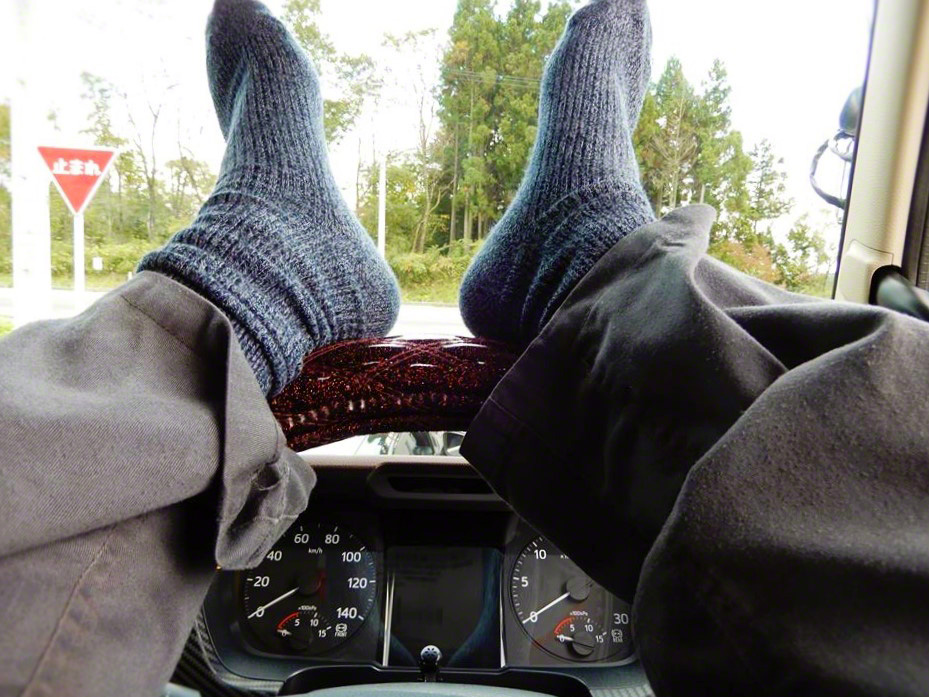 While often slammed as bad etiquette, the practice resting one’s feet on the steering wheel during breaks is a way to relieve the fatigue of hours of driving. (© Hashimoto Aiki)

For those drivers who handle shipments between businesses, the most important customer is the consignor of the delivery. Every day, trucks form long lines outside factories and warehouses, waiting to pick up or deliver goods. Delivering before, or after, the designated time is not allowed. Rather, an efficiency-oriented approach to production known as the “just-in-time” approach requires drivers to deliver only what is needed, when it is needed.

Some drivers even arrive on time, only to endure long hours of waiting because the preceding driver had not finished unloading, or because the recipient was not ready to take delivery of the goods. Among the drivers I have interviewed to date, the record waiting time is more than 21 hours! Despite this state of affairs, the parties consigning shipments almost never provide parking lots or waiting areas for these vital workers.

After their long wait, drivers are required to load or unload their delivery and perform associated tasks. Drivers are sometimes forced to unload thousands of items by hand, apply labels, check deliveries, or even place goods on shelves. Surprisingly, these tasks are often unpaid. 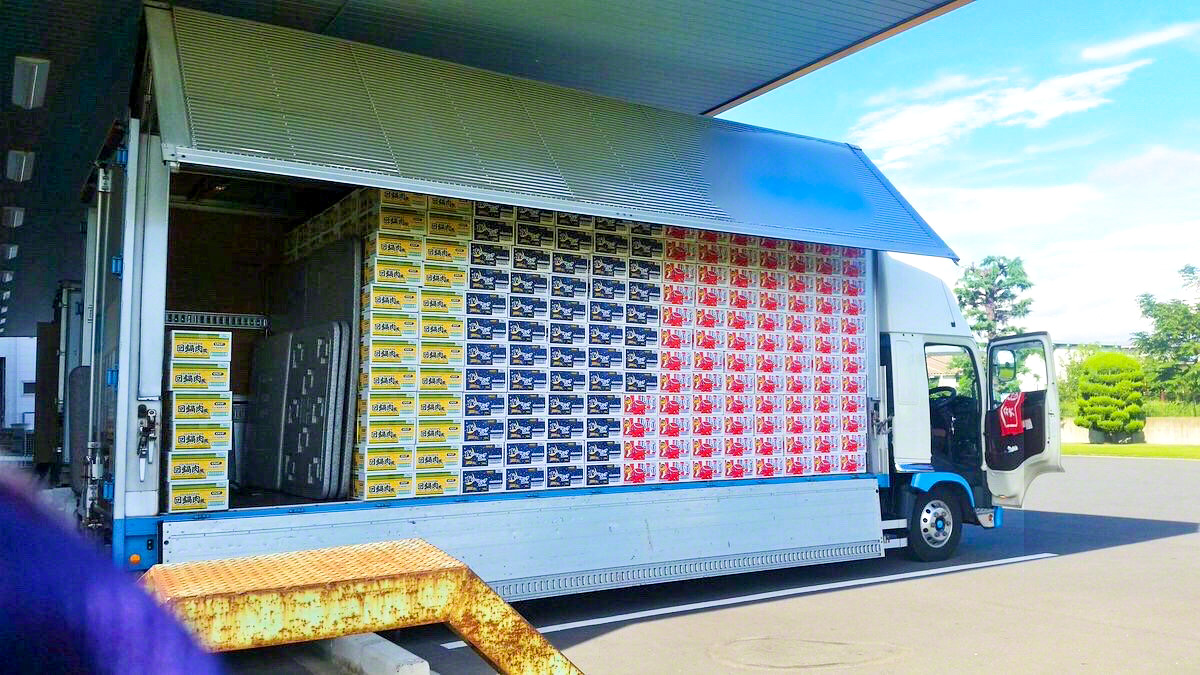 Being kept waiting, and the need to perform associated tasks, are also direct causes of truck drivers’ long working hours. It is easy enough to say, “if you don’t like it, don’t do it,” but in Japan, the customer is god: refusing such a request will result in being told that “if you won’t do it, another driver will,” and immediately being dropped.

The epitome of this “customer is always right” madness is compensation claims for damage to boxes. Some consignors insist on returning shipments if packing boxes are even slightly damaged, even if the contents are unblemished. In many cases, in addition to returning the shipment, the consignor also demands compensation from the driver. 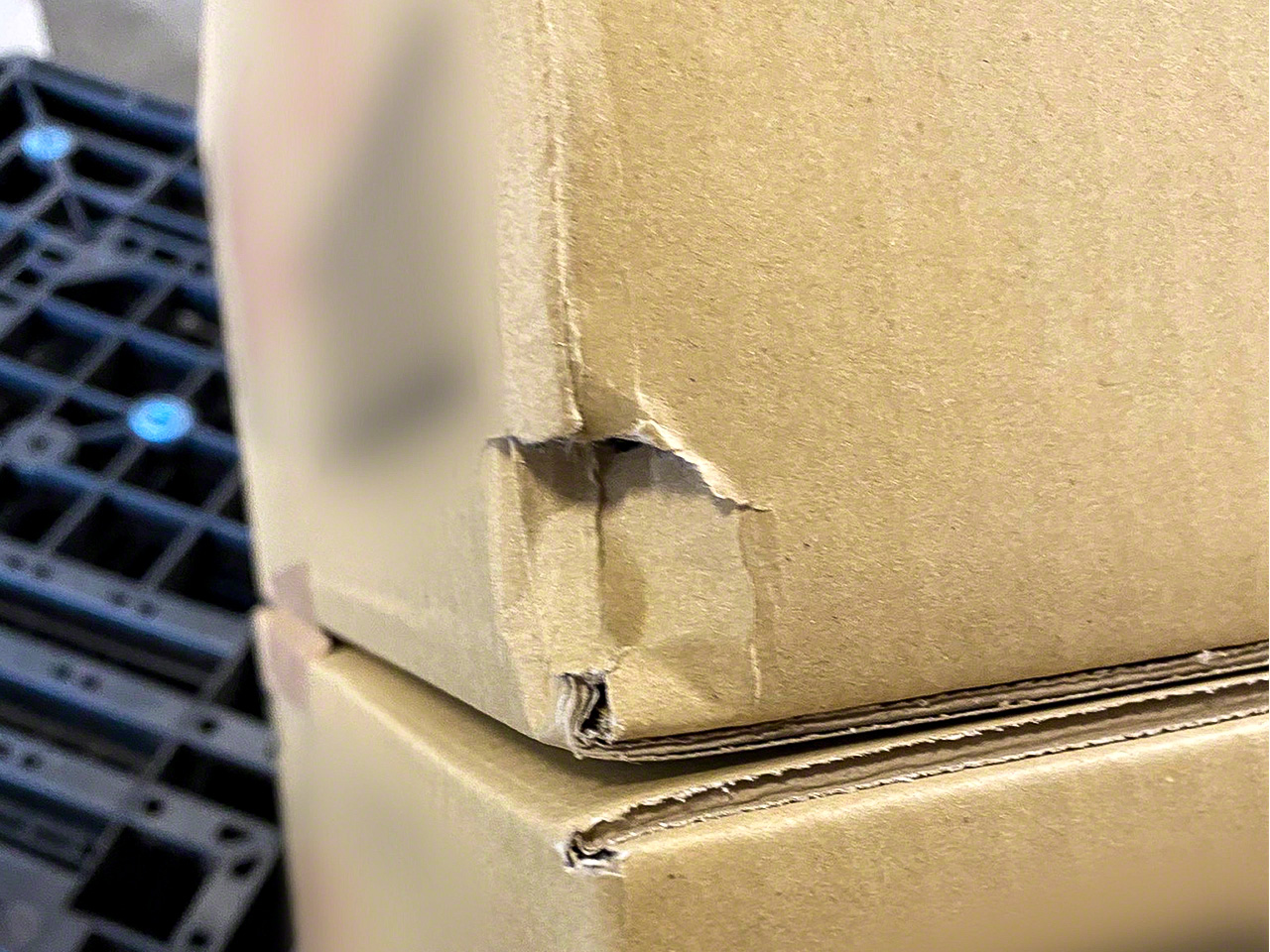 Damage to boxes often results in compensation claims, even if the contents are undamaged. (© Hashimoto Aiki)

Compensation claims can run into the hundreds of thousands of yen, making it a critical issue for drivers’ livelihoods. Even worse are the clients who force drivers to pay compensation but hold onto the goods, their outrageous rationale being that if the goods were to be disposed of cheaply on a “flea market” app, the client would be unable to sell them at the regular price. At the end of the day, boxes are merely packaging, and when transporting boxed shipments over long distances it is impossible to avoid the odd scratch. Attacking drivers for this is extraordinarily unfair.

In recent years, efforts to stop the spread of COVID-19 have led more consumers to ask that their deliveries be left at their front door or placed in parcel lockers. While this makes for more efficient deliveries, it also means less interaction with the courier, and there are fears that the trend will exacerbate the erasure of the workers who deliver one-click purchases to customers’ doors, making the vital distribution industry all the less visible to those enjoying its benefits.

“Have we become invisible?” This is the question asked by drivers who, behind the promise of free delivery, are forced to make physical, financial, and psychological sacrifices. If customers really are godly, you would think they would be better at understanding the driver’s feelings.