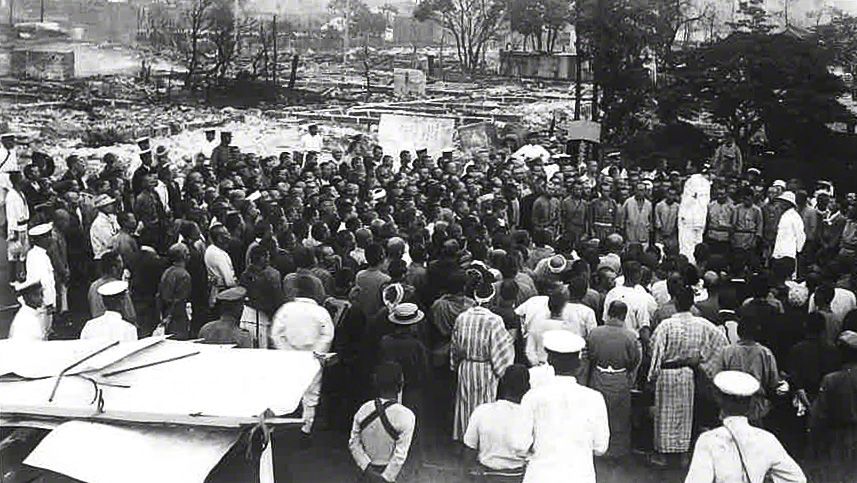 A Spirit of Trust: Prisoners Make a Miracle Return

Society Politics Aug 3, 2022
When the Great Kantō Earthquake of 1923 reduced the workhouses and factories of Yokohama Prison to burning rubble, the prison director decided to release the over 900 surviving prisoners on the condition that they return within 24 hours. While the director’s decision was a gamble, it turned out to be an inspired one.

A sudden earthquake at 11:58 am on September 1, 1923, caused the total collapse of the Yokohama Prison’s 5-meter-high brick perimeter wall, which stretched 300 meters north to south and 260 meters east to west. The wall collapsed at the moment of the Great Kantō Earthquake, which left 105,000 dead and unaccounted for. 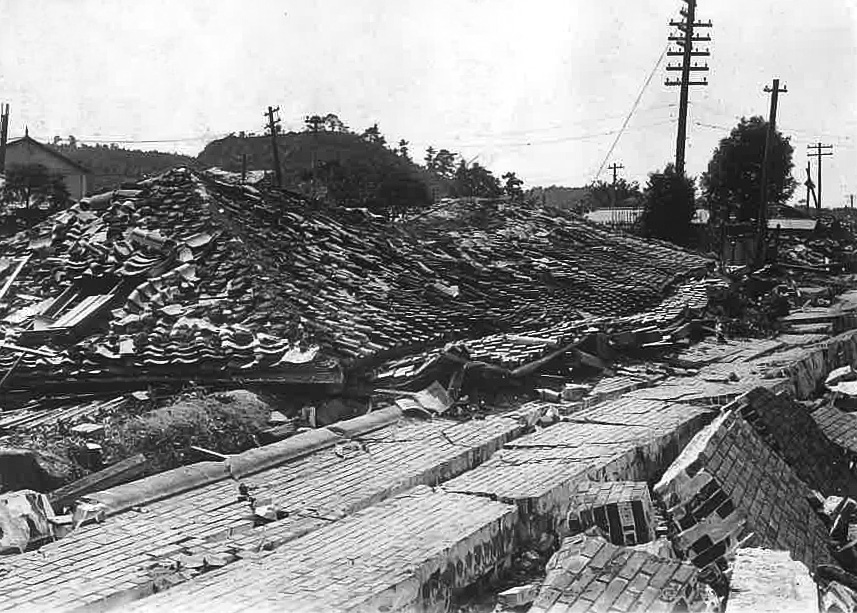 The perimeter wall and cellblocks were destroyed in a matter of moments.

The prison housed over 1,100 inmates, all of whom were inside the high-security workhouse, solitary confinement blocks, or cellblocks at the time of the quake. A series of jolts caused the wooden buildings to collapse, one after another. The wardens risked their lives to unlock the workhouse and cellblocks so that prisoners could go out into the yard. Running outside to the evacuation point, the prisoners were amazed by what they saw. The perimeter wall had collapsed, revealing the surrounding houses. They could have escaped easily if they wanted to.

Prison director Shiina Michizō was shocked to see the prison destroyed beyond recognition. Beyond the remains of the perimeter wall, a derailed tram was visible, resting on an angle. Shiina prayed that the inmates and staff were safe, but was resigned to the fact that a significant number of prisoners would escape. 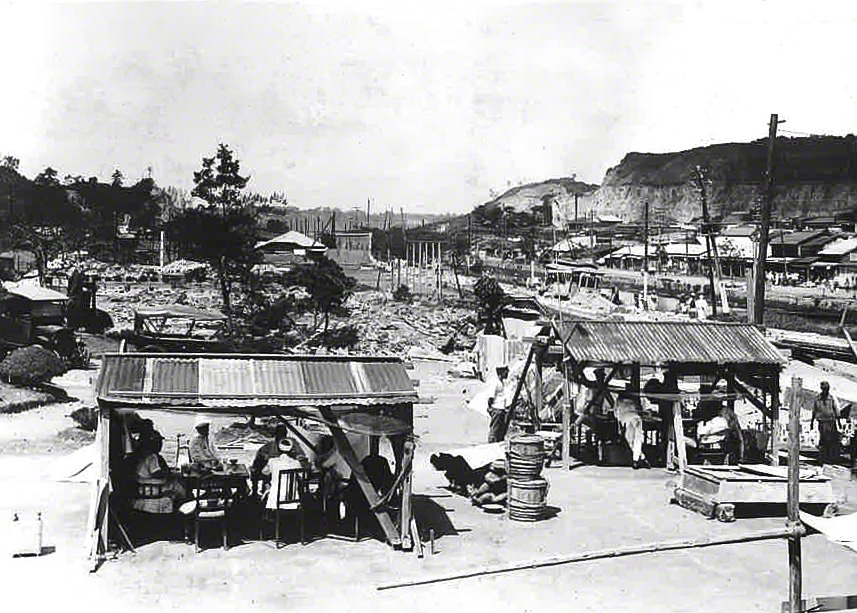 The barracks-style guards’ quarters. A derailed tram can be seen in the distance.

However, Shiina was amazed to be informed half an hour later that not a single prisoner had escaped. Quite the opposite, many inmates were working together to rescue guards and fellow prisoners trapped in the rubble. The sight moved Shiina immensely.

At around 2:00 pm an adjacent group of buildings (employee housing for the local electricity company) caught fire. Fanned by the strong wind that was blowing at the time, the fire spread to the prison. However, all the prison’s fire pumps and fire extinguishers were buried beneath the rubble. Staff and prisoners worked together to move bedding, documents, and medical supplies to the road, which was out of reach of the fire, while they waited for the fire to abate. Yokohama was covered in black smoke, suggesting the surroundings were completely ablaze. Being an international port, the area contained many piles of coal and row upon row of fuel tanks used to refuel ships.

Shiina decided to exercise his authority under the Prisons Act to release the inmates. This was possible under a special provision of the act that had been included with the aim of protecting lives. Under this provision, after a natural disaster or calamity, if there was no suitable evacuation site on the prison grounds and it was not possible to transfer the prisoners to a safe location, the director was able to release the inmates on the proviso that they were to return within 24 hours. Japan was likely the only country with such a rights-based provision in its laws. The rule dates back to the seventeenth century, when, during the 1657 Great Fire of Meireki, which killed 108,000 as well as destroying the keep of Edo Castle, prison magistrate Ishide Tatewaki freed the approximately 300 inmates in the Kodenmachō rōyashiki, or detention house, which was in the path of the fire, and ordered them to head down the valley to the temple Renkeiji so that they would not perish.

At just after 6:00 pm, Shiina gathered up all of the 900-plus inmates who could walk. At that time, 38 inmates had died and 60 were injured, 10 of those seriously. Shiina issued orders from a platform.

“I am sincerely thankful to you for assisting the rescue effort and emergency duties without a single escape. I have decided to return your trust in us by trusting you. I hereby declare you free, but temporarily. Many people, including members of your own families, will be in an indescribably wretched state. I want you to make sure your families are safe, do as much good as you can, and come back here by this time tomorrow,” he said.

The men, all in distinctive dark-orange prison-issue clothing, left the prison grounds. Within 24 hours, over 500 had returned. Almost all the inmates, including those who were on the way back from visiting their families, helped unload an aid shipment at the instruction of the governor, a task they undertook by way of atonement for their crimes. Onlookers watched, amazed and grateful to see the inmates on a wharf that had suffered extensive damage in the earthquake performing such a dangerous task.

There is a saying that samurai give their lives for those who truly know them. Shiina was well versed in the criminal records of each inmate, the backgrounds to those crimes, and the inmates’ family situations, and endeavored to give words of encouragement to the inmates as appropriate. The prisoners were touched by the fact that Shiina actually knew their full names. Shiina, who saw punishment not as a form of retribution but as a form of education based on humanitarianism and trust, was held in high esteem by the inmates. It was the desire to return their debt of gratitude to Shiina that made the inmates volunteer to unload the aid shipment.

Around half of the inmates were subsequently transported to Nagoya prison by battleship. Learning of this, many residents of Yokohama came to the wharf, which was near the prison, to see the prisoners off. Many wanted to thanks to the prisoners for what they had done. 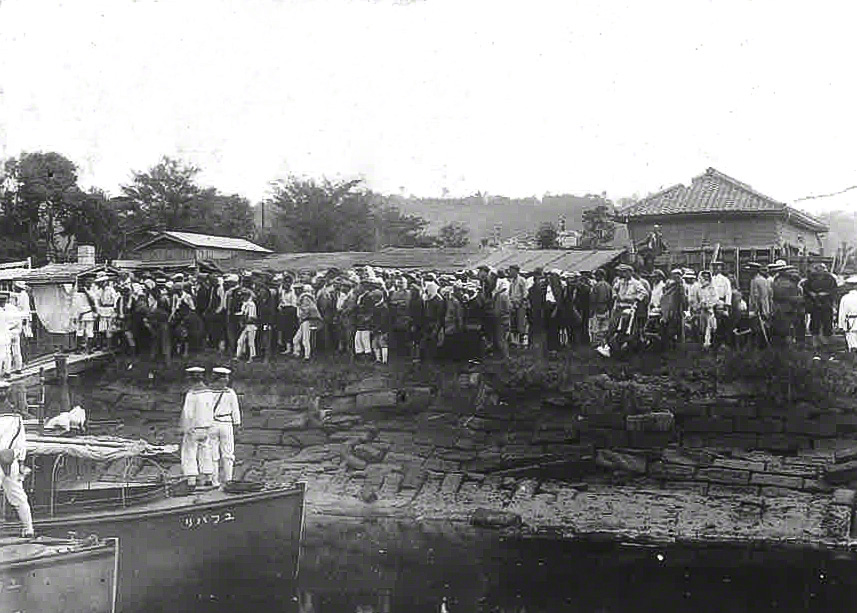 Seen off by residents, inmates board boats to transfer them to the battleship Yūbari.

Exactly 934 inmates were released. By the time of the second transport in mid-September, 694 had returned to the prison, which left 240 outstanding. Shiina was worried that the remaining inmates had been caught up in the sometimes fatal violence against evacuees by vigilante groups that was rife throughout the Kantō area after the earthquake. To Shiina’s relief, however, an additional 176 inmates subsequently returned to the prison. Shiina also learned that another 64 had turned themselves in at another prison. All inmates were therefore accounted for.

However, the decision to release the inmates also gave rise to a tragedy. With radio not yet commonplace, the earthquake spawned all manners of rumors that spread throughout the country. Within days, the rumor that inmates had stolen a sword from a guard to go on a raping and pillaging spree had been reproduced in newspapers in both Kansai and Tōhoku. With these false reports never corrected, the newspapers that contained them ended up entering the collections of many libraries, thus becoming accepted as historical fact. Meanwhile, what really happened—the inmates’ assistance with unloading freight—was never reported.

The Short History of Prisons in Japan

It was not until mid-1800s that Japan came to build sturdily constructed prisons to house inmates. Before then, the only punishments meted out were death, exile to a remote island, dismissal from one’s place of residence, home detention, flogging, and being marked with tattoos, meaning that there was no need for detention facilities. Furthermore, the rōyashiki in places like Kodenmachō existed to house persons awaiting sentencing, making them the precursors of modern-day detention centers, rather than jails for lengthy stays. It was the Meiji government that established laws and prisons modelled on those in Western Europe and replaced the former penalties with those that curtailed rights to life, liberty, and property. Prisons came to assume a Western-inspired radial layout, with workhouses for the imposition of sentences with labor. 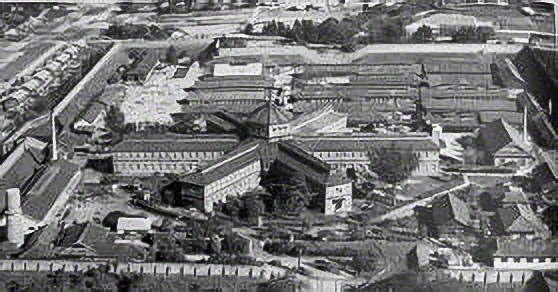 Miyagi Prison was completed in 1879. The wooden cellblocks are modelled on the Leuven prison in Belgium. The single-story building in the background is the workhouse. 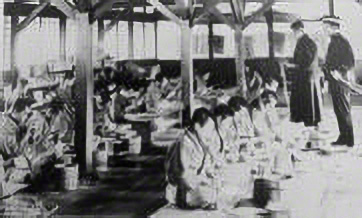 Imprisonment with labor first appeared at an Edo facility at Ishikawajima, which was established in 1790. A reform institution to house petty criminals sentenced to receive tattoos or lashes of the whip, the facility trained its inmates as builders, plasterers, sandal makers, and basket makers, and provided them with loans to enable them to reform after being discharged.

Decrease in Communication Poses Risks for the Future

Around 50 years ago, most Japanese prisons adopted an operating policy that focused on rules and order. In the name of fostering obedience to the law, prisons also implemented a control-based approach that required inmates to comply with detailed rules. In recent years, however, a decline in the inmate population and changes in inmates’ characteristics have caused significant change in the prison environment. Notable is the increasing number of spaces that resemble aged-care facilities, a result of the increasing age of the prison population, and the discontinuation of activities aimed at giving inmates vocational skills.

Just 20 years ago, four prisons opened in Japan that leveraged private-sector involvement. But recent years have seen several traditional prisons close down due to the dramatic decline in the prison population. Advances in automation of security also mean that communication between wardens and inmates has become more rarefied, creating concerns that wardens’ level of skill in reforming inmates is on the decline.

What is most feared is the future of the relationship between inmates and wardens. If there is no trust between these two groups, they will not be able to communicate well. By trusting the inmates like Shiina did, inmates also come to trust their wardens. This is not a platitude but a fact. Leaving aside prison directors, who are frequently transferred to positions in other prisons, and other high-ranking officials, we must not forget the importance of wardens, who play a role as educators in the broad sense of the word, by exercising humility in their interaction with inmates and doing many good deeds to earn inmates’ trust and respect. It goes without saying that the relationship of trust between those two groups underpins a successful prison.