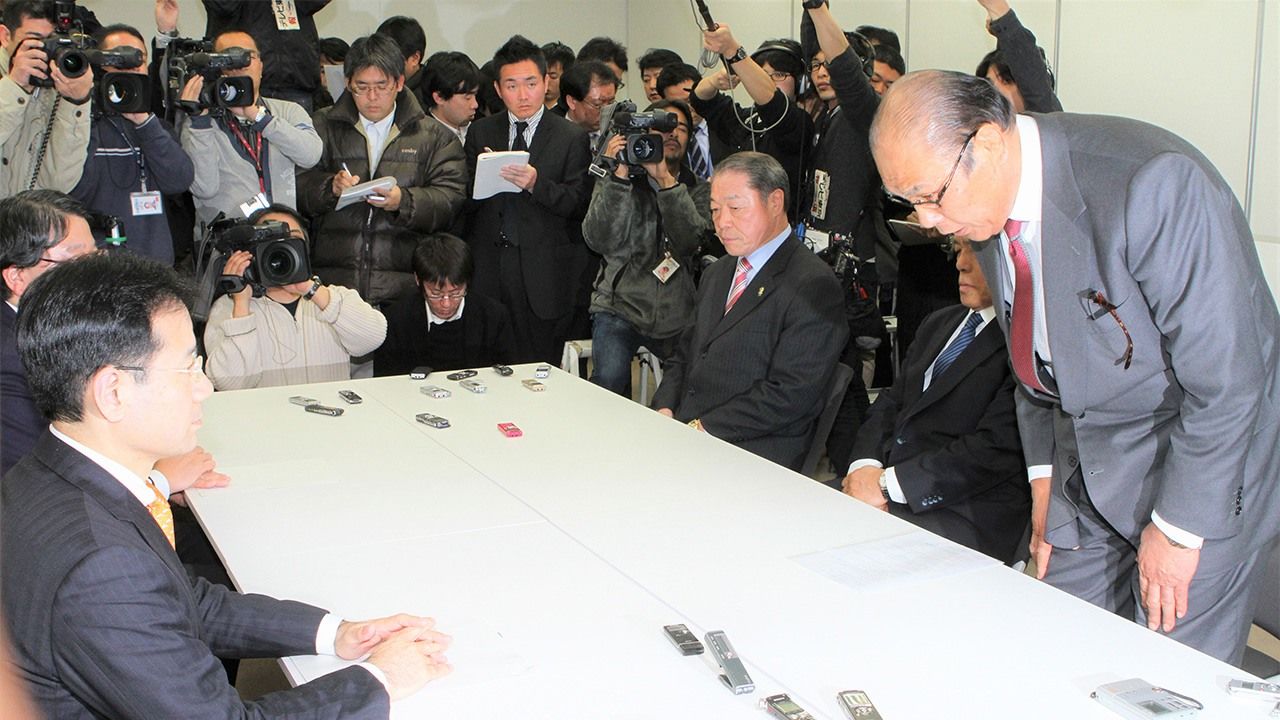 A Risky Bet? Looking at the Dangers of Legalized Sports Gambling

Sports Economy Society Aug 22, 2022
The Japanese government is eyeing betting on sports as a new form of gambling to legalize. An official study group has been discussing the issues involved, developing a growing consensus that Japan should follow in the footsteps of various Western nations that allow betting on sports events. How has this debate progressed, and what can be expected in the Japanese sports world if this comes to pass?

Thinking of Ways to Enhance the Sports Scene

In October 2020 the Study Group on Collaboration of Regional Areas and Sports Club Industry held its first meeting. The members, including university academics, corporate managers from the sports industry, officials from competitive sporting leagues, and former athletes, met 10 times up through March 2021, compiling a preliminary proposal in June of that year. In its opening passage, the proposal identified two areas for consideration: first, the potential for development of regional sports clubs that could serve as engines of local economic growth in the service industry, and second, the question of sustainability of sports clubs at schools, which so far have formed the foundation for athletic activities at the junior level.

In sum, the proposal says that to ensure that regional sports clubs can support athletic activities at schools, the sports industry needs to be revitalized as a revenue-generating center. Betting on sports is positioned as one way to produce this revenue; as the scale of the industry grows, the increasing flows of funds can be circulated back into the sporting world.

The materials distributed to the group members gave an overview of the sports gambling scene in Europe and North America. In Britain, the country with the longest history of legalized sports betting in the modern era, bookmakers gained official government recognition in 1961. In the current century, Italy, France, and Germany approved private companies’ entry into the sports betting field, and since 2018 US legalization has proceeded in some states.

In Japan, there are a handful of officially sanctioned betting activities—horse racing, keirin cycle racing, boat racing, and motorcycle racing—along with Toto, a lottery ticket system for picking winners in sports matches, and the Takarakuji lottery. Private corporations are not allowed to take part in the gambling industry, though. Other Asian countries like India, China, and South Korea have similar limitations in place, with gambling banned except for a handful of publicly managed sports betting schemes and lotteries.

The study group’s projection is that opening the door to betting on sports will boost tax revenues. As one example backing this up, the members point to the recent legalization moves in the United States, which in just two years brought the equivalent of more than ¥20 billion into the public coffers.

Meanwhile, a subcommittee in the ruling Liberal Democratic Party’s Research Commission for the Establishment of a Sports Oriented Nation has produced similarly supportive statements on the potential for sports betting: “We believe that Japan could benefit from deeper discussion on and understanding of the impact of the increasingly DX-driven sports betting market on the sporting industry, the potential influence on the sports world as a whole, and cultural, societal, and other external factors connected with this betting.”

As indicated by the focus on DX, or digital transformation, in this statement, sports betting is also likely to be highly attractive to the IT industry. Kimura Kōki, president of the social media firm Mixi, is also involved in sports-related business, and has spoken to the government’s study group on the great potential he sees in sports betting in Japan. In his presentation he focused on the online gambling scene in the United States, detailing the way that private-sector actors are working together with major sports leagues like the National Basketball Association, Major League Baseball, and the National Football League and with data-analysis companies.

One can expect similar cooperation to take shape in Japan if betting on sports is legalized here. If television and online broadcasters get involved, it will produce payments for broadcast rights as well, further expanding the business chances provided.

Now that the Tokyo Olympic and Paralympic Games are over, Japan’s sporting world has little to look forward to in the way of profitable business chances for the foreseeable future. The ongoing COVID-19 pandemic has resulted in considerable restrictions on the numbers of people allowed to attend live sports events, while national government spending on athletic programs is expected to fall and sponsors in the private sector are tightening their purse strings. It is no surprise that all of this is driving sports industry figures to view betting on their games as a way to inject fresh dynamism.

One thing missing from much of this discussion, though, has been a consideration of what sort of competitive environment the athletes need to see take shape. Today, the racers and riders involved in the officially sanctioned betting events in Japan are subject to strict rules preventing contact between them and outside parties to prevent race-fixing or other scandals from cropping up. If sports betting is legalized in Japan, we can expect to see far more tension arise in the environment surrounding players and referees in popular sports like baseball, basketball, soccer, and rugby. If sports like sumō and boxing are added to the mix, then the individual competitors taking part in them can expect to see even stricter management of their lives. Athletes may be required to enter a period of something like quarantine in the time leading up to their competitions.

In 1969–71, Japanese professional baseball saw the “Black Mist Scandal,” with players from the Nishitetsu Lions (now Seibu) accepting pay from organized criminals to throw games. When the scandal came to light, also involving baseballers from other teams, six players were banned from the game for life, and many others received suspensions, pay cuts, and other punishments.

In February 2011, a match-fixing scandal rocked the top echelons of the sumō world as text messages exchanged by wrestlers and other evidence pointed to bouts being thrown. The Japan Sumō Association canceled the March Grand Tournament that year, and some 20 rikishi were expelled from the sport. A number of oyakata, or stablemasters, were also implicated and subjected to remotion, making this a scandal that shook the sumō world from the top to its very foundations.

Nor has soccer been immune. This year club officials and coaches for the Suzuka Point Getters, a Japan Football League side aiming to rise to the J. League’s third division, were caught instructing their players to lose matches on purpose. While the players rebelled against these instructions, preventing matches from being thrown, this scandal nonetheless lost the team its qualification to rise to the J3 level.

Professional sports always runs the risk of this sort of scandal. Official approval for betting on sports and the entry of private-sector companies into the gambling industry could open the door for further illicit betting managed in the dark by organized crime groups; this, in turn, could expose the athletes to personal danger, not to mention the danger to their sporting careers should any scandal come to light. Viewed in this way, it is clear that this gambling, while spun as something to help develop the industry, is not necessarily something that the sports world itself is eager to have.

Gambling and Games: A Long History

The history of betting on sports goes back millennia. Games carried out in the city-states of ancient Greece, for instance, are said to have been venues for vigorous betting by observers as well as opportunities for competitors to win prize money. In imperial Rome, duels between gladiators and fights between animals, or animals and men, were subject to bets placed by people entranced by the thrill of these blood sports.

From the medieval period onward, cockfighting became a common pastime at pubs in Britain, and gambling grew popular at all levels of society. In more modern times people came to bet on everything from horse racing to sports like golf and cricket. Today legally licensed bookmarkers handle bets on a huge variety of sporting and other events.

The unpredictability of who will win a given sporting contest is something that sparks the imagination of those watching; gambling on the outcome adds still another layer of excitement. When the masses can bet on sports, the events become even more of a thrilling spectacle. It is easy to think about the crowds in the Roman Colosseum, watching gladiators and beasts pitted against one another, as an eternal example of this very dynamic.

The Ideal Way to Promote Sports?

Gambling, an activity aimed squarely at people’s speculative spirit, comes with no small amount of associated problems. Even gambling-friendly Britain, where bookmarkers have been in business legally since the 1960s, took a very strict approach to the pastime before then out of concern over these issues.

Problems like betting beyond one’s means and gambling addiction are certainly on the radar in Japan as well. We are now in an age when digital technology gives us access to enormous amounts of information at all times, meaning that all we need is a smartphone to get online and, all too easily, to lose ourselves in the gambling opportunities there.

Hagiuda Kōichi, during his term as minister of economy, trade, and industry, cautioned that there was no truth to the idea that the government was rushing to legalize betting on sports any time soon. Despite his denial of a rapid rollout, though, the LDP’s sports research commission seems to be in favor of the idea. The legalization of betting would produce various new vested rights. For this reason, Japan needs to avoid focusing solely on the potential business upside and give proper consideration to the harmful effects that gambling can have as well.

It is also a questionable leap in logic to declare that revenue from gambling will go toward reinvigorating school sports activities and regional competitive clubs. Sports for young people should be positioned primarily as an educational activity, as well as one providing inspiration and helping to develop empathy and purity of spirit. These should be the focus of our efforts to make sports a part of younger generations’ lives.

The ideal way to promote sports is, first and foremost, to increase the population of participants. As greater numbers of people play sports, they pay dues to join clubs; seeking to improve their skills, they pay fees to coaches. Fans pay for tickets and head to stadiums to watch games, and TV and online broadcasters pay money for the rights to air the competition.

The more fans there are, the more willing corporations are to sponsor teams and get their advertisements in front of them. Team-related merchandise is produced and sold. And national and local governments provide a needed foundation for the sports by constructing facilities where they can be played. All of this represents valuable economic activity breathing new energy into sports as a whole.

This, I believe, is the proper way for money to cycle through the sports ecosystem. Before we clear the way for new approaches like gambling on games, there are many other things we should be doing first.

(Originally published in Japanese. Banner photo: Japan Sumō Association Chairman Hanaregoma, at right, bows in apology on February 3, 2011, to Vice Minister of Education Suzuki Kan, at left, for the bout-fixing scandal in his sport. Just six months earlier, in August 2010, he had replaced Kitanoumi, who stepped down in connection with illegal betting on baseball games by sumō industry figures. © Jiji.)