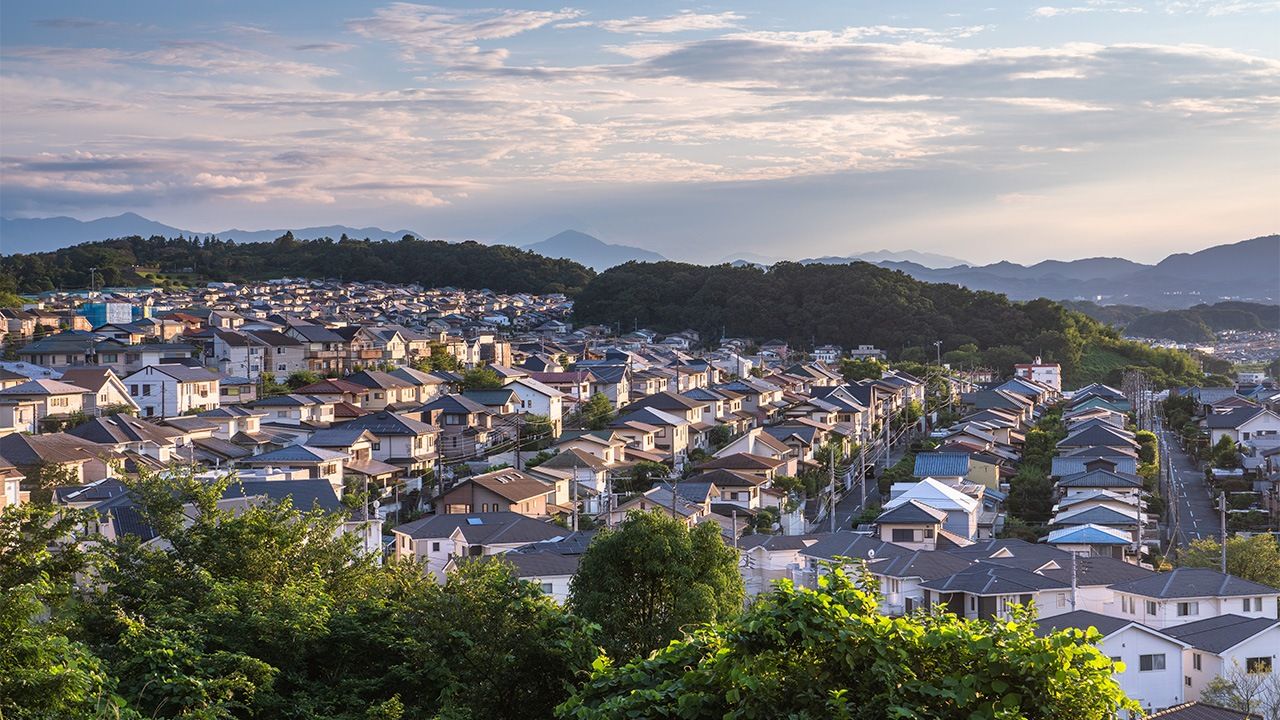 Society Nov 7, 2022
Japan is building high-rise condominiums in urban areas at a feverish pitch while new residential areas continue to spring up in the suburbs. At the same time, vacant houses are on the rise. An expert in urban planning considers why amid a housing glut, home ownership remains out of reach for so many.

Japan’s housing market is out of line with the country’s demographic reality. Annual births have fallen from 1.19 million in 2000 to an all-time low of 810,000 in 2021, with the COVID-19 pandemic pushing the figure below even government predictions. At the same time, high-rise condominiums are going up one after another in cities, and land, including agricultural plots, in suburbs and regional municipalities is steadily being converted to residential lots. What is behind this state of affairs?

Japan’s robust stock of new residences is the result of a trend in home construction that first began in the early postwar period and has seen the country steadily build its supply of dwellings. According to the 2018 Housing and Land Survey, which the Ministry of Internal Affairs and Communications (MIC) conducts every five years, the nation’s housing stock outstrips the number of households by 16%. On paper, at least, Japan does not have a housing shortage. 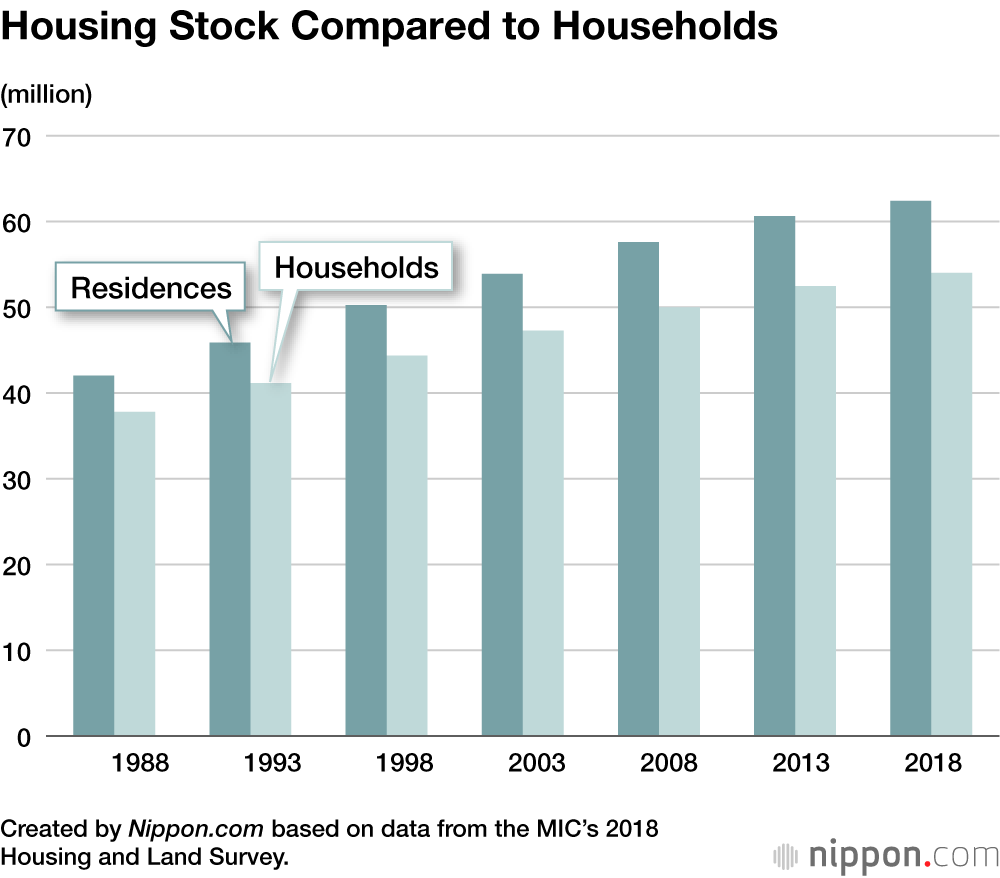 Looking at the real estate market, though, reveals a different story. Japan’s Residential Property Price Index shows a steady rise in the value of new and used condominiums since 2013. The prices of new homes have also shot up from April 2020 due to factors like shortages of skilled workers and lumber, along with soaring costs for materials. At the same time, demand for new dwellings has gone up as Japan’s rock-bottom interest rates have coupled with rising dissatisfaction among renters—particularly, as more employees shifted to remote work during the pandemic, unhappiness with properties they find too small or insufficiently soundproofed from their neighbors’ flats—increasing the appeal of homeownership. 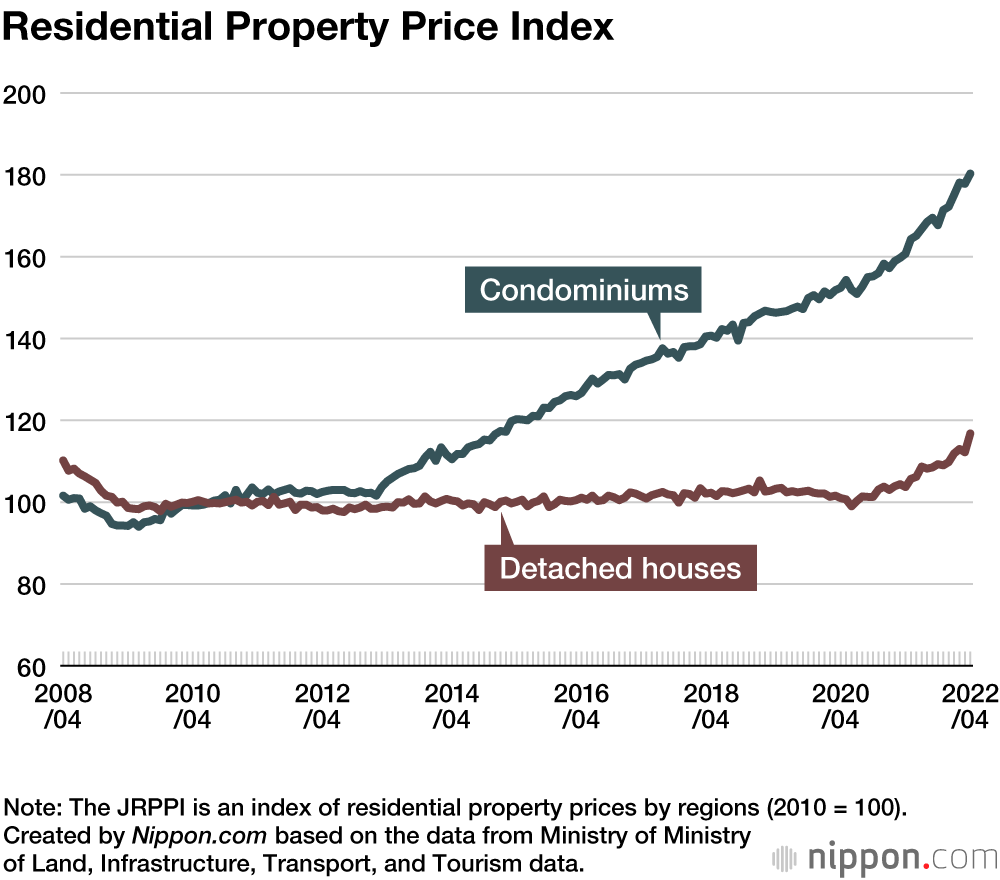 The index, which measures percentage of price changes from a specific point—2010 in the case of the JRPPI—based on various sources of data, shows that as of April 2022, condominium prices had reached 180.3, or 1.8 times the median. According to figures by the Real Estate Economic Institute, the average price of a new condominium per 70 square meters in 2021 was an eye-watering ¥87.57 million in central Tokyo, ¥64.75 million in the surrounding metropolitan area, and ¥59.43 million in Osaka. Demand for such expensive dwellings is said to be driven by high-earning couples, who purchase condos to live in, as investments, or to lower their inheritance tax burden. This rise in price of new units is also working to drive up the cost of used condominiums.

Subsequently, it is getting harder for average households and younger individuals to purchase dwellings even as Japan’s housing stock swells. Following the bursting of Japan’s economic bubble in the early 1990s, the government introduced policy reforms aimed at helping financial institutions clear non-performing loans from their balance sheets. These included measures to boost development of large swaths of underused land, such as relaxed regulations governing the floor area ratio, the proportion of a building’s total floor area with respect to the plot of land it sits on. This opened the way for condominiums with more units and sparked the ongoing rush of building high-rise complexes, especially in major urban areas.

As a commercial enterprise, residential construction naturally targets areas that offer a high return on investment, resulting in a greater concentration of housing units in these neighborhoods. However, this buildup of costly dwellings in urban centers has effectively shut large numbers of average home buyers out of the housing market. 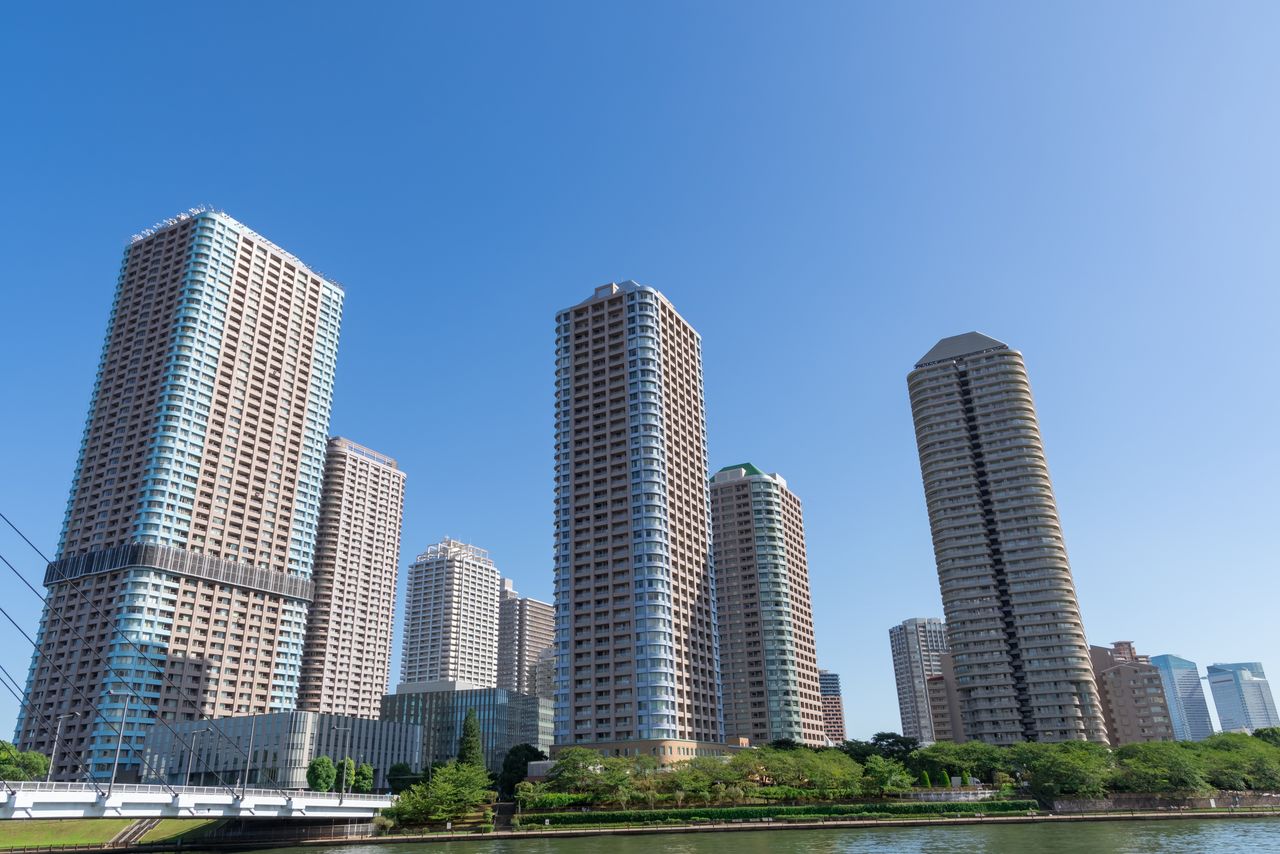 A cluster of high-rise condominiums in Chūō, Tokyo. (© Pixta)

Kicking the Can Down the Road

The COVID-19 pandemic has only exacerbated the rise in condominium and detached home prices in metropolitan areas as trends like remote work have increased demand, especially for more affordable and spacious dwellings in suburbs. However, this has highlighted a different problem with housing.

I have called attention to the growing risk of homes being flooded amid more frequent and extreme weather events as burgeoning tracts of low-lying farmland are converted into residential plots. The fact of the matter is that there is little in the way of municipal regulations preventing real estate firms from developing flood-prone agricultural land in outlying areas into housing lots. The government amended the City Planning Act in 2000, deregulating planning in the suburbs of large cities, effectively leaving it to the discretion of local authorities to regulate new residential developments. This produced a subsequent shift in many municipalities toward converting agricultural land in urban control areas, where urbanization is restricted, rather than developing and improving zones designated as urban promotion areas.

Against the backdrop of growing frequency in natural disasters, the government in 2020 revised sections of the City Planning Act to restrict new residential developments in urban control areas where there was a risk of flooding of 3 meters or more. However, some municipalities have delayed updating building ordinances for areas at high risk of flooding and other disasters as they woo new residents in a bid to bolster their populations.

Agricultural land is generally less expensive than that in established urban areas, particularly because much of it is located in low-lying areas that are prone to flooding. This makes it appealing as a source of affordable housing to real estate developers and municipalities looking to attract new residents, as well as to home shoppers in the market for affordable, spacious housing. However, continuing to prioritize such short-sighted needs comes at the expense of later generations, who will have to foot the bill when a major disaster strikes.

No discussion of housing stock can ignore the existence of Japan’s vast number of vacant houses. The quantity of existing homes that stand empty has more than doubled since 1993 to 8.49 million, a vacancy rate of 13.6% that is contributing to the glut of homes. The effective utilization of vacant houses in suburban areas that already have necessary infrastructure in place would benefit the market for used homes. Furthermore, knocking down dilapidated houses to make way for new ones would bolster housing inventory and offset the concentration of dwellings in urban centers. 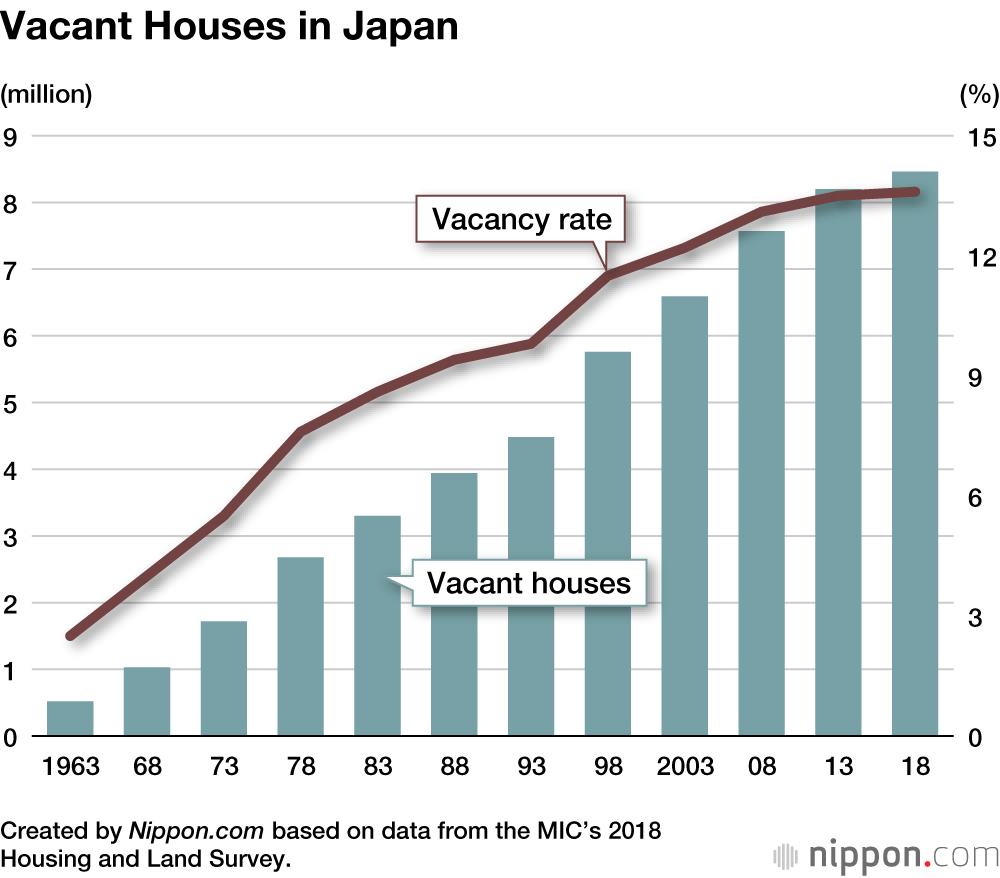 Returning vacant homes to the housing market or offering them as rentals makes common sense. But in reality the vast majority are excluded from real estate listings. A survey of owners reveals a strong tendency to let properties sit idle for reasons such as sentimental attachment, difficulty in cleaning out unused dwellings, and reluctance to let go of family land. In many cases, lingering inheritance issues complicate the situation, keeping the growing stock of vacant houses off listings even amid robust demand for affordable housing.

The problem is particularly acute in long-established communities, which typically boast a high level of disaster resiliency built over generations. Neighborhoods that developed during Japan’s period of rapid economic growth also tend have robust disaster countermeasures in place. But in these established districts, which were some of the first to be urbanized, the population is shrinking as residents age, and vacant homes are increasing, but owners are not willing to take advantage of them, preventing generational change in the district.

Consequentially, it has become difficult to make effective use of housing in areas with low disaster risk, despite the increasing demand for housing in these areas.

The reality, though, is that a number of these vacant homes are in such poor condition that they cannot be sold or rented. However, a survey of the market shows that with the help of real estate agents or NPOs who are willing to invest the time and energy in negotiating and winning the trust of owners, the rate at which vacant houses are leased, or transferred to people the owners are happy doing business with, is gradually increasing. Many municipalities encourage owners to list properties through “vacant home banks,” which provide information on vacant houses on their websites. Such efforts are beginning to produce positive results. The challenge is how to build momentum going forward.

The structural problems that have produced Japan’s excess housing stock have not changed significantly in the past five years, and continue to hamper the average person’s ability to buy a home. In particular, the yen’s continued depreciation raises the possibility that foreign investors will start snapping up real estate with the goal of selling it for a profit down the road, driving housing prices up still further.

To make home ownership a reality for large swaths of the populace, the government needs to focus on policies aimed at increasing the stock of affordable housing, rather than taking a one-size-fits-all approach. For instance, relaxing the floor area ratio for condominiums needs to take into consideration the supply of affordable housing for middle- and low-income groups both from the perspective of public welfare and return on investment. The United States offers an example, where the government and the major tech companies Google, Apple, Facebook, and Amazon are working to provide affordable housing.

Cities like Kyoto, which is planning to introduce a vacant house tax, are beginning to roll out new initiatives aimed at promoting the use of empty homes. It will be crucial for authorities to consider how best to balance the location and number of residential areas throughout broad urban regions as Japan’s population continues to decline and natural disasters become more frequent. How this will be done remains to be seen, but there is no question that the time has come to fundamentally rethink Japan’s housing policies and approach to urban planning, which have remained largely unchanged from the boom economy of the postwar era.

(Originally published in Japanese on October 3, 2022. Banner photo: A residential area in the Tokyo suburbs. © Pixta.)