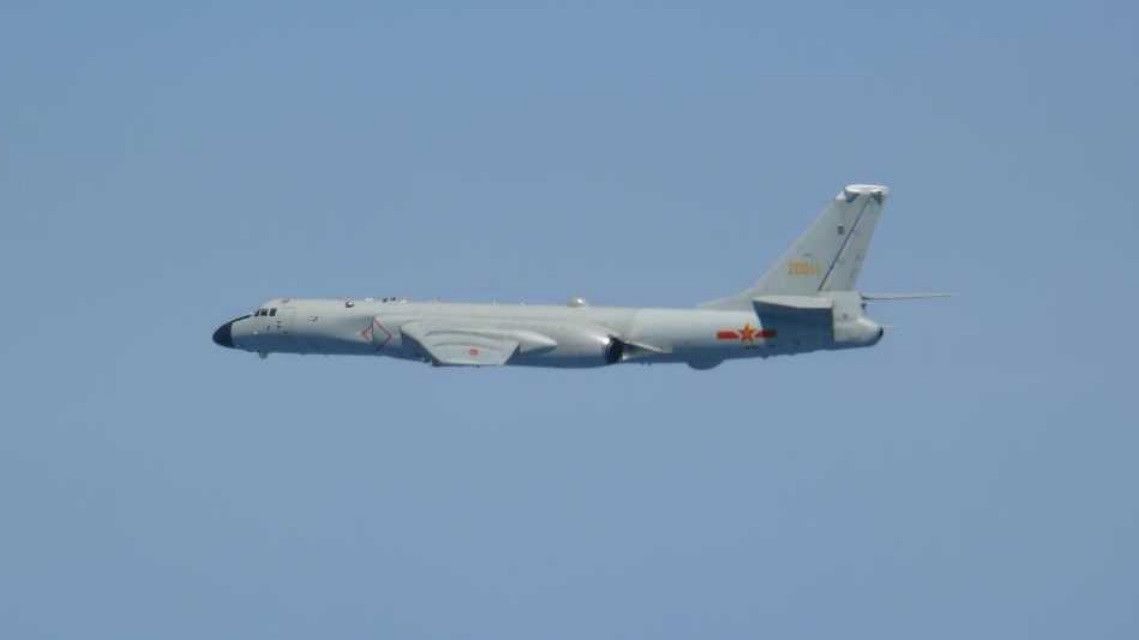 Japan and the Sino-Russian Challenge

Politics Sep 22, 2022
In the wake of Russia’s invasion of Ukraine, China and Russia have stepped up military cooperation, including joint patrols in the area around Japan. The author discusses the budding Sino-Russian partnership and its implications for Japan and the rules-based international order.

Russia’s full-scale military invasion of Ukraine, launched in February 2022, has been harshly condemned by most governments as a violation of international law that undermines the global order. Beijing is a notable exception. Indeed, in recent months China has ramped up cooperation between the People’s Liberation Army and the Russian Armed Forces via joint exercises and coordinated patrols in the area around Japan. Why are China and Russia building this military partnership? What are its implications for Japan’s security and Japanese defense policy?

From Adversaries to Strategic Partners

For much of the Soviet era, tensions simmered between Beijing and Moscow, escalating at one point to armed conflict over an ongoing border dispute. The deep-rooted distrust between the two countries is said to have persisted after the Soviet Union collapsed and was replaced by the Russian Federation in 1991. But the biggest obstacle to warmer relations was removed in 2004, when the two countries settled their last remaining territorial dispute.

In August 2005, China and Russia conducted their first joint military exercises, dubbed Peace Mission 2005, on the Shandong Peninsula. Consisting mainly of counter-terrorism drills, the Peace Mission exercises were thereafter carried out on a yearly basis under the auspices of the Shanghai Cooperation Organization (consisting of China, Kazakhstan, Kyrgyzstan, Russia, Tajikistan, and Uzbekistan).

More recently, the two countries have been inviting one another to participate in massive strategic exercises envisioning a large-scale combat situation. In September 2018, China took part in Vostok 2018, held in Russia’s Eastern Military District. Involving some 3,200 PLA personnel, 1,000 Chinese armored vehicles, and 30 Chinese aircraft—transported to Russia by rail and air—it was the largest overseas military exercise in Chinese history.

The PLA also took part in Russia’s Tsentr 2019 (in September that year), conducted in the Central Military District, and Kavkaz 2020 (also in September), in the Southern Military District. Russian forces’ first involvement in a major Chinese strategic exercise came in August 2021, when they were invited to take part in Joint Western 2021 in the western region of Ningxia. Such reciprocal participation in one another’s strategic exercises is indicative of a steadily deepening military partnership between China and Russia.

The Chinese and Russian militaries have also been conducting smaller-scale coordinated missions in the seas and airspace around Japan. In July 2019, two Chinese H-6 bombers and two Russian Tu-95 bombers flew southward from the Sea of Japan to the East China Sea, entering the overlapping Japanese and South Korean Air Defense Identification Zones. China’s Ministry of National Defense characterized the maneuvers as the first “joint strategic air patrol” by China and Russia. A similar patrol took place in December 2020. The third joint air patrol, in November 2021, extended the flight path out over the Pacific. A fourth patrol involving four Chinese bombers took place on May 2022. 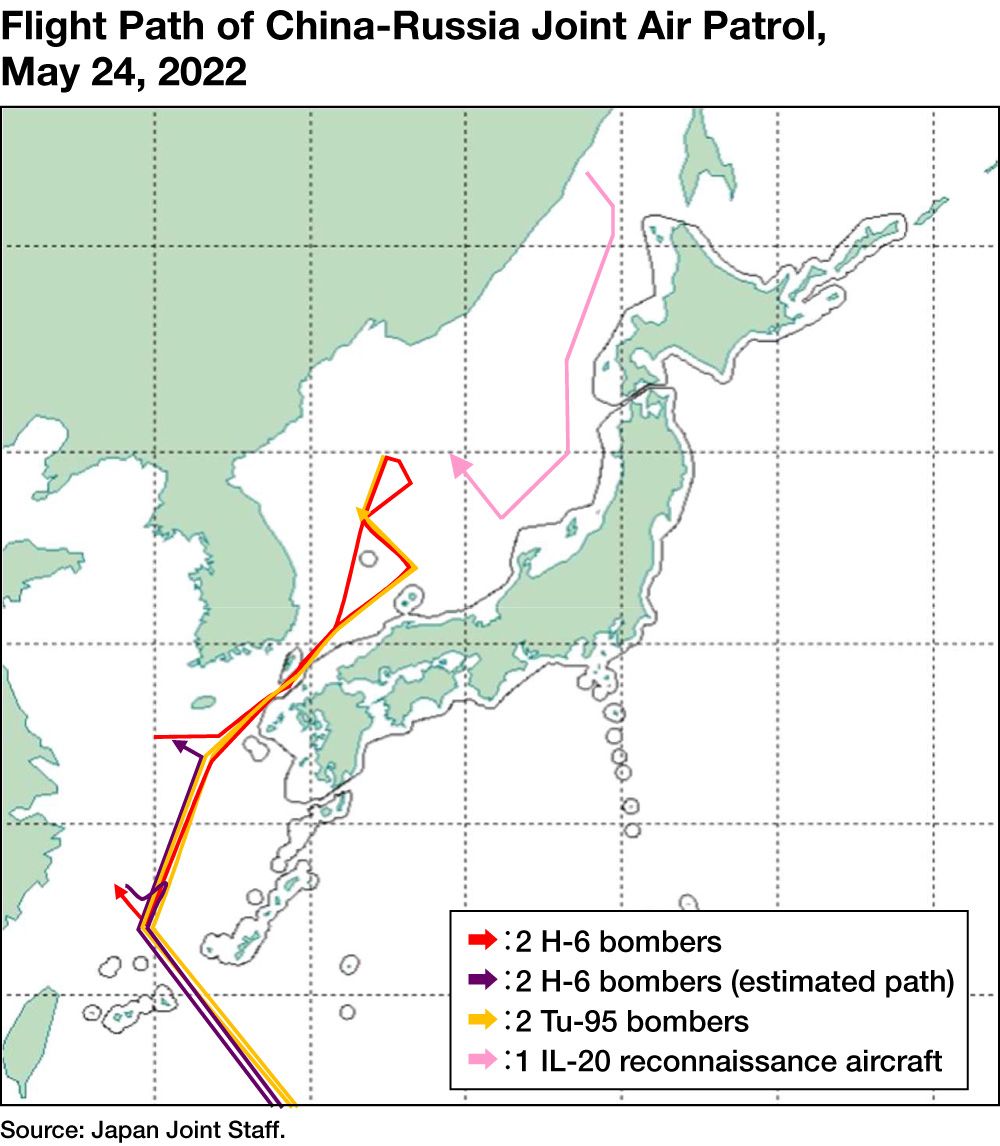 Coordinated naval missions are also on the rise. In the immediate wake of Joint Sea 2021, conducted in October in the Sea of Japan, five warships from each country circumnavigated Japan, sailing east through the northern Tsugaru Strait (between Honshū and Hokkaidō), down along Japan’s Pacific coast, and then west through the Ōsumi Strait in southern Kagoshima Prefecture. China’s media touted the mission as the two countries’ “first joint maritime patrol.” The following November 23, Chinese Defense Minister Wei Fenghe and his Russian counterpart, Sergei Shoigu, held a virtual meeting in which top military commanders summed up the bilateral maritime and aerial patrols held that year, and the two sides agreed to continue deepening strategic cooperation.

Purpose of the Partnership

What do China and Russia hope to gain by strengthening military cooperation through these joint exercises and patrols? The overriding purpose is doubtless to join forces in opposition to the United States, whose relations with both countries have soured over the past decade.

China’s efforts to alter the status quo in the East China Sea, the South China Sea, and Taiwan, backed by a rapidly expanding military capability, have been ratcheting up tensions between Beijing and Washington, which is intent on maintaining a free and open international order. Russia has been at loggerheads with the United States and other members of the North Atlantic Treaty Organization since its forced annexation of Crimea in 2014. In recent months, tensions with Russia have been greatly exacerbated by the latter’s invasion of Ukraine, while China has further provoked US ire through its massive August exercises involving the firing of ballistic missiles—a blatant effort to intimidate Taiwan. For China and Russia, bilateral cooperation is a way of dissipating the military pressure the United States can bring to bear.

Bilateral diplomacy is reinforcing the trend. The China-Russia joint statement released on February 4, 2022, following summit talks between President Xi Jinping and Putin (shortly before Russia launched its invasion of Ukraine), declared that both sides “oppose further enlargement of NATO” and that they “stand against the formation of closed bloc structures and opposing camps in the Asia-Pacific region.” In this way, China signaled its support for Russia in its power struggle with NATO in Europe, and Russia reciprocated by articulating its support for China in its East Asian struggle with the United States. In short, China and Russia have concluded that they can each serve their own strategic interests by joining forces to compete militarily with the United States and its allies.

For the Chinese military, cooperation with Russia could contribute substantially to the reforms it has been pursuing under Xi Jinping with the goal of turning the PLA into one of the world’s top fighting forces, on a par with that of the United States. Specifically, the PLA is working to strengthen its joint operational capability in order to build a force that can actually prevail in combat with a foreign adversary like the United States. Russia’s armed forces have more combat experience than China’s, and they are ahead of the PLA when it comes to reforms oriented to joint operational capability. In addition to putting this experience and know-how to use, China probably hopes to draw on Russia’s superior aerospace technology to modernize its own weaponry.

For Russia, defense cooperation is an important tool for stabilizing relations with China and maintaining parity in the bilateral relationship. Russian power has been in decline, and with relations with the United States at a nadir, Russia cannot afford to be at odds with China—a major power with whom it shares a long land border. By strengthening ties of mutual dependence in the realm of defense, Moscow can minimize the potential threat China poses to Russia while at the same time commanding respect from Beijing by demonstrating Russia’s usefulness from a military standpoint. The maritime and air patrols being conducted in the area around Japan can also be seen as a way for Moscow to persuade domestic and foreign observers that Russia is a great power on a par with China.

Japan Needs Its Own Deterrent Capability

If Japan wishes to protect its own territory and sovereignty, it must view the growing military cooperation between China and Russia as a serious security concern. After all, Russia persists in illegally occupying Japan’s Northern Territories, while China continues to brandish its naval power in hopes of changing the status quo vis-à-vis Japan’s Senkaku Islands (claimed also by China and Taiwan, though administered by Japan). Especially concerning is the recent rise in intimidating behavior aimed at Japan, including joint patrols in Japan’s immediate vicinity and the successive appearance of Chinese and Russian naval vessels in the contiguous zone around the Senkakus last July. Given the evident direction of the China-Russia military partnership, there is a clear need for Japan to boost its own deterrent capability, independent from that of the United States.

The Japanese must recognize, further, that this partnership between China and Russia—two great nuclear-armed military powers that are using military might to expand their own sphere of influence—poses a serious challenge to the existing rule-based world order. Many experts believe that we are in the early stages of a long-term global struggle between the forces determined to defend and strengthen the existing order, led by the United States and its allies, and those seeking to overthrow it, led by China and Russia.

In this long-term context, Japan needs to assume a leading position among the forces defending the status quo. This means bolstering the Japan-US alliance, of course, but it also means stepping up security cooperation with Australia, India, Singapore, South Korea, Taiwan, Vietnam, and other countries that oppose military coercion and support the status quo in the Indo-Pacific. We should also strengthen ties with NATO with a view to building a worldwide cooperative framework in support of the rules-based international order.

(Originally published in Japanese. Banner photo: One of the Chinese H-6 bombers that joined with Russian bombers in patrolling the airspace around Japan on May 24, 2022. Courtesy of Japan Joint Staff.)