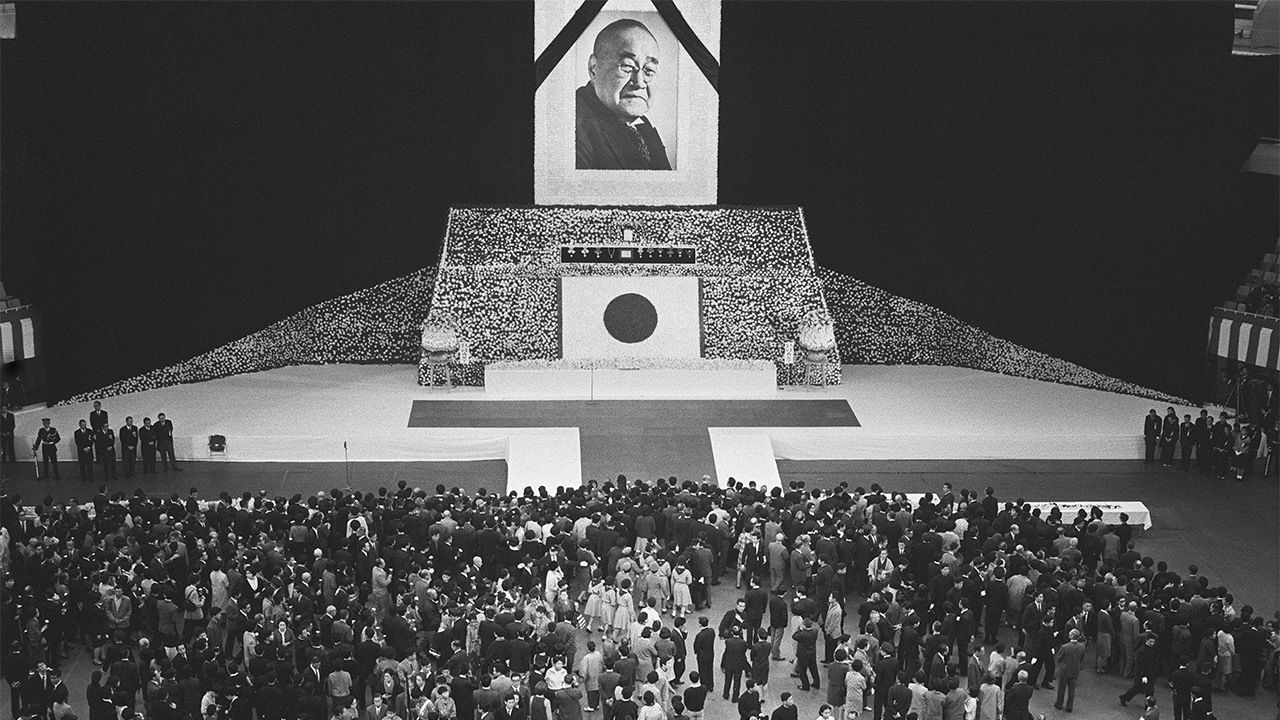 Death and Politics: The History of State Funerals in Japan

Politics History Sep 22, 2022
The state funeral for Abe Shinzō, due to take place on September 27, is only the second for a former Japanese prime minister in the postwar era. This article looks back at the history of such ceremonies from their roots in the late nineteenth century.

A state funeral is held at government expense as a major ceremony to mourn the death of someone who has performed distinguished work in the service of the nation. Many people consider it the highest honor to receive such a funeral.

Japan became a modern nation state after the Meiji Restoration of 1868. A decade later, in 1878, one of the most powerful Meiji leaders, Ōkubo Toshimichi, was killed by discontented former samurai. The previous year, the Meiji government had faced the Satsuma Rebellion, an uprising led by Saigō Takamori, a key player in the Restoration. While it managed to successfully suppress this, it was on a highly unsteady footing.

Itō Hirobumi—later Japan’s first prime minister—and others planned a grand funeral at great expense for Ōkubo to convey the message that he was mourned by the emperor and many citizens, thereby subduing rebellious tendencies. Some 1,200 people gathered for the funeral ceremony at Ōkubo’s residence, in what was the prototype for later state funerals. From this early stage, they gained an association with serving the political ends of powerful figures of the day.

The first formal state funeral took place in 1883 for Iwakura Tomomi, another leading figure in the Meiji Restoration. This was held as a state ceremony by order of the grand minister of state, who was the highest official in the Meiji government at that time. Further state funerals followed for other major figures in the powerful faction of leaders from the former provinces of Satsuma (now Kagoshima Prefecture) and Chōshū (now Yamaguchi Prefecture).

In 1909, Itō Hirobumi was assassinated by a shooter in Harbin Station in northeast China, and subsequently received a state funeral. A great crowd filled Hibiya Park in Tokyo to overflowing, mourning the death of the Meiji leader in a foreign country.

Then in 1912, Emperor Meiji passed away and received the first modern state funeral for a Japanese emperor.

As Emperor Taishō, the successor to Emperor Meiji, began to suffer serious ill health, the government rushed to establish legislation for funerals for emperors and imperial family members. In October 1926, a state funeral law was enacted only two months before Emperor Taishō’s death.

The law had just five articles. The first established that state funerals would be given for emperors, empresses, and former empresses. The third stated that they may be given for distinguished service recognized by the emperor. However, the fifth said that the prime minister could hold state funerals with the agreement of the emperor, meaning that the government of the time could effectively make decisions on the matter.

In the militaristic atmosphere of the 1930s and 1940s, there were two state funerals for Japanese naval heroes. In 1934, the first was held for Tōgō Heihachirō, who played an instrumental role as the admiral of the Japanese Combined Fleet in the Russo-Japanese War of 1904–5. The second was in 1943 for Admiral Yamamoto Isoroku, who oversaw the surprise attack on Pearl Harbor in 1941 that brought the United States into World War II. His plane was shot down over the Solomon Islands and his death concealed for around a month. However, his state funeral was used to try and boost wartime morale. Yamamoto was the first person from outside the imperial family and aristocracy (Tōgō had been made a peer) to receive a state funeral. 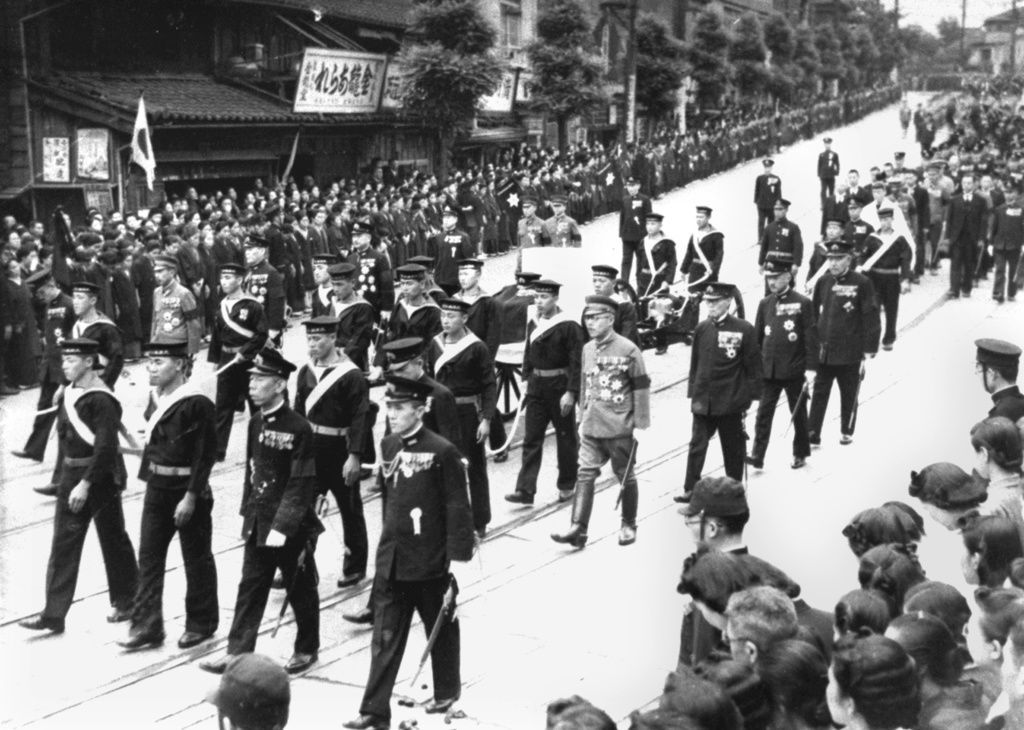 The state funeral for Admiral Yamamoto Isoroku passes through Hibiya Park in Tokyo on June 5, 1943. (© Kyōdō)

In 1947, with the promulgation of a new postwar Constitution, the state funeral law became invalid. Meanwhile, article 25 of the same year’s new Imperial House Law stated: “When the Emperor dies, the Rites of Imperial Funeral shall be held.” Thus, it was clear that the emperor would receive a state funeral, but ill-defined as to who else might.

In 1951, while Japan was still occupied under the authority of the General Headquarters of the Supreme Commander for the Allied Powers, Emperor Shōwa’s mother Empress Dowager Teimei passed away. Under the former law, she would have received a state funeral, but with no legislation in place, Prime Minister Yoshida Shigeru decided not to give one for her. Even so, as the ceremony was paid for from the imperial family’s public budget rather than its private funds, although unofficial, it ended up as a quasi-state funeral.

Yoshida apparently believed that state funerals could only be given for the emperor under the new Constitution. However, he himself would receive the first state funeral of the postwar era.

Yoshida served as prime minister for a total of seven years in two periods from 1946 through 1954, negotiating the end of the US occupation and Japan’s return to independence. He died on October 20, 1967. At the time of Yoshida’s death, Satō Eisaku was prime minister. Satō, a protégé of Yoshida, had looked up to him throughout his life, and he decided that his mentor should receive a state funeral.

While it was likely not a direct motive for this decision, Yoshida had also protected Satō during a bribery scandal. Satō was secretary-general of the Liberal Party when he was indicted on charges of receiving bribes from shipbuilding companies in 1954. Yoshida pressured the minister of justice not to approve prosecution until Satō was acquitted in a general amnesty marking Japan’s admission to the United Nations in 1956.

Two weeks before Yoshida’s death, Prime Minister Satō had set off on a tour of Southeast Asia and Australia. He was in Manila when he heard the news and decided to push for an unprecedented postwar state funeral. He wrote in his diary of immediately calling Chief Cabinet Secretary Kimura Toshio in Tokyo to make preparations.

According to Kyōdō News, Satō also contacted Liberal Democratic Party politician Sonoda Sunao, the vice speaker of the House of Representatives, some hours after hearing of Yoshida’s death. A Tokyo Shimbun report from September 5, 2022, says that he instructed Sonoda to persuade the leader of the Japan Socialist Party, the largest opposition force, to agree to a state funeral, given that there were no legal grounds, and that Sonoda won that agreement the same day. Satō cut his tour short and returned to Japan in the evening of the following day. He went directly to Yoshida’s residence in Ōiso, Kanagawa Prefecture, to pay his respects.

On Monday, October 23, he convened an extraordinary cabinet meeting, where he led the decision to hold a state funeral for Yoshida. He then went straight to the funeral mass held by Catholic members of Yoshida’s family (Yoshida himself had expressed the wish to become Catholic while alive, and received his baptism immediately after passing away) before changing from his mourning clothes and visiting Emperor Shōwa, where he spoke about his trip and funeral plans for Yoshida. Apart from the Japanese Communist Party, there was little active opposition to the idea among opposition parties, so Satō was able to settle the matter just three days after Yoshida’s death.

On October 31, a state funeral was held for Yoshida Shigeru at Nippon Budōkan in Tokyo, attended by more than 5,000 people, including Crown Prince Akihito and Crown Princess Michiko, other imperial family members, and foreign dignitaries. As chair of the funeral committee, Satō delivered a eulogy, talking of how Yoshida had worked to rebuild Japan after defeat in war and foreign occupation, and that the restoration of the country’s independence was the greatest achievement of the postwar period.

A Lack of Consensus

Without Satō’s enthusiastic action, Yoshida would never have had a state funeral 11 days after his death. Now, 55 years later, opinion polls show many oppose a similar ceremony planned for Abe Shinzō, despite the manner of his death. This is due in part to mixed views on his achievements, as well as ongoing discussions about his relationship with the Unification Church.

Satō worked quickly to win the agreement of opposition parties and others, but there have been no similar moves by Prime Minister Kishida Fumio, the funeral committee chair in Abe’s case, and the difference in their efforts is clear.