Sports Society Jan 11, 2023
Mongolia-born sumō wrestler Tamawashi took a surprising victory in the September 2022 tournament, becoming the oldest-ever rikishi to win a basho. Fans celebrated his success, but it points to serious issues the sumō world needs to face if it wants to remain relevant to athletes and fans alike in years to come.

Tamawashi, a relatively low-ranked sumō wrestler at the rank of number three maegashira, won his second-ever Emperor’s Cup at the September 2022 basho, defeating a string of top-ranked rikishi for the prize. His championship followed wins by Terunofuji in May and Ichinojō in July, making it the third in a row won by a grappler of Mongolian origin. It was also the second-straight tournament won by a maegashira, something that had not happened in more than 30 years.

Tamawashi also ranks third for consecutive basho appearances, at 1,456 tournament matches, and if all goes well, in two years’ time he could also surpass the record of 1,630 consecutive appearances set by Aobajō, who rose as high as sekiwake. 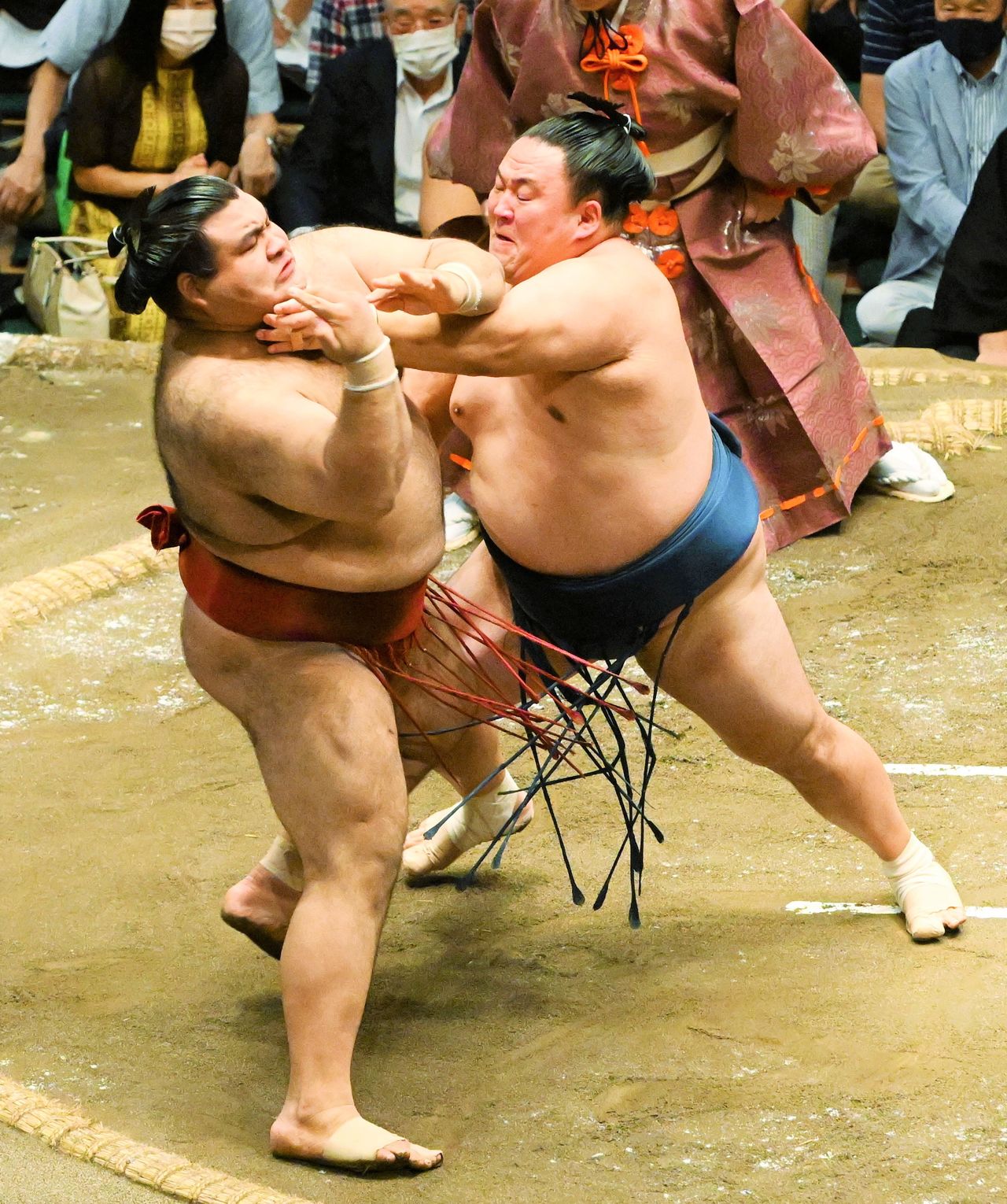 Tamawashi pushes number four maegashira Takayasu out of the ring to win on the tournament’s final day, September 25, 2022, at Tokyo’s Ryōgoku Kokugikan. (© Jiji)

Tamawashi has been lauded in particular for staying in top physical condition and retaining mental focus despite the ongoing pandemic, which has made keeping to regular practice routines difficult.

In the sumō world, communal living is the rule, and COVID-19 inevitably spread in the close quarters of sumō stables. To try to contain infections, degeiko practices between rikishi from different stables were banned starting in March 2020; the ban was lifted only in June 2022. However, PCR tests are still mandatory the day prior to attending degeiko, as are rapid antigen tests over degeiko periods lasting multiple days. These infection control measures are similar to those adopted at the start of the pandemic, leading rikishi to complain that these requirements are hindering their ability to practice properly.

During the pandemic, rikishi at stables with a large complement of members were able to practice more or less as usual, but the ban on degeiko put wrestlers from smaller stables at a disadvantage, as they could not polish their techniques or increase their strength through friendly sparring with similar-caliber fighters from other stables. Tamawashi, who comes from the tiny Kataonami stable, was disproportionately affected by this situation.

Tamawashi is the sole sekitori, a wrestler ranked in the top two makunouchi and jūryō divisions, at his stable, which has only four rikishi in total; the other members are all in the lower-ranking makushita, jonidan, and jonokuchi divisions.

But Tamawashi kept himself in fighting form by taking on two of his stable’s junior wrestlers at a time and asking his stable master, the oyakata Kumagatani, to stand for his butsukari chest-thrust practice. While many rikishi from smaller stables groused that the pandemic interfered with their training, Tamawashi came up with ways to compensate and keep up his strength and techniques, as his outstanding record at the September basho demonstrated. 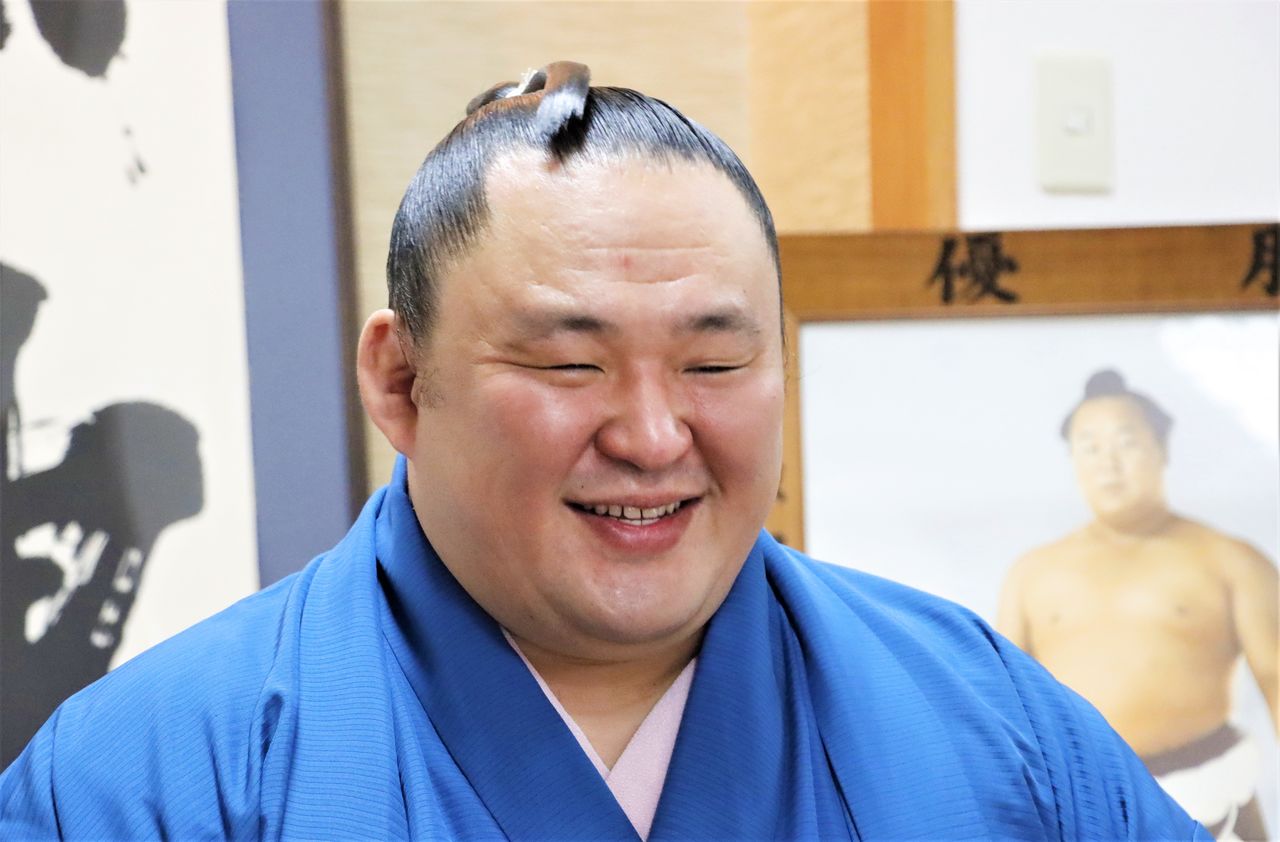 Tamawashi is all smiles at a press conference on September 25, the day after the tournament. (Courtesy of the Japan Sumō Association; © Jiji)

Incidentally, recently retired yokozuna Hakuhō, who won his last tournament at the age of 36 years and 4 months, is in third place behind Kyokutenhō and Tamawashi in the age rankings as measured since 1958, when the current format of six tournaments a year was adopted. All three hail from Mongolia, and all established their longevity records in the past 10 years.

Many older sumō fans believe that rikishi now have longer active careers than before. Being able to enjoy an extended run in a grueling sport is of course a welcome development, but from a different perspective, this points to a worrying trend. 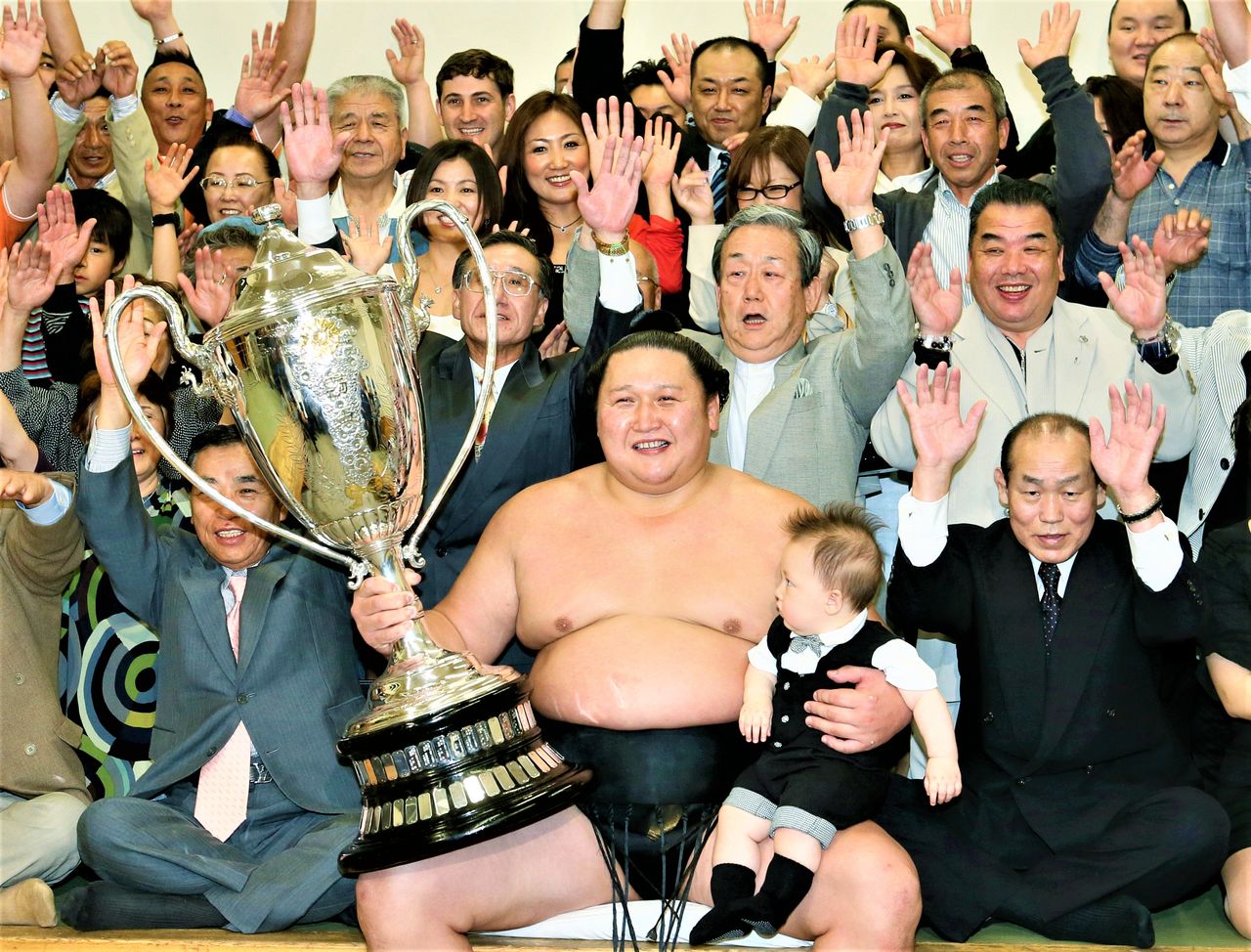 Mongolia-born Kyokutenhō, then a seventh-ranked maegashira, celebrates at the Ryōgoku Kokugikan in Tokyo on May 20, 2012, after winning the summer basho, setting an age record that Tamawashi would break a decade later. (© Jiji)

From the Edo period (1603–1868) up through the 1920s, sumō tournaments only took place twice a year. After World War II, tournaments were gradually added to the yearly schedule to keep up with the quickening pace of daily life. When the current cycle of six tournaments a year started in 1958, the average age of makuuchi top-division wrestlers was 29.7 years.

More tournaments meant more chances for promising fighters to rise to the top. The September 1958 basho was the memorable occasion on which three teenage wrestlers, Togashi (later the yokozuna Kashiwado), Wakachichibu, and Toyonoumi, all advanced to the top ranks.

Other talented young rikishi continued to emerge, displacing older veterans at the top of the banzuke rankings. By the January 1970 basho, no wrestlers in competition were in their thirties. The average age of makuuchi had fallen to 25.6 years, four years younger than just 12 years previously. This trend continued for some time, up until the January 1993 basho, when the average age of makuuchi fighters was 26.7 years.

But average age began to rise again starting around 2000. At the September 2021 basho, the average age of makuuchi fighters was over 30, and had risen to 30 years and 2 months by the next basho in November that year. By the November 2022 basho, which Tamawashi won, the average age had gone back to 29 years and 3 months, placing things basically where they had been in 1958, when the six-tournament annual system kicked off.

The higher average age among rikishi today is no doubt due to progress in sports medicine and the fact that more of them are taking better care of their health. But some younger oyakata take a pessimistic view, fearing that sumō could fade away in 10 or 20 years’ time because of the higher ages of rikishi. Why? A chronic lack of new young blood means fewer feisty younger grapplers who can test themselves against the veterans occupying the top of the banzuke, thereby becoming the veterans of the future.

Healthy Turnover a Half-Century Ago

Whenever sumō experienced a wave of popularity in the past, more youngsters would be attracted to the sport, and new recruits would flood in.

In 1963, when the yokozuna Taihō was wildly popular, a record 375 young men took the new recruit examination, of whom 250 passed, another record. Even so, fully 125 candidates did not make the cut—under much stricter criteria than today, when virtually everyone who takes the exam is accepted. But even so, many boys freshly graduated from junior high school took the examination, hoping for a chance to be part of sumō. In 1992 and 1993, the popularity of brothers Wakanohana and Takanohana also attracted many applicants, with candidate numbers topping 200 in both those years. 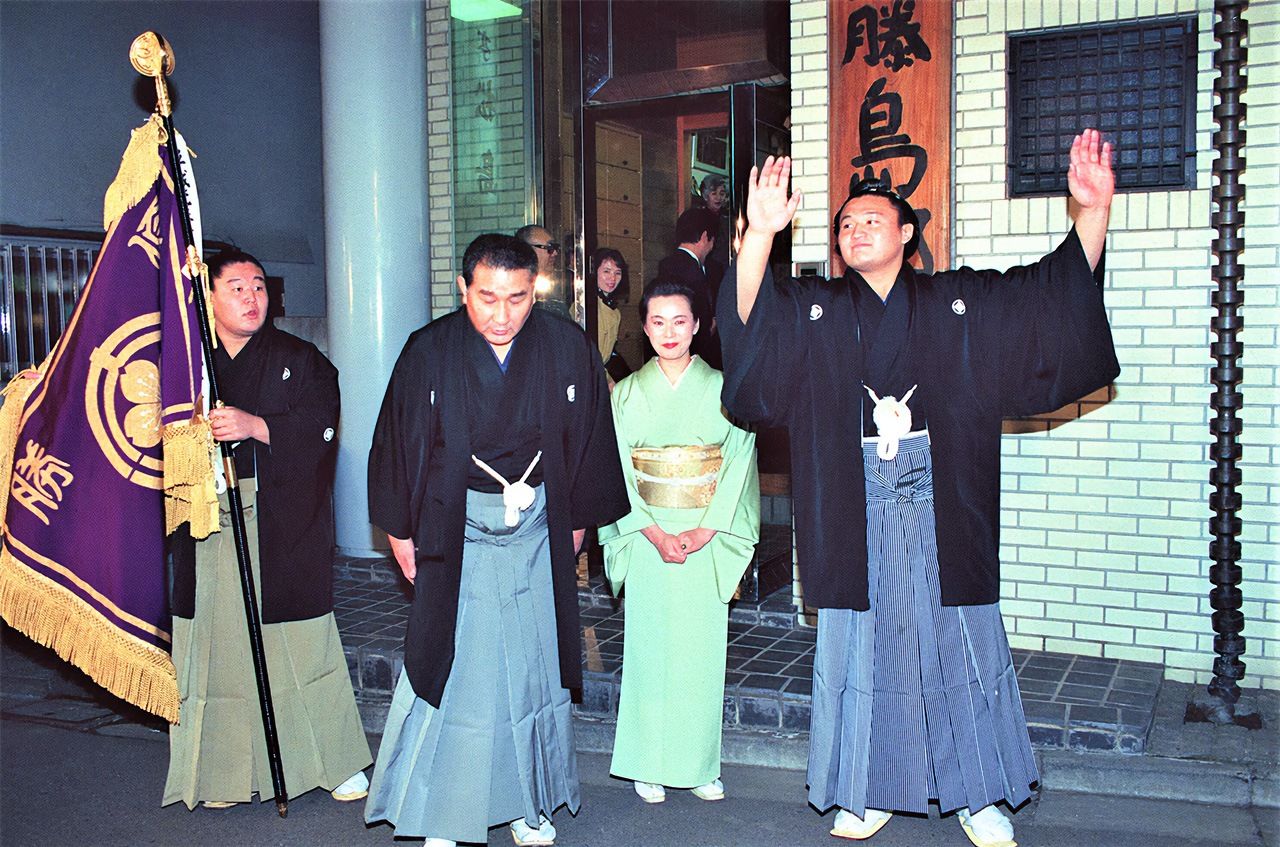 At right, Takahanada (later the yokozuna Takanohana) celebrates becoming the youngest-ever rikishi to win a basho, the 1992 New Year tournament. From left, his older brother Wakahanada (who would go on to be the yokozuna Wakanohana) holds the victory banner, with the brothers’ parents, the oyakata Fujishima (later Futagoyama) and Fujita Noriko, between them. Taken in Nakano, Tokyo, on January 26, 1992. (© Jiji)

Looking back over the half-century between 1955 and 2005, there were only three years in which the number of aspiring recruits fell below 100. In contrast, would-be entrants numbered over 150 in 21 years over the same period. But for 17 straight years starting in 2006, there have been fewer than 100 youths applying to join sumō every year, despite greatly relaxed recruitment criteria.

And now, even more lenient criteria apply to new recruits starting in March every year, when many candidates graduate from junior high school and look to enter the sumō world. Many are aged around 15, with more growing left do to. In that case, recruits only need be 165 centimeters tall and weigh 65 kilograms or more. Even so, only 61 new recruits joined the ranks in 2021, a field which would have been further winnowed down to 34 if the pre-2000 criteria had applied.

The dearth of new recruits also has a significant impact on stable management. Stables’ main source of income is in the form of subsidies, including stipends to cover their charges’ living expenses and upkeep of the practice ring, from the Japan Sumō Association. All told, stables receive ¥1.8 million per rikishi, therefore incentivizing stables to keep fighters on their roster as long as possible, even those with few prospects for advancement.

This has led to a massive increase in the number of lower-ranking rikishi in their thirties and forties. One who left sumō earlier this January, Hanakaze, had reached the ripe old age for the sport of 50, and was still at jonidan rank.

In the days when new recruits were plentiful, there was a “30-and-out” rule, meaning that if a rikishi had not advanced to makushita rank after 30 tournaments, meaning five years, the stable would lose its stipend for that man. Most wrestlers under makushita rank in those days were in their teens and twenties, so if the rule were put into place again today, it would decimate the banzuke ranks.

The quality, not just the quantity, of new recruits, is also poorer, due mainly to the declining birthrate and the diversity of sports that youths can now engage in.

In the old days, about the only options for strapping young men who wanted to make a living at sports were baseball and sumō. In his later days as Futagoyama oyakata, the renowned yokozuna Wakanohana I, father to Wakanohana and Takanohana, was known to encourage youths to try sumō by saying “There’s gold to be found under the dohyō ring.”

In fact, some rikishi were very talented at other sports and could have made a name for themselves in high-level competitions. For example, Takanohana I (1950–2005), who rose to the rank of ōzeki, set a Japan junior high school record in swimming for the 100-meter butterfly and was in line to be selected to participate in the 1968 Olympic Games in Mexico City. Unlike today, though, even a gold medal would not have been enough to guarantee a livelihood later.

In a memoir published in 1975, Takanohana I recalled that swimming offered only an uncertain future, and that he ultimately decided to go into professional sumō.

Today, there are many more avenues to a professional career in sports, including soccer, rugby, and basketball. Even athletes in amateur sports like swimming or track and field can go on to lucrative careers as coaches or media commentators if they excel in their discipline.

I believe that the JSA should start thinking of paying rikishi more. The money these athletes earn today is paltry in comparison to what professional baseball players get. But more importantly, the Association must do more to popularize sumō.

Sumō is called Japan’s national sport, but nowadays it is rare to see children grappling in a makeshift ring in a park or schoolyard. There are also fewer than 5,000 amateur sumō players.

The JSA is a nonprofit, public-interest body whose stated mission is to promote the way of sumō and contribute to public welfare. Unless it does more to encourage children’s familiarity with sumō by setting up practice rings in schools and so forth, professional sumō’s prospects are bleak.

Sumō, which blends sport with traditional culture, is a spectacle we can all be proud of. As a sport, sumō needs to be promoted more vigorously, so that it can be passed on to future generations and thrive. All parties involved in this pastime, be it at the professional or the amateur level, should give serious thought to its future.

(Originally published in Japanese. Banner photo: Tamawashi, at right, rides an open-top car in a victory parade after winning the September tournament. Taken on September 25, 2022, outside Tokyo’s Ryōgoku Kokugikan. © Jiji.)