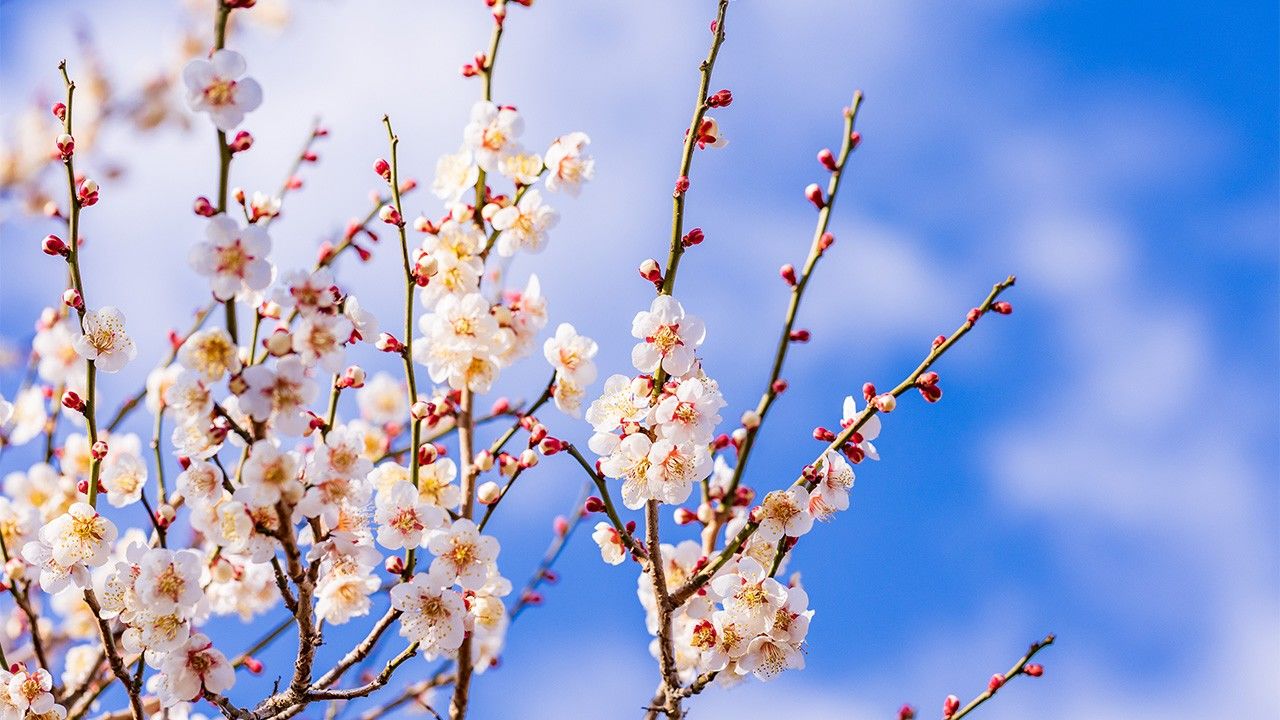 The Japanese Economy in 2023: Gradual Recovery on Track with Firm Domestic Demand

Economy Politics Society Jan 6, 2023
The COVID-19 pandemic is far from over, but restrictions on people’s movements are no longer in place, and society is returning to normal. The economist Takumori Akiyoshi notes the impact this has on travel, leisure, and other consumption, along with corporate IT investment, as factors behind a predicted gradual, lasting economic recovery.

Japan’s real GDP grew by fits and starts in 2022, influenced in part by the effects of the COVID-19 pandemic. GDP recorded negative growth in the January–March and July–September quarters, but increased an annualized 4.5% against the previous quarter in April–June. Despite concerns about an eighth wave of the pandemic, movement restrictions are not expected, and inbound tourism demand and nationwide measures to support travel suggest that GDP will achieve positive growth in October–December.

In the Bank of Japan’s December Tankan (Short-Term Economic Survey of Enterprises), large manufacturers’ assessment of business conditions declined 1 point from September to +7. This was the fourth straight quarterly decline, the consequence of rising costs ensuing from higher raw material costs and from the depreciation of the yen. 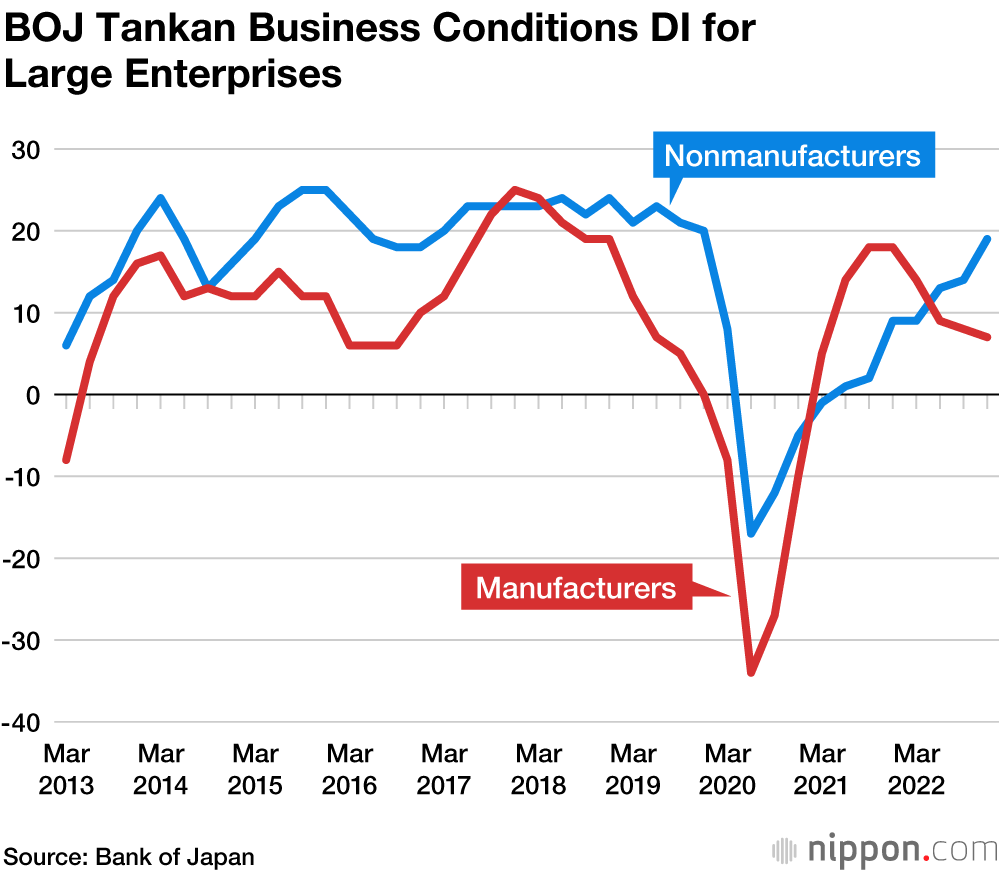 Meanwhile, the business conditions DI of large nonmanufacturers increased 5 points from September to +19 in December, a record high since the +20 recorded in December 2019 before the COVID-19 pandemic hit. Supported by inbound demand and travel support measures, such sectors as accommodations and eating and drinking services improved.

The business conditions outlook was +1 for all industries. Companies are maintaining their cautious stances due to the many uncertainties about the world economy, such as its future direction, inflation trends, the monetary policies of US and European central banks, the direction of currency markets, and the pandemic situation.

The Japan Center for Economic Research publishes a monthly ESP Forecast that averages the predictions of some 40 private-sector economists. A review of the past 18 years of these forecasts shows that the average take of the economists polled is seldom far off the mark, making this a highly reliable report. 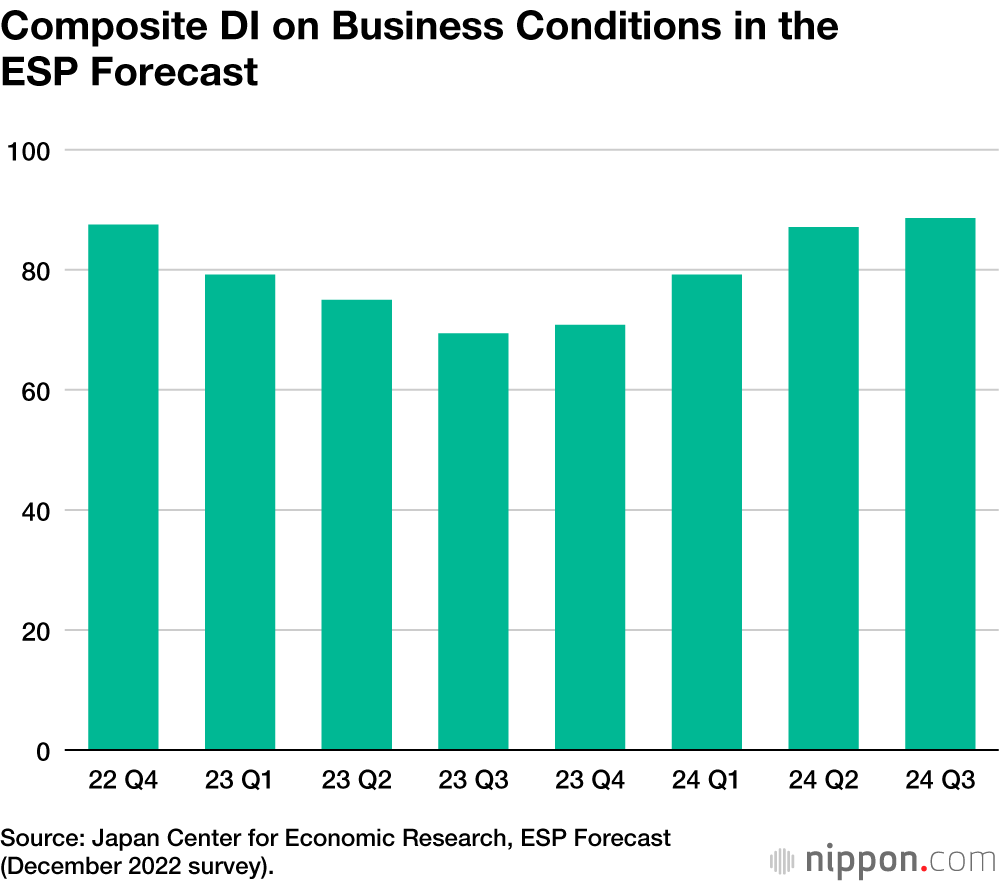 Influenced by the tightening of monetary policy, the growth rate of real GDP is foreseen to average a slower 0.52% in 2023 in the United States. As a result, while external demand is expected to contribute –0.1% to Japan’s GDP, private-sector demand will contribute a firm 1.0%, and the contribution of domestic demand as a whole is expected to average 1.2%. Personal consumption is predicted to be firm as demand pent up from the COVID-19 pandemic boosts travel and leisure expenditures. In addition, capital spending that was postponed due to future uncertainties is predicted to grow, centering on digital transformation, or DX, investments to adapt to the demands of a new age.

Slowing US Economy a Risk

The Japan Center for Economic Research also releases a number of special ESP Forecasts. In odd months since September 2020, JCER has asked economists to select and rank three risks for Japan’s economy. The risk ranking first up to the September 2021 forecast was the situation for COVID-19 infections. Beginning with the November 2021 forecast, the first-place risk was replaced one after another in successive forecasts. With the November 2022 forecast, however, the worsening of the US economy placed first for a third straight forecast. The large and repeated interest rate hikes of the Federal Reserve are causing economists to predict that the US economy will either enter a recession in the first half of 2023 or will slow considerably. Taking second place in the November 2022 forecast was the worsening of the Chinese economy.

The December ESP Forecast included a composite diffusion index on business conditions expressing the consensus view of economic forecasters. This index trended mostly in the 70s in the successive quarters of fiscal 2023, which is far above 50, the dividing line between an expanding and contracting economy. The consensus view of forecasters appears to be that the expansion will continue.

When asked whether the turning point (peak) to follow the trough of May 2020 has already passed, all economists replied that it has not yet passed. The probability of the peak arriving within the next year was an average of 37.6%. This indicates that most economists are anticipating a relatively prolonged recovery.

A Future Proceeding from Positive Challenges

The kanji of the year selected by a nationwide vote for 2022 was the character 戦 (sen, ikusa, tatakau), with such meanings as battle, struggle, and war. The kanji of the year tends to reflect the bright and dark aspects of the economic conditions experienced that year. In its dark aspect, the kanji is part of the word sensō (war), bringing to mind Russia’s invasion of Ukraine. It can also refer to the struggle to deal with the resulting surge in energy and grain prices giving rise to inflation as well as the struggle to address the COVID-19 pandemic.

The kanji is also associated with positive meanings, being used in terms like nessen, bringing to mind the “heated matches” of the soccer World Cup and the Beijing Winter Olympic Games. In chōsen (challenge), it recalls the baseball records pursued by Ohtani Shōhei and Murakami Munetaka. These are instances of the character that give courage to people, that stir their emotions, and that act as a positive factor for the economy. 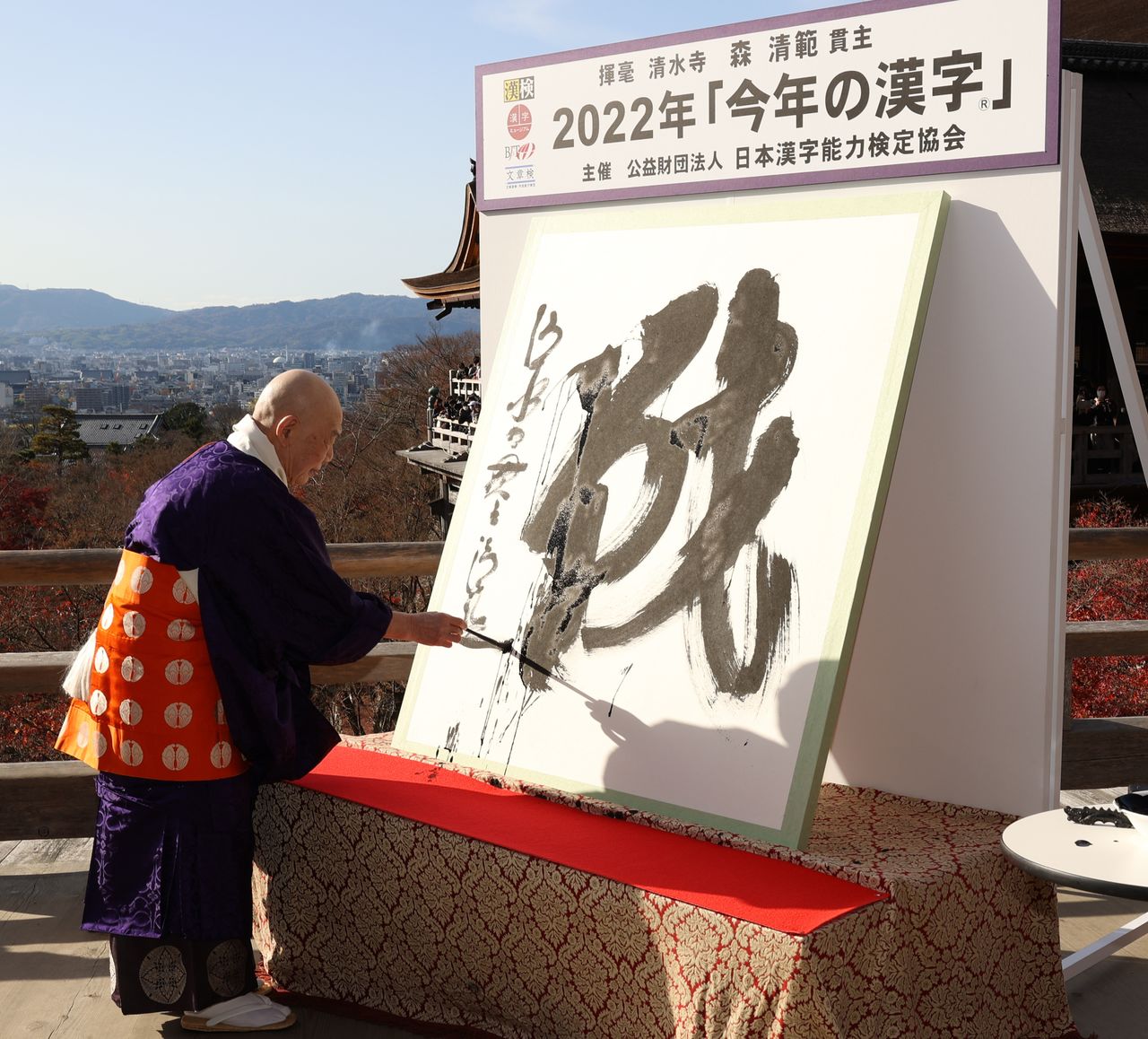 Chief Buddhist priest Mori Seihan of the temple Kiyomizudera writes the character sen, chosen as the kanji of the year for 2022, on December 12 in Kyoto. (© Jiji)