End of an Era: Events and Ceremonies Connected with Japan’s Imperial Accession

Society Jan 18, 2019
A number of ceremonies and events are planned for 2019 in connection with the imperial transition.

On January 2, Emperor Akihito’s last New Year address to the general public before his abdication on April 30 was held at the Imperial Palace. He was joined for the greeting on the balcony of the Chōwaden hall by Empress Michiko, his successor Crown Prince Naruhito, and other imperial family members. According to the Imperial Household Agency, 154,800 people attended the event, making it the largest number since the Heisei era began in 1989. Five appearances were planned; however due to such a large number of visitors, this was increased to seven.

Greetings to the general public have been given twice a year since 1948; at New Year and on the emperor’s birthday. Since Emperor Akihito announced in August 2016 that he wished to abdicate, the number of attendees has rapidly increased. 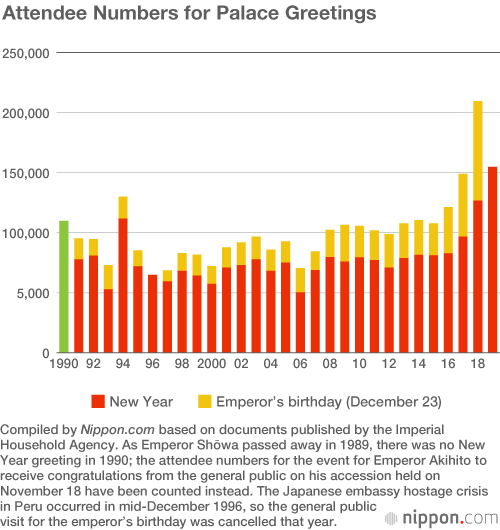 There are only four months left in the final year of Heisei. A series of ceremonies and events connected with Emperor Akihito’s abdication and the accession of Crown Prince Naruhito are scheduled with the main events listed here.

January 7: Thirtieth Anniversary of Emperor Akihito’s Accession
February 24: Ceremony to Celebrate 30 Years of Emperor Akihito’s Reign (National Theater)
An event organized by the government for the general public.
April 1: Announcement of New Era Name
April 30: Abdication Ceremony (Imperial Palace)
A ceremony for the whole nation to mark the abdication of Emperor Akihito.
May 1: New Emperor’s Accession Ceremony (Imperial Palace) (National Holiday in 2019)
A rite through which Crown Prince Naruhito will inherit the sacred sword and jewels, the imperial seal, and the state seal as evidence of accession. The sacred sword and jewels are two of the three sacred treasures that are passed to successive emperors.
May 1: First Audience (Imperial Palace)
A ceremony for the new emperor to meet the three heads of government (legislative, executive, and judicial) acting as representatives of the people.
October 22: Enthronement Ceremony (Imperial Palace) (National Holiday in 2019)
A ceremony to formally announce the accession of the new emperor.
October 22: Imperial Procession by Motorcar
The new emperor and empress will ride in a convertible car in a parade around the palace environs.
From October 22: Court Banquets (Imperial Palace)
Court banquets to be held over four days for overseas dignitaries, the three heads of government, and cabinet members to celebrate the accession of the new emperor and convey their congratulations.
November 14 and 15: Daijōsai, First Ceremonial Offering of New Rice (Imperial Palace)
Every autumn the Niinamesai festival is held, in which the emperor makes an offering of new rice. This is an important ritual conducted historically by successive emperors to pray for rich rice harvests and national peace. In the year that the new emperor is enthroned, it gains extra significance and is known as Daijōsai.
April 19, 2020 - Ceremonial Investiture of the Crown Prince (Imperial Palace)
A ceremony to announce the investiture of the new emperor’s brother Fumihito, Prince Akishino, as crown prince and first in the line of succession to the throne.