Keeping a Step Ahead: Men in Osaka and Women in Kanagawa Score Top for Walking

Lifestyle Jan 22, 2019
Walking has been touted as a simple way for elderly people to maintain health. Once people are in their sixties, though, the average number of steps they walk each day drops drastically and continues to decrease with age.

Experts recommend a healthy dose of daily physical activity like walking as a way to stay healthy and stave off the effects of aging. A National Health and Nutrition Survey conducted by the Ministry of Health, Labor, and Welfare shows that on average Japanese adult men walk 6,846 steps a day, while women walk 5,867. The figures for people between the ages of 20 and 59 years old vary only slightly. However, once people reach their sixties and retirement age, averages dip rapidly, with people in their seventies walking at least 2,400 steps fewer compared to those in their fifties. 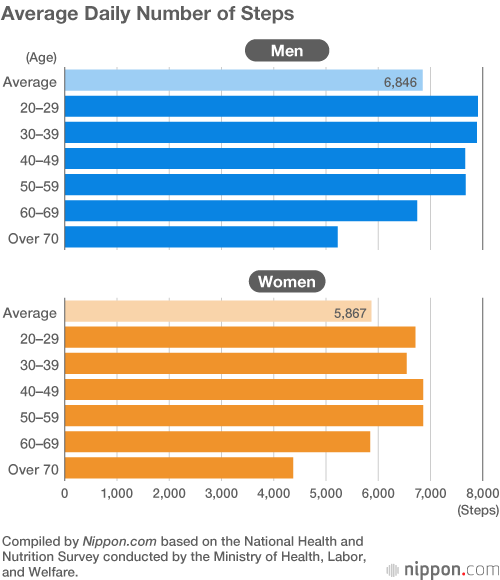 Even accounting for yearly fluctuations, there is an obvious gradual drop in averages for older age groups over the mid- to long term. The decrease in steps walked is thought to be largely the result of an uptick in sedentary senior citizens as Japanese society grays. 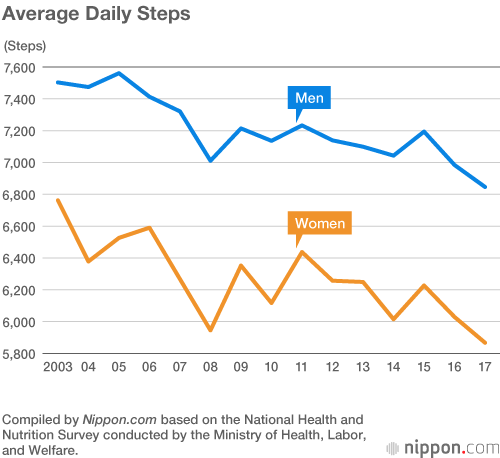 The National Health and Nutrition Survey compared the average number of steps by prefecture. Osaka ranked highest for men and Kanagawa for women, with Kōchi having the lowest tally for both men and women.

Densely populated urban areas like the Tokyo metropolitan and Kansai regions that have highly developed public transport scored highest as it is more common for people in to walk to and from stations. Conversely, rural areas had lower counts as people typically rely on cars to commute and go shopping, reducing the number of steps they take.

Average Number of Steps by Prefecture

Compiled by Nippon.com based on the 2016 National Health and Nutrition Survey conducted by the Ministry of Health, Labor, and Welfare. (Kumamoto Prefecture was not included in the survey due to an earthquake there in April of that year.) 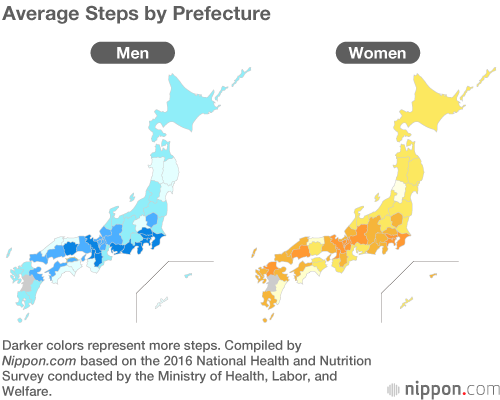