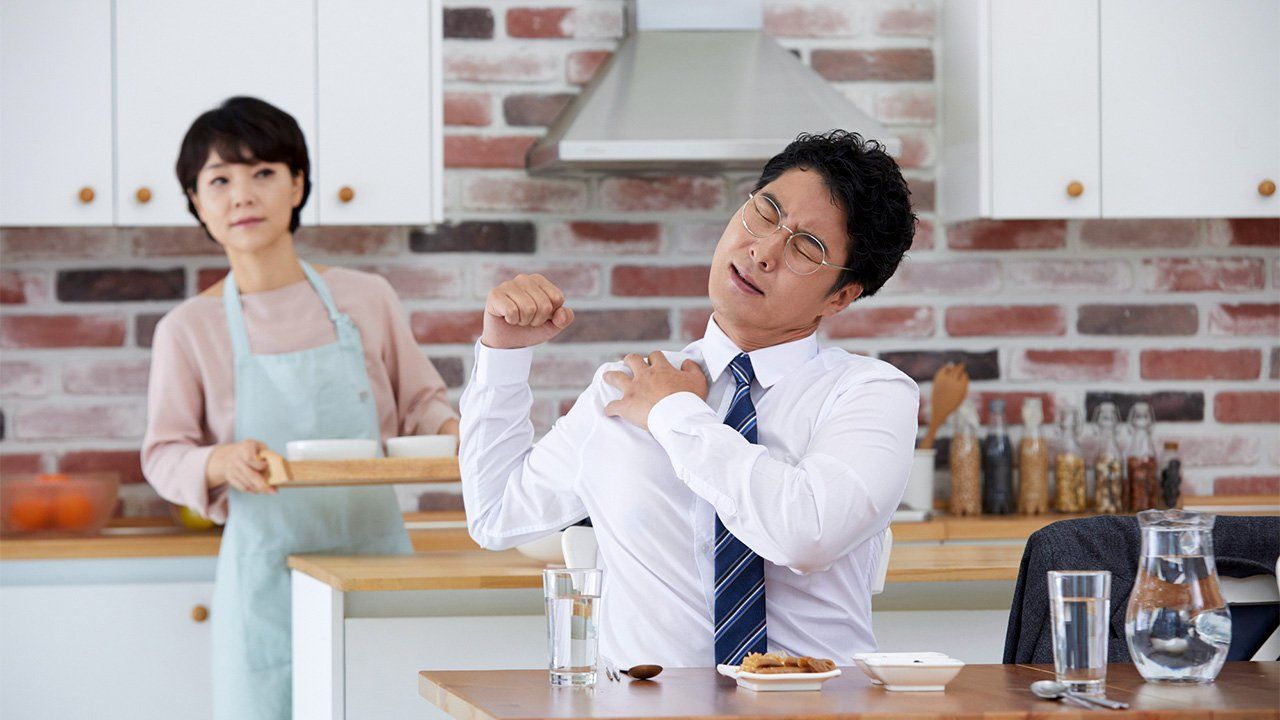 Middle-Aged Japanese Men and Their Expectations of Homemade Meals

Society Family Jul 29, 2019
A recent survey found that women still do most of the cooking in Japanese households.

Back in 1975, an instant noodle commercial with the slogan, “I cook, he eats,” was taken off the air after criticism that it promoted traditional gender roles. The attitudes evoked by the phrase, however, still remain firmly entrenched despite the growing number of women in the workplace.

When asked what they did about weekday evening meals as part of a survey on eating and cooking habits, 93.9% of Japanese men in their forties and 86.6% of those in their sixties gave the response, “a family member prepares dinner.” While multiple answers were possible, the rates were significantly lower for those who said they cooked their own dinner—10.6% for men in their forties and 17.9% for men in their sixties, compared with nearly 100% for women in both those age groups—a clear indication of how many middle-aged men depend on others to cook for them. 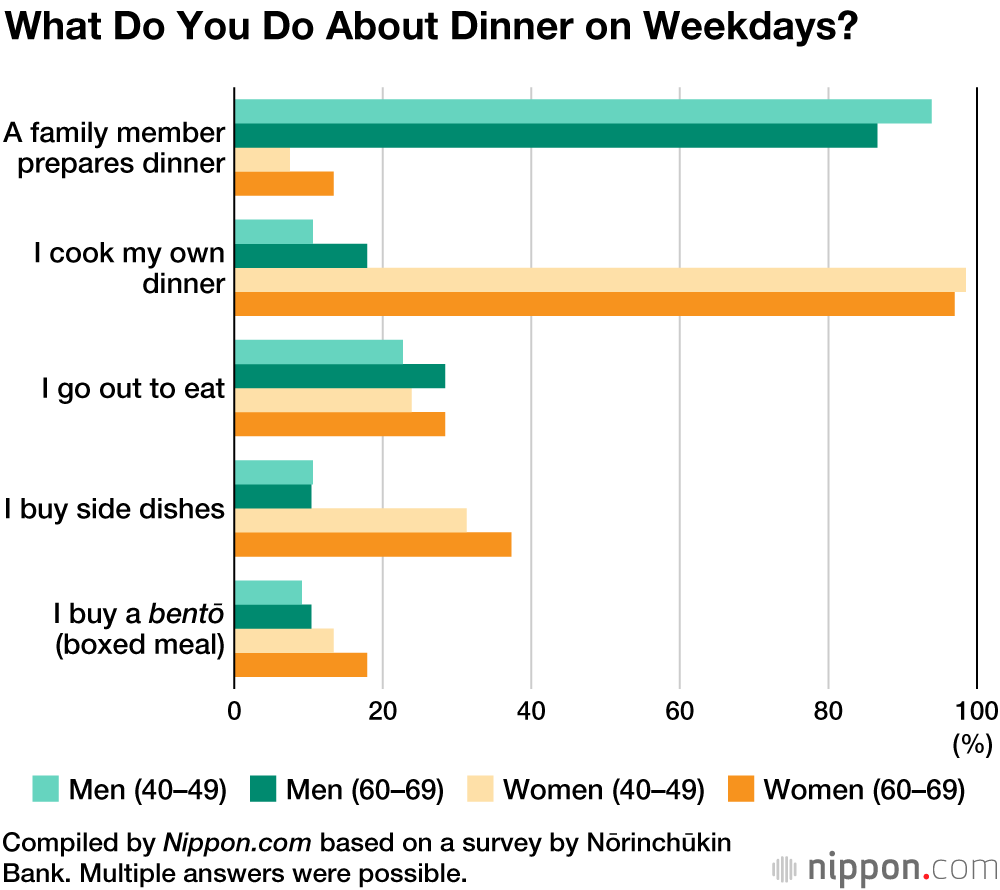 Roughly 70% of men in their forties said they “hardly ever” prepared or helped to prepare weekday evening meals with only around 20% saying they did so once or twice a week. Asked why they didn’t cook or help in the kitchen, the top responses were because, “Someone else will do it,” “I get home late,” and “I don’t know how to cook.” 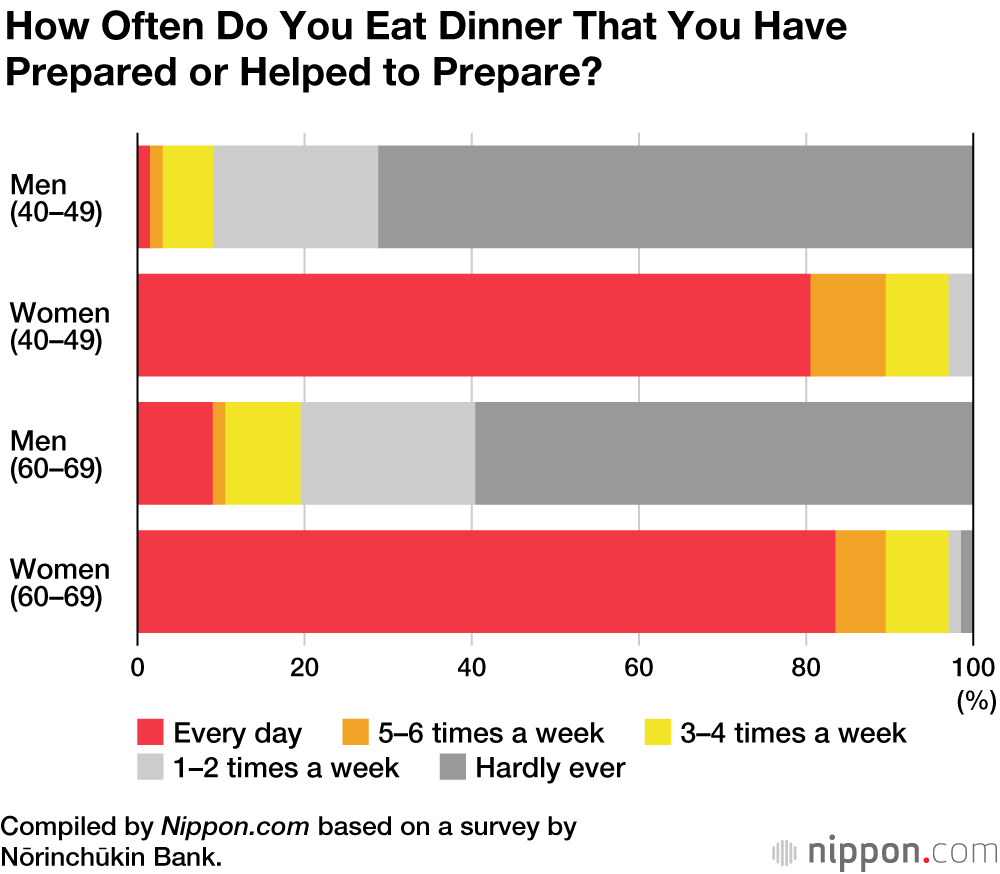 Respondents were asked what was required to ensure food safety. Men in their forties and sixties said it was necessary to buy fresh food and check expiration and “use by” dates. More than a third in each of the two cohorts also said that rather than using preprepared items, as much as possible should be prepared by the cook.

It appears that though these men rarely prepare weekday meals, they are keenly aware of the importance of food safety and tend to assume that their family will use fresh domestic food products in the meals they prepare. The government purports to promote gender equality, but housework continues to be done primarily by women, despite the growing numbers of women in the labor market.

Compiled by Nippon.com based on a survey by Nōrinchūkin Bank. Multiple answers were possible.

The survey on eating and cooking habits targeted 400 men and women in their twenties, forties, and sixties. While the survey questions covered a broad range of topics, this article is limited to responses by those in their forties and sixties concerning evening meals.