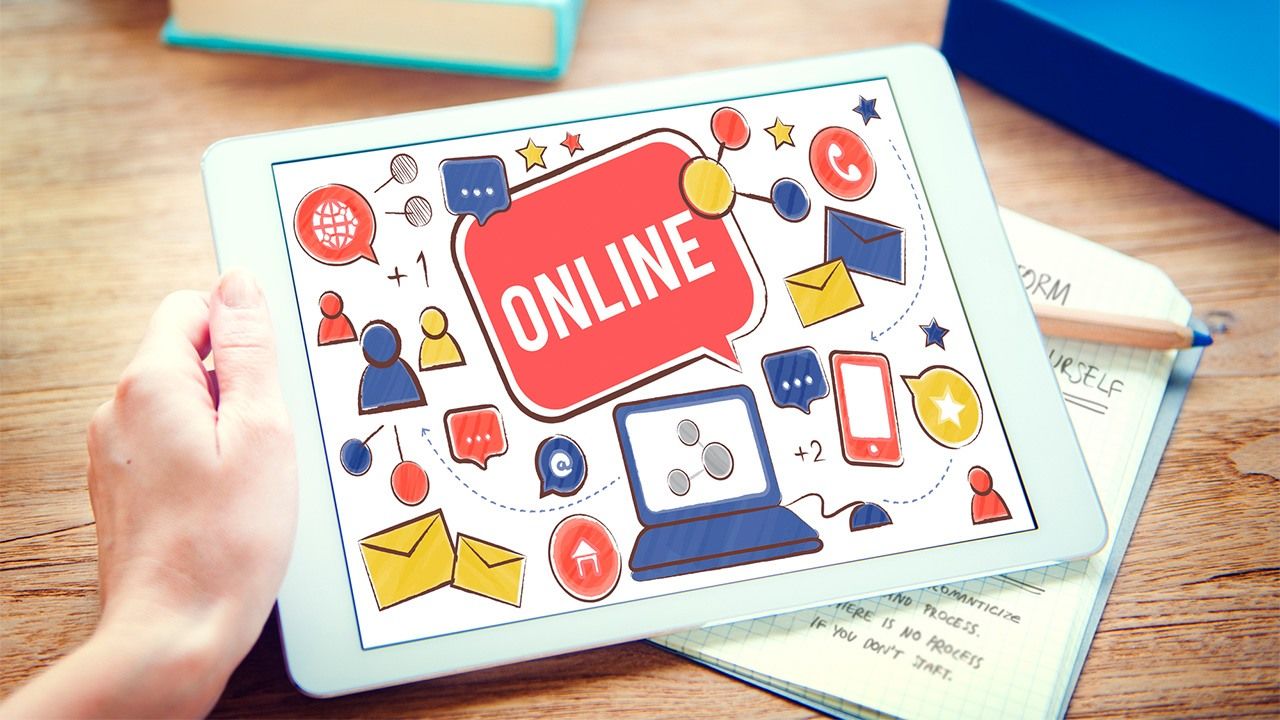 TV Still Well Ahead of the Internet in Japanese Media Popularity

Society Oct 30, 2019
Real-time television viewing is still by far the most popular media in Japan according to a fiscal 2018 survey.

A fiscal 2018 survey found that the most popular form of media among Japanese people was real-time television, with respondents spending on average 156.7 minutes watching on weekdays and 219.8 minutes on holidays (including weekends). While weekday viewing has been on a downward trend, holiday viewing has somewhat increased. Second most popular was the Internet, with people spending an average of 112.4 minutes online on weekdays and 145.8 minutes on holidays. Internet usage has increased consistently since the survey began in 2012.

The survey is conducted by the Ministry of Internal Affairs and Communications’ Institute for Information and Communications Policy, together with researchers at the University of Tokyo and other institutions. It targets 1,500 randomly selected men and women aged 13 to 69, who are directly handed the survey sheets that are then collected from them a few days later. The fiscal 2018 survey was conducted in February and March 2019. 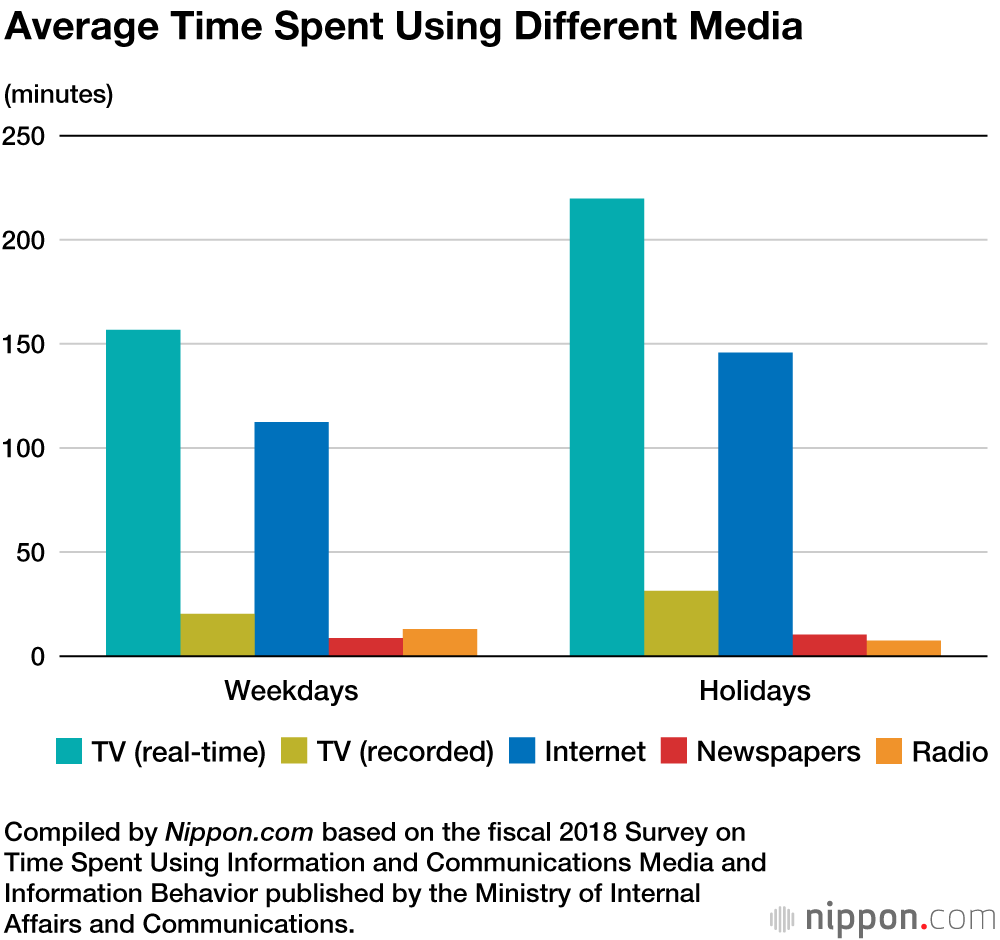 On weekdays, Internet users spent most time on email and social media, averaging 30.8 minutes and 26.7 minutes, respectively. On holidays, they spent longest on video posting and sharing sites like YouTube, averaging 36.6 minutes, followed by social media at 35.6 minutes.

The most popular social-media services and apps were Line, used by 82.3% of those surveyed, followed by Twitter at 37.3%, Instagram at 35.5%, and Facebook at 32.8%. Instagram in particular has been growing in popularity, rising over 10 percentage points compared to its 25.1% user rate in the previous survey. 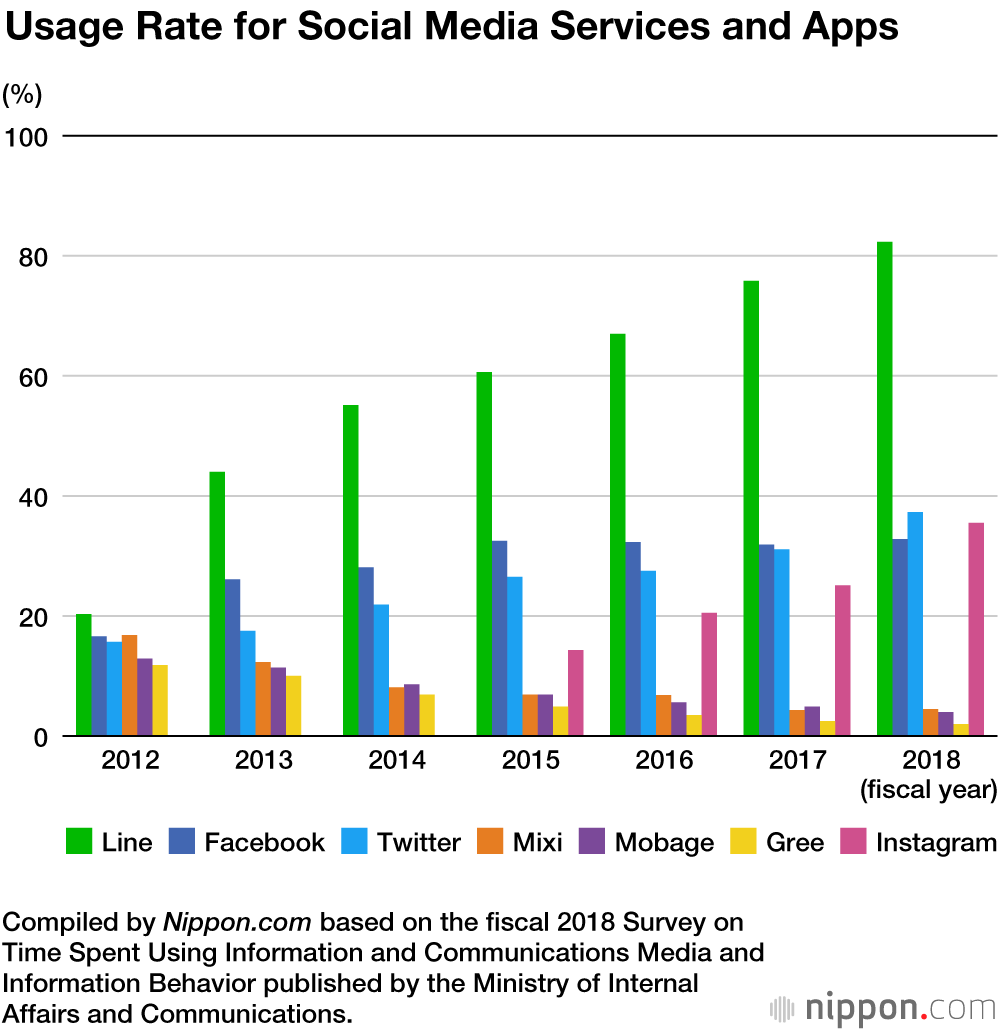 Newspapers were trusted by 68.6% of those surveyed, followed by 63.7% for television, 32.2% for the Internet, and 16.8% for magazines. Although the degree of trust has fluctuated somewhat for each type of media, their respective rankings have remained unchanged since the last survey.