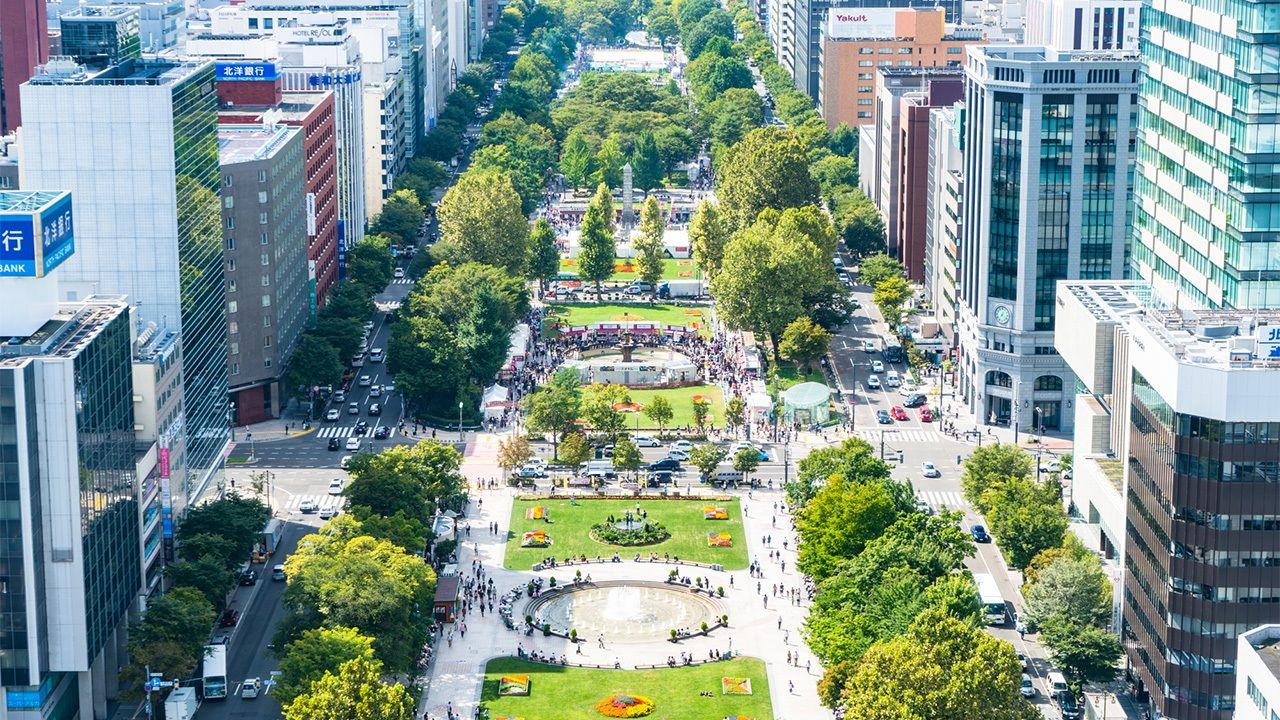 Olympic Heatwave Possible Even for Events Relocated to Sapporo

Sports Society Tokyo 2020 Oct 25, 2019
As the 2019 summer in Sapporo was hotter than normal, Olympic organizers should be cautious of a possible heatwave if events are relocated to the northern city.

On October 16, the International Olympic Committee announced plans to make Sapporo the venue for the 2020 Tokyo Olympics marathon and race walking. Concerns over a heatwave in Tokyo have grown after the World Athletic Championships were held in Doha, Qatar, in September. Despite the marathon and race walks starting at midnight, a large number of athletes had to drop out due to the high temperatures.

This year’s minimum and maximum temperatures for Tokyo and Sapporo during the period July 24 to August 9 (the same dates that the Tokyo 2020 Olympics will be held) clearly show Sapporo’s cooler climate. The lowest temperature in Sapporo was between 20 and 25 degrees, while in Tokyo almost every day was over 25 degrees. Despite the marathon and race walks being scheduled for the early morning in Tokyo, athletes would need to persevere through temperatures of higher than 25 degrees. 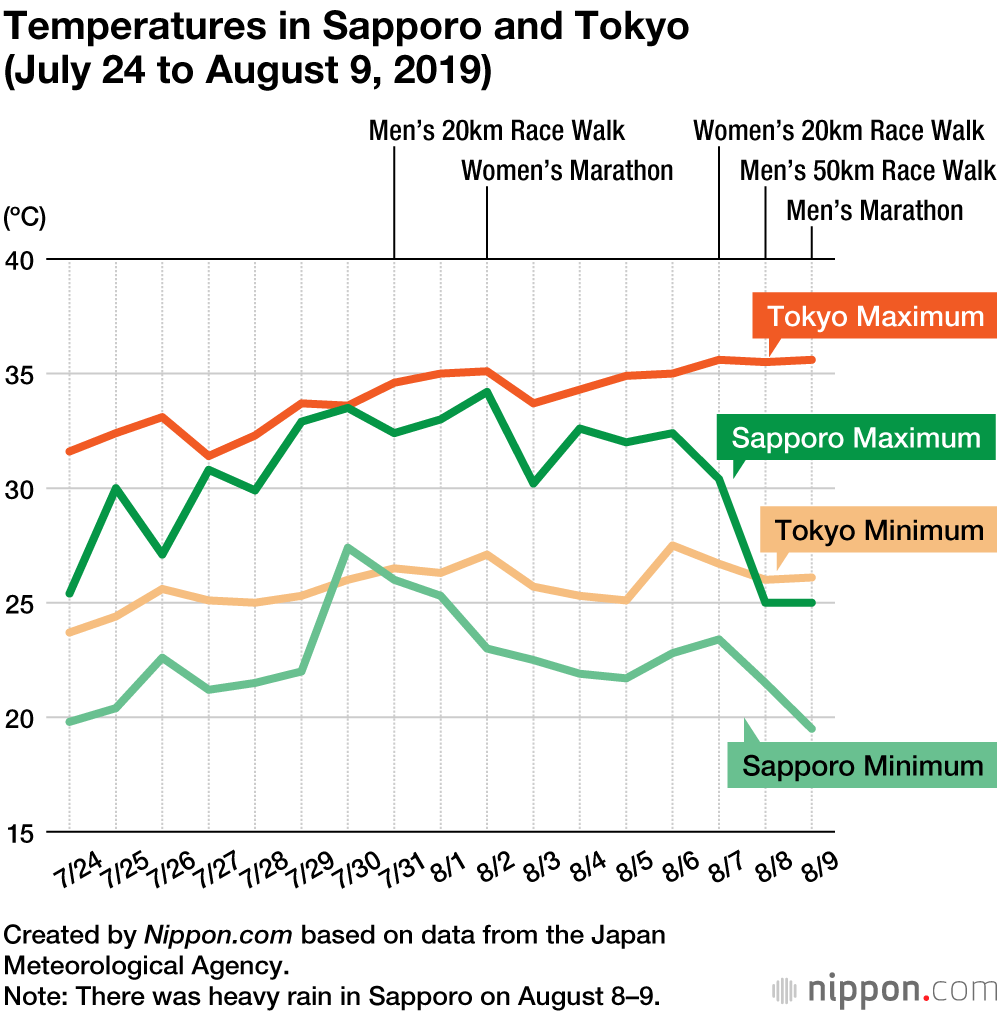 It is possible to take a more long-term comparison of the two cities’ temperatures. Every decade, in years ending with 1, average temperatures for the preceding 30 years are published in World Meteorological Organization member countries. The figures for the 30-year period from 1981 to 2010 for the Olympic dates in Tokyo and Sapporo show both the maximum and minimum temperatures for Sapporo were 4–6 degrees lower.

According to this data, in an average year, Sapporo’s minimum temperature remained 20 degrees or lower. Yet in 2019 the temperature was significantly higher, only falling below 20 degrees on two days. While the average maximum temperature for 1981–2010 in Sapporo was around 26–27 degrees, in 2019 most days were more than 30 degrees. Rising temperatures in Sapporo should also be taken into account when considering Olympic event timing. 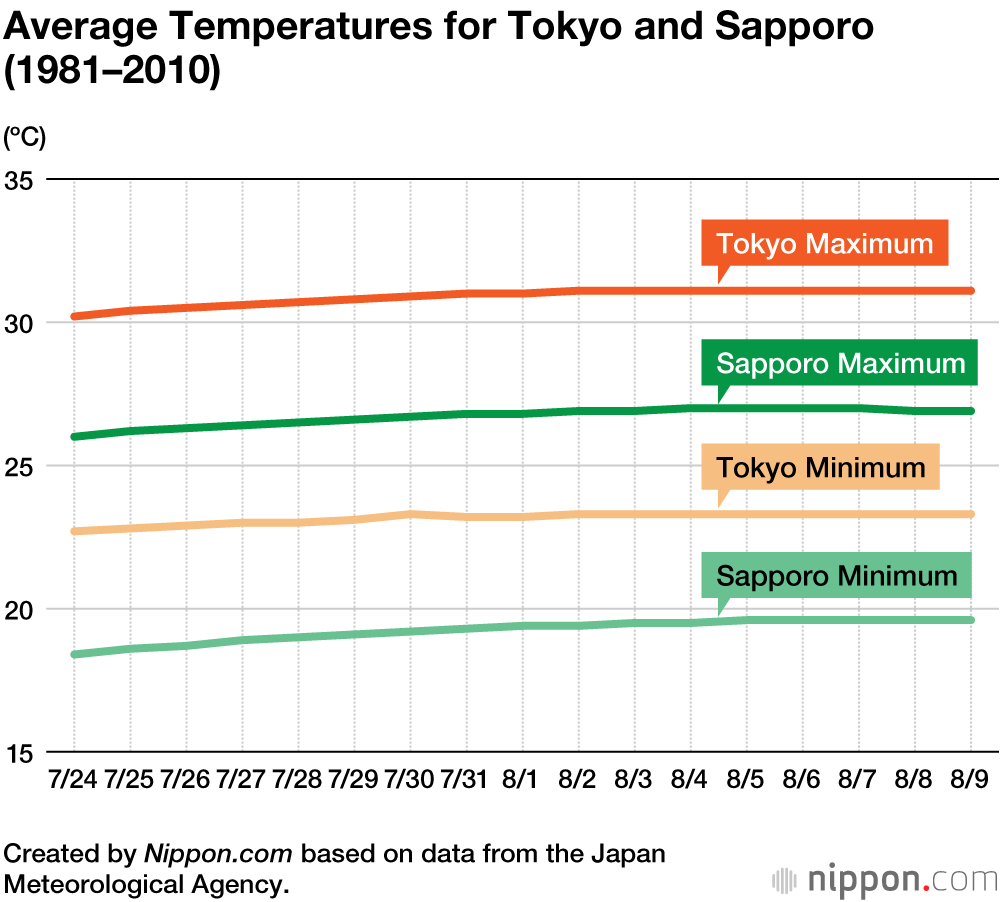