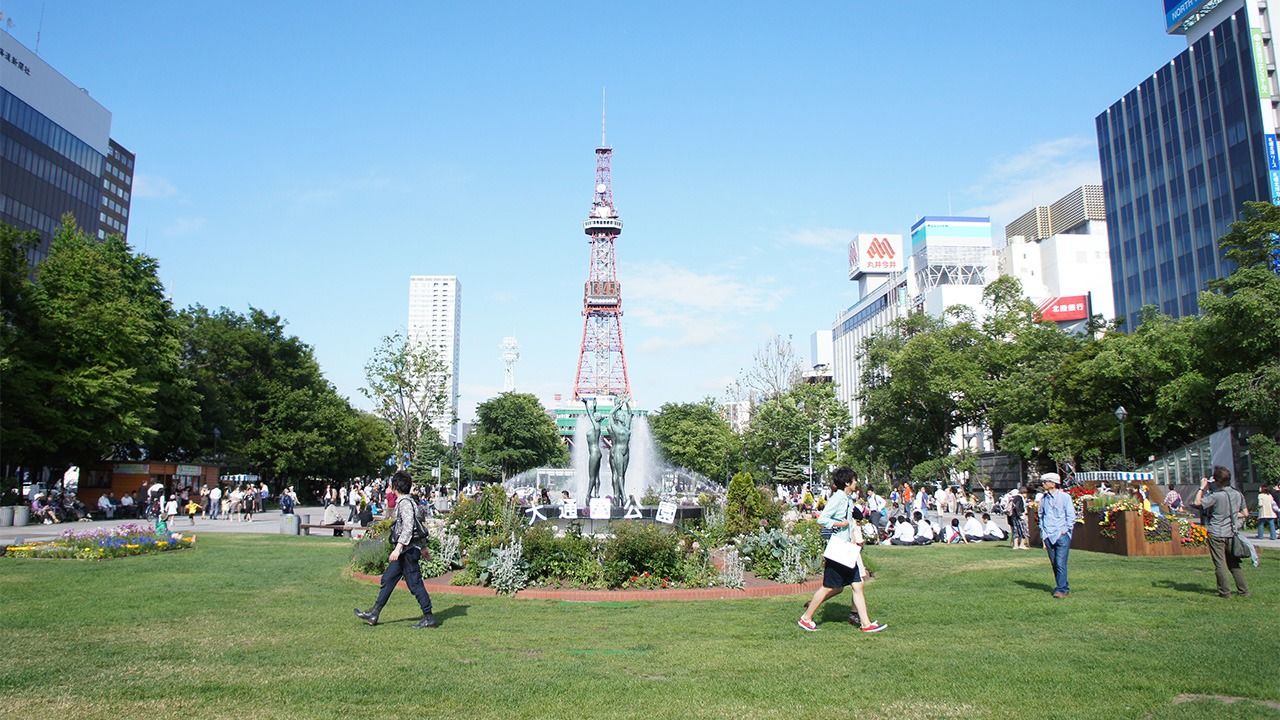 Tokyo 2020 Sports Nov 14, 2019
An overview of the route for the Hokkaidō Marathon, which may be repurposed for the 2020 Summer Olympics.

The 2020 Olympic marathon event has been relocated from Tokyo to Sapporo. Its route may be based on the Hokkaidō Marathon, which starts and finishes at Ōdōri Park in the center of Sapporo. It has grown from just 439 participants in 1987 to become one of Japan’s main marathons, and is the only race of the distance to be held in summer in the country. 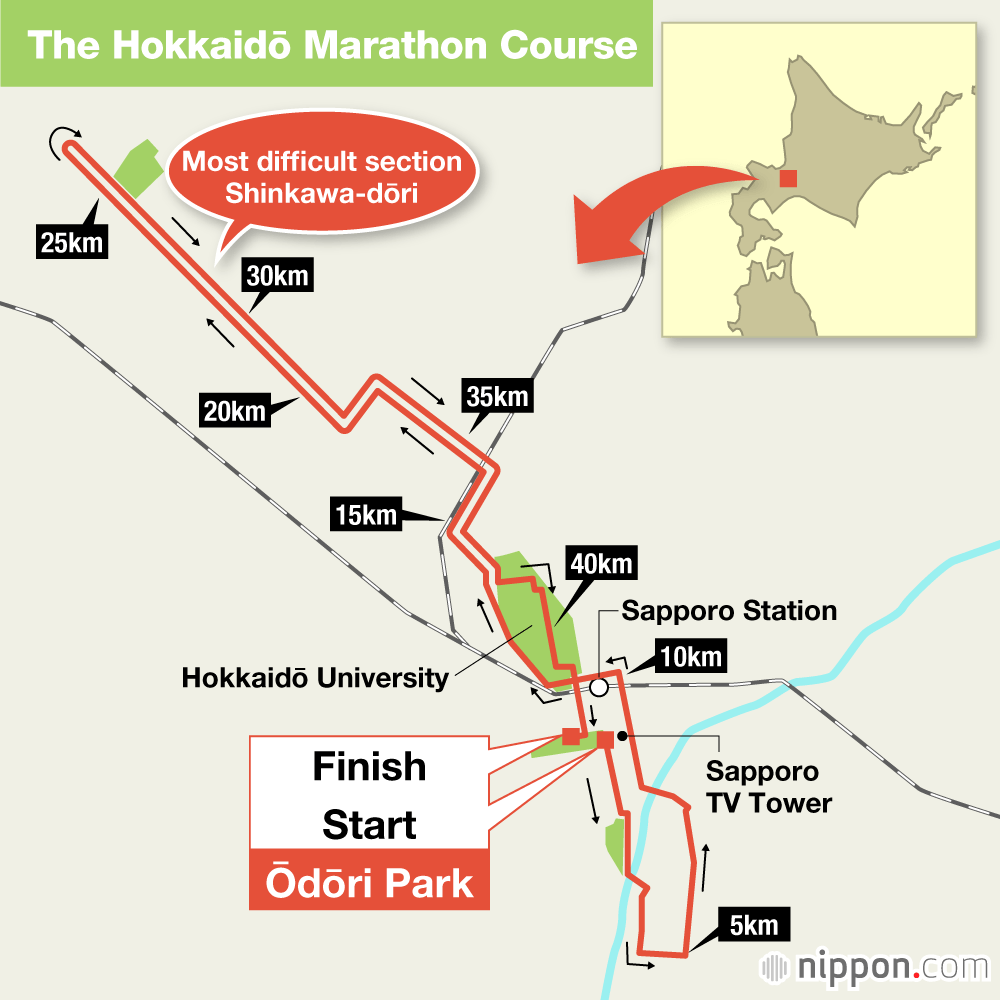 As a summer event it attracts Japan’s top runners seeking similar conditions to the Olympics and the World Athletics Championships. Barcelona Olympics silver medalist Arimori Yūko’s victory in the 1995 marathon secured her a place in the 1996 Atlanta Olympics. Athletes Maeda Honami and Suzuki Ayuko, who have qualified for the 2020 Olympics Women’s Marathon, won the Hokkaidō Marathon in 2017 and 2018, respectively.

The event starts in Ōdōri Park, which stretches 1.5 kilometers east to west across the center of Sapporo. The electronic clock on Sapporo TV Tower, the city’s landmark, is used for the countdown to start the race. 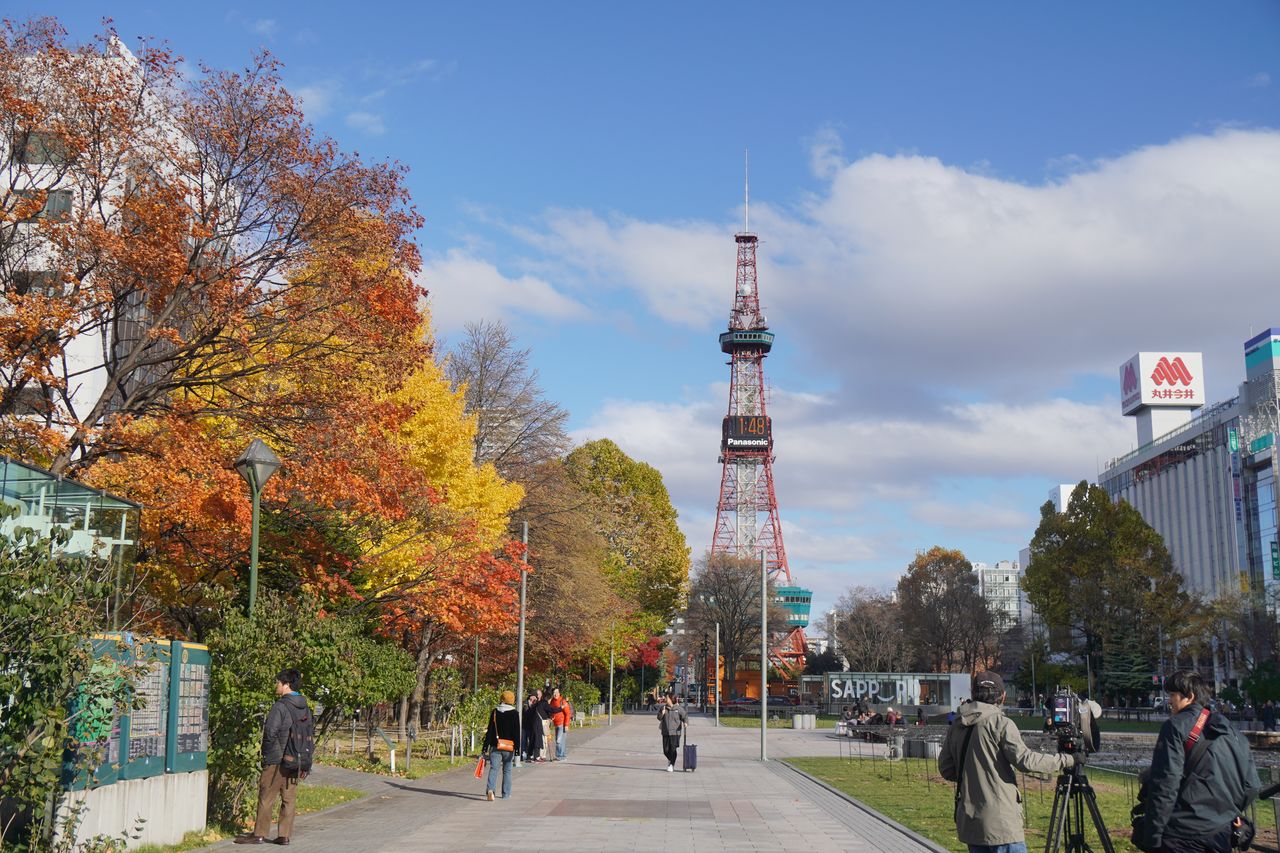 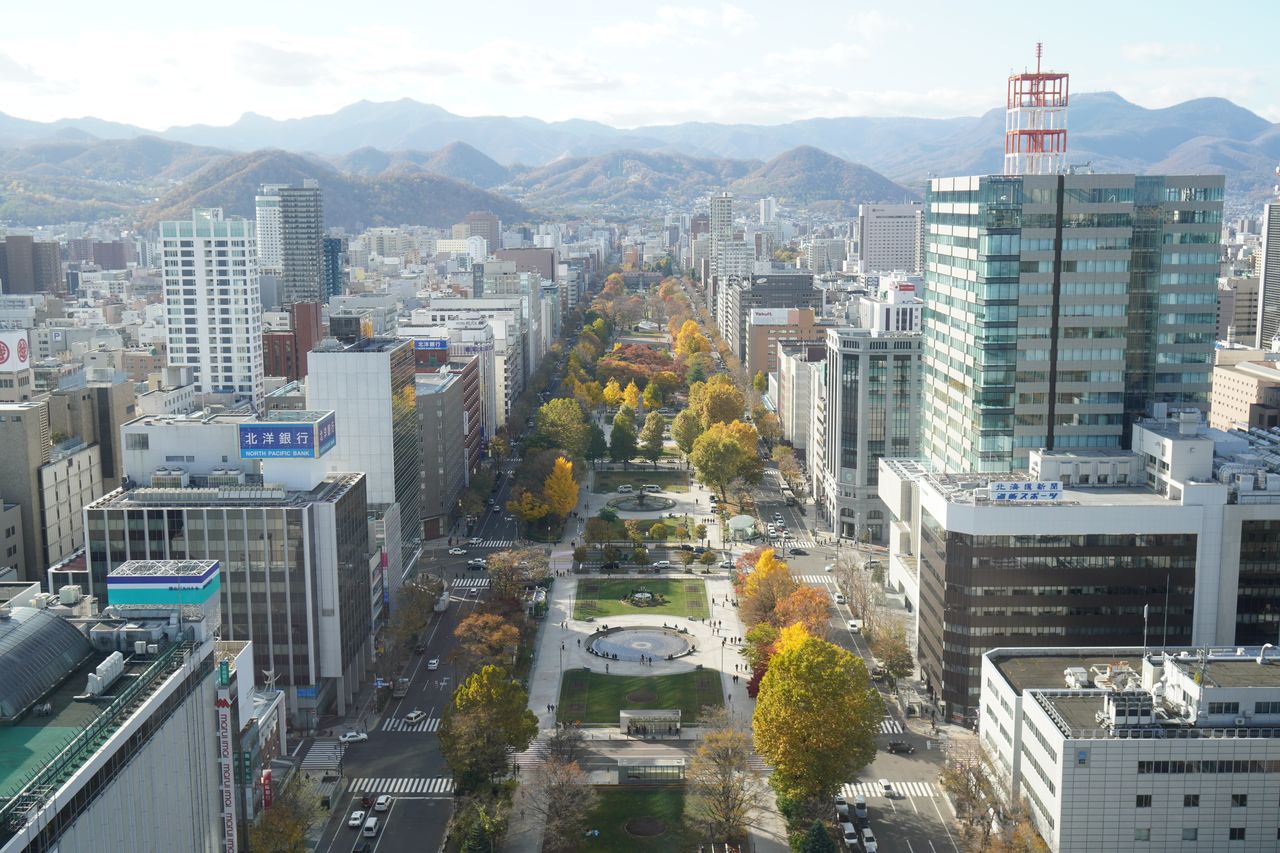 Ōdōri Park was first established in 1871 as a firebreak dividing the northern and southern parts of central Sapporo. It forms a pleasant green area in the city with open grassy areas, flowers, and around 4,700 trees, including 92 varieties of trees such as lilac and Japanese elm. Although famous as the venue for the Sapporo Snow Festival in Winter, for one month from late July, it also hosts the Sapporo Summer Festival. During that period, the park becomes a huge beer garden able to seat 13,000 people. Many local people and tourists come to enjoy booths selling regional food and beers from around the world, as well as make the most of the short Hokkaidō summer.

The Olympic marathon is currently scheduled to be held at the same time as the beer garden. Citizens are worried that due to the park being the finishing point for the race, the beer garden will be made smaller in scale or even canceled due to the need to save the space for the finishing point and security concerns. There have been calls on social media not to take away Sapporo summer fun. 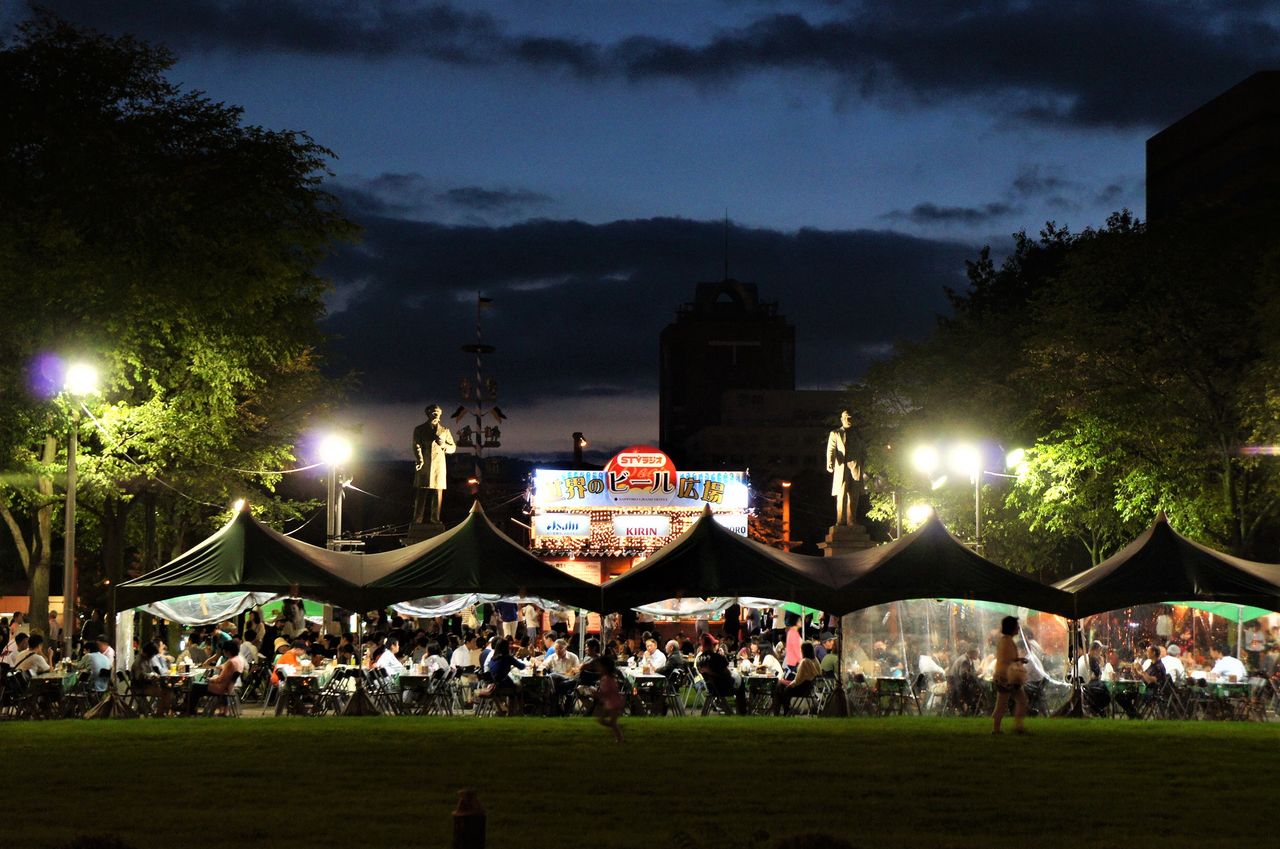 The course starts by heading south down through the city. It then passes through Susukino, Sapporo’s top shopping area, and on to Nakajima Park. Further on, runners crossing the Horohira Bridge can enjoy the vista of a slow-flowing river. 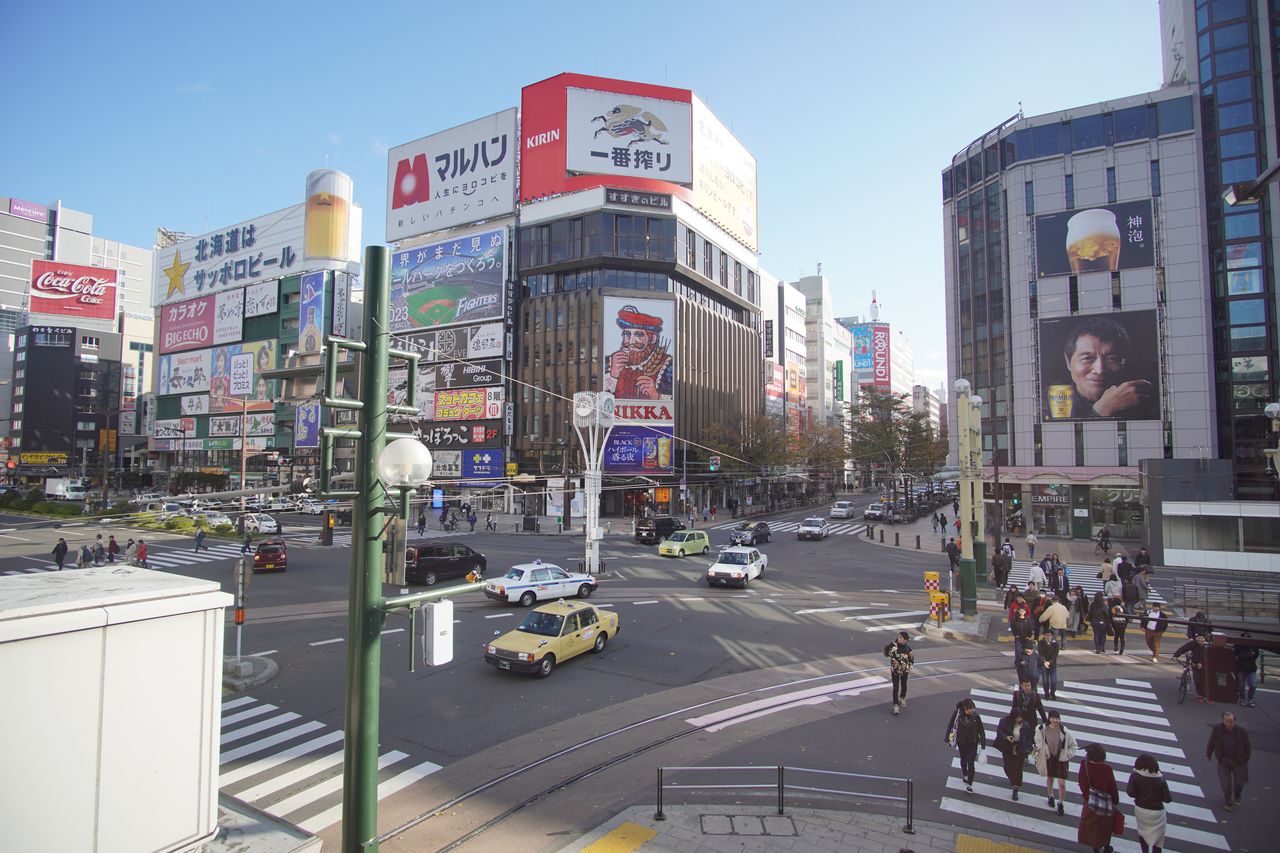 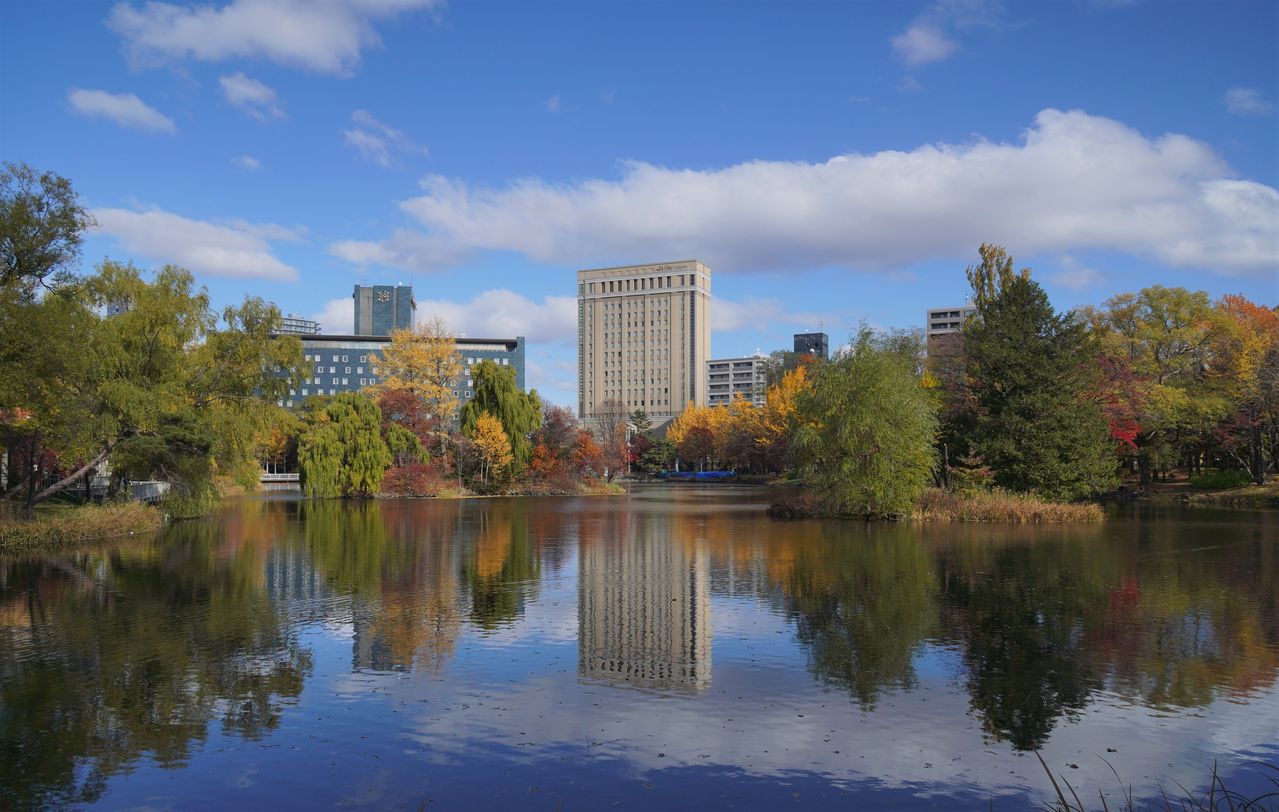 The waterways and rich greenery of Nakajima Park in central Sapporo. 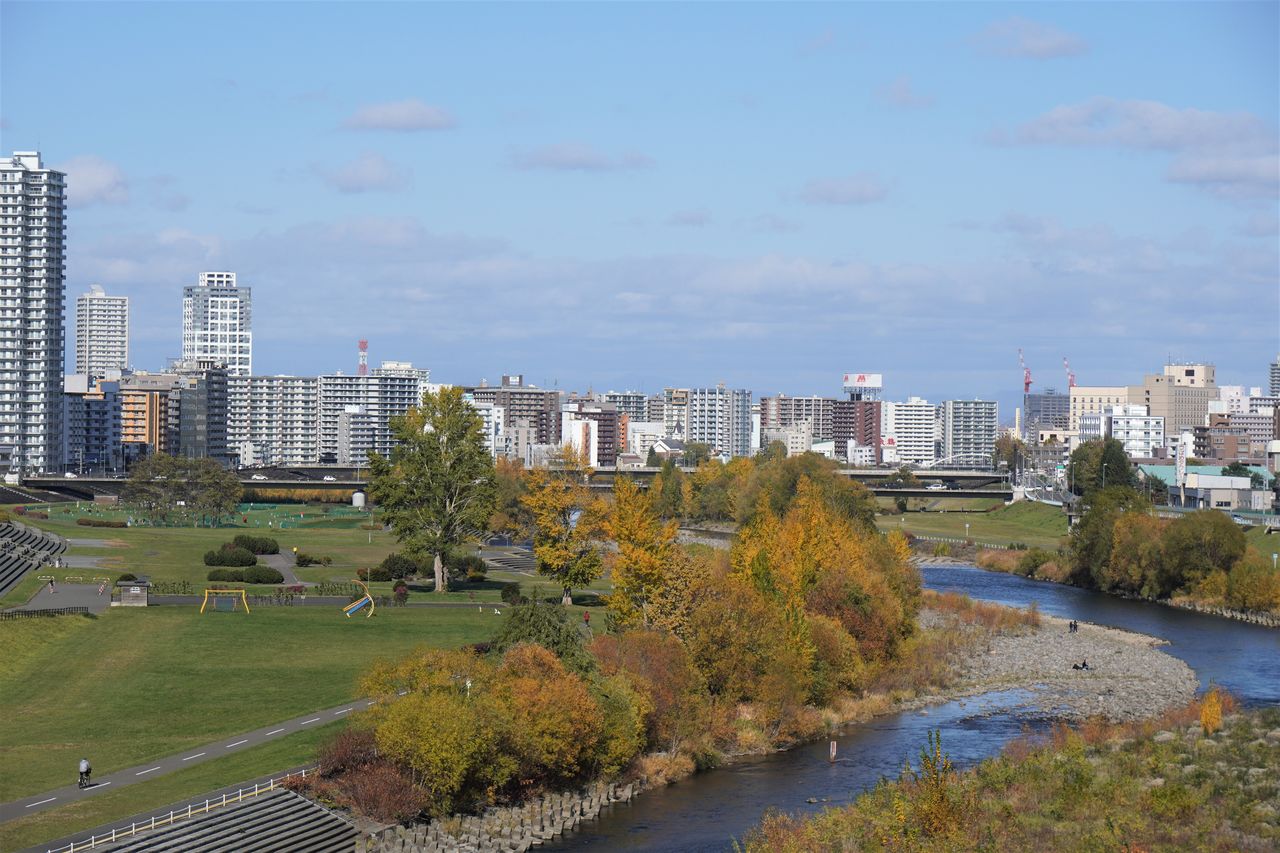 The center of Sapporo seen from across the gently flowing Toyohira River.

After leading south for about five kilometers, the course then heads back north into the city center. It passes the local landmark of Sapporo Clock Tower and carries on north of Sapporo Station. 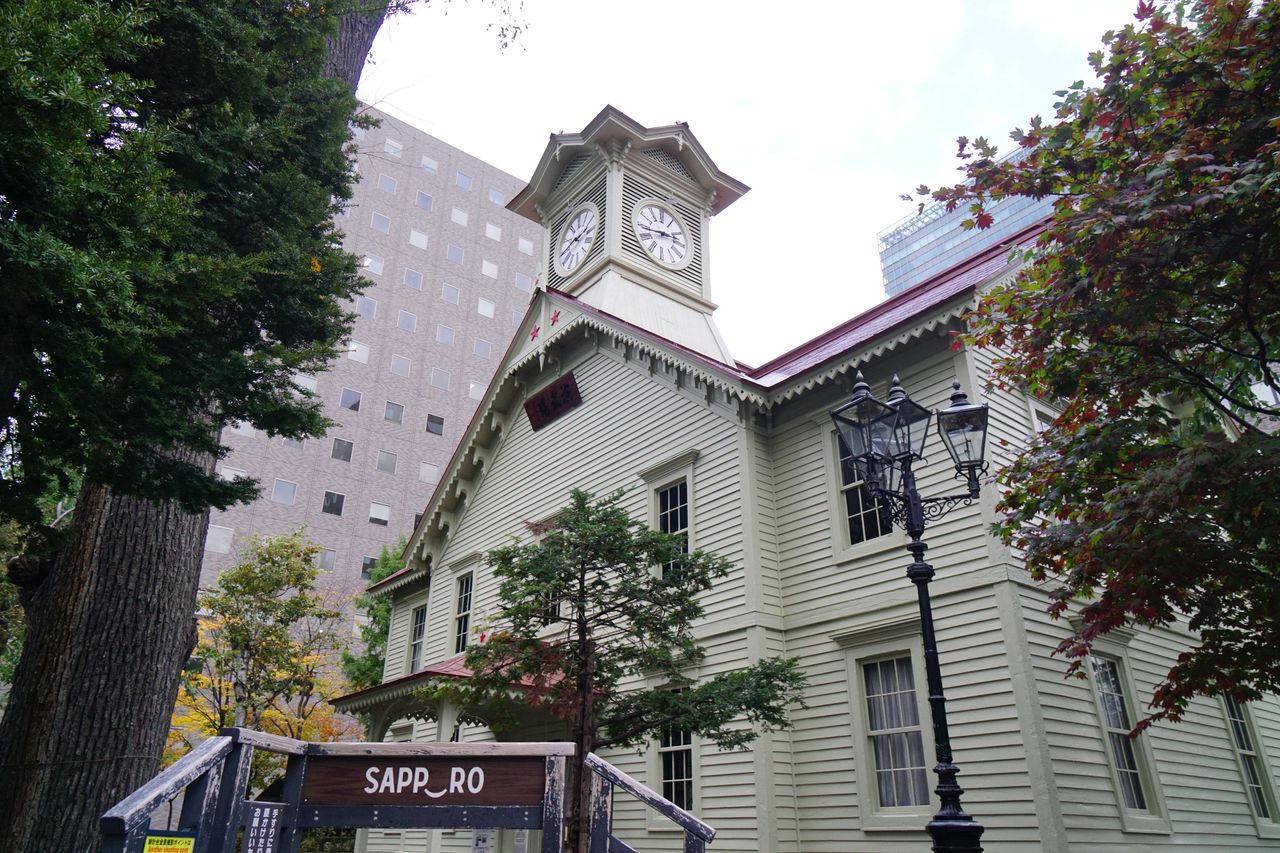 The clock tower in Sapporo, a must-visit spot for tourists.

The 10-kilometer section up to here is the only part of the course with an incline, while the following 30 kilometers of route stretches out almost flat.

Lying in wait after Hokkaidō University though is the Shinkawa-dōri section. This out-and-back section of 13 kilometers that includes the turnaround point is known as the most mentally challenging part of the marathon.

It is a very typical stretch of road for Hokkaidō with three lanes on each side of a straight road and very few high buildings or trees to provide shade, so on a fine day, runners find themselves toiling under the hot sun.

A highway can be seen running left to right across the center of the photo below taken from Sapporo JR Tower above Sapporo Station. Looking towards Shinkawa-dōri, one can see that the area before the highway has many roadside trees and buildings of different sizes, giving a sense of a bustling city. However, on the other side of the highway, trees and buildings start to dwindle as the river flows toward the sea.

A local runner who previously participated in the marathon said that this section was a lot more difficult than expected because the scenery does not change. If he had not had friends supporting him, he believed he would have lost his confidence. There are actually many runners who retire at this section. 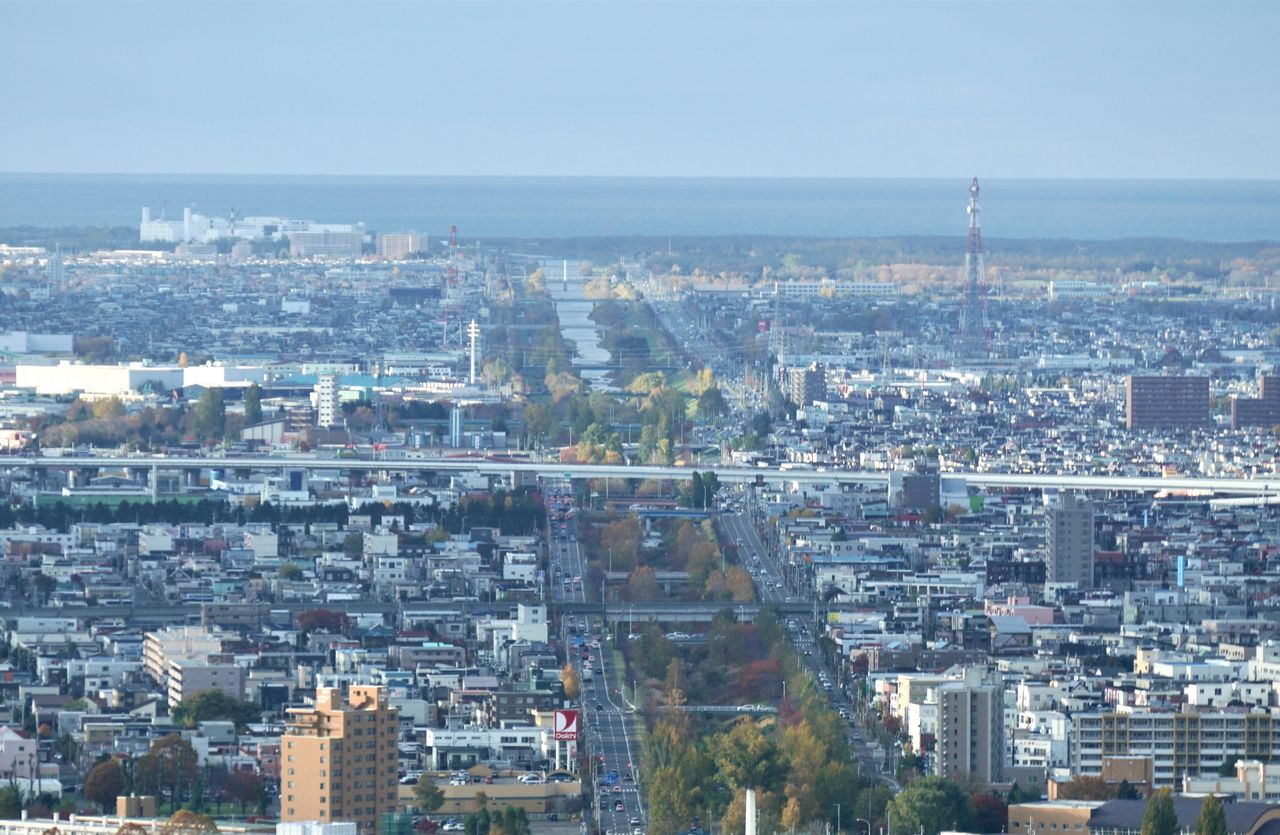 With few trees downstream on the Shinkawa river, no high buildings, and monotonous scenery, this section is a trial for runners.

Once the difficult stretch of Shinkawa-dōri is over, the course heads into Hokkaidō University. This lush campus is a pleasure to the eyes and has plenty of shade, so runners can recover their spirit to take on the final stage. Once they have passed through the university, the center of the city is right in front of them. The marathon finishes back at the starting point in Ōdōri Park. 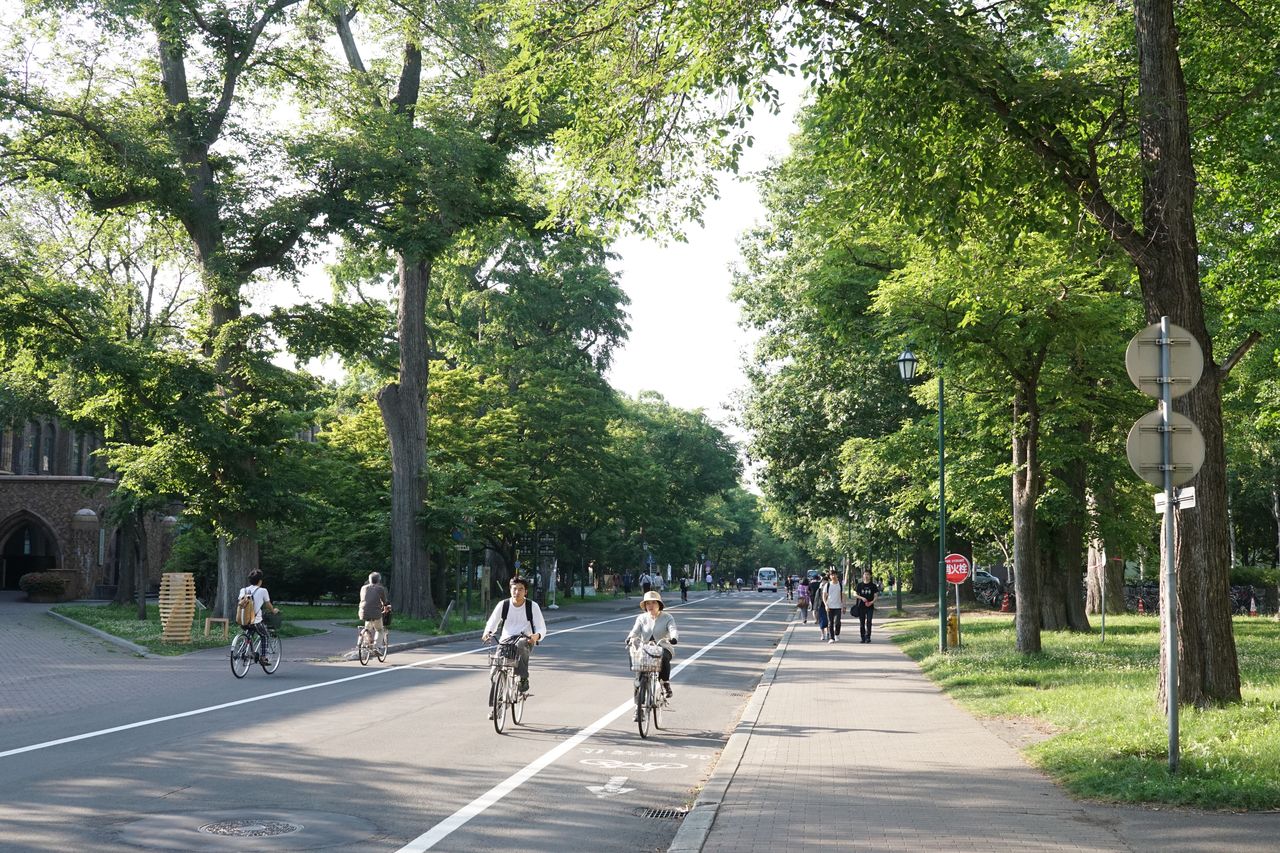 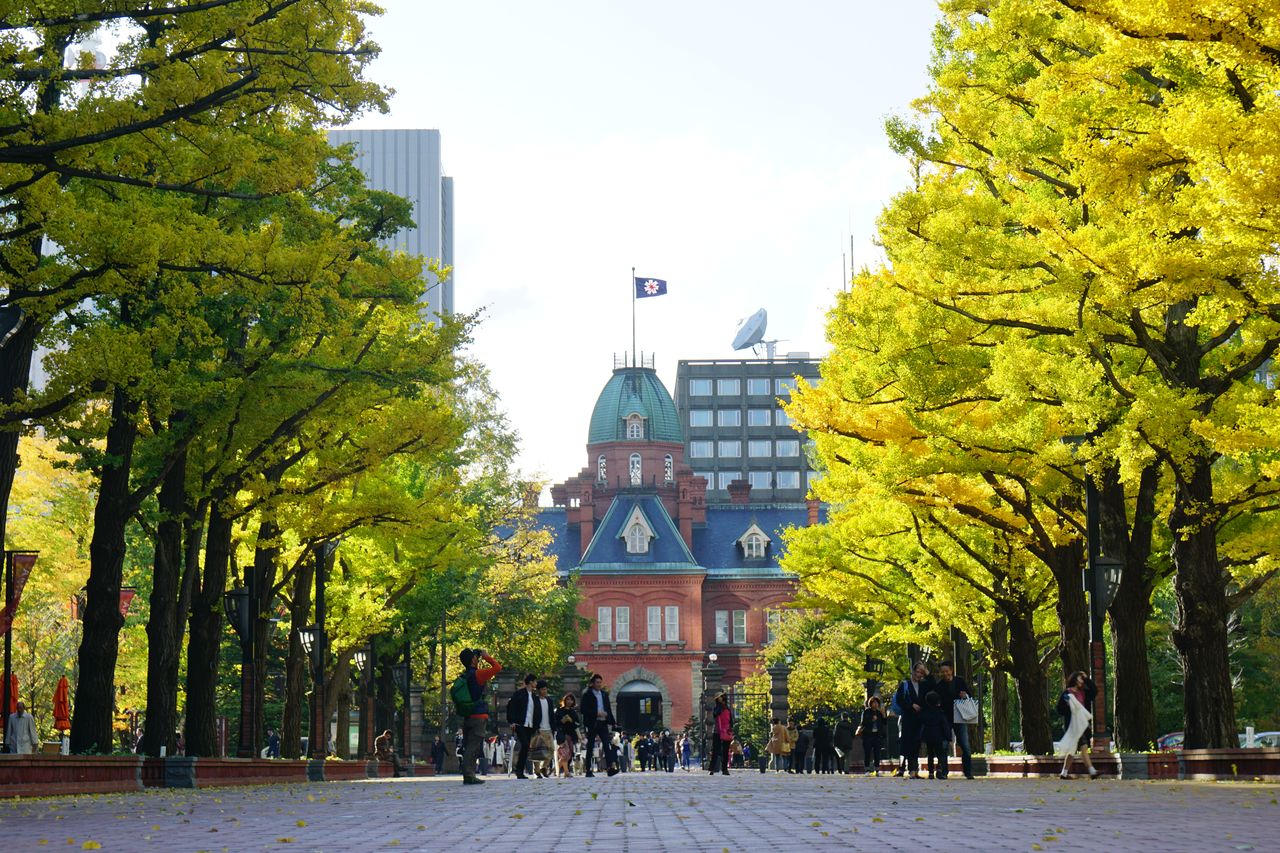 Initially, there was talk that the Olympic marathon would start at Sapporo Dome, where there is seating. The dome is used as the home ground for the professional baseball team Hokkaidō Nippon Ham Fighters and J. League soccer team Consadole Sapporo; however, there is no track for athletics. Due to the huge costs to install a track and because the 1-kilometer approach to the dome has a steep 30-meter elevation, this idea has now been shelved. 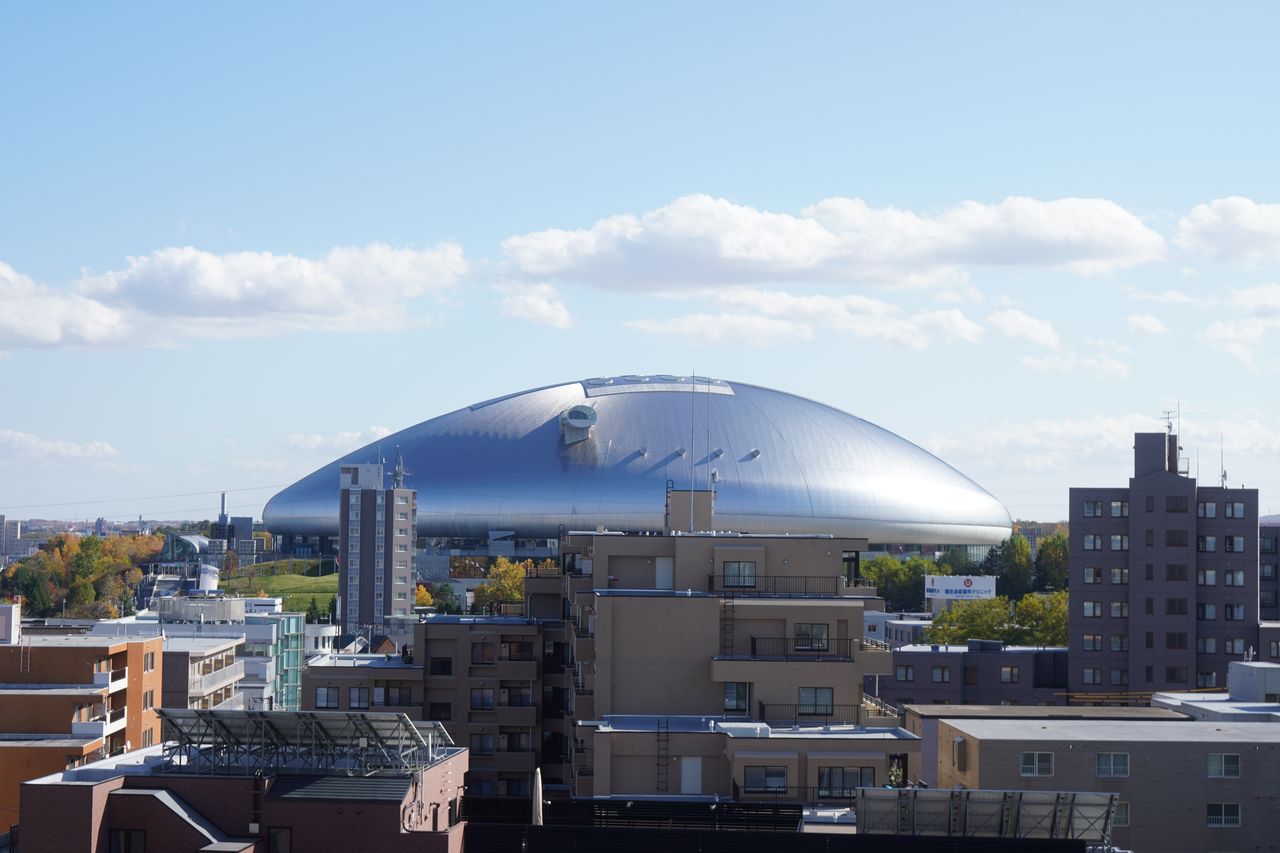 Sapporo Dome, the home stadium for Nippon Ham and Consadole Sapporo. It resembles a UFO that has made an emergency landing in a residential area.