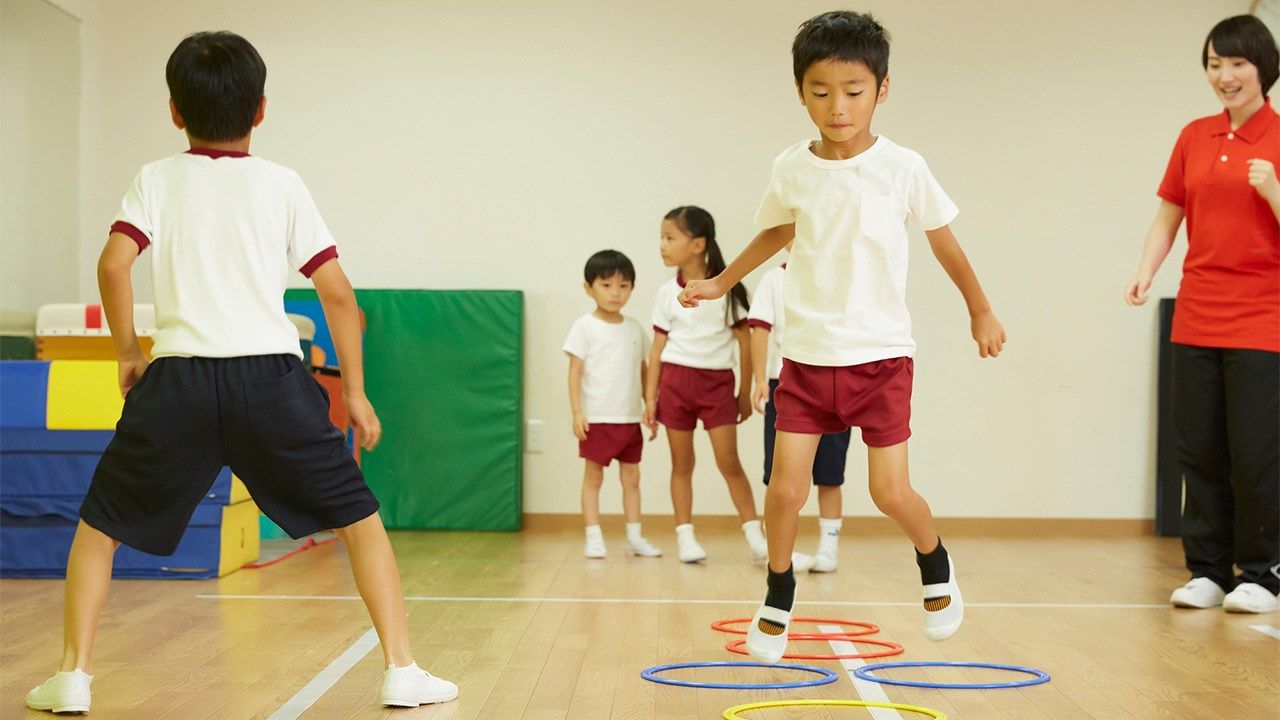 Society Feb 18, 2020
A survey conducted by the Japan Sports Agency has revealed a decline in physical fitness among the nation’s children.

A fiscal 2019 study by the Japan Sports Agency on nationwide physical fitness, athletic ability, and exercise habits found a decline among both elementary school and junior high school children for their total physical fitness score, which is the average of the totals for the various physical activities measured under the study. The decrease was particularly noticeable among elementary school boys, whose total fitness score was the lowest on record since the study was first conducted in fiscal 2008.

The study was conducted from April to July 2019, involving 2 million students, or the majority of fifth-year elementary school students and second-year junior high school students in Japan. The physical tests included the eight categories: grip strength, sit-ups, forward stretching, side stepping, 20-meter shuttle run (junior-high students can choose endurance run instead), 50-meter dash, standing long jump, and softball throw (junior-high students throw a handball). The results were tallied for all of the categories, with a perfect total score being 80 points.

The results of the total physical fitness scores show that fifth-year elementary school boys averaged 53.6 points, down from 54.2 points in fiscal 2018; while the average for fifth-year girls was 55.6 points, down from 55.9 points the previous year. Meanwhile, second-year junior high school students averaged 41.6 points among boys, down from 42.2 in fiscal 2018, and second-year girls scored 50.0 on average, which was lower than the 50.4 points last year. 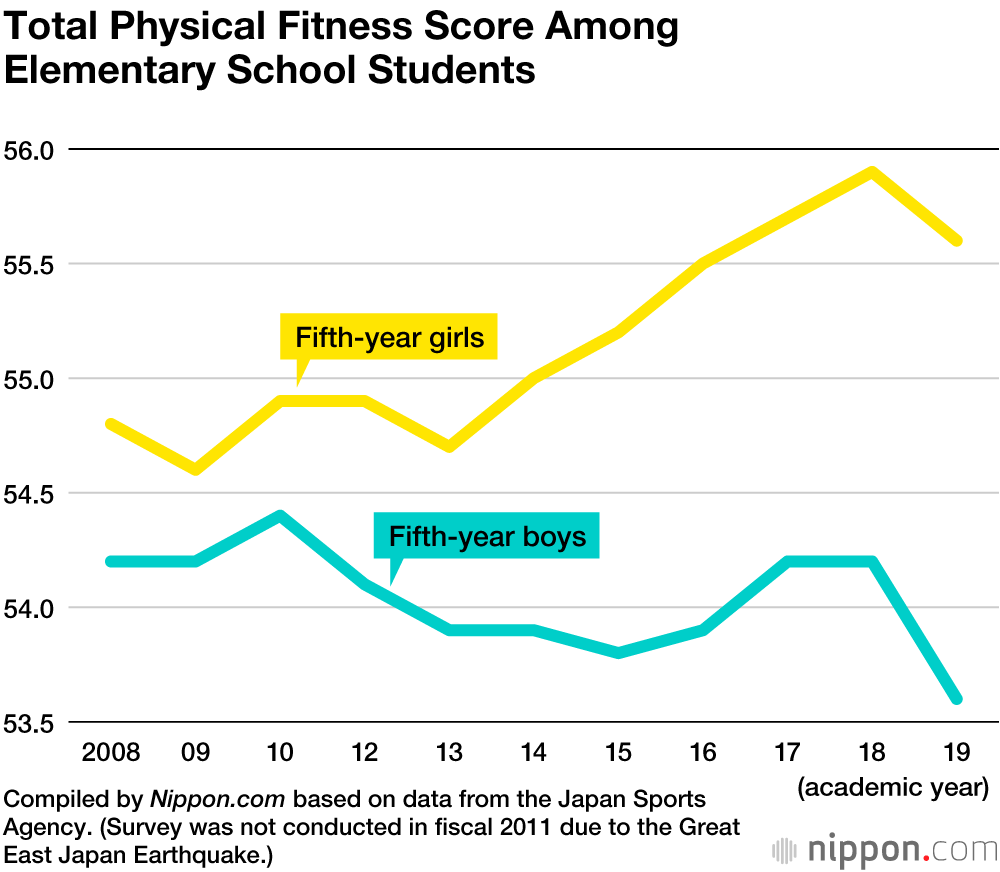 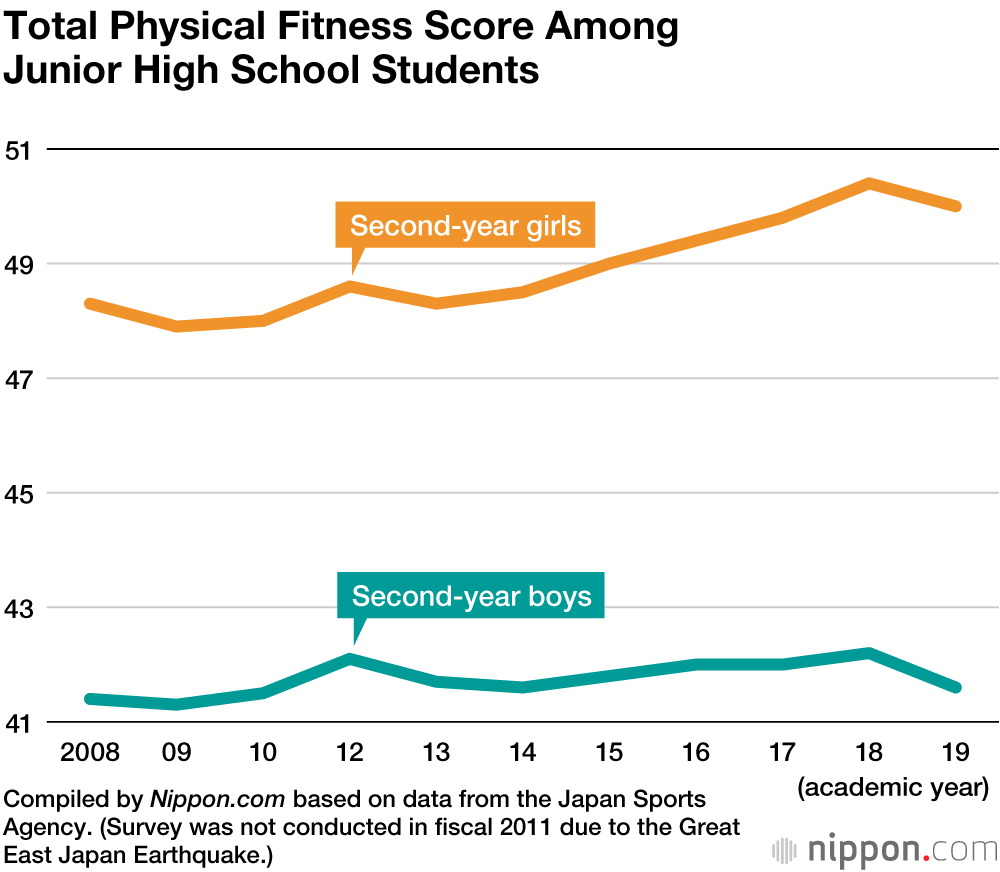 Some of the reasons cited by the Japan Sports Agency for the decline in physical fitness include a decrease in time spent exercising, rising obesity among children, an increase in students skipping breakfast, and the rise in “screen time” among students playing video games or using their smartphones.

Compiled by Nippon.com based on the fiscal 2019 survey by Japan Sports Agency.

The obesity rate among children in fiscal 2019 was as follows: 11.1% for fifth-year elementary school boys, 8.1% for fifth-year girls, 8.6% for second-year junior high school boys, and 6.6% for second-year girls. All of the rates were around 0.3 to 0.7 percentage points higher than the previous fiscal year. Children who have problems with obesity tended to have lower total physical fitness scores.