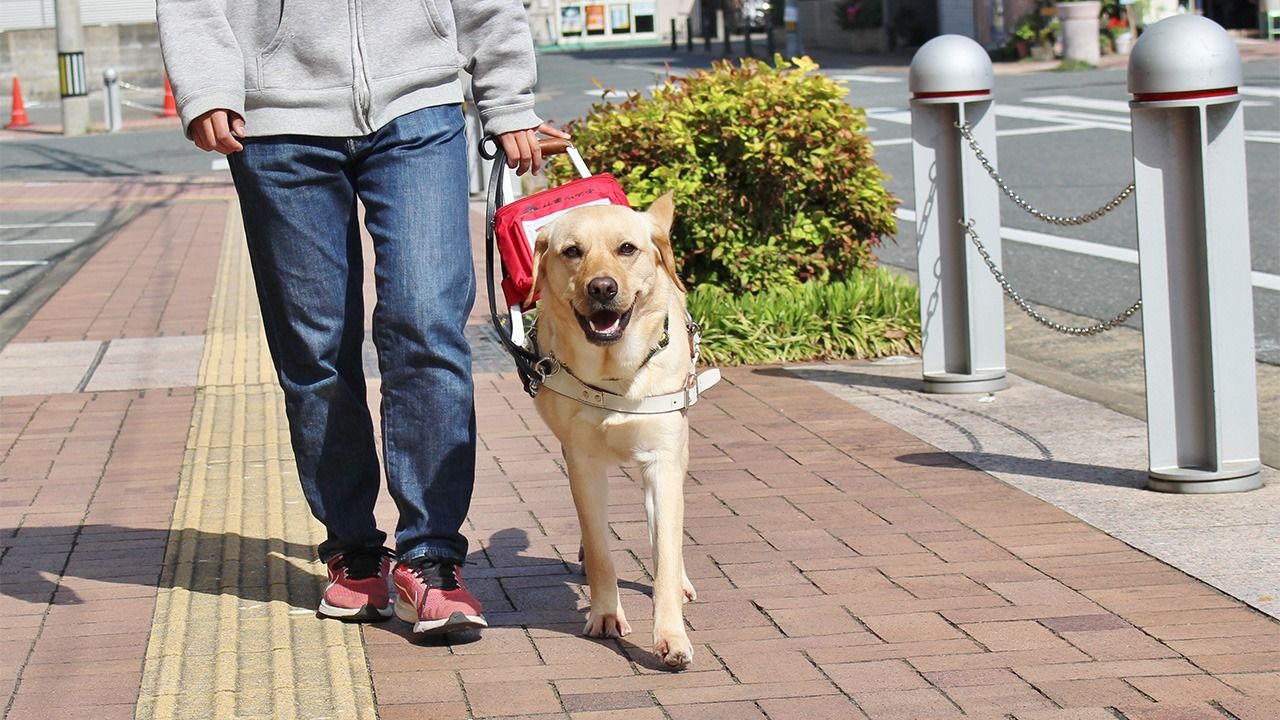 Society Lifestyle Culture History Tokyo 2020 Jun 12, 2020
Many visually impaired people accompanied by guide dogs in Japan have experienced being denied entry to various facilities despite the legal requirement to allow them in.

A survey conducted by the National Federation of All Japan Guide Dog Training Institutions found that roughly half of visually impaired people have experienced being denied access to stores, hospitals, and other facilities because they were accompanied by a guide dog. These results reflect the lack of understanding that persists in Japan despite the legal requirement to allow entry to guide dogs.

The survey was conducted over the course of a year, starting in January 2019, asking all of the users of eight training institutions. Survey questions included whether visually impaired people accompanied by guide dogs during that period of time had been denied entry to various  facilities. Questions were posed to a total of 643 people in the first nationwide survey of its kind.

Among those surveyed, 336 (52%) had the experience of being denied entry when accompanied by a guide dog, with more than 70% of these facing this issue on multiple occasions. The establishments that most commonly excluded guide dogs were bars and restaurants, cited by 77% of the surveyed persons who experienced being denied entry; followed by hospitals, at 25%; and trains, buses, taxis, and other means of transportation, at 21%. 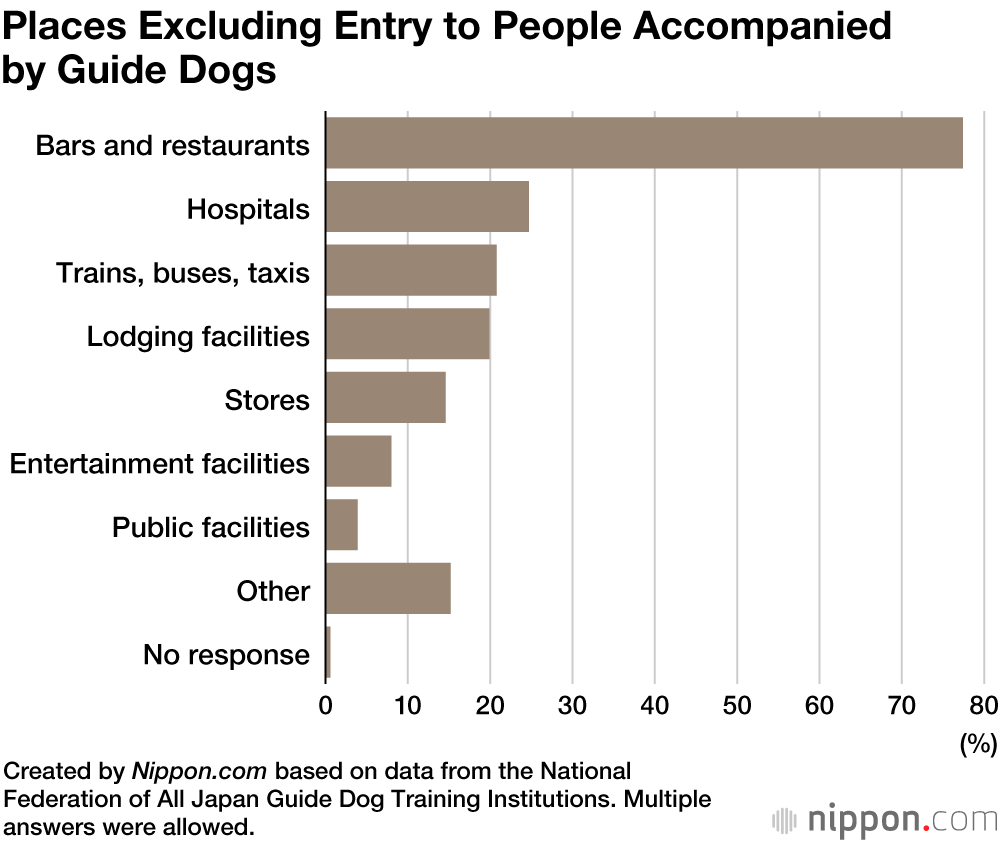 The most common reason given for denying access was that “dogs are not allowed,” mentioned in 62% of the cases, followed by “the inconvenience it would cause to customers with an allergy to or strong dislike of dogs,” at 46%, and “the lack of a precedent to allow dogs inside,” at 34%. 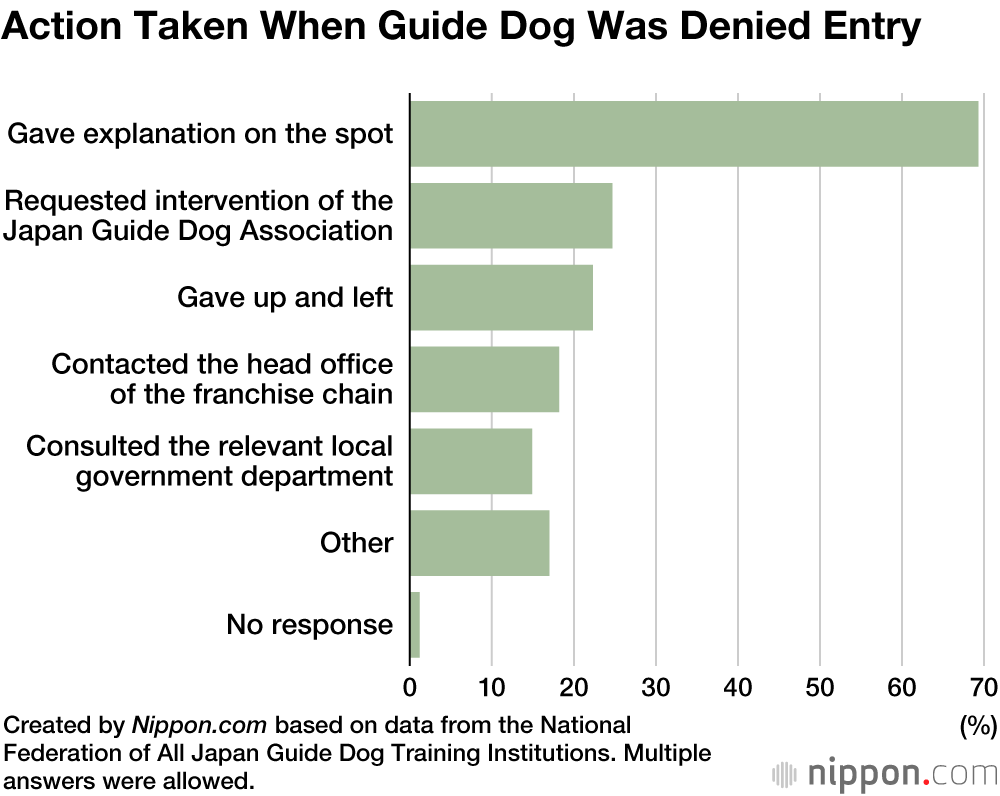 Under the Act for Eliminating Discrimination Against Persons with Disabilities, enacted in April 2016, people accompanied by guide dogs have the legal right to enter a restaurant, hospital, gym, or other facility, and also ride buses, taxis, and other forms of transportation. At the same time, it is required that the dogs be well maintained, so that they remain quiet inside the facility, receive regular vaccinations, and are kept clean. Despite this law being in place, denial of entry continues.

An official at the federation noted the following: “Persons from overseas accompanied by guide dogs are expected to visit Japan for the Tokyo Olympics and Paralympics. This will be a test of the stance of Japan toward the physically disabled as one of the ratifying countries of the Convention on the Rights of Persons with Disabilities.”