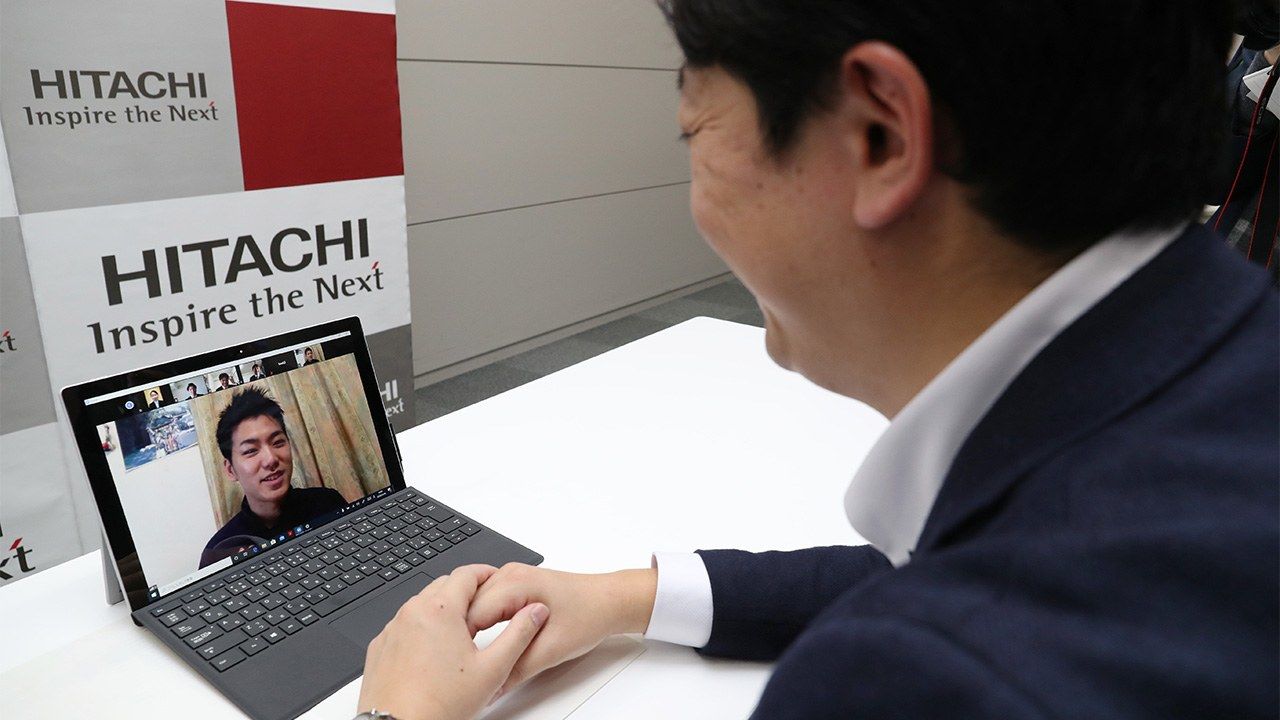 Economy Society Jun 2, 2020
The COVID-19 pandemic has affected job-seeking activities in Japan, with fewer students than usual having secured jobs.

Among Japanese university students set to graduate in the spring of 2021, only 45.7% have secured job offers as of May 1, according to a study conducted by Recruit Career, a supplier of information to job seekers. This is a 5.7 percentage point decrease compared to the same period the previous year. The primary cause seems to be the paralysis of hiring activities amid COVID-19 pandemic.

According to Recruit Career, this is the first time for a year-on-year monthly decline in job offers since the current hiring schedule for university students was implemented, beginning with the class of 2017. 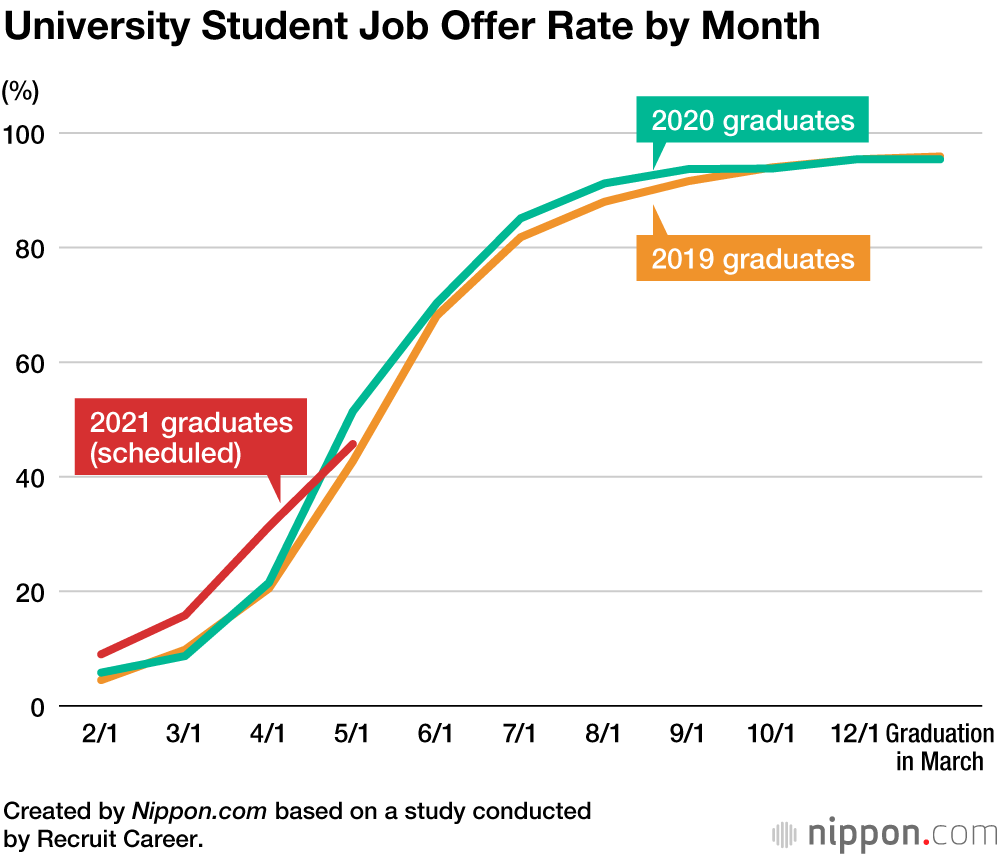 The study was based on responses from 1,080 monitored students. The students were asked about their job-hunting activities in April. The results found that 35.2% had undergone some sort of face-to-face screening like an interview, down 34.9 points compared to the figures for the same month of the previous year. In contrast, 56.9% had undergone some sort of online interview, an increase of 49.3 points compared to April 2019. Participation in other sorts of face-to-face meetings, such as company briefings and seminars, was down 24.5 points to 10.6%. 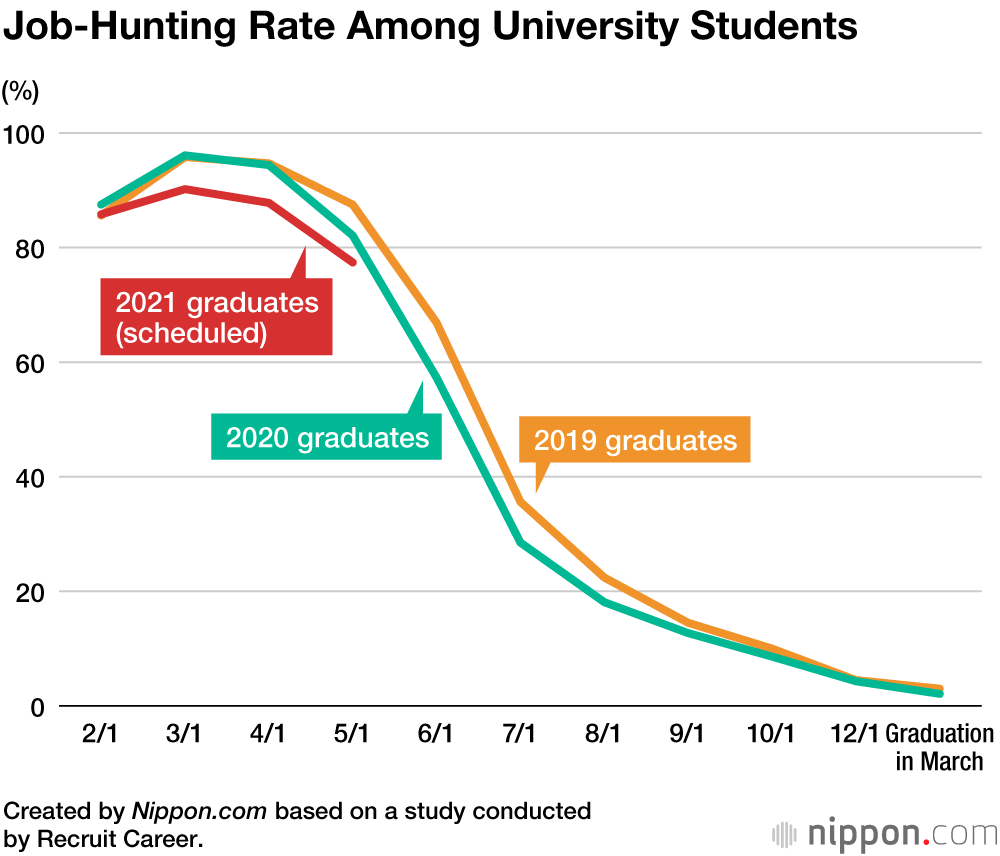 The job offer rate as of April 1 had been a record high 31.1%, but after the government declared a state of emergency on April 7, it did not rise significantly, as more and more companies placed their hiring activities on hold. According to Recruit Career, the recruitment activities of companies have stalled. Human resources managers at companies have pointed to the difficulty in making tentative job offers solely on the basis of online interviews.

The latest study, published on May 15, points to a slight increase in the job-offer rate, to 49.2%, but this is lower than in the previous year. The job-hunting rate as of the same date was 75.6%.

(Translated from Japanese. Banner photo: A human resources manager at Hitachi in Chiyoda, Tokyo, talking to a job-seeking student through video chat on March 6, 2020. © Jiji.)