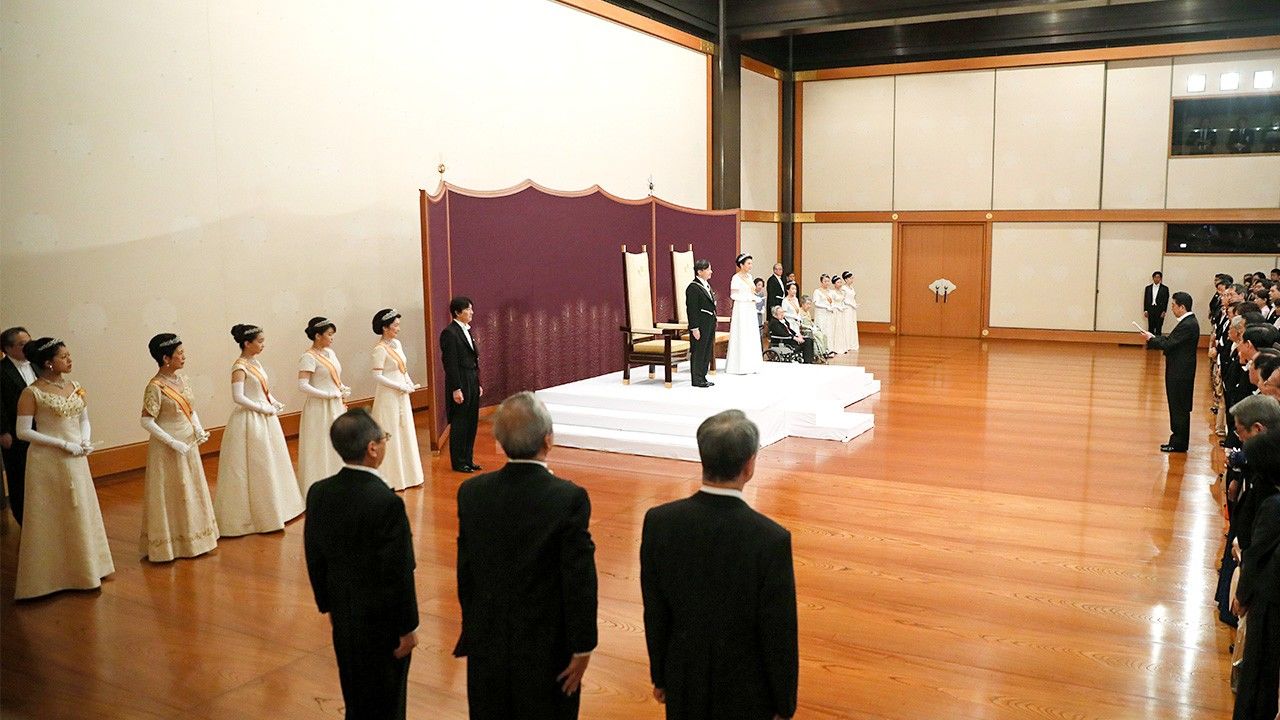 Politics Society Culture History Jun 30, 2020
Under Japan’s Imperial House Law, only a man can become emperor, but historically this was not the case. There have in fact been eight female Japanese emperors to date.

Japan’s Imperial House Law states that only “a male offspring in the male line belonging to the Imperial Lineage” may become emperor. In 2004, following four decades with no male births in the imperial family, a growing sense of crisis prompted Prime Minister Koizumi Jun’ichirō to establish a study group on the Imperial House Law and questions of succession. The group’s report, issued the following year, recommended allowing female members of the family and matrilineal descendants of them to take the Chrysanthemum Throne; but before legislators could act on this, the 2006 announcement that Princess Kiko was pregnant, followed by the September birth that year of Prince Hisahito, the group’s recommendations were set aside.

Eleven years later, though, the sense of crisis is growing again. Special legislation enacted in 2017 to allow for the abdication of Emperor Akihito included a supplementary resolution calling on the government to discuss how to ensure stable future succession. Just three men are currently eligible to succeed to Emperor Naruhito: his younger brother Fumihito, his nephew Hisahito, now 13, and his elderly uncle Masahito.

Under the present system, if Hisahito becomes emperor and does not have a son, there will be no possible heir to the throne. As such, the government was due to start discussions on the succession issue after the ceremonial investiture of Crown Prince Fumihito on April 19. However, the COVID-19 pandemic forced a delay to the ceremony, leaving the question of succession up in the air.

Historically there was no absolute requirement for emperors to be male and in the male imperial line. Eight women have ascended to the imperial throne of Japan; as two did so on two occasions under different imperial names, they appear 10 times in the official list of 126 emperors. Although the full list includes a number of legendary leaders, all of the female rulers are from the historically verifiable period. All of them are also descendants of emperors through the male line.

The Japanese word tennō for the imperial leader or “emperor” is now applied retrospectively for all those who have ascended the throne, even though it was not always used historically. Unlike the English “emperor,” it is used with both male and female leaders. When talking about the position in general, we have used the word “emperor,” but individuals appear under the title of “Empress,” by which they are better known.

The daughter of Emperor Kinmei, she ascended to the throne after the assassination of her predecessor, Emperor Sushun, by a member of the powerful Soga clan. With no immediate agreement on who would succeed, the selection of Suiko, whose mother was also in the Soga clan, was seen as bringing political stability. She oversaw an age in which Buddhism flourished and the temple Hōryūji was built in Nara. Japan also began diplomatic missions to China during her reign.

When there was no agreement on succession after the death of her husband, Emperor Jomei, with Soga wishes again a factor, the great-granddaughter of Emperor Bidatsu ascended to the throne under the name of Kōgyoku. She abdicated after a few years and her younger brother became Emperor Kōtoku. However, when he died and there was again no clear candidate to succeed, she ruled again under the name of Saimei.

The daughter of Emperor Tenji and the wife of her predecessor, Emperor Tenmu, she ascended to the throne as her son Prince Kusakabe had a strong rival to the succession at that time. Kusakabe died shortly after, so Jitō ruled until her grandson was old enough to succeed her as Emperor Monmu.

A younger half-sister of Empress Jitō and daughter of Emperor Tenji, she was also the wife of Prince Kusakabe and mother of Emperor Monmu. She ascended to the throne as her grandson (later Emperor Shōmu) was too young to succeed at the time of Monmu’s death.

The only woman to follow a woman in the imperial succession, she was the daughter of Empress Genmei. As her father was Prince Kusakabe, the son of Emperor Tenmu, she was also in the male imperial line. She ascended the throne when Genmei abdicated after nine years and the future Emperor Shōmu was still seen as too young to succeed.

The daughter of Emperor Shōmu, she became the first woman to be officially designated as the first in line to the throne when his son died an early death. She ascended to the throne under the name Kōken but later abdicated, with her cousin becoming Emperor Junnin. During his reign, a power struggle intensified between him and the retired Kōken, backed by the Buddhist monk Dōkyō, who became a powerful favorite of hers. When Junnin’s supporter Fujiwara Nakamaro attempted to raise a rebellion to win back authority, her forces were victorious. She dethroned Junnin and took the throne again to rule for six more years as Shōtoku.

She succeeded her father, Emperor Go-Mizunoo, who had no sons at the time he abdicated following a dispute between the Tokugawa shogunate and the imperial court. However, he had a son after his abdication, and she later gave up the throne herself when the boy was old enough to become Emperor Go-Kōmyō.

The daughter of Emperor Sakuramachi, she ascended the throne after the death of Emperor Momozono as his designated successor was still too young to become emperor. She later abdicated and the boy became Emperor Go-Momozono.

(Originally published in Japanese. Banner photo: An imperial succession ceremony for Emperor Naruhito on May 1, 2019, attended by many female imperial family members. © Jiji.)