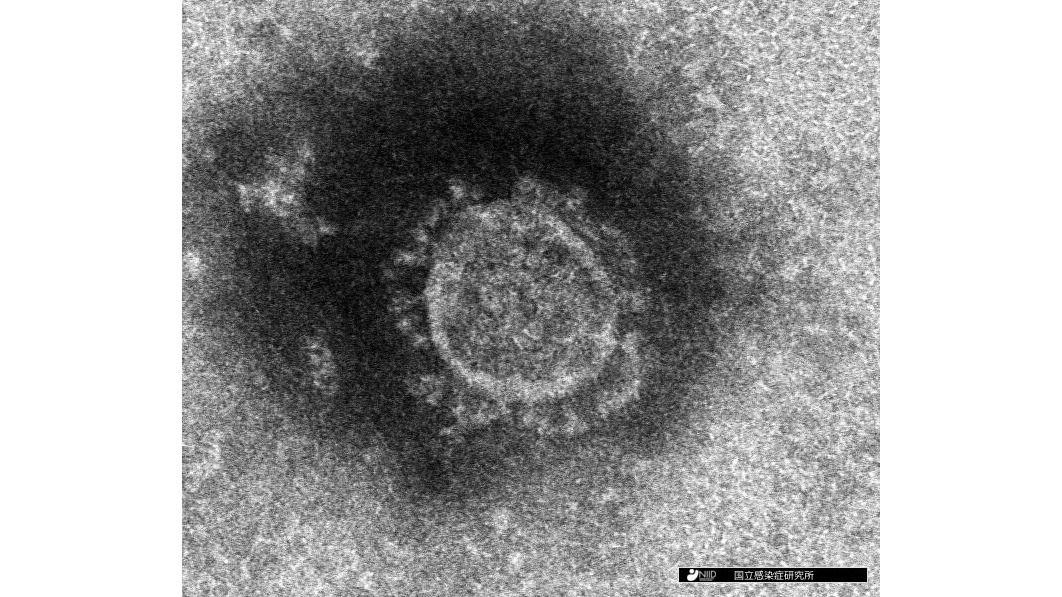 The supplementary budget including ¥100,000 payments to all residents is enacted in the Diet. It amounts to ¥25.7 trillion, of which ¥12.9 trillion is earmarked for the payments. This brings Japanese government bond issuance to a record ¥58.2 trillion in fiscal 2020, lifting the bond dependency ratio to 45.5%.

Prime Minister Abe suggests the state of emergency will be extended beyond May 6, saying that as the number of infections continue to rise, it is difficult to say that the outbreak is over. He later says that he is considering a proposal to shift the start of the school year from April to September, as one among many options. 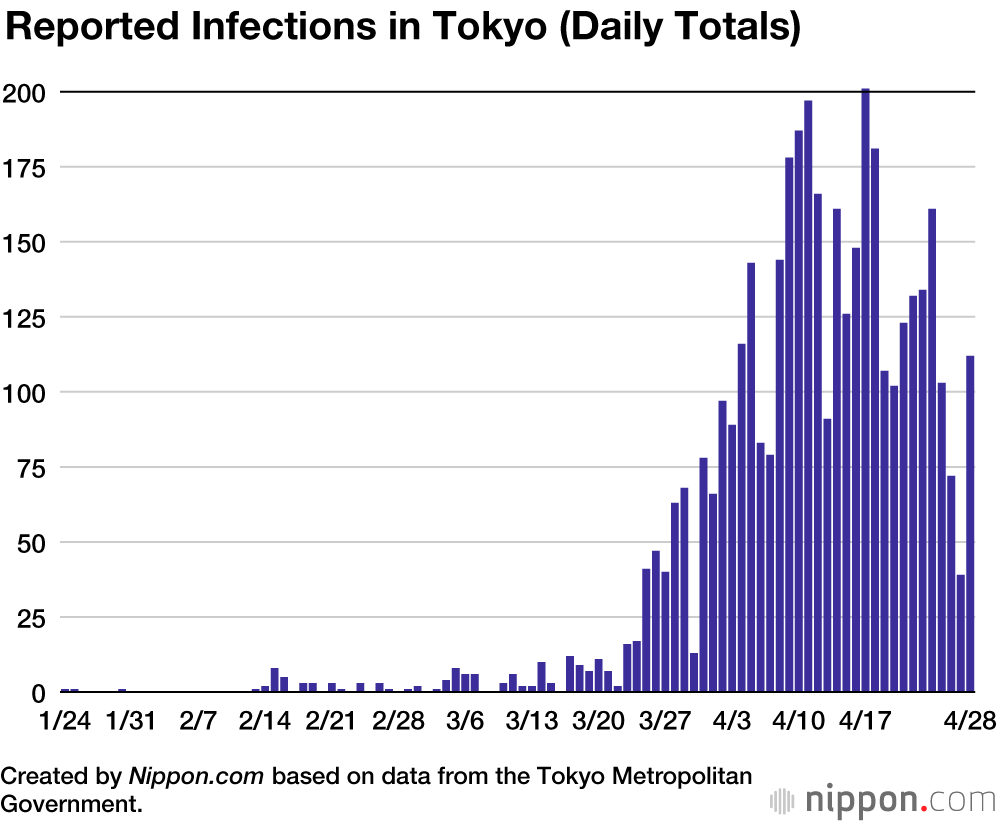 Tokyo reports 39 new cases, bringing its overall total to 3,947. It is the second successive day that fewer than 100 cases have been reported in the metropolis, although Monday’s figures have a tendency to be lower due to reduced numbers of tests on Sunday. Governor Koike Yuriko tells residents on her regular Internet broadcast that it is not a time to relax, and going outside should be kept to a minimum to prevent further spread and strain on medical resources. She says, “What we do today will save the Tokyo two weeks in the future.”

Tokyo reports 72 new cases, marking the first time the daily figure has been less than 100 since April 13.

The All Japan High School Athletic Federation on Sunday makes the unprecedented decision to cancel this year’s Interscholastic Athletic Meet, scheduled for August.

Tokyo’s “Stay Home Week to Save Lives,” a rebranding of Golden Week, begins. The period will run through May 6.

Tokyo reports 161 new cases, bringing its overall total to 3,733. The speed of growth remains high, although it has dropped compared with earlier in the month.

An infection cluster at Tokyo Metropolitan Bokutoh Hospital grows to 41 cases, and it has stopped accepting new patients.

Tokyo Governor Koike calls the period from April 25 to May 6, including the Golden Week holidays when travel is usually popular, “Stay Home Week to Save Lives,” asking residents to further refrain from leaving the home. As more people are using local supermarkets rather than those at big stations, she also calls for people to go shopping just once every three days to reduce crowding.

Actress Okae Kumiko dies from pneumonia caused by COVID-19. She was 63. On April 6, she was urgently admitted to the hospital and tested positive. It is thought that radiation therapy for breast cancer in January and February may have weakened her immune system.

After weekends when the Shōnan coast has seen major traffic congestion, including vehicles from other prefectures, Kanagawa Governor Kuroiwa Yūji urges people not to visit at a time when they should be staying indoors. Other coastal areas like Kujūkuri Beach in Chiba Prefecture have faced the same issue, and local governments are alarmed at the prospect of visitors bringing the virus with them during the upcoming Golden Week holidays.

It is announced that a man in Saitama Prefecture who was told to self-quarantine at home due to his mild symptoms died on April 21. Although he was found to be infected on April 16, the rapid rise in cases meant that he was unable to get a hospital bed and had to recuperate at home. He was admitted to the hospital on April 21 after his condition quickly deteriorated the previous day.

McDonald’s Japan closes dining areas at all its restaurants in 13 prefectures designated by the government for stepped-up measures against COVID-19. The areas will remain closed until May 6.

Japan’s total COVID-19 cases rise above 10,000. From the first recorded infection on January 15, it took around two months to reach 1,000 cases. However, the pace of infection has shown a clear increase from late March, and over the last 10 days there have been around 1,000 new cases every two days. While the number of cases overall is still relatively low, unless the pace of increase is slowed Japan could face the same situation as seriously affected Western countries in the next few weeks.

Tokyo reports 201 new cases, bringing its total to 2,794. It is the first time that the metropolis has registered more than 200 new cases in one day.

The government announces that the state of emergency will be extended from the initial seven heavily urban prefectures to the whole country, due to the increasingly rapid rise in cases and some other prefectures having recorded more than 100 infections.

Prime Minster Abe Shinzō announces that the government is planning to give ¥100,000 in cash per person as part of economic measures responding to the coronavirus outbreak, which will be included in a revision of the supplementary budget for fiscal 2020. This replaces the plan for payments of ¥300,000 to households suffering serious drops in income.

The government decides to postpone the ceremonial investiture of Crown Prince Fumihito as first in line to the Japanese throne. It had planned to hold scaled-down ceremonies on April 19, but these will now take place at a later date.

Tokyo reports 91 new cases, bringing its total to 2,159. Meanwhile, in Kansai, the chief and deputy chief of Kobe Nishi Police Station are found to be infected, among many cases stemming from a party held at the end of March. Around 120 officers are self-isolating at home. Four doctors at the Japanese Red Cross Kobe Hospital also test positive for the coronavirus following a case involving a nurse at the hospital reported on April 11.

Tokyo reports 166 new cases. Governor Koike says in a YouTube video that it was unclear how infection occurred in 64 cases, but it was believed that 87 cases were due to transmission within medical facilities. Tokyo now has 2,068 cases overall, of which 75% have been reported since the start of April. Other prefectures like Kanagawa and Chiba under a state of emergency are also recording new daily cases in double figures as the national total rises to around 7,000. 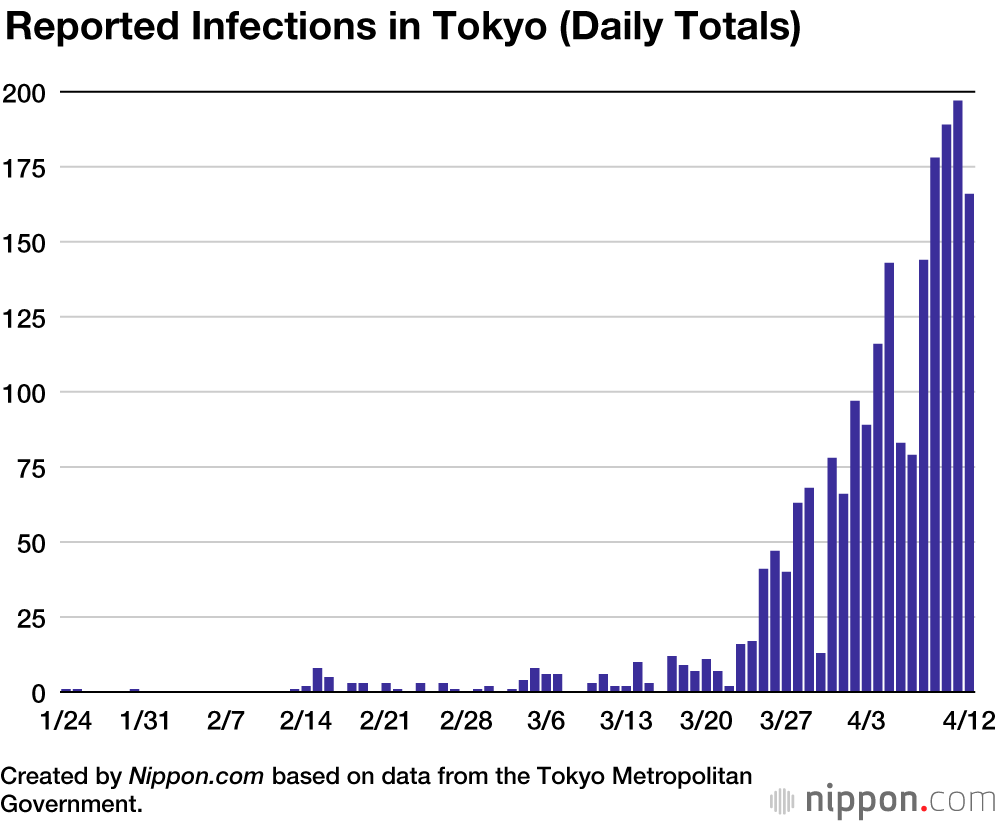 Tokyo reports 189 new cases, the highest single-day total to date, bringing the overall number of infections to 1,705. The metropolis is aiming to slow down the spread of COVID-19 by requesting closure of bars and nightclubs, as well as shorter opening hours for izakaya and restaurants.

The first reported case in Tottori means that Iwate is now the only prefecture with zero infections.

Tokyo reports a record 181 new cases, with the rate of increase rising by almost 40 from April 8. It now has 1,519 cases altogether, of which 998 were reported since the beginning of April. 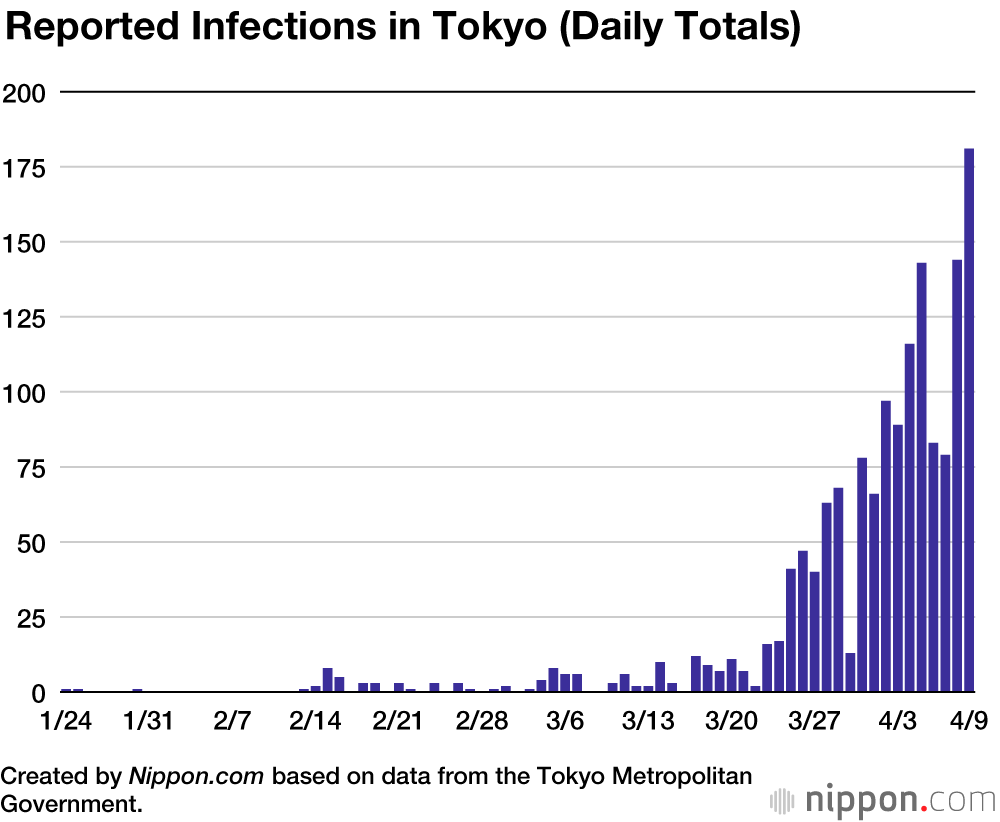 Aichi Governor Ōmura Hideaki asks that the prefecture be added to the list of areas covered by the state of emergency, due to its high number of cases.

Tokyo reports 144 new cases, the highest daily total to date for the metropolis. The figure previously topped 100 on April 4 and 5 before falling below it for the next two days. Kanagawa, also under a state of emergency, reported a record 43 new cases.

Another 80 new cases are reported in Tokyo, bringing its total up to 1,195. Of the overall figure, 56% came in the first week of April. In 57 of the April 7 cases, it was unclear how infection occurred. 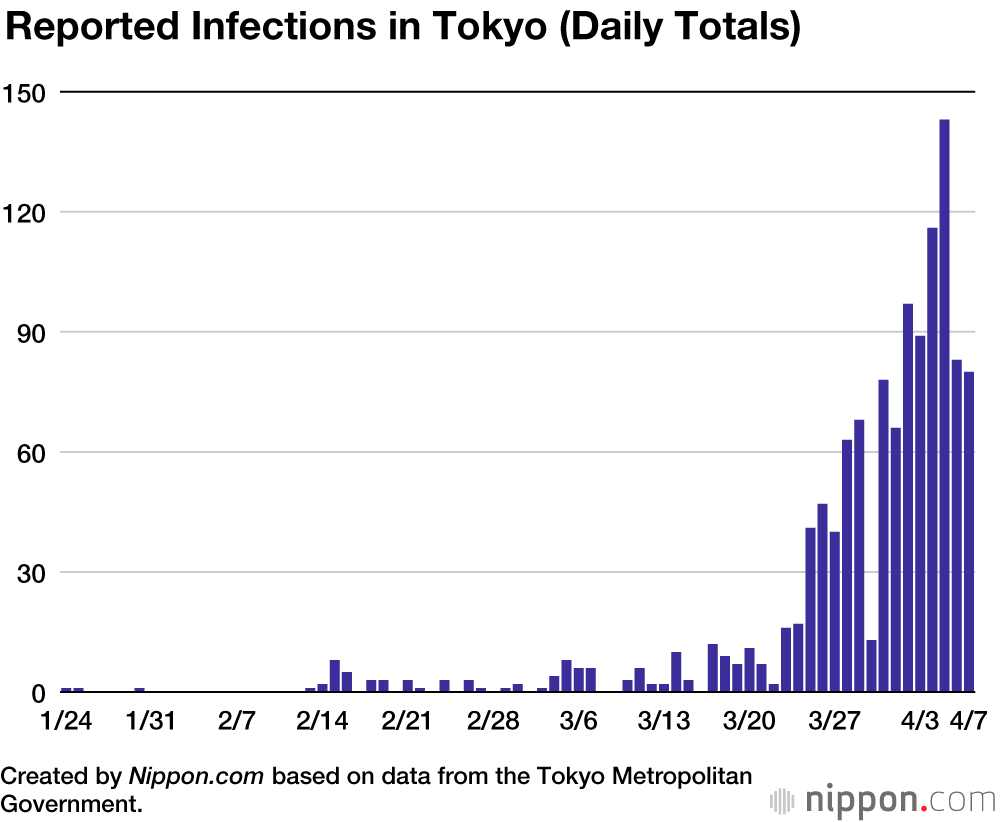 At a press conference after he declared a state of emergency, Prime Minister Abe said that if infections continued to grow at the same pace in Tokyo, there would be more than 10,000 cases after two weeks and more than 80,000 after a month. However, by reducing personal contact by 70% or preferably 80%, the number of infections would peak and start to decline after two weeks. He also called for people living in cities not to move to other prefectures, such as the homes of relatives, where there are many seniors who would be at high risk if infections spread in those areas and less robust medical systems to care for them.

Prime Minister Abe declares a state of emergency in the prefectures of Tokyo, Kanagawa, Saitama, Chiba, Osaka, Hyōgo, and Fukuoka, which will last until May 6. While there will be no city lockdowns as seen in some countries, he called for cooperation in preventing further spread of infections.

The Tokyo Metropolitan Government begins transferring asymptomatic patients and those with mild symptoms to a budget hotel it has leased in Chūō. This frees up hospital beds and medical resources for serious cases.

Prime Minister Abe announces that he plans to declare a state of emergency on April 7, which will apply to the prefectures of Tokyo, Kanagawa, Saitama, Chiba, Osaka, Hyōgo, and Fukuoka. In these heavily urban areas, where rises in infections have led to concerns about strains on the medical system, citizens will be encouraged to cooperate in preventing further spread by avoiding crowds, closed spaces, and conversations in close proximity. Abe says that there will not be the same city lockdowns as seen in some countries, and economic activity will continue as much as possible alongside bolstered containment efforts.

Prime Minister Abe announces a ¥108 trillion economic stimulus package, equivalent to around 20% of Japan’s gross domestic product. It will include payments of ¥300,000 to households suffering serious drops in income due to the pandemic and the creation of a system to provide interest-free loans to small businesses through private financial institutions.

Tokyo records another 143 new cases, topping 100 for the second successive day, as its overall total rises to 1,033. Governor Koike Yuriko appears on an NHK program where she calls for the national government to declare an emergency as soon as possible. 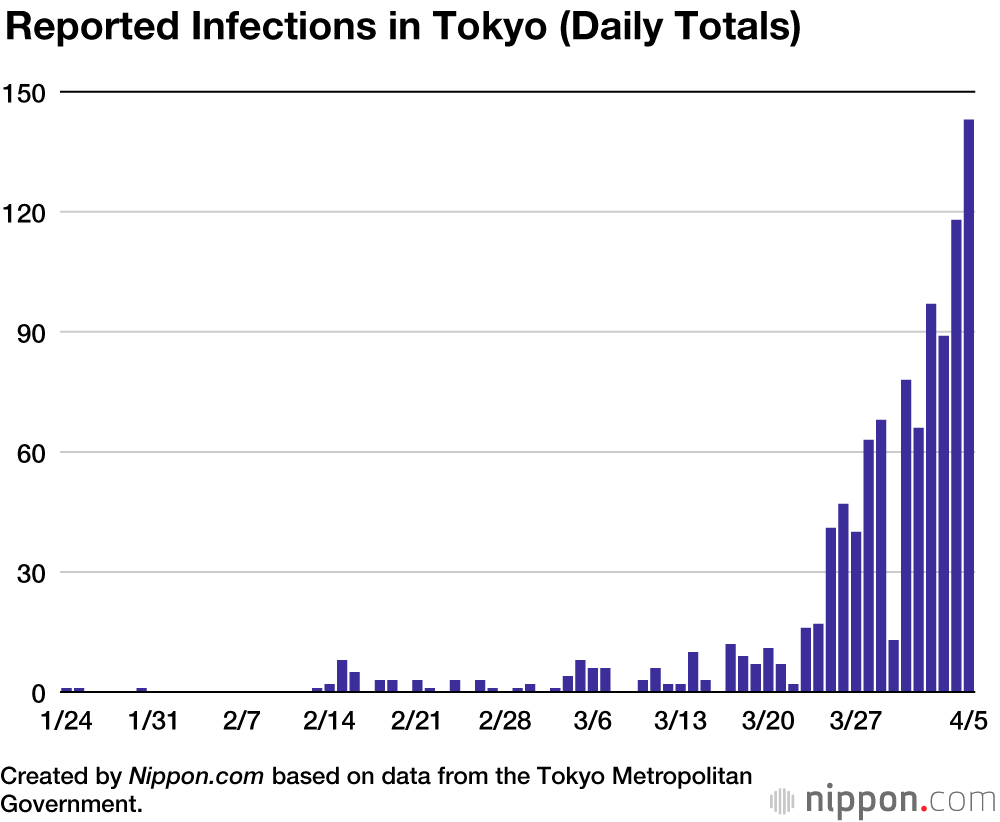 Tokyo records 117 new cases, as its daily total tops 100 for the first time, to reach an overall figure of 891. Other heavily urban prefectures see continued increases, including 41 in Osaka, 27 in Fukuoka, and 18 in Saitama.

A police officer at the Akasaka Police Station in Tokyo tests positive for the coronavirus, leading to around 70 of her colleagues being put on leave. The Metropolitan Police Department dispatches other officers to perform their duties.

The total number of infections in Japan rises to some 3,000, with more than 300 new cases in a day for the first time ever. Another 89 cases in Tokyo bring its total to 773, while there have also been continued increases in Kanagawa, Saitama, and Fukuoka Prefectures.

The government announces that it will provide ¥300,000 each to households where income has dropped due to the pandemic, as part of an economic stimulus package it is aiming to prepare by April 7.

The Ministry of Health, Labor, and Welfare releases a new map showing 26 clusters of infections in 14 prefectures.

Tokyo reports 97 new cases, a record for a single day, of which 21 are connected to a Taitō medical institution. The total for the metropolis is now 684. 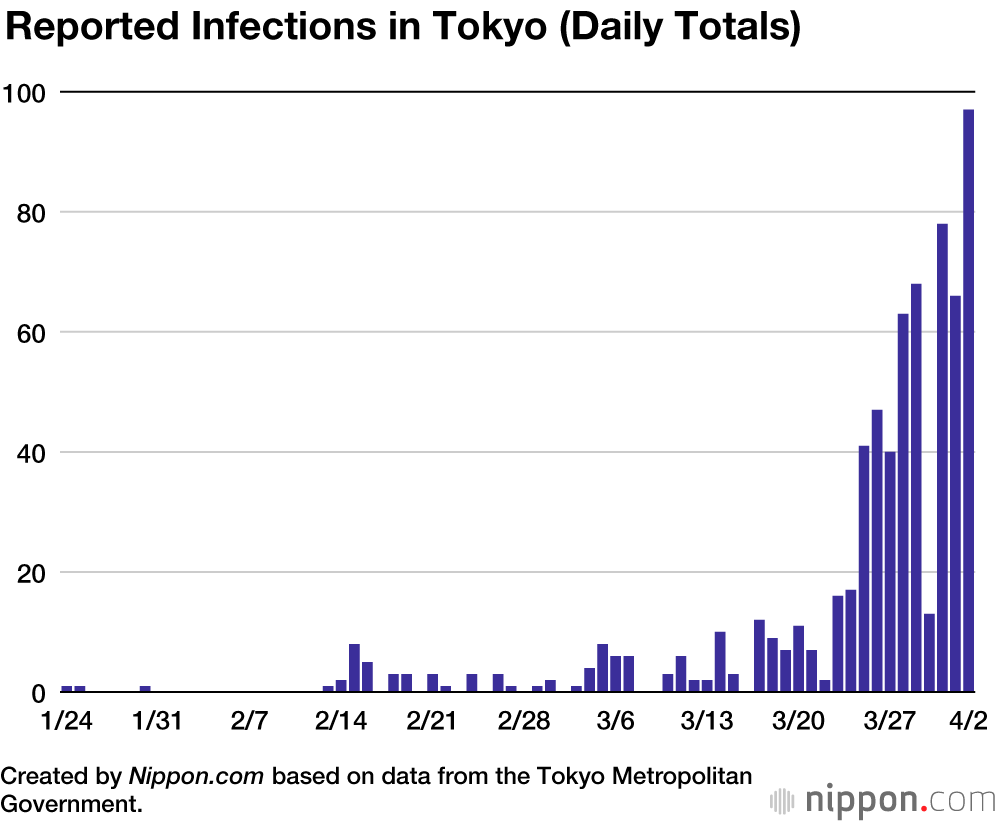 A government panel of experts calls for drastic measures, saying that medical systems in the prefectures of Tokyo, Kanagawa, Aichi, Osaka, and Hyōgo are on the verge of crisis.

Prime Minister Abe says that current circumstances do not require declaration of a state of emergency, while acknowledging that any reduction in vigilance could result in an explosive rise in cases. He says that even if there was a declaration, there would not be the kind of city lockdowns seen in France. The same day he announces that two cloth masks from a stock produced by the government will be distributed to each of Japan’s more than 50 million households.

Click here for updates from late February and March.