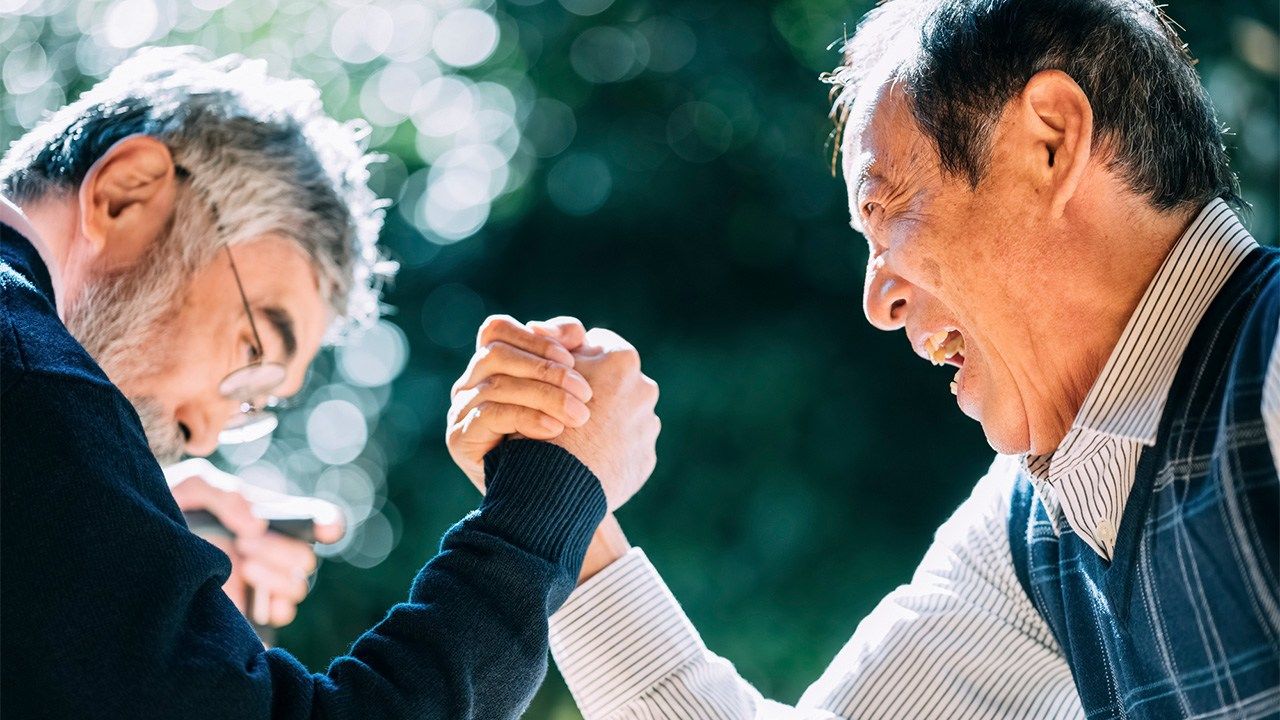 Life Expectancy for Japanese Men and Women Rises in 2019

The average life expectancy in Japan in 2019 was 87.45 years for women and 81.41 years for men. Annual figures compiled by the Ministry of Health, Labor, and Welfare have set new records for eight consecutive years for men and seven for women.

Over the past three decades, the average lifespan has increased by more than five years for both men and women. In 1989, life expectancy was 81.77 years for women and 75.91 years for men. Breakthroughs in medicine, along with rising health awareness among the public, have contributed to the population’s ever-lengthening lifespan. 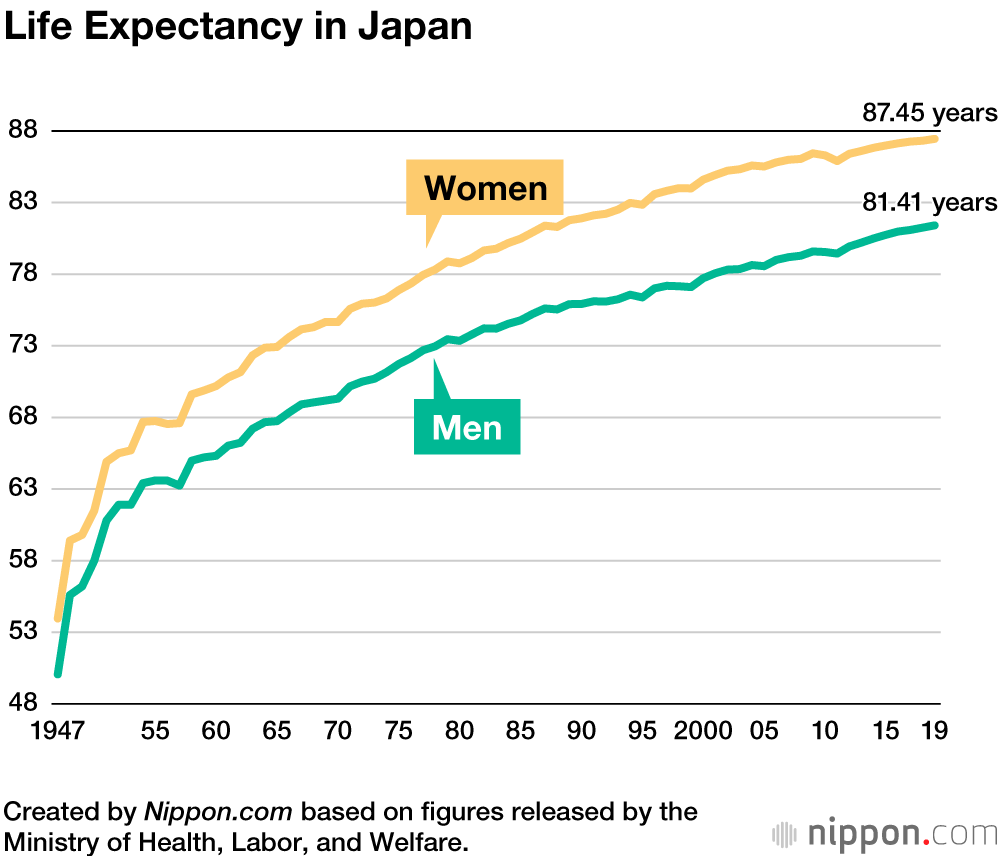 Comparing year-on-year changes in average lifespan by cause of death shows that changes in fatality rates for major killers like cancer, heart disease, strokes, and pneumonia had a positive effect on average lifespans for both men and women. People who ultimately died of these diseases in 2019 lived longer overall on average than those who died of them the previous year. 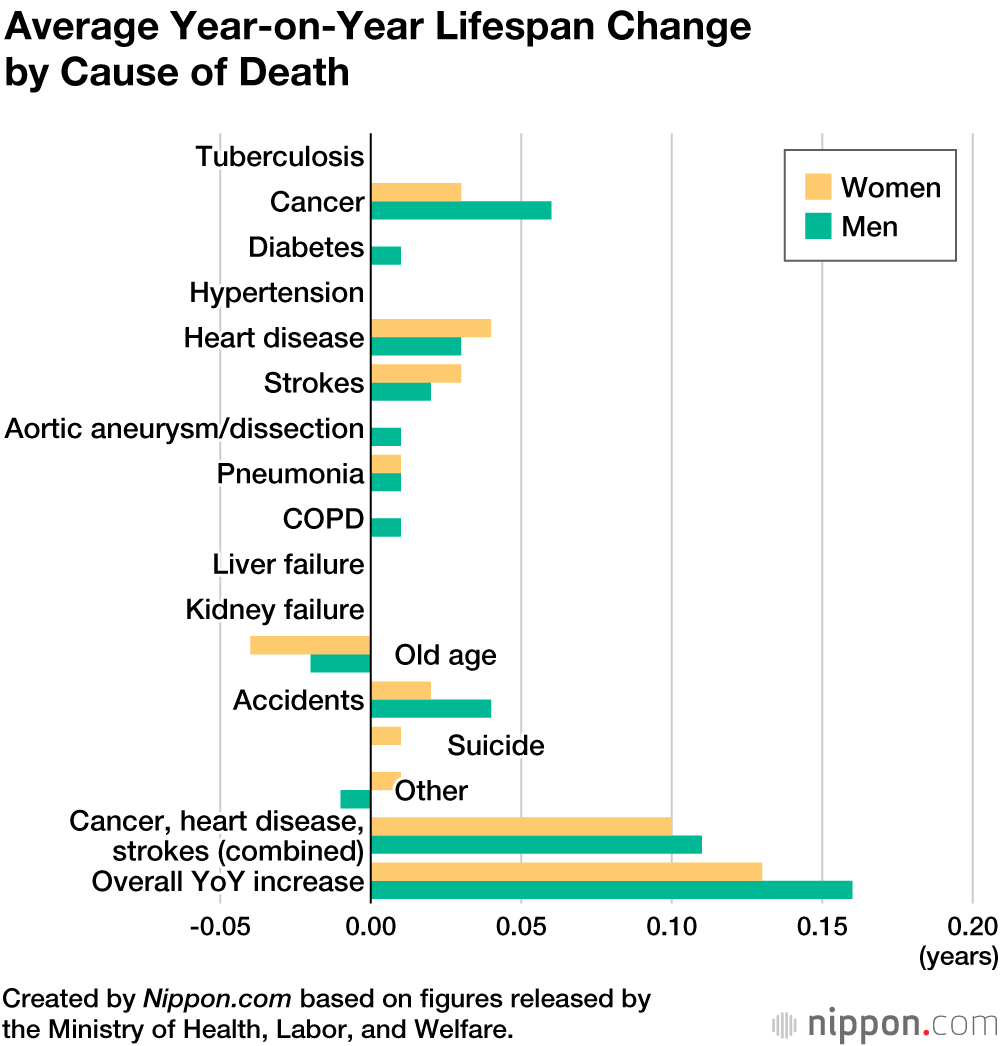 The MHLW estimates that 28.20% of men and 19.95% of women born in Japan in 2019 will die of cancer. Even if it is no longer quite the incurable disease it once was, it remains the leading cause of death for both. It is estimated that eradicating cancer alone would add 3.54 years to the average lifespan for men, and 2.84 years for women.

Created by Nippon.com based on figures released by the Ministry of Health, Labor, and Welfare. *2018 data.

It has become a media commonplace in recent years to talk of a coming era in which the average person can reasonably expect to live to 100. That era may not be with us yet, but it is getting closer all the time.

With increased life expectancy, however, have come a new host of anxieties: How will people save the funds they need to sustain them through their longer retirements, and how will the country’s hospitals and care homes find the employees they need in an aging society with a dwindling working population?