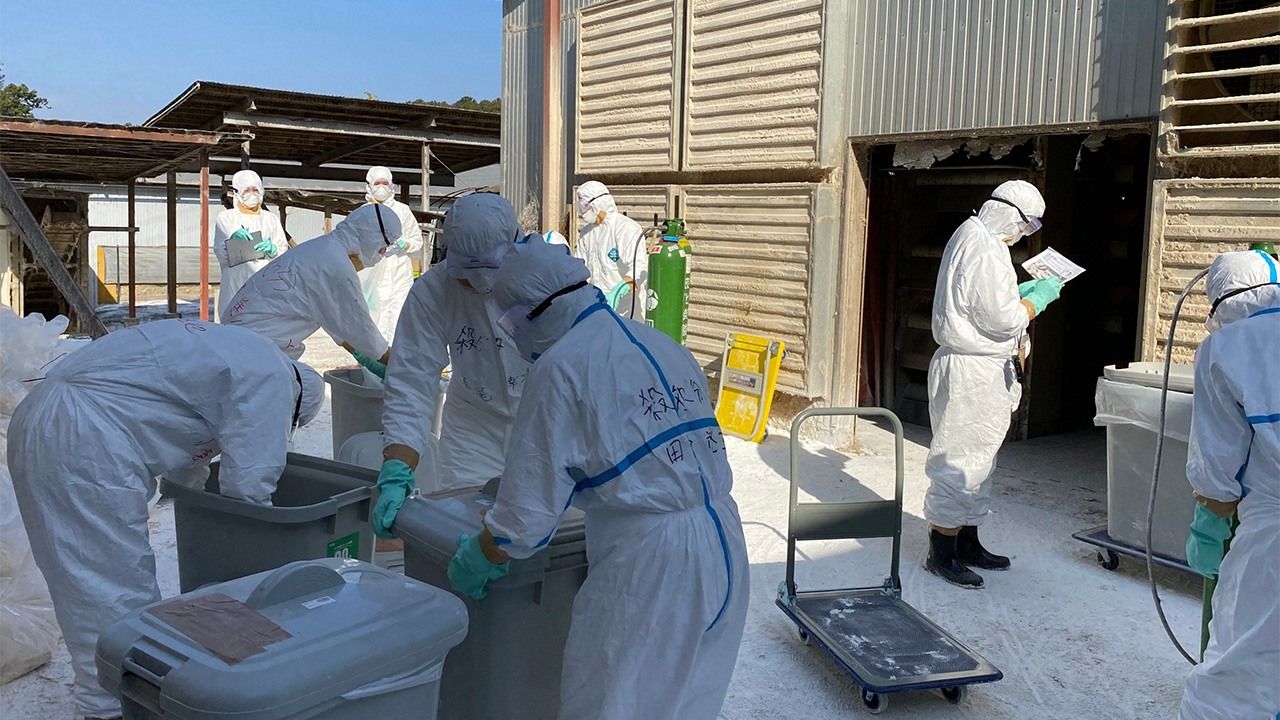 Society Work Economy Feb 17, 2021
A major outbreak of the H5N8 avian influenza virus in Japan has led to a record number of birds being culled.

Japan has been hit by a major avian influenza outbreak, particularly in the west of the country. During the 2020/2021 season, since the first case confirmed in November 2020 at an egg-laying chicken farm in Mitoyo, Kagawa Prefecture, there have been a further 41 farms affected in 17 prefectures (as of February 2, 2021) with 7.1 million birds culled. This is a record high for a single season. Chicken farms have been most affected, including those for egg-laying birds and broilers for meat production, as well as those for raising chicks. On January 21, an outbreak was also confirmed at a farm producing duck meat in Chiba Prefecture. 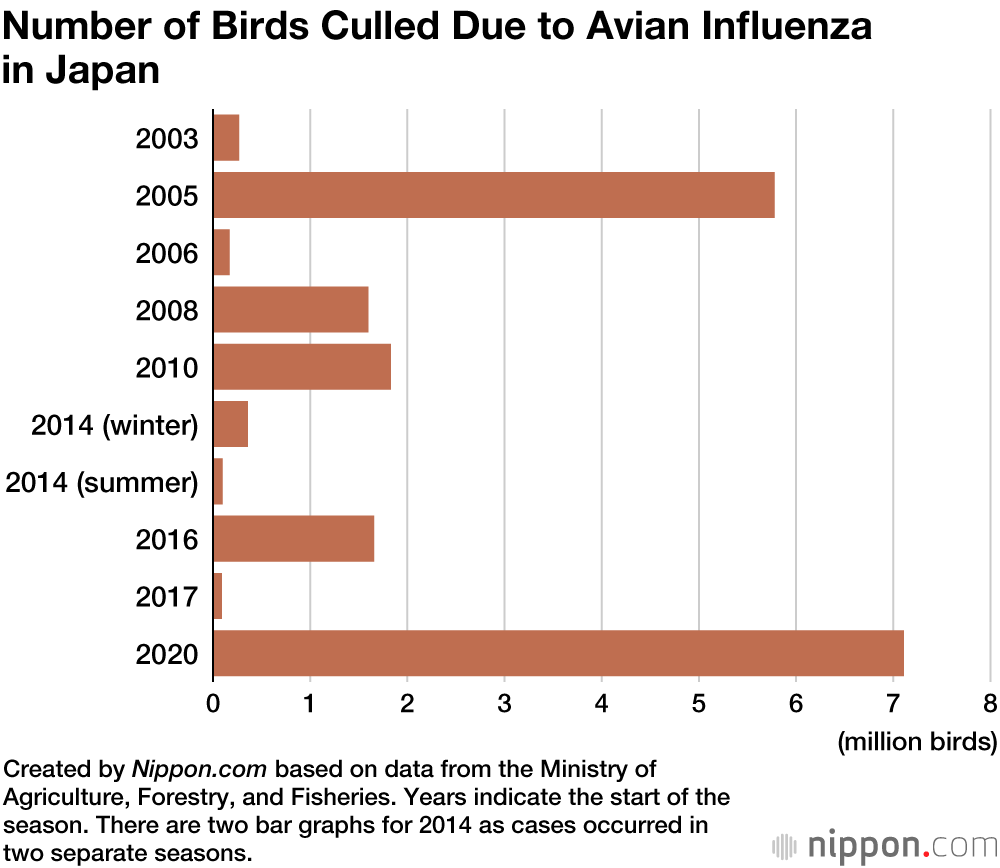 Created by Nippon.com based on documents published by the Ministry of Agriculture, Forestry and Fisheries (as of February 2, 2021).

A poultry farm where avian influenza was confirmed on February 2 was one of the largest in Ibaraki Prefecture and all 840,000 of its egg-laying hens were culled. This is the first time since 2006 that there has been an outbreak in Ibaraki.

According to livestock statistics from the Ministry of Agriculture, Forestry and Fisheries, Ibaraki is the prefecture with the highest number of egg-laying hens at 15.5 million, followed by Chiba with 12.4 million. Miyazaki has the highest number of broilers in the country with 28.2 million, while the neighboring prefecture of Kagoshima ranks second for broilers and third for egg-laying hens. The long-term spread of avian influenza in leading production areas has inevitably affected supply and demand of chicken and eggs.

The common factor in all the poultry avian influenza outbreak cases so far this season is the highly pathogenic avian influenza H5N8 virus with a high fatality rate detected each time. In 10 prefectures yet to experience farm outbreaks, the same virus has been found in wild birds and feces at and alongside rivers and lakes.

It is a similarly severe situation in other parts of the world too. More than 20 countries in Europe have detected the same H5N8 virus this season. In Asia, it has been detected in 7 countries and regions, particularly Japan and South Korea, and has also been found in the Middle East, including Iraq and Kuwait. The Ministry of Agriculture, Forestry, and Fisheries believes the virus was carried by migratory birds flying into Japan from overseas.

In South Korea, where avian influenza is even more widespread than in Japan, in this season alone 8.1 million birds have been culled. However, it has recently been announced that avian influenza viruses have been isolated from wild birds too, so the infection cannot be stopped. Experts point out that the reason for continued outbreaks of highly pathogenic avian influenza around the world is the increasing amount of the virus in the environment.

The virus, brought in by migratory birds, is thought to have entered poultry farms in Japan through movement of mice and other wild animals, insect pests, people, and vehicles. Farms are implementing thorough hygiene management to prevent infection. Workers disinfect their hands, as well as change their clothes and shoes, vehicles coming in are disinfected, and nets have been installed to prevent wild animals from entering.

Since 2003, which saw the first outbreak of highly pathogenic avian influenza in 79 years in Japan, a characteristic of particularly destructive years is that the virus can still be detected in March. Migratory birds overwinter in Japan until around the Golden Week holidays at the start of May, so there is a risk the virus may spread further. This season, it is more important than usual to stay alert.