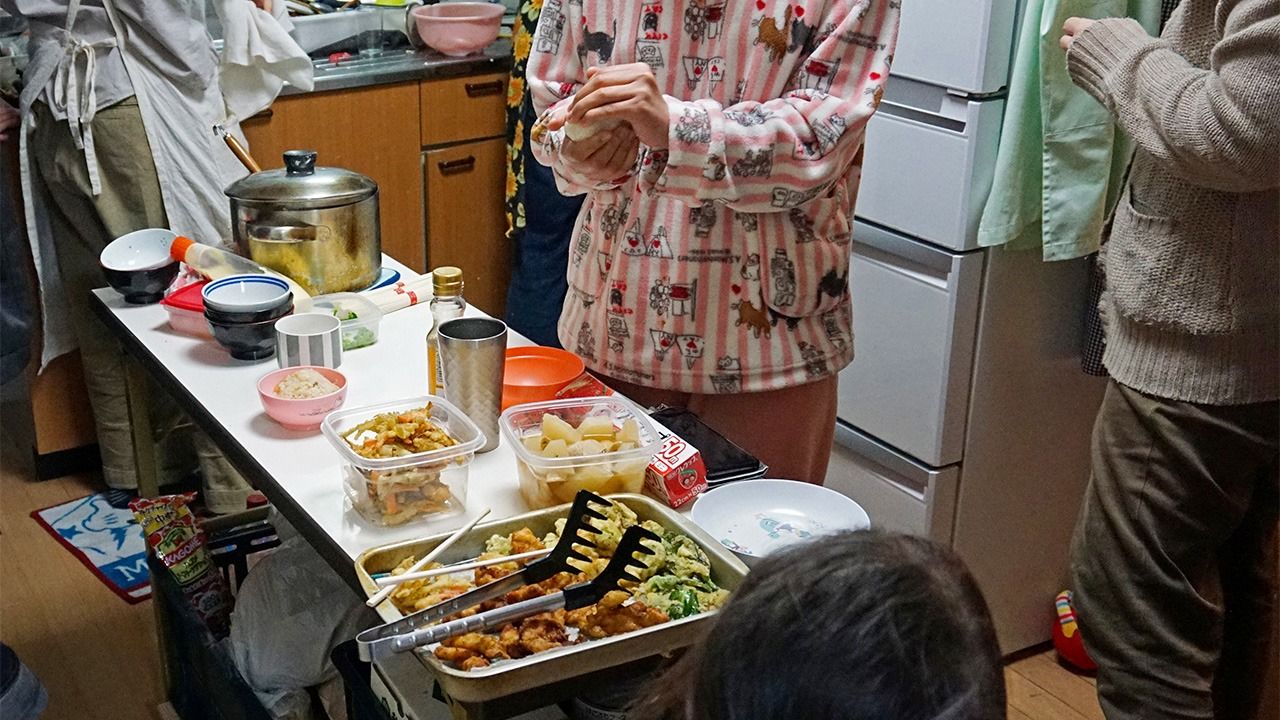 Society Apr 7, 2021
Only 10% of children’s cafeterias for those in difficult family or financial circumstances are operating normally during the COVID-19 pandemic.

The results of a February 2021 survey conducted by the Tokyo-based NPO National Children’s Cafeteria Support Center Musubie show that only around 10% of children’s cafeterias—special services offering children free or low-priced meals and safe places to socialize—are operating normally amid the COVID-19 pandemic. In most cases, they have been replaced by other services, such as the distribution of boxed lunches, but the survey results indicate the emergence of problems such as budget shortfalls and volunteer shortages.

Musubie received responses from 334 organizations running children’s cafeterias in 33 prefectures nationwide. When asked about their current operating situation, 6.1% said that all the students are eating together in the cafeteria as usual, while 5.8% said that through restricting student numbers or offering outdoor spaces the children are able to eat cafeteria food. In other words, only around 10% of the organizations are offering cafeteria-centered food services.

Among the groups surveyed, 23.3% were distributing boxed lunches that students come to pick up, while 35.9% were providing services that combined cafeteria operation and distribution of ingredients and boxed lunches. Around 10% of the organizations surveyed had been forced to suspend services. 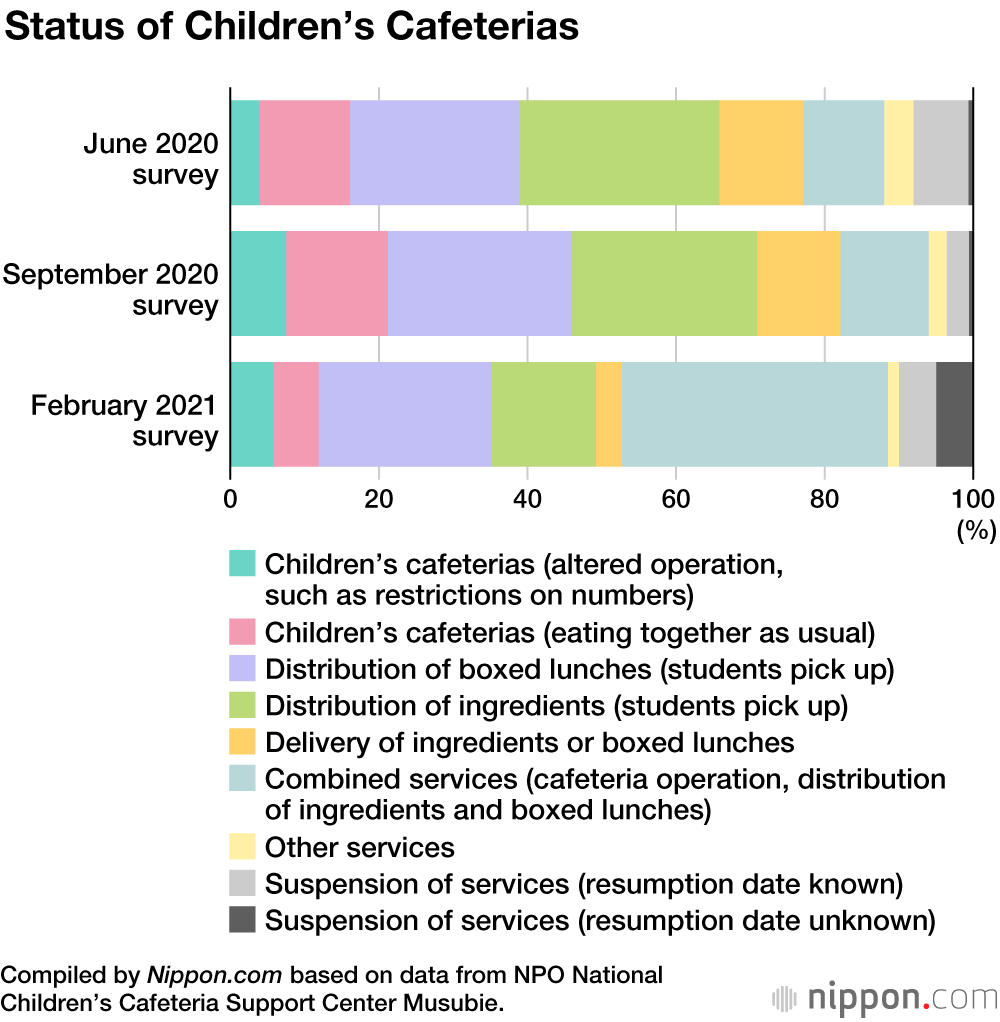 Among the 343 respondents, 50.7% said that they could not foresee when the cafeteria would be able to resume normal services involving children eating together. 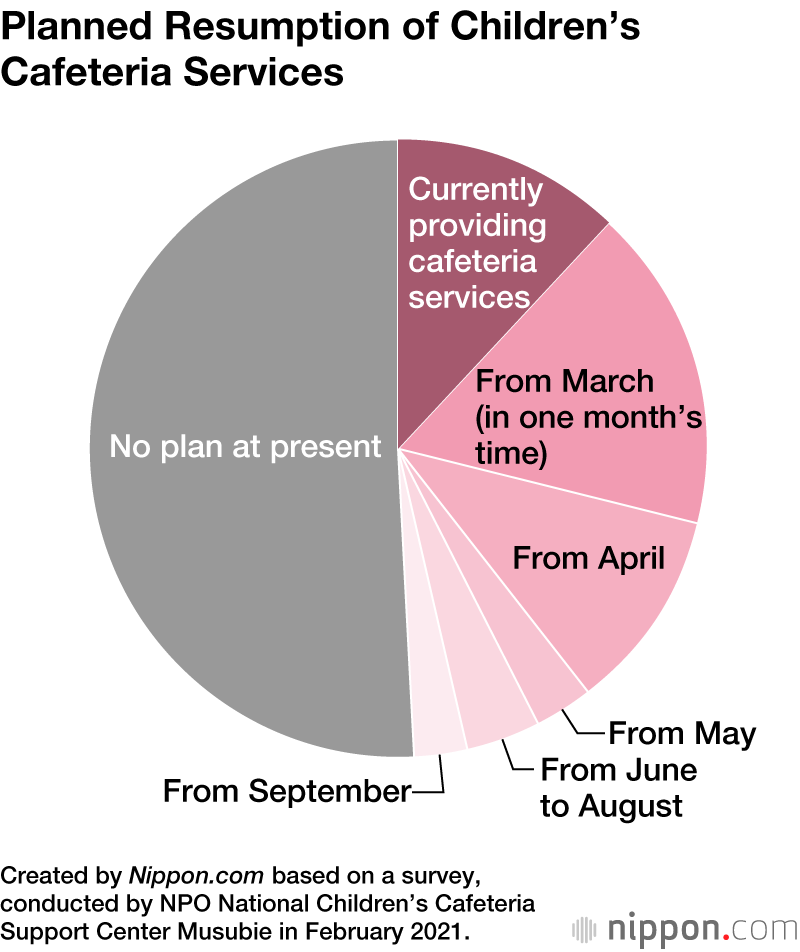 The survey conducted in June 2020 found that 38.7% of the organizations had no plan to resume normal services, and in the subsequent survey, conducted in September of the same year, the figure rose to 48.0%. The main reason for being unable to resume services, according to the survey results, was the difficulty of taking measures to prevent infections, as cited by 55.4% of the respondents.

In Japan, children’s cafeterias are operated by various groups or individuals designated by the community, including NPOs. Cafeteria meals are prepared either at public facilities, private homes, restaurants, or empty stores.

The most common problem related to children’s cafeterias, cited by 56% of the survey respondents, was unease about the pandemic and the response for preventing infections, followed at 51.9% by the issue of supporting people in need (such as children from poor households), 42.0% by the issue of budget shortfalls, and 24.2% by the issue of staff shortages.

The head office of Musubie noted that in order to prevent overcrowded situations, it is difficult to offer services involving people gathering together. It is also difficult to offer interactive events between children and older volunteers, who are at higher risk of illness. At the same time, it is extremely important to offer children a place to be.” In the future, Musubie wants to work with local governments and to make use of public halls and other facilities for events, while creating explanatory videos on how to prevent infection as one part of its support activities.