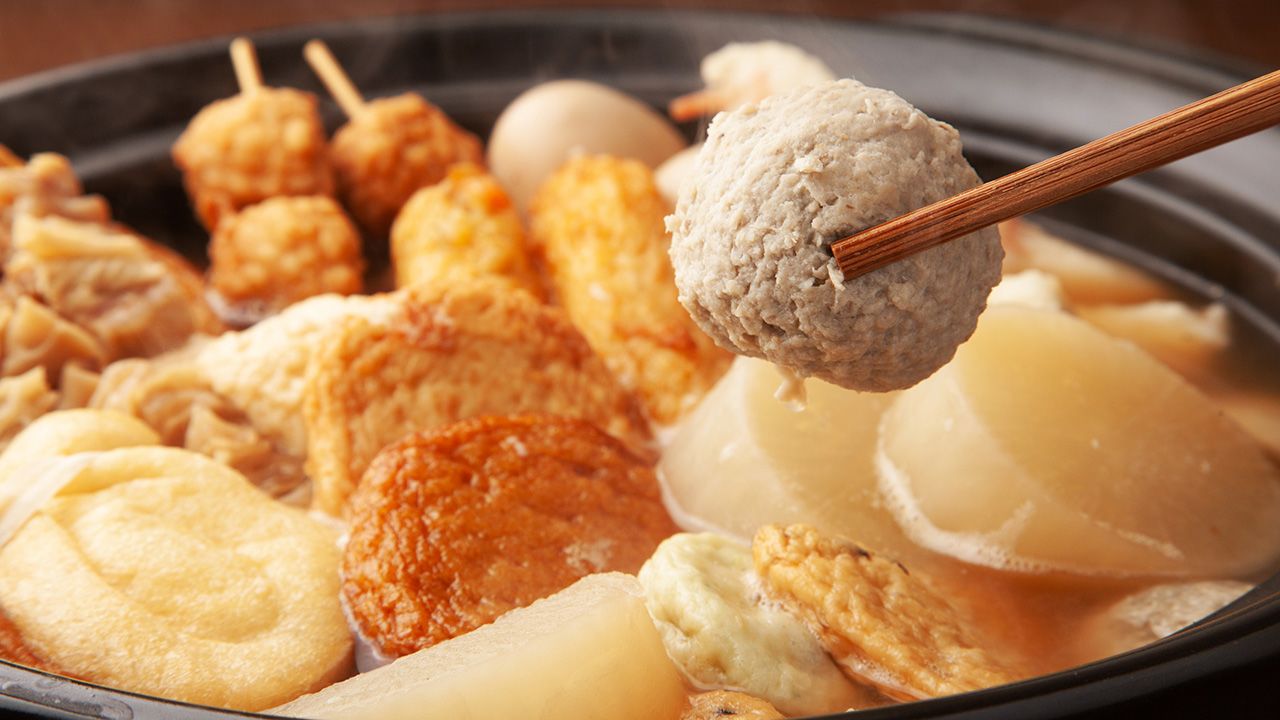 The Many Tastes and Textures of “Surimi”

Food and Drink Nov 8, 2021
In Japan, there are many different kinds of tasty foods made from surimi, a paste using minced fish or other seafood.

As we move toward winter and temperatures drop, the urge to eat piping hot oden gets stronger. This winter hot pot wouldn’t be complete without fluffy, soft hanpen and flavorful chikuwa. And don’t forget the “bomb” - a whole boiled egg enclosed in surimi fish paste. Although the appearance and texture of these food items are different, they all have one thing in common: surimi. Here’s a look at some of the most popular items made from this versatile minced fish paste or fish cake.

Chikuwa is made by wrapping surimi around bamboo sticks and then steaming or broiling it. It was originally called kamaboko because of its resemblance to kamanoho, or bulrush ears, which grew in clusters by water.

An ancient chronicle compiled in the mid-Heian period (794–1185) contains a description of a celebratory banquet held in 1115 at which one of the dishes served was called kamaboko, accompanied by an illustration of food shaped like bulrushes.

It later became known as chikuwa kamaboko and, as time passed, this name was shortened to chikuwa (literally “bamboo ring”). 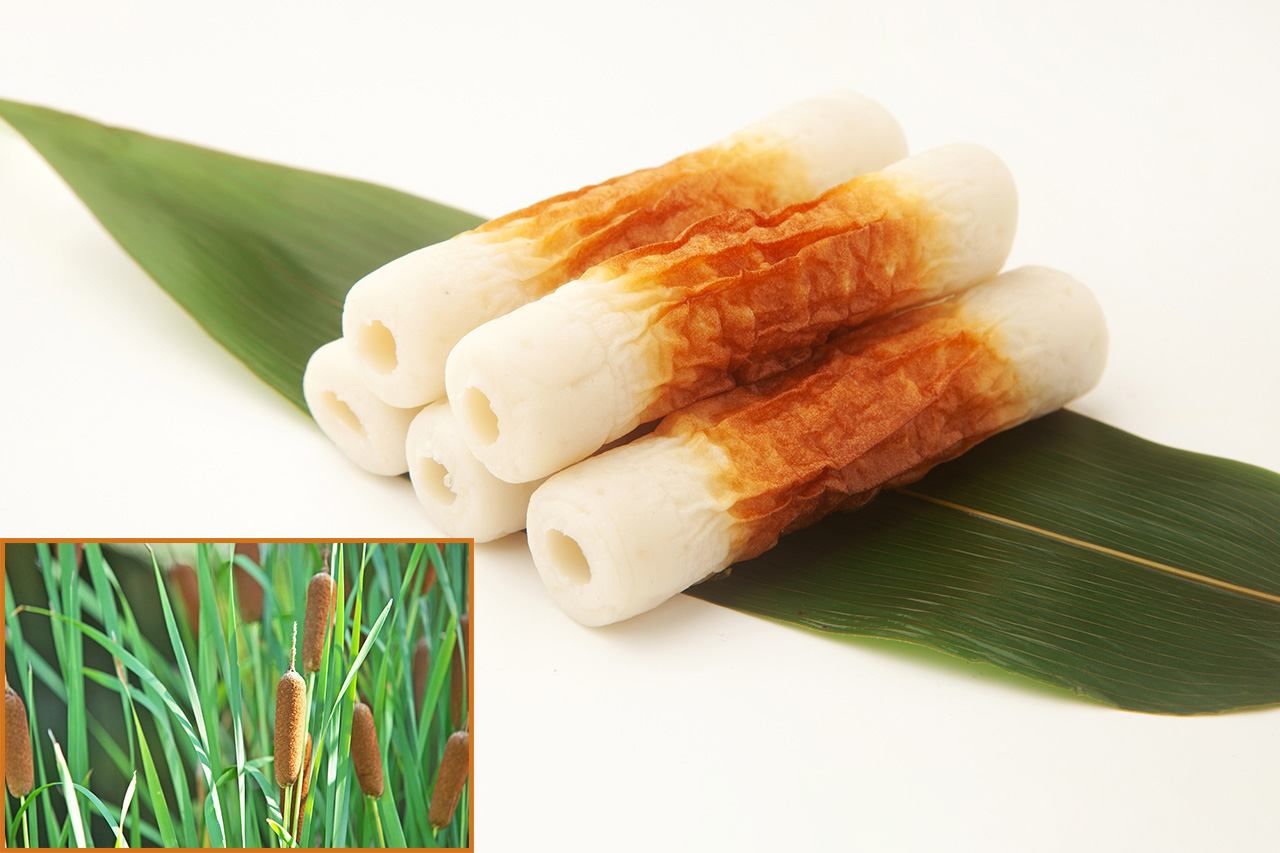 Kamaboko is made by heaping surimi onto a board of cedar and shaping it with a spatula into a half-moon shape, which is then steamed. A combination of red and white surimi is often used for special occasions, especially in osechi ryōri New Year cuisine. In western Japan, the custom is to add mirin or other sweet liquid seasoning and grill the kamaboko after it has been steamed to give it a baked color. 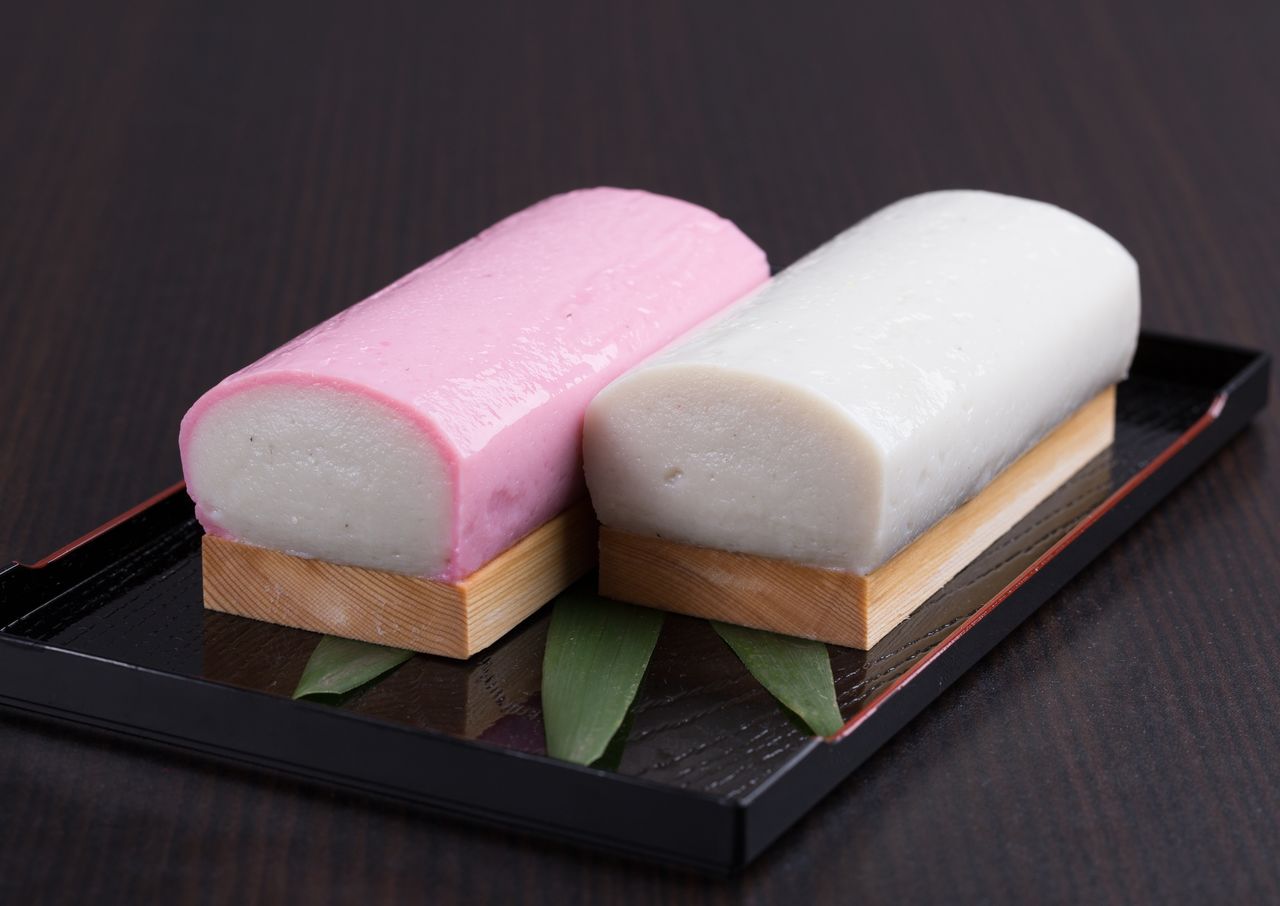 This is a general term for fish surimi that has been shaped and then fried in oil. It is thought to have been introduced from China into the Ryūkyū Kingdom (now Okinawa Prefecture) and then spread throughout Japan, starting in the province of Satsuma (now Kagoshima Prefecture). There are many varieties, including with extra ingredients like vegetables and hijiki seaweed, or those popularly known as bakudan or “bombs” that have been wrapped around food such as shrimp and boiled eggs.

The name satsuma-age is mostly used in eastern Japan, while in western Japan the food is called tempura. In Kagoshima, where its name comes from, it is more well-known as tsuke-age. 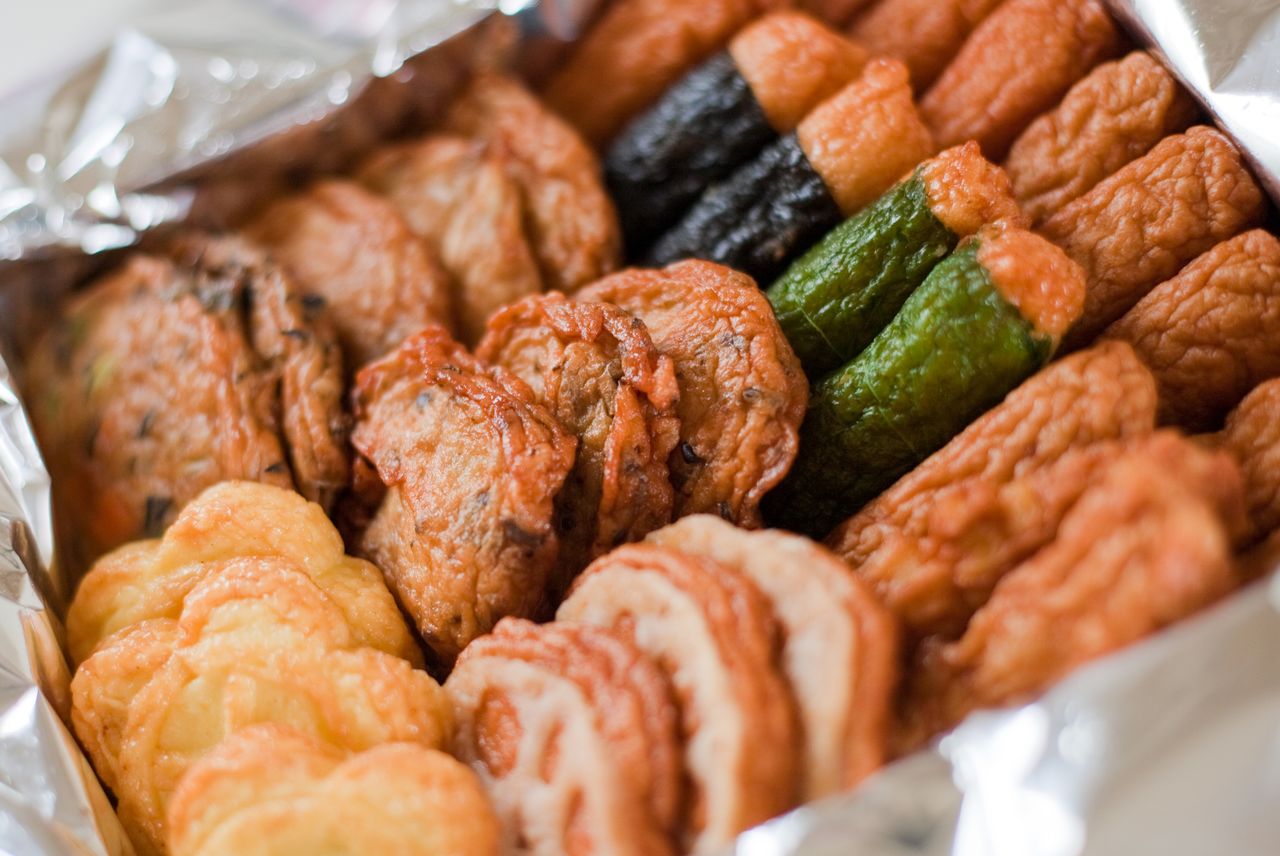 Hanpen is made by adding yam to surimi made from shark meat, such as blue shark and shortfin mako shark, and stirring it to incorporate air, after which it is shaped and then boiled. In order to create the pure white color of the hanpen, the surimi is soaked in water many times while being processed to rinse off any blood and fat. There are a number of theories how hanpen got its name, including that it was named after a chef called Hanpei or that half the lid of a bowl was used to shape it into a semicircle (han-en).

Incidentally, in Shizuoka Prefecture, it is common for a variety called kuro (black) hanpen to be made from blue fish, such as mackerel, horse mackerel, and sardines. 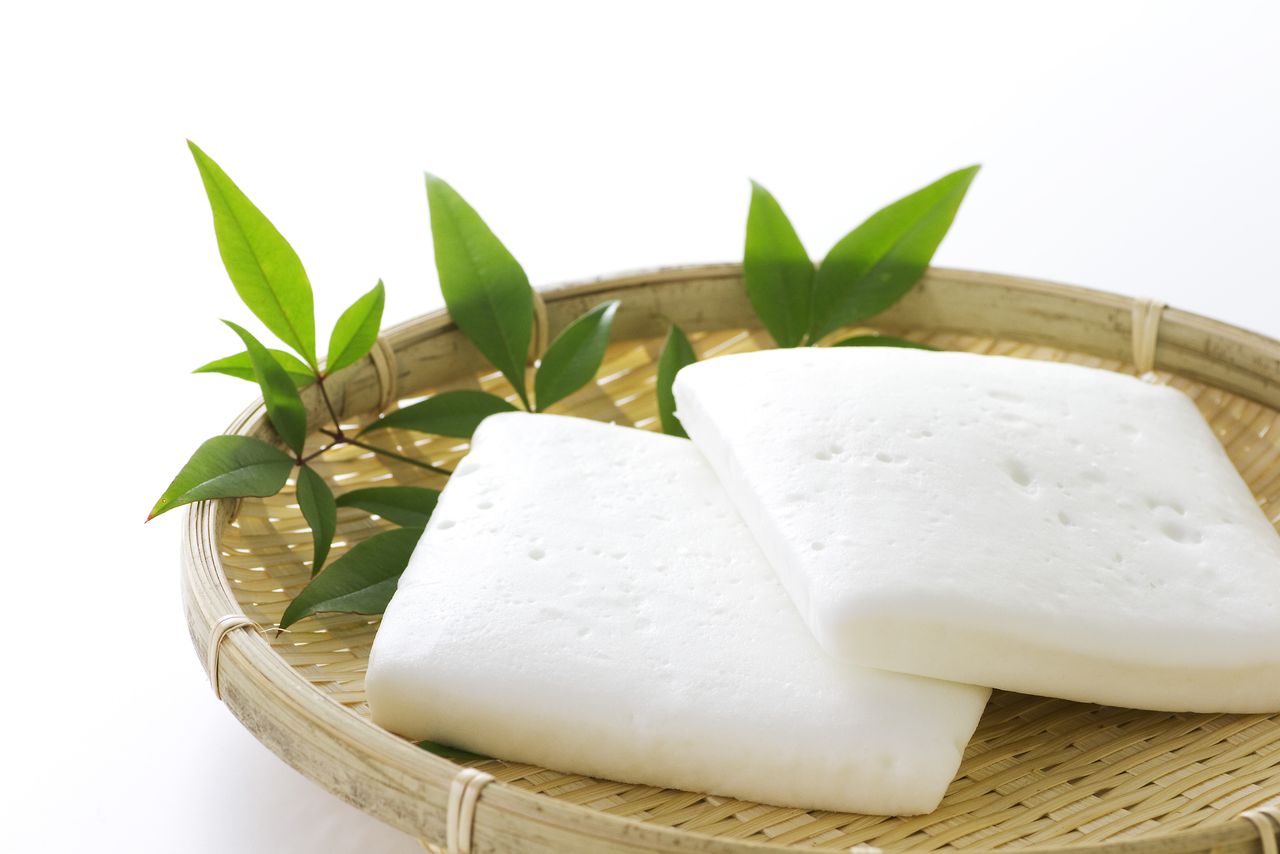 This is kamaboko flavored with crab extract and colored red using paprika and other ingredients. It is processed so that it can be torn into thin strips. Kanikama began being produced in the mid-1970s and at that time it was just a type of crab-flavored kamaboko. In recent years though, more high-end products have been developed that closely resemble the taste and texture of real crab.

It is exported to Europe and the United States as a healthy low-calorie food. 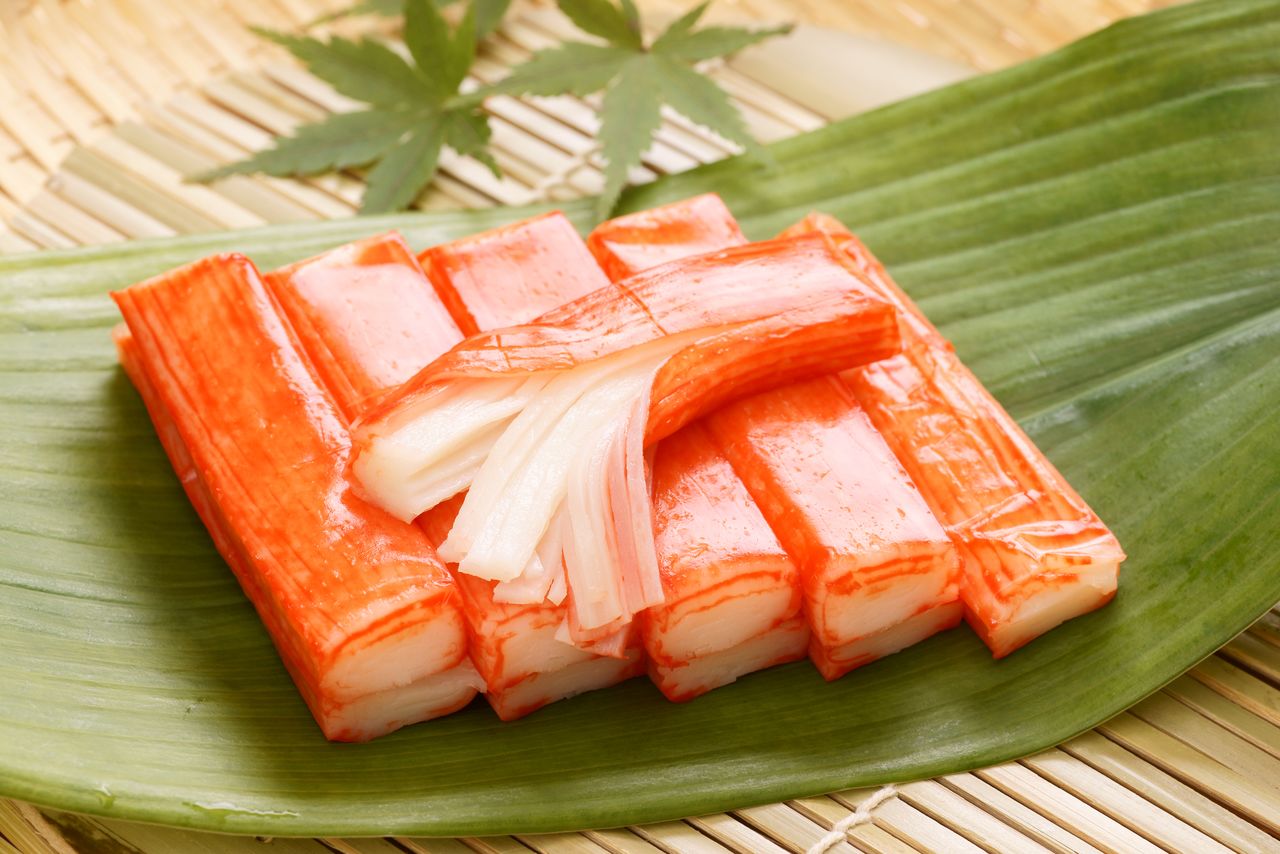 This is made by adding a thin layer of pink-colored surimi to white surimi, and then rolling it up and steaming it. Its name derives from its cross-sectional design looking like the swirls of water in the famous Naruto whirlpools off the coast of Shikoku. It was originally made by spreading a thin layer of surimi on konbu (kelp) that was then rolled and steamed. During the Shōwa era (1926–1989), it was a standard ingredient in ramen dishes. 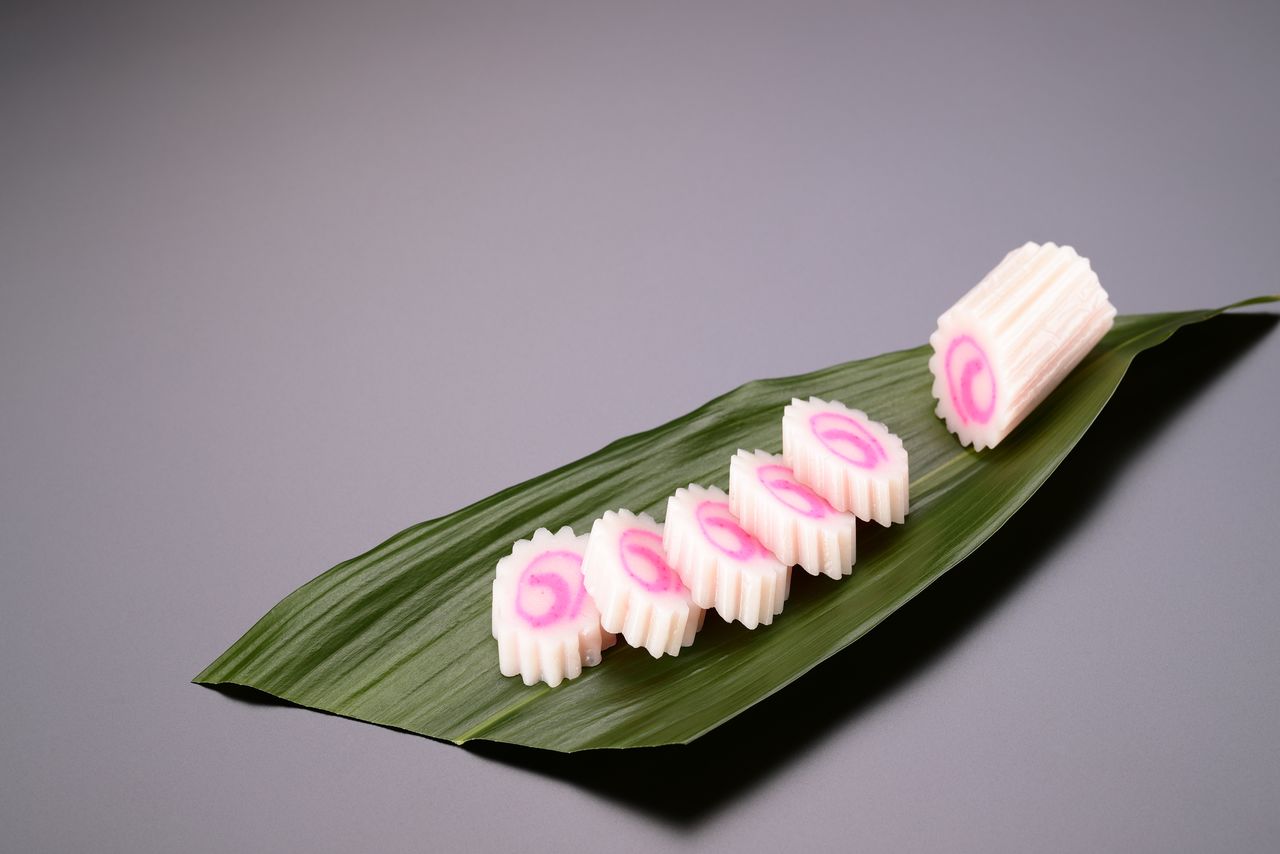 This is made the same way as kamaboko, and it is economical because the main ingredients are shark sinew and cartilage, which usually get removed during the manufacturing process. These give it a characteristic crunchiness. It is not very well-known nationwide and is normally only found in oden in prefectures around Tokyo in the Kantō region. 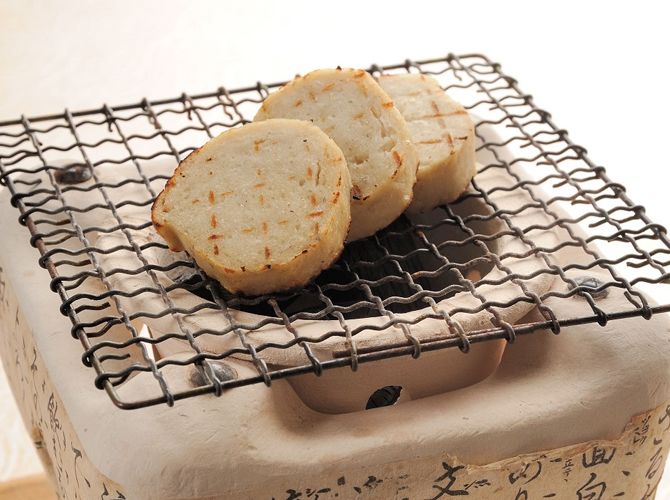 This surimi, made from fish like horse mackerel and sardines, is shaped into dumplings and then boiled. The name comes from tsumiire, meaning to “pick up and throw” as this is the action used to put the dumplings in the hot water. As they are made from blue fish, they are not pure white. 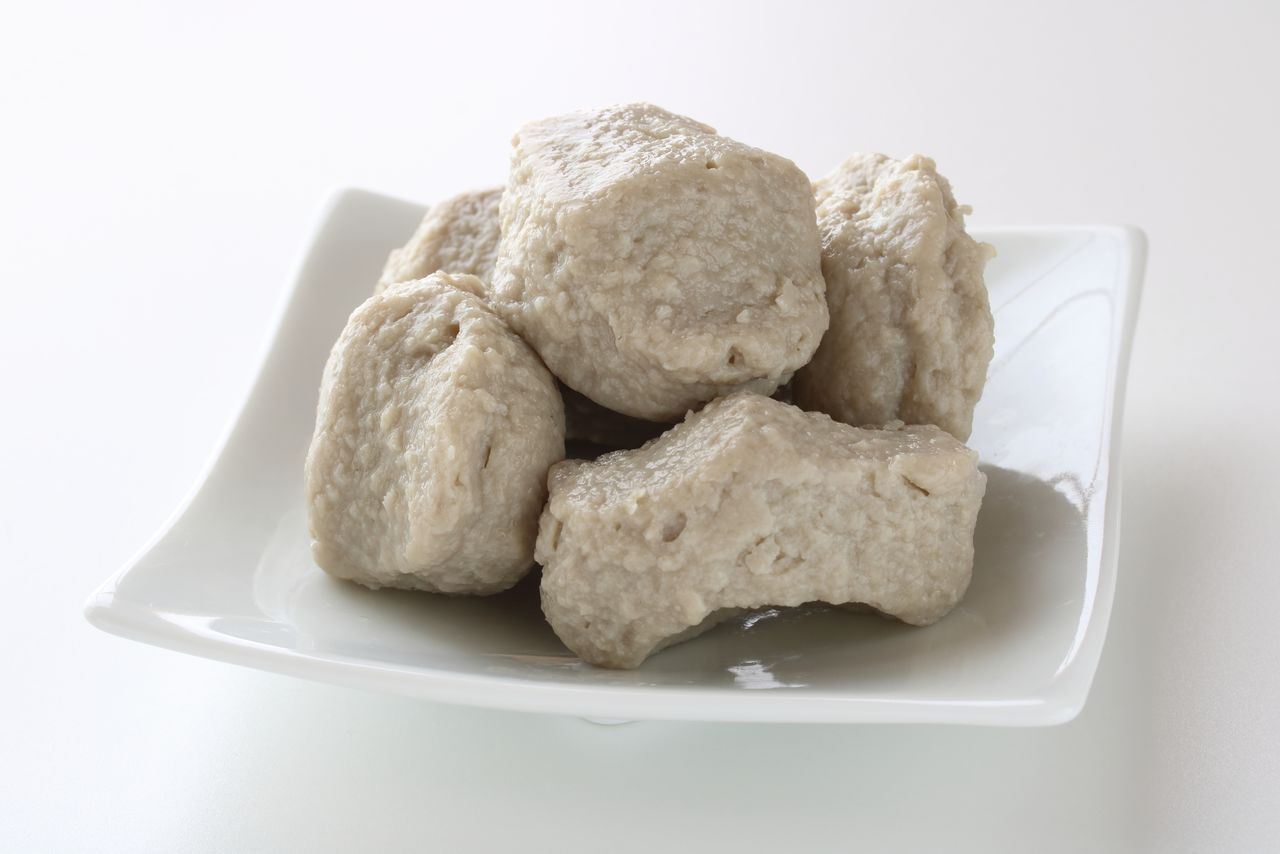 This is a standard item in osechi ryōri New Year cuisine. It is made by adding dashi (fish stock) and white fish surimi to beaten eggs (in some regions, prawn surimi is used). This mixture is baked and then rolled into shape using a makisu bamboo mat. The surimi gives it a chewy, fluffy texture that is different to the usual atsuyaki tamago (thick Japanese omelet). 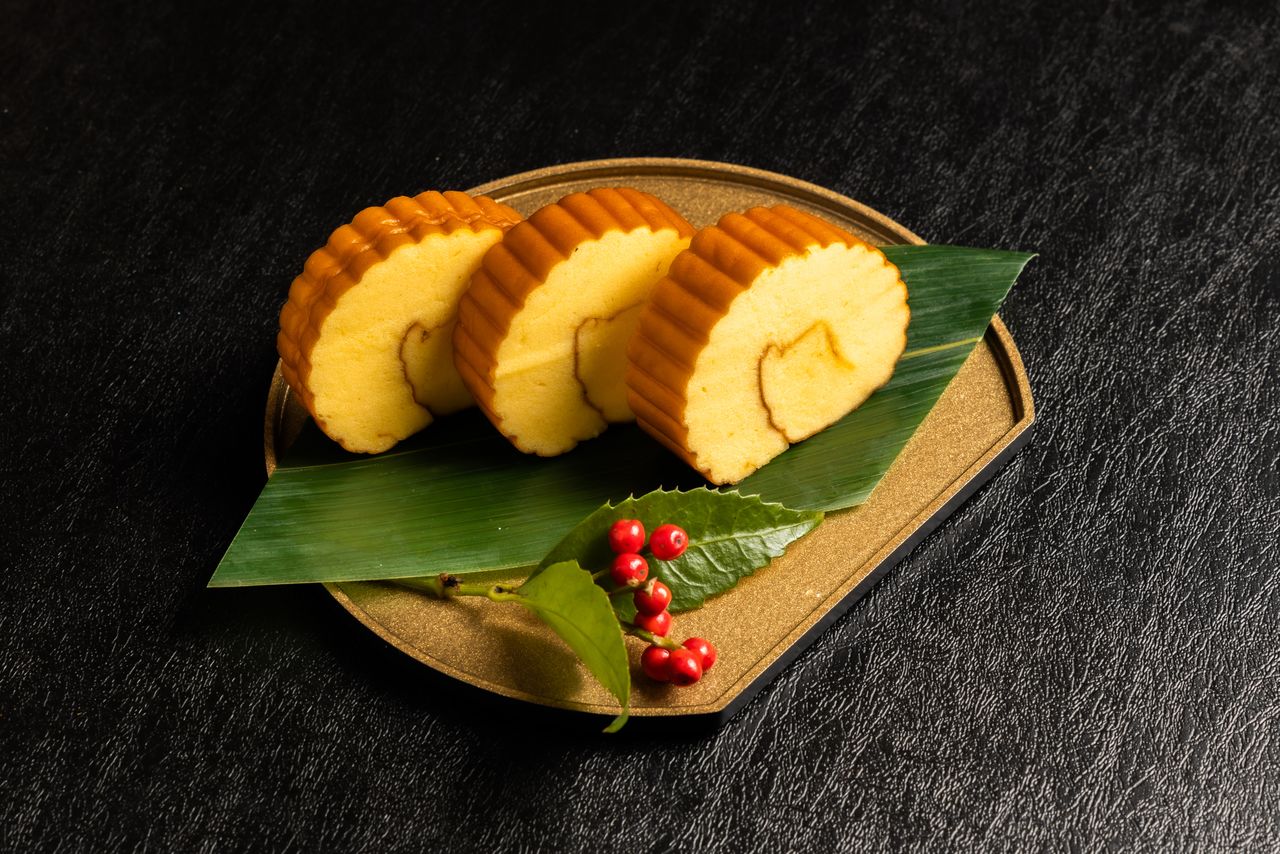 This is made by filling sausage-shaped packaging film with fish surimi, sealing it up, and then heating it. Oil and spices are added to give it a similar taste to Western-style sausages. 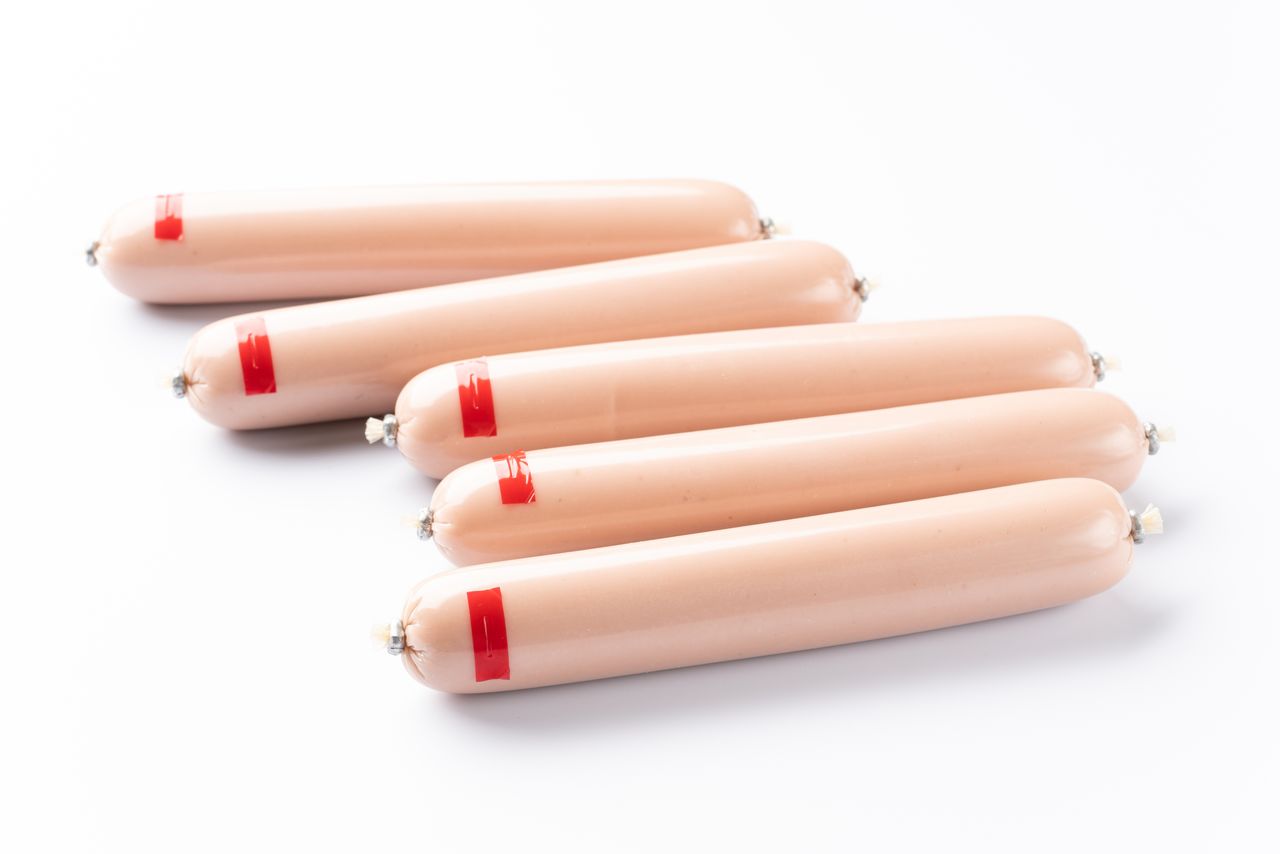 (Translated from Japanese. Banner photo: Oden, with its large variety of surimi items, could almost be classed as fish cuisine. © Pixta.)