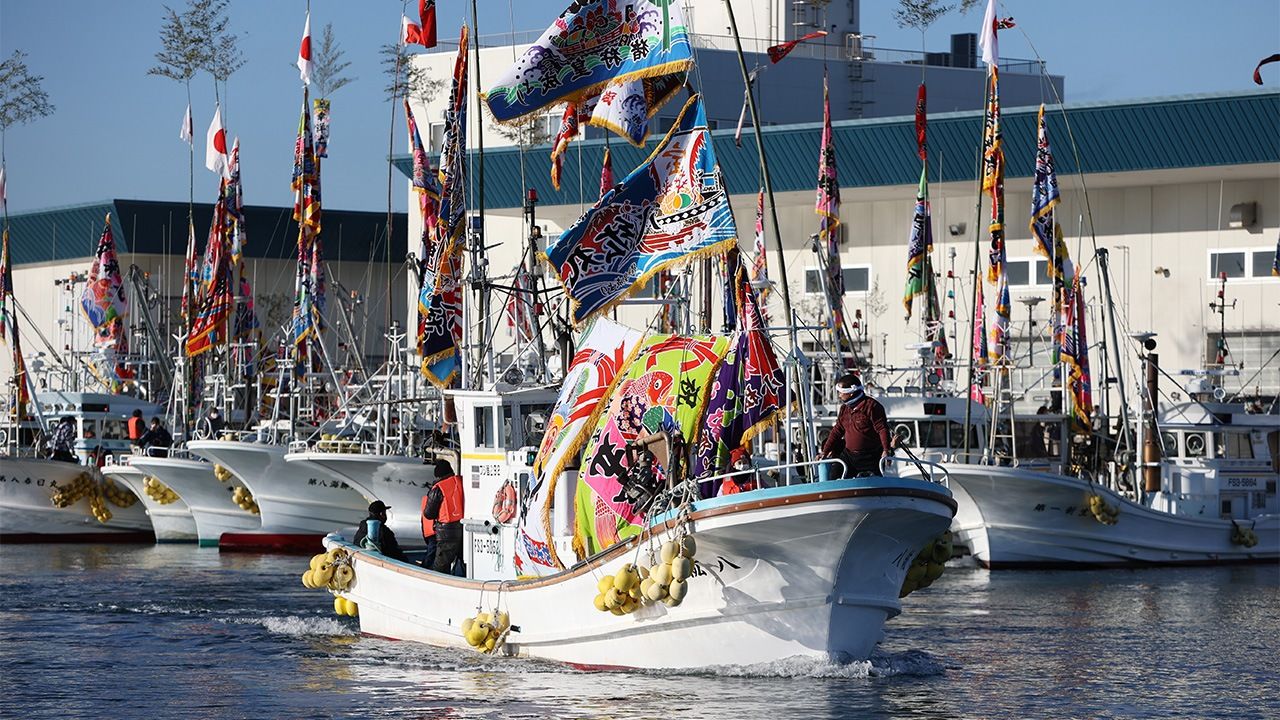 The State of Recovery in Tōhoku 11 Years after 3/11

Disaster Mar 10, 2022
We review data on recovery work in areas of the Tōhoku region affected by the triple disaster set in motion on March 11, 2011.

On March 11, 2011, the Great East Japan Earthquake shook large swaths of Japan, smashing the Tōhoku region’s Pacific coast with a massive tsunami and touching off a triple meltdown at the Fukushima Daiichi Nuclear Power Station. Below we look at the progress made in reconstructing shattered communities and economies in the region 11 years after the disaster.

The human toll of the triple disaster remains the most moving reminder of the devastation of 3/11. According to Reconstruction Agency data, the death count from the catastrophe stands at 19,747, including disaster-related fatalities from suicide and illness, with 2,556 individuals still unaccounted for. Although evacuee numbers have steadily declined over the last 11 years, as of February 2022, 38,139 people remain in temporary accommodations in Tōhoku, Kantō, and other regions. The majority, some 27,000 evacuees, are from Fukushima Prefecture, centering on communities near the crippled nuclear facility. There are also 3,400 evacuees from Miyagi Prefecture and 770 from Iwate Prefecture. 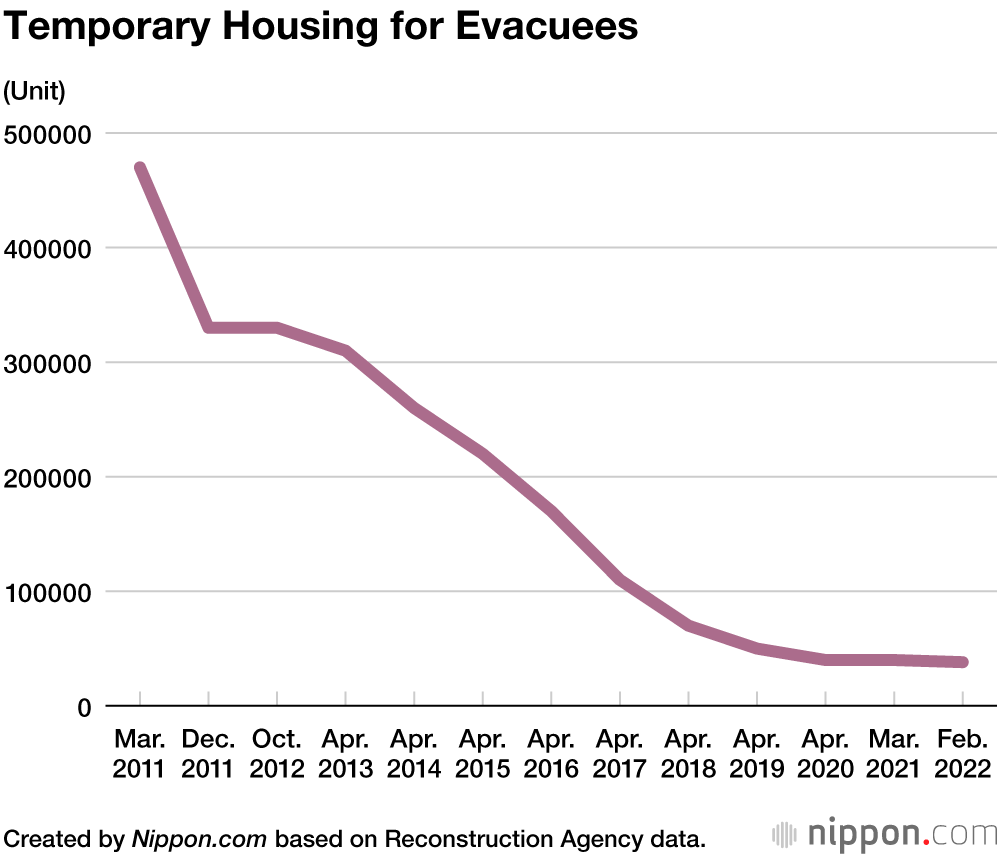 The majority of public housing projects for disaster victims, some 30,000 units of public housing and 18,000 elevated plots for private homes, have been completed. Reutilization projects on land abandoned after 3/11 have also made headway, but Reconstruction Agency data shows that a third of such public land remains unused, highlighting a new hurdle in the reconstruction process.

Work on transportation infrastructure is mostly complete, including the 359-kilometer Sanriku Expressway, which fully opened on December 18, 2021, linking Sendai in Miyagi with Hachinohe in Aomori Prefecture. Train service on the last disaster-hit section of the JR Jōban Line between Tomioka Station and Namie Station in Fukushima resumed in March 2020.

Nearly all farmland and seafood production facilities in tsunami-hit areas of Iwate, Miyagi, and Fukushima have been restored, and manufacturing output in the three prefectures returned to pre-disaster levels in 2019. While reconstruction of industrial infrastructure is complete, recovery of fisheries in Miyagi is still ongoing, with the 2019 catch of 210,700 tons of seafood being just two-thirds of what it was prior to 3/11.

Fukushima’s fisheries have made strides in restoring reputations damaged by safety concerns of catches and restrictions on where boats can operate. Trial fishing centering on bottom trawling along the coast was carried out until March 2021, and as catches were found to be safe, local fisheries are now preparing to increase output.

Decontamination work in communities near Fukushima Daiichi has progressed, although portions of six municipalities remain closed to habitation. Decommissioning of the plant’s reactors is moving forward slowly. 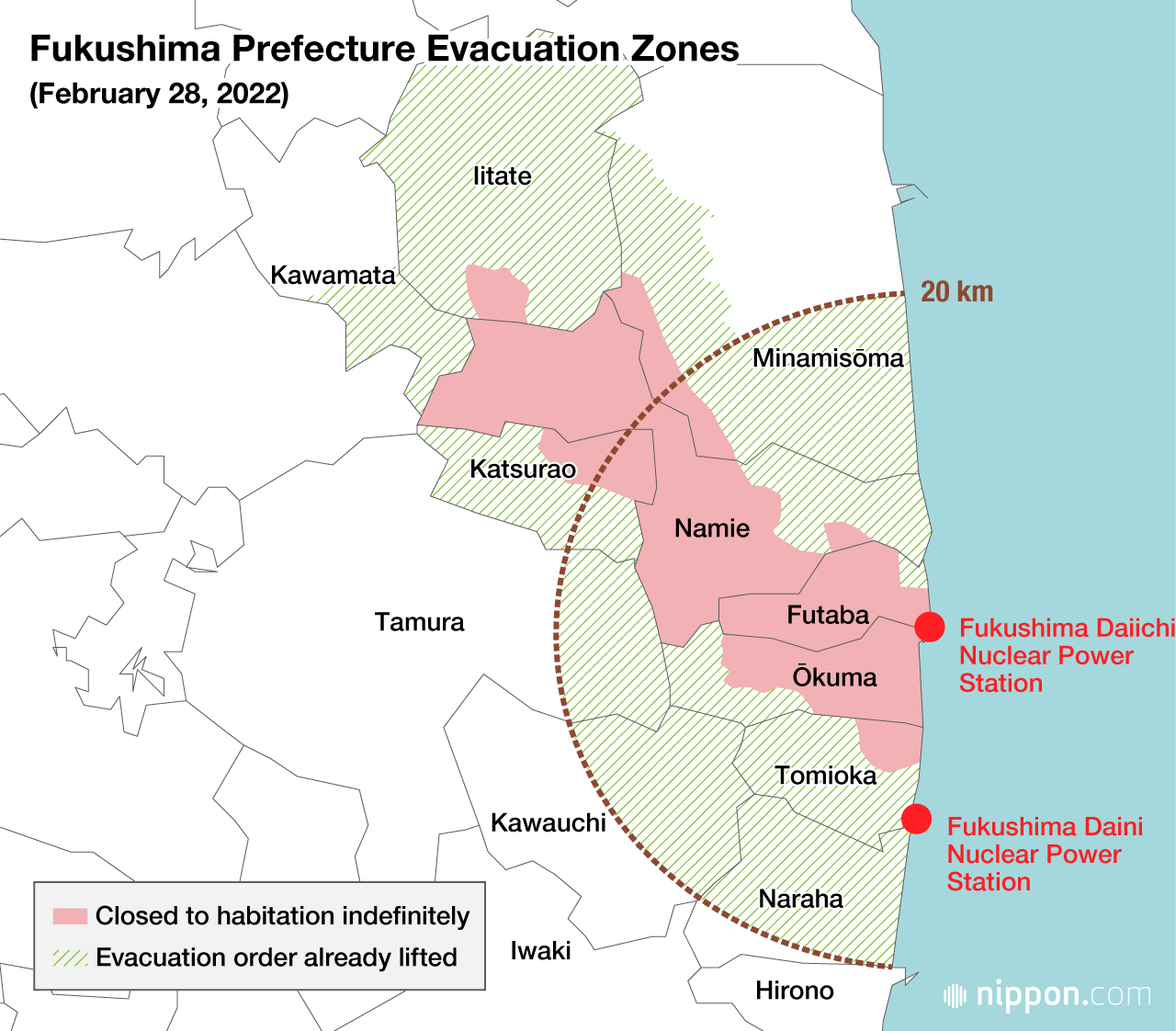 The government has ramped up decontamination and other reconstruction projects in special districts inside zones that are closed to habitation indefinitely, with the aim of allowing evacuees to return permanently starting in the first part of 2022. Authorities have relaxed restrictions in areas of Ōkuma and Namie, including allowing residents to stay overnight in their homes in preparation for evacuation orders to be lifted. However, only a handful of people have expressed interest in moving back.

Japan on April 13, 2021, announced it intends to discharge treated, low-level radioactive water from Fukushima Daiichi into the ocean starting in the first part of 2023. The plan has drawn sharp criticism at home and abroad, and is currently under review by the International Atomic Energy Agency.

Taiwan lifted its long-held ban on products from Fukushima, Ibaraki, Tochigi, Gunma, and Chiba Prefectures on February 1, 2022, finally reversing the strict policy it put in place in the wake of the Fukushima Daiichi accident. However, several economies, including China, still restrict imports of food from Fukushima and other areas due to concerns of radioactive contamination.

(Originally published in Japanese. Banner photo: Boats in Namie, Fukushima Prefecture, fly banners and other decorations during the Near Year to celebrate the first day of fishing on January 2, 2022. © Jiji.)