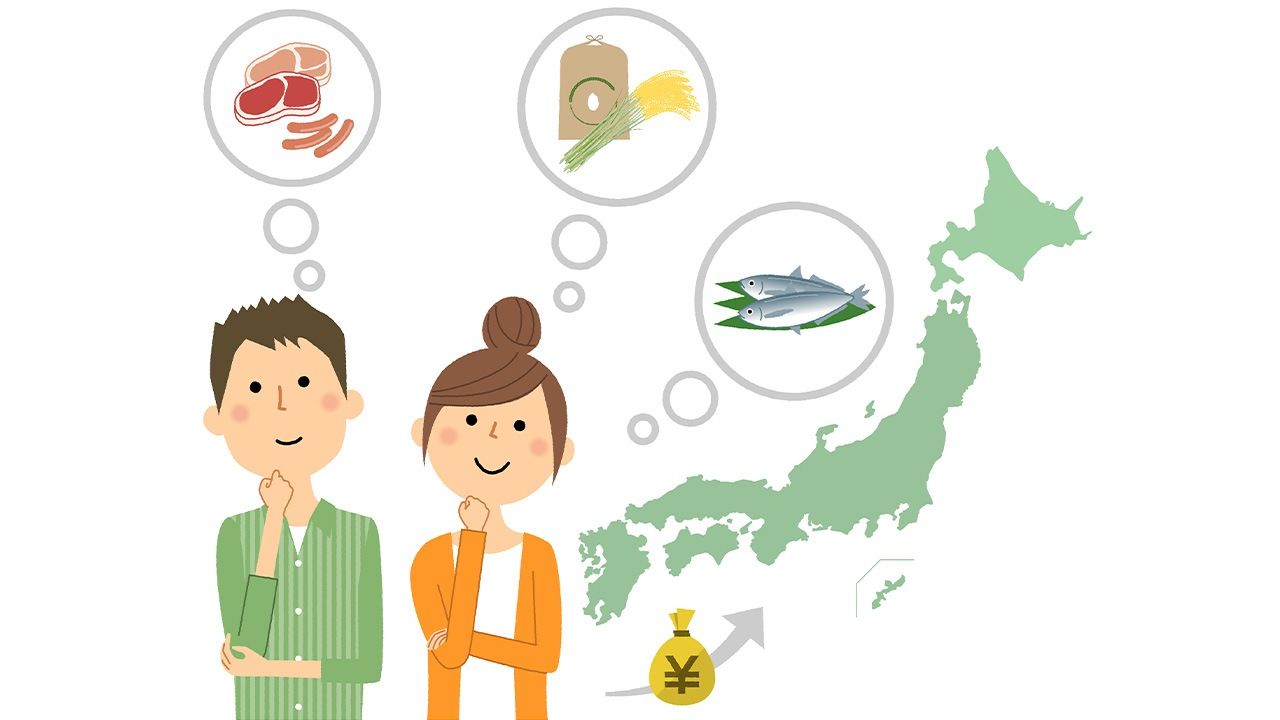 The Ministry of Internal Affairs and Communications reported that in fiscal 2021 the total revenue of Japan’s furusato nōzei system increased by 23% year-on-year to a record breaking ¥830.2 billion. The number of donations also reached a new high, rising by 27% to 47.8 million. It is thought that the steady demand from at-home “nesting” consumption during the COVID-19 pandemic has contributed to this increase.

Furusato nōzei is a tax donation system launched in 2008 to correct the imbalanced tax revenue between urban and rural areas. Taxpayers can get income and resident tax deductions up to the total amount donated, less ¥2,000, by making donations to a municipality of their choice. They also get gifts in return from the municipality. The system has gradually become popular as an efficient way to pay tax and shop.

For some time after being implemented, the total amount of donations stayed at around ¥10 billion. However, in fiscal 2015 there was a rapid increase in donations due to revisions made to the system, including raising the maximum limit of deductions and simplifying the declaration procedure. Since it generated revenue of ¥8.1 billion in its first year, the scale of the system has expanded more than 100-fold. 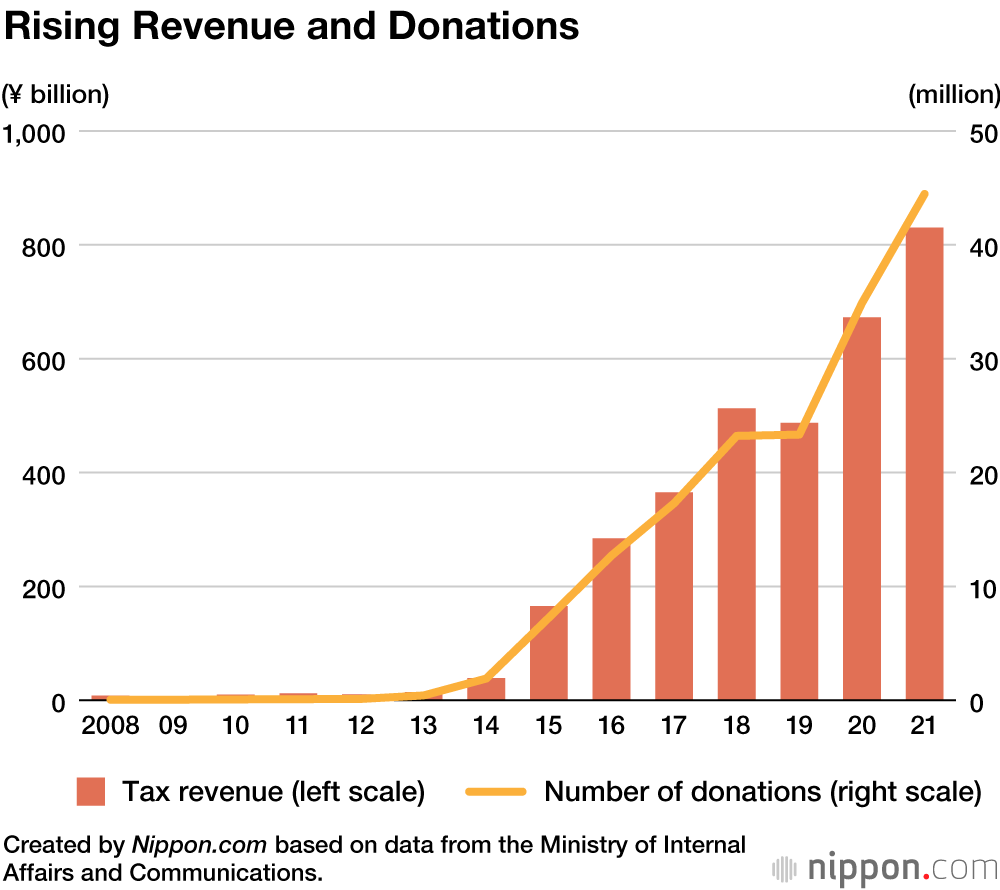 Monbetsu in Hokkaidō, which mainly reciprocates with scallops and crab, received the highest amount of donations with ¥15.3 billion. Miyakonojō in Miyazaki Prefecture, which gives pork and beef to donors, was the second highest followed by two further municipalities in Hokkaidō: Nemuro, which gives return goods like sea urchin and crab, and Shiranuka, providing salmon roe and salmon. Izumisano in Osaka Prefecture, offering beef and towels, also appeared in the top five. Municipalities that include luxury seafood and brand-name meat in their lineup of return gifts now regularly receive some of the highest donations and the original purpose of the system to let people who had moved to cities for education or work contribute to their hometown economies has been lost.

The reverse side to this is that the tax revenue loss, after deductions for people who have donated, rose to a record high of ¥567.2 billion in fiscal 2021. This equated to 7.4 million people eligible for tax deductions. The city with the largest loss was Yokohama with ¥23 billion, followed by the similarly large urban regions of Nagoya, Osaka, Kawasaki, and Setagaya in Tokyo. Some municipalities feeling the strain of this tax revenue loss are calling for a reform of the system.

Municipalities with the Highest Gains

Municipalities with the Highest Losses 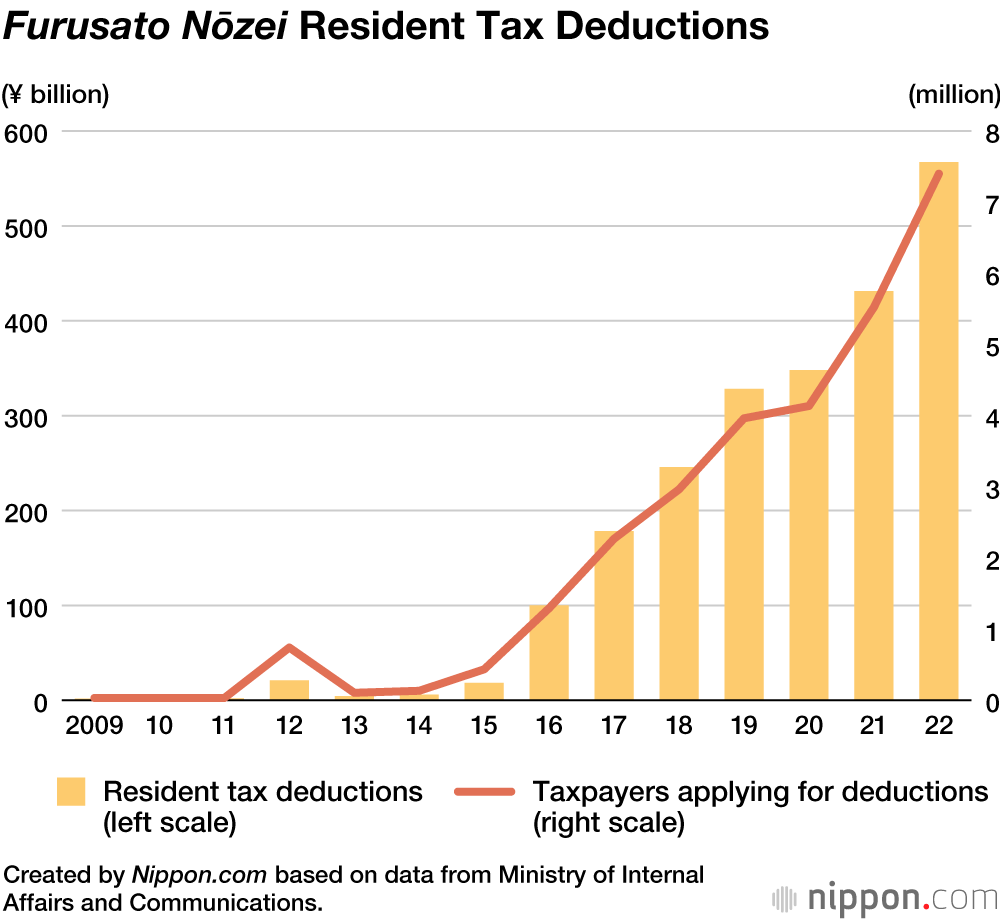