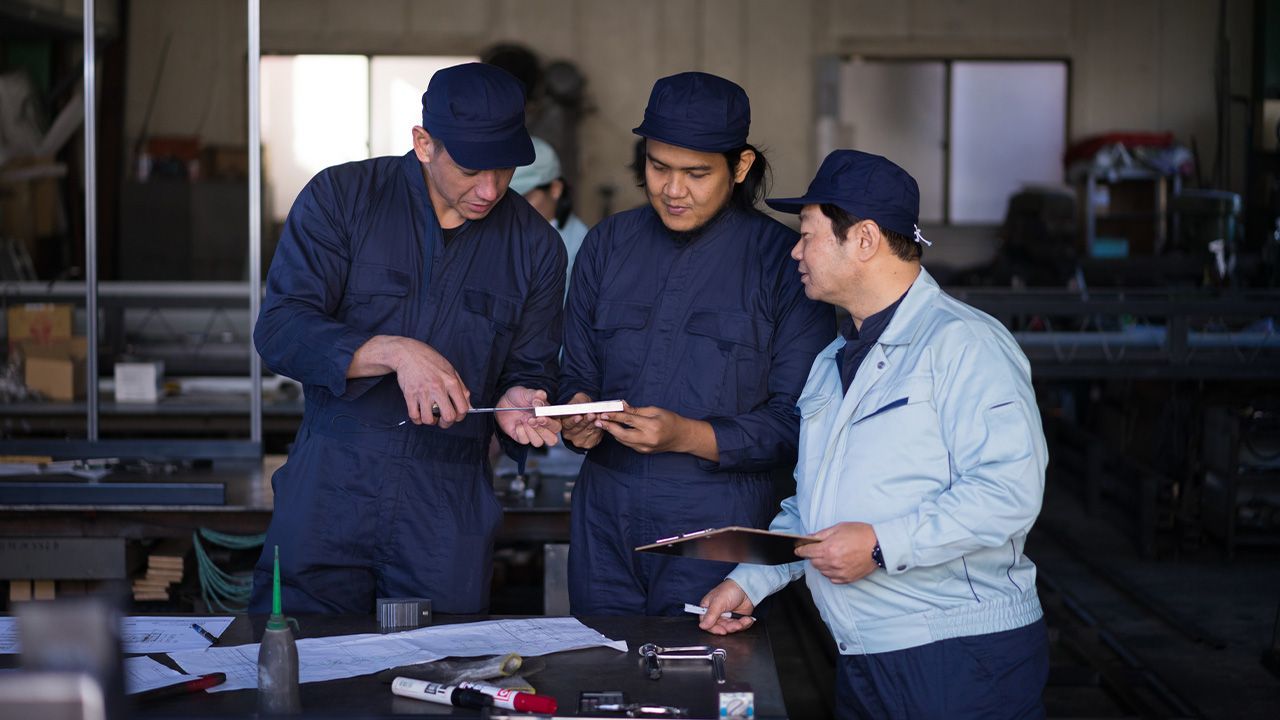 Half of Foreign Trainees Amassed Debts to Participate in Japan Program

Society Aug 26, 2022
A survey by the Ministry of Justice found that half of foreign trainees had gone into debt to come to Japan.

A recent survey by the Ministry of Justice’s Immigration Services Agency revealed that more than half of foreign trainees had accumulated debts, on average ¥550,000, in their own countries in order to come to Japan and participate in the technical intern training program.

Overall, 85% of respondents said they had paid some form of expenses to the intern program’s supervising organization in their own country before arriving in Japan and that average cost was ¥520,000. Approximately 10% had also paid fees to a separate intermediary.

The foreign technical intern training program, intended to allow overseas workers to learn skills while employed in Japan, has long been viewed as problematic, as it is known for low wages, long working hours, and repeated human rights violations. At a July 29 press conference, Minister of Justice Furukawa Yoshihisa indicated he is considering reforming the system, noting “it is quite right to say that there is a gap between its aim to make an international contribution and the reality of it acting to shore up the labor shortage.”

The survey was conducted over a five-month period from December 2021 through April 2022 and targeted approximately 2,200 interns from six countries: Vietnam, China, Indonesia, the Philippines, Myanmar, and Cambodia.

The results showed that 85.3% of trainees had paid some form of expenses to the training program’s supervising organization in their own country before coming to Japan. The total average calculated in Japanese yen was ¥521,000 and included dispatch fees, pre-training costs, guarantees, and contract breach penalties. By country, the highest average was for Vietnam with ¥656,000. The lowest was for the Philippines with ¥94,000. 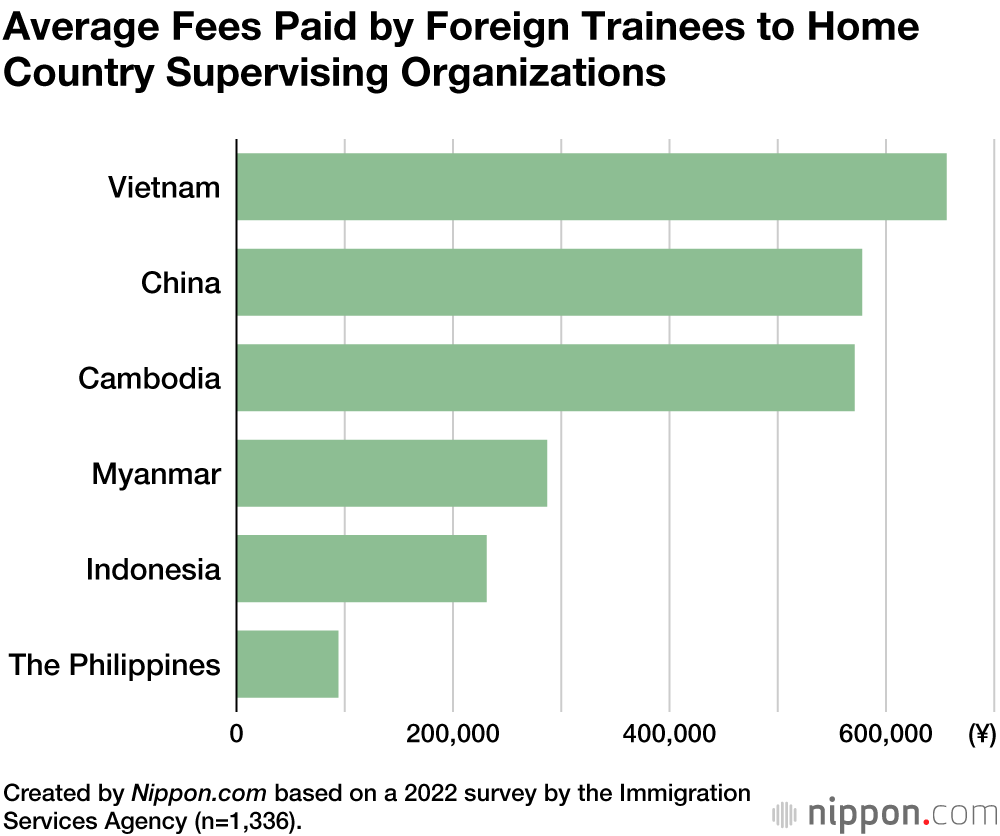 In the case of Vietnam, 11.5% of technical interns also paid expenses, including what were classed as “introduction fees,” to intermediaries separate to the training program’s supervising organizations, and on average those costs amounted to ¥447,000.

The survey also showed that 54.7% of trainees had accumulated debt in their home country before coming to Japan. Interns from Cambodia and Vietnam had the highest number of trainees in debt with 83.5% and 80.0%, respectively. 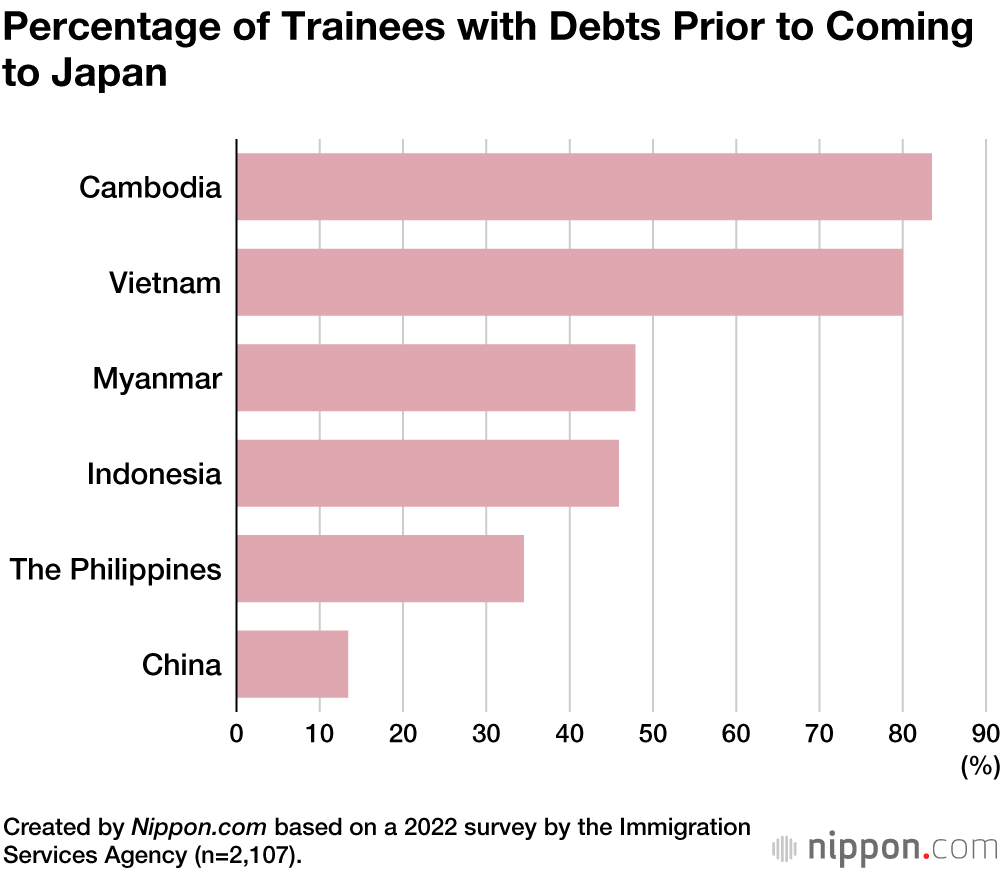