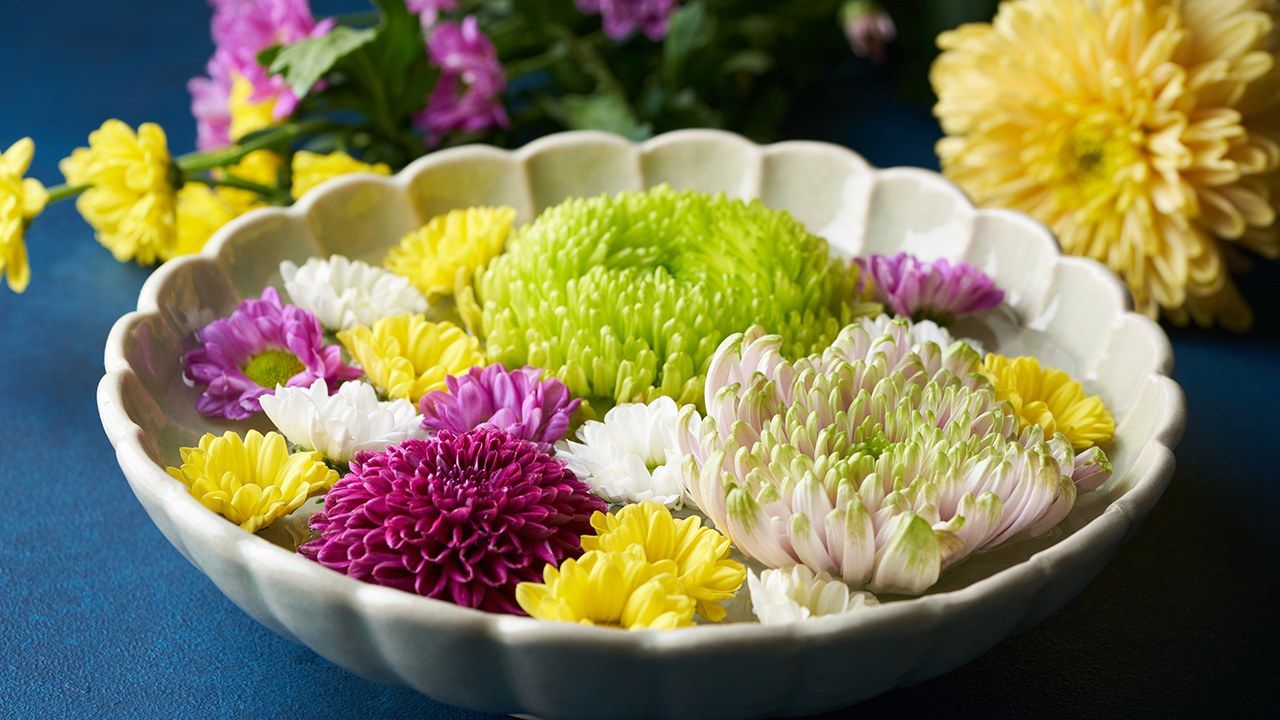 Culture Lifestyle Society Oct 24, 2022
The chrysanthemum in Japan represents fall and is often used as a floral offering or as a Buddhist flower. Its ornate bloom is also the emblem of the Imperial Family and appears on Japanese passports.

Chrysanthemums have been cultivated for medicinal and culinary purposes since ancient times in China and were brought to Japan in around the Heian period (794–1185). Chōyō-no-sekku (the Chrysanthemum Festival), one of the five sekku or seasonal festivals originally from China, is observed on September 9 and celebrates the medicinal properties of chrysanthemums in bringing good health and longevity.

In the early part of the Edo period (1603–1868), enthusiasm for cultivating the flower grew and a range of new varieties were developed. It also led to the custom of displaying chrysanthemums in elaborate ways, including neatly arranged in flower beds or in the shape of dolls. Toward the end of the Edo period and into the early Meiji period (1868–1912), these new types of chrysanthemums made their way to China and further on to Europe, sparking a major horticultural boom. 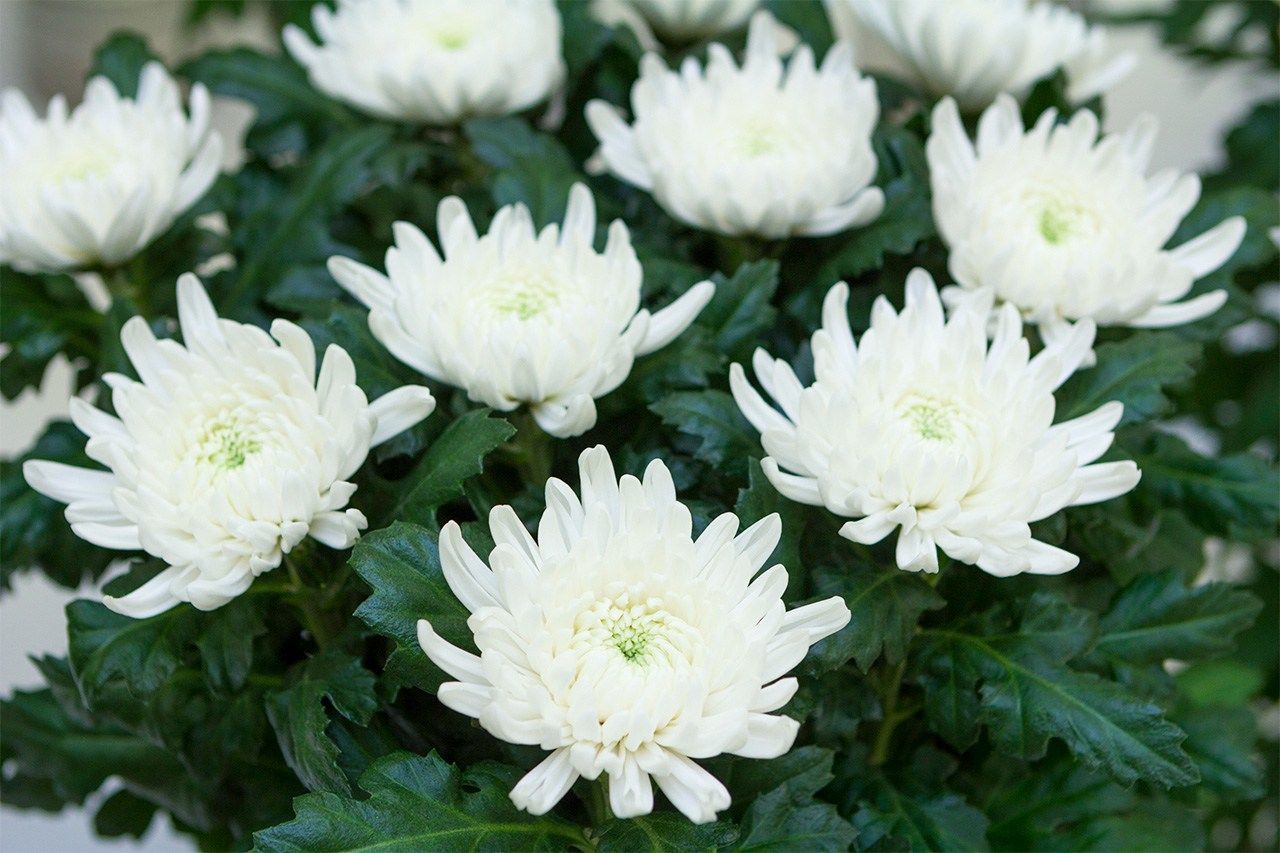 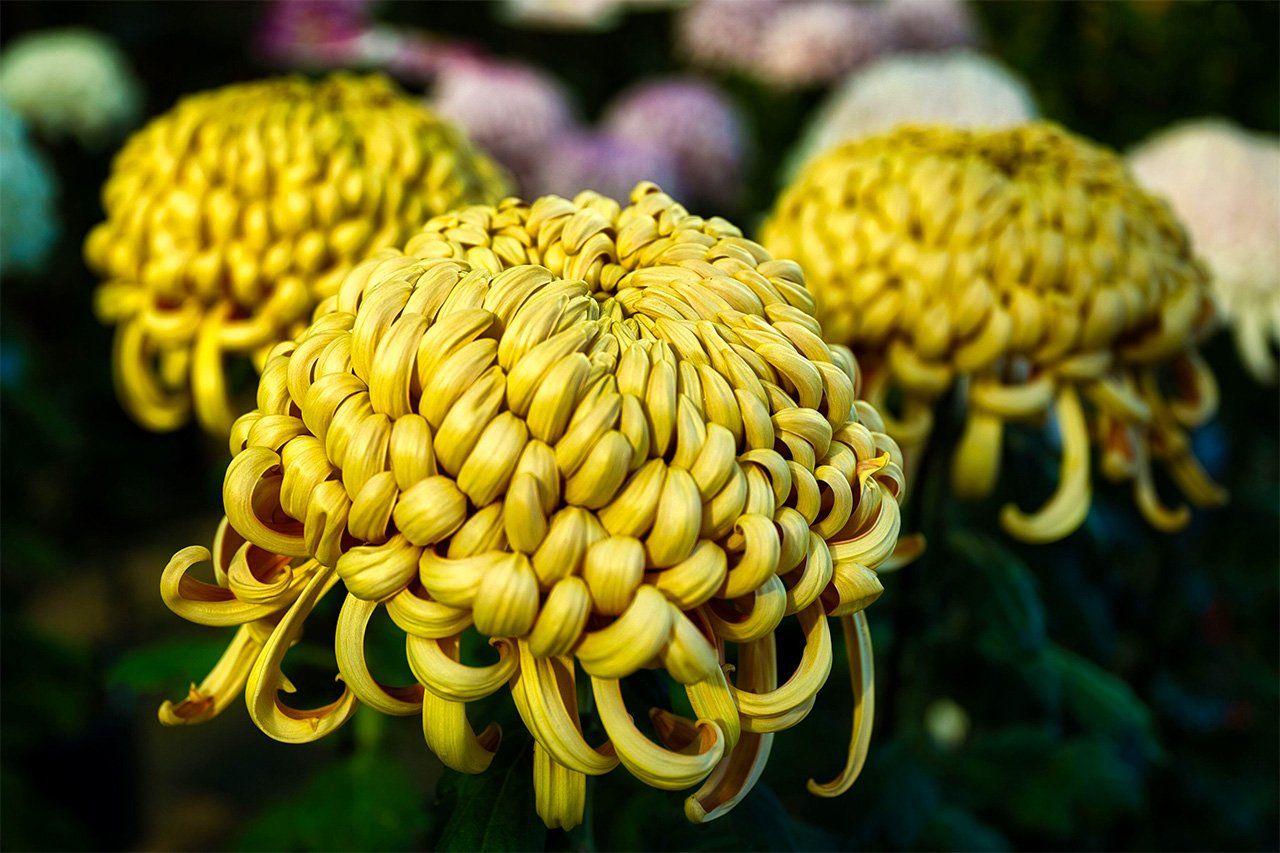 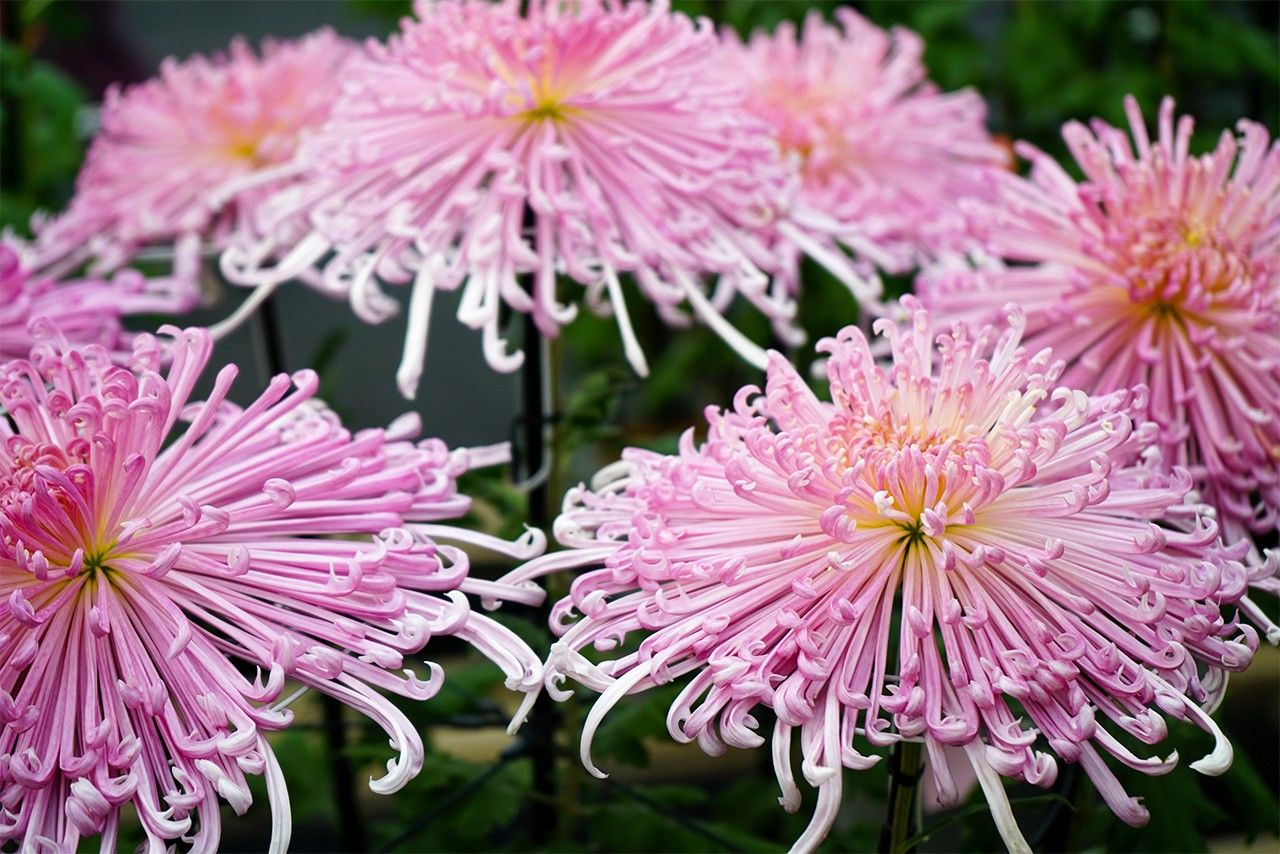 Kudamono have tubular petals that make blooms appear as if they have burst open. (© Pixta)

It is thought that the chrysanthemum was first adopted as the Imperial Family crest in the early Kamakura period (1185–1333) through the influence of Emperor Go-Toba (r. 1183–98), who liked the floral design and often used it. During the Meiji period, a crest using a chrysanthemum flower design with 16 double petals was established as the official Imperial Family crest and defined in detail as a diagram in the 1926 Imperial Household Ceremony Regulations. 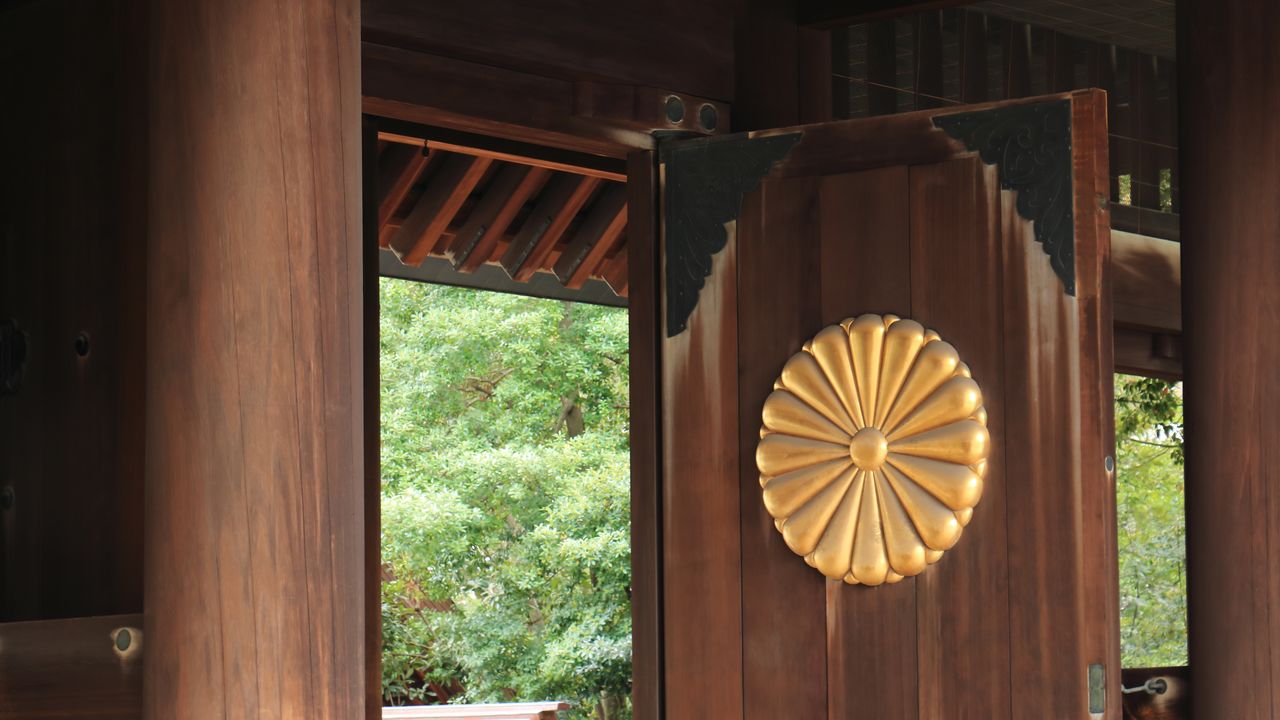 The large chrysanthemum crest on the gate of Yasukuni Shrine in Tokyo has a diameter of 150 centimeters. (© Pixta) 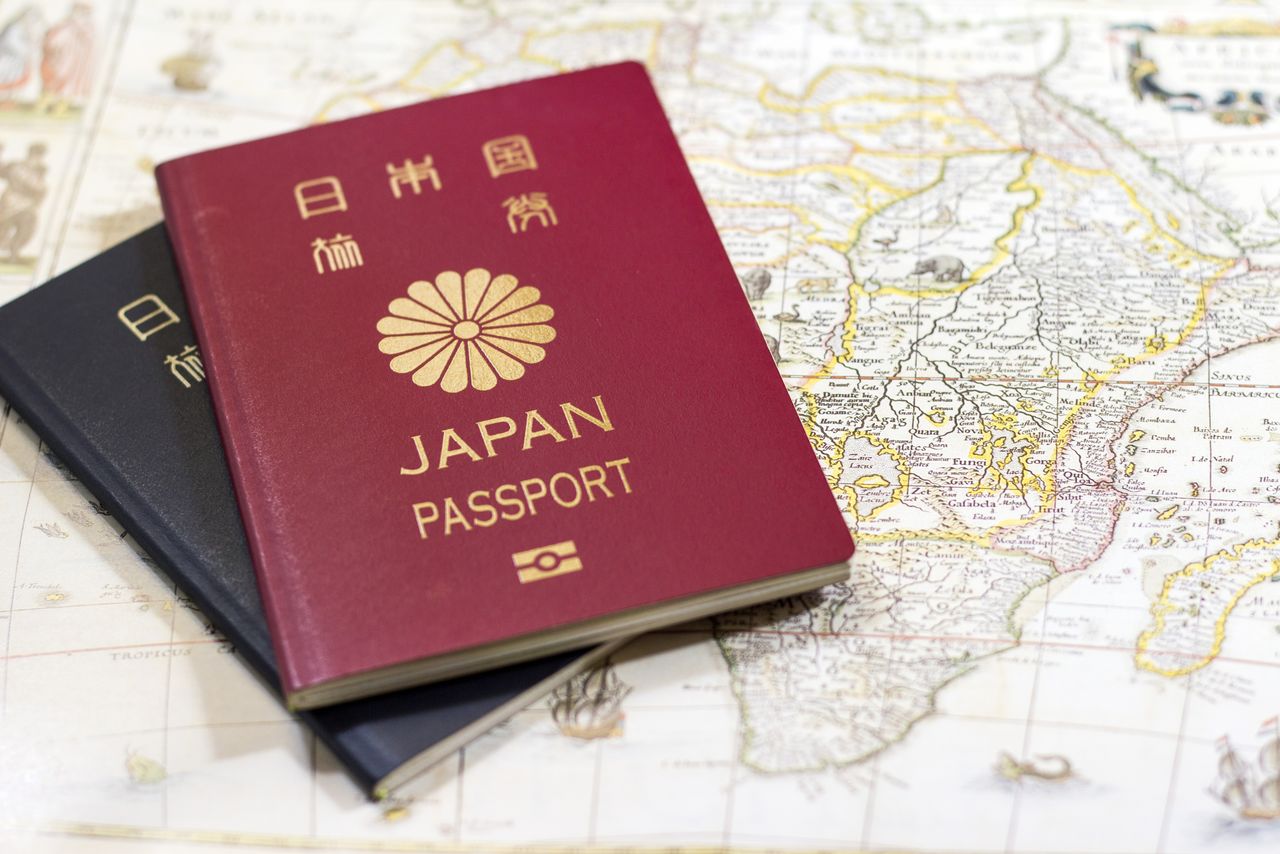 The chrysanthemum design on Japanese passports also has 16 petals. (© Pixta) 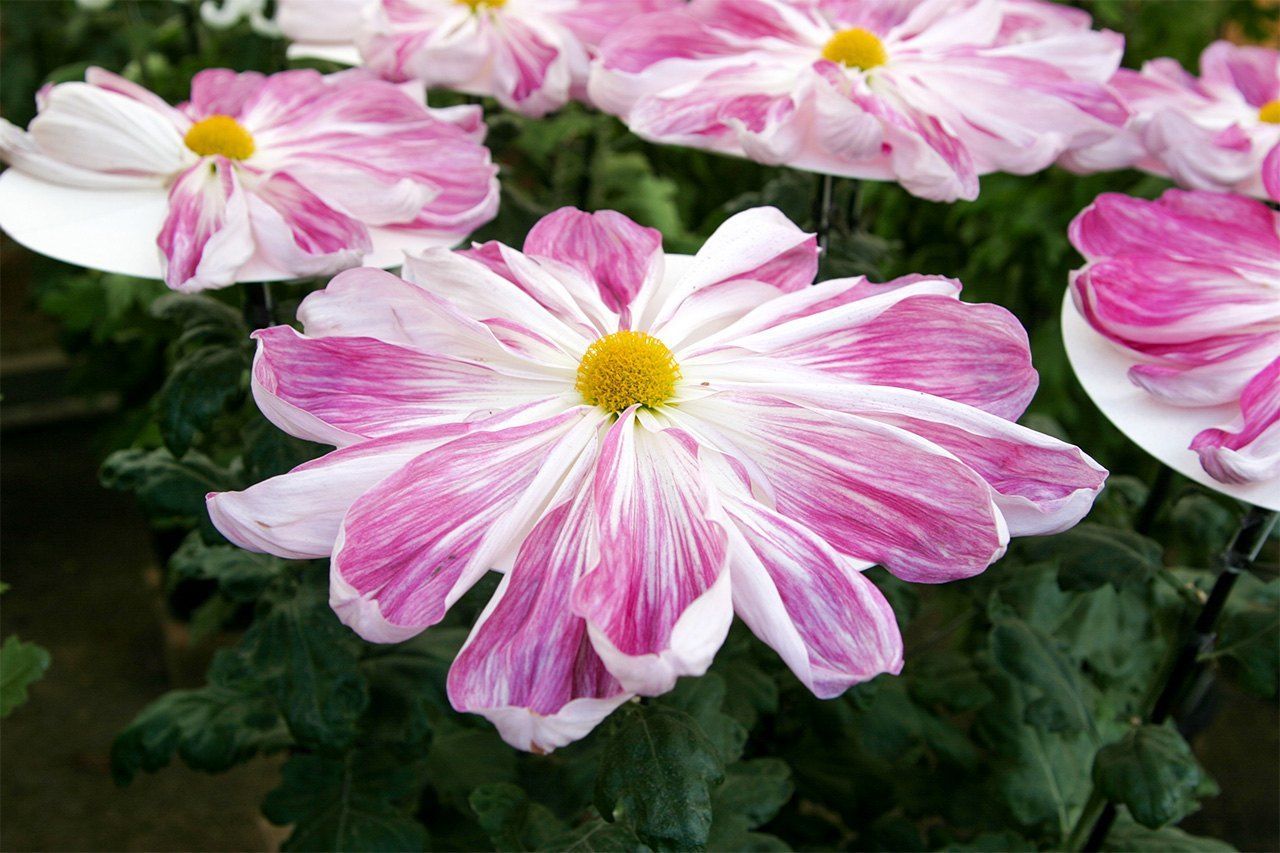 Ichimonji have flat blooms with hull-shaped petals. They are often called gomonshō-giku for their resemblance to the chrysanthemum of the Imperial Family crest. (© Pixta)

The chrysanthemum is also a well-known edible flower in Japan. The most common way to eat it is by steeping the blossom in hot water. The blooms have a characteristic subtle floral aroma, a bittersweet taste, and a crunchy texture. Yamagata Prefecture is famous for the variety enmeiraku, which is also known as mottenohoka. The shape is similar to the crest of the Imperial Family, and the name, meaning something like “What a shame,” is what the eater is expected to exclaim when devouring the blossom. 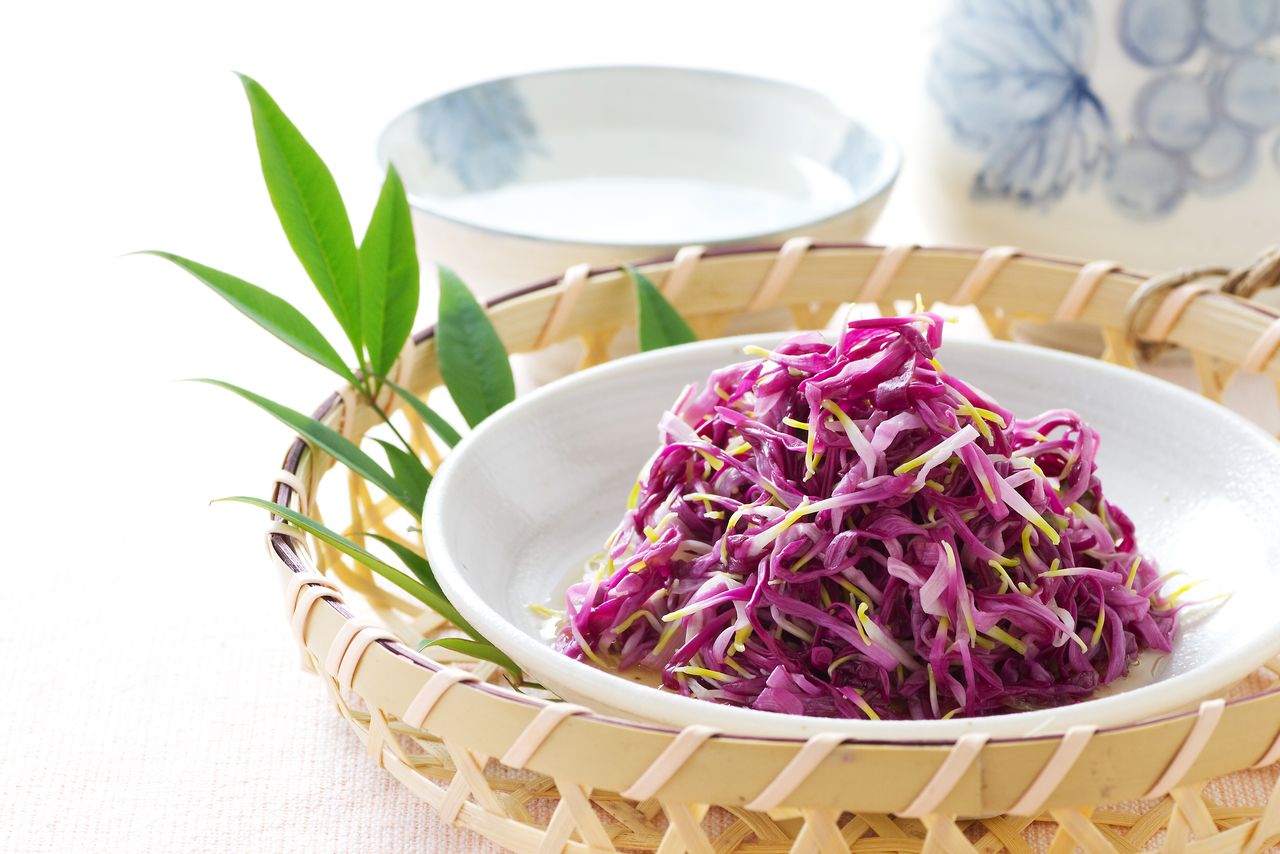 Kikka no ohitashi is a dish of blanched, vinegared chrysanthemum flowers. (© Pixta)

The small yellow chrysanthemum flowers that many people regard as just decoration to use for sashimi and other similar dishes are actually edible. However, they are not to be eaten whole. Instead, the petals should be detached, dipped in soy sauce, and eaten with sashimi, adding a gentle aroma and slight bitterness that compliments the flavor of the fish. 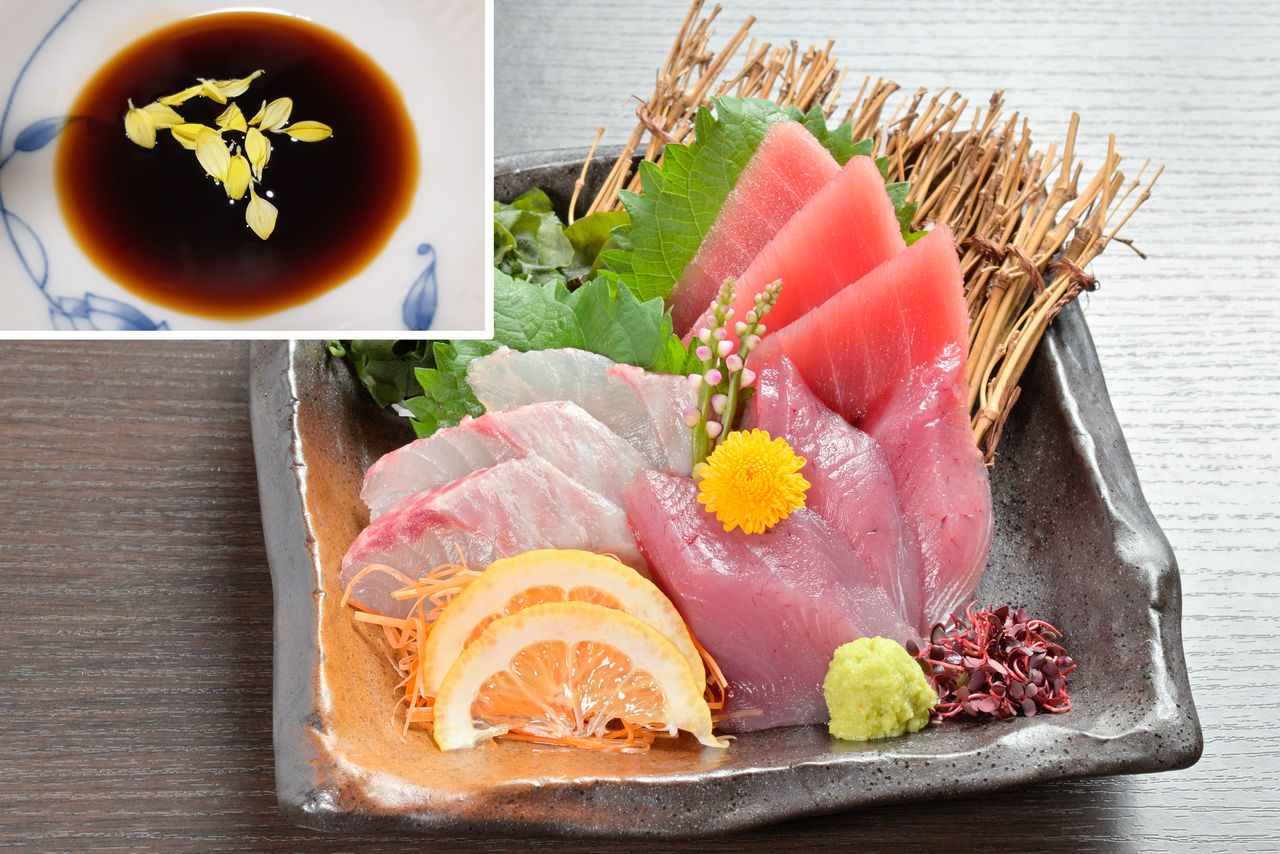 Small, edible chrysanthemum flowers are frequently used as a garnish for sashimi. (© Pixta)