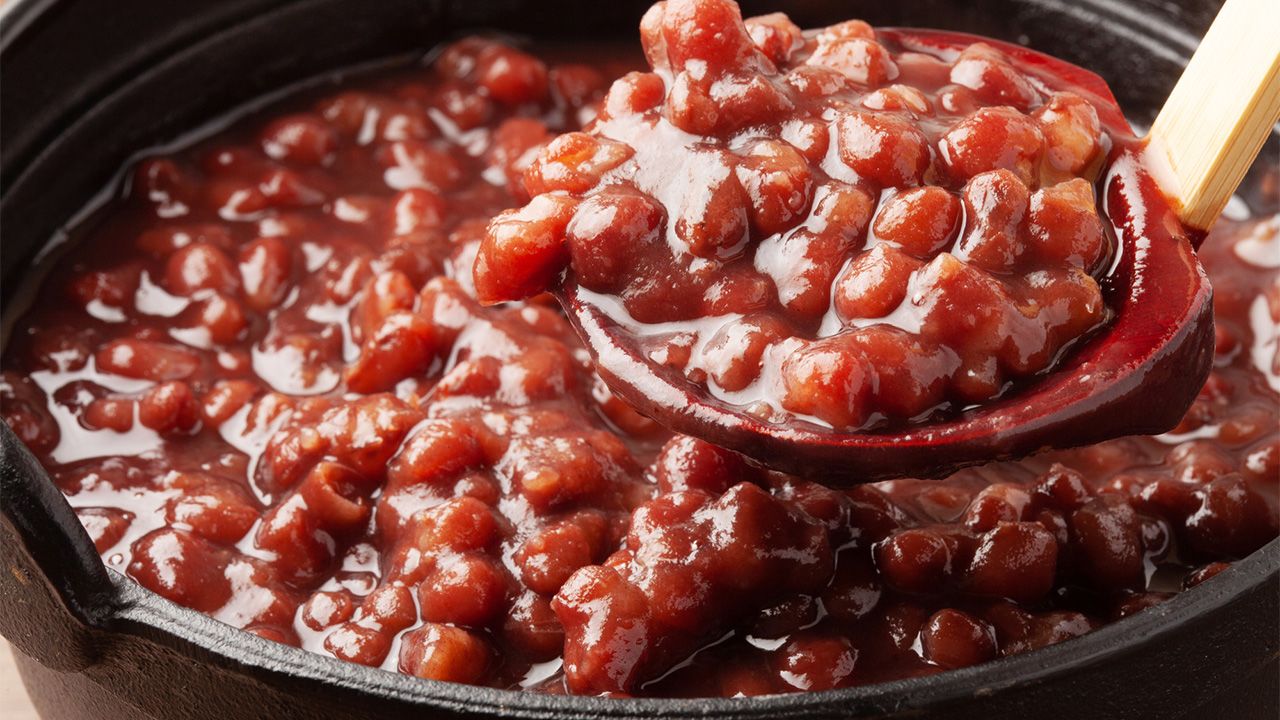 Food and Drink Culture Guide to Japan Feb 13, 2019
Bean paste, or an, is a popular sweet treat used to top and fill a wide variety of Japanese confections.

An is sweetened bean paste generally made from boiled azuki beans. Also known as anko, it is a key ingredient in a wide array of Japanese confections (wagashi) and Western-style snacks. Japanese affinity for an has made azuki Japan’s second-most consumed bean after soybeans.

From Azuki to An

The origins of an stretch back to the Heian period (794–1185), when travelers came from China with recipes for steamed buns made from wheat or rice flour. Known in Japanese as manjū, these were—and still are—stuffed with ingredients like meat and vegetables. However, Buddhist priests, who traditionally are vegetarian, swapped out fillings like pork and chicken for boiled azuki beans to create meat-free versions of these simple snacks.

Cooks first started sweetening bean paste during the Muromachi period (1333–1568). But only after Dutch traders began to regularly import sugar to Japan in the Edo period (1603–1868) did an-based Japanese confections, particularly those used in the tea ceremony, proliferate. Perfecting the art of making an was a monumental task, though, said to take a cook 10 years of constant training to accomplish. Things are easier today, with packages of mass-produced an commonly available at supermarkets. 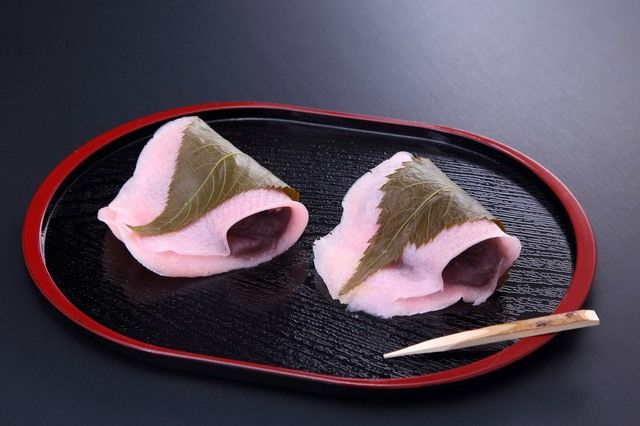 Filled with koshian, red bean paste pressed through a fine sieve, sakura mochi is typically enjoyed as part of the Doll Festival on March 3.

An Array of An

Bean paste is generally divided into sieved (koshian) and coarse (tsubuan) varieties. Along with azuki, an is also made from foods like chestnuts, kidney beans, and sweet potatoes. There are also types with added flavorings like ground sesame, yuzu, and miso. 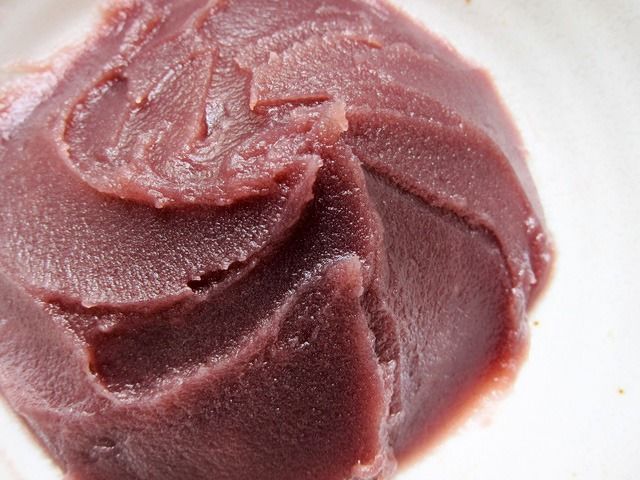 Below is a selection of common Japanese an-filled confections. 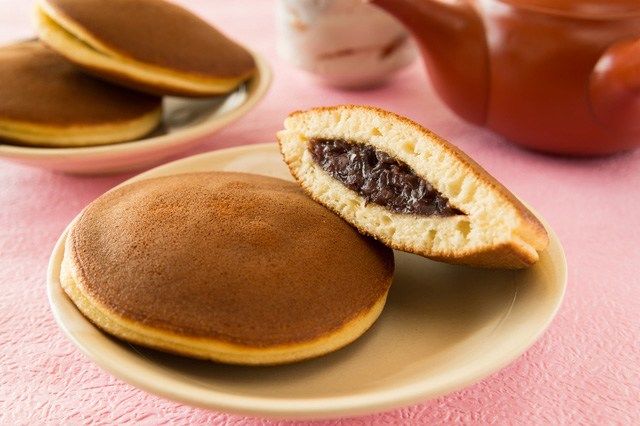 Dorayaki can be enjoyed with a cup of coffee, tea, or even milk.

Taiyaki: Another children’s favorite, these cakes are shaped like tai, or sea bream. Grilled in iron molds and overflowing with an, they are best enjoyed warm. Variations of the snack include the biscuit-like ōbanyaki, smaller kobanyaki, and doll-shaped ningyō-yaki. 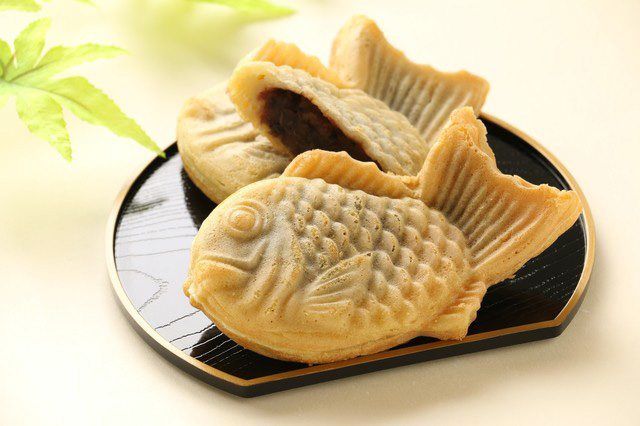 Sea-bream-shaped taiyaki are a treat for the eye and palate, and have long inspired debate between fans who prefer to take the first bite from the bean-filled head and those who start with the crunchier tail. 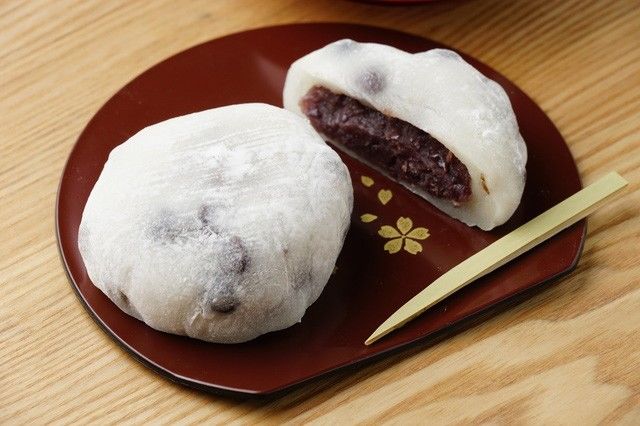 Mame daifuku with azuki blended into the outer mochi layer.

Kintsuba: This rich sweet is simply an covered by a thin layer of grilled batter. 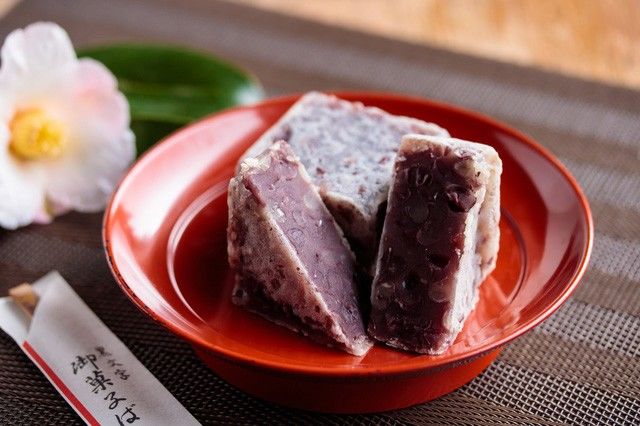 Kintsuba is an an-lover’s delight.

Monaka: This Japanese sweet is made from a light rice wafer and is found in a wide variety of shapes and sizes. 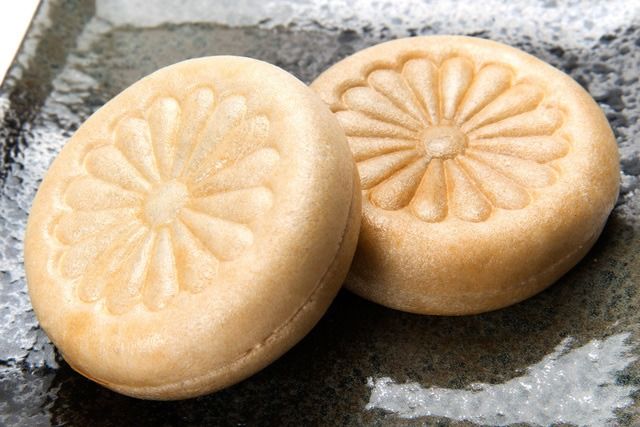 A monaka decorated with a chrysanthemum crest design. 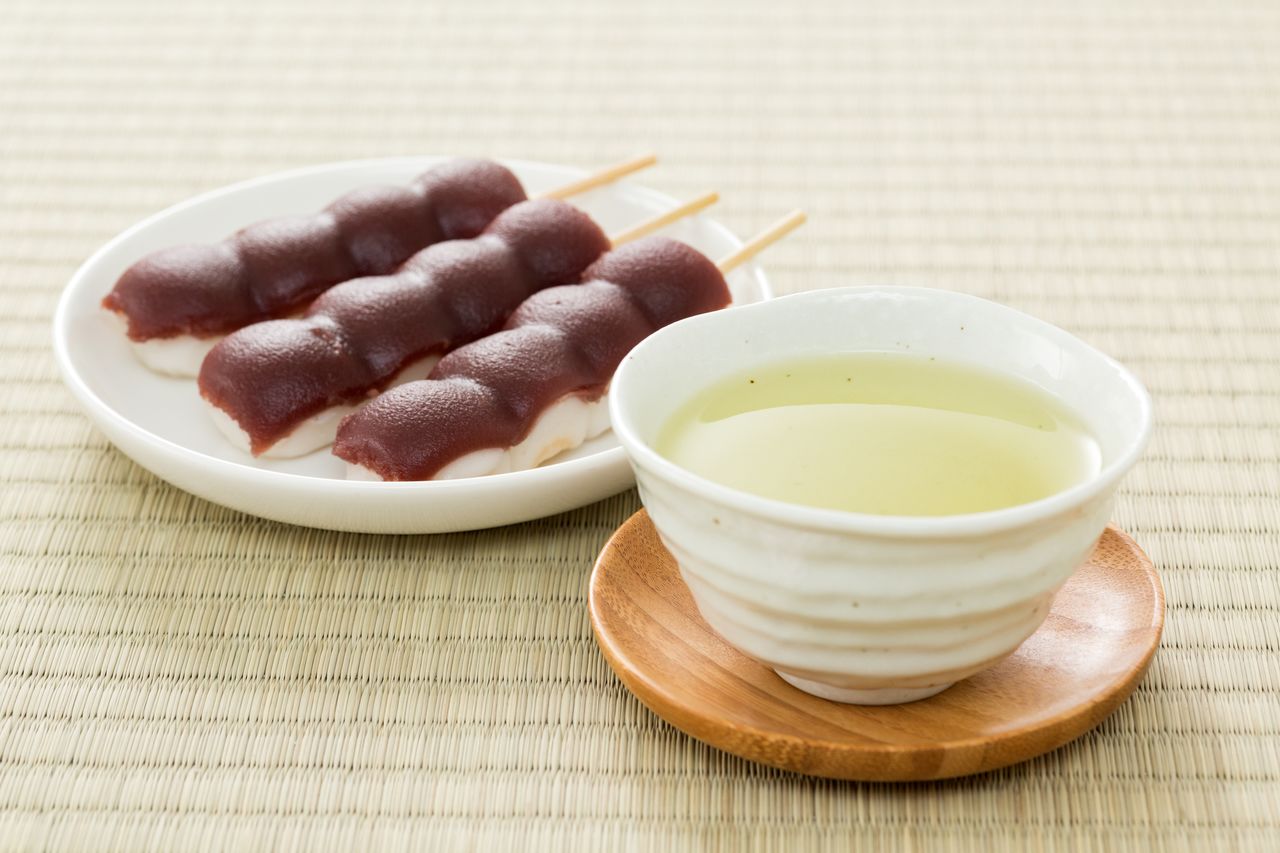 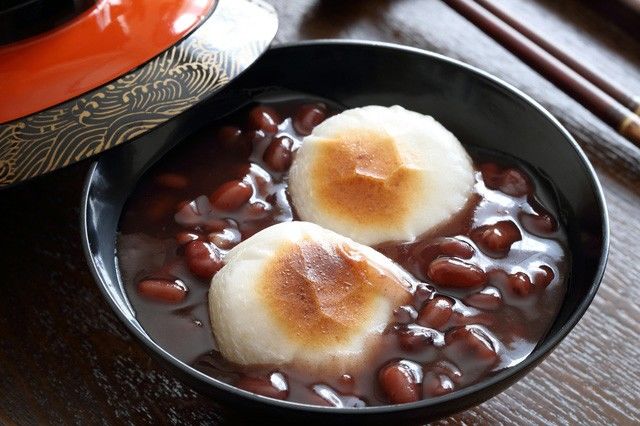 Shiruko, made with coarse an and grilled mochi rice cakes. 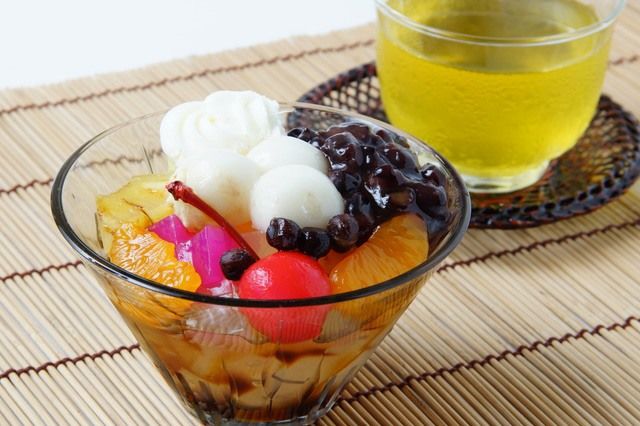 Anmitsu includes a tasty array of fruit like mandarin orange, pineapple, and maraschino cherry, as well as Japanese flavors such as kuromitsu syrup, shiratama dango and, of course, an. 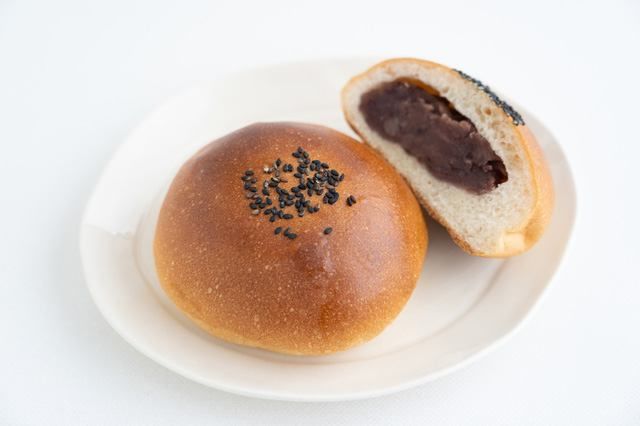 Anpan is a bread roll filled with bean paste. 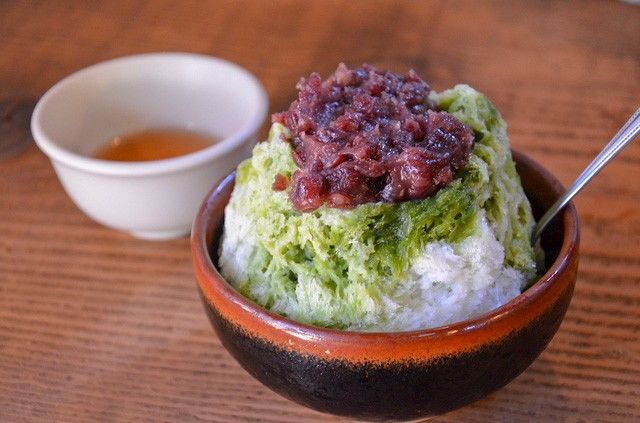 Ujikintoki shaved ice is made with coarse bean paste, matcha, and sugary syrup.

One unusual concoction is zunda, a type of an made from edamame, or pod soybeans. A traditional food from Miyagi Prefecture, it is the main ingredient of the brilliantly green rice-cake dish zunda mochi. 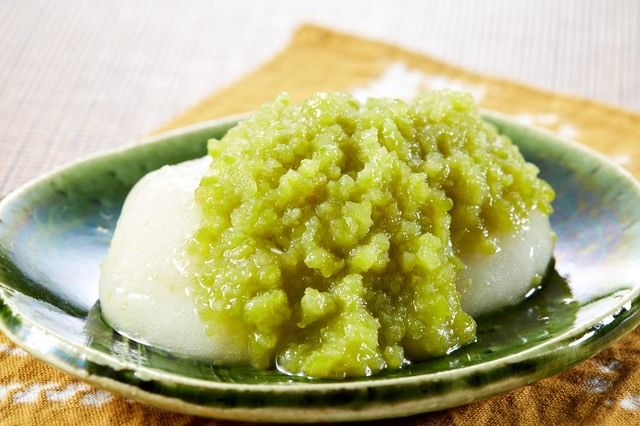 Ohagi is a traditional an-topped sweet typically enjoyed around the vernal and autumnal equinoxes—a week-long period called higan when relatives traditionally visit family graves. Also known as botamochi, ohagi is a simple dish made of glutenous rice smothered in bean paste. It is commonly placed as an offering at graves or Buddhist shrines in homes, and is equally relished by the living. 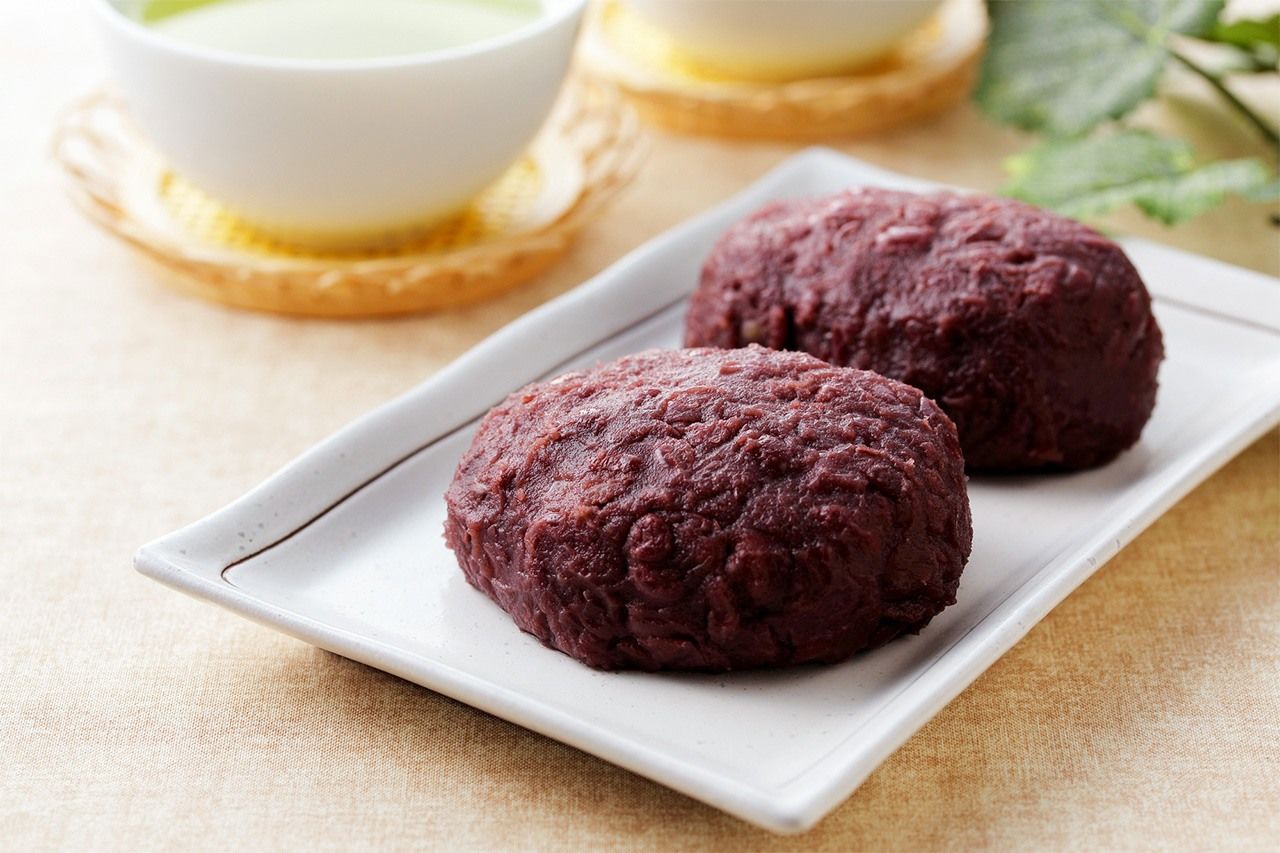 Ohagi is an old-style Japanese confection.

Bean paste is a wagashi standard that continues to shake up its traditional image, helping keep it a perennial favorite of sweet-toothed foodies.