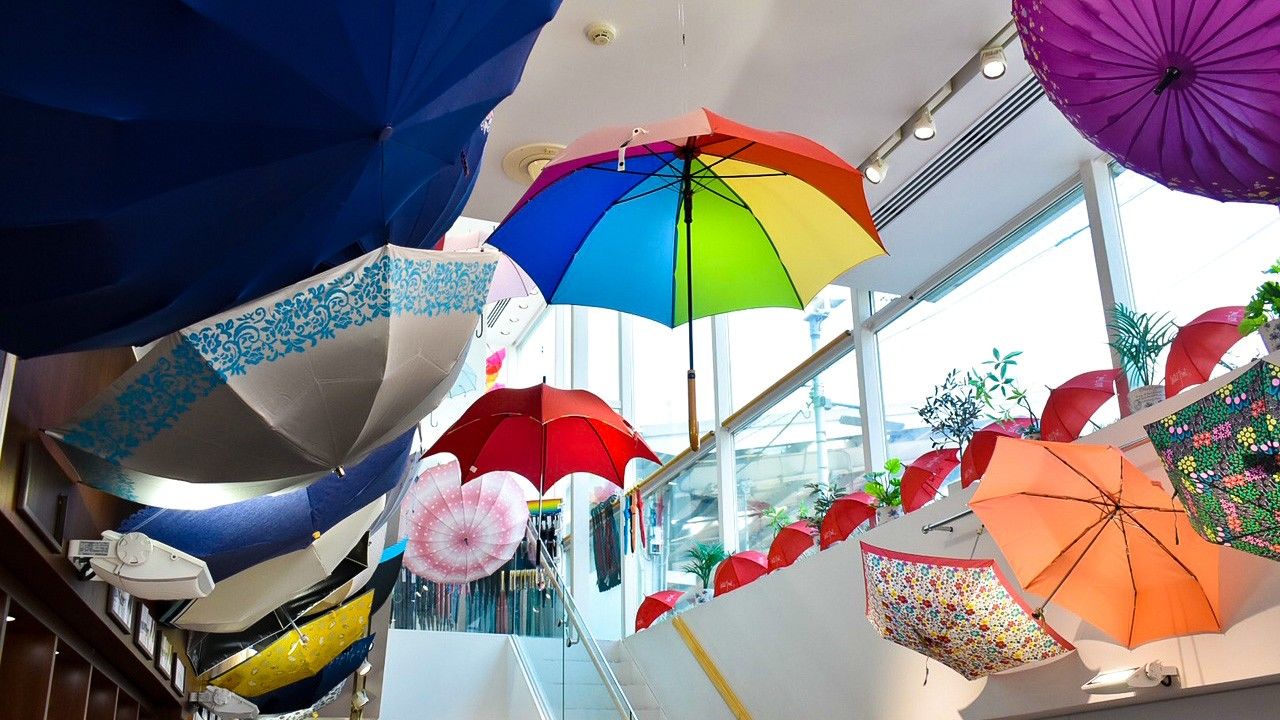 Umbrellas and Parasols in Japan

Lifestyle Culture Jun 10, 2022
From traditional umbrellas made with paper and bamboo to the clear, plastic umbrellas available at convenience stores, and beyond, we take a look at how Japan keeps off the rain and sun.

During Japan’s rainy season, many people never leave home without an umbrella. The humid period typically lasts from early June to mid-July, and is followed by the heat of high summer, in which the parasol becomes a common sight. In recent years, all-weather shades protecting against both rain and sun have become increasingly popular. 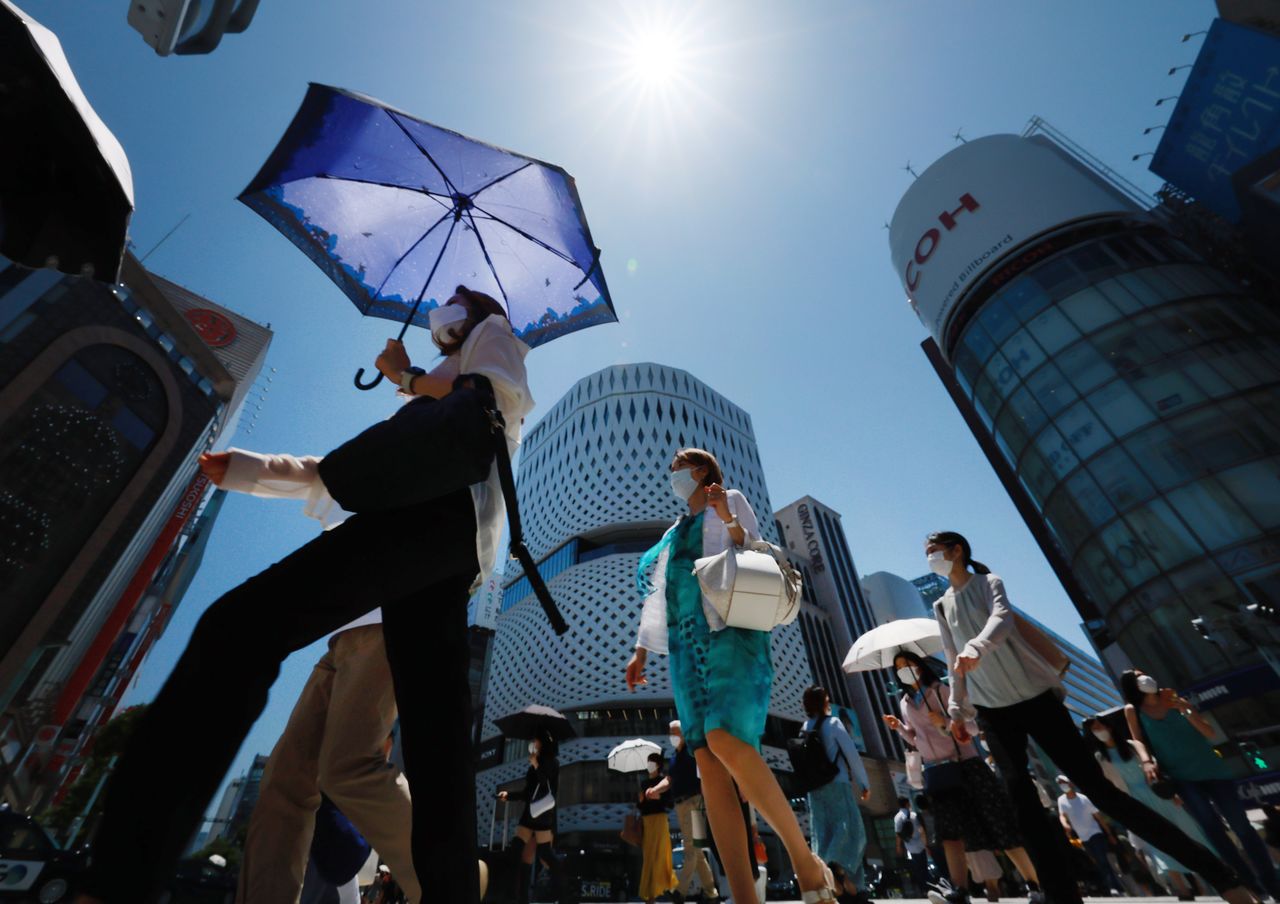 Shu’s Selection, a Japanese company known for its Waterfront umbrellas, is one of many market players pursuing advances in functionality and ease of use to win a share of the market. For example, there are folding umbrellas that open and close automatically or have easily collapsible folds or shape-memory functions. There are also umbrellas that are lighter than a mobile phone. Manufacturers focus on materials too, using fiberglass and stainless steel to boost durability and waterproofing so as to prevent hands from getting too wet when folding an umbrella up after use.

Demonstrating a folding umbrella that opens and closes automatically, with shape memory functions. 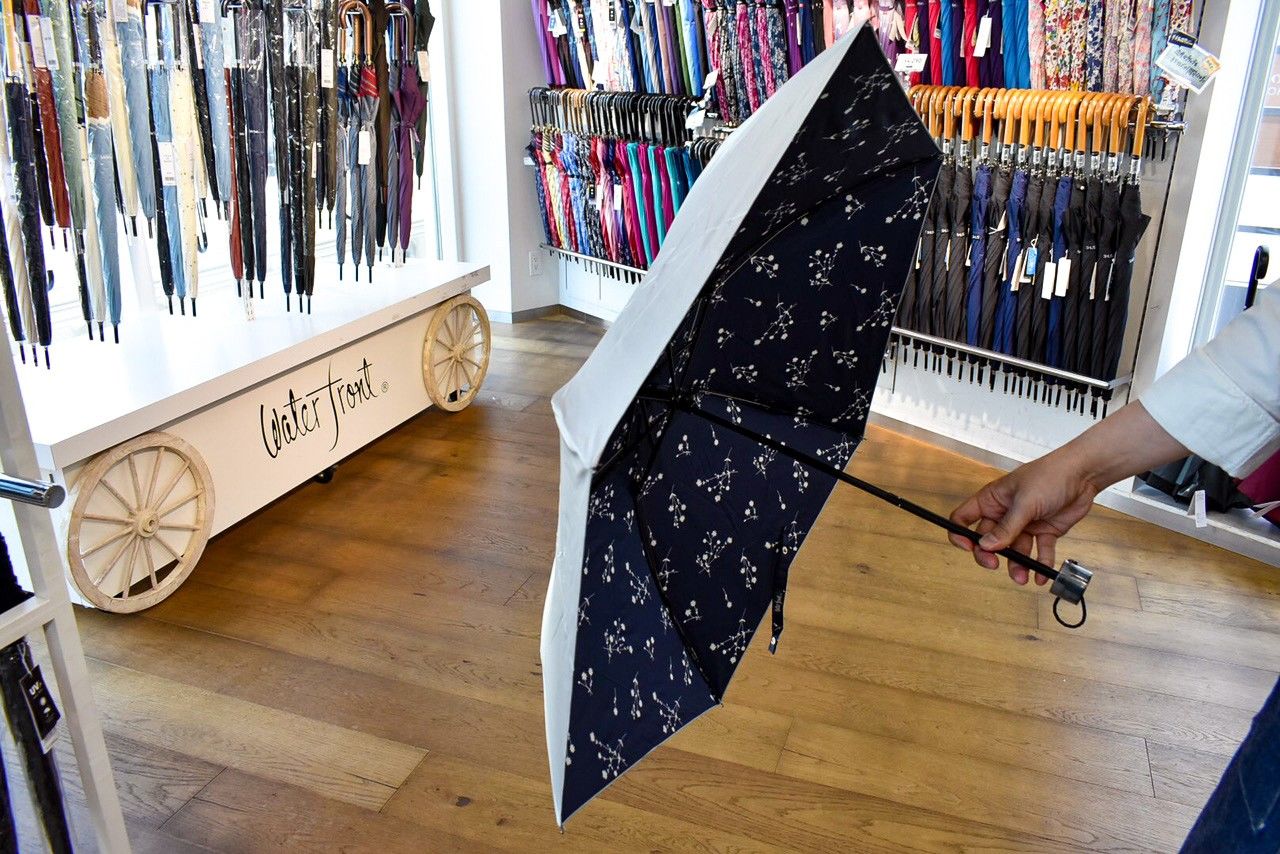 A silver coating provides added protection against heat and ultraviolet rays. When folded up the wet side goes inside, to prevent hands or bags from getting wet. 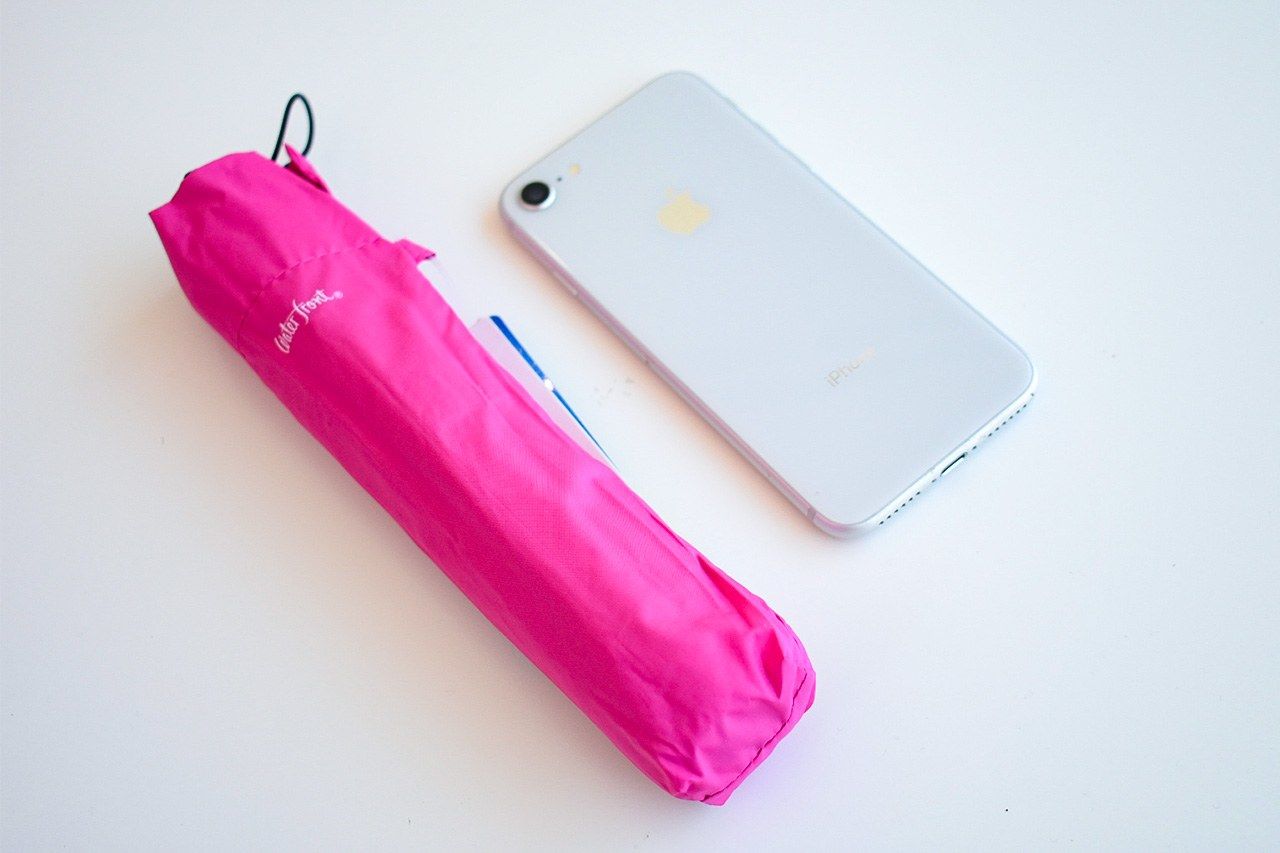 An umbrella weighing around 100 grams, less than a mobile phone.

Parasols that protect against more than 90% of ultraviolet rays have become standard. A black interior also improves the protection against heat, as well as guarding against rays passing through and reflecting off the ground into the user’s face.

While parasols were once high-end items sold mainly to women at department stores, lower prices have made them more appealing to young people. The Ministry of the Environment has recommended them to men too as a way of protecting against heatstroke, and more parasols for men have begun to go on sale. Some buyers have continued to follow fashion, making selections to suit different occasions, but in the last few years, there has also been a trend to choosing durable parasols with special features. 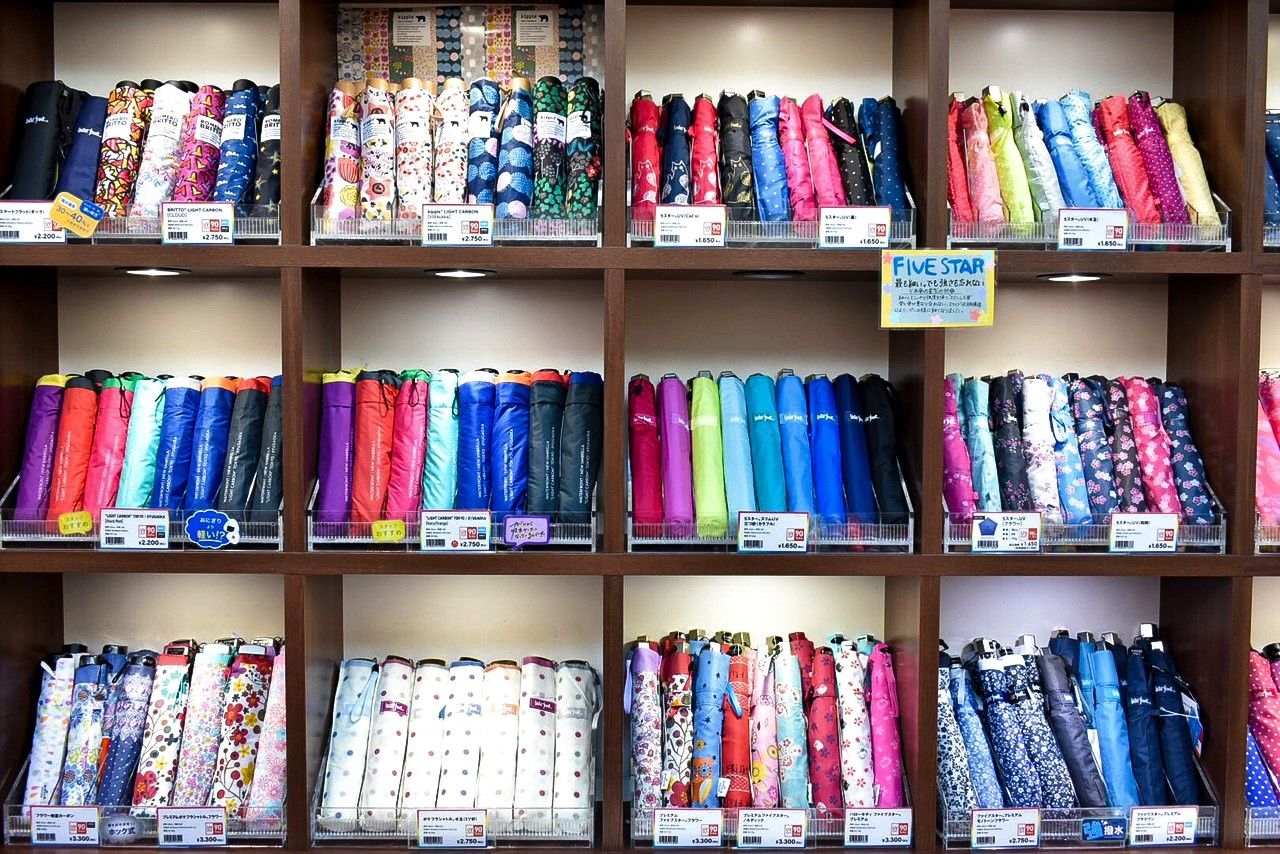 Umbrellas and parasols in various colors and designs.

According to a May 2022 survey by the meteorological company Weathernews, people in Japan own an average of 4.2 umbrellas each, rising to 4.9 for Tokyo residents. The most popular variety was a straight, or noncollapsible, umbrella (not plastic) at 47%, followed by a plastic umbrella at 26% and a folding umbrella at 21%. The straight umbrella was used by 39% of men and 62% of women, with the latter saying that they chose this type because they wanted to look stylish or lift their mood on a rainy day.

While there are competing theories as to when umbrellas were first used in Japan, they appear in picture scrolls from the Kamakura period (1185–1333). By the Muromachi period (1333–1568), they were typically made of washi paper over bamboo frames, with oil painted on to provide waterproofing. According to Tsujikura of Kyoto, which has been manufacturing and selling traditional Japanese-style umbrellas since its foundation in 1690, the shades became popular nationwide in the Edo period (1603–1868), but quickly fell out of fashion in the late 1880s due to the appearance of Western-style umbrellas. These were more durable, lighter, and cheaper, as well as matching better with Western clothing.

In 1958, innovation came in Japan, as the manufacturer White Rose, headquartered in Tokyo’s Asakusa, produced the world’s first plastic umbrella. With the 1964 Olympics in Tokyo, Japan’s clear, plastic umbrellas drew worldwide attention. Once expensive, they now typically retail for around ¥500 to ¥1,000 in convenience stores, although there are pricier items with advanced features, as well as low-end versions available in ¥100 stores. 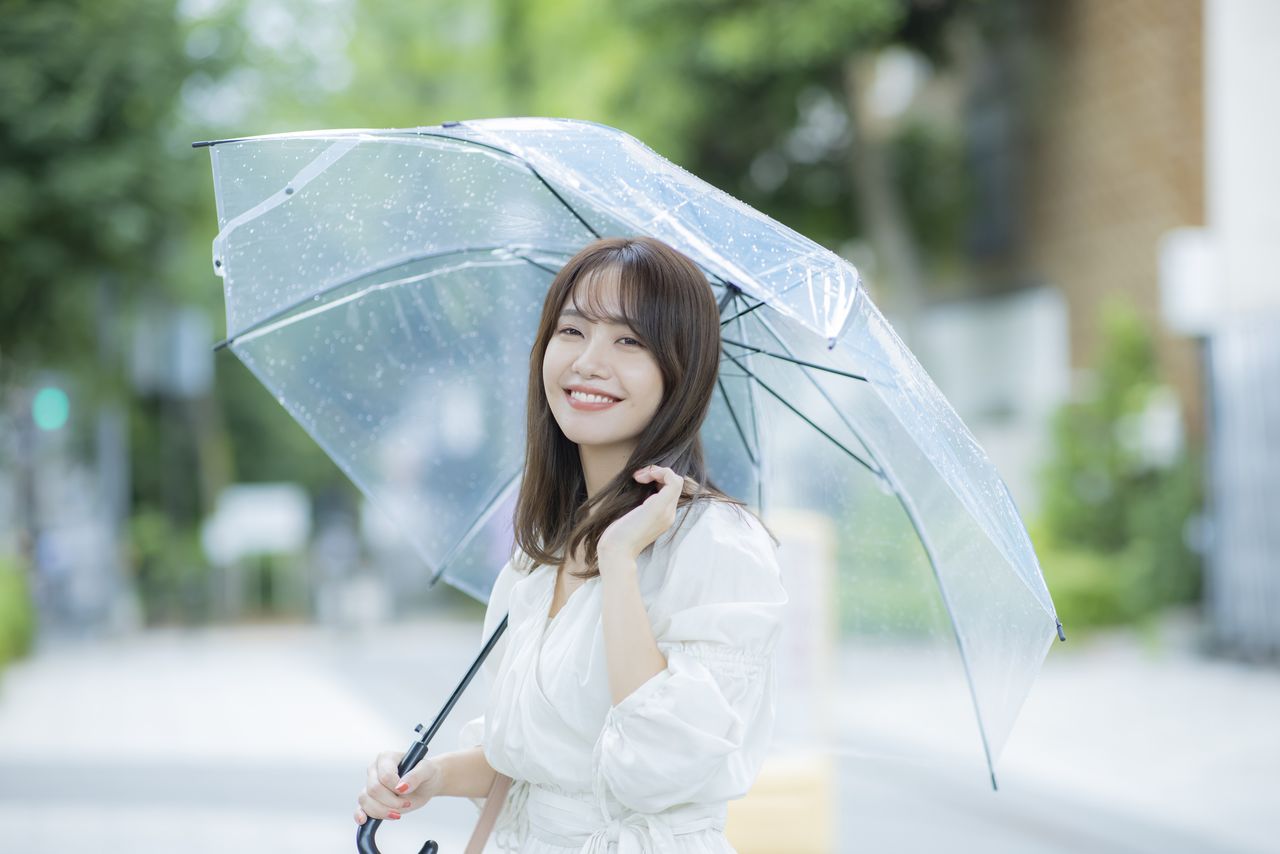 Japanese-style umbrellas have made a quiet comeback as an eye-catching accessory for maiko and geiko in Kyoto, and for staff handling greetings and departures at some traditional inns and restaurants, as well as for sprucing up interiors. They are also a popular element in woodprints and other traditional art. 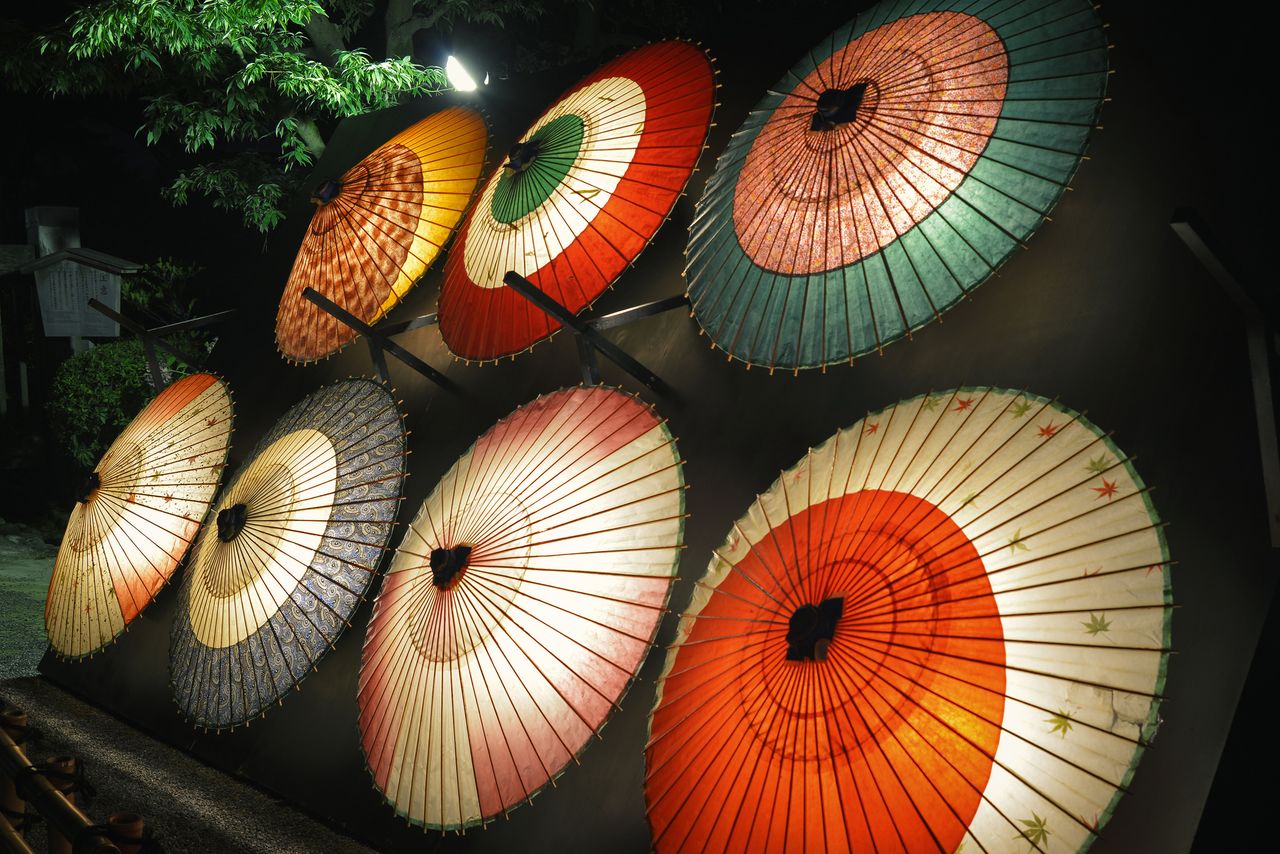 Japanese-style umbrellas in Kanazawa had to withstand the regular rain and snow of the Hokuriku region. (© Pixta)

In 2021, 250,670 lost umbrellas were handed in to police stations and other locations. Many plastic umbrellas are junked in such cases, leading to a waste problem. Under these circumstances, a private project was launched aiming to eradicate waste from disposable umbrellas by 2030. Nature Innovation Group, which runs an umbrella-sharing service, is collaborating with eight major Japanese companies to establish more places to borrow and return umbrellas, with the goal of reducing their environmental impact.

(Originally published in Japanese on June 7, 2022. With thanks for the cooperation of Shu’s Selection. Banner photo: Inside the Waterfront store.)