Society Culture Aug 6, 2016
Geisha have been a Japanese icon around the world for over a century. Skilled in traditional arts, the female entertainers continue to perform in Kyoto, Tokyo, and other regional centers.

Geisha have long been a symbol of Japan; the word became common in English as early as the late nineteenth century. The female entertainers appear at banquets where they perform traditional songs and dances or play on instruments like the samisen. The first geisha emerged in the Edo period (1603–1868). According to one theory, the women who served tea and sweets in Kyoto teahouses were influenced by kabuki, learning to dance and play the samisen as part of hospitality for pilgrims and other travelers. Geisha are still active today, largely in the corporate hospitality and tourism industries in Kyoto and Tokyo, as well as in smaller regional centers in Niigata and Akita Prefectures. 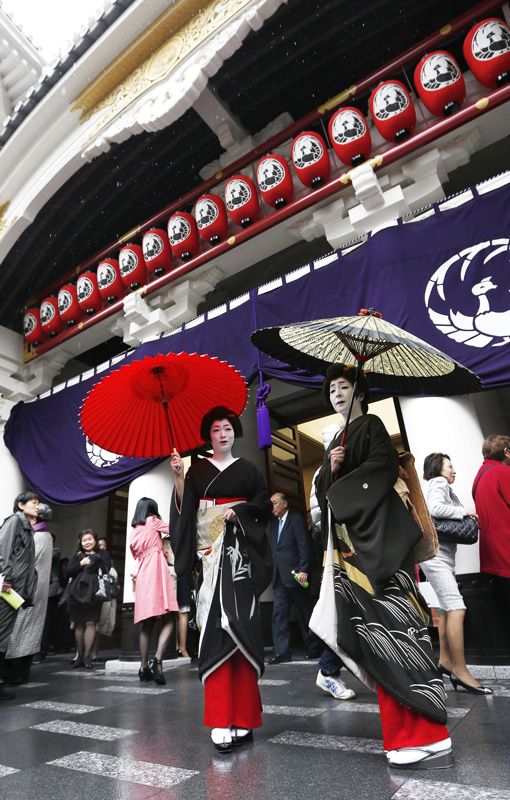 Geisha outside the Kabukiza theater in Tokyo. (© Jiji)

Girls need around five or six years of training to become geisha. Apprentices in Kyoto are known as maiko and have become an emblem of the city in their own right. The equivalent term in the greater Tokyo area is hangyoku, while oshaku is a general word for would-be geisha.

From the age of 15 until they are around 20 these girls study the tea ceremony, flower arrangement, traditional dance, the samisen, etiquette, and more as preparation for becoming geisha. They tend to wear brighter and more colorful kimono than full-fledged geisha, and the maiko of Kyoto are known in particular to sport broad sashes, tied in the darari no obi style, that dangle down almost to their feet. The kimono worn by maiko are also famous for being extremely long, so they have to hold them up while walking.

After apprentices complete their training, they switch to a standard kimono, tying their obi in a simpler knot. Incidentally, despite the general use of the word “geisha” in English, the names for the entertainers in Japanese vary by region. Hangyoku in Tokyo become geisha when they finish their apprenticeship, but in Kyoto maiko become geiko.

The elegant image of these traditional entertainers has made them the focus of works of popular culture in Japan and abroad. The American film Memoirs of a Geisha, which tells the story of a prewar female entertainer in Kyoto, won three Academy Awards in 2006.

Before hiring geisha it is necessary to make arrangements with the planned venue, with standard locations being ryokan, ryōtei restaurants, and teahouses.

A party with geisha is called an ozashiki and usually lasts for around two hours. Guests enjoy traditional performing arts while eating and drinking and then play games to musical accompaniment. Two or three geisha will typically attend each ozashiki, including tachikata and jikata, who specialize in dance and playing musical instruments, respectively.

Costs, which are around ¥20,000–¥40,000 per geisha, do not include the price of food and drinks, making it a potentially expensive form of entertainment. Many tourists take the less pricey options of dressing up as geisha themselves and getting a souvenir photo at a studio or catching a glimpse of one on the streets of Kyoto.

An increasing number of hotels, teahouses, and event facilities are seeking to meet booming tourist demand by offering the chance to view ozashiki-style entertainment at lower prices before the main parties start in the evening. These events may use interpreters or geisha proficient in English, Chinese, or other languages, so visitors who do not understand Japanese can get a first-hand experience of traditional culture.