Society Culture Jul 16, 2016
Traditional Japanese kimono span a wide variety of styles and types, ranging from formal attire for weddings and other ceremonies to casual summer yukata worn at festivals and as nightwear. While the time and technique required to properly don kimono largely consign them to special occasions, the mystique of Japan’s traditional wear continues to assure its popular appeal.

Dressing Up in Tradition

Kimono are one of the most recognizable aspects of traditional Japanese culture. A standard form of dress since ancient times, kimono are often worn in the modern era to lend occasions a sense of formality and flair. 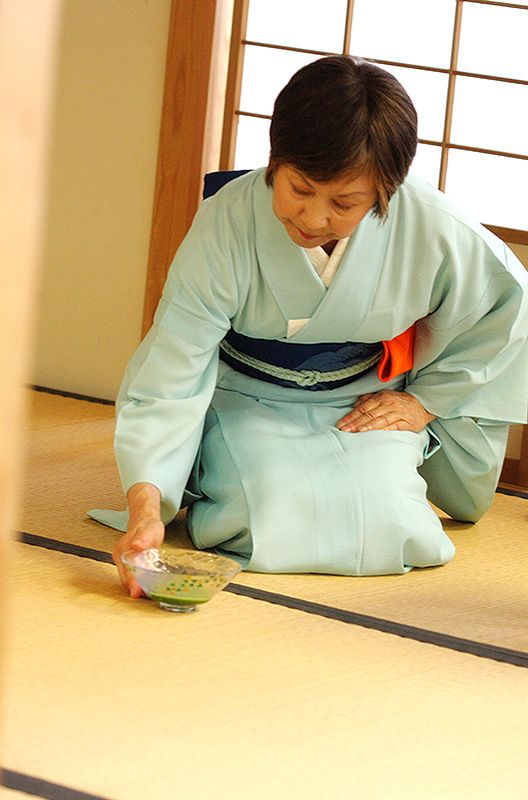 A kimono is generally worn when performing the Japanese tea ceremony.

While people generally go about their day-to-day lives in Western-style clothes, they may dress in a kimono for special occasions like weddings and graduations, or to take part in traditional arts like the tea ceremony, buyō dancing, kabuki, and nō plays. Kimono also serve as work attire for a range of professions, including Shintō and Buddhist priests, geisha, and traditional performers like rakugo storytellers, demonstrating the enduring prominence of Japan’s native garb.

For much of Japan’s history, the term kimono simply meant clothing—the characters 着物 mean nothing more than “a thing to wear.” But with the introduction of Western attire in the nineteenth century, the term came to mean Japanese-style wear. In particular, it refers to Japan’s emblematic wrap-around garb that features a hem extending to the ankles and is worn with an obi sash.

There are a wide variety of kimono, including formal and casual garments and seasonal dress like summer yukata. They are generally made from high-quality, natural materials like silk, wool, cotton, and linen, and often require special upkeep. Advances in synthetic fibers, however, have helped produce kimono that are comparably easy to care for and can be worn in the rain without concern.

A 2011 survey found that while nearly 80% of Japanese men and women have worn a kimono at some time, fewer than 40% actually own one. One factor is the decline in occasions calling for traditional dress. A majority of respondents noted that they put on a kimono less than once every five years. As occasions for wearing wafuku, or Japanese dress, diminish, rental services have gained in popularity by allowing people to dress up for a special event without needing to invest in a full outfit.

Wafuku is traditionally made from a long, single piece of cloth or tanmono that is cut into rectangular sections and sewn together. This design makes kimono exceedingly easy to adjust and resize, as well as enabling material to be reused. As such, it is common for people to pass down a kimono through successive generations, retailoring it to meet modern tastes while maintaining the original feel and beauty. 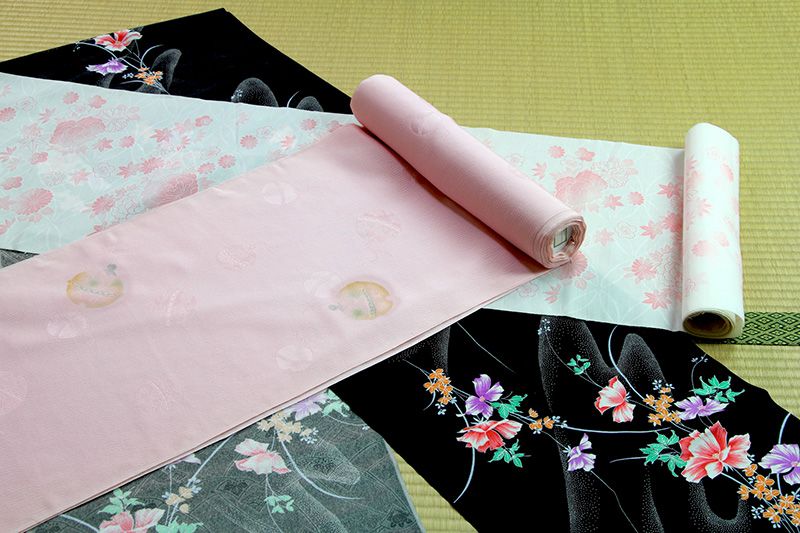 Different colors and designs of tanmono.

Wafuku in the Modern Day

The cost of a kimono depends on such factors as the quality and type of material, dyeing (sometsuke), design (etsuke), and embroidery, and ranges from around ¥30,000 for inexpensive types to several million yen for high-end varieties. Japanese dress also comes with a broad spectrum of accessories that are coordinated according to the occasion and status of the wearer. A ceremonial tomesode kimono generally worn by a married woman calls for at least 17 separate accoutrements, including special undergarments, a folding fan, sandals (zōri), and a handbag. One of the most defining fixtures for a kimono is the obi, which can change the overall impression of an ensemble depending on how it is tied. 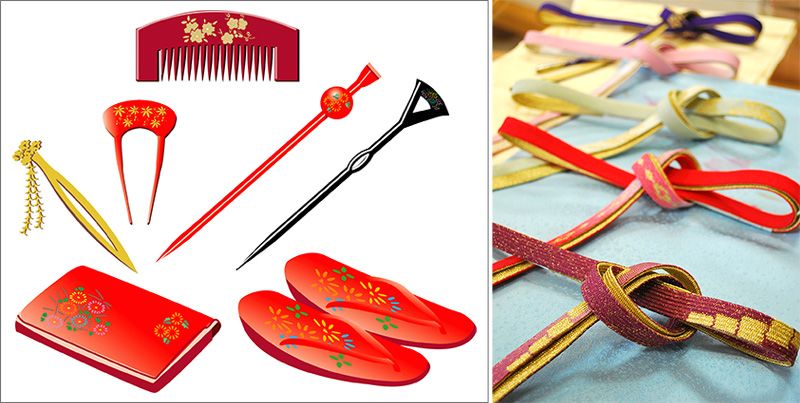 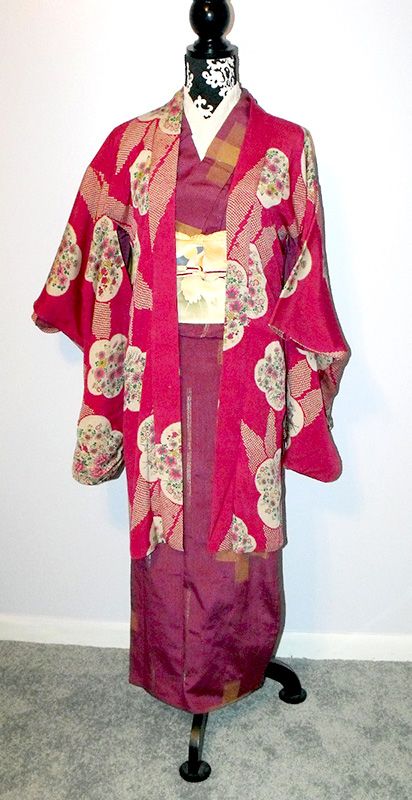 Traditionally children would learn the art of wearing a kimono from their parents, but in modern society people frequently turn to specialized schools for instruction.

Among kimono aficionados, however, there is a growing demand for antique attire made using old-style sewing techniques and featuring novel designs, with the number of specialty shops rising. One youth trend that has emerged is to don ribbons, frills, and other nontraditional accessories to infuse an antique kimono with a slight Western air. 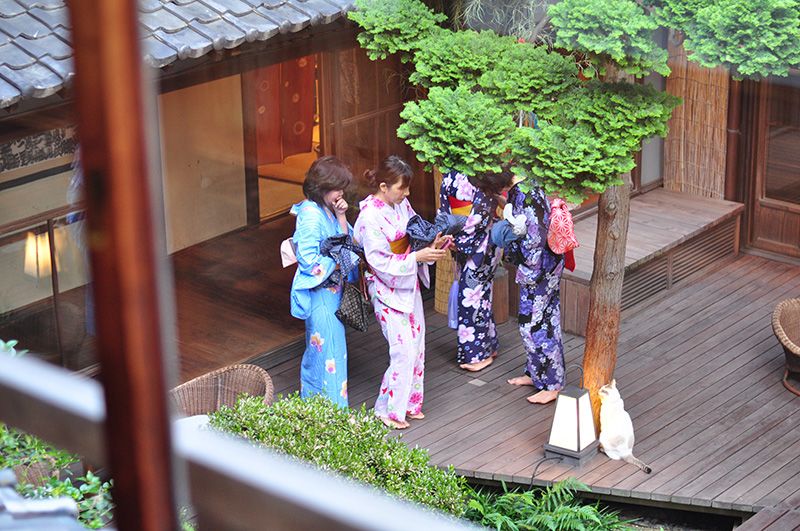 Revelers dressed in yukata and waving broad fans called uchiwa are a common sight at such summer events as bon odori and firework displays. These light cotton garments also serve as postbath attire during the hottest months of the year and as nightwear, particularly at ryokan, which frequently provide them for guests along with towels. They are thought to have first appeared as bathing garments among the aristocratic class in the Heian period (794–1185), a status they maintain at traditional inns and hotels, which commonly provide them to guests as room wear. 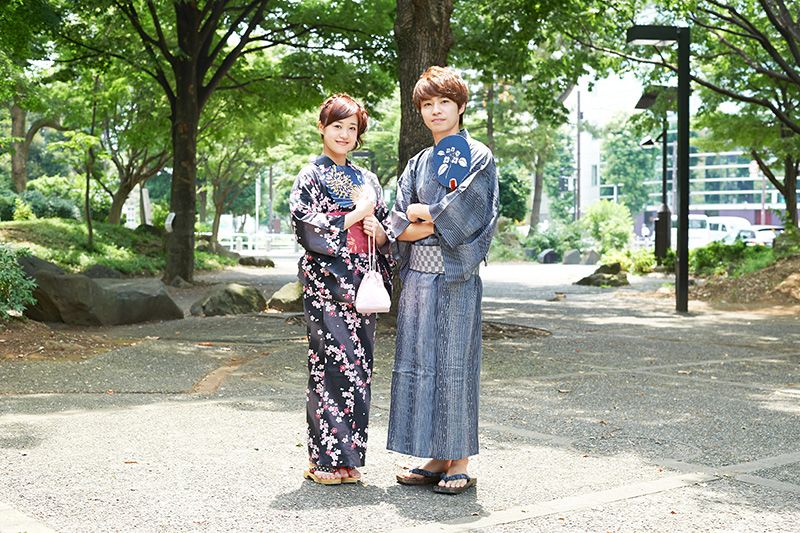 A couple in summer yukata.

Compared to a formal kimono, yukata are a more accessible option for traditional dress as they are relatively easy to put on, inexpensive, and washable at home. Prices vary, but stores frequently carry options under ¥10,000. A 2013 survey found that roughly half of women 20–39 years old own at least one yukata.

Yukata are also popular tourist items and a highly sought-after souvenir for foreign visitors to Japan.