Japan’s ryokan present a contrast to modern business hotels by offering a classical vacation experience. These traditional inns are fitted out with washitsu (Japanese-style rooms) with tatami flooring, shōji (sliding paper doors), and tokonoma (decorative alcoves) displaying hanging scrolls or ikebana (flower arrangements). Guests can enjoy sleeping on futons, eating washoku (Japanese cuisine), and relaxing in large communal baths in surroundings that recall a past era. Hollywood stars like Tom Cruise and Tommy Lee Jones are among the international fans of ryokan.

Lodgings vary in size, but as a rule they must have at least five rooms to qualify as ryokan—larger ones may have 80 or more. There are over 40,000 licensed inns around the country, each offering distinct cuisine and atmosphere reflecting the region where they are located.

Staff members welcome guests and show them around upon arrival. They also perform other tasks, including laying out futons at night and packing them away in the morning. They are also available to answer any questions the guests have.

As in Japanese homes, ryokan guests should take their shoes off in the entrance hall, trading them for slippers provided by the establishment. It is often possible to borrow sandals or geta (wooden clogs) for brief saunters outside.

Unlike hotels, there are no swimming pools or gyms at ryokan, but there are often large communal baths. These are separate for men and women and may feature an outdoor bath known as a rotenburo. There are often karaoke booths, table tennis tables, or other simple leisure facilities. 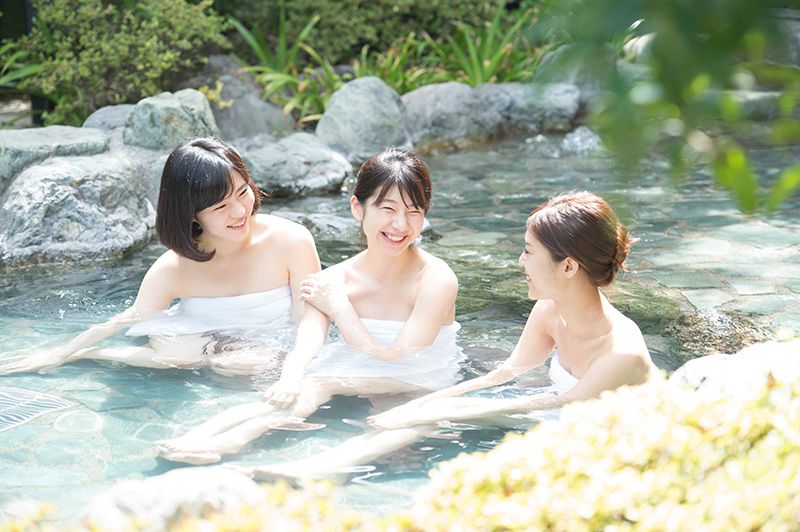 Rotenburo (open-air bath). Note that towels, present in this photo to preserve decorum, are not generally taken into the water.

After a slow soak, guests may relax in their rooms wearing the yukata robes, which also double as nightwear. At ryokan, it is acceptable to walk around the building in these robes. In onsen (hot spring) resort towns, meanwhile, many people wear them as they stroll through the streets.

Typically, dinner and breakfast are included in a ryokan package. Dinner may take place in a dining area or in guests’ rooms, in which case staff members will bring courses and take extra drink orders as necessary. Menus are often extravagant, featuring local and seasonal delicacies. 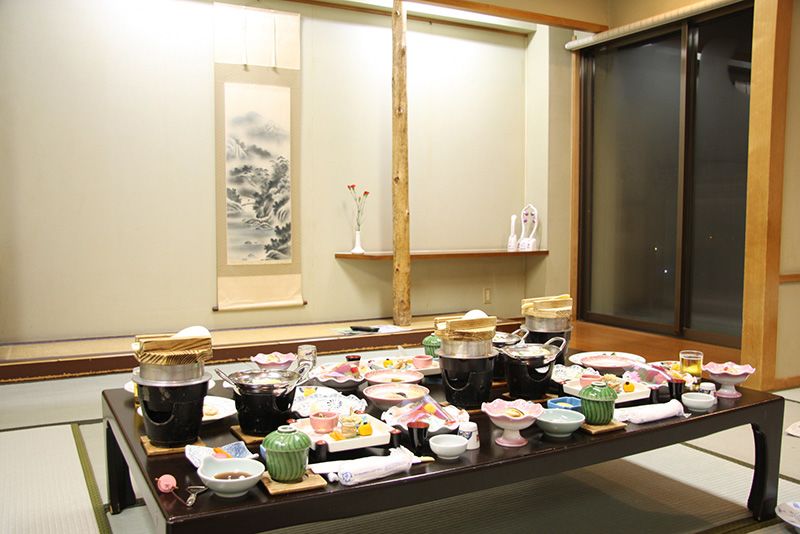 Dinner laid out in a ryokan room.

In all ryokan, it is best to reserve rooms in advance by Internet or telephone, rather than turning up unexpectedly. Tipping is rare in Japan, but the custom of providing money known as kokorozuke in the case of exceptional service can still be found at some high-end ryokan.

Staying in a ryokan is one way to see traditional Japanese architecture up close. Establishments that have been in business for a century or more are common: these usually offer the opportunity to appreciate old-style amenities, including antique furniture and traditional tableware.

Keiunkan in Yamanashi Prefecture was founded in 705 and holds the Guinness World Record as the oldest hotel. Another ryokan, Hōshi in Ishikawa Prefecture, was founded just a few years later in 718. The three most famous ryokan in Kyoto are said to be Tawaraya, boasting 300 years of history, where Steve Jobs regularly stayed; Sumiya, renowned for its tea ceremony and Kyoto-style kaiseki cuisine; and Hiiragiya, which was popular with the Imperial family and literary figures in the Meiji era (1868–1912). 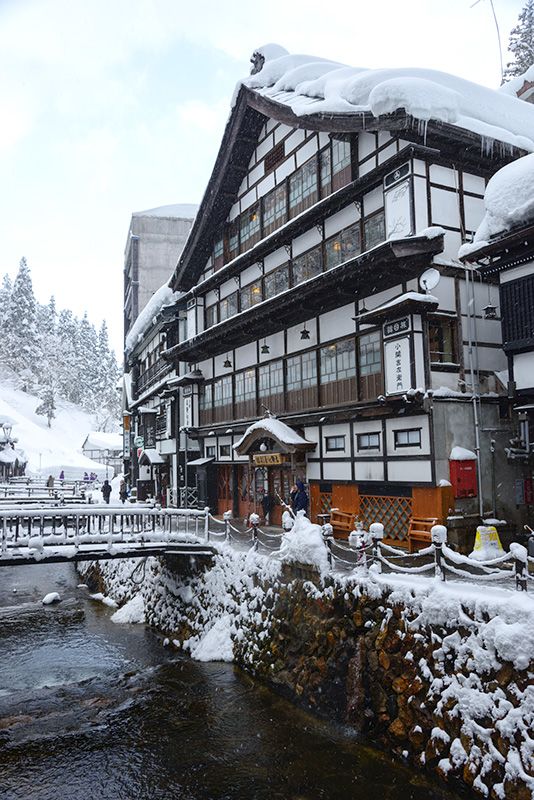 Many ryokan also offer packages for bed and breakfast only. As a growing number of foreign tourists make their way to Japan, some establishments have started to provide English-language maps marking local shops and restaurants. Sawanoya in Ueno, Tokyo, is one of a few ryokan that particularly caters to international visitors.

A 2014 survey of foreign tourists conducted by the Ministry of Land, Infrastructure, Transport, and Tourism found that the main reason first-time guests chose to stay at ryokan was because they were interested in Japanese-style rooms and architecture. For those staying over five or more times, the biggest draw was onsen baths. When asked what the appeal of ryokan was, the top answers were the Japanese-style rooms and fittings (65.8%), the chance to enjoy the peaceful, relaxing atmosphere (60.3%), and washoku cuisine (59.7%). Some responded that they were able to overcome the language barrier through gestures, pictures, individual words, and the use of dictionaries. There are also support organizations (listed below) for helping foreign tourists to book and stay in ryokan.

While retaining their traditional atmosphere, ryokan are adapting to new needs and providing Japanese-style hospitality to both domestic and international travelers.