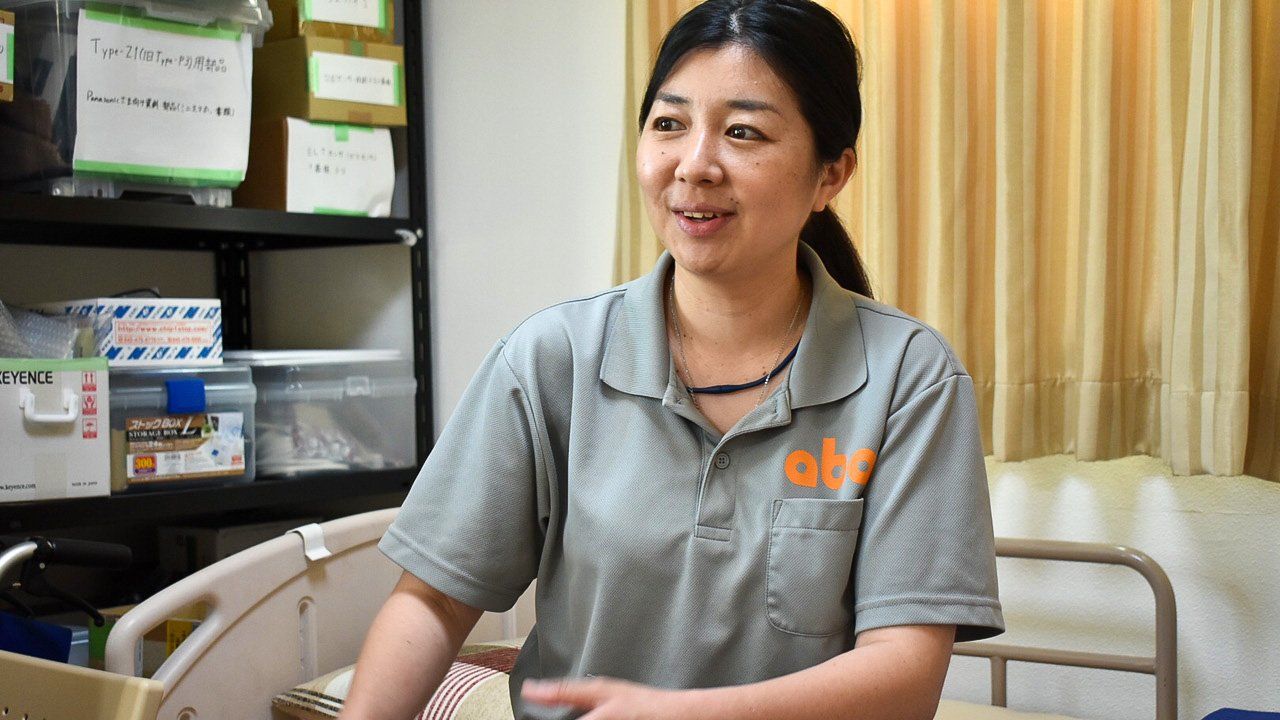 Society Science Health Sep 1, 2022
Galvanized by the plight of her own grandmother, Ui Yoshimi embarked on a career as an engineer specializing in nursing technology. Now her AI-assisted odor-sensing bed pad is helping revolutionize elder care in Japan. 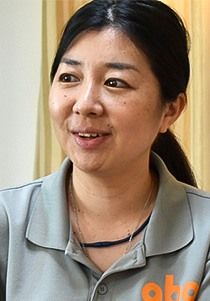 Chief executive officer and representative director, Aba Inc. Born in Chiba Prefecture in 1988. Founded Aba while enrolled as an undergraduate at Chiba Institute of Technology and earned her PhD while she worked. Selected as a NISTEP (National Institute of Science and Technology Policy) Nice Step Researcher in 2019.

Japan is at the forefront of a crusade for efficient, compassionate, personalized long-term care supported by cutting-edge technology. A rising star in this campaign is 33-year-old Ui Yoshimi—inventor, mother of two, and chief executive officer of a care-tech startup by the name of Aba Inc.

Ui’s development team works out of a two-story house in a quiet residential neighborhood in Funabashi, Chiba Prefecture, on the outskirts of Tokyo. In contrast with the building’s unassuming exterior, the interior bristles with electronics and assistive equipment. This is research and development headquarters for Aba Inc., known in the care industry for its cutting-edge odor-sensing bed pad. Already in use in long-term care facilities around Japan, the Helppad is contributing to the transformation of one of the most challenging aspects of senior care: toileting and changing. 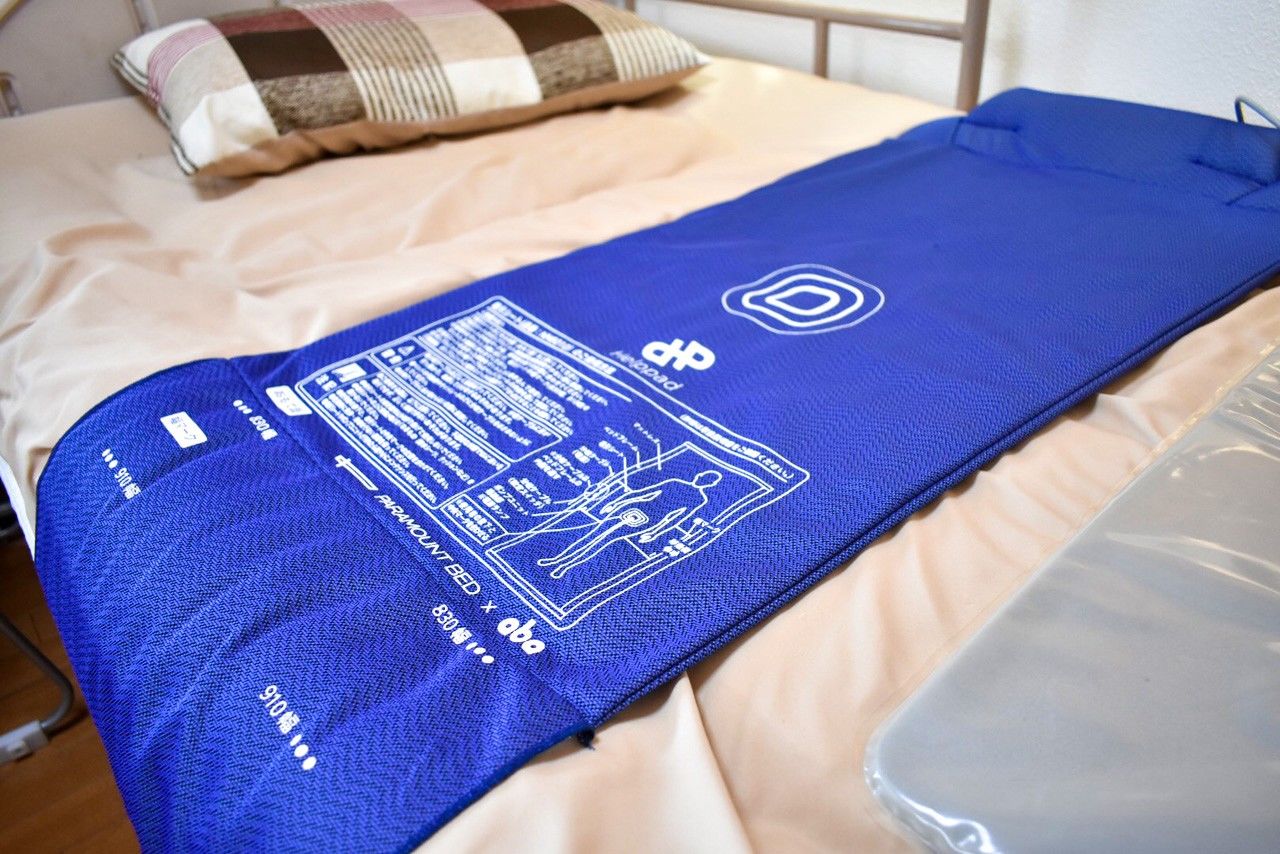 To understand what drives Ui, we need to go back some 20 years.

When Ui was growing up, her grandmother assumed most of the childcare responsibilities, since her mother had her hands full with the family business. But when Ui was still in junior high school, her grandmother suddenly changed. She fell into a deep depression and was soon in need of nursing care. The despair and frustration Ui felt at her own inability to help her grandmother had a profound influence on her subsequent education and career path.

An additional impetus came from the care robot Ui encountered during a visit to a university campus. “That got me thinking about family caregivers and the idea of developing new technologies that would allow anyone to provide high-quality senior care, at home,” Ui recalls.

Upon graduating from high school, Ui entered the Faculty of Advanced Engineering at the Chiba Institute of Technology. She majored in robotics under Professor Tomiyama Ken and, on Professor Tomiyama’s recommendation, completed a student practicum at a nursing home catering to bed-ridden seniors and those with dementia.

On the very first day of her practicum, Ui watched with alarm as two care workers prepared a dementia patient to go home for a visit with family. Having administered a laxative, one aide restrained the patient while the other pressed hard on her lower abdomen. Tears came to Ui’s eyes as the patient cried out in distress. When Ui asked one of the workers if the patient approved of such treatment, the answer was, “I don’t know.” It turned out that the family had requested that the patient’s bowels be emptied before she came home. Ui realized then the extent to which families with elderly and infirm members rely on the services of care workers to facilitate even part-time care within the home. It was an unforgettable first lesson in the realities of senior care.

Patients who can neither toilet themselves nor call for an aide when they need to relieve themselves wear diapers. But unless the diaper is changed quickly, it can leak, necessitating a change of clothing and bedding as well, which takes about 10 times longer. To avoid this, the care staff check each patient’s diaper six to eight times daily, and one out of three or four times, they come up empty. “I just wish I could see inside the diaper without undoing it,” sighed one worker.

If only there were a way to fulfill that wish electronically, thought Ui, the lives of staff and patients alike could be substantially improved. A monitoring device equipped with an advanced odor sensor could not only alert staff in timely fashion but even help them determine the frequency and timing of events, allowing workers to allocate their time more efficiently even while minimizing patient discomfort. Automatic logging of information would also translate into labor savings, especially since most nursing homes then still had their staff inputting all such patient data manually. In some cases, the data might even allow workers to anticipate and toilet the patients before incontinence events occurred.

Ui launched her student project in 2007. At first she felt overwhelmed by the mechanical, electronic, and programming requirements of such a system. But with the encouragement of Professor Tomiyama, she persevered. She founded Aba in 2011, during her senior year. For chief technology officer, she managed to recruit wunderkind robotics engineer Tanimoto Kazushiro, a former core member of CIT’s championship RoboCup soccer team. 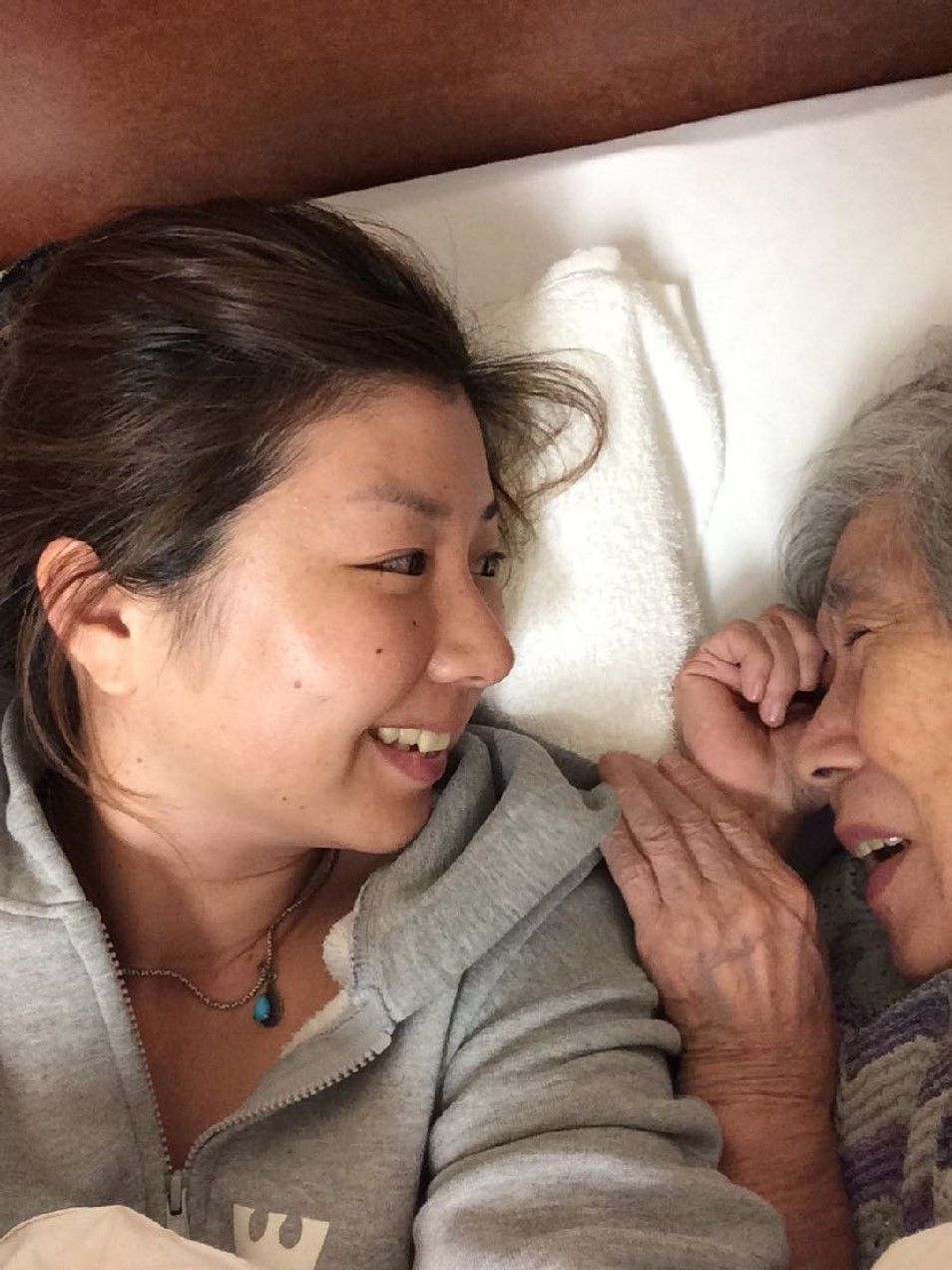 From 2013 on, Ui pursued her R&D while working weekends at a nursing home, forging links with professionals on the ground. But the project did not proceed according to plan. To develop AI technology that learns, one must input a wealth of empirical data, and the staff at care facilities had neither the time nor energy to help out with such experimentation. Enlisting healthy volunteers as test subjects was even harder; excretion is, after all, among the most private of human functions.

In desperation, Ui volunteered herself. Donning an adult diaper, she lay down on a futon in the two-room apartment Aba was renting as an office and waited, while Tanimoto monitored the results on a computer. When the sensor responded to the odor that was gradually pervading the room, Ui and Tanimoto were so excited they completely forgot their embarrassment.

The Road to Commercialization

That was only one of many hurdles Ui had to overcome. She needed to incorporate her state-of-the-art odor sensor in a thin bed pad so as to minimize the inconvenience for patients and caregivers. She needed AI technology that could learn to distinguish between urine and feces. She needed a data system to log the events automatically, a program to discern patterns in timing and frequency, and an application to provide workers with instant online access to all this information. Once all these elements were successfully integrated, care workers would be able to adjust patients’ feeding, bathing, and recreation schedules to the movement of their bladder and bowels, which are outside of anyone’s control. That would lead to better, more efficient care.

A development partnership with Paramount Bed, a major hospital equipment manufacturer, helped Aba along the path to commercialization. Still, Yamaguchi Satoshi of Paramount Bed’s R&D division takes his hat off to Ui and her team for surmounting “extremely difficult challenges that a manufacturer would never have been able to tackle alone.”

Since 2015, the Helppad project has also benefited from a Japanese government program that provides subsidies to promote the development and adoption of “nursing care robots,” a category into which the Helppad falls. Altogether, the company has raised about ¥1 billion from a variety of sources, including such venture capital funds as Son Taizō’s Mistletoe and Nagata Akihiko’s Real Tech Fund.

In 2019, almost a decade after the company’s founding, Aba’s Helppad came on the market. Today it is in use at more than 100 care facilities around Japan.

Ui’s company now has 10 full-time employees and another 30 or so people working for it under contract. From the start, Ui (who has two children herself) conceived of Aba as a family-friendly employer, offering fully remote and flextime work arrangements long before the COVID-19 pandemic necessitated them.

Ui’s contribution to care tech has not gone unrecognized. In 2019, she was selected as a Nice Step Researcher by NISTEP, the National Institute of Science and Technology Policy, and in 2021 she was listed as a top Innovator Under 35 by the Japanese edition of MIT Technology Review. 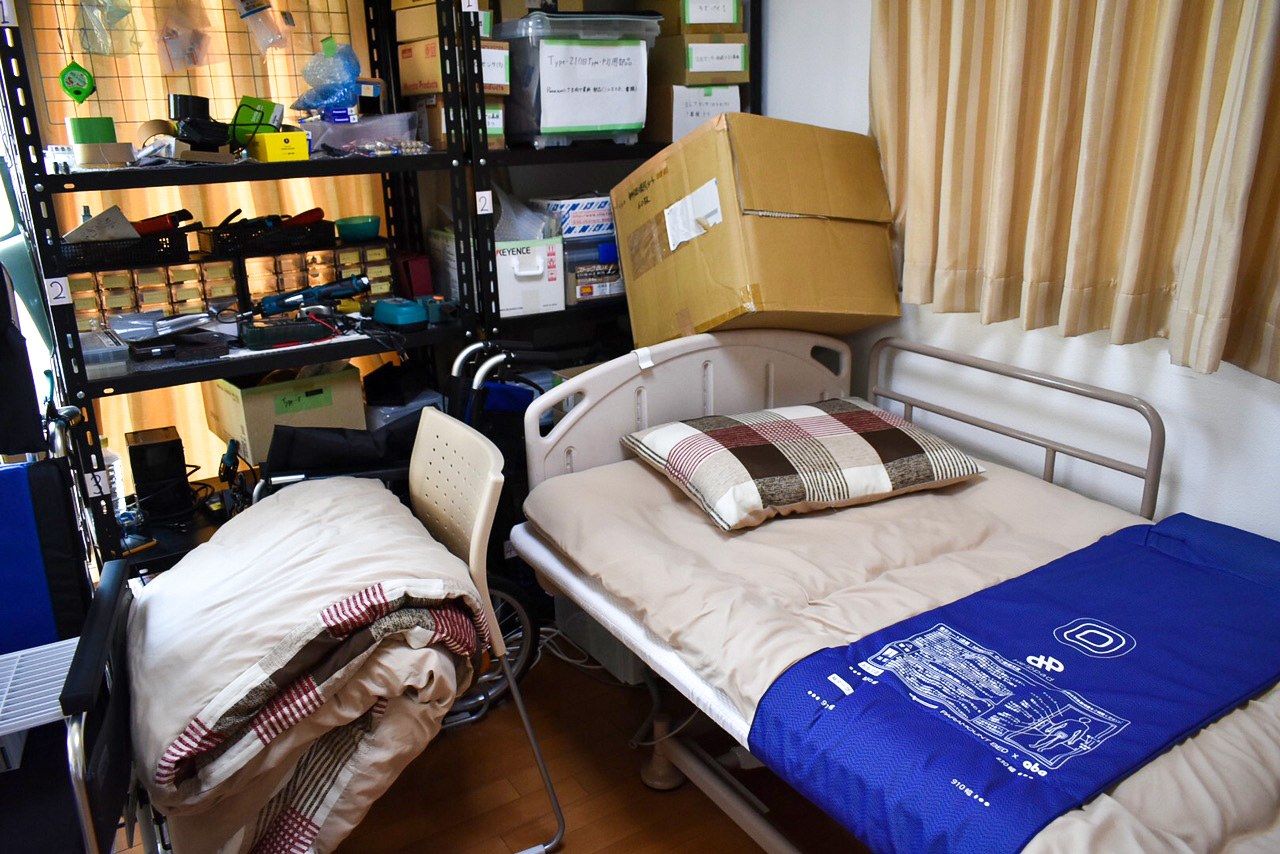 While growing, Aba retains the atmosphere of a “garage startup.” On the second floor, a conference room doubles as a lab. (© Nippon.com)

The technology developed for the Helppad project and the masses of data it has generated have already begun to spawn spinoff products. CareS, Ui’s latest project, is an application that optimizes nursing care by using patient data from the Helppad to generate workflow and shift charts. “Between 30 and 40 percent of care workers’ on-duty time is taken up with indirect care, such as manual recording of vital signs,” Ui points out. High-tech tools like Aba’s systems can free workers to spend more time with patients while facilitating care tailored to each individual’s changing biorhythm.

Aba has also teamed up with Kao Corp. and other big businesses to explore the potential of odor-sensing technology as a way to detect illness. This project was inspired by a care worker who told Ui she could tell when patients were infected by norovirus by the smell of their stool. If such research pans out, it could help facilities spot the presence of infectious disease before it spreads to others. 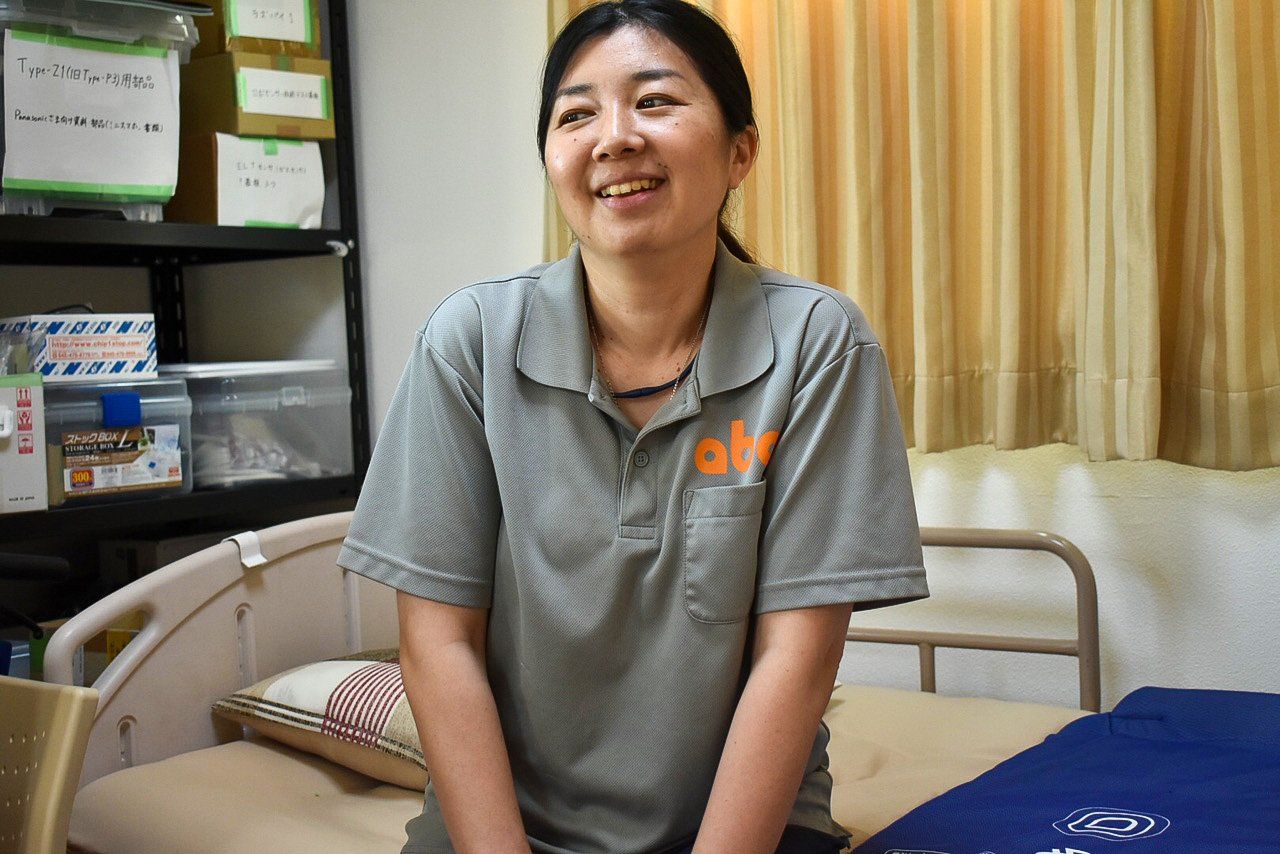 Ui has her eyes on the future of home care. (© Nippon.com)

As of the end of February 2022, there were 6.89 million elderly persons in Japan in need of part-time support or long-term care, according to the Ministry of Health, Labor, and Welfare. As of 2016, almost 6.99 million people (mostly women) were caring for elderly family members, and each year roughly 100,000 able-bodied people quit their jobs to devote themselves to caregiving.

Ui has an eye on the rapidly growing home-care market. Her dream is to equip each household with technology like the Helppad and turn services once provided only in specialized facilities into something families can offer to their own members in the homes and communities where care recipients are most comfortable. “Expert nursing care is a fascinating and really cool job,” says Ui proudly. Like Florence Nightingale in the nineteenth century, she aspires to elevate the prestige of her profession.

Ui believes Japan already has much to teach the world about senior care. She has received inquiries about her Helppad from Singapore, South Korea, and Taiwan, and with pandemic restrictions loosening, she is eager to follow up. In fact, she is scheduled to conduct a practical demonstration in Singapore this fall. “Japan has a wonderful care culture,” says Ui, “and I want to help transmit it to the rest of the world.” 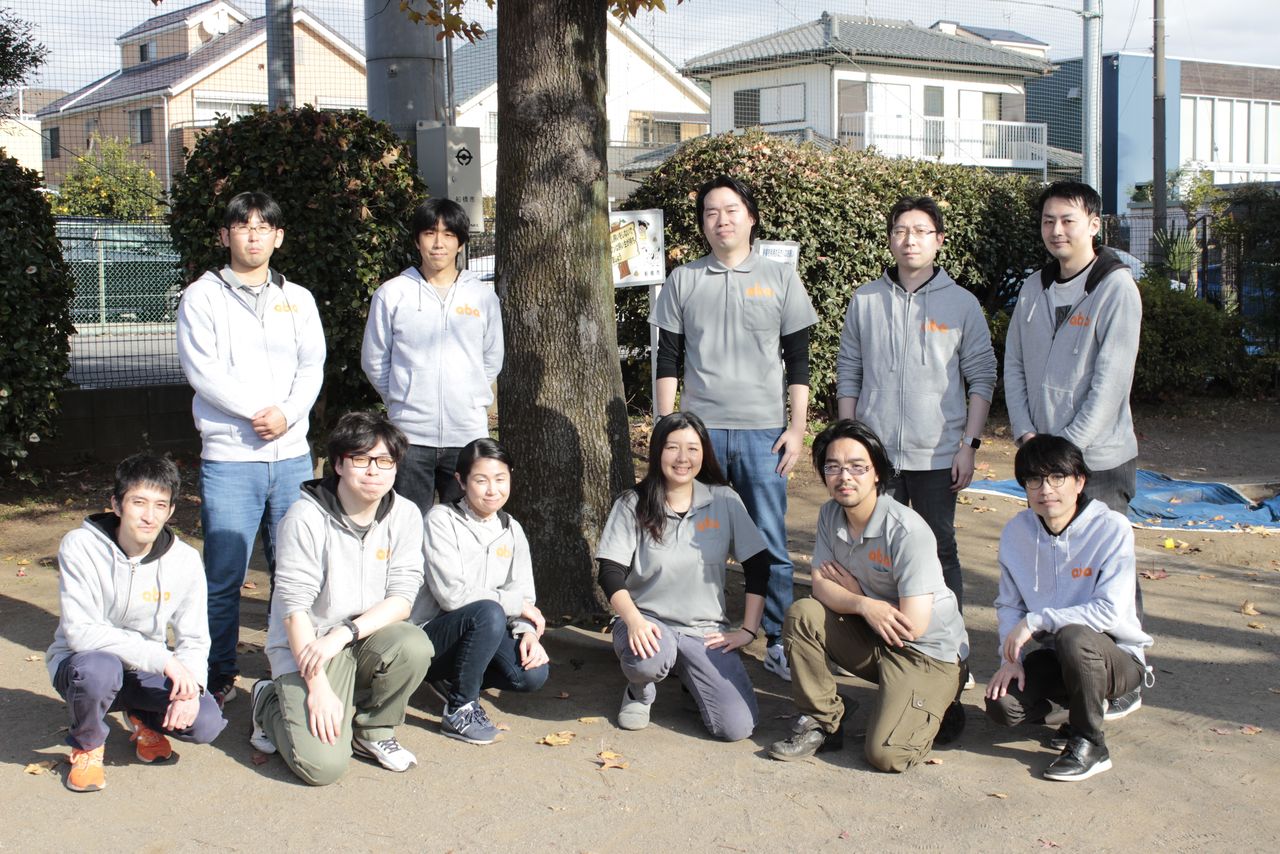