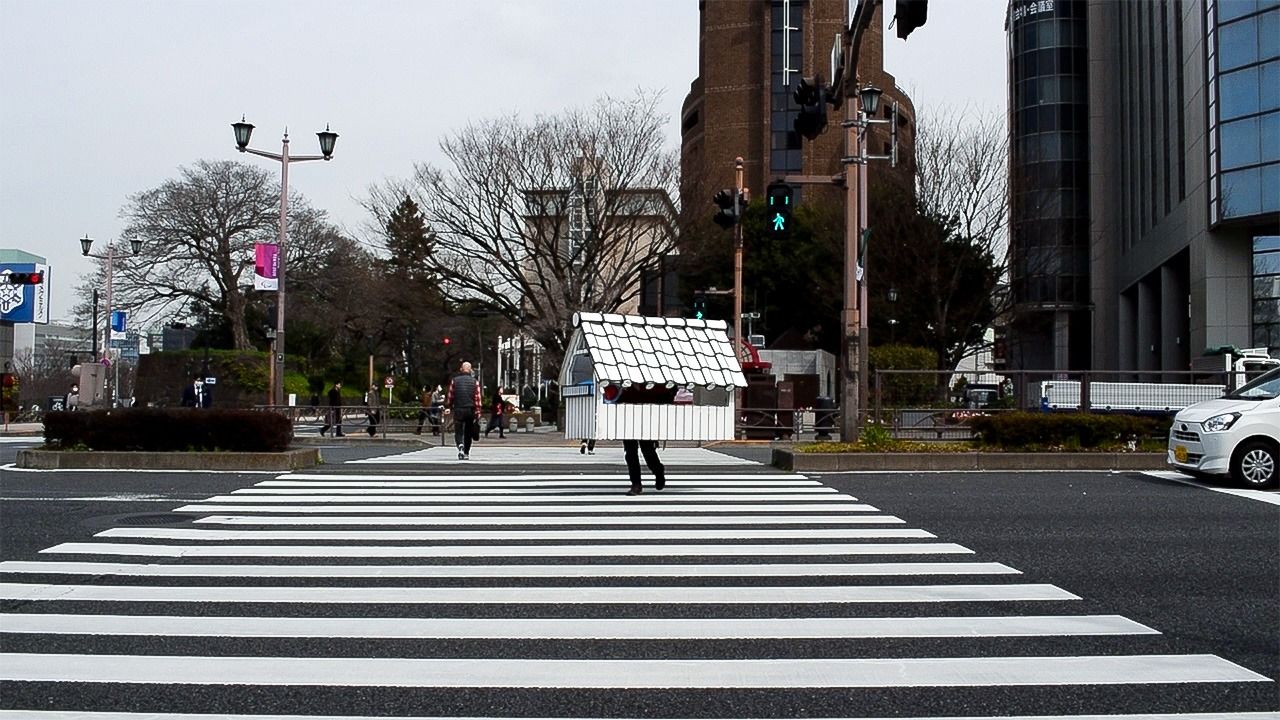 Exploring the Contradictions of Contemporary Society

Art Architecture Lifestyle Society Jul 9, 2021
A tiny white house made of polystyrene foam moves along on two legs. Who could not fail to be surprised at such a sight? The legs belong to contemporary artist Murakami Satoshi, who has walked the length and breadth of Japan, setting his “home” down in vacant spots wherever his travels take him. A look at his take on life and art.

As of now, we’re still in the throes of the COVID-19 pandemic, and mask-wearing is required everywhere. You may leave your phone and wallet behind when you go out, but wearing a mask is a must. Everyone does so, but I find them stifling. I’d like to dispense with wearing one, so whenever possible, I go without.

When does a person need a mask? Well, you have to wear one if you’re shopping in a supermarket, taking a break at a café, or working a part-time job. Come to think of it, all these occasions involve money. Using money means you’re interacting with others. Masks, on the other hand, are a barrier to protect others from being exposed to droplets you may shed, and that cuts off contact. Money creates interaction. Masks, on the other hand, stifle exchanges.

Developing A Concept for Living as Art

Every day, I live by interacting with others through the medium of money, so it’s not possible to distance myself from quotidian social issues. This dawned on me after the triple disaster of March 11, 2011, when living my life as usual began to make me feel caged in. I’d taken part in demonstrations against restarting nuclear reactors in this country, but I increasingly felt that somewhere along the line, any money I spent might be used for running nuclear reactors, or that my buying a beverage at a convenience store might ultimately lead to delivery drivers not getting enough sleep because they needed to transport merchandise at all hours.

Work, pay rent, shop at a supermarket—I gradually stopped being able to stomach the everyday routine: Somehow, it was as though I was “being made to live.” That kind of humdrum existence, which led to the Fukushima Daiichi Nuclear Power Station accident and drove local residents from their homes, has trapped us, and unless we go to the Amazon or the savannah to live as hunter-gatherers, there’s no escaping the hamster wheel of life.

That led me to conclude that, as an artist, I needed to develop a new concept for living to express my art. Starting in February 2014, outside the hours I spent working my seven-day-a-week part-time job, I holed up in my apartment, constructing my tiny house over two months. It has roof tiles, windows, a door that locks, and even a nameplate. In April that year, I quit my job, vacated my apartment, hoisted my house onto my back, and set out for life on the road. Ever since then, I’ve been leading a peripatetic existence, taking only occasional breaks. 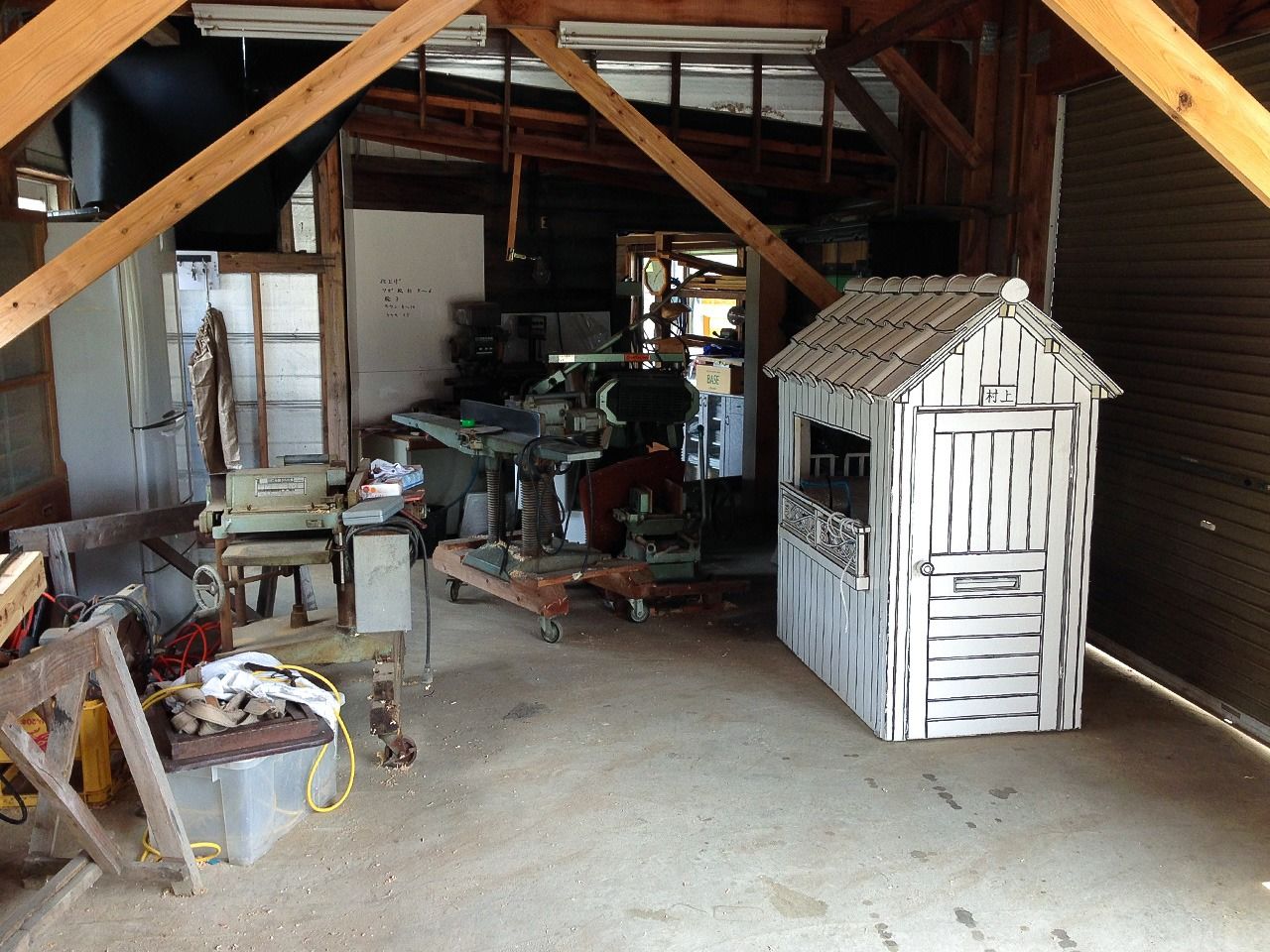 A Different Floor Plan at Every Destination

For me, life on the road is simply going from place to place with my house on my back. Before I set out, I thought that settling down for the night meant simply putting my house down somewhere on the street. How naïve of me. On my first day out, I left my house on the side of the road while I popped into a sentō public bathhouse. I returned to find it surrounded by police, who gave me a stern warning that I was unlawfully occupying the roadway and ordered me to take my house and move along at once. I learned that most of the land in this country belongs to someone, and ever since, I’ve had to find a place to lawfully “park” my house every night. 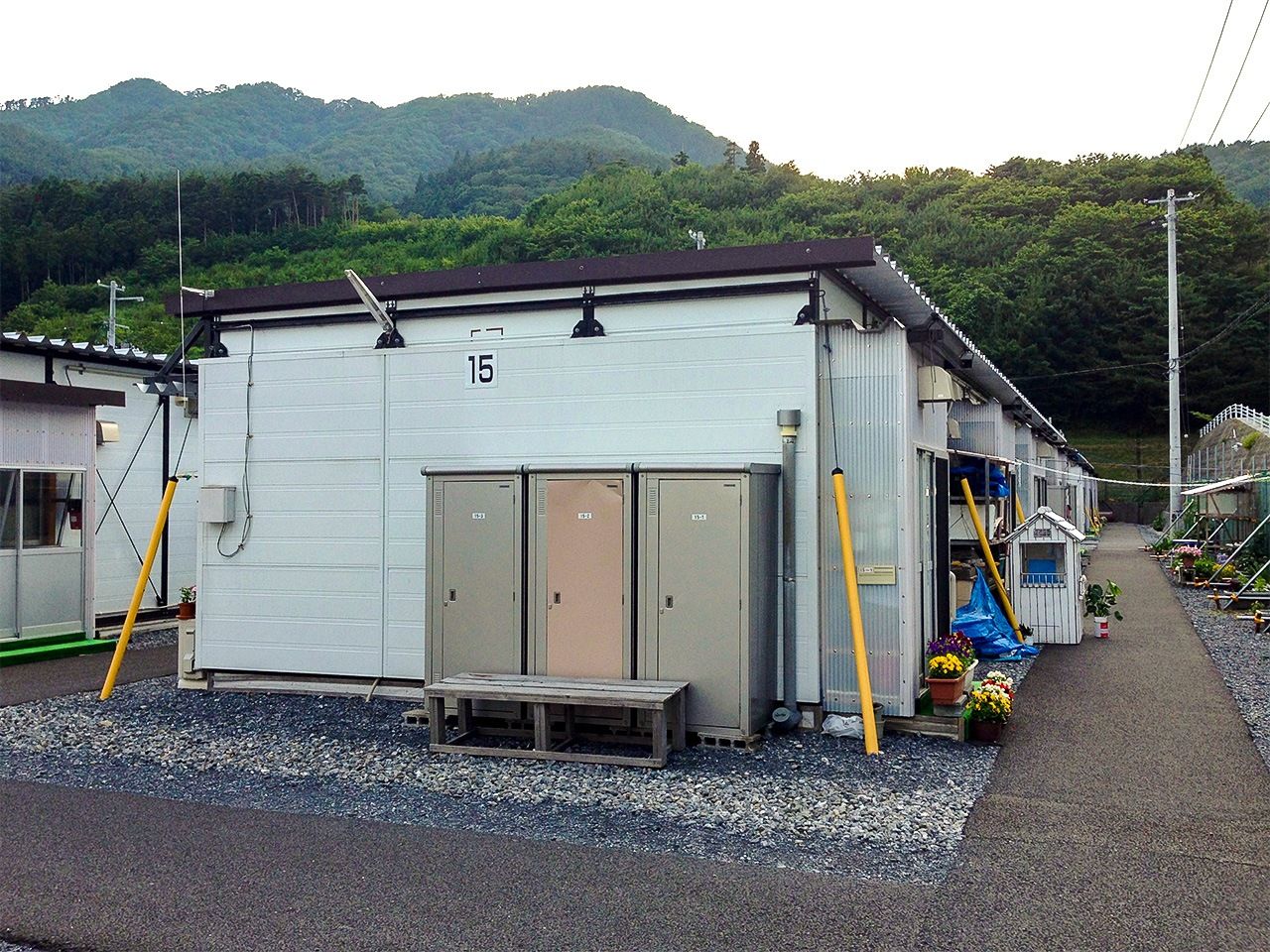 I often spend the night on the grounds of a shrine or temple, after gaining permission. Wherever I find myself, I ring a doorbell, explain my “mobile” way of life, and ask whether I can park my house until the next morning. Sometimes I’ll get the OK, but oftentimes my request is refused. That means starting over again at the next likely spot, carrying my house, which weighs 10 kilograms, on my shoulders until I can set it down somewhere. After this routine, day in and day out, it became clear that my house had certain drawbacks as a home. A home’s most important function is to serve as a bedroom, but until I find a spot to set it down, my house can’t function as a home. 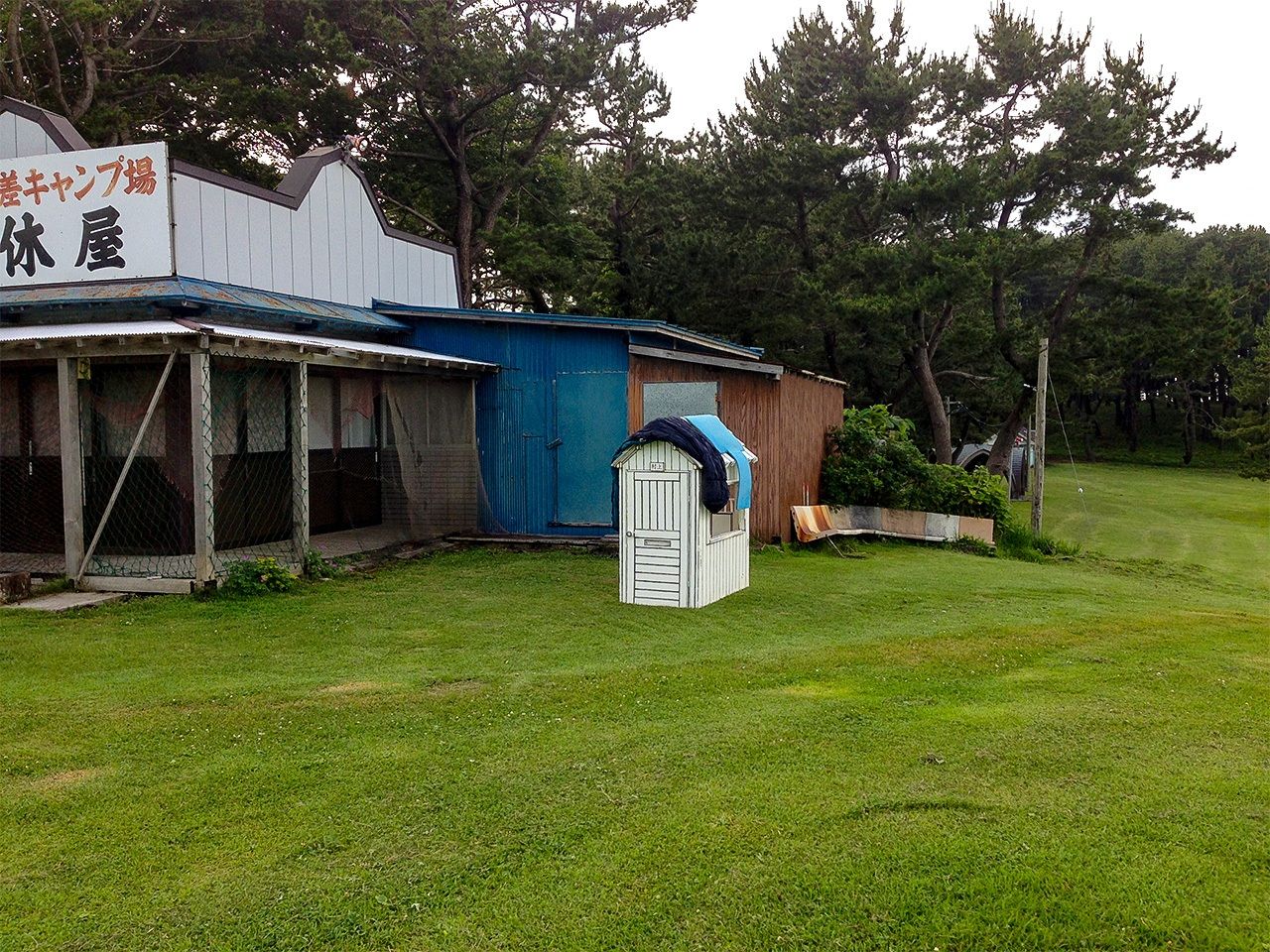 But even given the importance of sleep, I’m not just someone who rises in the morning and lies down at night. I’m a human being, with physical needs: I need to eat and drink, use the toilet, wash, and brush my teeth. My house, though, is just a bedroom. My solution is to find the facilities I need wherever I end up for the day. I call this “drawing a floorplan.” 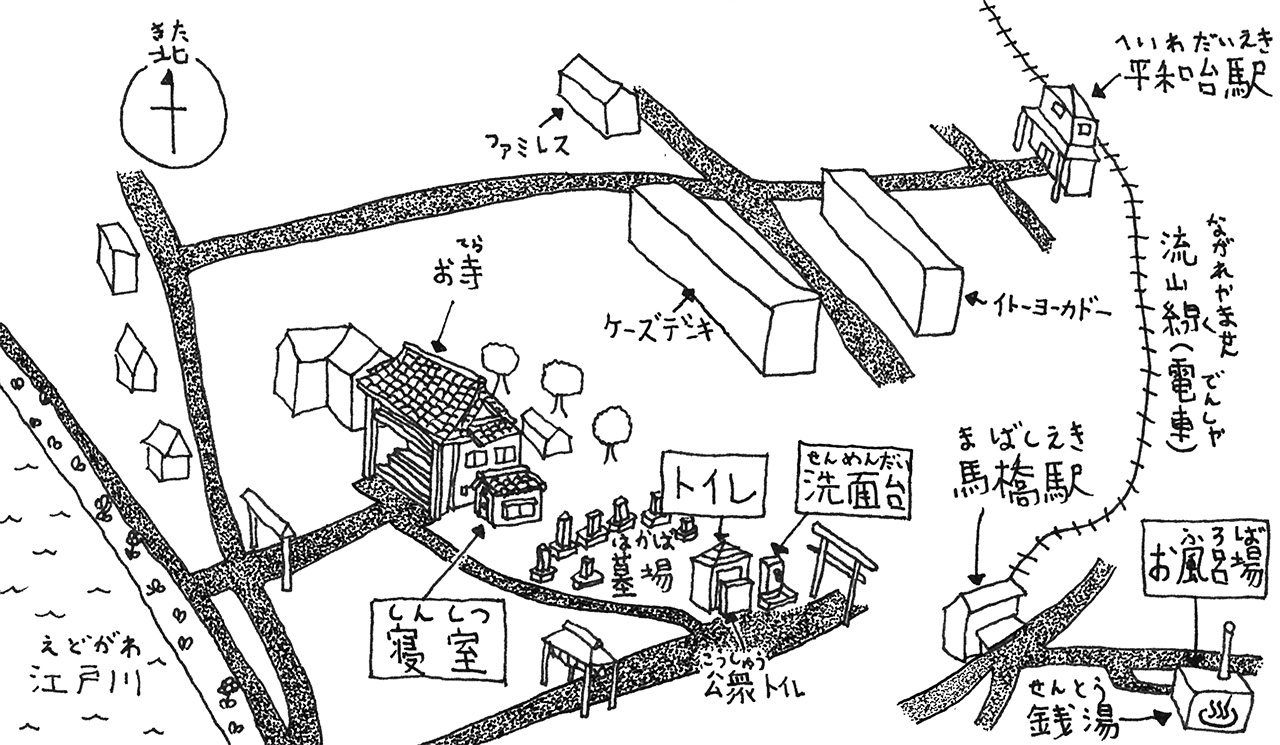 A “floor plan” drawn by Murakami. His house, labeled 寝室 (bedroom), sits beside a temple on the banks of the Edogawa in Chiba; nearby stores, restaurants, stations, and a bathhouse and public toilet are also marked.

Convenience stores or drugstores provide my toilet, and sentō or Internet cafés my bath. Cafés with electrical outlets are my study, and laundromats serve as my washing machine. It’s a different floor plan every time I move, and I find myself living in a huge house, several hundred meters square, rather than in my humble abode. 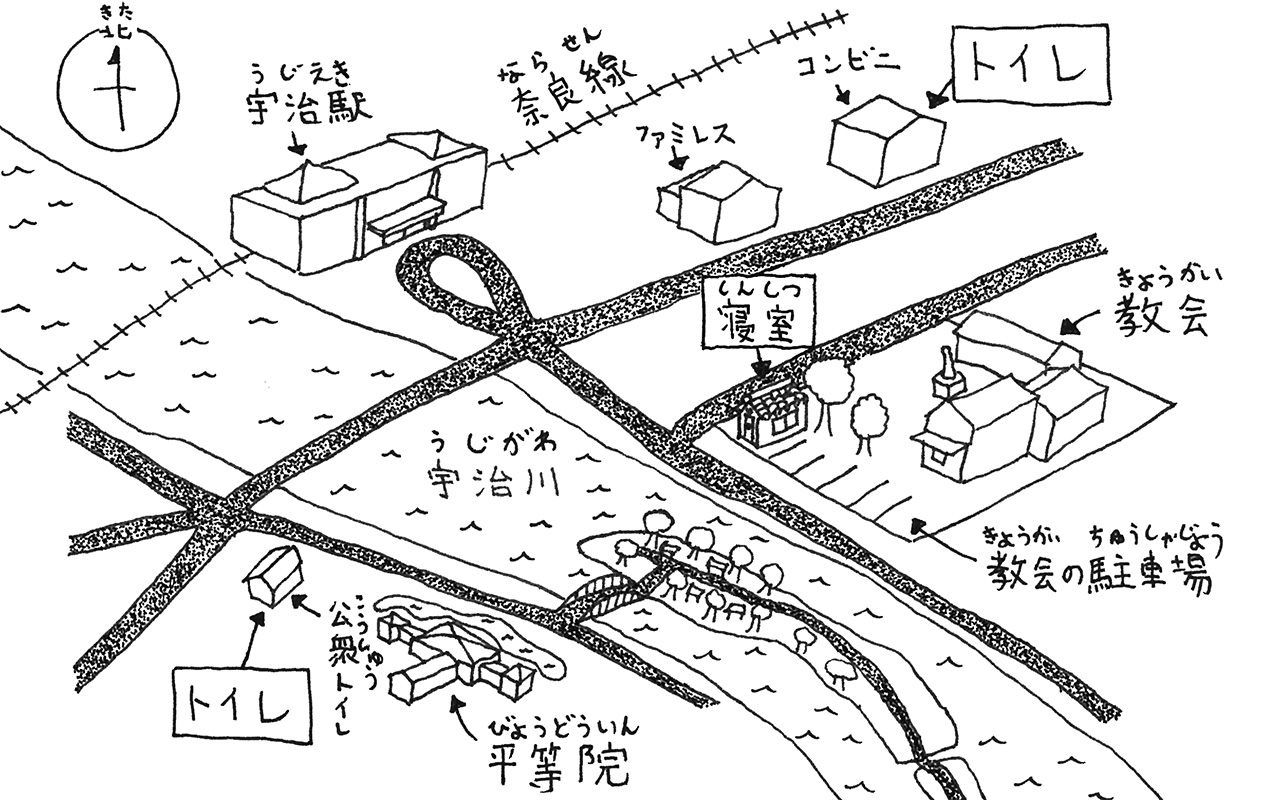 Another “floor plan.” Here his bedroom is set up on a church parking lot across the Uji River from the Kyoto temple Byōdōin. 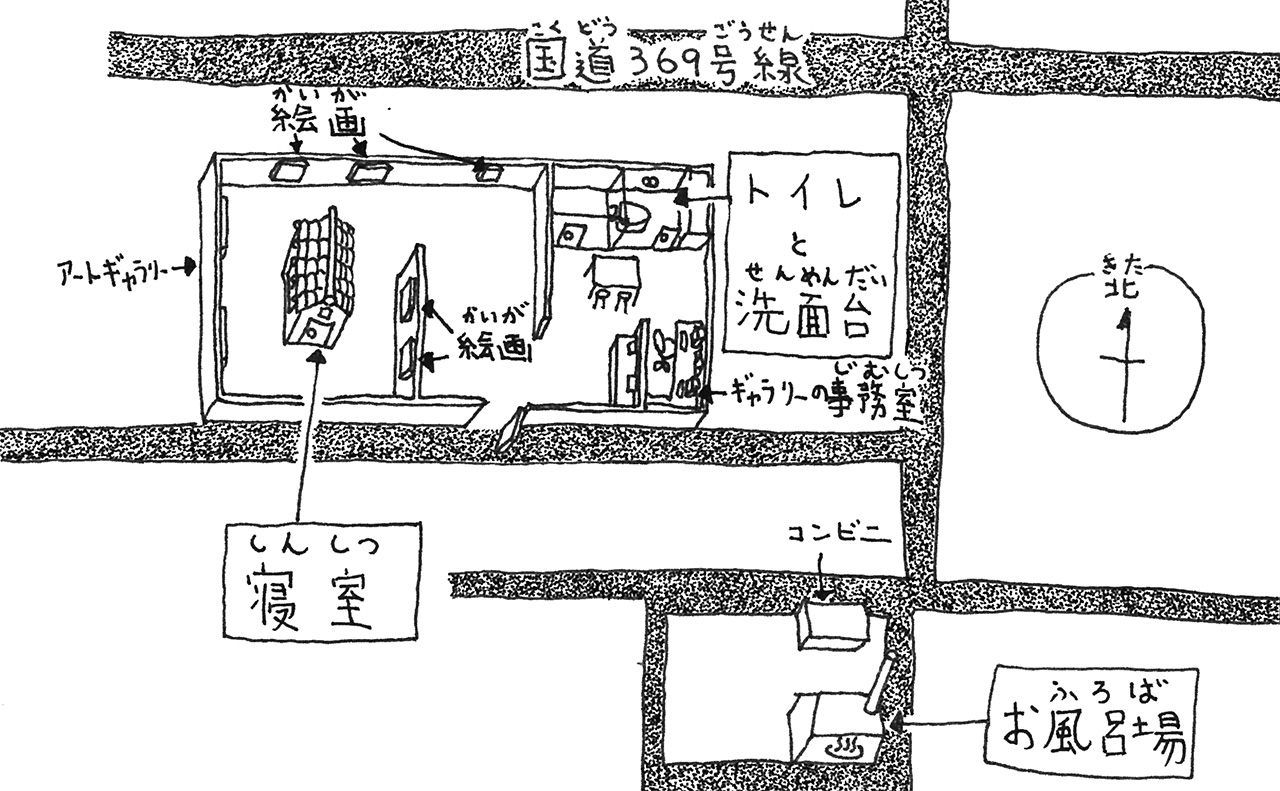 Here we find the “bedroom” set down inside an art gallery, handy to a convenience store and public bath, just south of National Route 369, running from Nara to Matsuzaka, Mie.

But I found that I needed money too, since you need to pay to use a café or a sentō. At first, I would pick up casual work wherever I went, just like the characters in the film Nomadland do. I washed dishes in restaurants or worked on construction sites. Lately, I’ve been getting more writing jobs and exhibition offers, so that’s how I earn my keep. 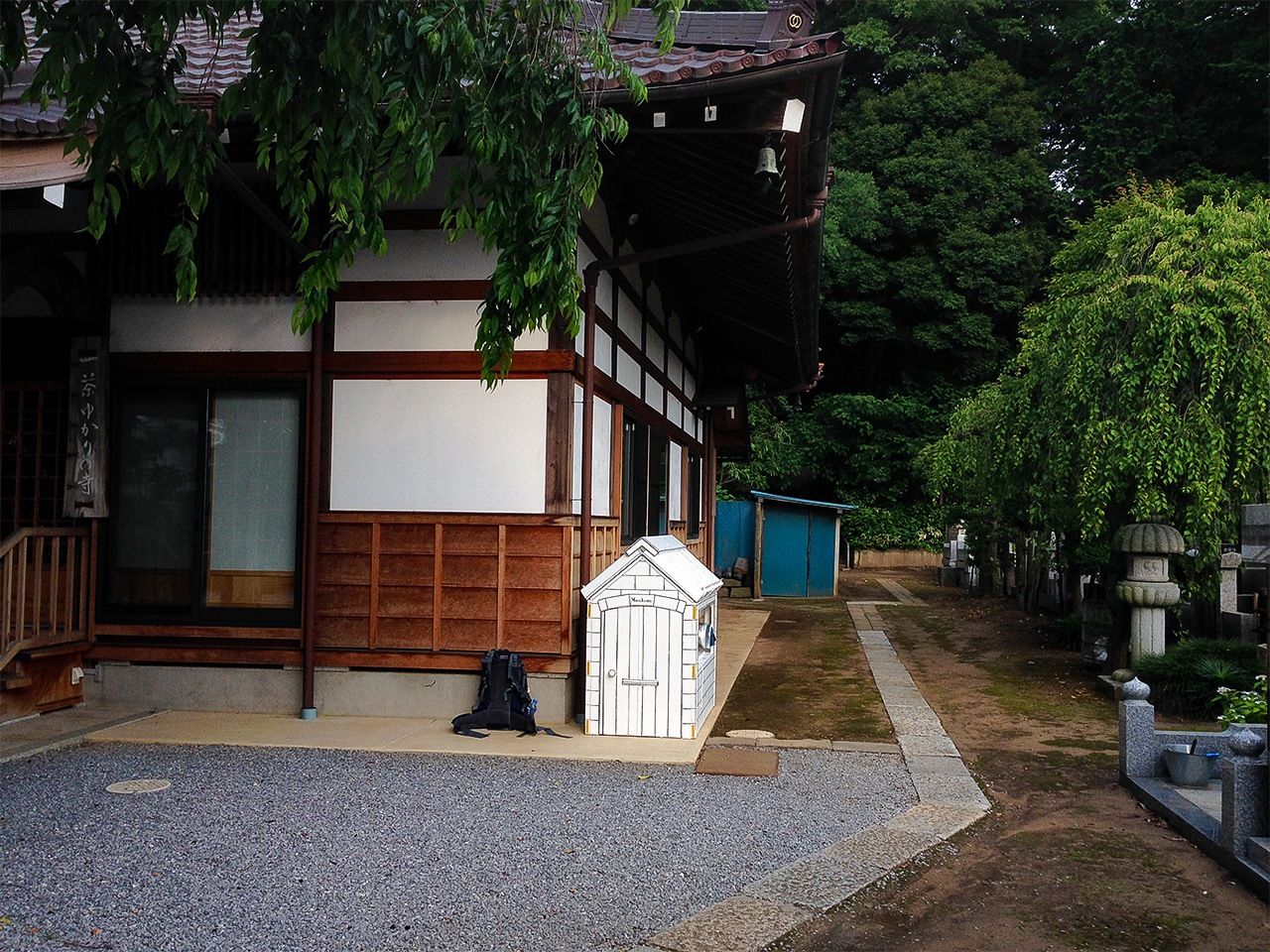 Before starting out on my travels, I hadn’t thought about how I would support myself. I had about ¥200,000 in savings, which I called my “starter funds.” I wondered what I would do when I had used that money up, but I felt that it was no use worrying. Given that my future self would have more lived experience than my present self, I decided to believe in my future self. 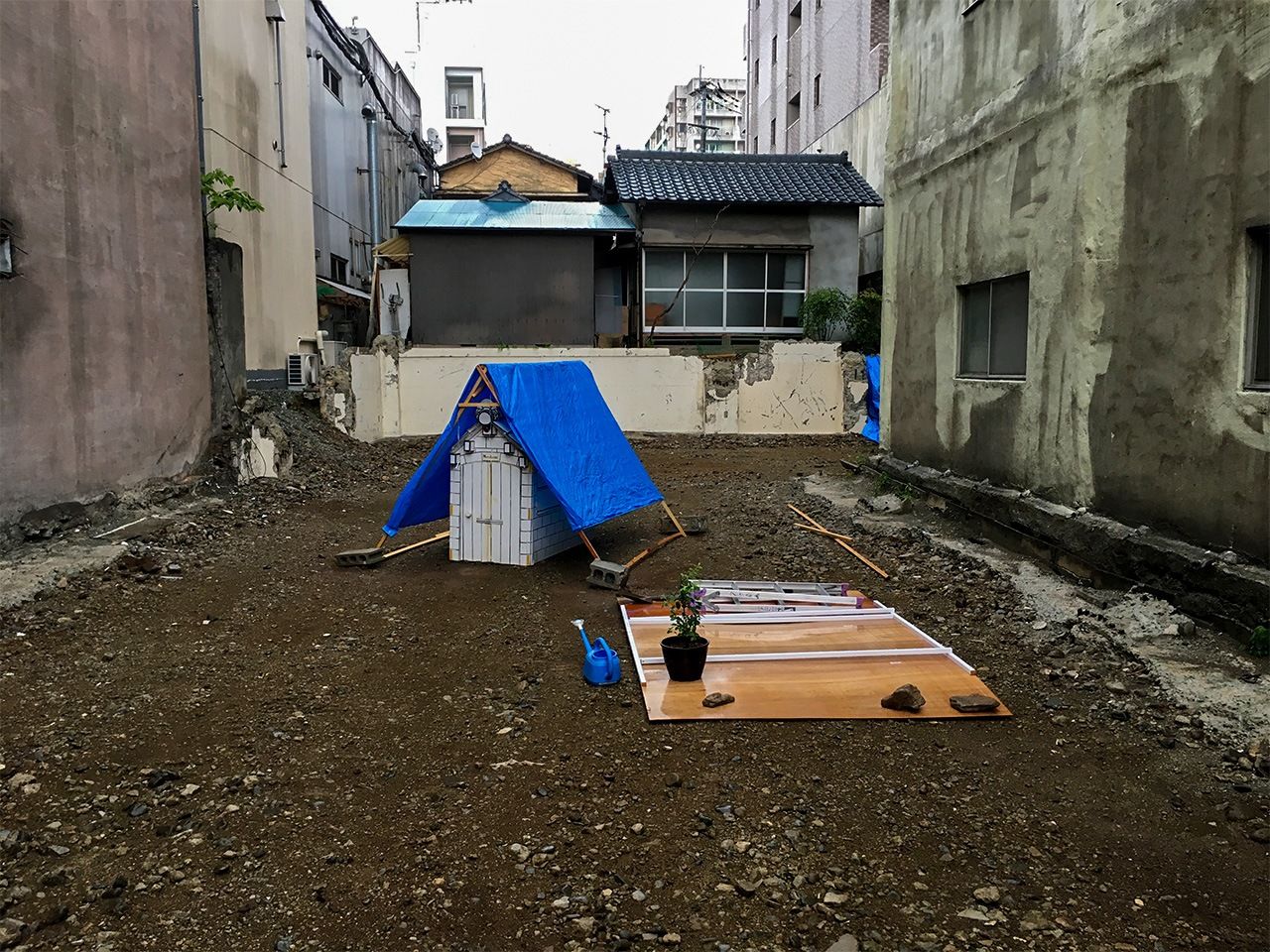 I became aware of several important things during my wanderings. For example, what is money for?

Since I was carrying my house and a backpack stuffed with clothing, I wanted to travel as light as possible. I needed food and water, of course, but those are heavy to carry around, so I wanted to obtain these only when necessary—that means using money. Five hundred milliliters of water can be had for ¥100, but whereas the water weighs 500 grams, a ¥100 coin weighs only 5 grams. Money is light; its essence is that you can exchange it for something heavy. The same goes for a shower or a washing machine. Obviously, those are too heavy to carry around, but you can swap money for a shower or for washing a load of clothes. 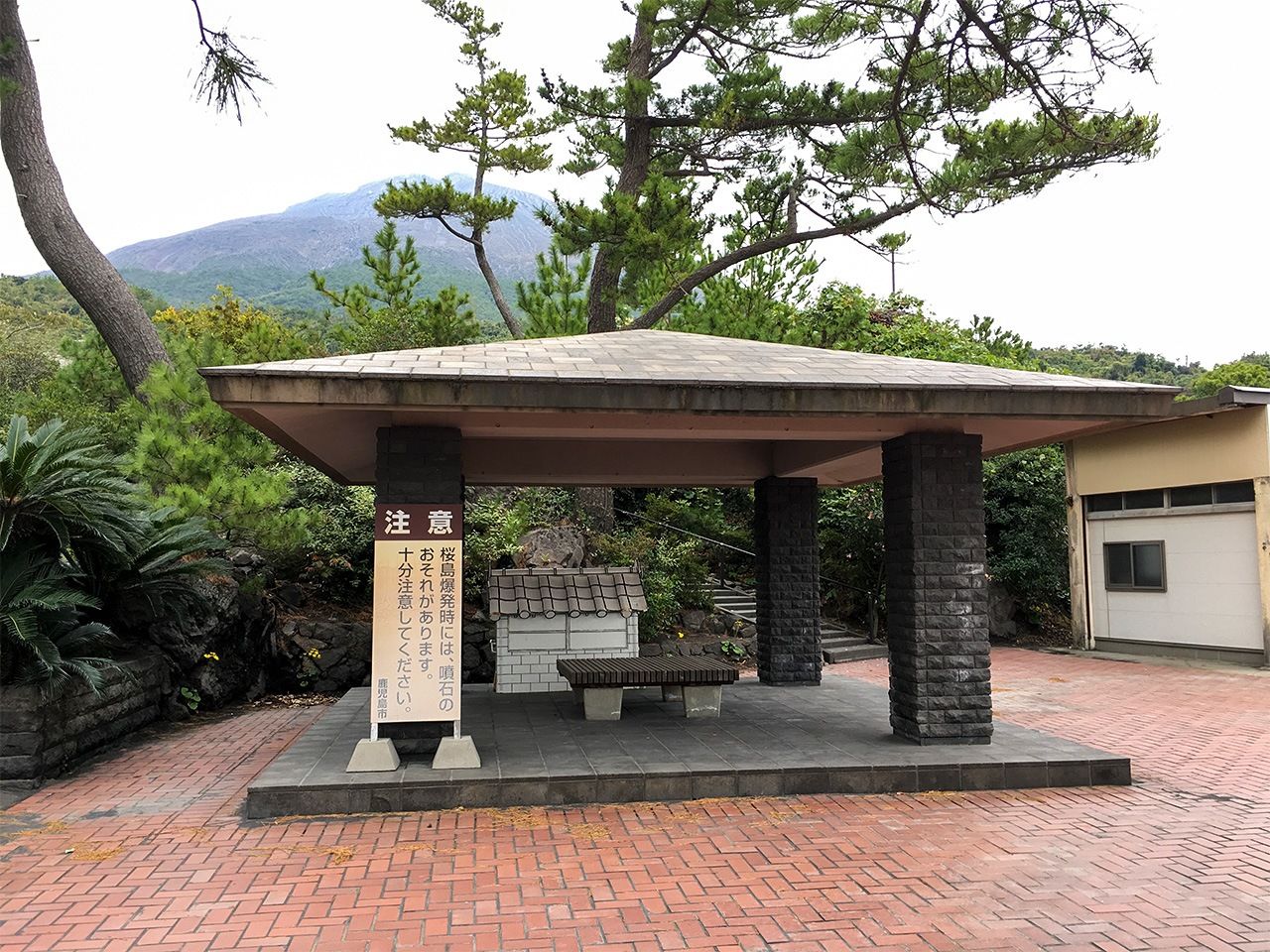 Next, I got to thinking about the role that land plays in our lives.

When I rented an apartment, I could take care of all my daily needs in my own neighborhood. Although I might occasionally leave it to meet up with friends, I was simply going to another neighborhood. I moved from point to point between neighborhoods, either driving or riding a train. If I was driving, I kept my eyes on the road; on the train, I fiddled with my smartphone, never giving any thought to anything outside the urban landscape. But tramping hundreds of kilometers through the country gave me a different perspective. Most of Japan consists of mountains, rivers, and shorelines. Only a small part of it is settled, about 5%, in my estimation. Even though I was occupying such a small sliver of the country, I never questioned that I was living here. I can’t believe I was so clueless. 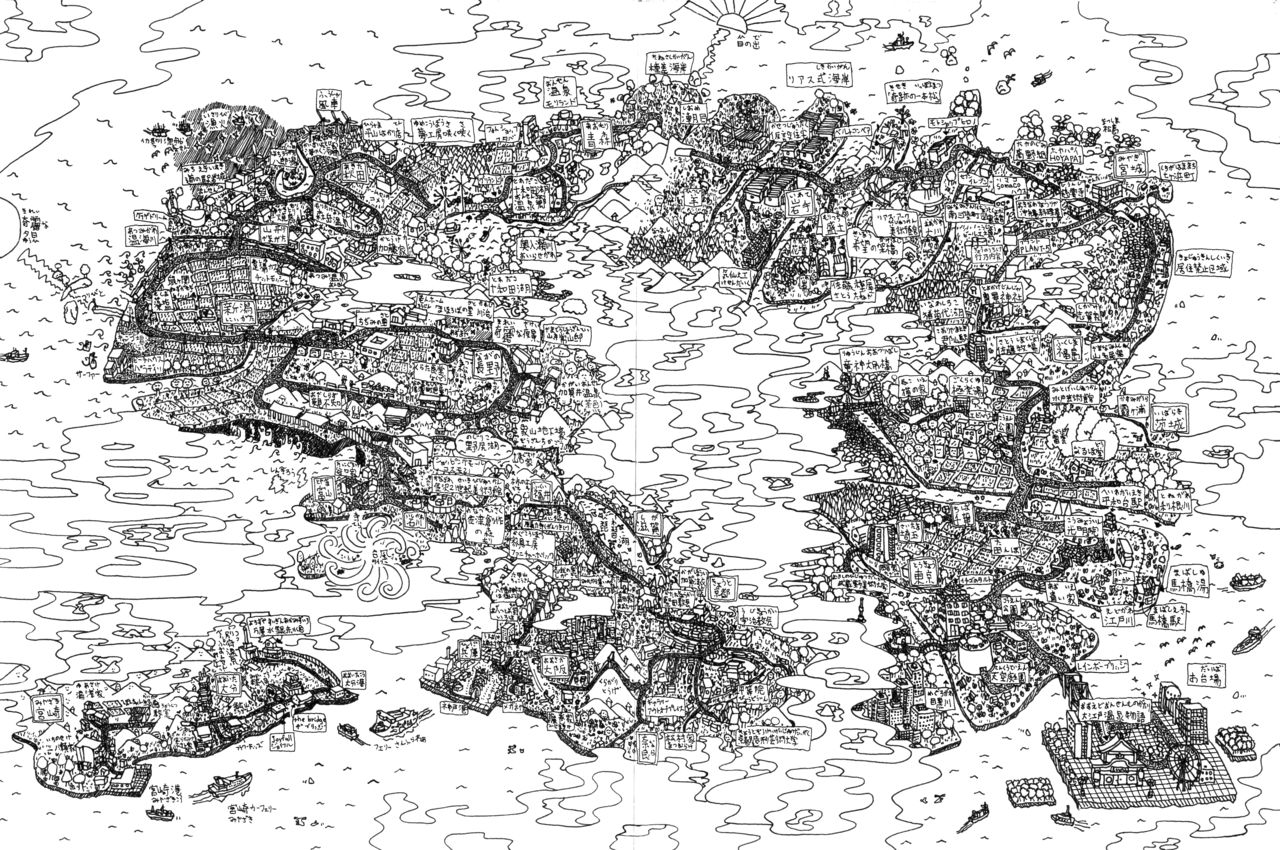 And what about the difficulties we inflict when we move about by car or rail?

Cars and trains are convenient. They’re also incomparably faster than walking. At the same time, they impose preposterous restrictions on the land, limiting its potential and dividing daily life into either “stopping” or “passing through.” Places with railways flourish; those without wither away. I’ve seen any number of the latter during my travels, their inhabitants complaining that life there is inconvenient. The thought that pride in their hometowns had been taken away by a train—a piece of machinery—made me very angry. 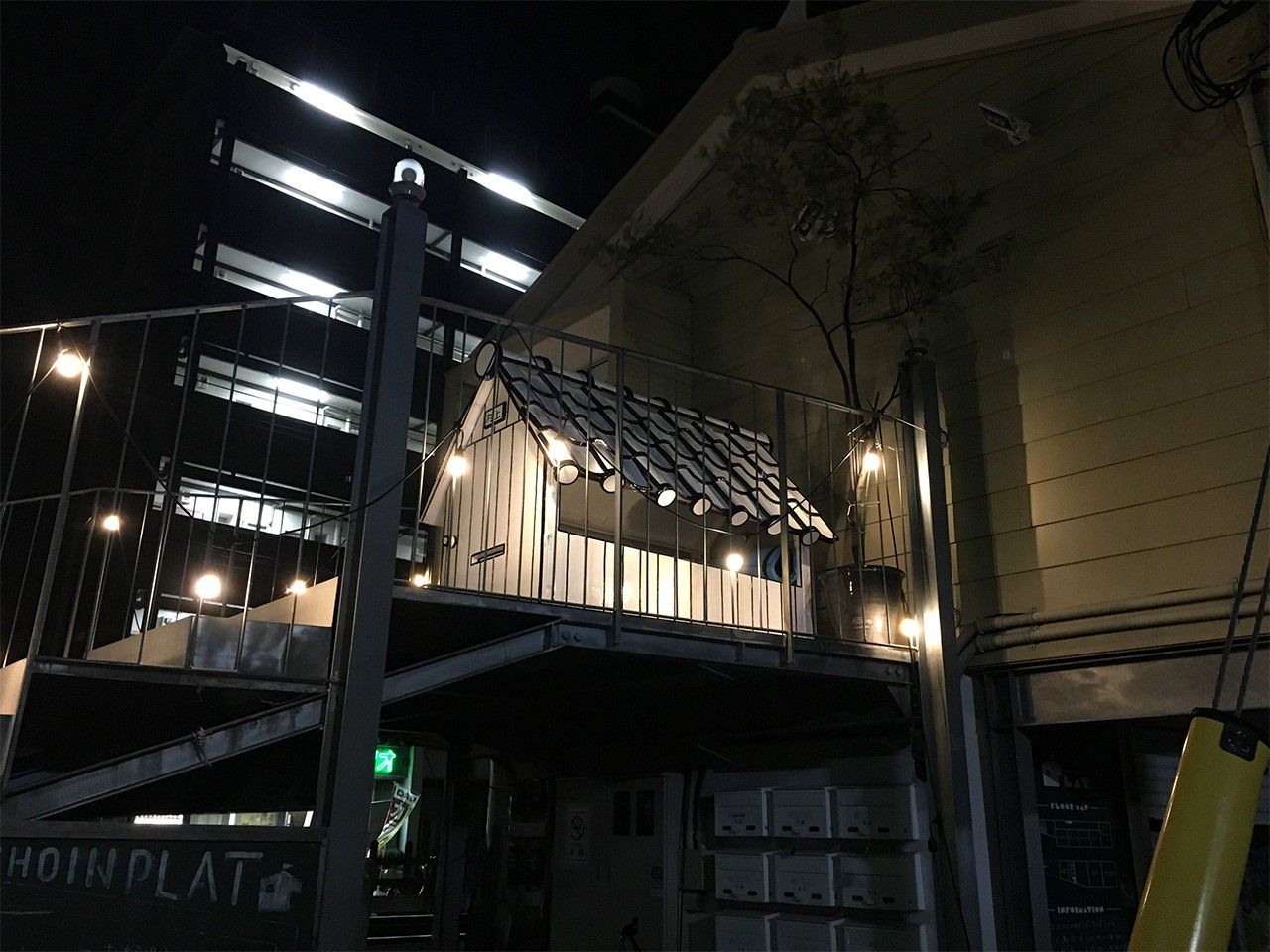 Everybody has a life, in some way, shape or form. Everywhere I go, I want to be able to shower. I also have to eat, go to the toilet, and have access to electricity. Wi-fi is nice to have, as are movie theaters, art museums, and department stores. In my life on the road, I search for amenities like that when I draw up my “floor plans.” I need to set up my house day after day, thinking that I might not have access to a shower, or that the toilet is far away. That takes a lot of time, and trying to organize my life like that every day keeps me busy. If I set up my house in the wrong place, I might not have access to food or a shower. Paying rent is an economic act that buys you the whole package in one place. It’s the same as buying time. 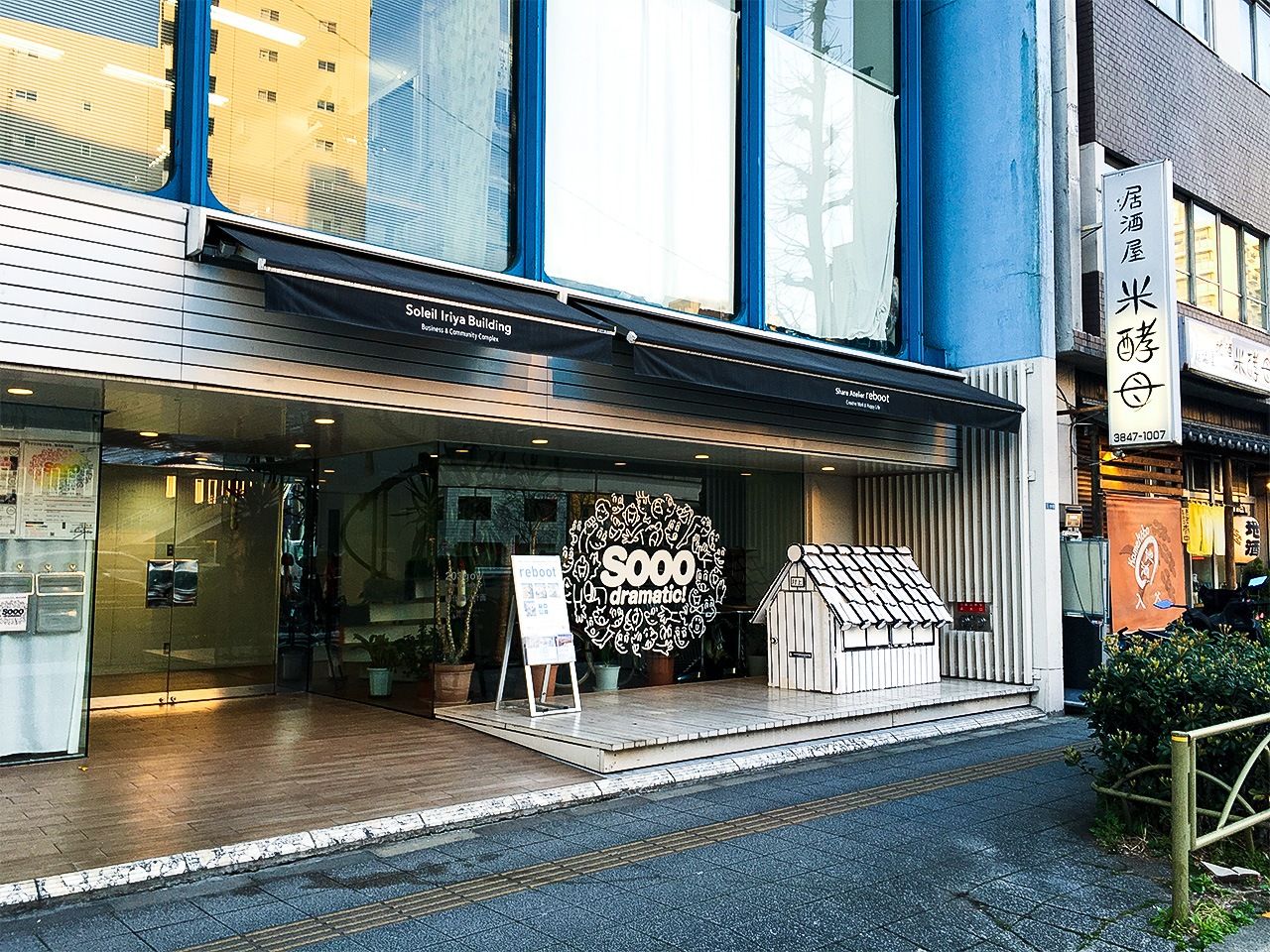 People sell their time when they work, and by paying rent, they buy time. Repeating this day after day has contributed to expanding capitalism. But this perpetual cycle of production and consumption has given rise to many ills, from nuclear accidents to train wrecks and pandemics. It’s hard to tell if we’re barely keeping our heads above water or whether we’re sinking down into the depths. 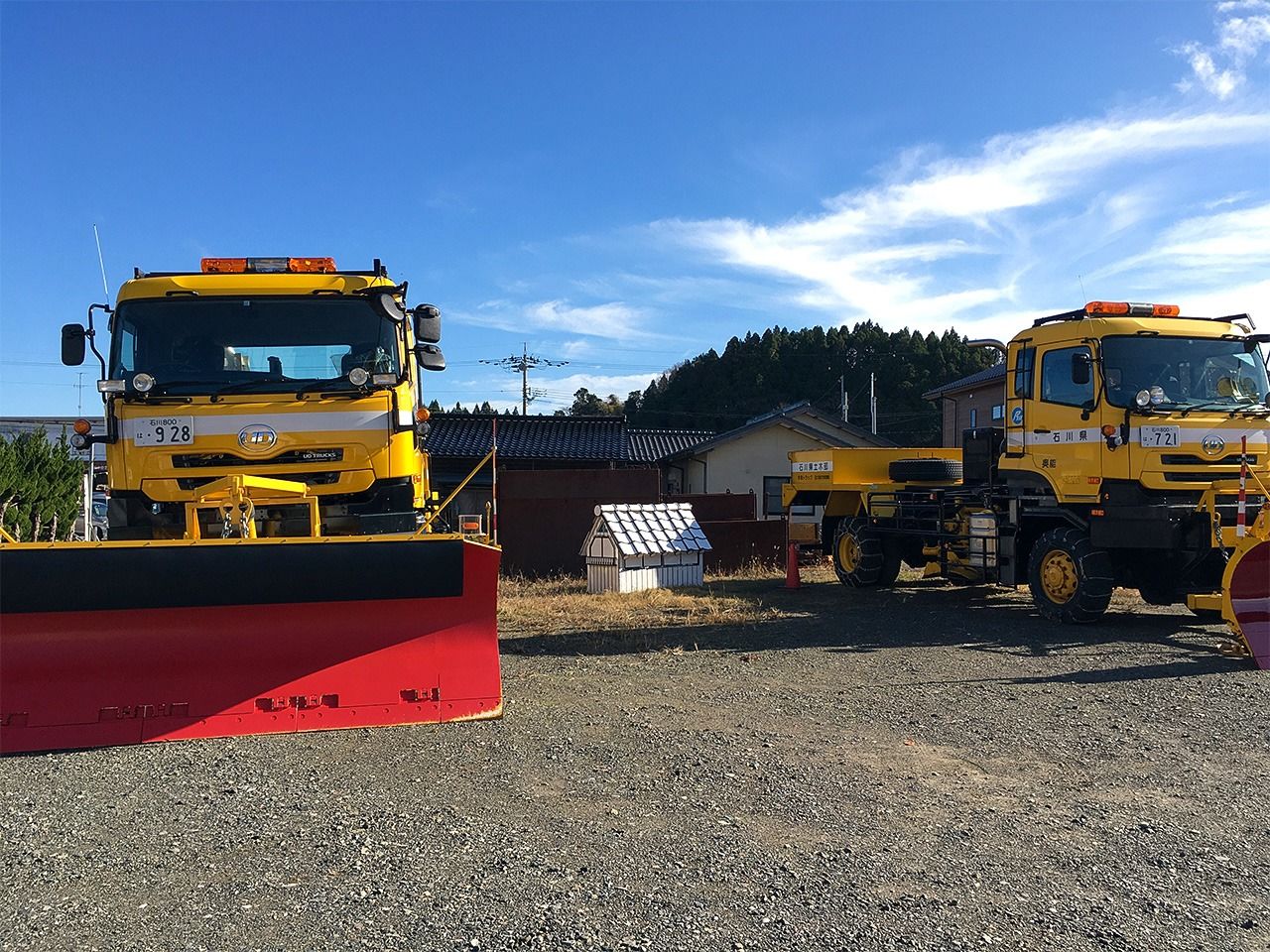 That leaves me no choice but to create a work of art. I don’t think that human beings should just idly drift through life. Yoshizaka Takamasa (1917–80), an architect I admire, said, “A house is an extension of the body, so having someone else build a house for you is a strange idea.” Living is a performance in its own right.

I’m currently based in a rented studio in Tokyo, adapting thoughts gleaned from my life on the road and preparing to create a new concept for living. I’m working right now on a plan to solicit advertising and using the income I earn from that to build a house out of the signs displaying those ads. I intend to create part of the energy used for daily living by using the heat from fermenting fallen leaves to heat my living space and the heat transfer from water evaporation to cool it. I’m continuing to experiment and I intend to keep performing my concept for living. 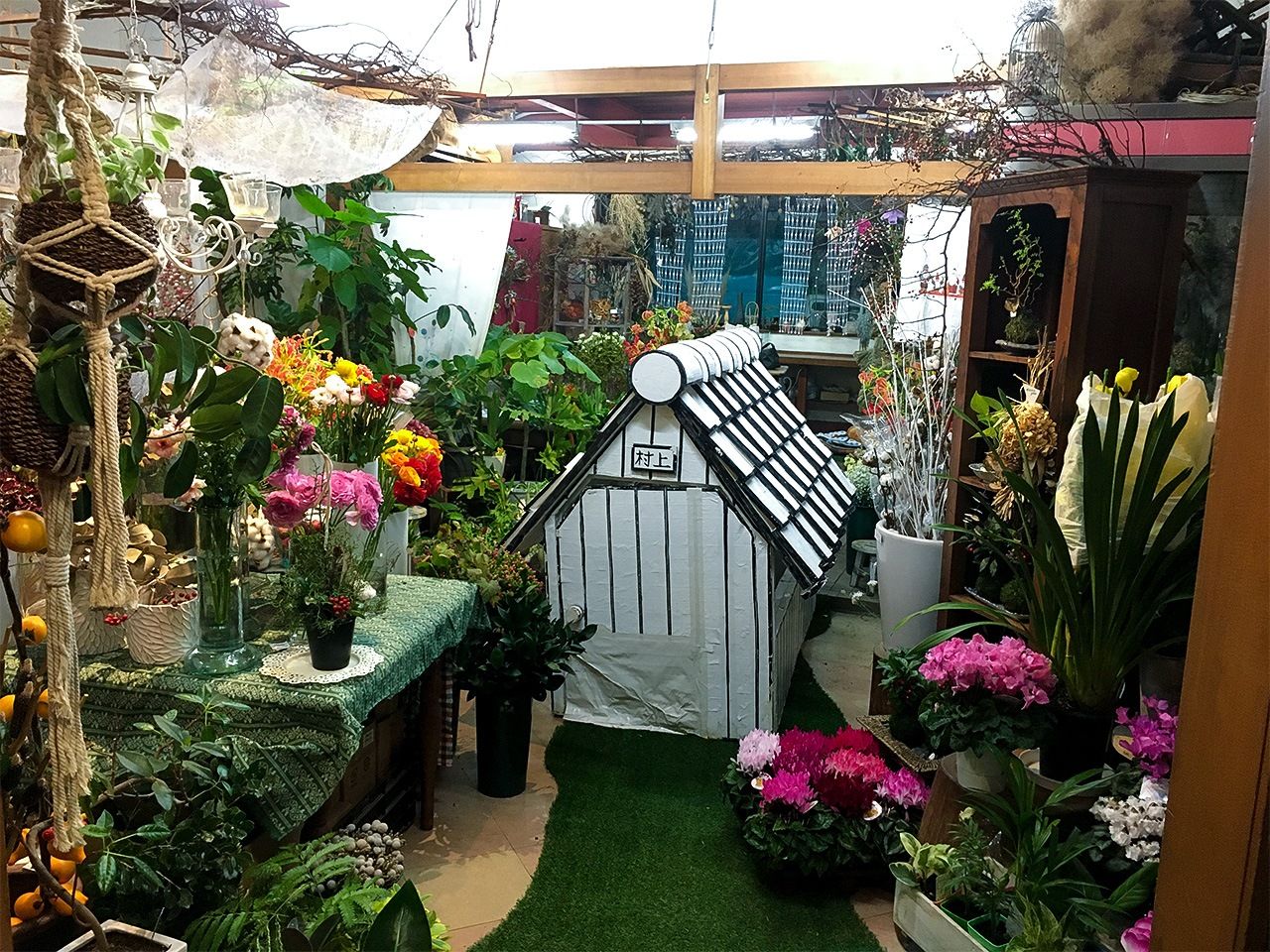