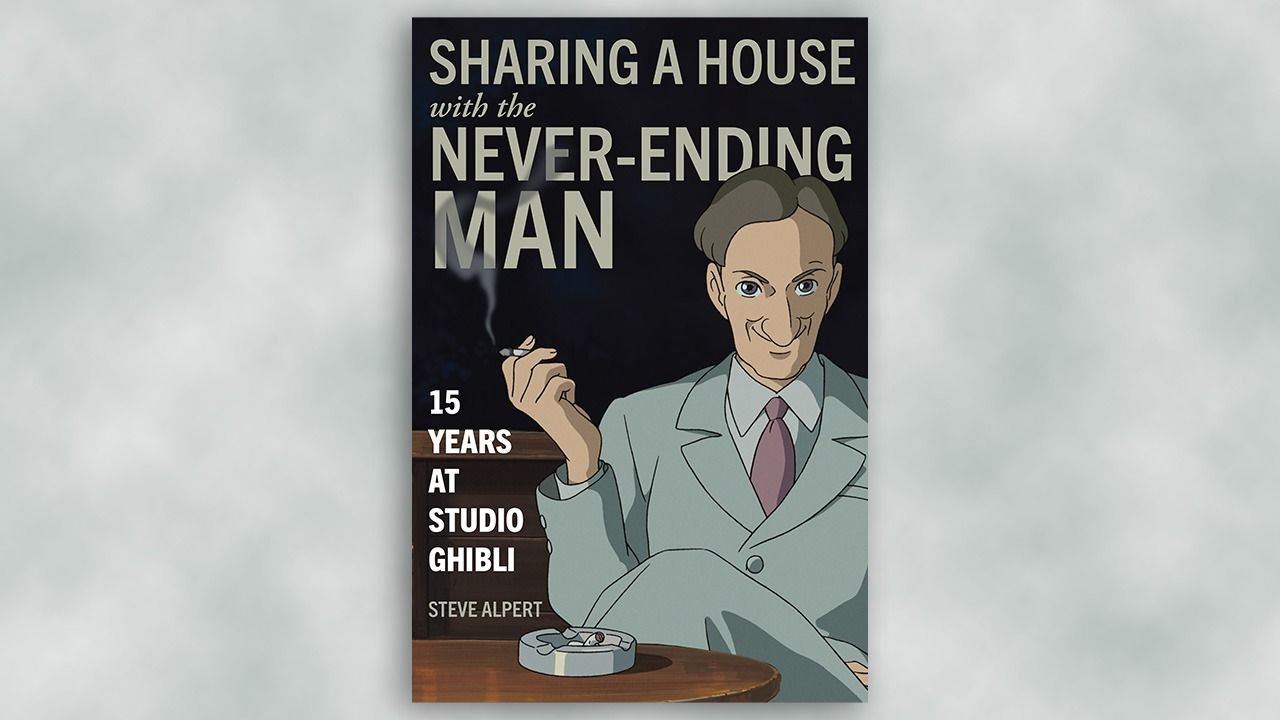 “Sharing a House with the Never-Ending Man”: An American at Ghibli

Culture Entertainment Jun 12, 2020
In a new book, Steve Alpert looks back on the years he spent working at Studio Ghibli trying to get Japanese hits like Princess Mononoke and Spirited Away a wider audience around the world.

In 1996, Steve Alpert joined Studio Ghibli during production of Miyazaki Hayao’s 1997 film Mononoke-hime (Princess Mononoke). His job for the next 15 years would be to get the legendary animation studio’s films distributed outside Japan. This brought some unexpected duties along the way, most notably when he stood in for Miyazaki at a number of major international award ceremonies.

His memoir, Sharing a House with the Never-Ending Man, focuses on the eventful early years of his time at the studio, when Miyazaki was winning global acclaim for Princess Mononoke and the 2001 Sen to Chihiro no kamikakushi (Spirited Away). The “never-ending man” in its title refers to Miyazaki, deriving from the phrase owaranai hito used by Ghibli producer Suzuki Toshio to describe him. As Alpert points out, the Japanese might also be translated as “the man who’s never finished,” a comment on Miyazaki’s perfectionism.

Along with insights into Miyazaki’s artistic outlook and personality, as well as the key role played at the studio by the business-savvy Suzuki, the book introduces the blustering, powerful Tokuma Yasuyoshi, the head of Tokuma Shoten Publishing, Ghibli’s parent company until 2005. Alpert also documents the constant culture clashes that arose between the Ghibli vision and business-minded distributors at Disney, as well as trips overseas with Miyazaki and Suzuki that often served as creative inspiration.

In a video interview, Alpert explained how he had got his job at the studio. He had been working in Tokyo for 10 years and was at Disney when he met Suzuki, who had come in a couple of times to talk about the possibility of the US company distributing Ghibli’s films. “Disney wanted to transfer me to Hong Kong. I didn’t want to go, so I quit and he offered me a job.”

As Miyazaki Hayao was hard at work on Princess Mononoke, Alpert did not talk to him much at first. “It was the last major film to be done on hand-drawn cel animation. So he was busy.” Alpert’s impression was that Miyazaki “did more on that film himself than anyone has ever done on a film.” Later, however, they spent more time together. “For a while we shared the same office. He would make me coffee, and if he was in the mood he would just talk.”

Alpert was there to witness awkward interactions between Miyazaki and Disney, such as when it bought up the rights to a children’s book he had mentioned. The story was about a boy, a mysterious monster, and a talking rock from outer space. “The boy lives on a small, dirt-poor farm with his grandparents, who are tough, nonverbal, and don’t openly show emotion or affection.” By the time Disney pitched it back to Miyazaki, asking him to codirect, the monster had become an elf, the talking rock contained a fairy princess, and the boy had an openly loving aunt and uncle. Miyazaki politely declined. 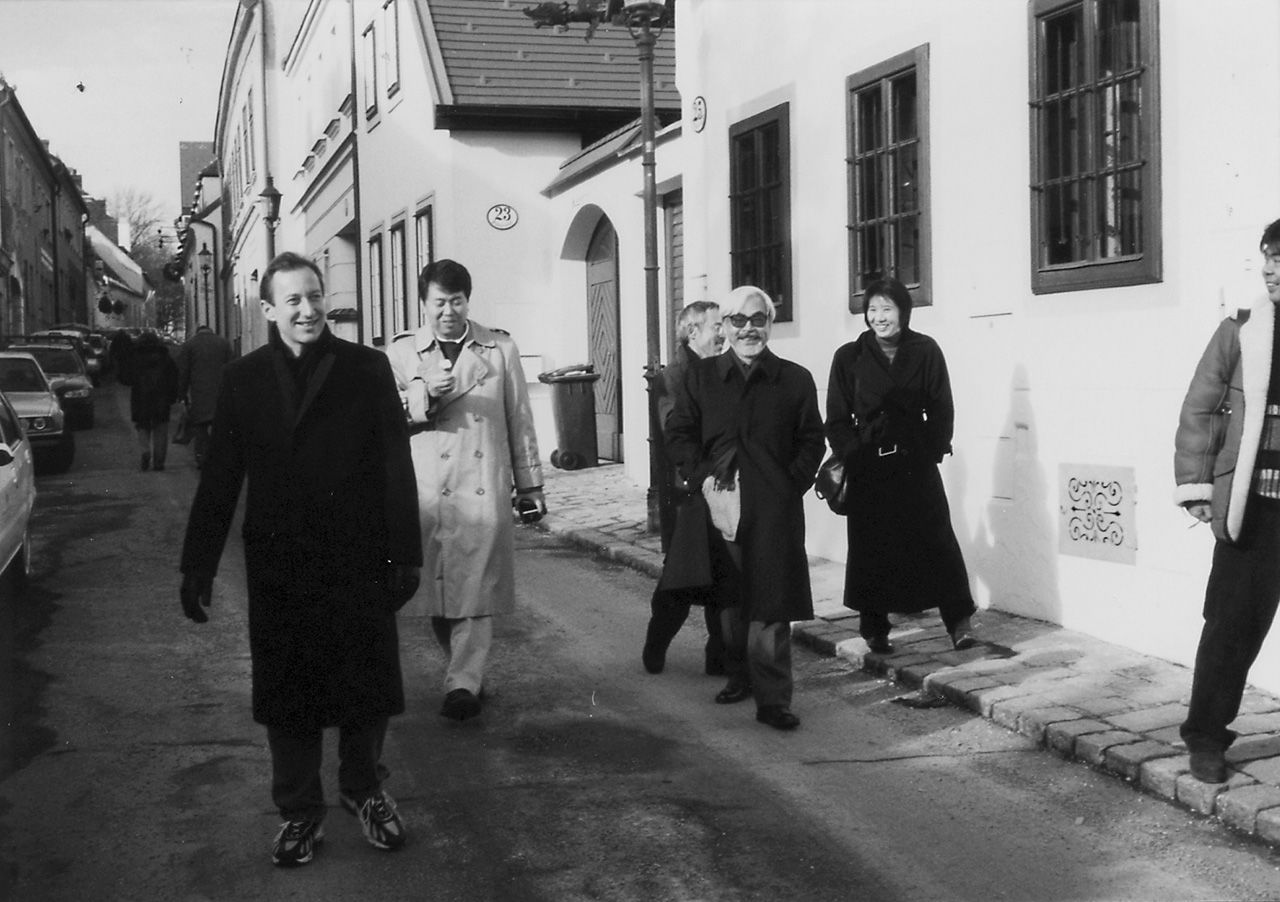 Steve Alpert (left) with Miyazaki Hayao (fourth from left) and Suzuki Toshio (third from left) in Vienna in 1998 before Princess Mononoke appeared out of competition at the Berlin International Film Festival. (Courtesy Steve Alpert)

Another memorable example of differences between the details-oriented Ghibli creative team and Disney marketers occurred in discussions of the 1998 US release of the 1989 Majo no takkyūbin (Kiki’s Delivery Service). Suzuki asked the marketers why they made Kiki left-handed in their visuals. He went on to explain that in the film the young witch was always using her stronger right hand to hold on to her flying broom for dear life. In the Disney art, she did not seem to be holding on at all. “How did you think she managed to fly the broom?” A marketer finally piped up, “How she flies the broom? It’s magic. It’s just magic and it flies. It’s m-a-g-i-c.”

Brushing Shoulders with the Stars

When Spirited Away won a string of awards in 2002–3, Alpert was called on to collect most of them. After he ended up accepting the Golden Bear at the Berlin International Film Festival as Miyazaki did not want to, it became a kind of superstition for the studio. Thus, Alpert repeatedly brushed shoulders with movie stars, although he was not allowed to accept the Oscar for Best Animated Feature under the Academy’s rules. In the video interview, Alpert commented ruefully, “I always thought at least they should have somebody Japanese up there.”

Alpert feels there is sometimes too much emphasis on anecdotes about Miyazaki and not enough on what makes him a great artist. “He’s so good at deciding exactly which images to use to make a story. His sense of timing is amazing. It’s like a visual jazz musical performance, his ability to balance elements, where to place the camera, how long to take it, when to go up and when to go down, when to go to the side. He’s like a maestro who can also play all the instruments.”

Sharing a House with the Never-Ending Man provides a unique insider view of the Ghibli phenomenon from an American perspective. At a time when anime has become part of the cultural mainstream around the world, it also offers a reminder of when it was regarded with deep suspicion by US marketers, who did not think audiences would accept it. 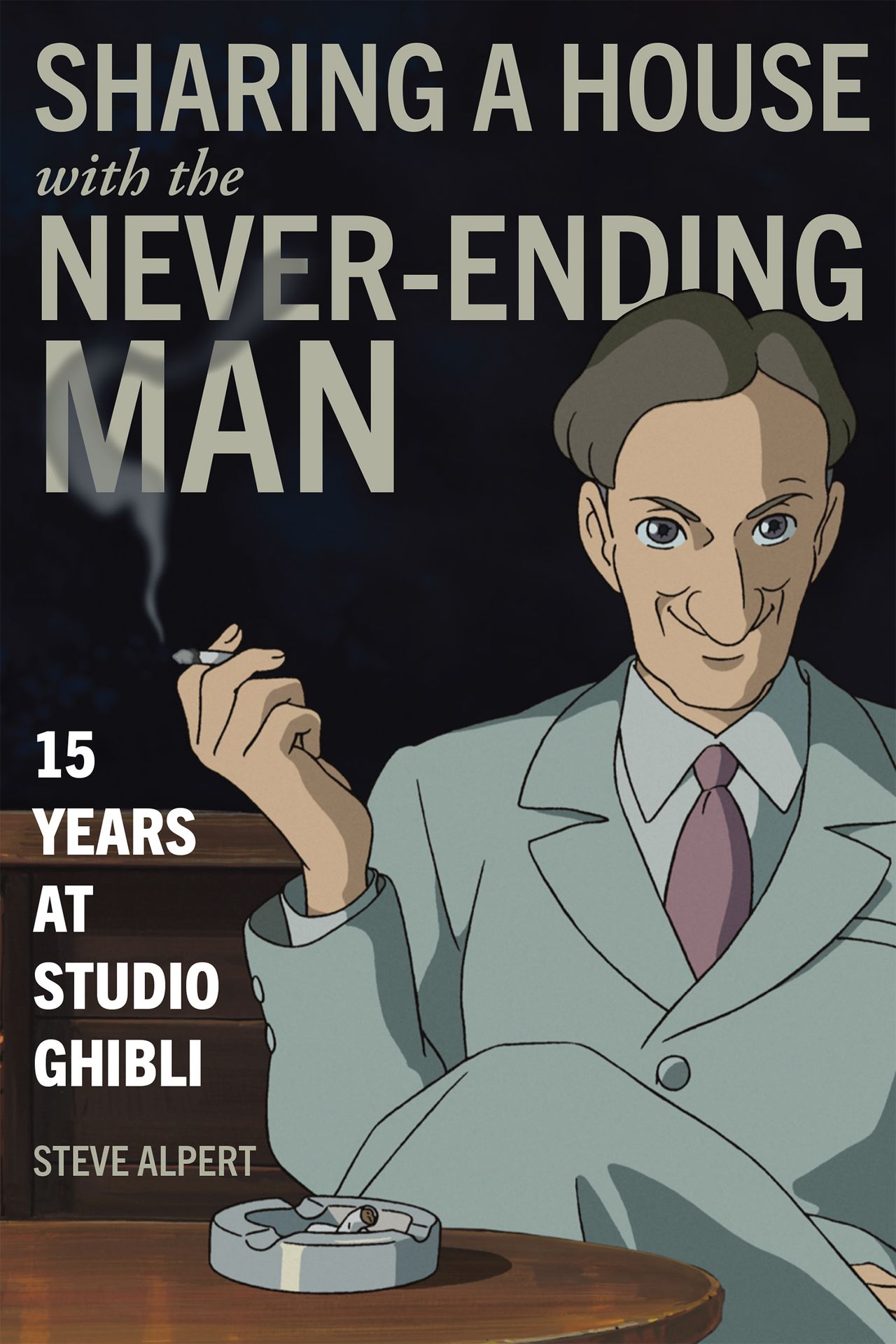 Sharing a House with the Never-Ending Man: 15 Years at Studio Ghibli by Steve Alpert is published by Stone Bridge Press on June 16, 2020.

(Originally published in English. Banner image: The cover of Sharing a House with the Never-Ending Man showing the character Kastorp from The Wind Rises; his appearance is based on Steve Alpert.)