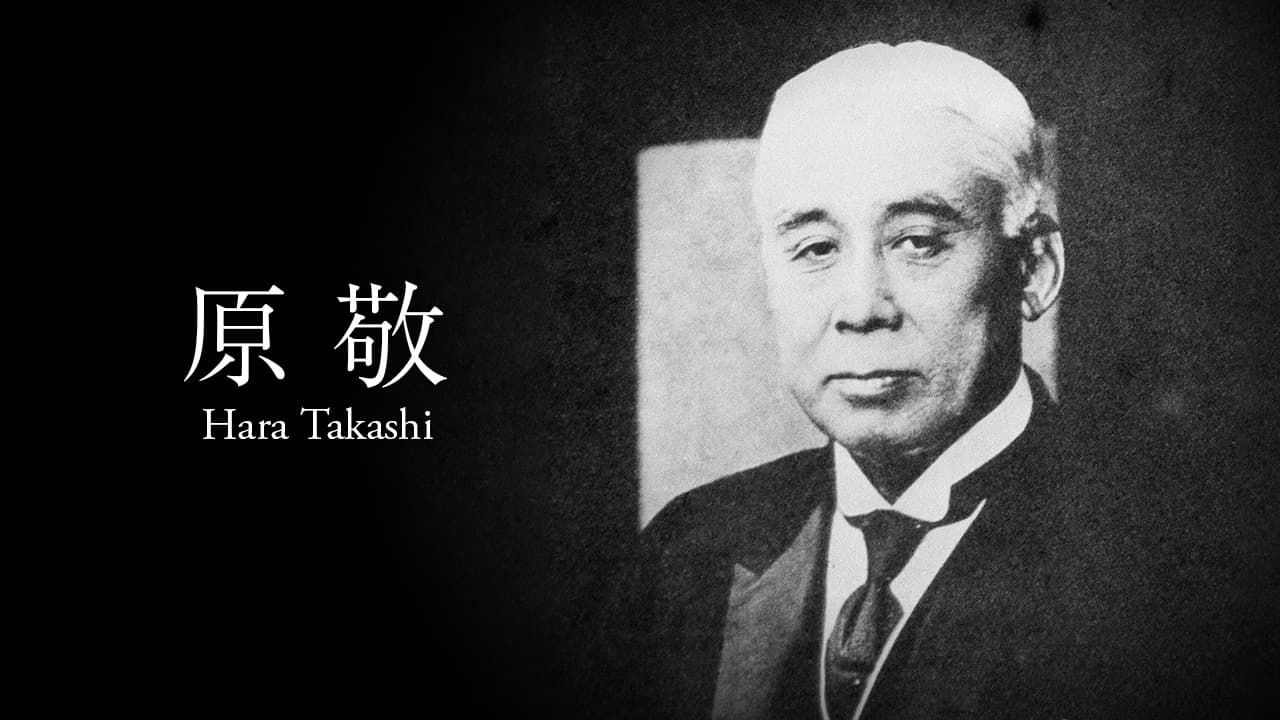 Hara Takashi: The Outsider Who Became Leader of Japan

Politics History Nov 30, 2021
Hara Takashi was the first Japanese prime minister not from the aristocracy, and the first to appoint a cabinet largely consisting of elected politicians. In the years after World War I, he implemented influential policies in education and transportation, but was assassinated after three years in office.

Hara Takashi became prime minister of Japan in September 1918, shortly before the end of World War I. At the age of 62, he headed the country’s first full-fledged “party cabinet,” defined as consisting mainly of elected Diet members—rather than unelected statesmen, as had been typical previously. While leading Japan’s adjustment to the new postwar order, he was assassinated on November 4, 1921. This year marks the hundredth anniversary of his death.

Born the son of a high-ranking samurai in the domain of Nanbu (now Iwate Prefecture) in 1856, Hara was greatly influenced in his formative years by his mother Ritsu and by the Meiji Restoration of 1868 . In the Boshin Civil War, Nanbu was on the side of the shogunate, like other domains in Tōhoku, and was defeated by the forces of the new Meiji government, meaning ruin for Hara’s family. His father died young, so his mother became the center of the family. When the domain required payments from its retainers to raise money for reparations to the Meiji government, Ritsu sold most of the household goods to faithfully provide them. At the start of the Meiji era (1868–1912), the idea spread of rising in the world through one’s own efforts, and despite her family’s poverty, she was fervent about giving her children a good education, encouraging Takashi to be honest and hardworking.

Hara had a lifelong dislike of factions, emphasizing independence and meritocracy in his assignment of positions. This was likely a reaction against the domination of the Meiji era government for more than 30 years by politicians from the domains of Satsuma and Chōshū (now Kagoshima and Yamaguchi Prefectures), the architects of the Meiji Restoration.

From the age of around 20, Hara learned French for two and a half years at the law school of the Ministry of Justice, although he left without graduating. His ambitions in politics and diplomacy led him to study the French state and language at a private school established by Nakae Chōmin, a leader in the Freedom and People’s Rights movement. Under Chōmin, he learned about the thinking of Jean-Jacques Rousseau, and had the idea of acting for “the common good” drummed into him. He also understood the gradualism of accustoming citizens to the operation of politics in order to popularize the idea of people’s rights. This spirit of the common good deepened the values his mother had taught him.

After this, Hara spent around three years working at the Japanese legation in Paris, where he polished his French-language skills, and studied international law and European politics and culture. After returning to Japan, from 1890 he spent some seven years working under Mutsu Munemitsu, who was minister of agriculture and commerce and then foreign minister. Mutsu was from the domain of Wakayama (now the prefecture of the same name), so not a part of the Satsuma-Chōshū clique, and Hara came to highly esteem him. Hara had already grasped that shifts in strength among Japan, Qing China, and the great powers of the West had considerably transformed the international environment in East Asia, and understood the related interests involved. He saw the importance of ensuring Japanese security through consideration of the balance of power. Mutsu appointed Hara in various roles at the foreign ministry, including vice-minister. By observing Mutsu’s handling of diplomacy and domestic politics, Hara learned a practical approach to turning vision into reality.

After leaving the foreign ministry in 1897, Hara joined the Ōsaka Mainichi Shimbun at Mutsu’s recommendation. The following year, he became manager of the newspaper. As Western countries moved to expand their influence in China after the Sino-Japanese War of 1894–95, Hara maintained a firm stance through the newspaper that peace could be achieved through the balance of power among these countries, and he tripled circulation.

In 1900, Hara joined the political party Rikken Seiyūkai (Friends of Constitutional Government), founded by Itō Hirobumi. He was elected as a lawmaker in the 1902 election in the Morioka constituency in his native Iwate Prefecture, where he emphasized the need to watch changes in the international environment, and to work hard to match Western countries. He also said that it was not only politicians that had a duty to the state, but that people in any kind of job, even if they were not able to vote, should regard the state as important. Before the outbreak of the Russo-Japanese War in February 1904, as a leading Seiyūkai officer, he exhorted the party to curb its emotive, anti-Russian attitudes.

Hara spoke about the importance of the state in an age when the great powers were continuing to divide up the world. However, he thought the state should reflect the views of many citizens rather than the few members of the Meiji oligarchy. This is why he did not try to win votes through pork-barrel policies like constructing railways and roads, but even so he received continued support from his constituents.

From around 1907, there was a change in Hara’s thinking in that he started talking about citizens’ welfare, including being able to enjoy peace, rather than the collective interest of the state. This may have been because Japan’s victory over Russia dissipated the sense of crisis over its security. After serving as home minister under Prime Minister Saionji Kinmochi, in August 1908 Hara set off at his own expense for some six months of observation in Europe and the United States. During this journey, he was the first of Japan’s statesmen to realize that the United States would take over from Britain as the world’s leading power.

When World War I broke out in August 1914, Japan sided with the Allied Powers. The United States also joined the Allies in 1917, which finally won the war in November 1918, after millions of deaths. In the autumn of 1917, Hara, now the leader of Seiyūkai, talked of his vision for Japan’s foreign relations and internal administration after the war. A few months later, US President Woodrow Wilson announced his Fourteen Points as an ideal for the postwar international order. They were highly influential, contributing to the formation of the League of Nations after the 1919 Paris Peace Conference.

Hara’s agreement with Wilson’s views led him to focus on cooperation with the United States, shifting significantly from the previous strong alignment with Britain. As prime minister, Hara also moved to withdraw Japanese troops from Siberia, where they had been sent in 1918 as part of Allied efforts to oppose communist forces in the Russian Civil War. Incidentally, from around 1919, Hara began writing in calligraphy the Zen word hōjaku, meaning “to do good without expecting reward.” Having taken on the responsibility of prime minister in September 1918, he may have seen the word as carrying his hopes for an improved postwar order both domestically and internationally.

At the time of the Paris Peace Conference, however, it was unclear how Wilson’s principles of self-determination would be applied. At the conference, there were calls for Japan to return the Shandong concession it had captured from Germany during the war, as China was also on the Allied side. The United States supported China, but Japan won the backing of Britain and insisted on maintaining the concession. Hara bore in mind that imperial values still lingered both domestically and internationally, and decided to preserve the appearance of Japan controlling the concession for a time, but thought to return most of it to China on viewing how the new order developed. Two and a half years later, the two countries agreed that most would be returned for a small payment.

Hara did not, however, apply the principle of self-determination when the March First Movement took place in the Japanese colony of Korea in 1919. Instead, he criticized and suppressed the demonstrations. He had seen potential in Korea from before the Sino-Japanese War, but maintained that at this point it was not yet able to become a modern, independent country. He also gave the reason that Wilson’s self-determination was only initially intended for Europe. Hara was similarly critical of China’s anticolonial May Fourth Movement, regarding it as a radical campaign that began under the influence of the Russian Revolution and Marxism and was opposed to the international order.

After World War I, disarmament movements among the major Western powers put the focus on economic competition, rather than military rivalry. Observing this, Hara instituted reforms, limiting unnecessary military expansion to invest in education, transportation, and communications, with the aim of boosting industry and culture. For example, he opened up higher education through the promulgation of an ordinance that laid the way for the establishment of many universities to stand alongside the imperial universities. This was when institutions like Keiō and Waseda were formally recognized as universities. He also created a framework for enhancing rail connections through connecting branch lines and roads with the main rail network. This policy supported Japan’s railways for almost 40 years, until reform became necessary in the high-growth period of the 1960s.

On November 4, 1921, Hara was on his way to board a night train to Kobe to attend a Seiyūkai meeting in Kyoto when he was stabbed in Tokyo Station. There were rumors that right-wing groups supported the young man who assassinated him, but the truth remains unknown. Around this time, politicians and the imperial court were at odds over the engagement of Crown Prince Hirohito (later Emperor Shōwa), which Hara was moving secretly to block, so animosity from the right may have been connected to his death. 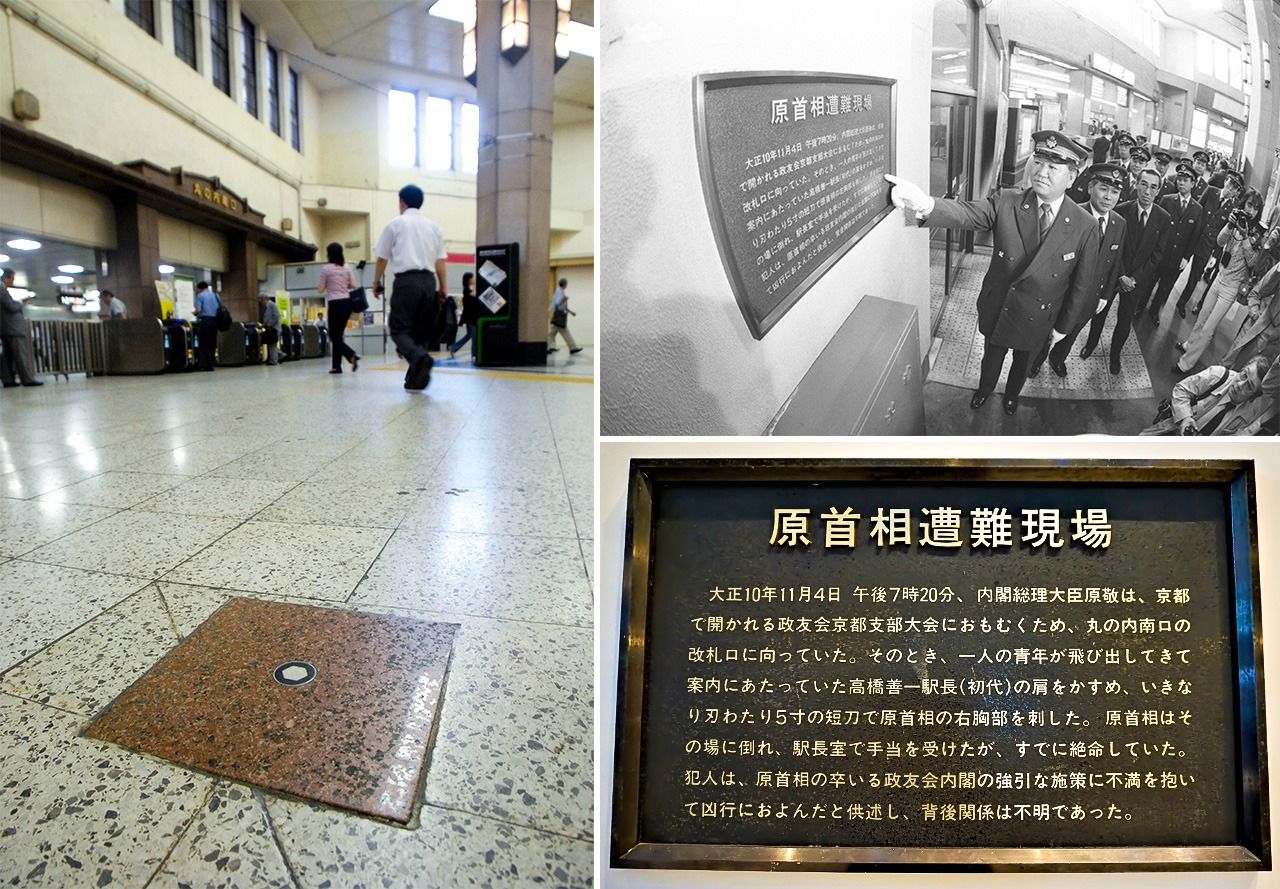 A tile in Tokyo Station (left) marks the spot where Hara Takashi was assassinated, and nearby there is a memorial plaque. (© Jiji; © Pixta)

If Hara had lived, he might have acted to rein in the influence of the militarists as an advisor to Emperor Shōwa, and even prevented war with the United States. His death, however, formed part of a major shift in Japan’s path through the modern era.