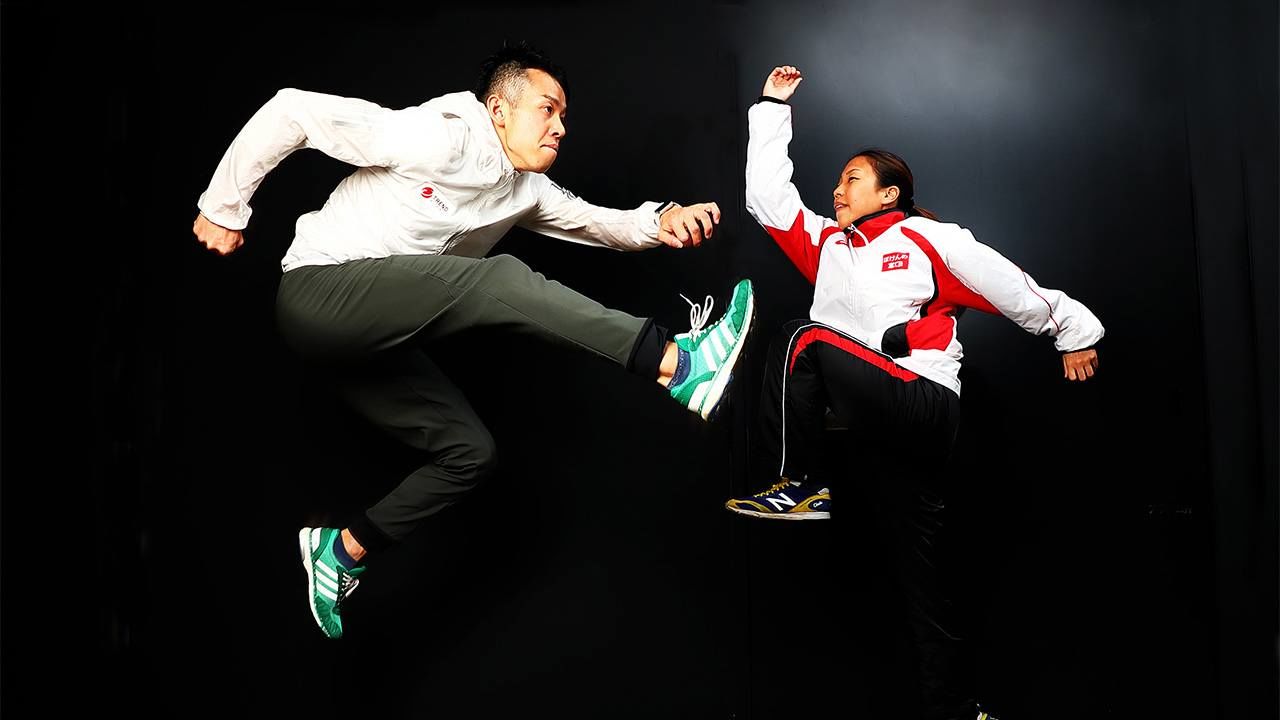 People Society Mar 19, 2020
Para long jumper Takada Chiaki and her husband, the deaf hurdler Takada Yūji, are partners and rivals in their race to the medal stand. 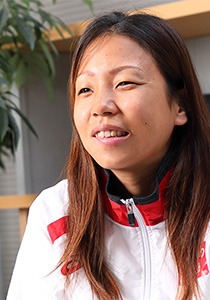 Born in Tokyo in 1984. Visually impaired para athlete and member of the Japanese national athletics team competing in the T11 class. Holds the Japanese record for the women’s long jump and the 100 meters. Won silver in the long jump at the 2017 World Para Athletics Championships. Sponsored by Hoken no Madoguchi Group Inc. 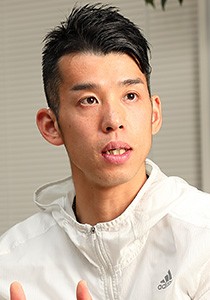 Together to the Top

Para athletics duo Takada Chiaki and Takada Yūji are not your typical married couple. For starters, both hold Japanese national records—Chiaki in the women’s long jump and 100 meters and Yūji in the men’s 400-meter hurdles. They are also top prospects to represent Japan at upcoming major international para sports events. Chiaki, who is visually impaired, is expected to represent Japan in the T11 class in the long jump at the 2020 Tokyo Paralympic Games, while her hearing impaired husband Yūji is the odds-on favorite to run the 400-meter hurdles for the Japanese team at the Deaflympics in 2021. 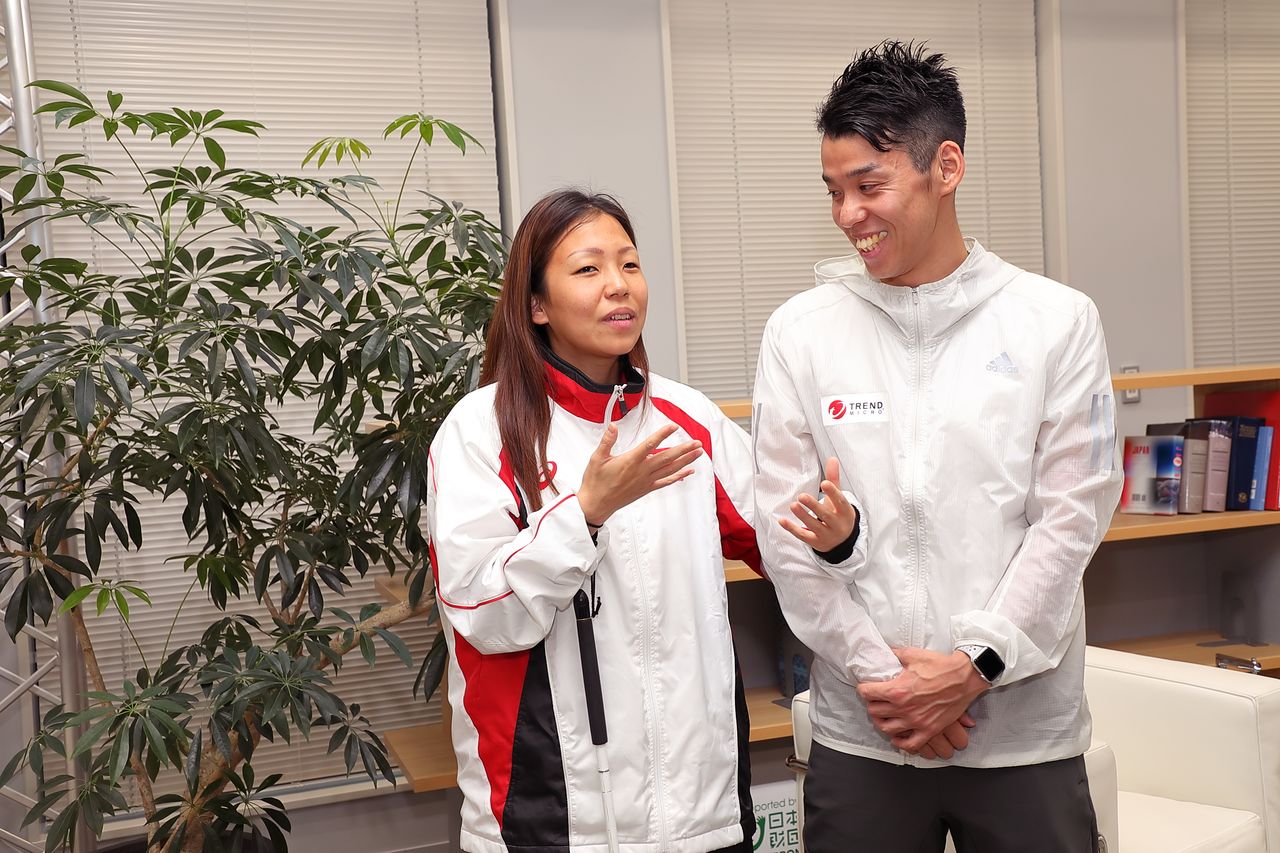 While the pair are training hard in their respective events, with the Paralympics just around the corner the spotlight is on Chiaki—and for good reason. At the 2019 World Para Athletics Championships in Dubai, she jumped 4.69 meters, surpassing her personal best by a whopping 24 centimeters and falling short of a bronze medal by a mere 5 centimeters. Expectations are high that backed by a home crowd she will fly even further in Tokyo and clinch a medal.

Yūji is also a potential medal contender, but he will have to wait until after Tokyo 2020 for his moment to shine as the Paralympics do not feature events for deaf athletes. He is a good sport about the attention being lavished on the impending games, joking that “the Paralympics are stealing all the thunder.” However, he makes certain to point out that the Deaflympics boast a longer tradition, dating back to the 1920s, while admitting that more effort is needed raise the profile of the event.

Although rivals for attention, Chiaki and Yūji are unwavering allies in their bids to medal. They insist that in sports and marriage alike they share everything, a stance that allows them both to focus their full attention on training while also enjoying a happy home life.

Eyes on the Runway

Chiaki first garnered attention on the long-jump runway for her performance at the 2016 Rio de Janeiro Paralympics. A relative unknown internationally, she jumped to an impressive eighth-place finish in an event crowded with talent. She has continued to refine her form, and although she just missed out on bronze in Dubai, she says she is riding a wave of momentum into Tokyo and is confident of her chances of medaling. “I can nearly picture myself atop the podium,” she exclaims.

Early in her career, Chiaki was a sprinter specializing in the 100 and 200 meters. Competing in the category for athletes with the highest level of visual impairment, T11, she ran with guide Ōmori Shigekazu, a former Olympian who participated in the 400 meters in Barcelona and Atlanta. Ōmori was well acquainted with Chiaki’s speed on the track and thought it would give her an advantage in the long jump. After seeing her prowess in the event, he called on Olympic women’s long jumper and Japanese record holder Imura Kumiko to help refine Chiaki’s raw talent. 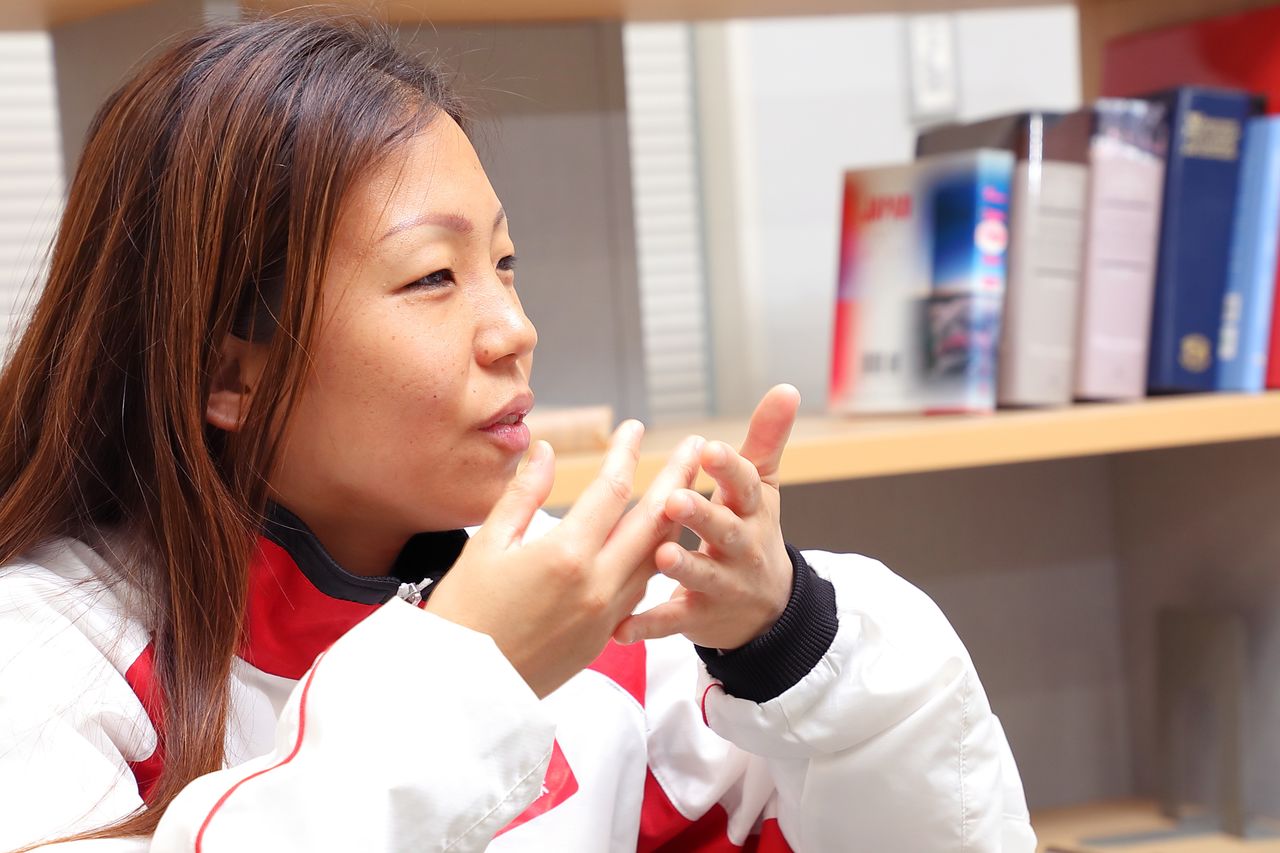 “We got right to work building my jumping form,” recalls Chiaki, adding softly that it was a struggle to find an approach that worked. Unable to see Imura demonstrate the various motions, Chiaki says she relied on her coach’s verbal instructions, but found it extremely challenging to visualize the mechanics.

Taking a new approach, Chiaki checked the position of Imura’s body in each step of the jump with her hands. With gradual adjustments, she says that in Dubai, she was about a third of the way to completing her form, but that she aims to be close to perfect by the time the Paralympics kick off at the end of August. 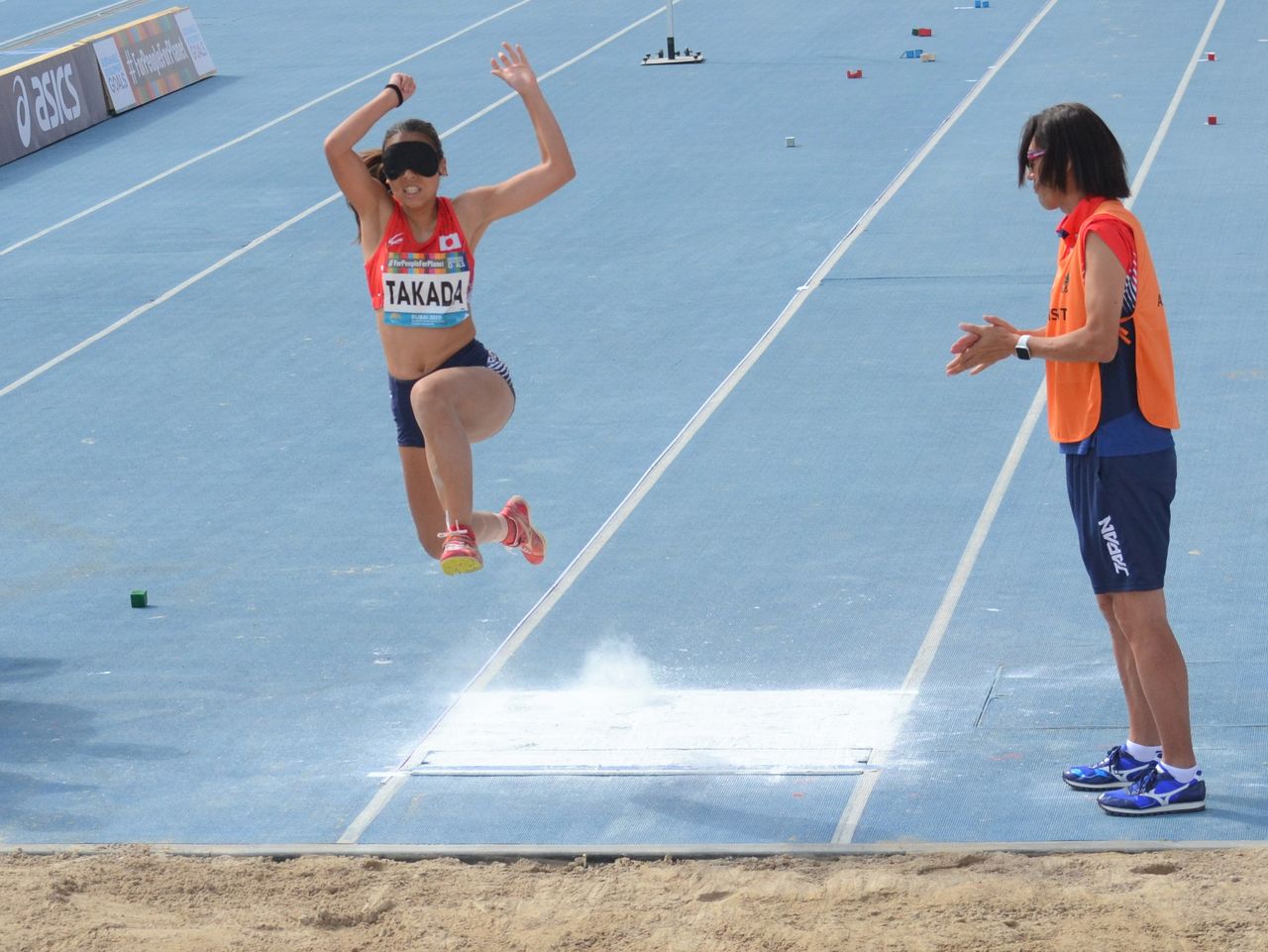 Takada Chiaki competes in the long jump at the World Para Athletics Championships in Dubai in November 2019 as guide Ōmori Shigekazu looks on. (© Jiji)

As in most marriages, the Takadas have had to overcome barriers to communication, adding their own unique twist to the undertaking. Although Yūji was born deaf, he mastered all the sounds of the Japanese language from a young age and is able to speak normally with his wife. However, as he is unable to hear her respond, Chiaki learned to communicate in sign language, a task made more challenging by her visual impairment. 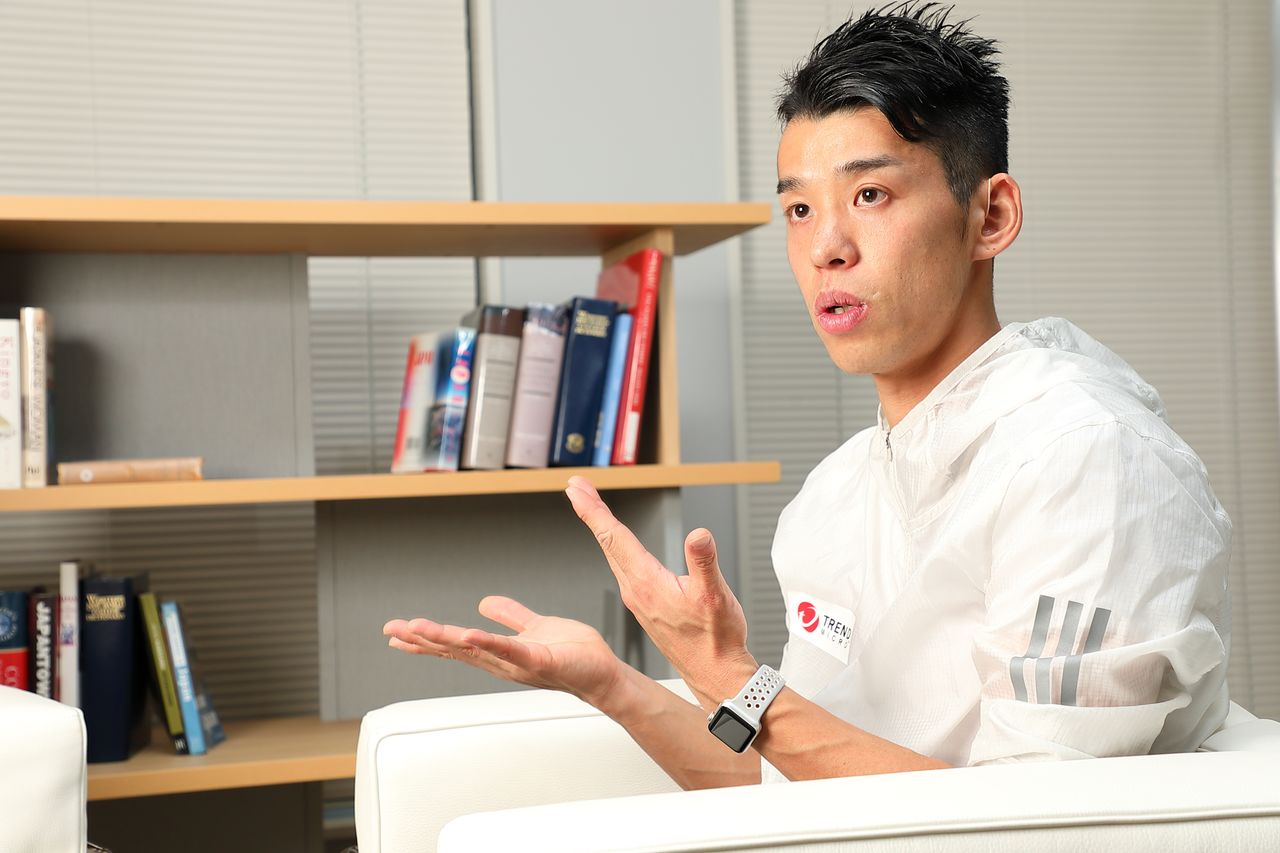 Yūji attributes his verbal aptitude to the determination of his mother, who pushed him to learn how to form the basic sounds of Japanese as a child. “I couldn’t hear what I was saying, but I was motivated because she would give me a treat if I got it right,” he chuckles. Changing to a serious tone, he adds: “She insisted that I never use my deafness as an excuse for not giving it my all.”

Taking his mother’s teachings to heart, Yūji was a diligent student, earning top marks all through school, and excelled in sports. After high school he trained to be a professional baseball player, but his dream was cut short by a shoulder injury. Not pausing to lament, he switched gears and entered Yokohama National University, where he studied to be a teacher. It was there that he took up athletics, his natural speed and agility making him a perfect fit for the 400 meters and hurdles. 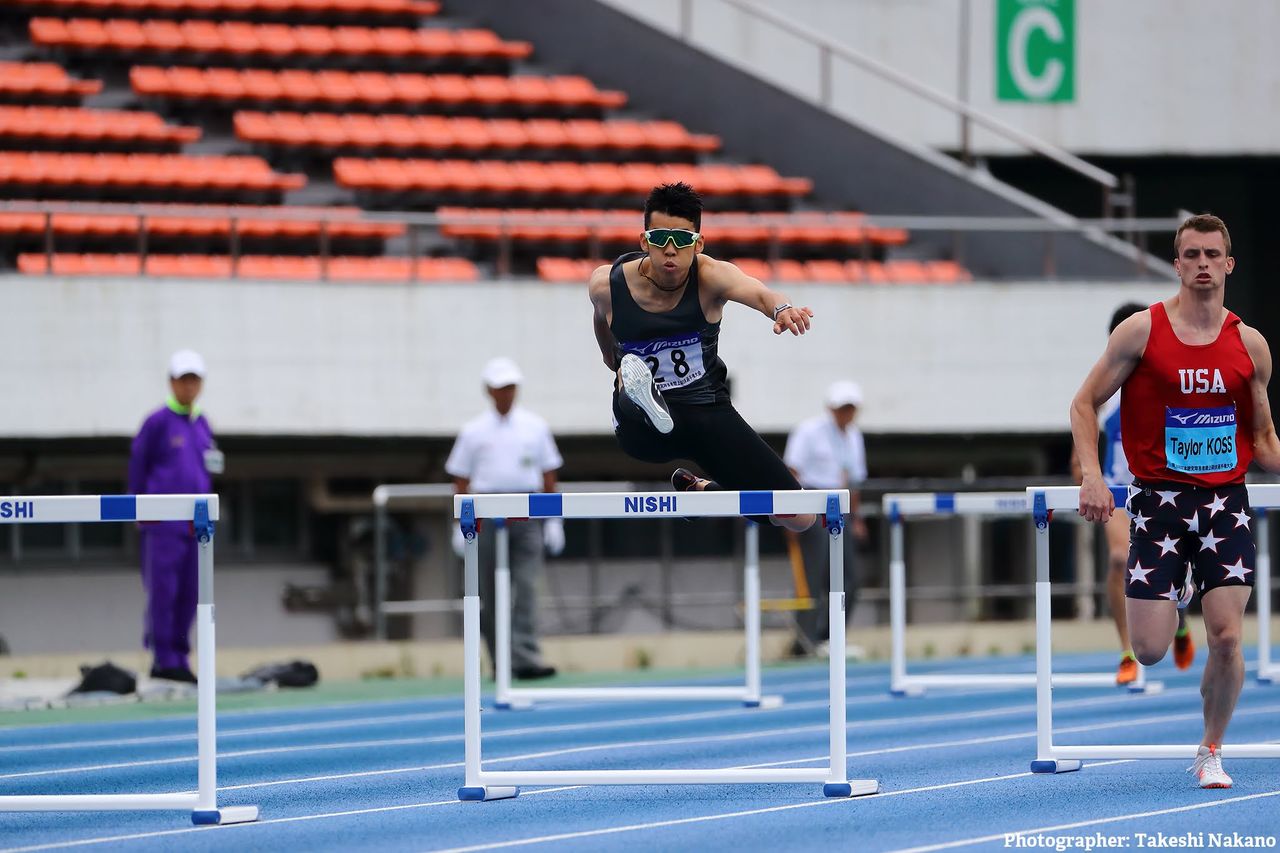 Takada Yūji runs the hurdles at the Japan Deaf Athletics Championships in Tokyo in June 2019.

As a child, Chiaki was diagnosed with macular degeneration. From junior high school on she attended schools for the blind. As she grew up, her parents encouraged her to be confident and independent and to explore her surroundings. At school she tried her hand at a number of sports, but most enjoyed athletics. Determined to pursue it to its highest level, she approached Ōmori and asked to join the athletics club he ran.

She first met Yūji while competing at the Japan Para Athletics Championships in 2006. The two hit it off right away, and after a brief courtship they married in 2008. Not long after, Chiaki learned she was expecting. The news caused some concern for the couple’s parents, who worried about whether the young pair were up to the task of parenting, but anxieties quickly dissipated when Chiaki gave birth to their son, Satoki, in 2009.

With the Paralympics and Deaflympics approaching, the Takadas are in a friendly competition to see which parent will be the first to bring home a medal, preferably gold. Chiaki will have a head start, but both are confident of their chances and remain focused on training hard to represent Japan.