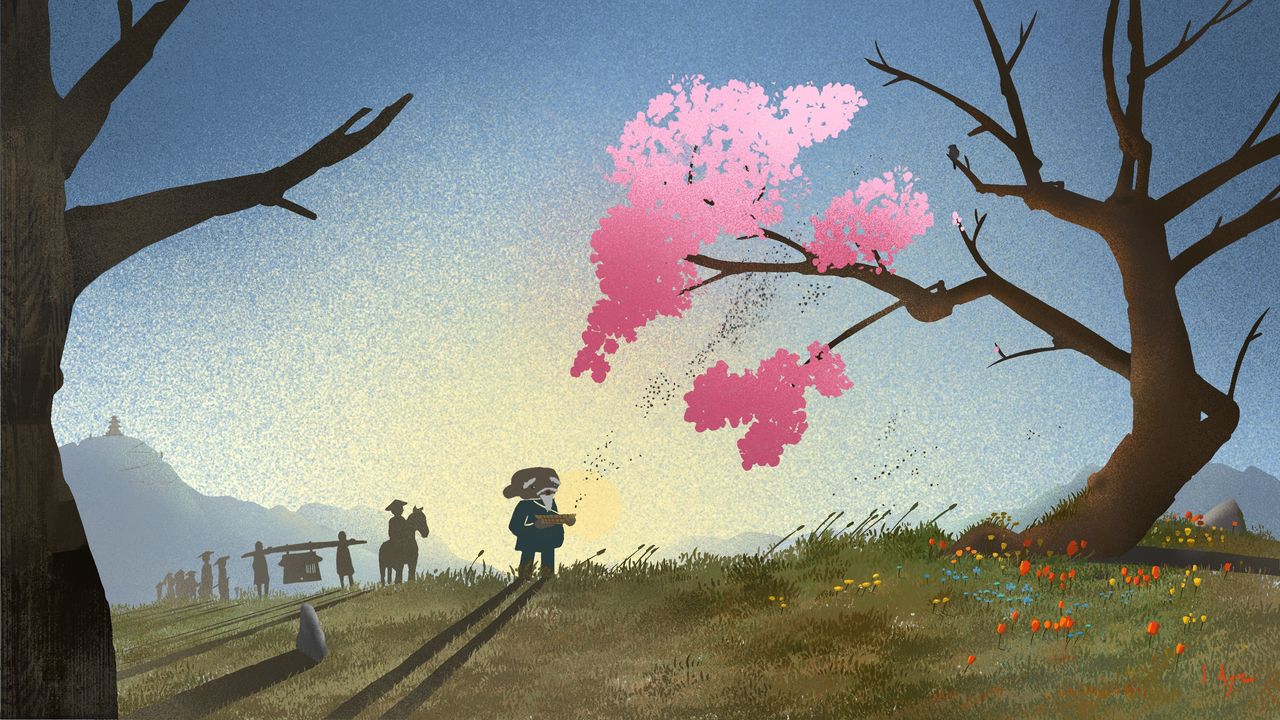 Hanasaka Jīsan: The Man Who Made the Flowers Bloom

Culture Apr 28, 2022
An honest man’s rewards anger his jealous neighbor in this fairy tale from Japan.

A long time ago, an honest old man was trudging through the snow one winter’s day when he found a white puppy lying abandoned in his way. “The poor creature,” he murmured, and he tucked the dog inside his robe to take it home. His wife was delighted to see the puppy too. They decided to call it Shiro, and cared for it like their own child.

One day, as the old man was out tilling his field, Shiro started barking more excitedly than usual. The dog ran around in a circle, sniffing and pawing at the ground. The old man wiped the sweat from his forehead and approached the enthusiastic animal, which seemed to be urging him to dig. He began striking his hoe into the soil, and before long it hit against something hard. To his amazement, he unearthed dozens of gold coins. 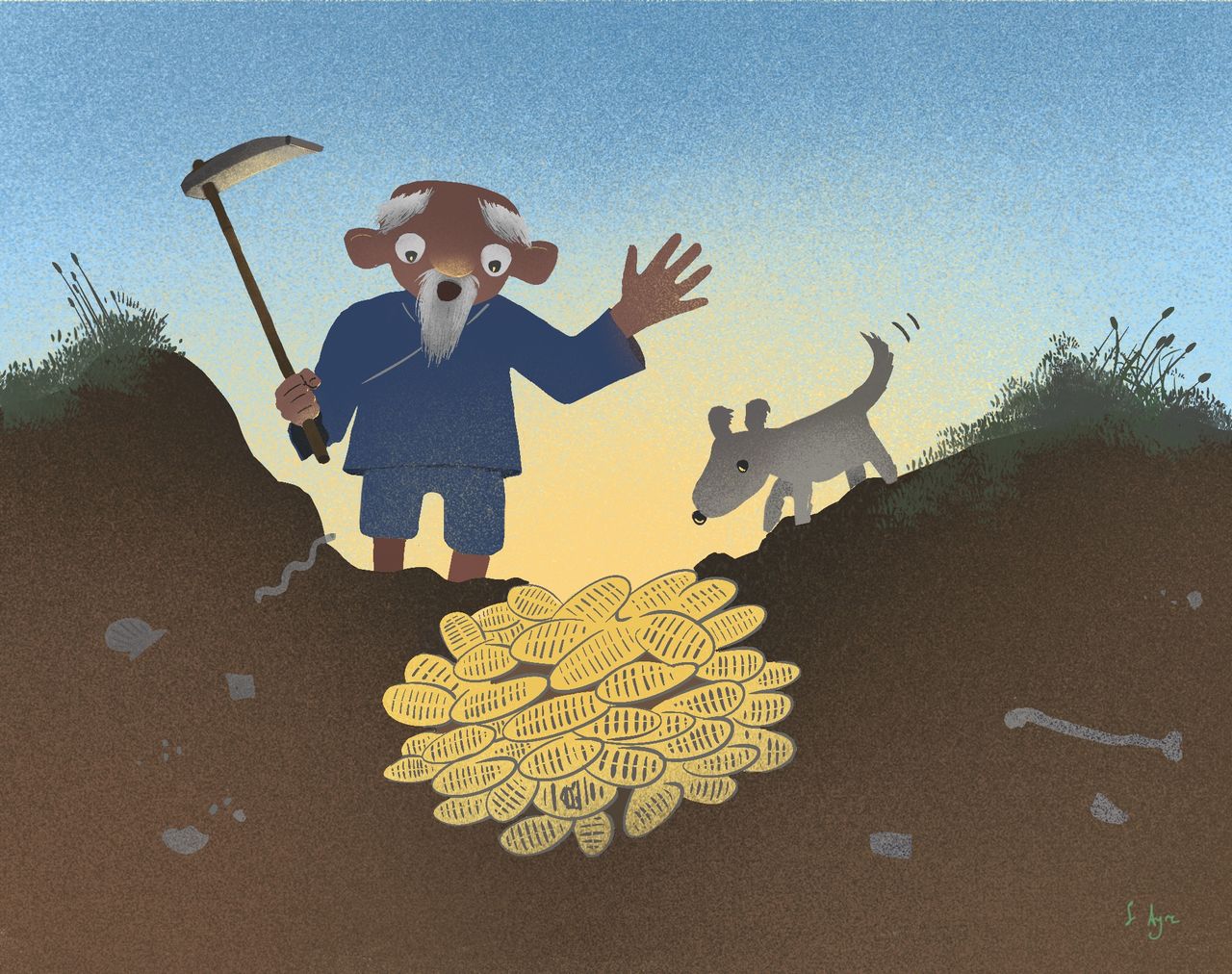 The old man had a greedy neighbor, however, who was filled with envy at the news of these miraculous riches. He insisted on borrowing Shiro to search his own field for treasure. The man dragged the poor dog around for hours. When Shiro stopped moving out of exhaustion, the neighbor believed that this was where riches could be found, and began to dig. Instead of gold, though, he discovered a squirming mass of snakes, centipedes, and cow dung. In a rage, he struck Shiro dead with his hoe.

The honest old man and woman buried Shiro in the corner of their field, their eyes filled with tears. Then they planted a pine tree seedling in the earth, in memory of their companion. As they stood there in silence, the seedling’s trunk began thickening in front of them, and its branches grew out in all directions as it rose toward the sky. In no time at all it had become a full-grown tree.

The couple remained speechless for some moments, struck with awe. Then, the old man spoke. “This must be Shiro’s doing. I’ll make a mortar from this tree as a memento of our dog.” So, he carved a large mortar for making mochi rice cakes. Yet as soon as he filled it with sticky rice and began pounding it with his mallet, he found that the rice transformed into more piles of gold coins.

The neighbor grew ever more jealous on hearing this news, and demanded to borrow the mortar. He took it back to his home, where he set to making mochi, just as the honest old man had done. A foul smell soon filled the room, however, and he discovered that the rice had turned into rotten meat and fish. The furious neighbor chopped the mortar into firewood and burned it until nothing was left but ashes.

From Ashes to Flowers

When the honest man went to get his mortar back, he was astonished to find that it was now only ashes. Still, thinking that there was nothing he could do about it, he gathered the ashes in a basket and took them home. “This is all we have left of Shiro’s tree now,” he told his wife. Then, he decided to sprinkle the ashes on the dog’s grave.

As he was walking to the grave, however, a great gust of wind picked up the ashes and scattered them in all directions. Some landed in the old man’s plum and cherry trees, and wherever they fell, flowers sprang up from the bare, winter branches. “This is Shiro’s doing,” he said, and began to strew ashes around the rest of the trees. “Come, blossoms! I bid you to bloom,” he cried out.

Just then, the lord of the domain was passing by with his entourage of retainers. “How marvelous!” he said, as he admired the trees bright with unseasonal flowers. He could hardly believe his eyes when he saw the old man at the center, still bringing forth new blossoms. “That old fellow!” he said, “The hanasaka jīsan. The man who makes the flowers bloom. See that he is well rewarded!” A retainer rushed to obey the instruction.

The neighbor was even more jealous at this turn of events. He collected as many of the remaining ashes as he could and flung them at his trees. “You can bloom if they can bloom,” he yelled. But the ashes remained as ashes, and what was worse, the wind lifted them up and dropped them over the lord and his retainers. The lord was so angry, the neighbor only barely escaped with his life.