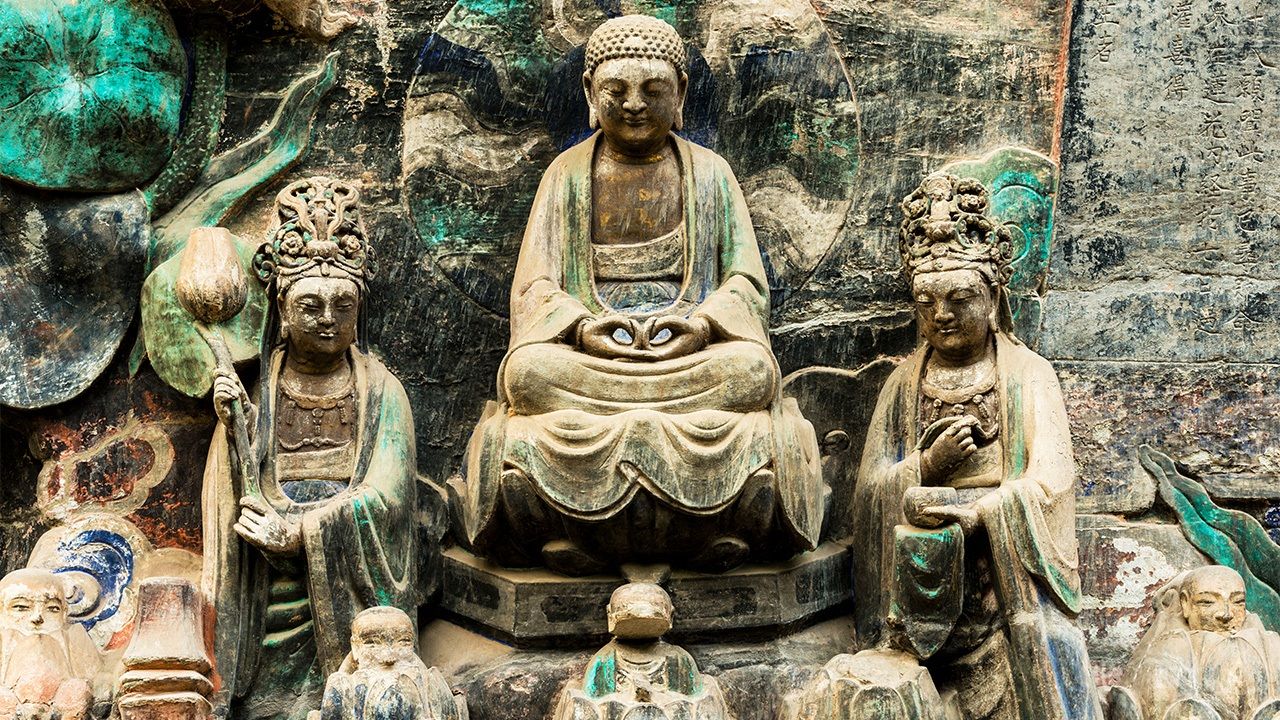 The Beginnings of Mahayana Buddhism

Culture History Dec 20, 2022
Five hundred years after the Buddha’s death, a radically new version of Buddhism was born and spread with its new teachings along the Silk Road into China. This new version became known as Mahayana Buddhism, or the “Greater Vehicle.” A look at how the teachings of Shakyamuni entered China, and the dramatic transformations they underwent on their way to Japan.

Mahayana Buddhism Takes Form: Anyone Can Become a Buddha

From its beginnings in India some 2,500 years ago, Buddhism spread and became influential across a wide area of the subcontinent and Central Asia. The decision of King Ashoka, the third-century ruler of the Maurya dynasty, to become a Buddhist was a pivotal event in the early history of the religion. It is thought that Buddhist teachings were known throughout India and had expanded as far south as Sri Lanka around this time.

In Sri Lanka, the religion has survived a turbulent history, and remains today more or less in the original form in which it was first brought to the island all those centuries ago. From Sri Lanka, the teachings of Buddhism reached Southeast Asia, where Buddhism continues to be a vital part of daily life in many countries to this day. The Theravada Buddhism (the name means “the school of the elders”) practiced in Sri Lanka and Southeast Asia today remains close to the original Buddhism that took shape in the years after the religion was founded.

Around 500 years after the death of Shakyamuni, however, a new variety of Buddhism started to gather adherents in northwest India. This new version of the faith, which espoused dramatically different doctrines from the original teachings of the Buddha, spread from India along the Silk Road into China. Collectively, these new teachings are known as Mahayana (or “the greater vehicle”) Buddhism.

What are the main characteristics of Mahayana Buddhism? In its original form, Buddhism taught that by joining the sangha and becoming a monk, a person could follow a rigorous set of meditative and spiritual practices and eventually attained enlightenment and release from suffering as a disciple of the Buddha. Buddhist disciples and practitioners who achieved enlightenment in this way were known as arhats (Sanskrit) or arahants (Pali). These were regarded as admirable, praiseworthy figures who had achieved the same enlightenment as Shakyamuni—but they were not believed to have the same deep compassion as the Buddha or the same profound understanding of the universe, and were not revered in the same way. They were holy men, but remained disciples of the Buddha. In its original form, Buddhism taught that the highest objective for ordinary people was to follow the Buddha’s teachings and attain enlightenment as arhats. We cannot become buddhas ourselves.

The teachings about enlightenment underwent dramatic changes in Mahayana Buddhism, which began to teach that the path to Buddhahood was open to anyone who followed the right practices. Mahayana Buddhism taught that it was possible for anyone to attain a status equal to the supreme being in the universe.

In the sutras, the Buddha only ever tells his followers that they should aim to become arhats. He never exhorts them to become a Buddha like himself, and never even suggests that such a thing might be possible. For this reason, the founders of the Mahayana sects needed to create new sutras that were quite different from the existing scriptures. In arguing that normal people could achieve Buddhahood themselves, these new sutras all followed the same basic premise.

In them, the Buddha would appear and say: “It is true that in other sutras, I told you that people who became monks and followed my teachings could become arhats, but these were merely the introductory teachings. In fact, a deeper truth exists, and people who follow these practices based on an understanding of this deeper system can become not merely arhats but Buddhas. I will now explain this ultimate truth, so listen well.”

Using this basic formula, the founders of Mahayana Buddhism created new texts that expressed what each sect believed understood as the supreme truth, and presented it as being spoken by Shakyamuni. These became the sacred texts of Mahayana Buddhism, including the Heart Sutra, the Lotus Sutra, the Pure Land Sutras, and the various texts of esoteric Buddhism.

An Attractive Spin on the Original Teachings

In China, this diverse mixture of new Mahayana sutras arrived at the same time as the original form of the religion as it had been taught by the historical Buddha, in the first and second century of the common era. These diverse and mutually contradictory doctrines were all presented as “the teachings of Shakyamuni.”

The arrival of this diverse collection of totally different and contradictory philosophical ideas, all supposedly taught by the same historical figure, initially caused considerable confusion among the Chinese intelligentsia. Eventually, they came up with a way of dealing with the apparent contradictions of the diverse body of texts. These radically different texts were all the true teachings of the Buddha, they decided, but he had taught different things at different times of his life, depending on the capacity for understanding of his audience—sometimes limiting himself to relative superficialities, at other times probing more deeply to the profounder levels of the truths he had discovered about the universe. They tried to use logic to reconcile the differences between the various texts, by establishing different levels of truth, even while maintaining the basic belief that these teachings all stemmed from the same person. They tried to decide which sutras represented the highest level of truth, and accepted these teachings as the supreme form of the Buddhist teachings.

Naturally, though, any decision about which sutras represented the supreme version of the Buddha’s teachings depended on the individual judgement of the reader. People made different judgements and chose different sutras as representing the supreme truth of the religion. Believers increasingly put their faith in one set of scriptures rather than another, and before long multiple sects existed alongside each other, each one revering a different text or school of texts as the supreme truth. This was the origin of the different schools of Mahayana Buddhism that exist to this day.

In most cases, Chinese people who read these diverse texts on the understanding that they all represented the words of the same Buddha tended to be drawn to the Mahayana texts. The reason was simple: Although they were built on the foundations of original Buddhism, these had been created by rearranging the content of the original teachings to make it more attractive in many ways. And the mystical elements of the sutras matched with the Chinese philosophical and religious outlook of the times.

Chinese Buddhism therefore took on a strongly Mahayana character. Many different sects and schools came into being, but all of them took Mahayana texts as the basis of their doctrines. The original teachings of the historical Buddha tended to be overlooked as of secondary importance, and the original teachings even became known disparagingly as Hinayana Buddhism, or the “lesser vehicle.”

Original Buddhism Unknown in Japan for Most of its History

In the sixth century CE, Buddhism was introduced to Japan from China, and Japan became another country that took the Mahayana doctrines as the true essence of Buddhism. For the next 1,500 years, Japan cultivated its own traditions as a Mahayana Buddhist country.

It was only in the second half of the nineteenth century that early Buddhism became widely known in Japan, during the Meiji era (1868–1912). As the policy of self-isolation came to an end after more than 200 years, and information flooded in from the outside world, knowledge spread for the first time of a different type of Buddhism in Sri Lanka and Southeast Asia that did not use the familiar Mahayana sutras. And the sutras used in these countries were written in Pali, an ancient language spoken in northern India many centuries ago. The conclusion was unavoidable that Buddhism as it existed in Sri Lanka and Southeast Asia was closer to the original form of the teachings, and that the Mahayana scriptures did not in fact convey the true word of Shakyamuni. This understanding became widespread, initially among scholars.

Today, most scholars agree that Mahayana Buddhism does not represent the true original teachings of the historical Buddha. Within Buddhism itself, it is generally held that although Mahayana Buddhism may not represent the original teachings of Shakyamuni, it was inspired by the same philosophy and the same view of the world, and therefore deserves to be treated as a legitimate part of the tradition.

In the first two parts of this series, I have given a brief account of how Buddhism was born out of the teachings of the historical Shakyamuni in India and then diversified following the advent of Mahayana Buddhism, and how these new teachings spread into China and then to Japan. In the next installment, I want to look at the situation when Buddhism entered Japan for the first time in the sixth century, and attempt to explain why the religion followed a unique evolutionary pathway in this country, resulting in forms of the religions found nowhere else.

(Originally published in Japanese. Banner photo: The Dazu Rock Carvings near Chongqing, China. This outstanding collection of Buddhist sculptures, created by believers in Mahayana Buddhism from the ninth through the thirteenth centuries CE, was saved from destruction during the Cultural Revolution thanks to its remote location, and became a UNESCO World Heritage site in 1999. © Aflo.)