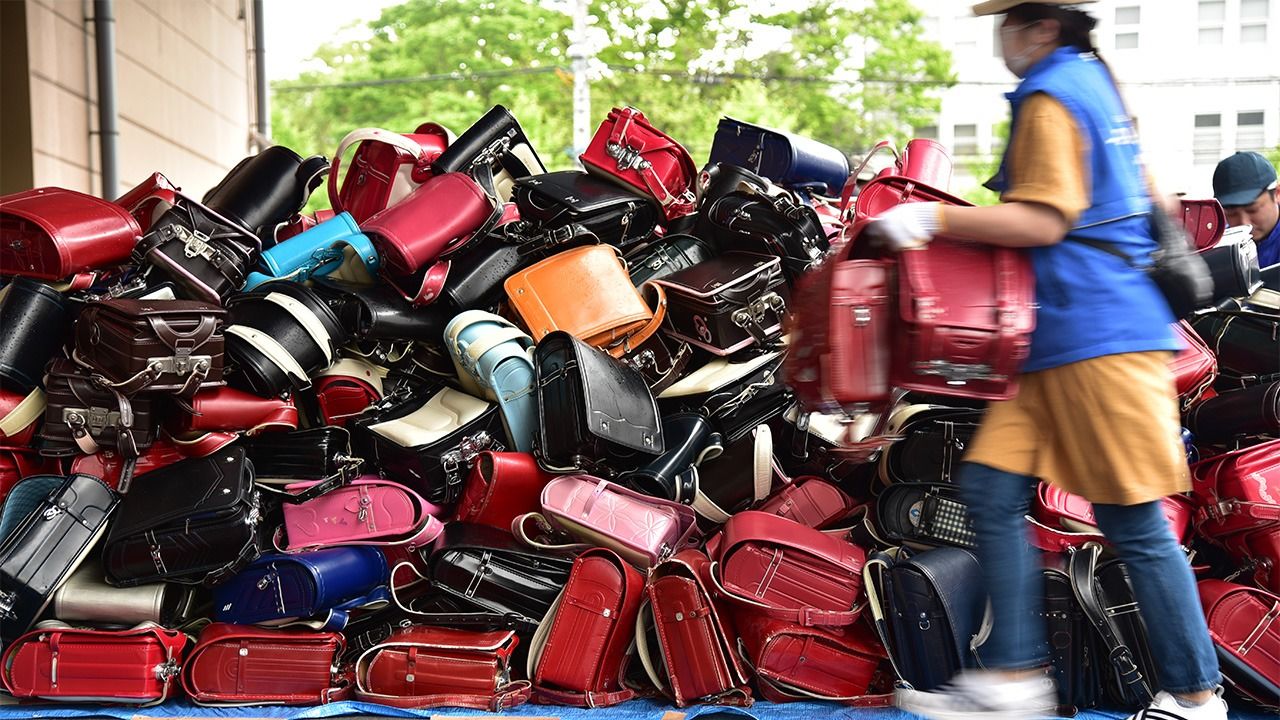 Society Education World Culture Jul 26, 2019
For several years, Japanese schoolchildren have been donating their used randoseru backpacks to an NGO that distributes them to needy children in Afghanistan. The program has helped to highlight the importance of education in Afghanistan.

Every June, colorful piles of randoseru, the durable leather backpacks worn by Japanese elementary school children, arrive at a warehouse in Yokohama. This year marks the sixteenth year of a project run by the Japanese Organization for International Cooperation in Family Planning in collaboration with Kuraray, which makes the materials used in many backpacks. The project collects used backpacks and distributes them to schoolchildren in rural areas of Afghanistan.

Although the bags’ original owners may have no further use for their randoseru once they leave elementary school, the well-made bags are generally still in good condition and fit for many more years of use. So far, the project has collected more than 210,000 second-hand backpacks from all over the country. I first visited the project for a Nippon.com article two years ago, when I was shown around by Program Officer Kai Wakako. Kai recently got in touch to invite me to take part in the work of inspecting recently donated backpacks and to learn a little about how the project has progressed since my last visit.

The Importance of Education

After languishing for more than 30 years under the control of antigovernment Taliban forces, the security situation in Afghanistan is still far from ideal. In many ways, in fact, the situation is worse than ever. After the anguish that followed the terrorist attacks of September 2001, in recent years the country has faced the twin menace of attacks by ISIS and Al-Qaeda.

In 2015, ISIS occupied one of the regions to which the project had previously sent backpacks, in 2004 and 2007. The group’s general practice was to dynamite school buildings, but in this area they left the building intact and barricaded themselves inside. The school found itself on the frontlines of the battle.

But Kai also had some good news for me after two years.

In March 2019, the local people finally managed to drive ISIS out of the region. And the first thing they did after liberation was to rebuild their school. This was not the only option; they could have chosen to hold a military ceremony. But people wanted to make a symbolic gesture, and the whole population gathered to take part in a ceremony to celebrate the reopening of the local school. 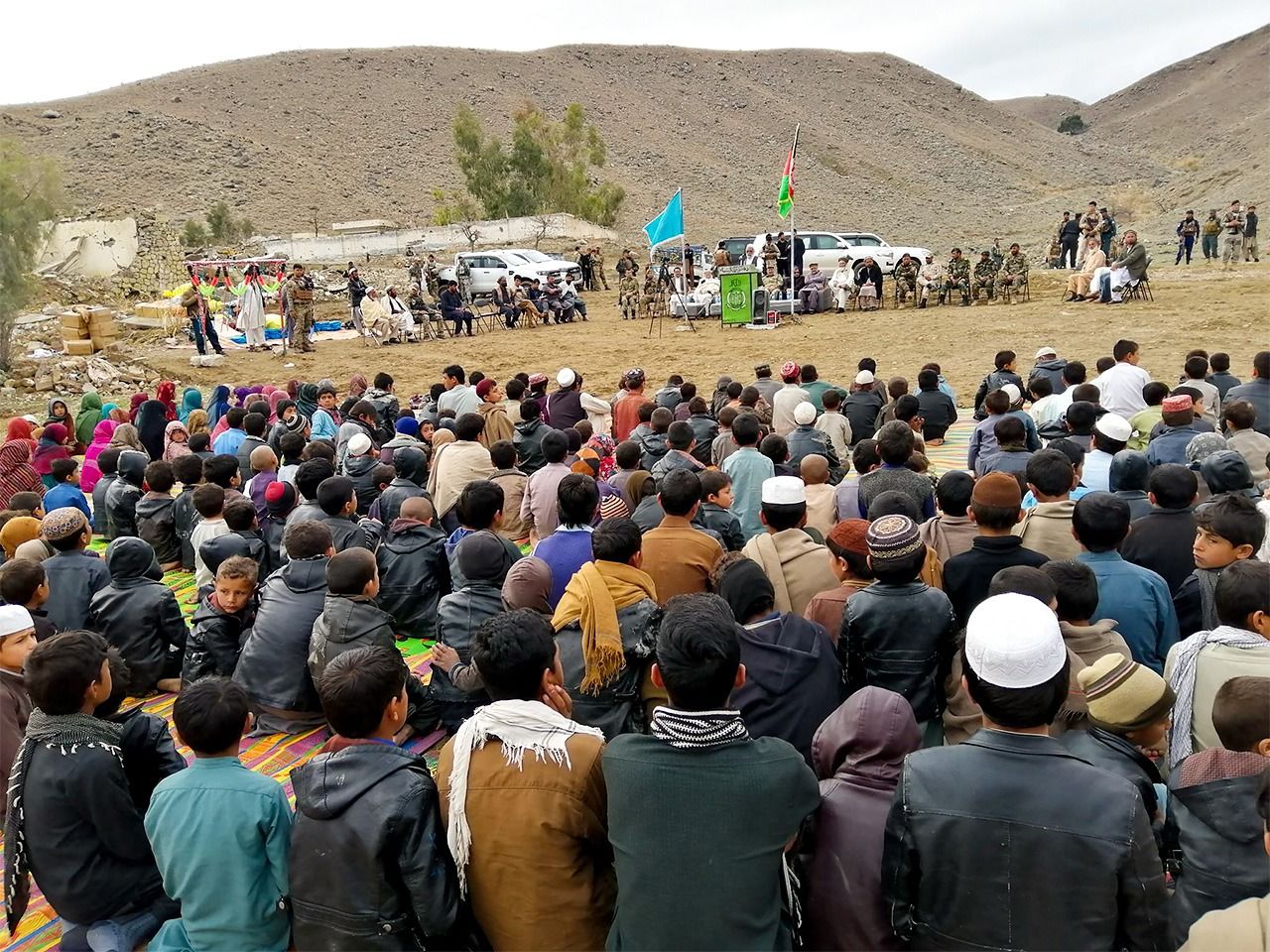 People gather for a ceremony to mark the reopening of the local school in March 2019. Army representatives can be seen to the right of the flagpole. (Photo courtesy Japanese Organization for International Cooperation in Family Planning)

In the rural villages of Afghanistan, it is often difficult to know if children are setting out for school or on their way to play or to herd sheep. But if they are wearing their backpacks it is easy to tell at a glance. When parents see that the neighbors’ children are attending school equipped with smart backpacks, they begin to think, “Maybe we should send ours, too.” Japanese backpacks have become a symbol of education in parts of the country that have benefited from the program.

“The local people say it’s the fruit of our long years of activities in the region, encouraging people to send their children to school,” Kai says with a smile. She continues: “One of the people from the local NGO on the ground was saying how moving it was that the first thing the people wanted to do after getting rid of ISIS was to rebuild their school. It’s really important that people now understand how important education can be as part of defeating terrorists and similar groups.”

Even today, only half of girls in Afghanistan attend school. But in the region where the local school was recently reopened, one girl who received a donated backpack in elementary school later went on to gain admission to the university medical department. She is now working hard at her studies at a city medical school.

The program involves more than simply donating objects. It aims to bring people the joy of studying and also represents a prayer for peace. 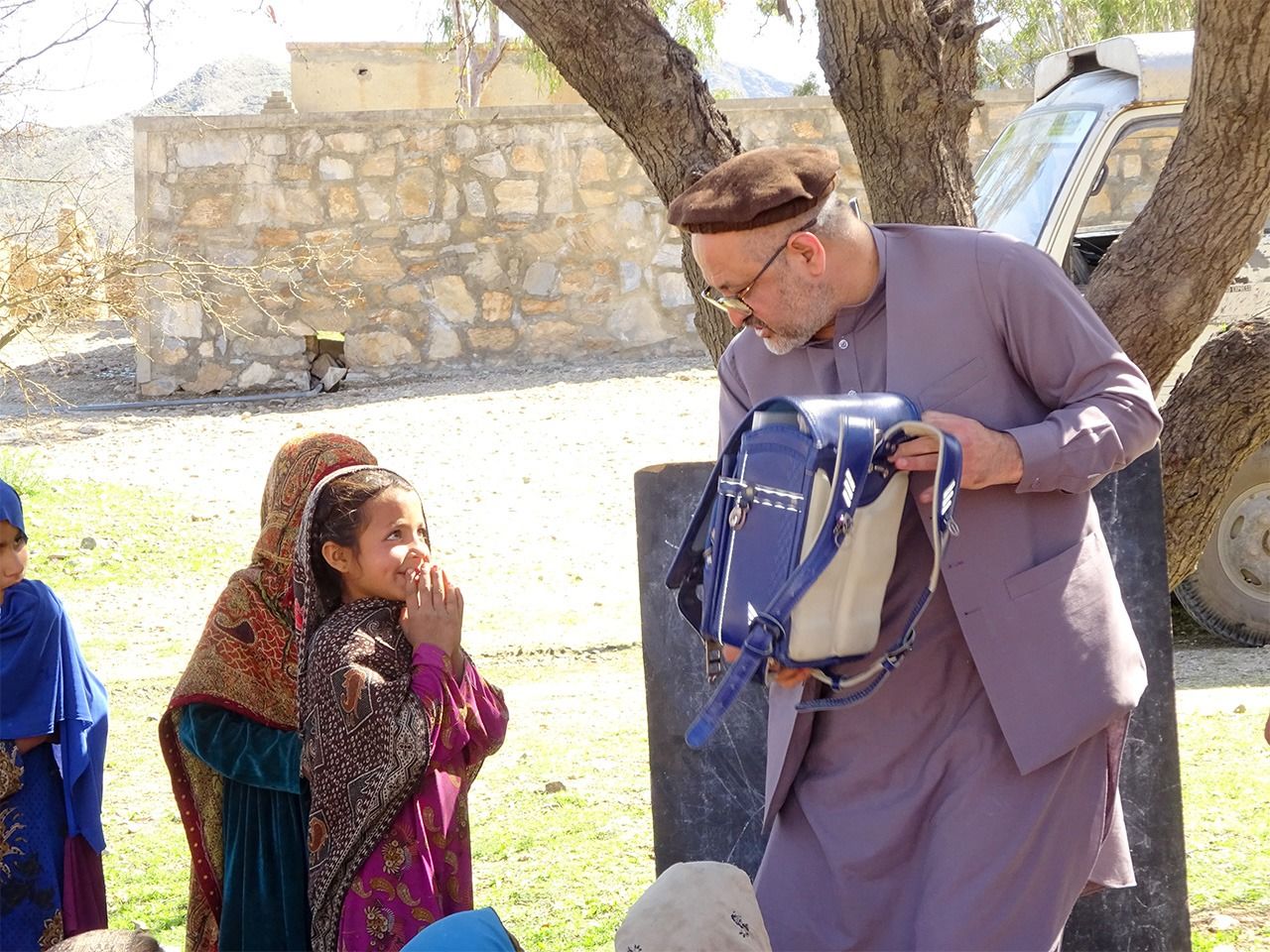 Children Joined Together Through Backpacks

Before the backpacks can be sent to Afghanistan, teams of volunteers sort through the piles of donations that have arrived in the warehouse from all over the country. It is important to weed out any battered bags no longer suitable for use and to make sure that no randoseru made from pigskin are sent to Afghanistan, a Muslim country. After all the satchels have been checked, they are loaded up with the gifts of pens and stationery supplies donated by companies and donors.

I talk to three children who have volunteered to help sort through the bags in the warehouse. I ask if they’re friends. “We are now! We’ve just met,” they say, beaming happily. 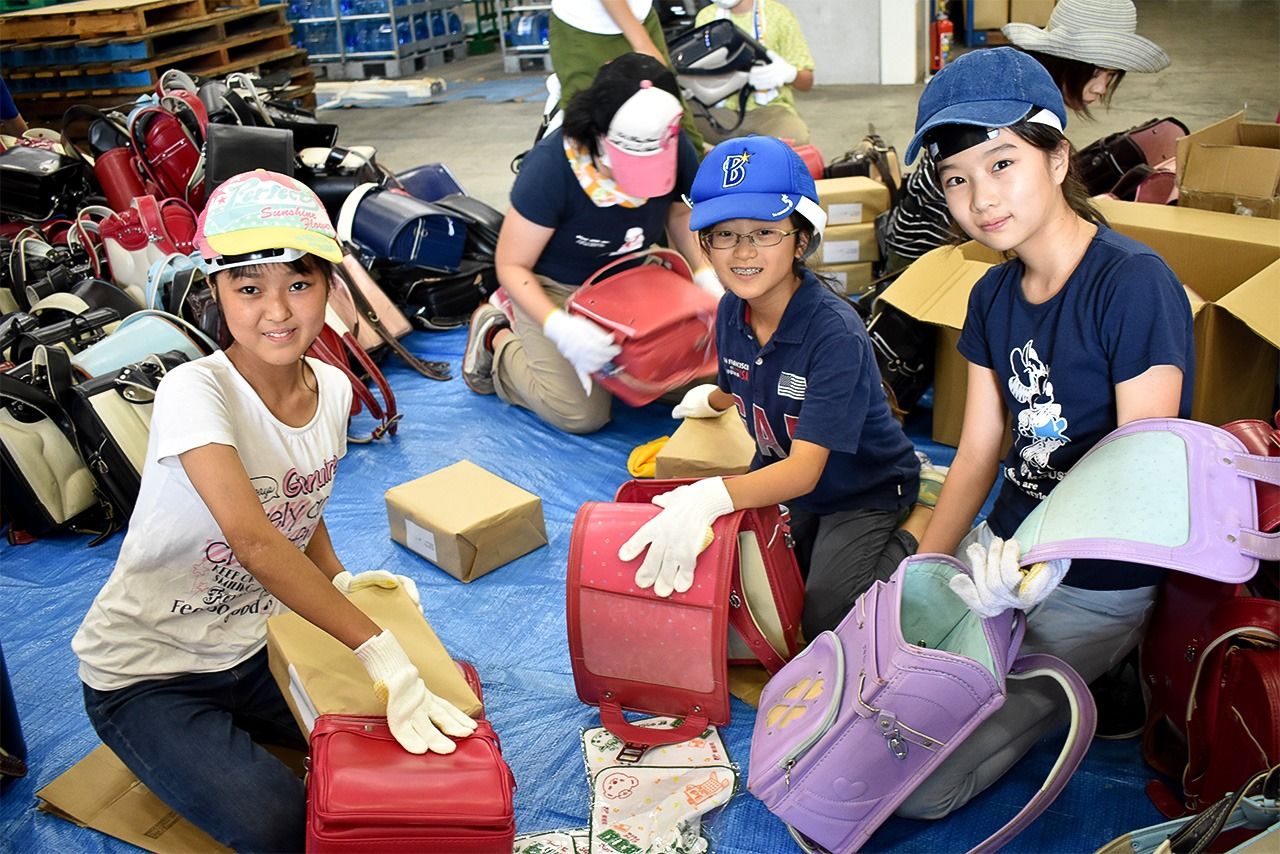 One of the girls is Kō, aged 13. This is the third time she has taken part. Last year, she managed to find her own brown backpack in the pile of donated bags. “My parents bought it for me when I started elementary school. Now I hope someone else is putting it to good use,” she said, placing a packet of notebooks inside a bag.

Her new friend Hiroka, aged 12, donated her own bag this year. “I live nearby,” she says, “so I’ve followed the program every year since I was small. I always knew I wanted to donate my own bag one day when I was finished with it, so I took special care of it all through elementary school, putting a cover on it for six years so that it wouldn’t get damaged. I don’t know what the situation is like in Afghanistan, but I hope that whoever gets my bag will hand it on to her sister or friend when she’s finished with it,” she said, her eyes shining. 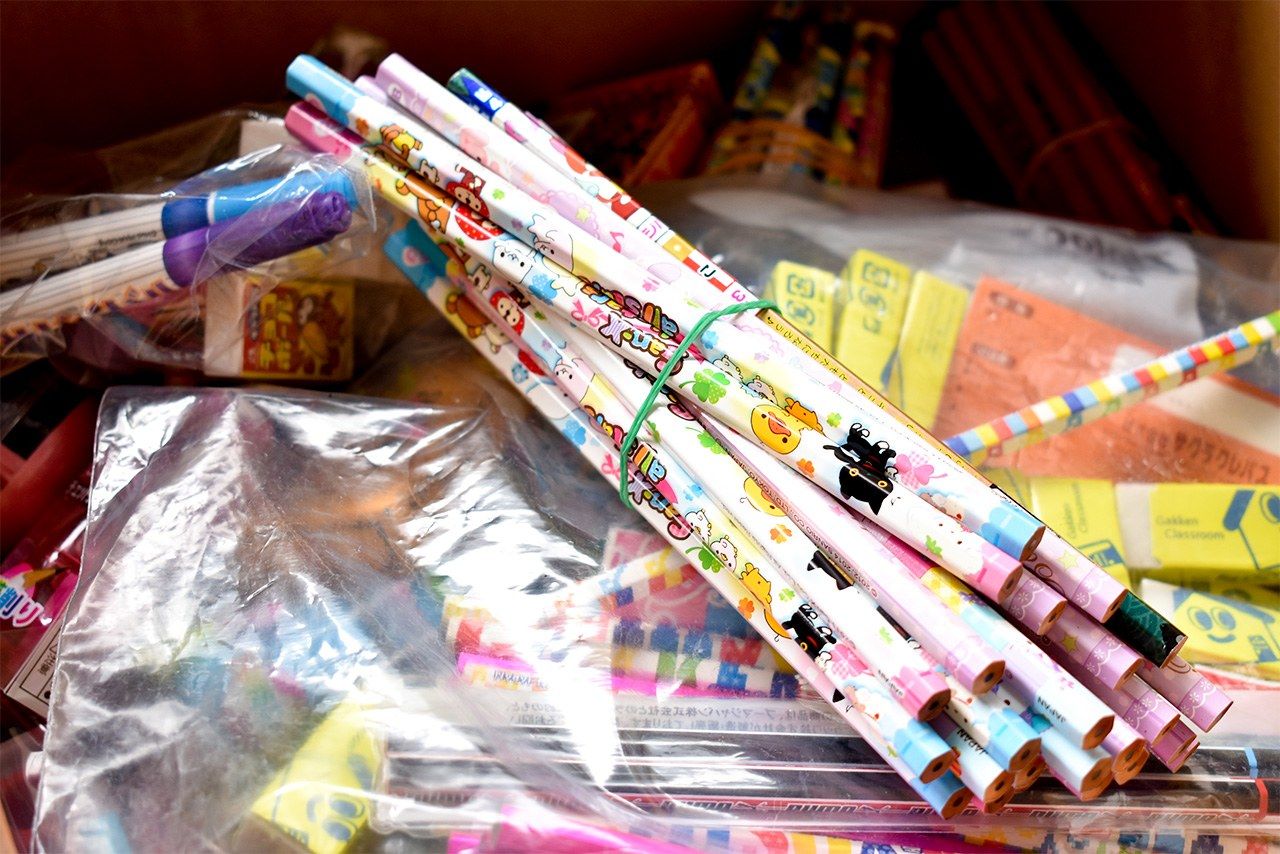 Some of the stationery items that donors send with the bags. 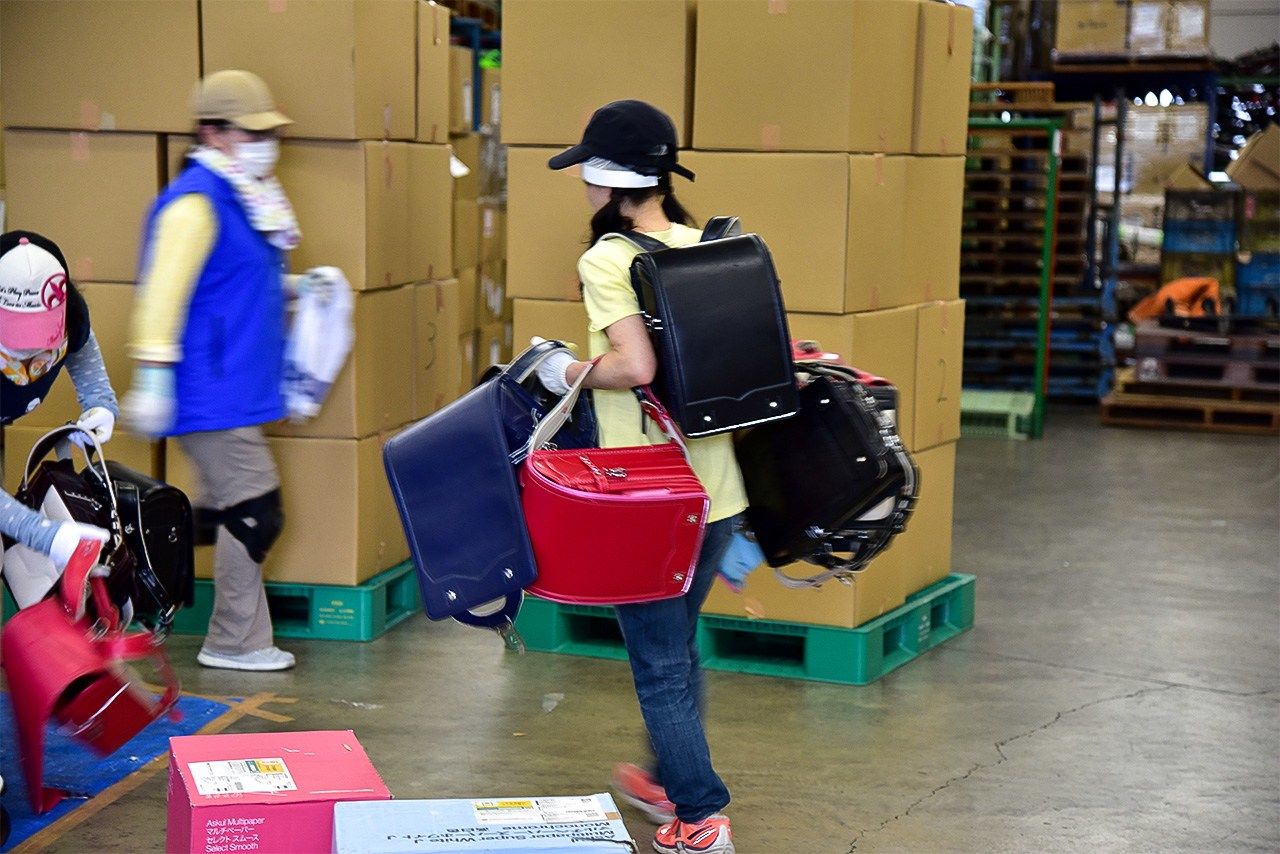 After a break for lunch, Kai gives a report on the situation in Afghanistan, using slides and video. One of the children asks a question: “You said that some children use their bags as desks. But what did they do before the bags arrived?” Kai’s answer paints a bald picture of the reality: “They used to lay their notebooks on the ground.”

A total of 70 people helped out in the volunteer work, which started at ten o’clock on a Saturday morning and went on until late in the afternoon. Everyone who took part had the same hope in mind: that the project would help to connect the children of Japan and Afghanistan and give people in both countries something to smile about. 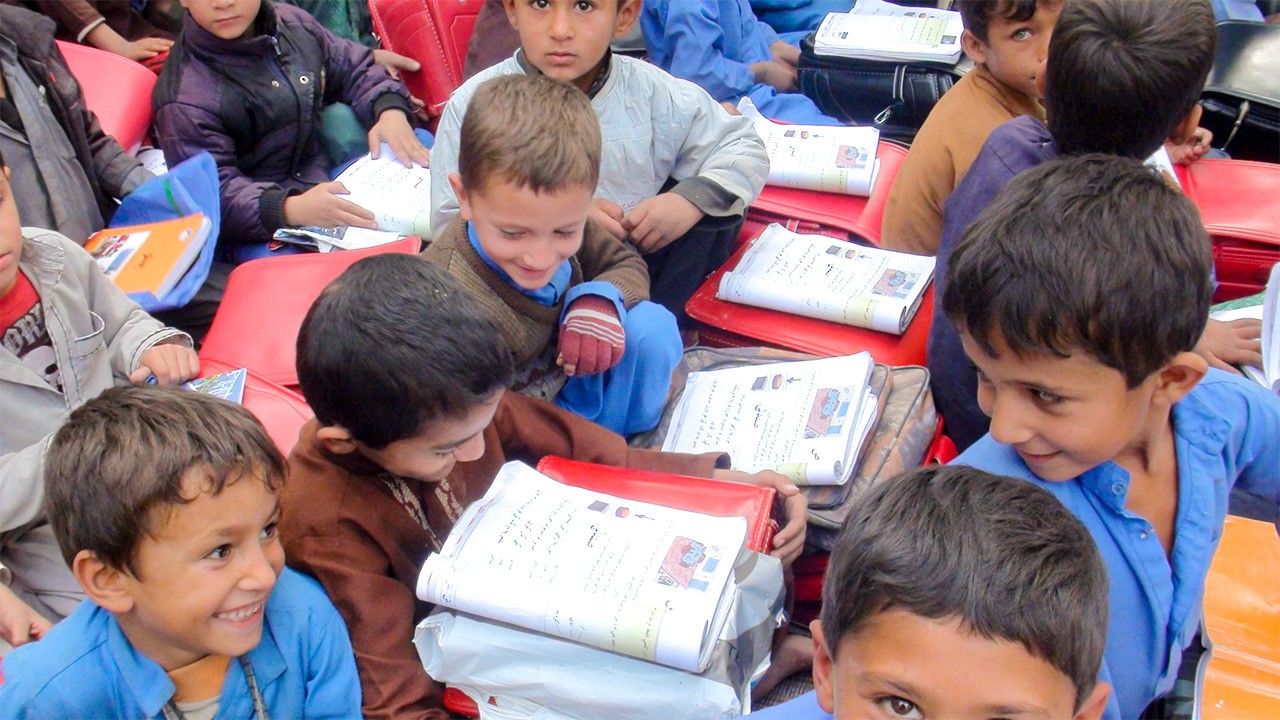 Children in Afghanistan use their backpacks as impromptu desks. (Photo courtesy Japanese Organization for International Cooperation in Family Planning)

(Originally written in Japanese. Interview, text, and photos by Doi Emi and Daniel Rubio of Nippon.com. Banner photo: Donations await inspection in a warehouse in Yokohama. Photo by Daniel Rubio.)