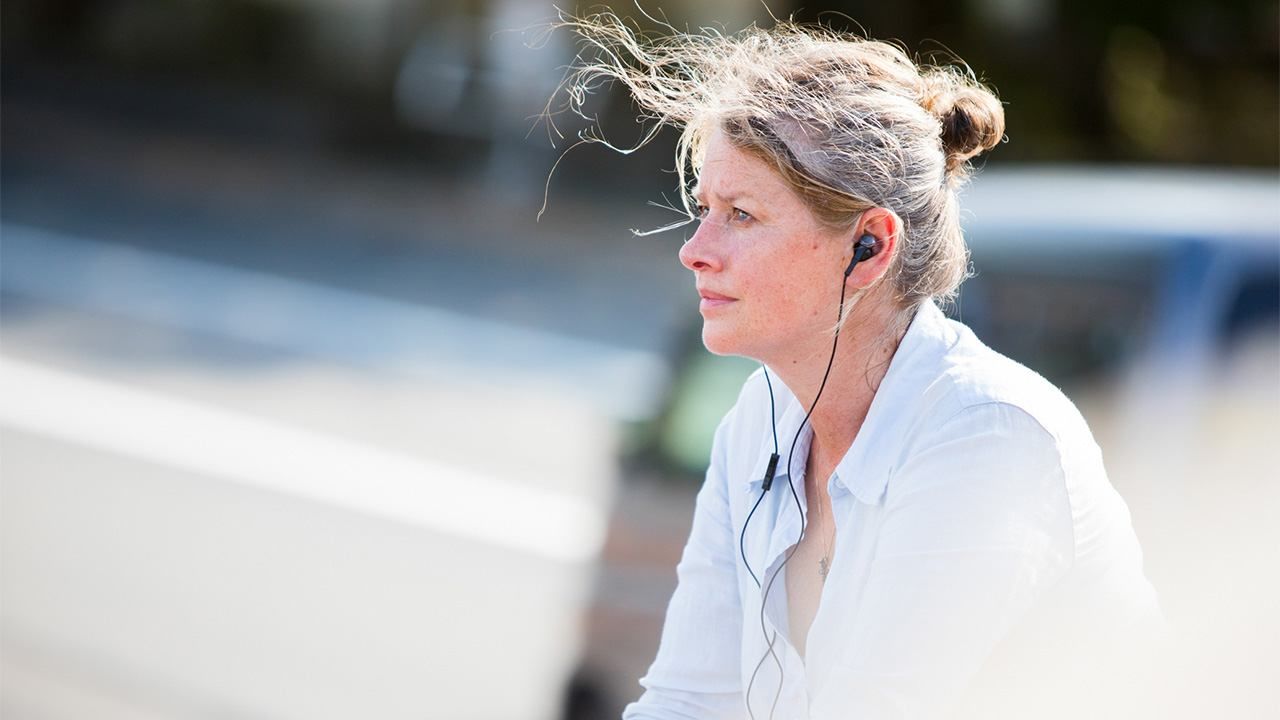 A Nagasaki Postman: A Timeless Message of Peace from Survivors of War

Cinema Culture History Society Aug 9, 2022
Since its publication, Peter Townsend’s 1984 The Postman of Nagasaki, telling the true story of atom-bomb survivor Taniguchi Sumiteru, has been widely read around the world. But how did its British author come to visit Nagasaki and write it? Townsend’s daughter Isabelle and Kawase Mika, director of a new documentary that retraces the author’s footsteps and continues the book’s antiwar message, discuss the work.

Story of a Painful Past

It is now almost five years since the death of Taniguchi Sumiteru, who passed away at the age of 88 on August 30, 2017. Some 70 years previously, he had become known to the world as “the boy with a red back,” the horrifically burned subject of perhaps the most widely circulated photograph of the horrors of Nagasaki—one taken at the end of January 1946, just after he had turned 17, when he had already been receiving treatment for six months.

When the bomb fell on Nagasaki on August 9, 1945, Taniguchi was in the midst of his rounds as a bicycle post boy, just 1.8 kilometers from ground zero. Though he miraculously survived, he would spend more than three years in the hospital, with the first 21 months spent lying face down, receiving treatment on his horrendous wounds. As an adult, he would go on to work tirelessly for world peace and nuclear disarmament as chair of both the Nagasaki Atomic Bomb Survivors’ Council and the Japan Confederation of A-and H-Bomb Sufferers Organizations.

The first part of Taniguchi’s life story was presented to readers around the world in The Postman of Nagasaki, a 1984 nonfiction novel by the former British airman Peter Townsend (1914–95). And though extracts of the Japanese translation published the following year would go on to become a staple of high-school textbooks, this version of the novel itself has been out of print for many years. 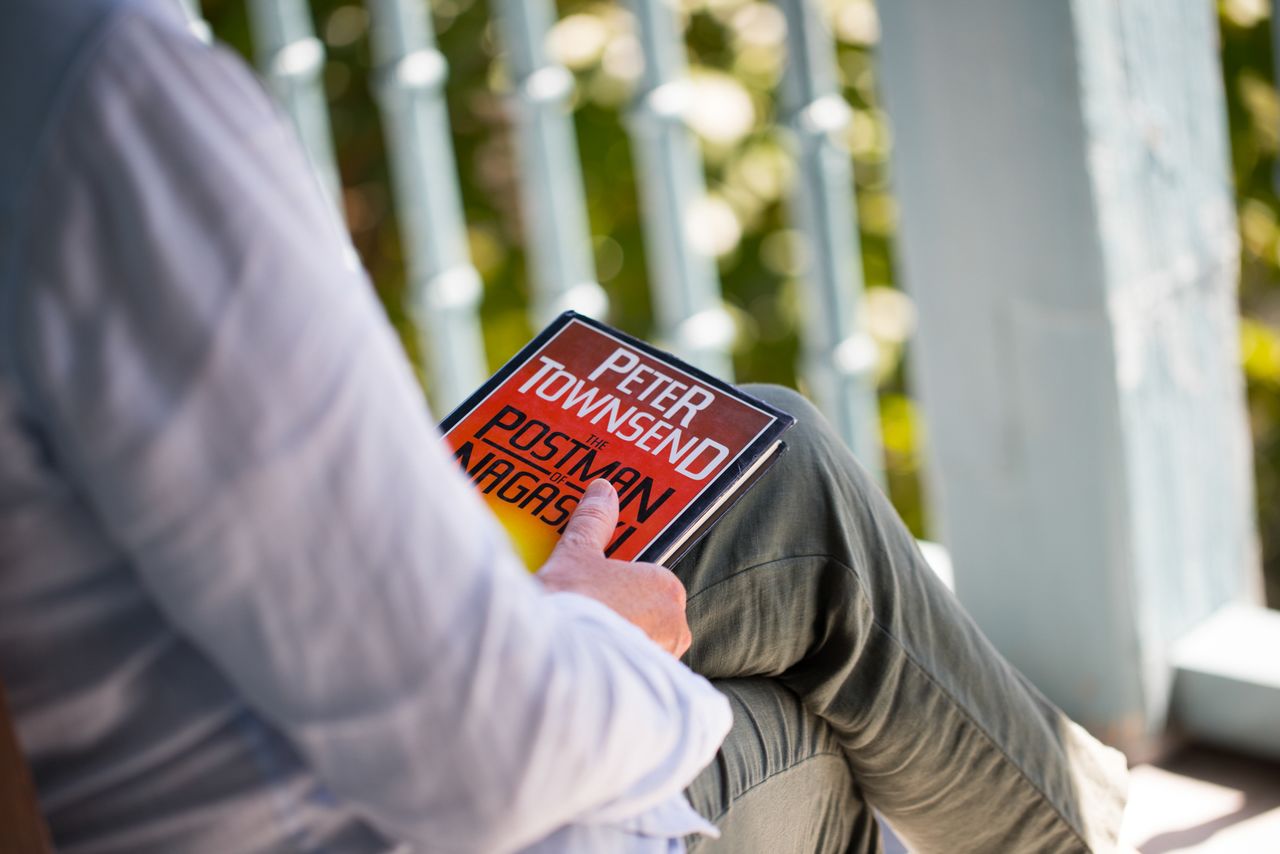 A view of Peter Townsend’s 1984 nonfiction novel The Postman of Nagasaki. (© The Postman from Nagasaki Film Partners/Sakamoto Ayumi)

In later life, Taniguchi pressed hard for a reprint, and in 2014 he was introduced by an acquaintance to the documentary filmmaker Kawase Mika. At the time, Kawase was in the midst of production on Ametsuchi no hibi (2016), a documentary about the Okinawan potter Matsuda Yoneshi, while her previous work Murasaki (2012) had also focused on folk crafts with its profile of the dyeing historian Yoshioka Sachio. And while she was intrigued by Taniguchi as a potential subject, she recalls reservations about tackling so grave a topic. 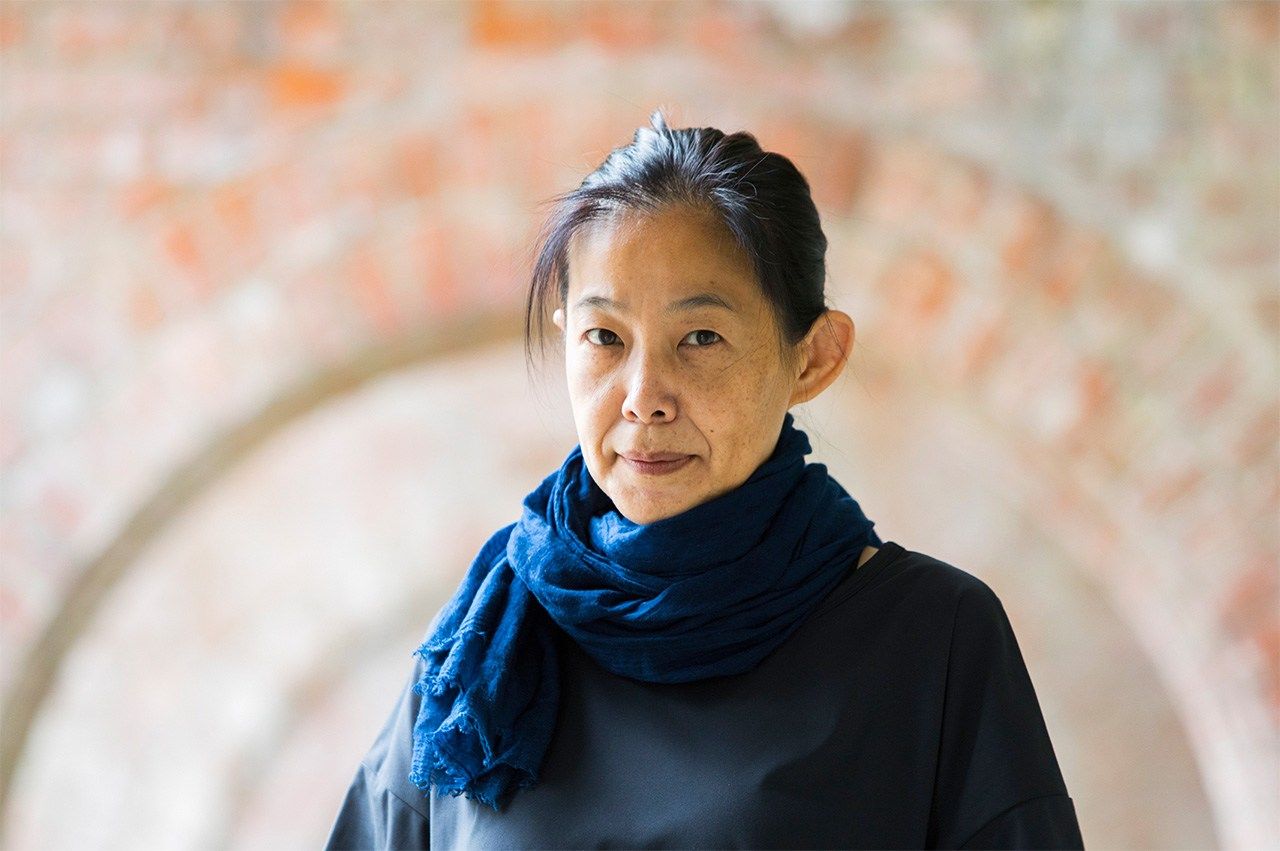 “War is just too monumental a theme,” says Kawase, “and I knew I wasn’t cut out for that, either in terms of familiarity with the subject, or the level of film-craft required. But meeting Sumiteru left such a big impact on me that I wondered what to do.”

Despite these misgivings, she was moved into action. In 2015, she followed Taniguchi to the United Nations Headquarters in New York, to film his speech to the Review Conference of the Parties to the Treaty on the Non-Proliferation of Nuclear Weapons.

Kawase goes on: “It took me a year to find the courage in my convictions. I thought long and hard about how my approach to filmmaking could work with such a project, and what I wanted to achieve. And eventually I decided to just make a leap of faith and let the project take me where it would, without any unnecessary creative input from me, and with no attempt to spin the actual history.”

The angle Kawase eventually arrived at was The Postman from Nagasaki—a documentary about the writing of the novel The Postman of Nagasaki itself—not a retelling of the events portrayed in the novel, but a look back at the author’s arrival in Nagasaki, his encounters with Taniguchi, and how all the ideas and emotions involved led to the book’s genesis. 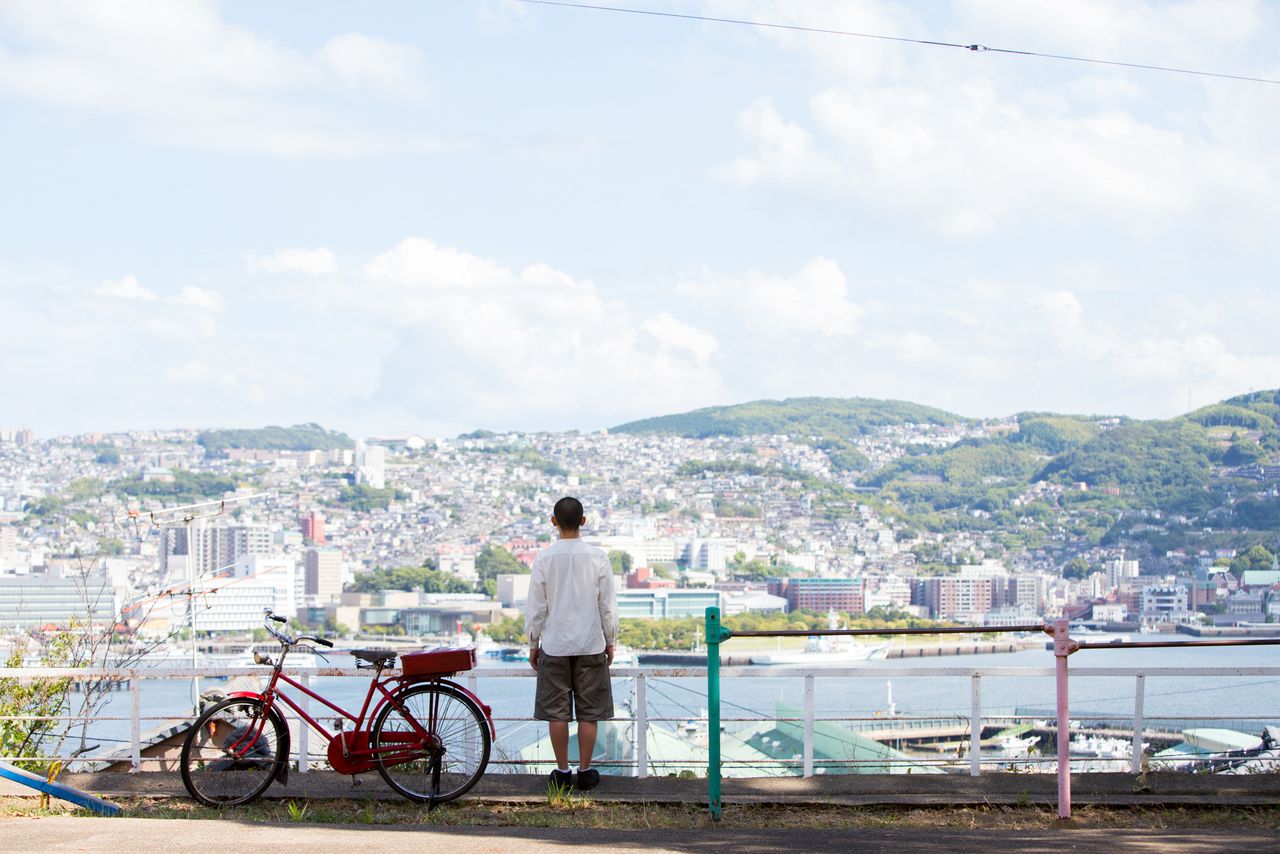 Besides Taniguchi, the author Townsend himself provided another compelling subject. In the 1950s he had caused a global stir when, as aide to King George VI, he embarked on a romance with Princess Margaret, younger sister of the future Queen Elizabeth II. Despite his status as a decorated war hero, having downed numerous enemy jets as a fighter pilot during World War II, he was also a divorcé, and as such could not be permitted to marry into the royal family. He left his position with the household, remarried, started a family, and embarked upon a fresh career as a writer, traveling the world in search of subject matter.

Having already written five bestsellers, he visited Nagasaki for the first time in 1978. Returning again four years later, he stayed for six weeks, getting to know Taniguchi, the city streets, and the stories they held, which became the basis for The Postman of Nagasaki. 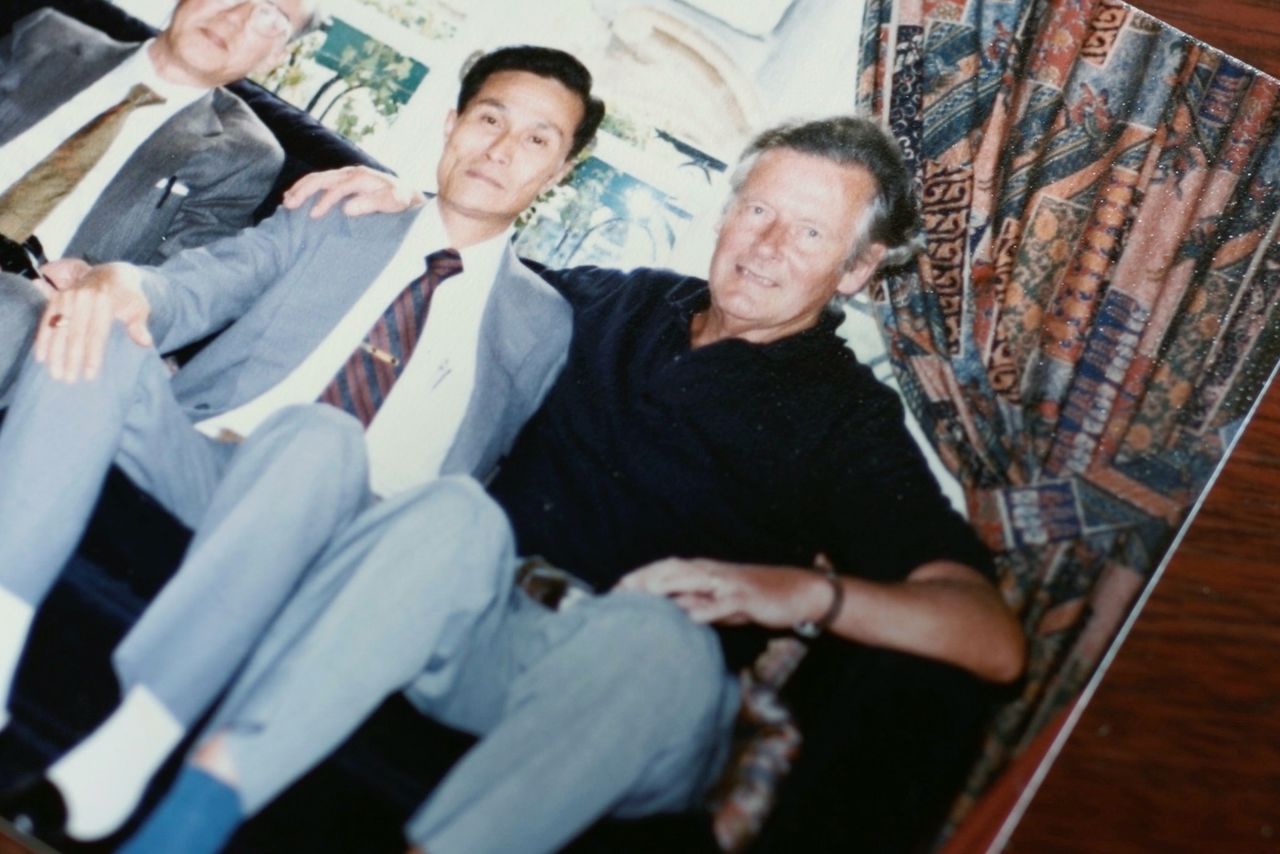 Taniguchi Sumiteru, at left, with Peter Townsend. (© The Postman from Nagasaki Film Partners)

As Kawase notes, “Here was this celebrated war hero who, in the twilight of his years, came to Nagasaki at the age of 68 with the aim of writing a book. That’s such an impressive act of determination, and that same seriousness is reflected in the in-depth research that uncovered such a wonderful wealth of detail for the book itself.”

Townsend himself died in 1995 at the age of 80, but he left behind a daughter, Isabelle, who had graced the covers of numerous fashion magazines as a leading model in the 1980s before moving into acting for stage and screen. Convinced that meeting Isabelle could provide vital inspiration for her project, Kawase made the journey to France to seek her out.

Isabelle remembers their first contact as follows: “Memories came flooding back from when I first read the book in my youth. The story of Sumiteru’s survival of the horror of the atom bomb had always stayed with me, and I remembered how impressed I had been by his strength, and also his very human dignity.”

And for Isabelle, this encounter with a filmmaker inspired by her beloved father’s work also provided an opportunity to reconnect with him 21 years after his passing. 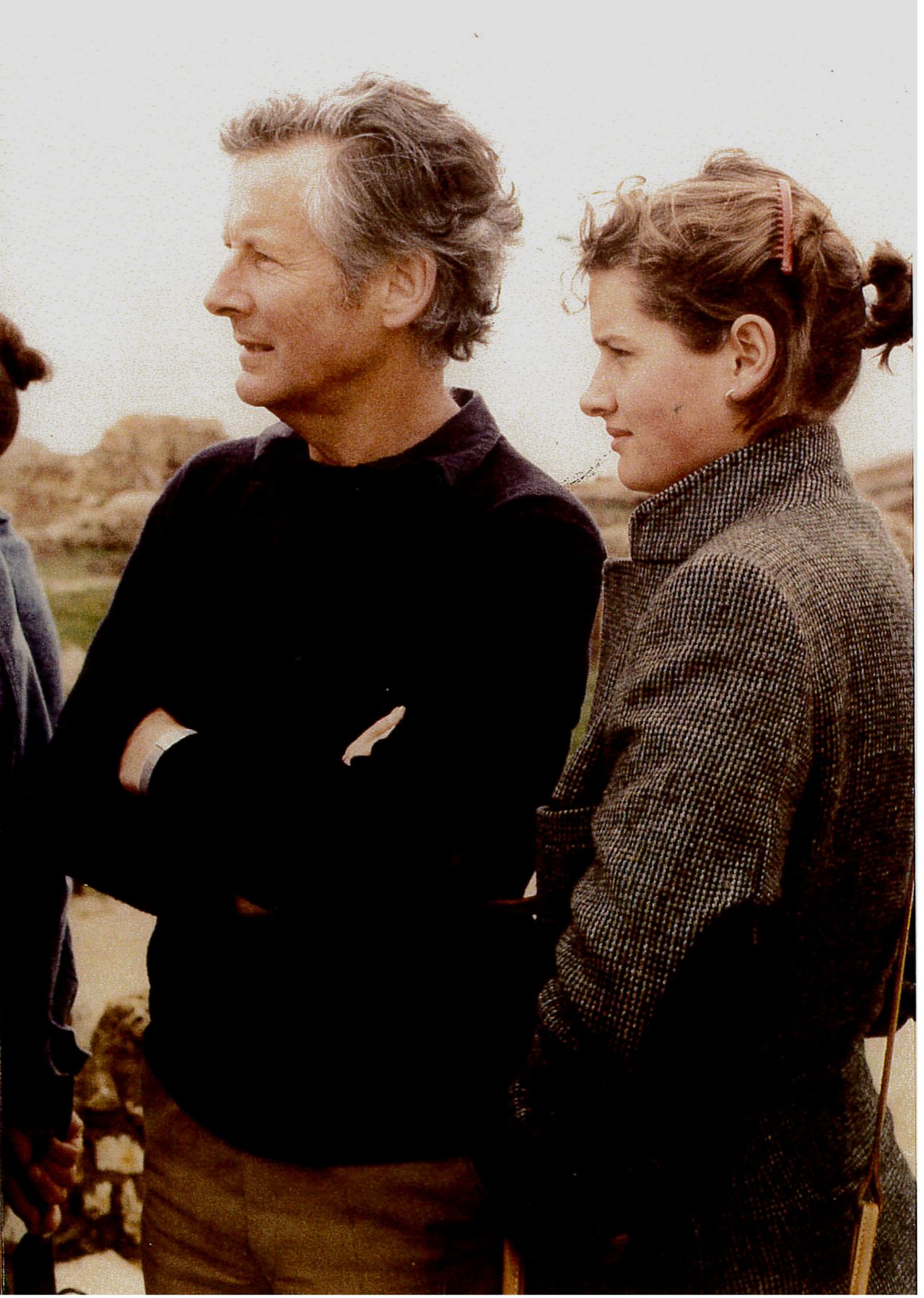 Isabelle Townsend with her father. (© The Postman from Nagasaki Film Partners)

“At home, my father never really spoke about his work. And although I read his books, back then I was still so young that I couldn’t really digest them in full. But I was drawn to the same things Mika was trying to find out, and I thought it was a chance to learn more about my father’s work, and about Sumiteru, his life, his family, and his lifelong mission.”

For Kawase, too, meeting Isabelle provided the direction that her project was in need of. “I knew I didn’t want to make a biopic, and that I definitely wanted to focus the lens on people who were still with us and address how historical themes remain relevant to the issues we face today. I saw Isabelle felt the same way, and I knew we could create something together.”

She gradually arrived at the concept of following Isabelle as she retraced her father’s footsteps to Nagasaki. But just as concrete arrangements began to take shape, Taniguchi passed away.

“Even now, it saddens me to think about it,” says Townsend. “Sumiteru and my father shared such a beautiful bond, and they stayed in touch for years and years until my father died. Having both experienced war from such different perspectives, I’m sure they must have had so much to talk about, and they were united by their strong desire for peace. I wish I had come to Japan sooner, because I really wanted to meet Sumiteru. But the silver lining is that before he passed, he knew that Mika and I were planning on making this movie.”

Kawase enthuses: “Isabelle was such a stalwart. No matter what issues came along she would never just give in, and she was constantly encouraging me, too.” 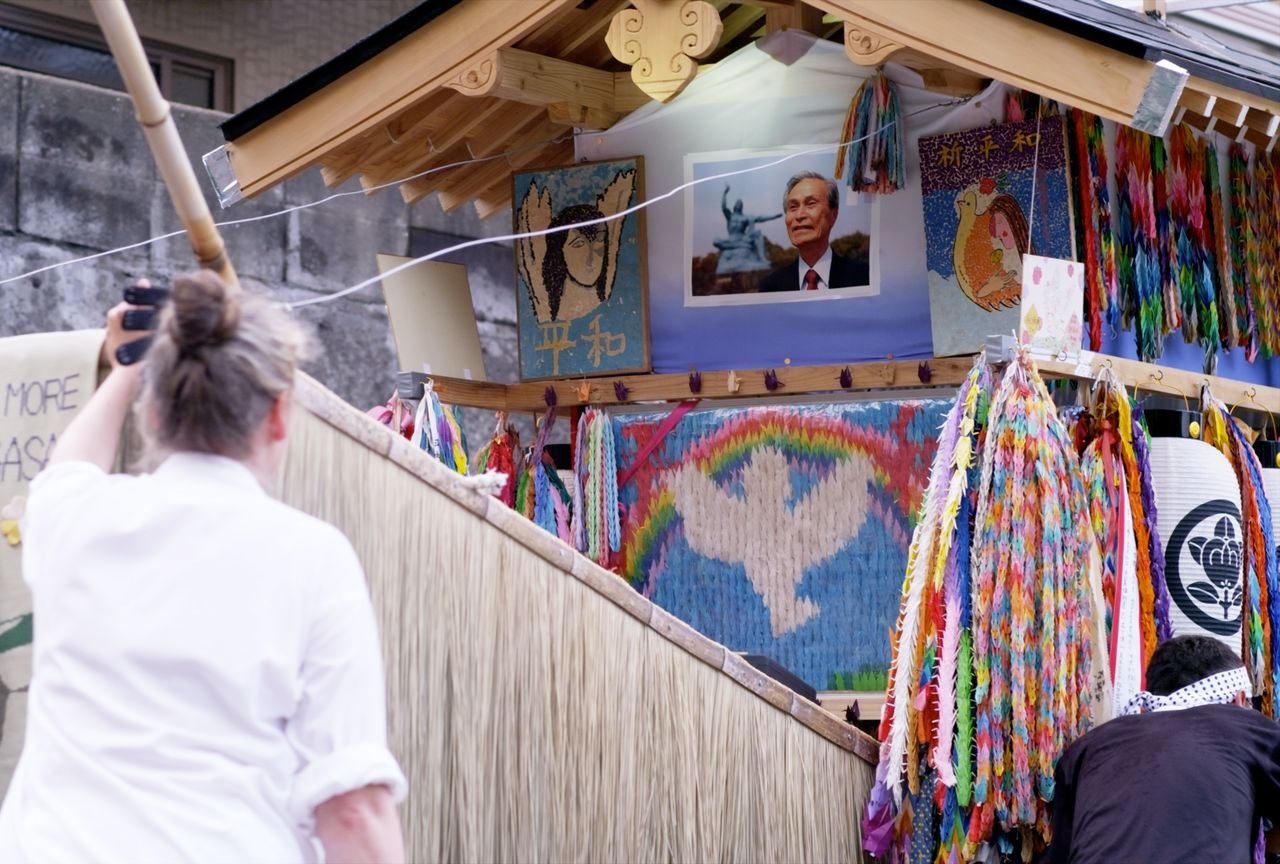 Isabelle also found 10 tapes of original interviews in her father’s study, and it was through listening closely to those that Kawase’s concept began to take shape. One recording in particular, from an appearance by Peter Townsend on a French radio show, contained, in simple French, a pronouncement that struck a chord deep within Kawase’s breast. Notes the director: “He said, ‘In war, I killed people. So I felt it was my duty to convey the realities of war as a writer.’ When I heard those words, I knew we couldn’t back out. It was like Peter was standing behind me, urging me on.” 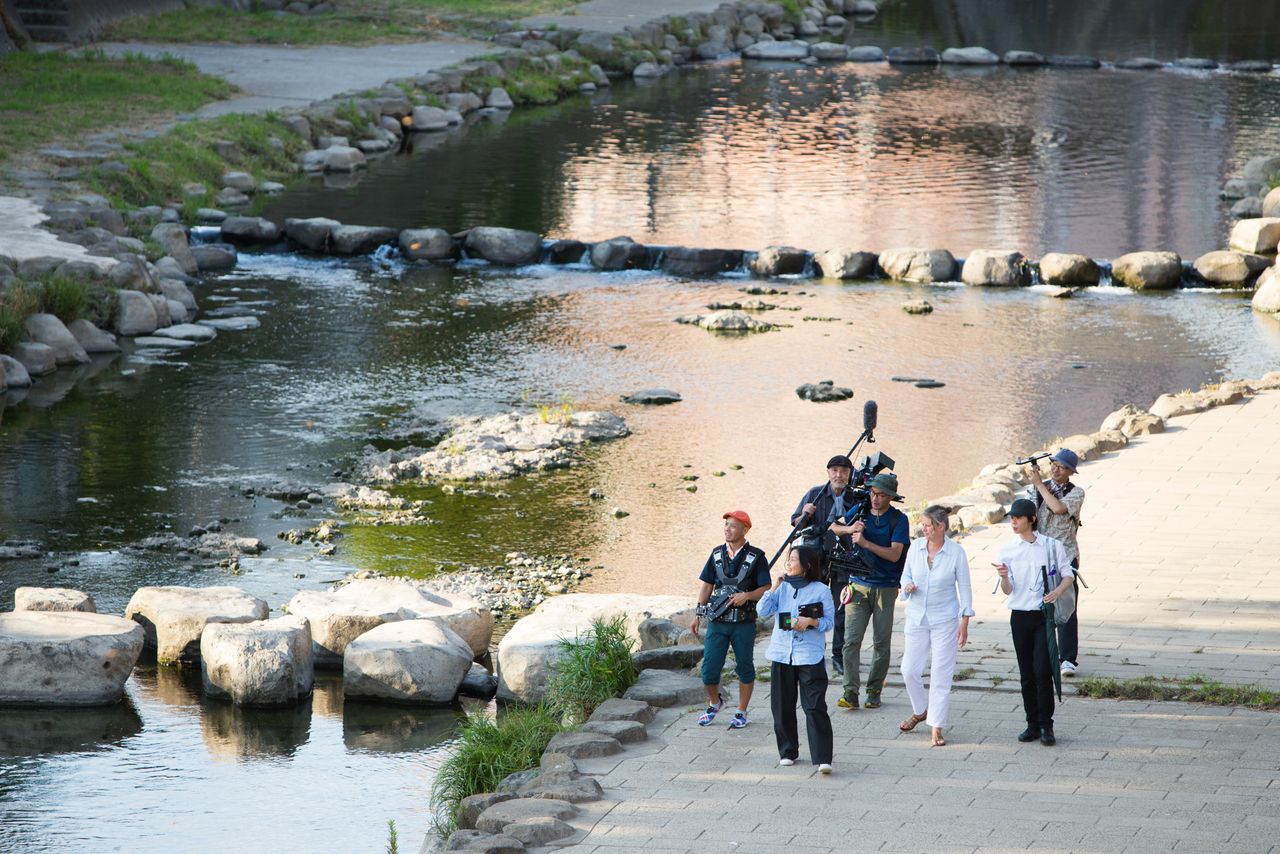 “This film is the product of years of hard work together since we first met in 2016,” says Townsend. “Mika and I overcame cultural differences and language barriers to forge a real bond of trust, because we both shared that drive to convey a message of peace.”

Passing the Torch to the Next Generation

In August 2018, timed to coincide with the first Obon since Taniguchi Sumiteru’s passing, Isabelle retraced her father’s footsteps to Nagasaki alongside her husband and two daughters. The camera simply follows along and quietly captures Isabelle’s expressions as she is brought closer to her father at each location they visit. 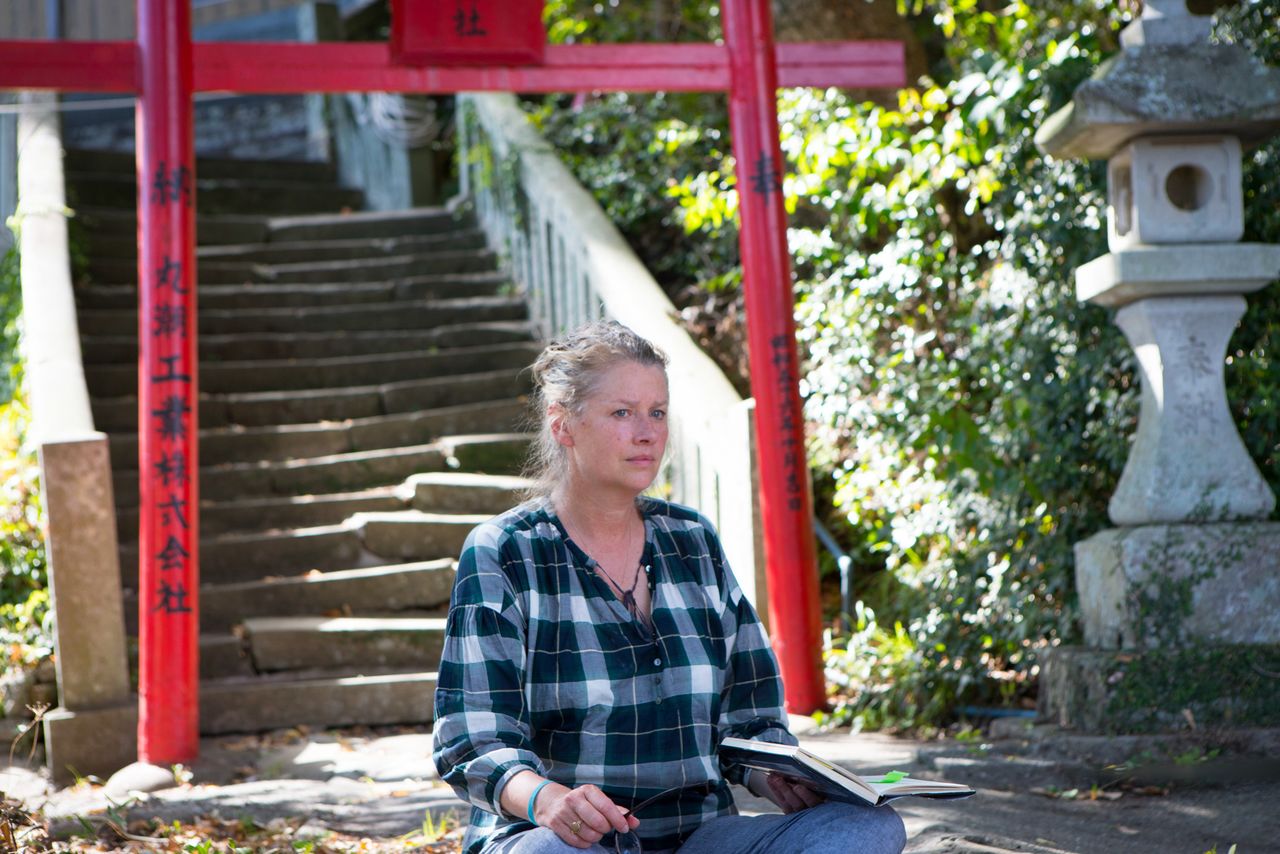 The film follows Isabelle to numerous sites visited by her father. (© The Postman from Nagasaki Film Partners/Sakamoto Ayumi)

Reading her father’s book on his visit to Nagasaki helped her understand everything on a much more concrete level, says Townsend. “He himself had experienced war, and sadly, in order to protect his own country, had no choice but to take the lives of others, and at last I understood that pain. At the same time, I feel like my father found a kind of peace in Japan, and I finally understood why he fell so deeply in love with Japanese culture. He was profoundly affected by the Japanese spirit, the respect for others, and the relationship with nature.” 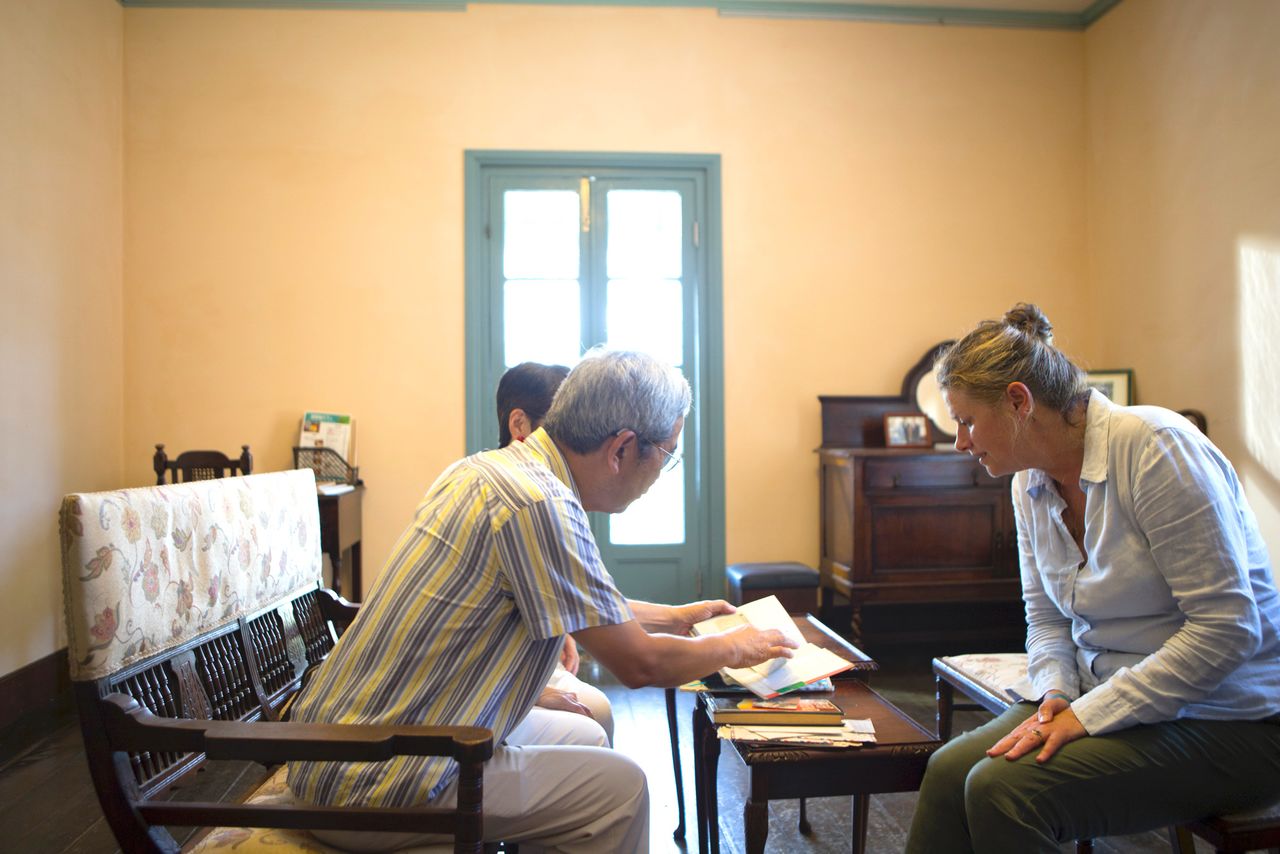 Originally planned for release in 2020 to mark the seventy-fifth anniversary of the atomic bombings of Hiroshima and Nagasaki, but delayed by the global pandemic, the film, entitled The Postman from Nagasaki, was finally released in Japan in the summer of 2022. But for Kawase Mika and Isabelle Townsend, the mission is far from over. 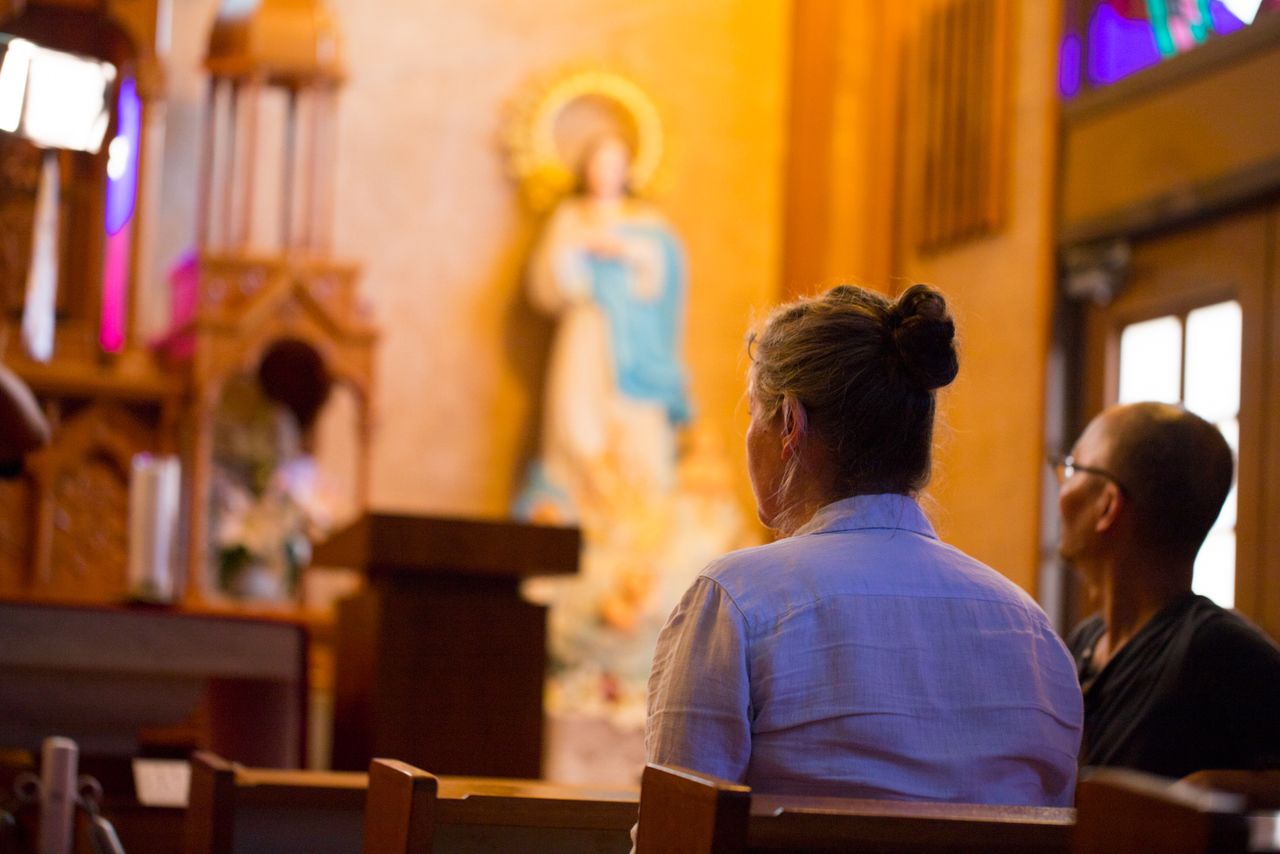 “I think now at last I can say that The Postman of Nagasaki is the most important of all my father’s works,” says Townsend. “And at present, with continuing wars and Russia’s invasion of Ukraine, I think the message of nuclear disarmament is especially pertinent. The release of the film has come at a very significant time, and it contains a message that my father and his dear friend felt they had to convey. I hope that will come across to as many young people as possible.”

Kawase adds: “This is only the beginning. My aim was to create something that could resonate with successive generations. And I hope that this film can live up to that role.” 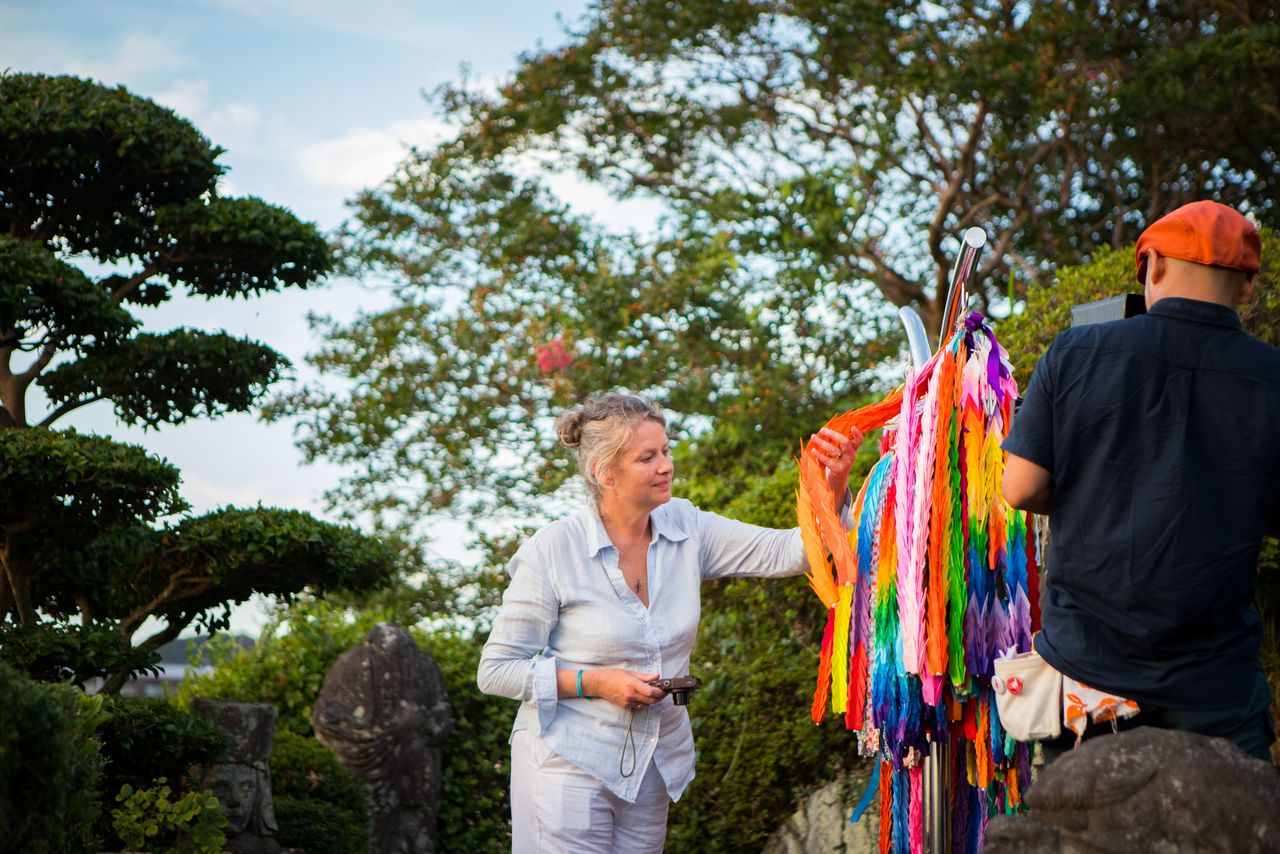 (Originally published in Japanese on August 4, 2022. Banner photo: Isabelle Townsend in a still from the film. © The Postman from Nagasaki Film Partners/Sakamoto Ayumi.) 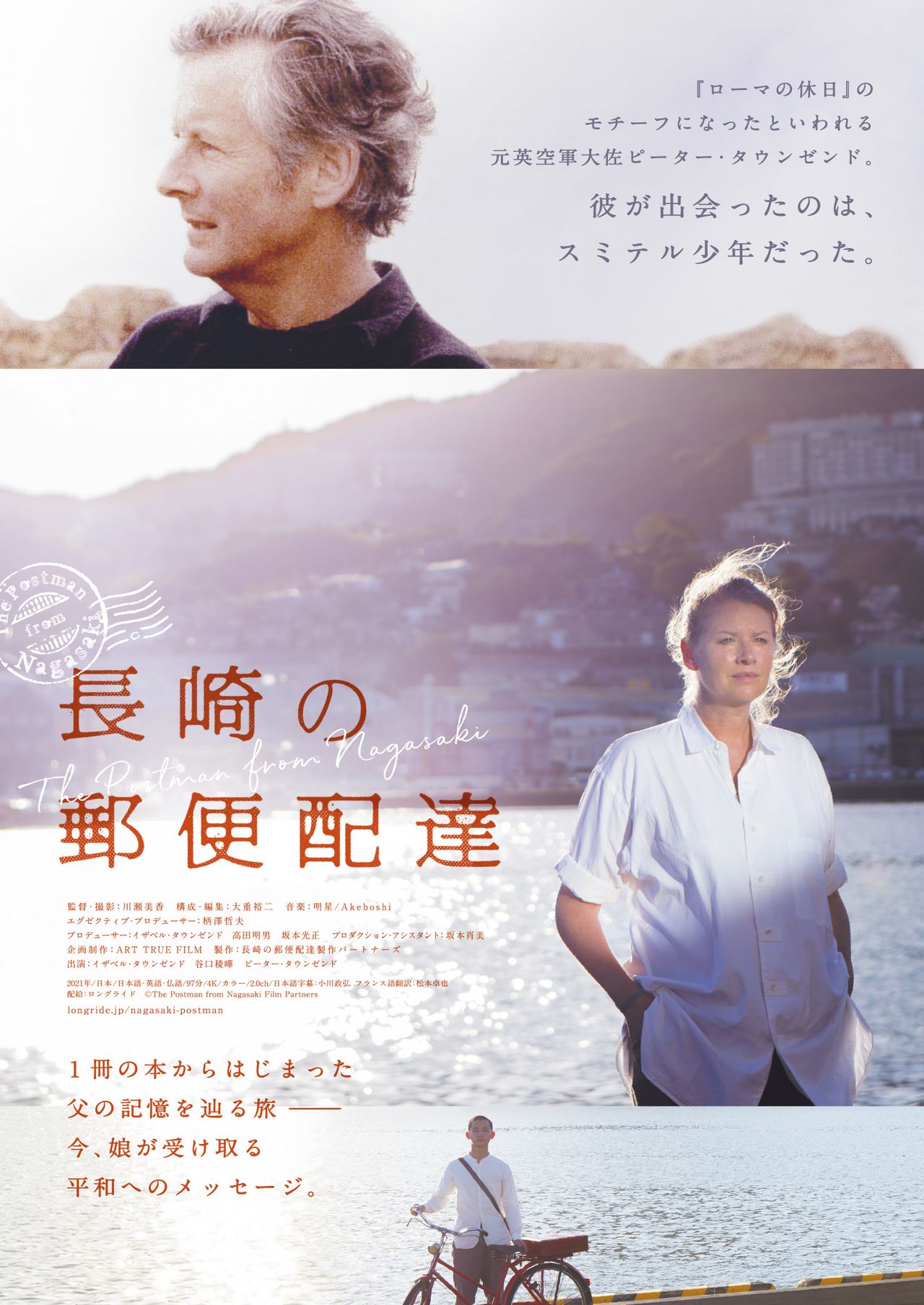 The Postman from Nagasaki