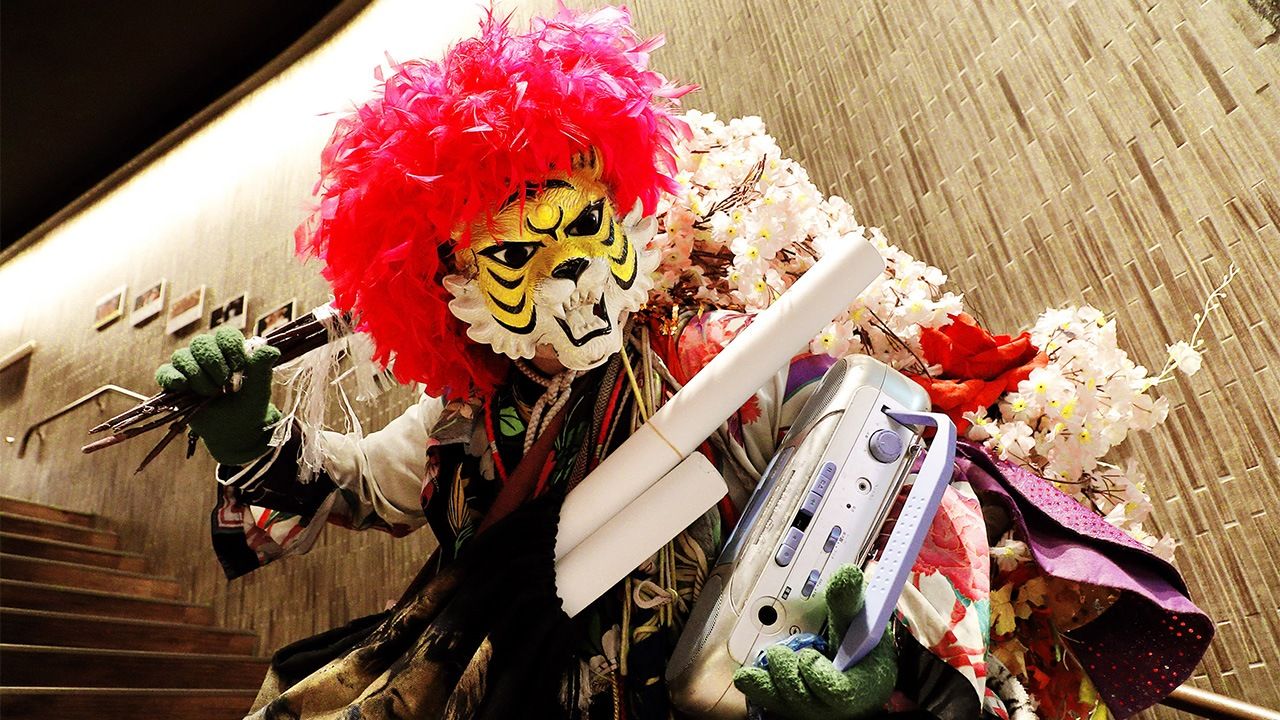 Culture Cinema May 15, 2019
Shinjuku Tiger, a new Japanese documentary, is named after its subject, a colorful figure who has been a feature of the Shinjuku scene since the 1970s. 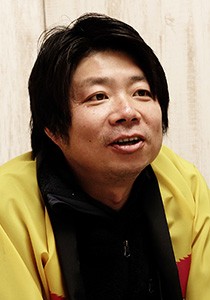 Independent filmmaker and freelance television director. Born in 1975. His first two films were Bad Child and Her Mother, which was entered in the 2016 Busan International Film Festival.

If you frequent the Kabukichō section of Shinjuku, you may well have seen him. He rides around on a bicycle wearing a tiger mask and an outlandish costume, with Japanese enka music playing on his boom box. This man, who has come to be known as “Shinjuku Tiger,” has been diligently delivering newspapers morning and evening in this getup ever since 1972.

Shinjuku Tiger has been the subject of coverage in a variety of media, including television and magazines, and was featured on an advertising poster for the Shinjuku branch of Tower Records. For some he is now a symbol of the district’s diverse counterculture. 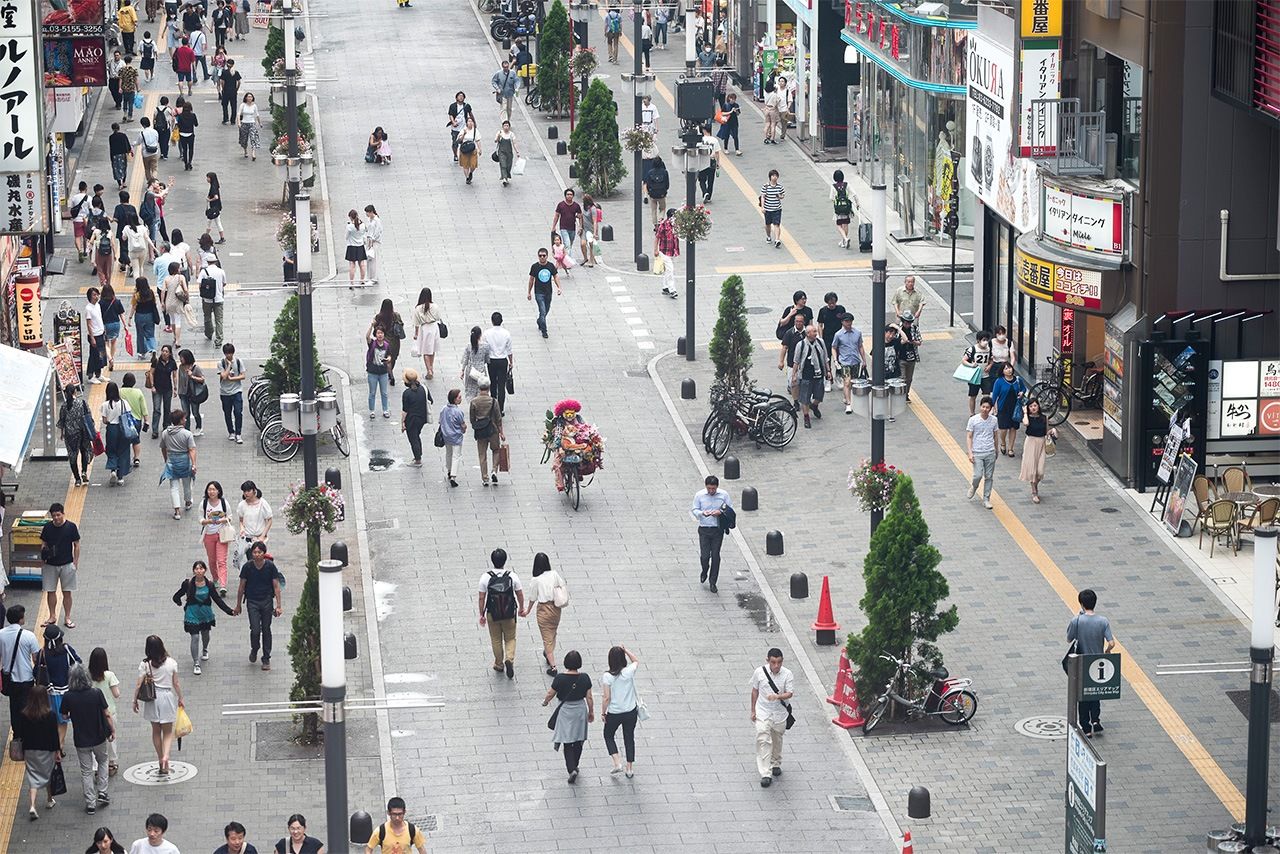 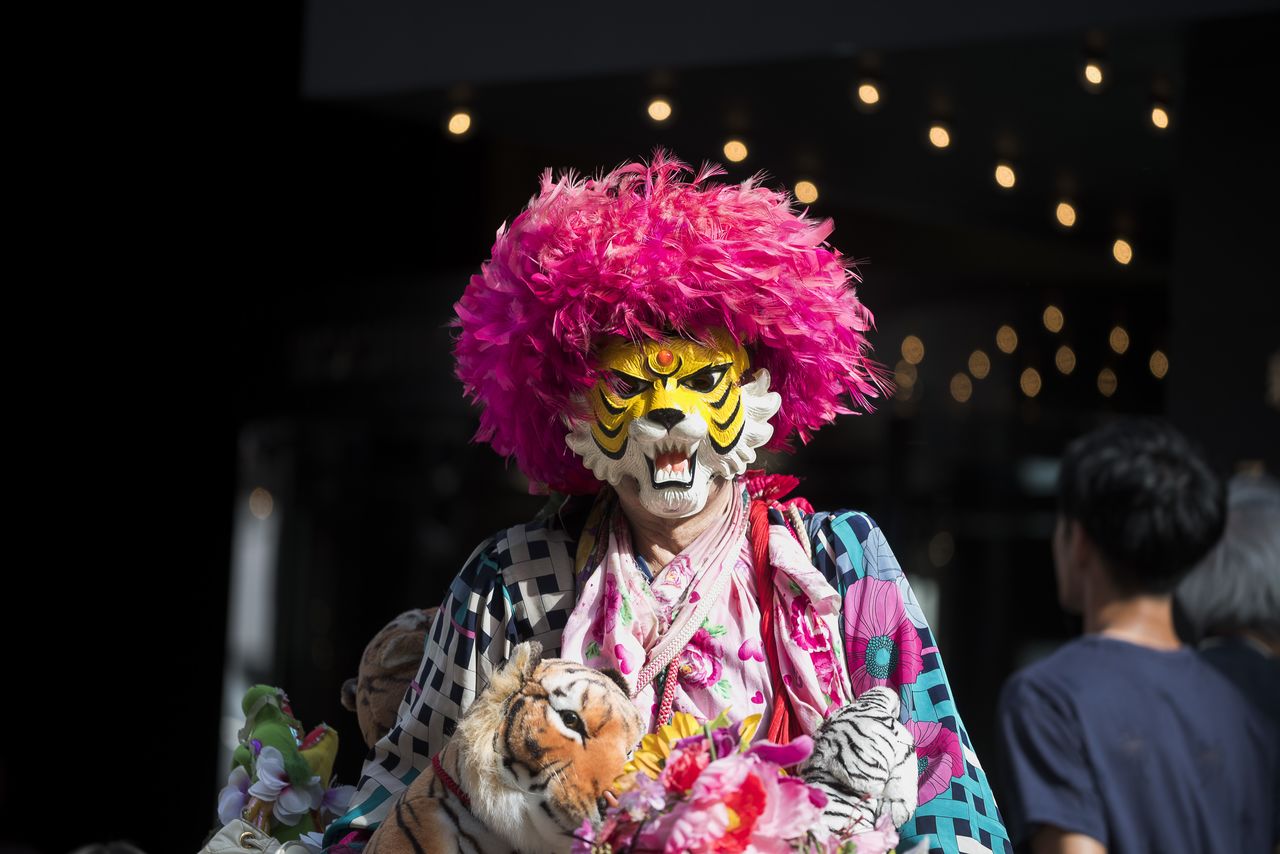 If there were no Shinjuku, there wouldn’t have been a Shinjuku Tiger,” he says. “That’s how much I love this town. Shinjuku Station is tops in passenger numbers. All the train lines that meet up here make this town an inland seaport."

The man, who hails from Nagano Prefecture, came to Tokyo to attend Daitō Bunka University. At first he lived in Nerima, but after two years he dropped out and drifted, before ending up in Shinjuku, where he found work as a newspaper deliveryman for the Asahi Shimbun. Shortly after he started at this job, he happened to go to a festival at the Inari Kiō Shrine just behind the newspaper’s sales and delivery office. One of the offerings at a booth selling masks for children was the tiger face worn by the pro wrestler character featured in an anime series that was popular at the time. “That’s it!” he thought. “I’m going to spend my life as a tiger living in this asphalt jungle of Shinjuku.” He later bought 30 of these masks, which he took to wearing whenever he left home. Thus was born Shinjuku Tiger.

This peculiar personage is the subject of a recently released full-length documentary film by Satō Yoshinori. For Satō it was quite a change from his previous work, which was a drama about a murderer on death row and the family of the victim.

The Making of the Movie

INTERVIEWER  I understand this was your first documentary. How did you come to make it? 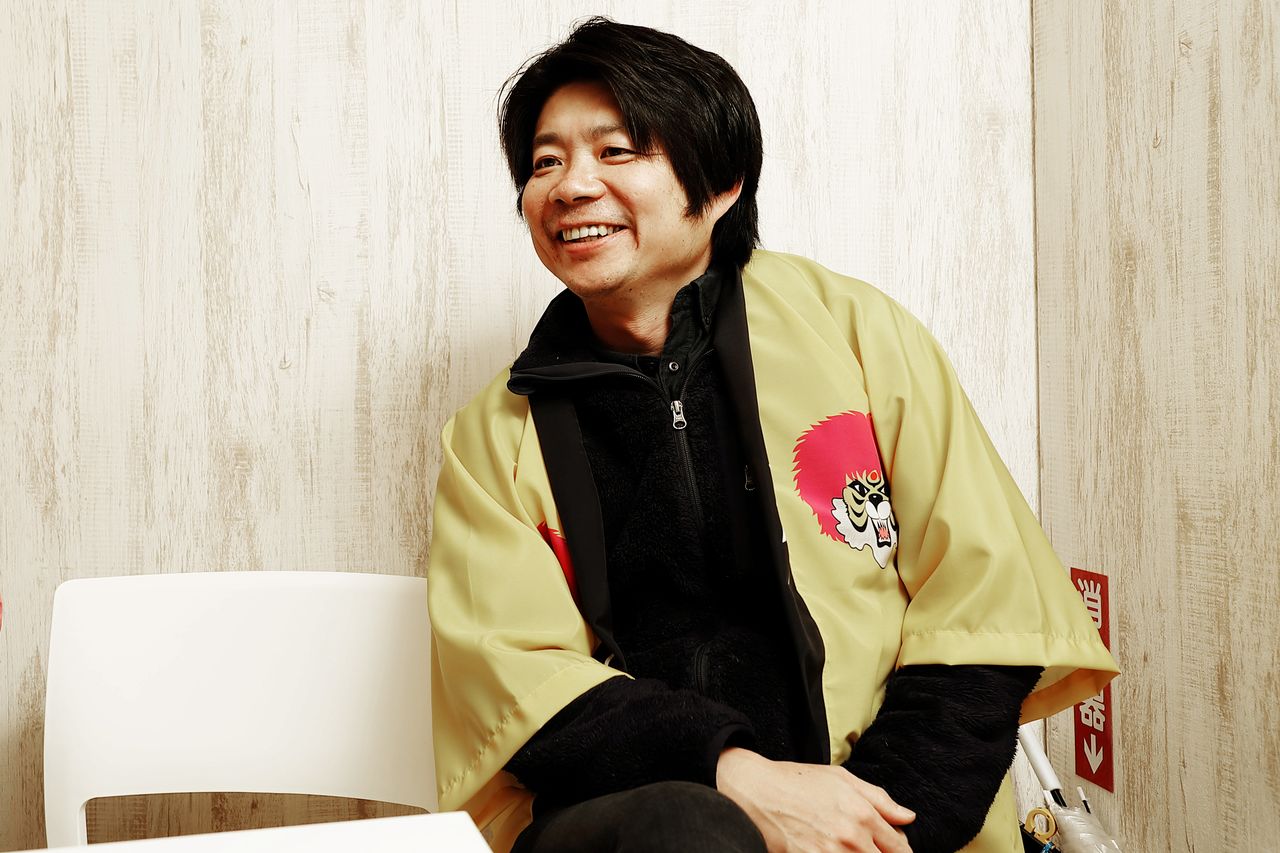 Director Satō Yoshinori did everything from shooting the documentary to editing it.

SATŌ YOSHINORI  The distributing agency for my previous film broached the subject to me. They showed me photos of what they called “this strange man in Shinjuku,” and I was intrigued. I wanted first of all to find out what sort of person he was.

SHINJUKU TIGER  The offer came in 2017. I met three times with the agency president and Satō at a coffee shop in Shinjuku. We talked for three hours each time, nine hours total. The shooting started the following year and continued throughout the year—thirty-six sessions in all. Sometimes the camera was running for five or six hours straight. And then he managed to condense this huge mass of video into eighty-three minutes. Isn’t he amazing? 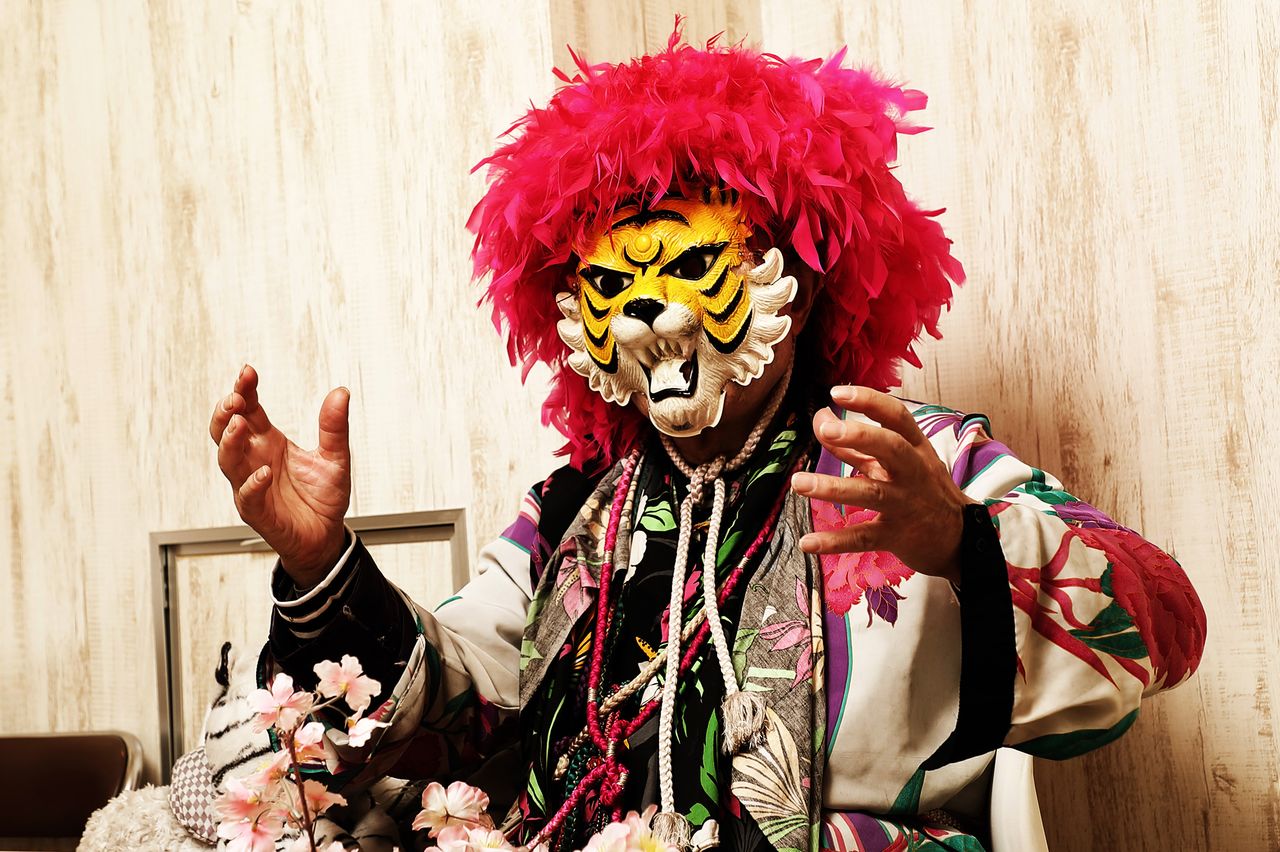 INTERVIEWER  Most of it consists of you talking to women.

TIGER  That’s right. You see, I have three themes in my life: movies, beautiful women, and dreams. I didn’t want to be in a movie that wasn’t about these themes. I approached actresses that I’ve made friends with in Golden Gai [a warren of alleys lined with tiny bars in Shinjuku] and asked them to appear with me in the movie. After they agreed, Satō filmed us as we drank and talked.

SATŌ  I filmed Tiger in situations where he was enjoying himself. He’d call me to say he was about to go out drinking, and I’d rush to join him with my camera. Then I’d do my best to fade into the background, just getting video of Tiger having a good time. 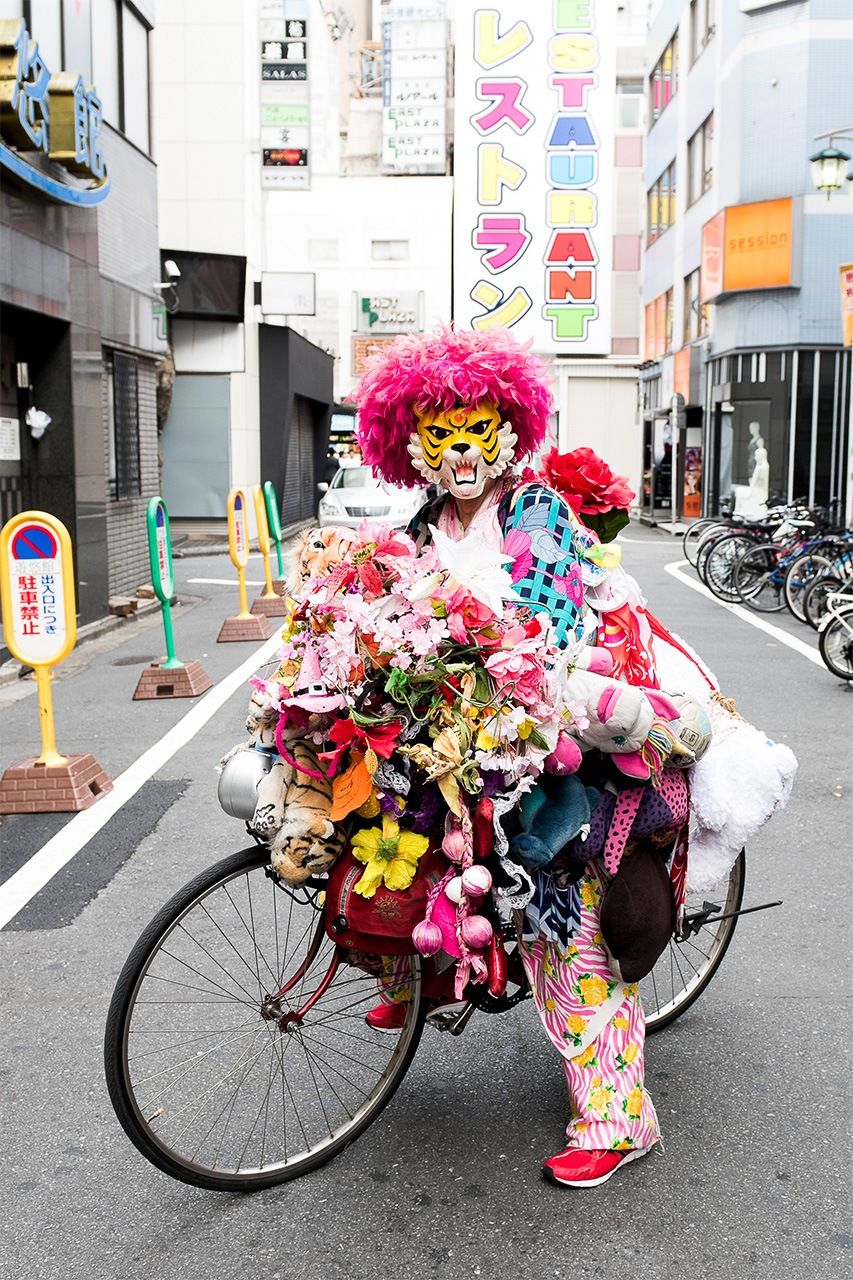 INTERVIEWER  Was that the way you were planning to do it from the start?

SATŌ  I saw Tiger as being connected to the history of Shinjuku’s counterculture. And I thought I could examine Shinjuku through him, a person who has lived and worked there for over forty-five years. But as I got to know him, I fell for his bright, cheery personality, and that’s what I ended up focusing on.

TIGER  This is my daily life, I told him, and I encouraged him to film it just as it was. And it turned out great, with natural performances by the beautiful women who appear. I tell them they’re so stellar that they must have been born with stars in their hands. And I’m not flattering them, either. I say that based on seeing them on stage and in movies.

SATŌ  I selected scenes showing Tiger and the actresses as they really are. And when we were done filming, I considered the composition and fit the segments into that. When we started, I had a general idea of how I’d compose the film, and I firmed up the details as we did the shooting. A lot of things happened on location that were more interesting than what I had in mind.

TIGER  Satō’s composition is brilliant. He divided up the content according to my three themes—movies, beauties, and dreams—and through the film he interprets the deeper significance of each theme. 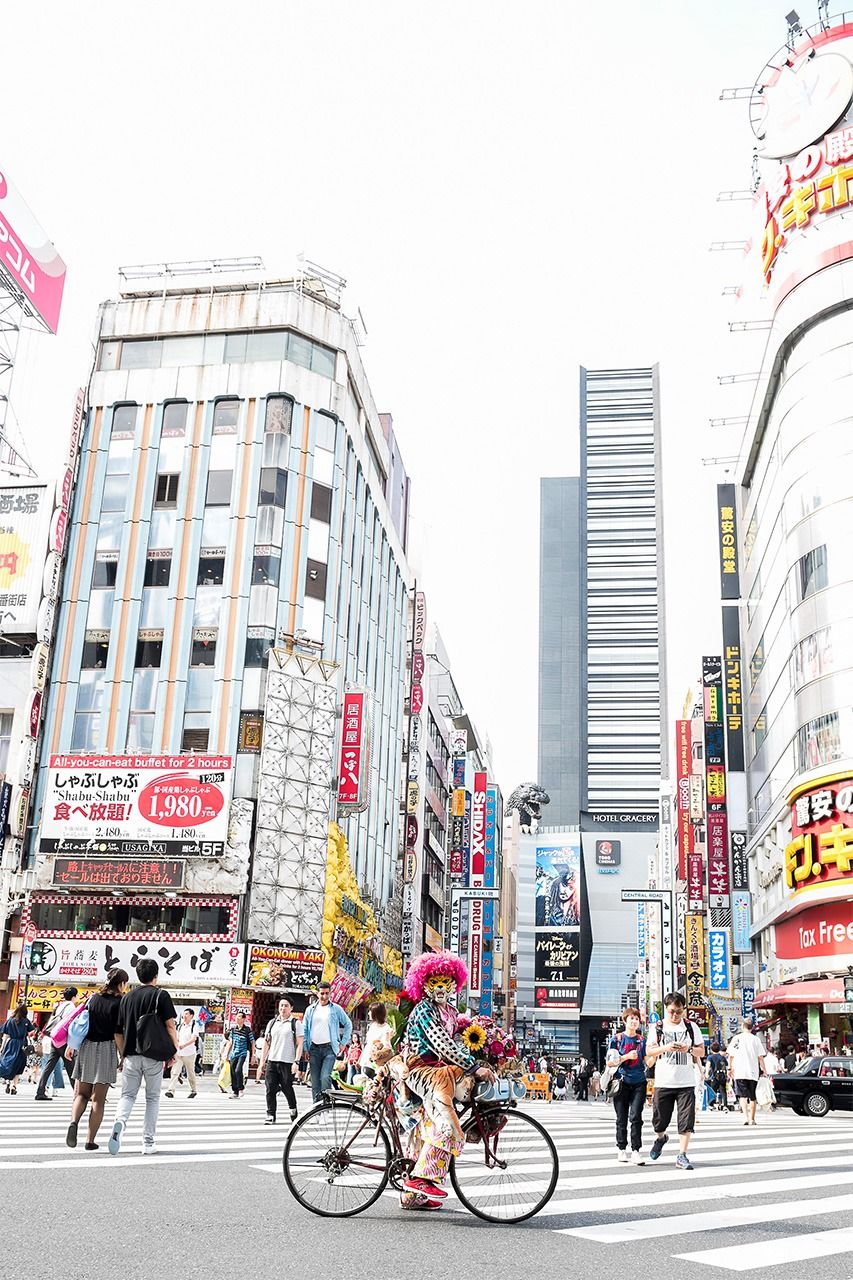 INTERVIEWER  I hear Tiger is “crazy about movies” and has watched as many as six movies in a single day. It was touching to see him watching Roman Holiday. [Tiger takes his mask off when the film begins.]

SATŌ  I wanted to film his face while looking at a movie screen. I had seen it for myself, and it immediately made me like him. “This is somebody I can trust,” I thought. Tiger pours his entire being into what he’s watching. It’s the pure face of a man in love.

TIGER  Audrey [Hepburn] is my idol. For the tiger to be filmed while watching her in the theater was like a dream for me. I’ve seen that movie more than a dozen times, but it was really special this time, because it felt like the princess and the tiger were on the screen together. 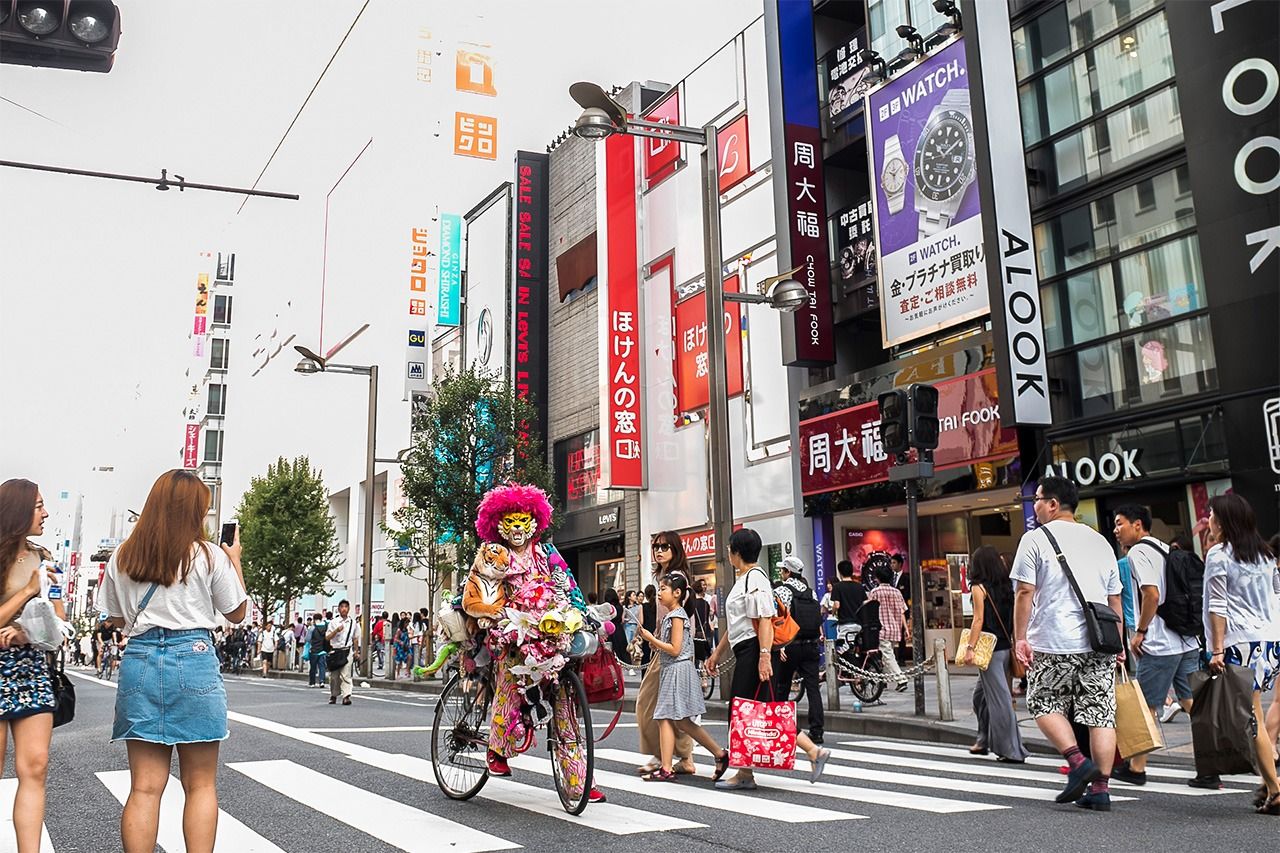 Tiger rides his bike past the former branch of Mitsukoshi Department Store (large white building in the background) on Shinjuku-dōri.

INTERVIEWER  You’ve been observing Shinjuku since the 1970s, in which time the area has undergone a great metamorphosis.

TIGER  Shinjuku has been cleaned up. You just have to go with the flow of the changing times. That reminds me of the time back when they were filming for a TV drama in front of the old Mitsukoshi Department Store. I went to see what was up, and an actress noticed me and called to me by name. We didn’t really know each other that well at the time. It was before she had become a big name. But I had given her the newspaper. I’m always giving copies of the paper to beautiful women.

INTERVIEWER  I heard you create your attire yourself with materials from a local fabric shop, using safety pins to hold it all together.

TIGER  People give me these stuffed animals, and so my menagerie keeps growing. I call them my family. You know who gave me this bear? Waka Miho [stripper and adult-film actress Wakabayashi Miho]. I went to see the initial screening of a film she starred in, and when she was delivering her stage greeting, she saw me said, “Tiger, thanks for coming!” I got a hug from her, and she handed me this bear from the stage. It was in what they call a “tortoise shell” bondage harness. “You absolutely mustn’t untie it,” she said. I keep it with me constantly. In other words, I’m carrying her dream together with me. 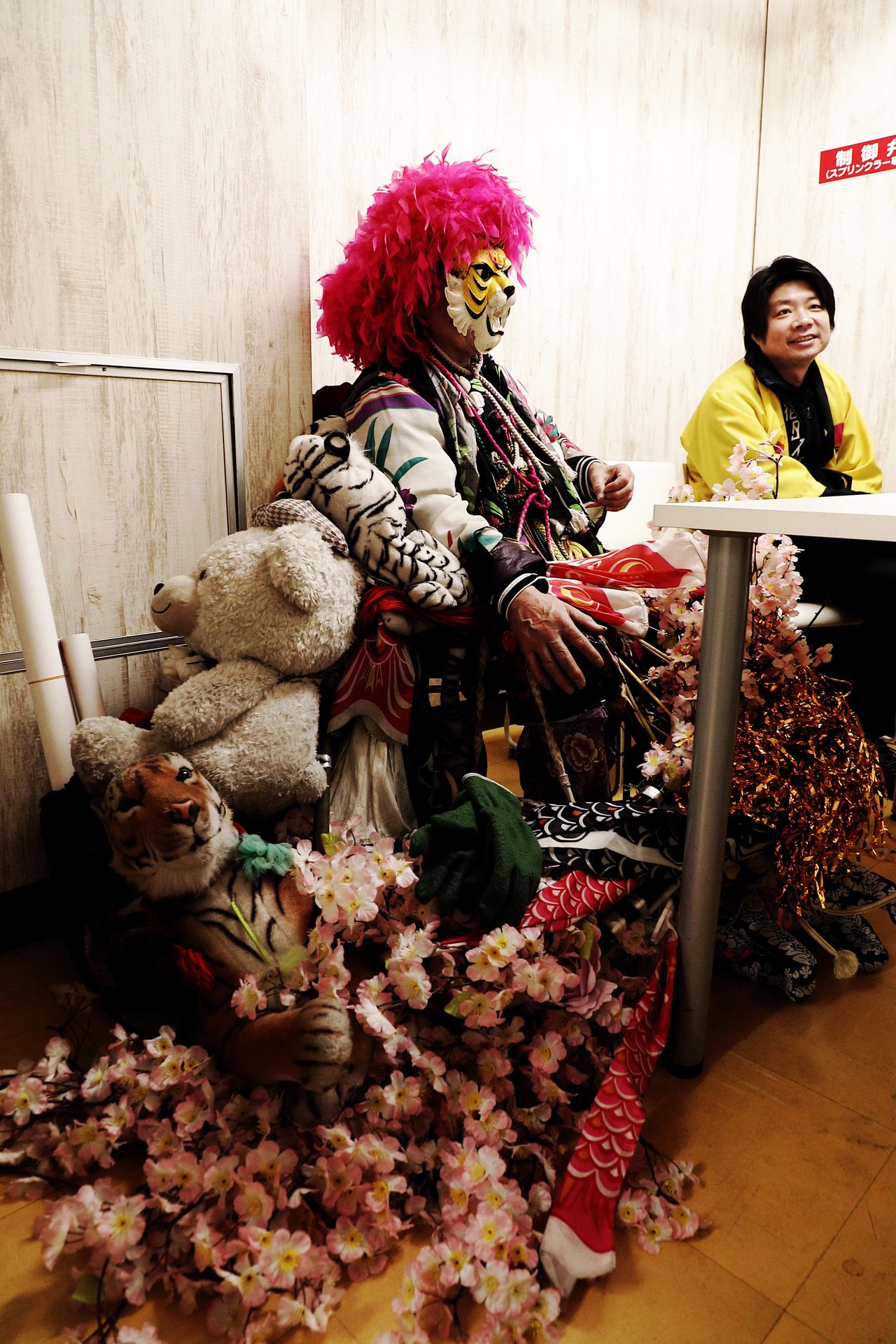 Shinjuku Tiger in his handmade costume, accompanied by his “family” of stuffed animals

INTERVIEWER  When you first took to wearing your outfit, I understand you came in for some jeering and harassment.

TIGER  Yes. But I don’t get mad at anything people do to me. And as for violence, well totally fuck that! If you let your anger out, that’s the end of it. I keep it inside and turn it into zeal. That gives me more energy. The tiger has none of the usual likes and dislikes of human beings. There’s just one exception: He absolutely adores beautiful women. He lives with Marilyn Monroe, Audrey Hepburn, Elizabeth Taylor, and Ingrid Bergman in his heart. His driving forces are beautiful women and movies. Without these he couldn’t keep up his energy.

A Contented Tiger Living His Dreams

INTERVIEWER  What sort of message do you think viewers will get from Tiger’s way of life?

SATŌ  The fact that he has kept delivering newspapers for all these years in this getup is amazing. He has made something difficult happen. You can’t do that unless you have a strong will. He has kept at the same thing all along, not for money but as his dream. I think this is ideal. People may want to live their dream, but their weakness generally prevents them from doing so. I want viewers to see that it’s possible, that somebody like Tiger actually exists.

TIGER  Money and power mean nothing to me. I let my dead brother’s three children have my entire share of my parents’ estate. I’ve never focused on money. It’s best not to let it fetter you at all. That’s what it means to be a tiger. 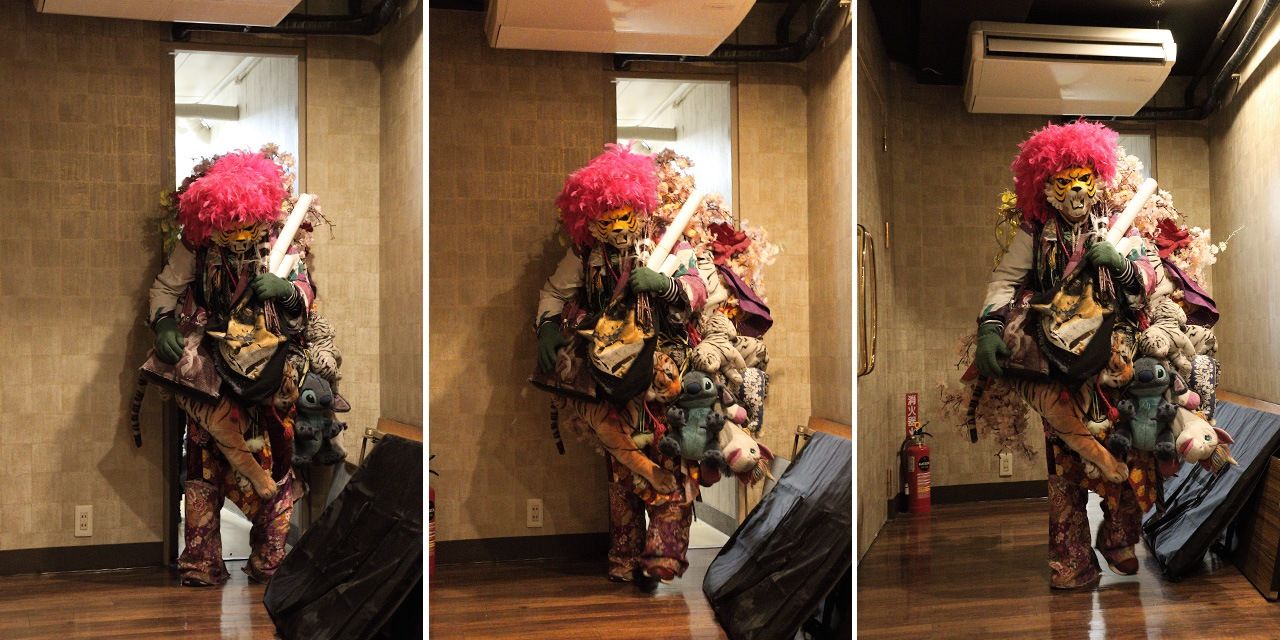 INTERVIEWER  You distribute newspapers, but do you read them?

TIGER  I just glance at the front page. It’s not that I have no interest in politics or social issues, but if it’s on the front page I can’t help seeing it. There’s never anything good written on the politics pages. But I do watch socially aware nonfiction films. When I see a movie, even if I find it uninteresting, I’m glad to have the experience of seeing it. There’s always something to gain. But I’m not involved in any sort of political or religious activity. For me it’s just movies and beautiful women. That’s what I believe in. I don’t need anything else.

TIGER  Lots of people say pessimistic things, but it’s best to have happy thoughts. It’s a tough world, and if you let the darkness get to you, you get dark too. You need to find some light in the darkness, even if it’s faint. If you can wield both light and darkness, your possibilities are infinite. And if you watch Star Wars and Star Trek, you realize how small human beings are when they venture out into space. 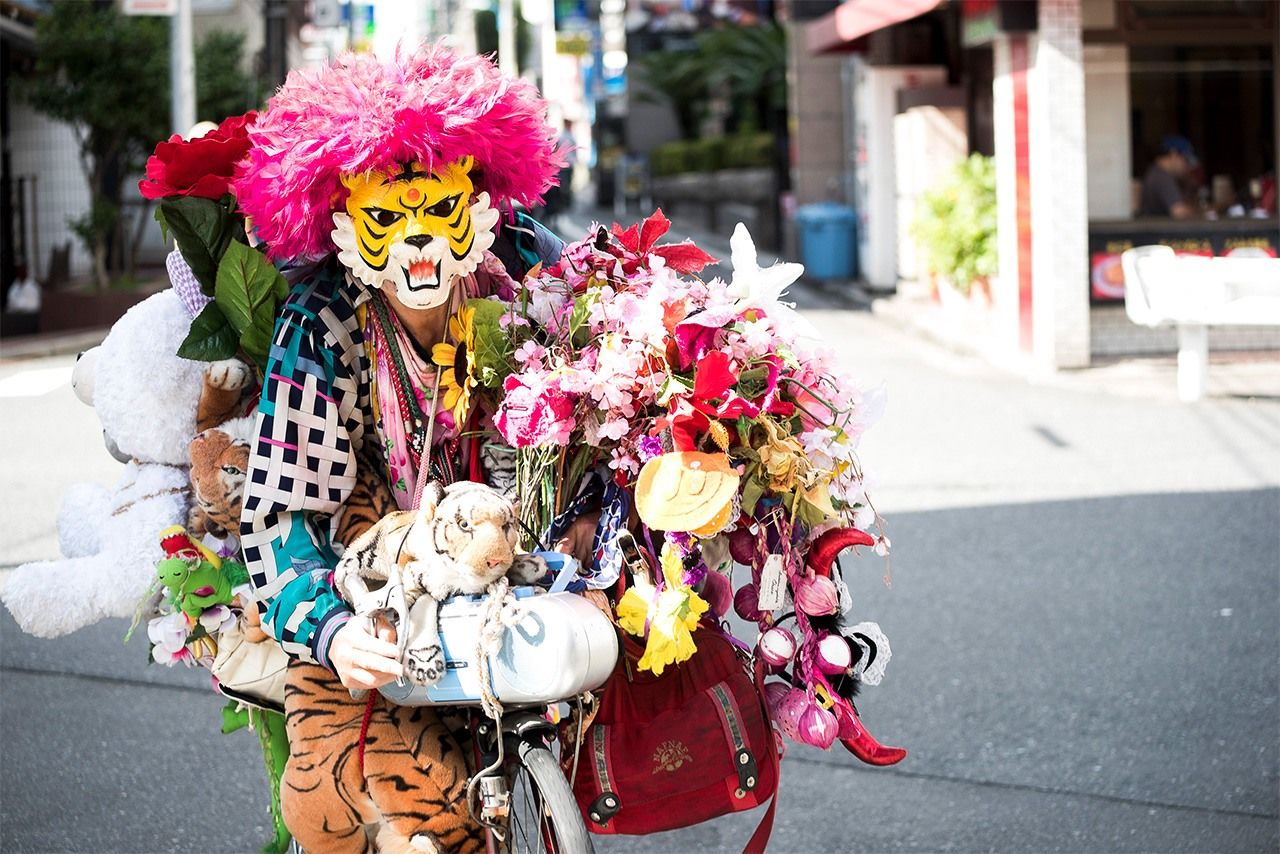 INTERVIEWER  Did you gain anything by making a film in a style different from anything you had done before?

SATŌ  Up to now my thinking about films didn’t include the concept of bringing dreams into the foreground. But for me, Tiger was a dream incarnate, and I wanted to show that. It was an eye-opener to see that somebody could express themselves the way he does. In my next work, I intend to return to the topic of my previous film, which dealt with the death penalty.

TIGER  The film Satō made this time presented me in an attractive light and gave a clear view all the way inside my heart. His work is amazing—better than perfect. What he shot was the real me, but what we see on the screen has enhanced power and looks like a dream. I was overwhelmed to see it. Frankly he’s a genius.

SATŌ  See, he talks like that not just to beautiful women but to men too. And it feels good to be flattered. 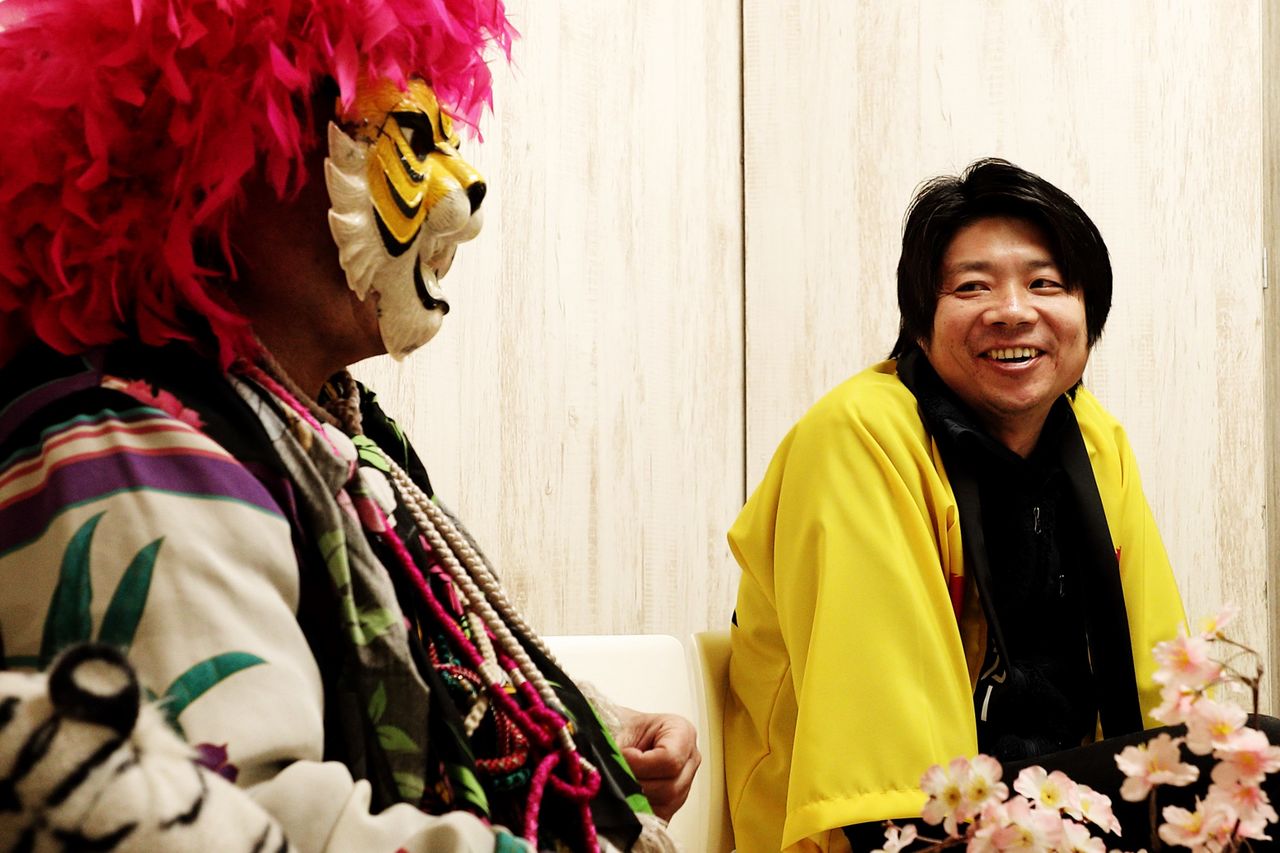