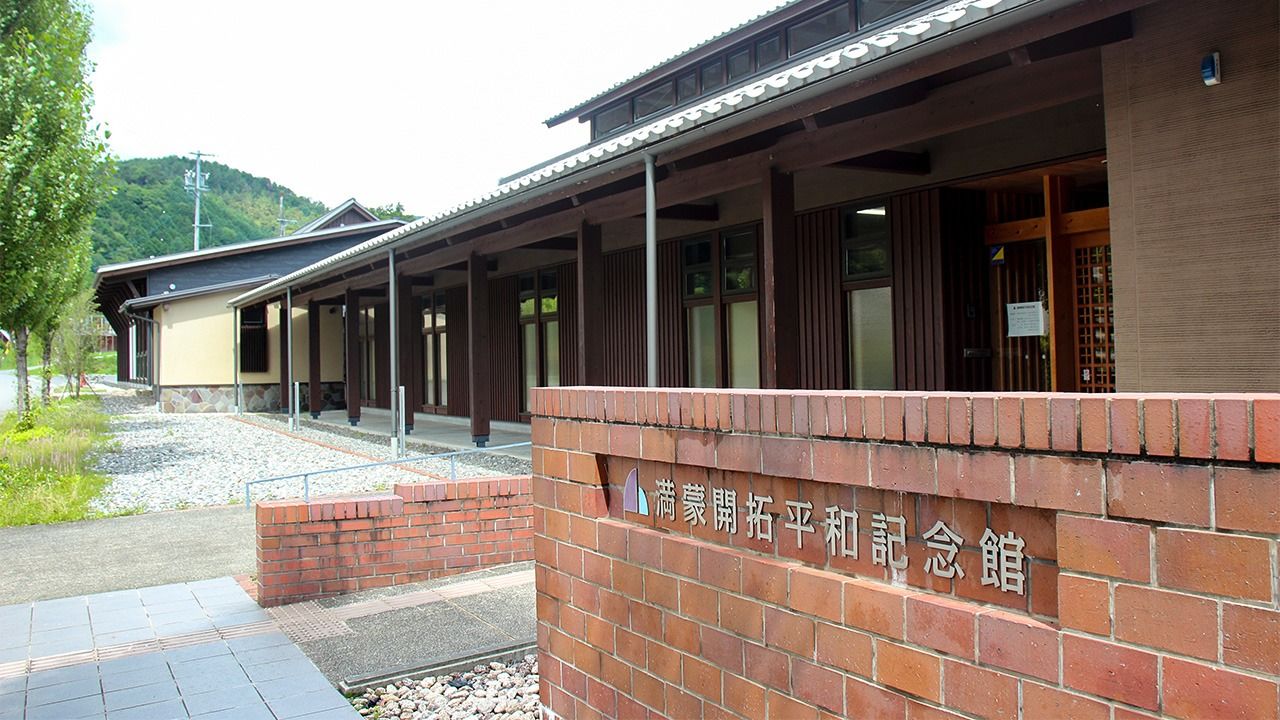 The War and Its Aftermath

Society History Aug 10, 2021
A museum in the mountains of Nagano Prefecture recounts the stories of the some 270,000 Japanese who migrated to the former-Manchuria under governmental schemes and the hardships they endured after Japan’s defeat.

The Memorial Museum for Agricultural Emigrants to Manchuria, opened in 2013, is located in Achi, a town of 6,300 in the mountains of southern Nagano Prefecture. It recounts the hardships of 270,000 Japanese who migrated to the former-Manchuria under governmental schemes. In August 1945, when Soviet forces invaded Japanese-held territory, settlers in Manchuria sought to flee, only to be met with famine, illness, and death. The museum preserves their history and serves as a place where survivors can share their experiences with younger generations. 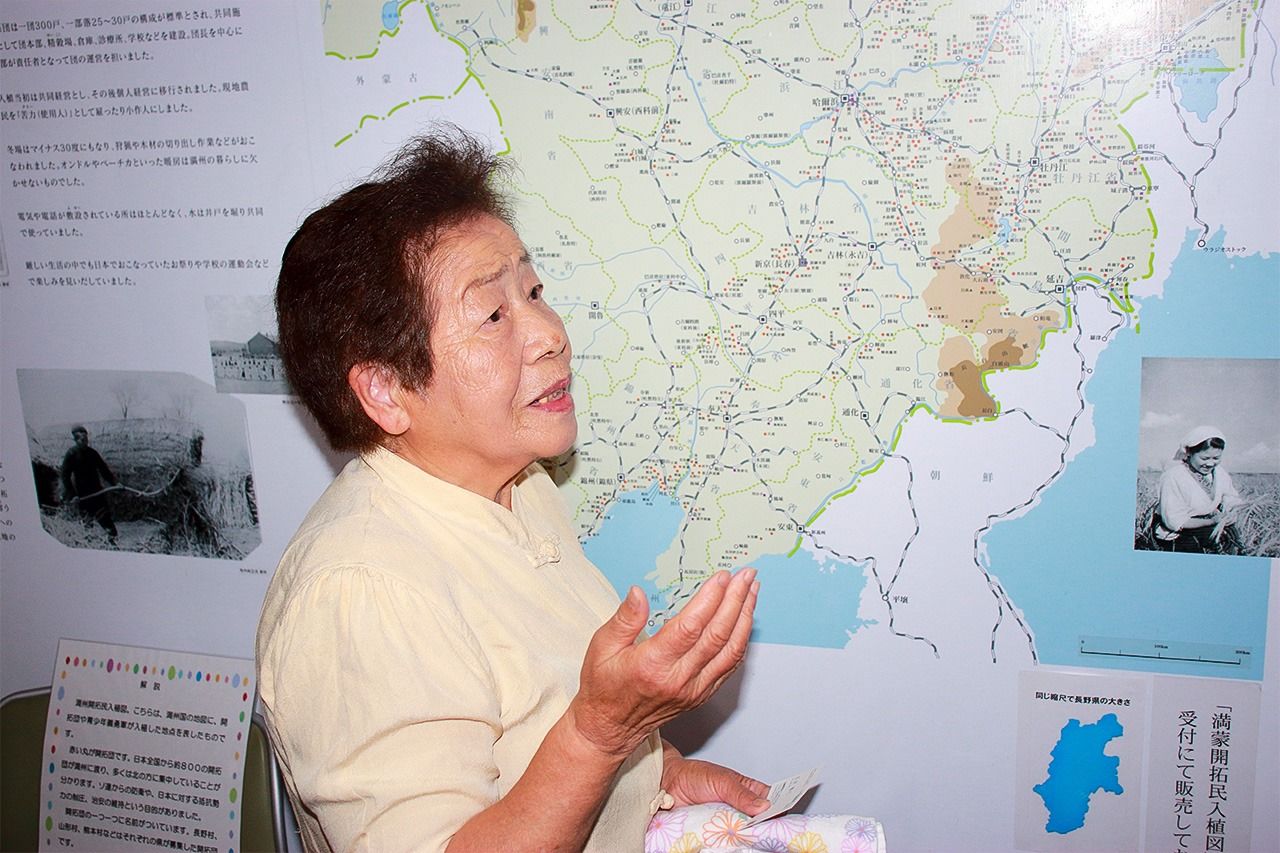 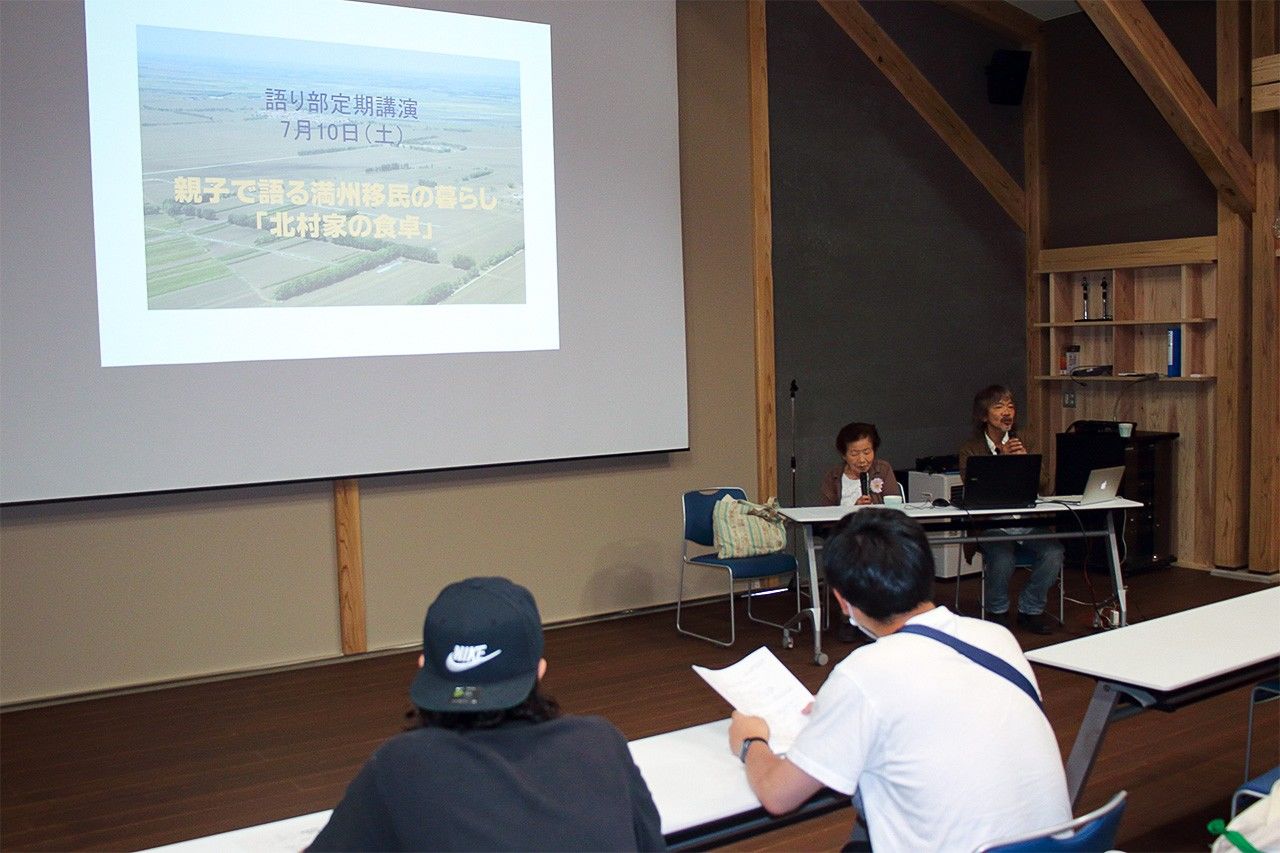 One of the regular talks at the museum given by former emigrants.

Only five of Kitamura’s eight family members survived and returned to Japan. Her father was drafted into the military as Japan shifted to total mobilization. After Japan’s defeat, he was interred in Siberia by the Soviets. She believes he eventually made his way to Korea, where he died, although she has not yet been able to find conclusive evidence of this. She says she can still hear the mournful words of her mother the day her father left for the army: “I don’t think he’ll ever return.”

From Nagano to Manchuria 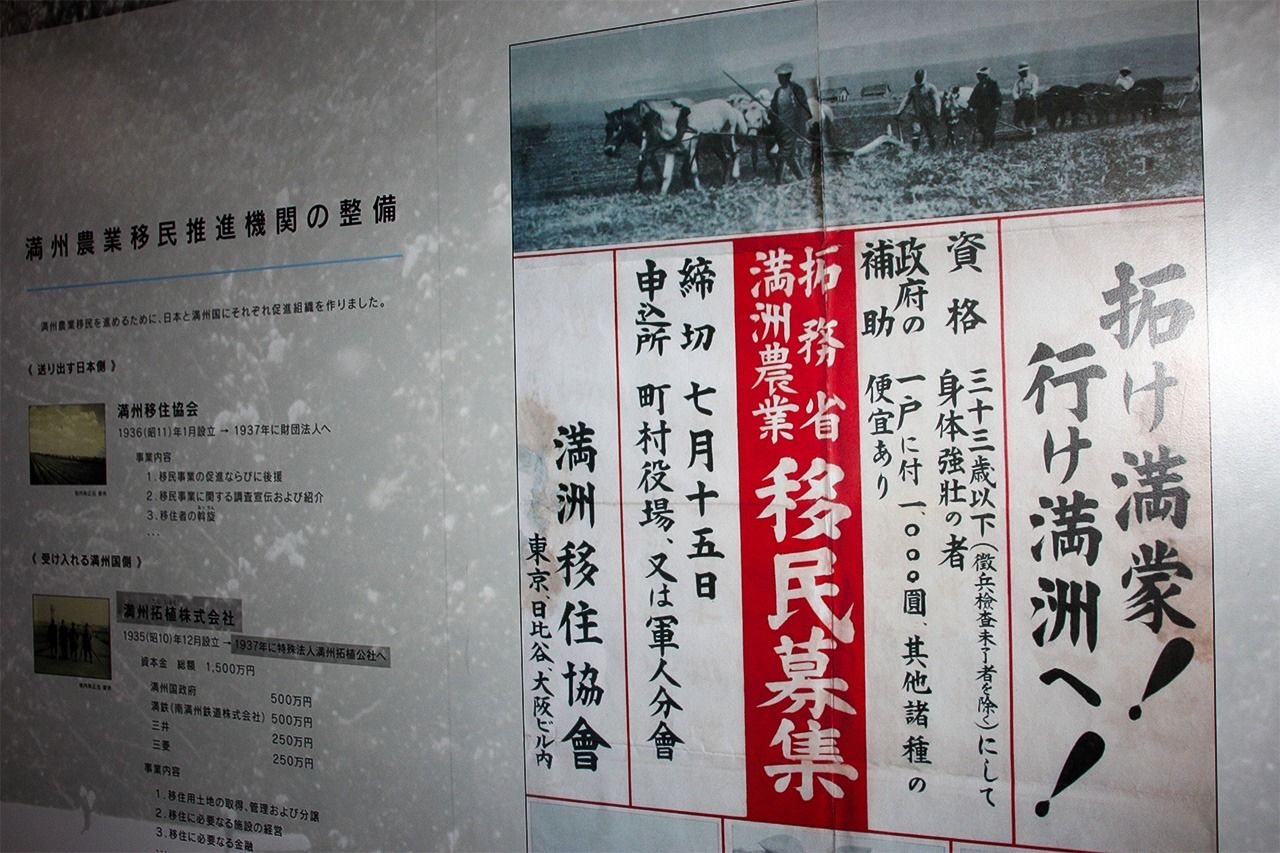 Reproduction of a poster to recruit emigrants. 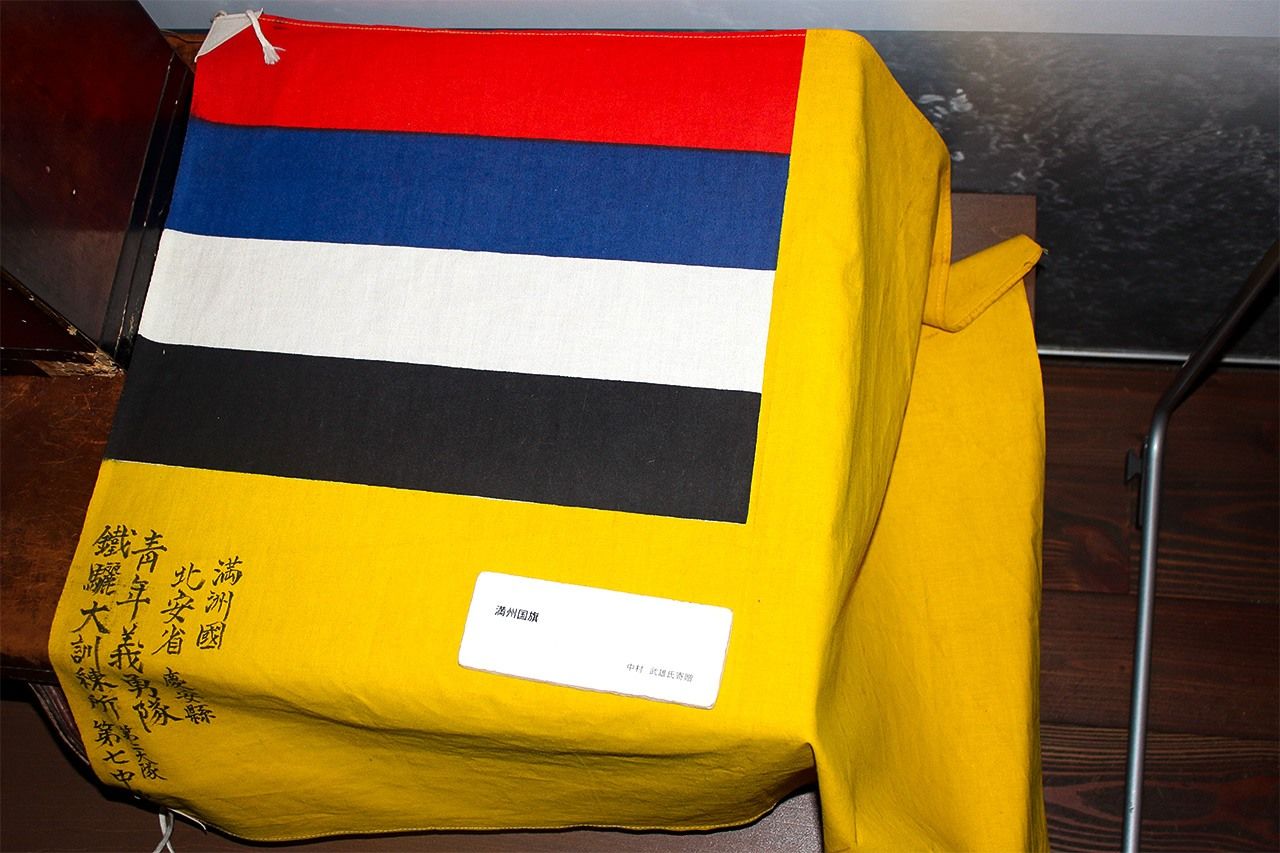 A flag from Japan’s puppet state of Manchukuo that was brought back by a former member of one of the “youth pioneering brigades.”

People across the country answered the call, forming some 800 groups of emigrants, including seishōnen gyūgun, or “youth pioneering brigades,” consisting of members as young as 14 and 15 years old. Around 30,000 residents of Nagano Prefecture chose to emigrate to Manchuria. At the time, many rural communities in Japan were struggling with poverty caused in part by the collapse in the price of raw silk and subsequent decline in the silk farming industry following the onset of the Great Depression. Consequently, local politicians and educators in many regional communities actively encouraged migration to Manchuria. In Nagano, the largest number of emigrants came from the Iida and Shimoina districts, in the south.

The Return of War Orphans

Near the museum is a temple where former head priest Yamamoto Jishō (1902–1990), nicknamed “the father of war orphans in China,” worked tirelessly to return children and others stranded in Manchuria. Yamamoto moved to Manchuria in May 1945 to work as a school teacher for emigrants from Achi. When Soviet forces invaded three months later, he was captured and interned in Siberia. Upon his return to Japan in 1947, he was heartbroken to learn that his wife, daughter, and many of his young students had perished in the turmoil that followed Japan’s defeat.

Repatriation of Japanese emigrants remaining in China and efforts to locate and return the remains of the deceased came to a halt when a diplomatic incident brought already unsteady Japan-China relations to a near standstill in 1958. According to Terasawa, the animosity was such that when groups in Japan petitioned the Chinese government for the repatriation of orphans, China countered that Japan should first return the remains of Chinese forcibly brought to Japan as mining and construction laborers.

In an effort to smooth relations, Yamamoto in 1963 gathered the remains of around 80 Chinese laborers who died during the construction of Hiraoka Dam, near the town of Tenryū in Nagano, and performed a Buddhist memorial service for their spirits. The following year, he took their remains to China, where he met with Chinese Premier Zhou Enlai.

Stories Nobody Wants to Hear

Repatriation of children and women had peaked by 2000. In 2003, 60 former emigrants formed a group of “storytellers,” wishing to pass on their experiences on to future generations. The group’s hopes to build a museum bore fruit in 2006, when they were able to secure land and funds, with support from neighboring municipalities and the prefecture. The privately constructed and operated museum finally opened in 2013.

The museum, built 68 years after the war, is the only facility dedicated to the story of emigration to Manchuria. Terasawa feels that the realization of the facility is the culmination of the problems faced by emigrants that continued postwar, but which can finally be relegated to history. 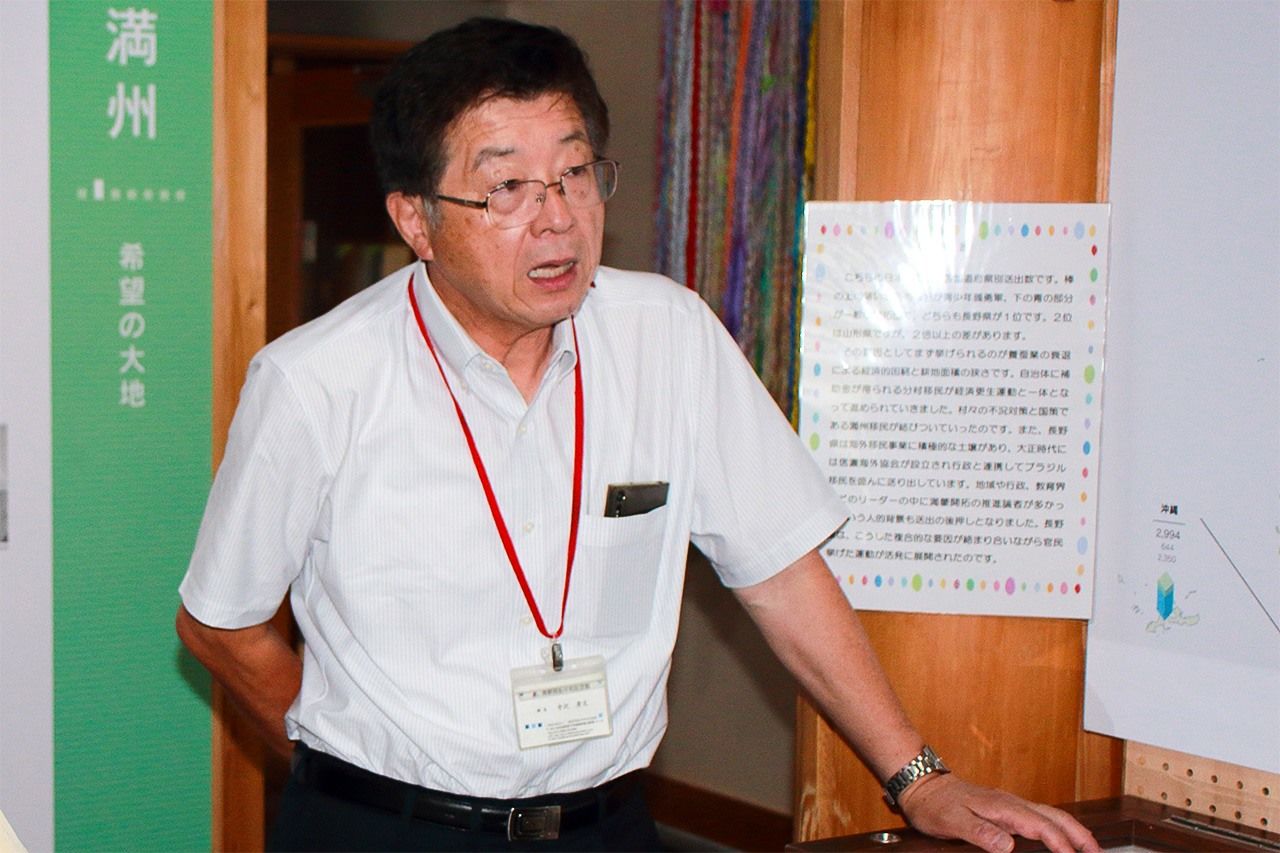 But for some people, details of emigration to Manchuria were something they did not want remembered. For example, Japan’s Kwantung Army has been heavily criticized for abandoning emigrant groups, including the elderly, women, and children, just before the war’s end. In addition, local leaders and teachers regretted their support for the emigration. Former emigrants themselves also felt remorse after the war for their part in Japan’s invasion of China.

Terasawa, the son of former emigrants, grew up in the remote mountain area his parents moved to after their repatriation. His father would say that his struggle to clear and cultivate their new land in Japan enabled him to more fully understood the sadness and bitterness felt by Chinese peasants whose farms and homes were appropriated by Japanese emigrants. He told his son that Japan had made a terrible mistake by going to war and related how local Chinese farmers were coerced into selling their land and homes to emigrants for a fraction of their value. “His words planted the seeds for my volunteer activities,” Terasawa says. “We must remember that the suffering of the emigrants was preceded by an egregious act by the Japanese government.”

“We were duped into moving to Manchuria by the government and then abandoned,” declares Kani Rikiichirō, an 89-yearold old resident of Nagiso in Nagano. “We are witnesses who managed to crawl back from the hell of war.” The war ended when Kani was 13, after which he moved in with a Chinese family for his own survival, living impoverished as a servant. He was 26 when he was finally able to return to Japan, in 1958. He worked in a regional forestry administration office before starting his own successful business, producing cypress chopsticks and other woodcrafts.

Kani volunteers at the museum on weekends when he is able. There he teaches visitors the historical background of Japanese migration to Manchuria and recounts his 24-day “hellish escape” from the frontier to Fangzheng in Heilongjiang Province, where today there stands a monument for Japanese emigrants who died in China. 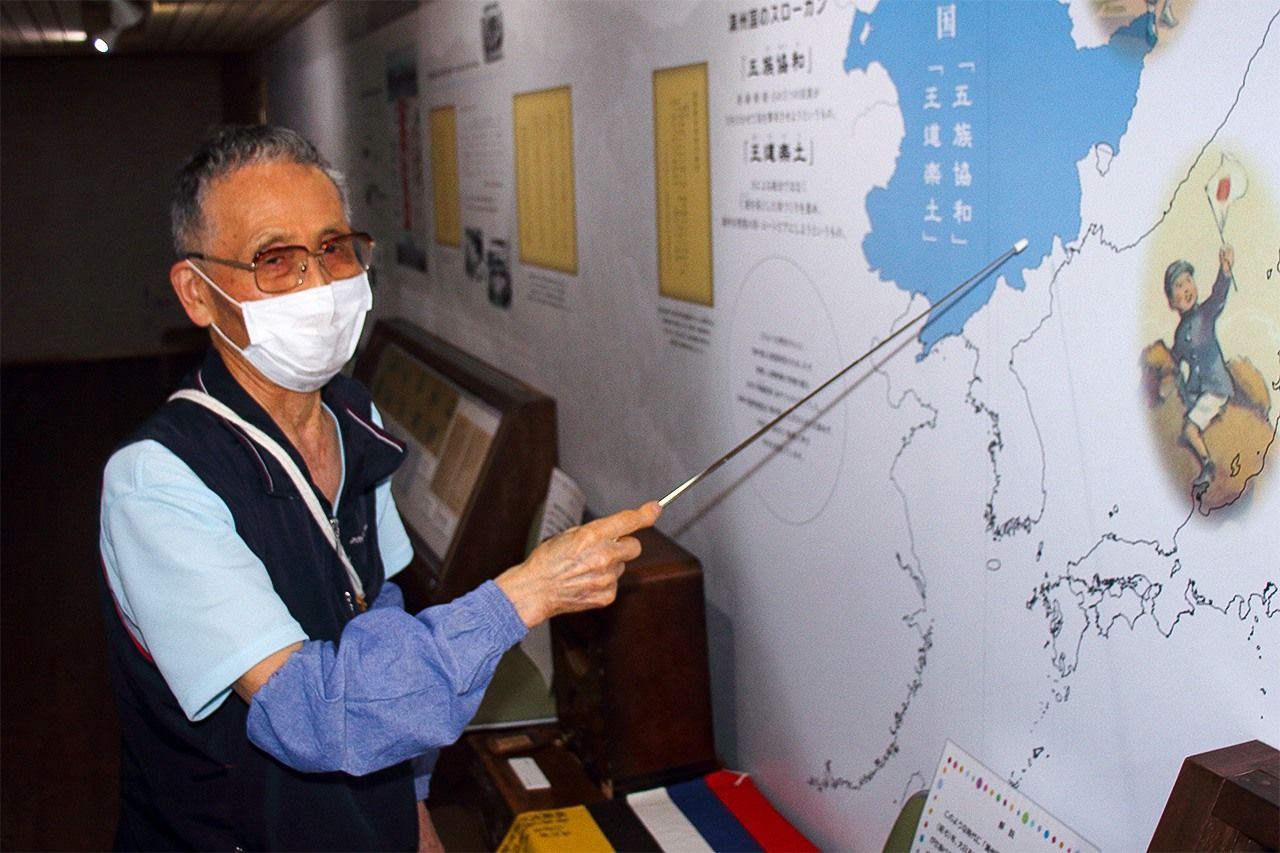 Kani also wants to share that although he suffered hardship in China after the war, there were Chinese people who treated him with kindness. “The ‘Five Races Under One Union’ motto promulgated by Japan in Manchukuo was nonsense” he states. “There was a clear racial hierarchy. Japanese were first-class citizens, followed by Koreans, then Chinese. It is no surprise that the Chinese people rebelled. Still, there were many in Manchuria with a strong sense of humanity. People like me survived thanks to their generosity.”

The museum’s organization is comprised of storytellers like Kitamura and Kani, and a volunteer group, Peace Labo, that supports other functions. Membership is not restricted to residents of Nagano. Members live as far away as Tokyo and the Kansai region, with 20 or so on duty at a given time. The museum organizes storytelling, exhibitions, and seminars. In addition, every August, a ceremony for the repose of souls is held on the grounds. The museum is a focal point that binds together former emigrants and their families.

Monument of Peace and Friendship (left), and an engraving of a poem by then Emperor Akihito during a visit by the royal couple in November 2016.

Monument of Peace and Friendship (left), and an engraving of a poem by then Emperor Akihito during a visit by the royal couple in November 2016.

(Originally published in Japanese. Research, text, and photographs by Ishii Masato of Nippon.com. Banner photo: The Memorial Museum for Agricultural Emigrants to Manchuria. A stand of poplar trees, reminiscent of northeastern China, are visible to the left.)