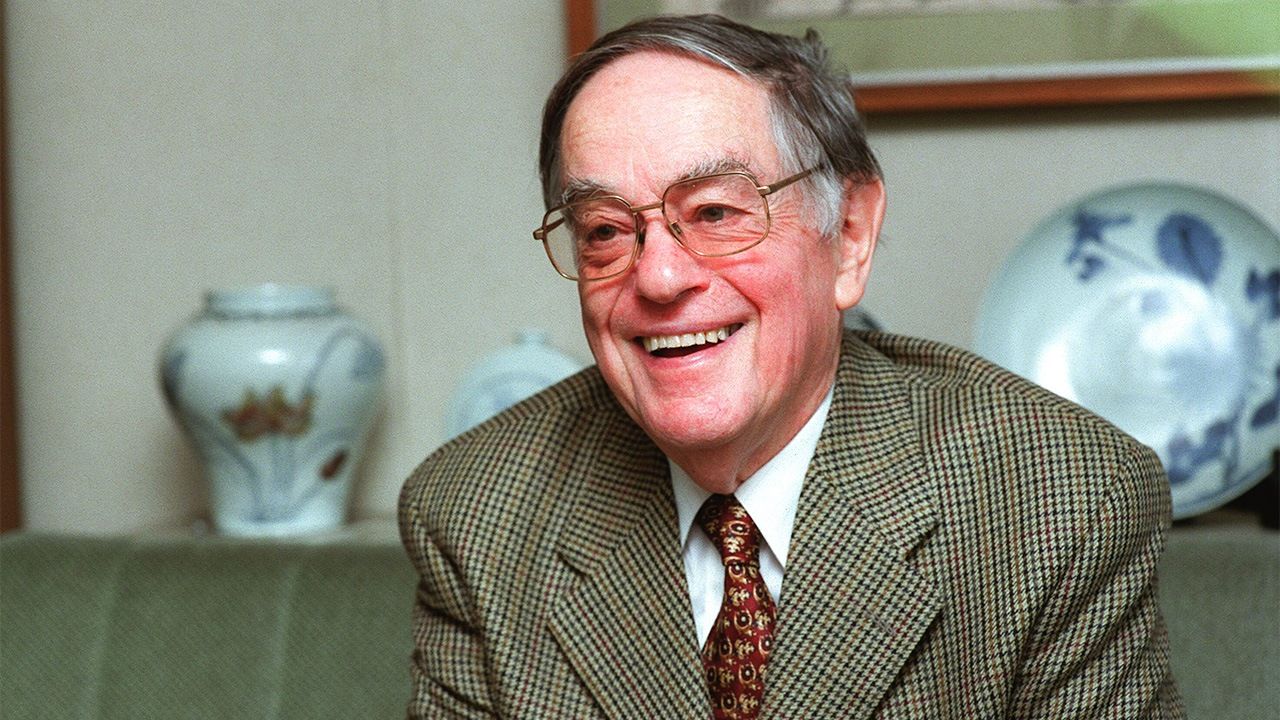 Culture Language Feb 21, 2019
Almost 80 years have passed since Donald Keene first happened on a copy of The Tale of Genji in a New York bookstore, sparking off a remarkable career as a translator and scholar of Japanese literature.

Editor's note:
Just three days after we published this article, on February 24, 2019, Donald Keene passed away at the age of 96. We salute his lifetime of achievements in bringing Japan closer to the world through literary translation and analysis and offer condolences to his adopted son, Keene Seiki, and others close to him. May he rest in peace.

In March 2012, consummate scholar and translator of Japanese literature Donald Keene, born in 1922, took Japanese citizenship at the age of 89. He currently lives in the north of Tokyo. Among his plethora of books, his comprehensive four-volume History of Japanese Literature,(*1) also published in Japanese, particularly catches the eye. The broad survey, written entirely by Keene, covers a striking range of works with extensive translations of original texts, many by the author himself. The project began in 1976 and took him until 1997 to complete.

Introducing Japanese Literature to the World 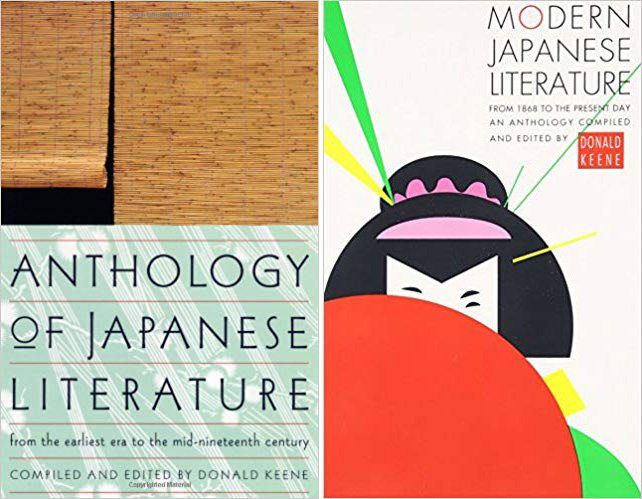 This was not the first grand undertaking Keene executed in style. While still in his early thirties, he introduced the full sweep of Japanese literature to readers around the world as the editor of two volumes, the Anthology of Japanese Literature: From the Earliest Era to the Mid-Nineteenth Century and Modern Japanese Literature: From 1868 to the Present Day. These presented famous works, from early classics like the poetry anthology Man’yōshū and The Tale of Genji to the output of such modern authors as Mishima Yukio and Dazai Osamu. They were published in New York in 1955 and 1956, respectively. For the translations, he either used existing versions, asked friends and acquaintances, or wrote them himself. As well as Japanese fiction and other prose, the anthologies include poetic forms like waka and haiku, poetry and prose in classical Chinese, and texts from the performing arts nō, kyōgen, and bunraku. The well-balanced lineup has a perennial charm.

Keene reflects with a smile. “I was fortunate that I managed to complete this work of my youth without making any major errors.”

He compiled the anthologies while undertaking postgraduate study at Kyoto University from the summer of 1953. Planning and editing the lengthy manuscript and negotiating its publication were all completed in less than two years, by the time he returned to the United States in May 1955. 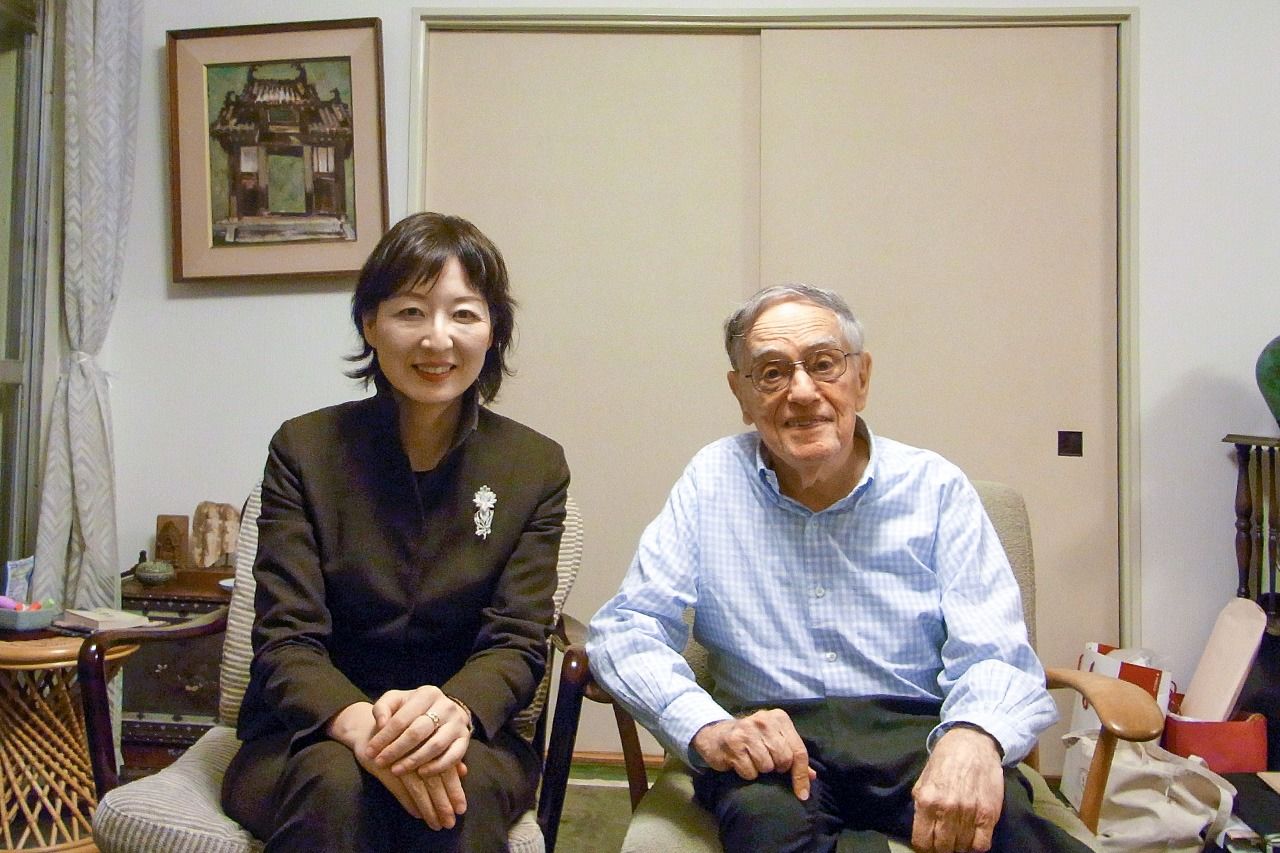 Donald Keene with the author Kawaji Yuka in his Tokyo home on November 18, 2013. (Courtesy Kawaji Yuka) 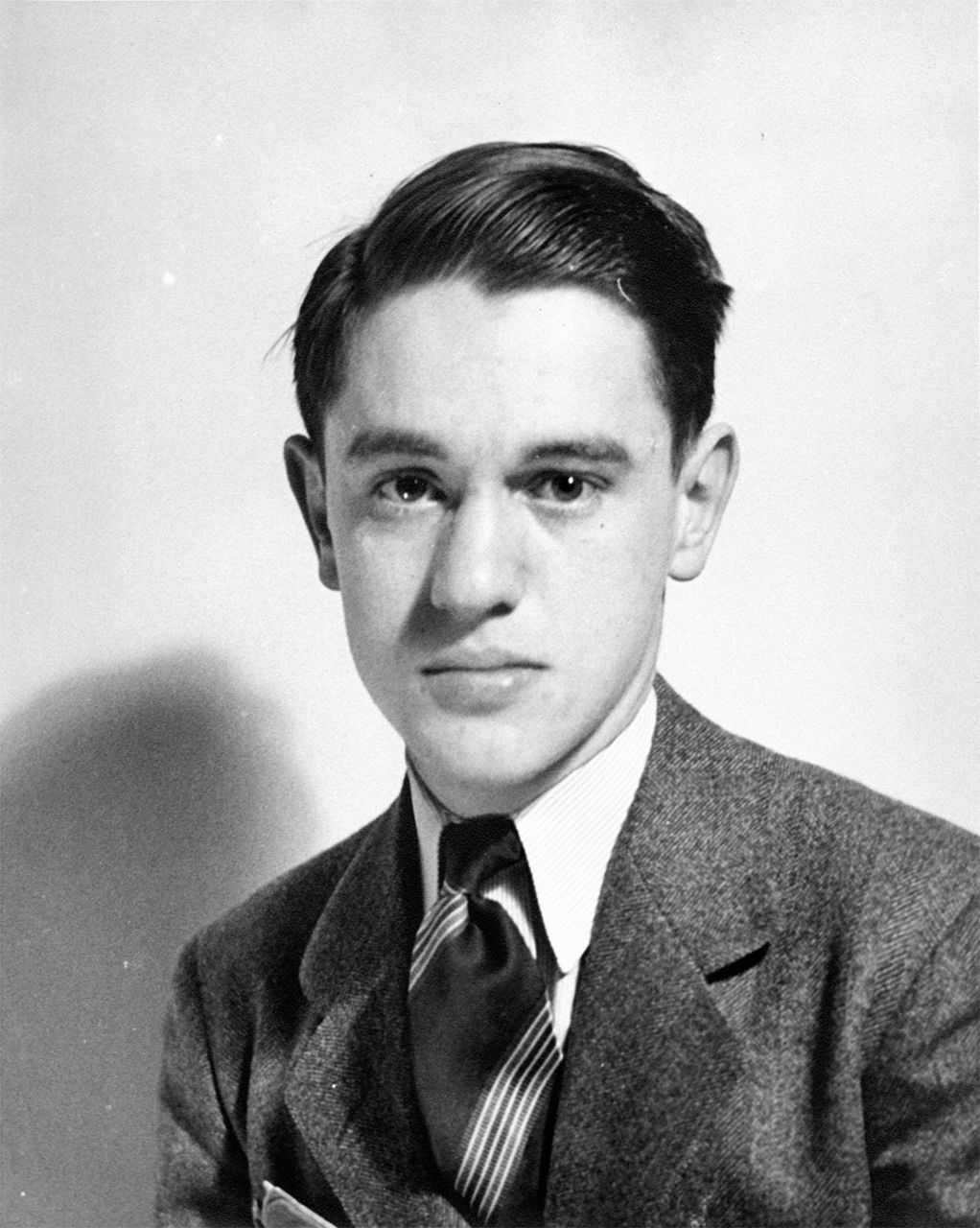 Keene’s first encounter with Japanese literature came in 1940, when he acquired Arthur Waley’s two-volume translation of The Tale of Genji for 49 cents in a New York bookstore. He was spellbound. His excellent academic performance had led him to begin study at Columbia University at the age of just 16 in September 1938. After the outbreak of World War II in Europe the following year, the constant reports of the conflict left him too scared to read the newspaper. At this troubled time, the refinement of Waley’s Genji captured his heart.

He went on to deepen his understanding by attending classes on the history of Japanese thought helmed by Tsunoda Ryūsaku at Columbia University. Then, in December 1941, Japan launched a surprise attack on Pearl Harbor, initiating war with the United States. Keene soon learned of the existence of a US Navy Japanese language school at the University of California, Berkeley. Hearing on the radio that the Japanese language was essential to the war effort, but there were not enough proficient speakers, he wrote a letter expressing his desire to enroll at the school and was accepted. From the start, his purpose was nothing more or less than to learn Japanese.

Keene studied Japanese intensively at the Navy school from February 1942 until January 1943. Many of the teachers were Japanese-Americans, and Hyōjun Nihongo dokuhon (Standard Japanese Reader) by the Japanese educator Naganuma Naoe was a set text. In addition to learning to read and write at the same level as an educated native speaker, students had to master the understanding of handwritten forms in order to decipher letters, diaries, and other such texts that could have military significance. The dedication of the Japanese-American teachers helped to build a firm relationship of trust.

After completing the course, Keene went to Pearl Harbor as a navy intelligence officer, was assigned successively to Attu, Kiska, and Adak in Alaska’s Aleutian Islands, and subsequently went on to the Philippines, Okinawa, and Guam. He translated Japanese military documents, read diaries left by Japanese soldiers, and interpreted in exchanges with prisoners of war. His experience with his teachers meant that he bore no hatred toward the Japanese people he met on the battlefield, and he says that he strongly appreciated the feelings of the diaries’ writers. One of his finest later works is the anthology Travelers of a Hundred Ages, which compiles selections from 1,000 years of Japanese diaries. His interest in the form stems from his wartime experience. 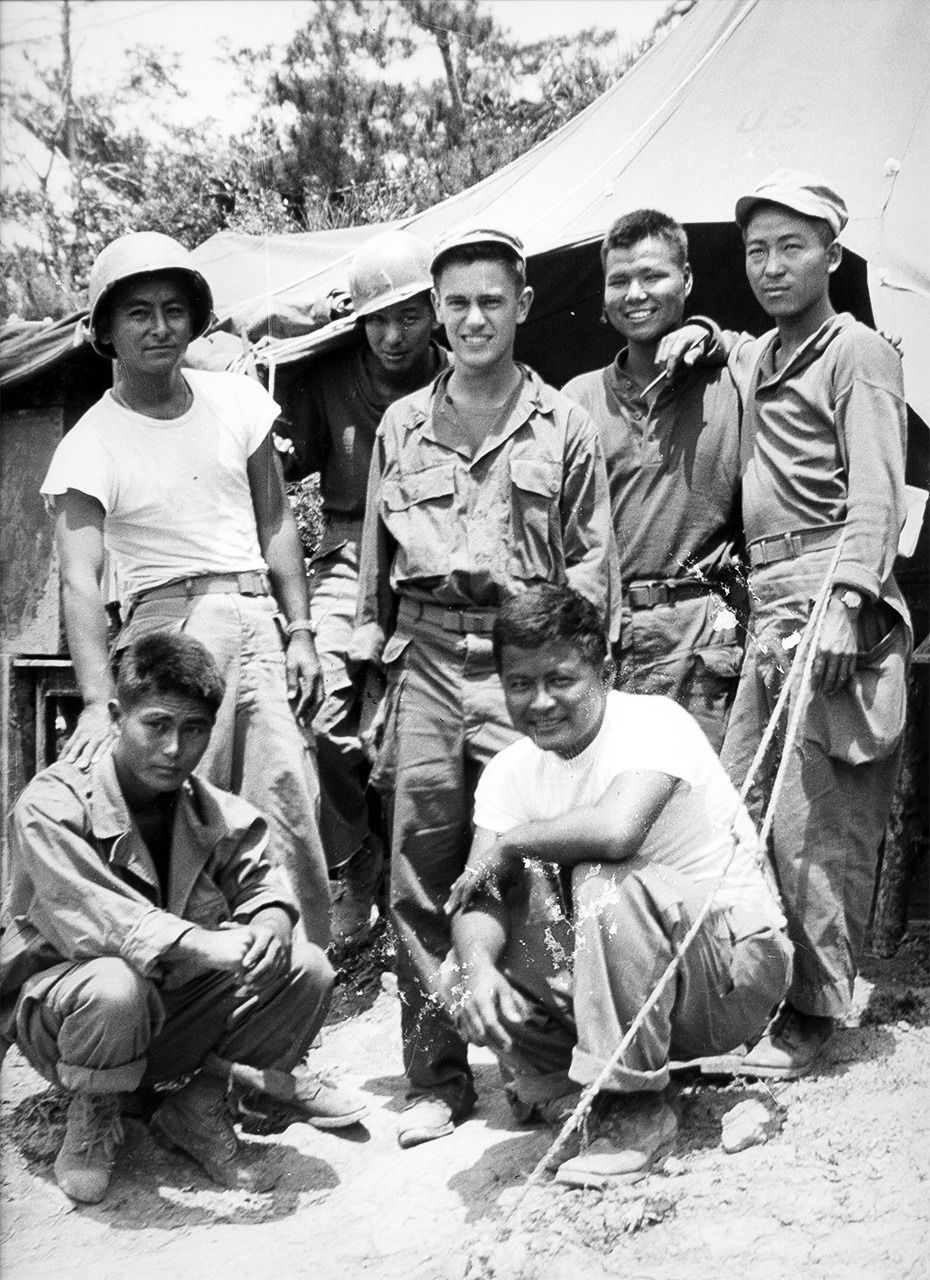 Donald Keene (standing at center) pictured with Japanese-American subordinates during the time he was assigned in Okinawa as a translator and interpreter from April to July 1945. (Courtesy Donald Keene Center Kashiwazaki)

The war ended earlier than he expected, in August 1945. Keene returned to Columbia University for postgraduate study of Japanese literature. In the autumn of 1947, he transferred to Harvard University; in the following year, he began research at Cambridge University in Britain. In 1951, he received his doctorate from Columbia for his research into the bunraku puppet theater of Chikamatsu Monzaemon.

The Lifestyle of an Earlier Japan

Under the Allied Occupation (1945–52), Japan did not accept any foreign students. It was only after it regained national sovereignty based on the 1951 San Francisco Peace Treaty that Keene could fulfill his long-cherished desire of studying in Kyoto. With a scholarship grant, he arrived in the historic former capital in the summer of 1953.

Keene stayed in a detached cottage at a traditional minka in Imakumano, eastern Kyoto. It was surrounded by cherry and maple trees, and he could hear the murmuring of a nearby brook. Wishing to experience the lifestyle of an earlier Japan, in the chill of winter he warmed the room with charcoal burned in a hibachi brazier rather than using a stove, and he ate washoku meals prepared for him by the minka owner Okumura Ayako. He also placed a low writing desk on the tatami floors of the study, and worked there sitting in the seiza position. This is where he typed his literature anthologies.

The first, the Anthology of Japanese Literature, was published in September 1955, after he had returned to the United States. Under the terms of the publishing agreement, the Japan Society would purchase any unsold books in the initial 2,000-copy print run. By Christmas, however, the first edition was sold out. The unexpected demand was fueled by the many Americans who had come into contact with Japanese people, or had been to Japan during the war and occupation, and wanted to know more about the culture. The following year, the Modern Japanese Literature anthology was published. Both have gone through numerous editions and remain in print today.

In 2006, Columbia University held a celebration to mark 50 years of the anthologies’ publication. Teachers, researchers, and translators of Japanese literature gathered from around the world. Keene remembers the joy of people telling him that their first meeting with Japanese literature was in the pages of his book. 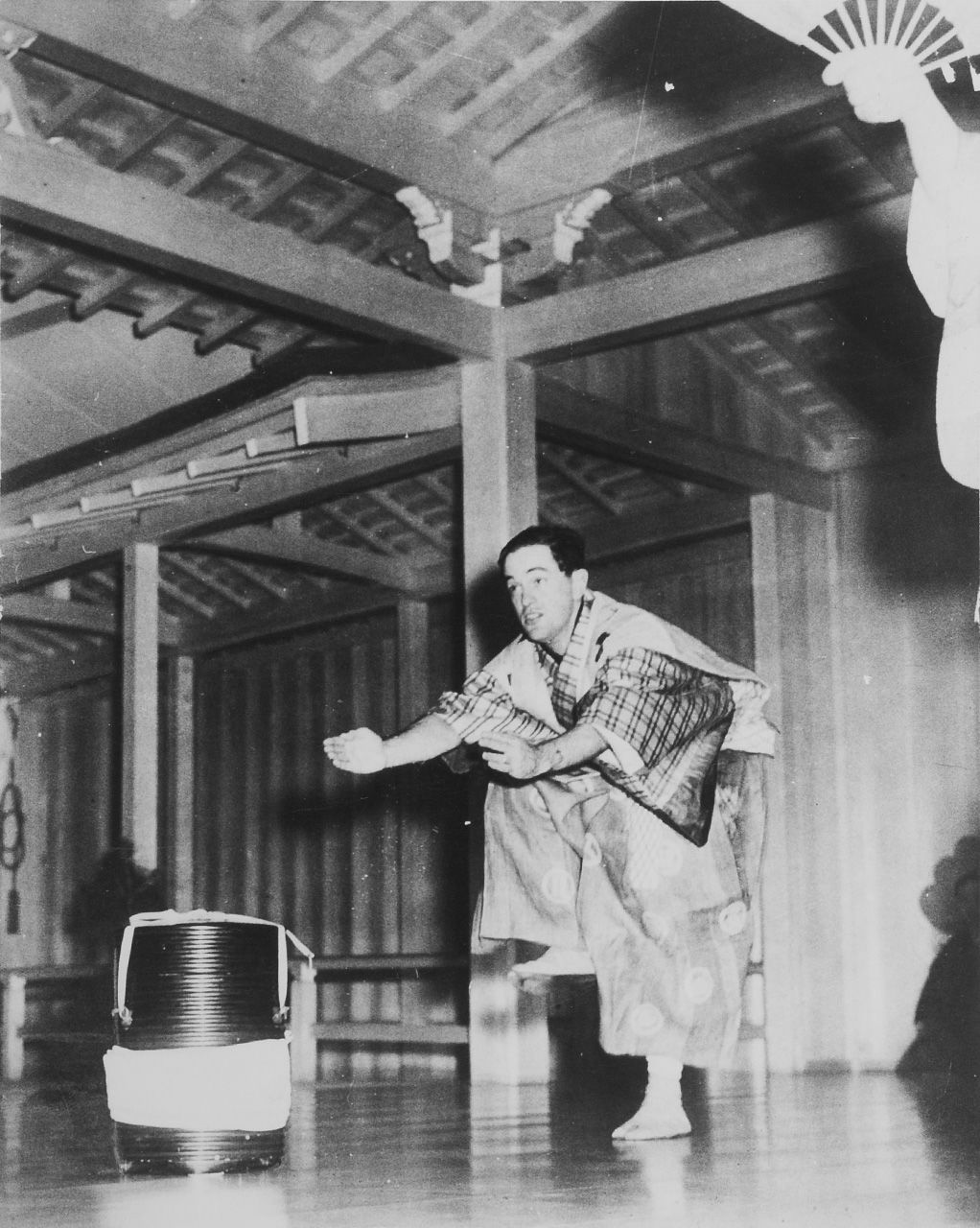 A Turn to Biography

Keene moved away from research and translation of Japanese literature with the fresh challenge of a biography of Emperor Meiji, published in 2001. The English version Emperor of Japan: Meiji and His World, 1852–1912 runs to more than 900 pages. It was only in 1946, after Japan was defeated in World War II, that Emperor Shōwa formally renounced his divinity. Keene’s work was the first biography to treat Emperor Meiji as a man. With quiet composure and respect, based on wide-ranging sources, he wrote the life story of a man who fulfilled the role of a god in modern Japan, yet had an international perspective. Keene has gone on to write further biographies of the painter Watanabe Kazan and the poets Masaoka Shiki and Ishikawa Takuboku. 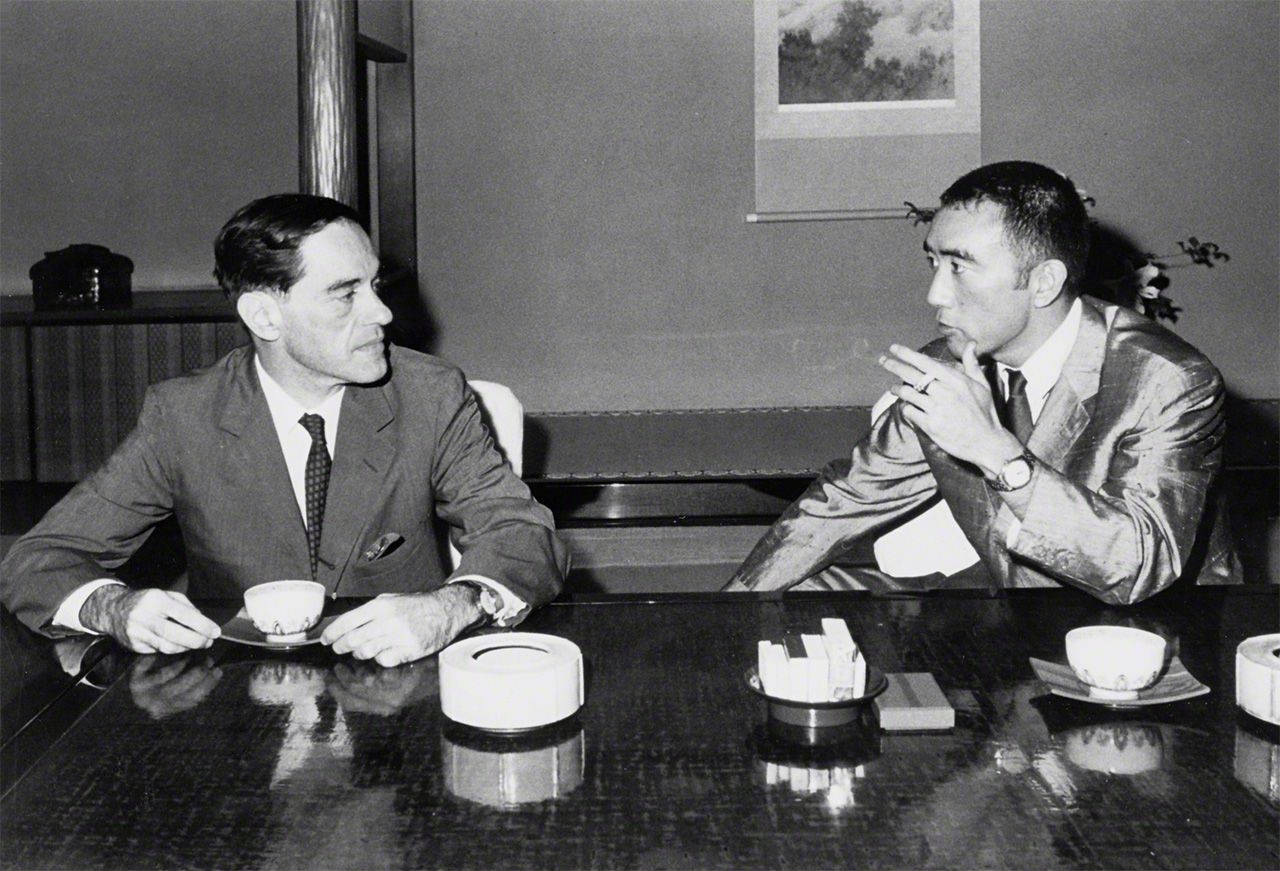 At the same time that he took Japanese citizenship in 2012, Keene adopted as his son a samisen player specializing in music for bunraku. Keene Seiki, also known by his stage name Echigo Kakutayū, is now 68 years old. 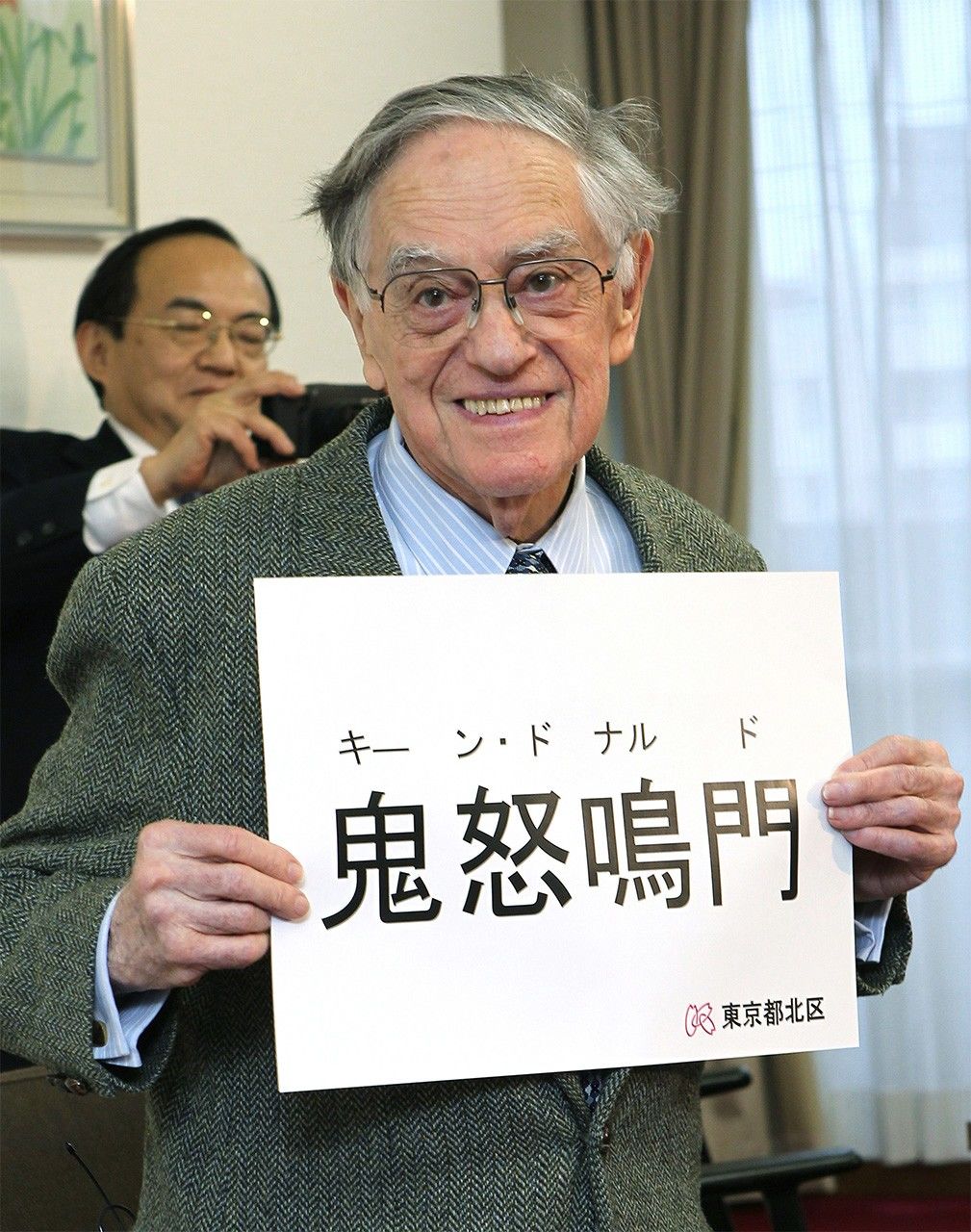 Keene shows reporters his official Japanese name in kanji in Tokyo on March 8, 2012, after taking Japanese citizenship. In the background is his adopted son Seiki. (© Jiji)

Kakutayū wrote music for an early bunraku play discovered in the British Museum by a friend of Keene’s, which he performed for the first time in 2009. Kakutayū and Keene worked to bring a performance to the British Museum itself in June 2017. The play’s manuscript was taken to Europe from Japan in 1692 by Engelbert Kaempfer, a German doctor who worked at the Dutch concession in Dejima, Nagasaki. Its revival brought Keene and his adopted son together.

Kakutayū calls Keene “Father” as they laugh and joke together. Keene was not blessed with a particularly happy household in the United States, but now, as a Japanese citizen, he enjoys participating as one of the family in lively gatherings of his son’s relatives.

At 96, he is still working on his next book. “I’ve never thought for any of them,” he says, “that this is the last one I’ll write.” 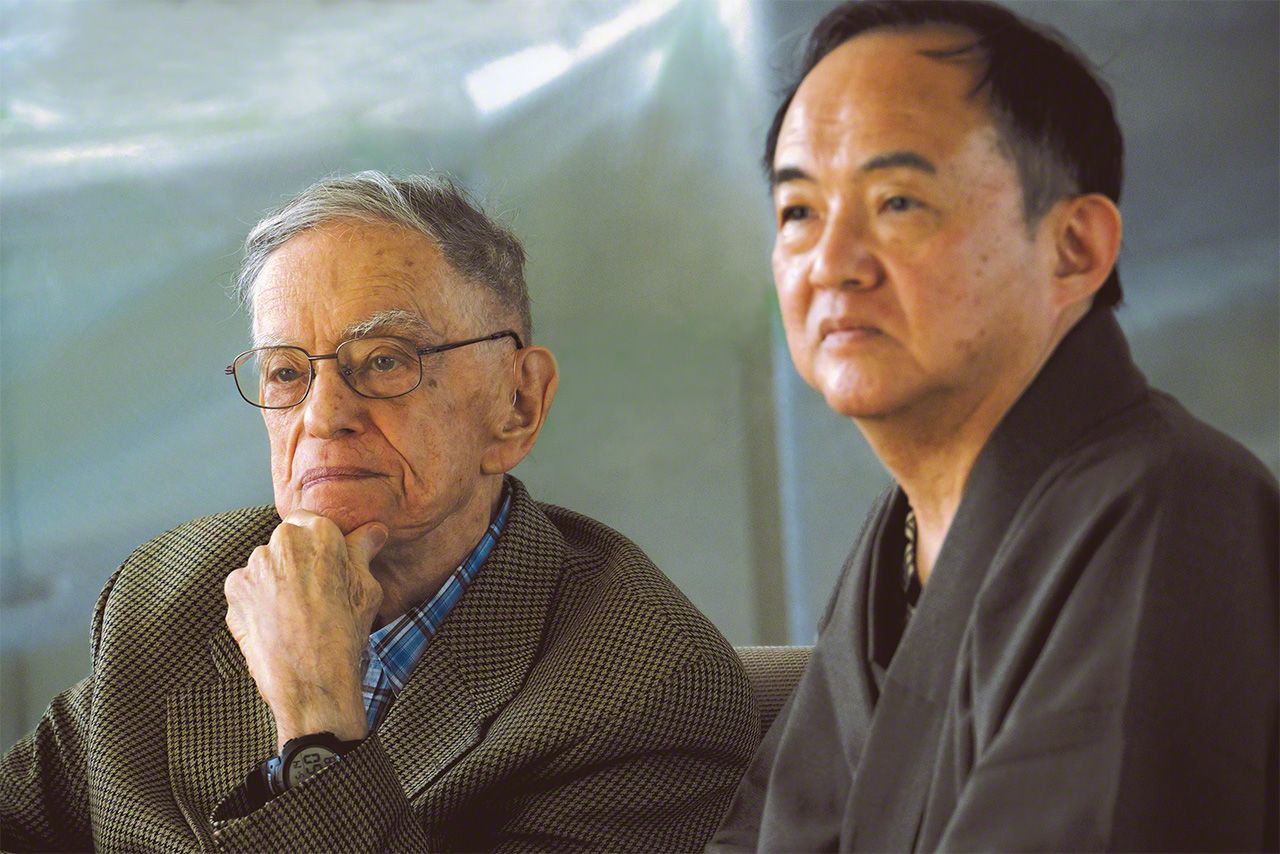 Keene and Seiki at a jōruri puppet theater rehearsal at the Donald Keene Center Kashiwazaki in May 2017. (© Miyazawa Masaaki)