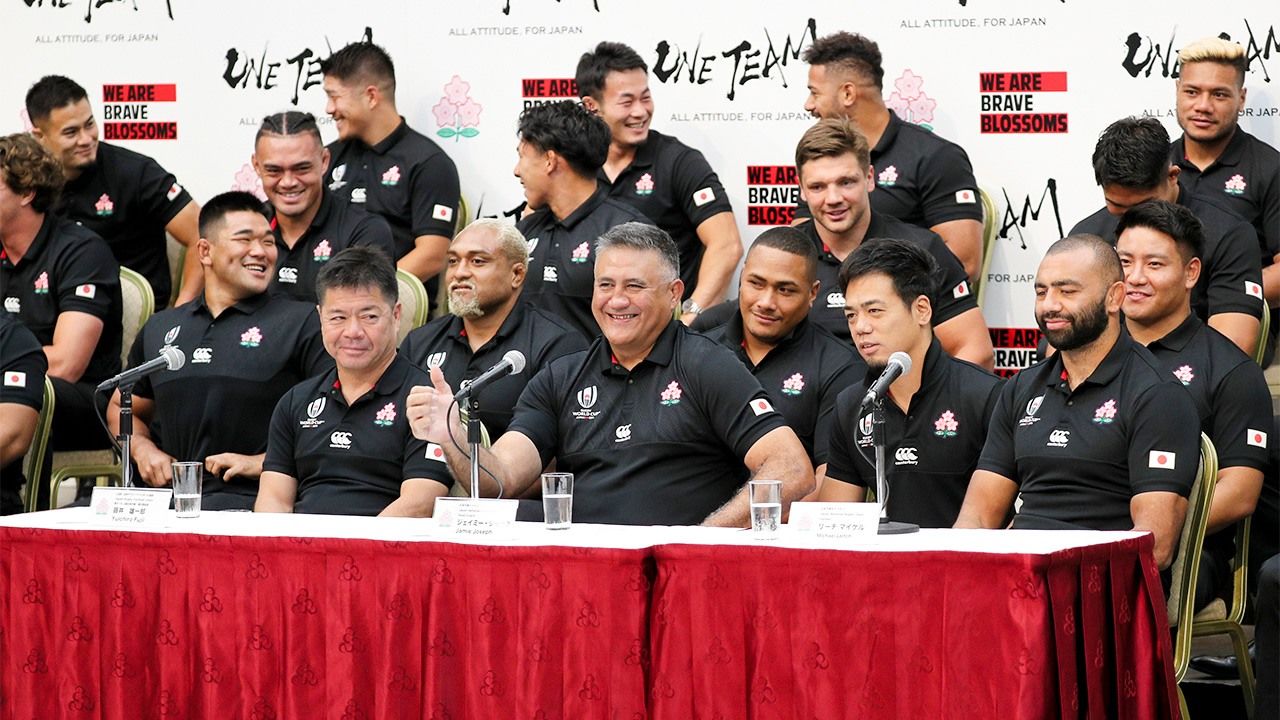 Culture Language Dec 2, 2019
On December 2, “One Team” was tapped as the grand prize winner in the “Words of the Year” contest for 2019. The slogan for Japan’s Brave Blossoms rugby squad was joined by other terms touching on sports, as well as the economy, natural disaster, and the latest food fashions in the list of finalist terms that summed up this year in Japan.

One Term at the Top of the List: “One Team”

At a ceremony held in Tokyo on December 2, the editors of Gendai yōgo no kiso chishiki (Basic Knowledge on Contemporary Terminology) announced the Words of the Year for 2019. We covered the full list of 30 nominees previously; today, the 10 finalists were announced, along with a single grand-prize winner: “One Team,” the slogan that head coach Jamie Joseph used to build unity for the Brave Blossoms, the national rugby team that made it to the quarterfinal round for the first time ever in the Rugby World Cup held in Japan this fall.

The sports world also provided Sumairingu Shinderera and Shibuko, a paired set of terms referring to breakout golf star Shibuno Hinako, and Kōkai nado arō hazu ga arimasen, a stately phrase uttered by superstar Suzuki Ichirō expressing “no regrets” at retiring from pro baseball after a spectacular career on both sides of the Pacific. His quote was chosen to receive a special judges’ prize, adding it as an eleventh term celebrated today. Well-known terms from the news included keikaku unkyū, the “planned stoppages” on the capital’s train lines to avoid chaos and casualties when typhoons struck the region head-on, and Reiwa, the name given to the new imperial era that began on May 1, when Emperor Naruhito took the throne after his father’s abdication.

Ceremony-goers were unable to see a “Cinderella smile” from Shibuno, who wrapped up season play in the LPGA Tour Championship Ricoh Cup in Miyazaki Prefecture this weekend, or an appearance by Ichirō, who made the news for his own outing as a pitcher and batter in a sandlot game in Kōbe on Sunday. A number of representatives did appear to collect the prizes for the words associated with them, including Mizushima Satoru, director-general of the Railway Bureau in Japan’s Ministry of Transport, taking the stage for keikaku unkyū. Also on hand was Ishikawa Yumi, an online activist who coined the #KuToo hashtag to protest companies insisting on high heels and other uncomfortable footwear for their female employees.

Comments from the selection committee members shed light on their approaches to the material provided by 2019. The linguist Kindaichi Hideho noted that the words selected for this contest tend to be those associated with some major event. “It is difficult,” he said, “to identify those that will actually go on to be truly popular terms so close to their inception.” He had high hopes for nikunikushii, an adjective meaning “meaty” that was not among the finalists, as one that showed promise for its further malleability—“the potatoesque imoimoshii has already appeared in use by spud lovers, and shrimp fans may come up with an ebiebi version for their favorite seafood.”

The manga artist Shinsan Nameko hailed the inclusion of #KuToo as a term “that, through its use in sharing people’s pain, helped in the end to ease it.” She was echoed by Ōtsuka Yōko, editor in chief of Gendai yōgo no kiso chishiki, who praised the hashtag as an offering that was not the province of just one gender, but that aimed to create a better society for all to live in.

Some judges talked about the year’s depressing news—corporate and political scandals, natural disasters, higher taxes, and traffic accidents involving elderly drivers. “It was rugby more than anything that dispelled the shadow of these events,” said University of Tokyo Professor Emeritus Kang Sang-jung; the Brave Blossoms’ exploits on the field, along with Shibuno’s smiles, were touched on by several other committee members as uplifting moments that brought new words to the Japanese vocabulary this year.

#KuToo. A play on the #MeToo hashtag to raise awareness of sexual harassment and abuse, this term tweaked the Japanese words kutsu (shoes) and kutsū (pain or discomfort) to point at the sexism inherent in expectations and, in many cases, rules demanding that women should wear uncomfortable high heels or pumps in the workplace. The writer and former pinup model Ishikawa Yumi is said to have coined the hashtag.

計画運休 — Keikaku unkyū. These “planned service outages” were announced ahead of time by railway operators concerned about the impact of Typhoons Faxai and Hagibis. Crowding and chaos ensued as commuters and other travelers made their way to stations the next mornings to find that the trains would remain out of service for hours—in some cases days—after the announced times of resumption.

軽減税率 — Keigen zeiritsu. The October 1 hike of the consumption tax rate from 8% to 10% included a “reduced tax rate,” the original 8%, applied to food purchases, newspaper subscriptions, and a bewilderingly complex list of other items. Consumers entered an age of confusion thanks to rules stating, for instance, that the higher rate applied to meals consumed on the premises, but not those taken out.

後悔などあろうはずがありません — Kōkai nado arō hazu ga arimasen. “Of course I have no regrets about my career,” came the stately reply from baseball legend Suzuki Ichirō to a reporter’s question posed after he announced his retirement from the sport following the second of two season-opening games between his Seattle Mariners and the Oakland Athletics played in Tokyo.

スマイリングシンデレラ/しぶこ — Sumairingu Shinderera/Shibuko. Golfer Shibuno Hinako shot to golf stardom when she captured the Women’s British Open in her first appearance, becoming only the second Japanese player to win a major title. Smitten by the young talent, Japanese fans dubbed her the “smiling Cinderella” for the warm grin she wears during interviews and on the links, and took to affectionately calling her Shibuko, a truncated version of her first and last name.

タピる — Tapiru. Bubble tea mania continues unabated as outlets hawking the tapioca-based drink pop up all around Japan. The trend has reached such a fever pitch that aficionados even coined a new verb, tapiru, to describe going out for a tapioca beverage.

○○ペイ — –pei. Cashless payment systems based around scanning QR codes from smartphone apps proliferated in 2019, and many ended in the suffix “–Pay,” including PayPay, FamiPay, and the ill-fated 7Pay.

免許返納 — Menkyo hennō. It is still hard to get by without a car outside the big cities, but concerns about elderly drivers are rising after high-profile accidents, sustaining the movement to encourage voluntary “return of driving licenses.”

闇営業 — Yami eigyō. “Shady business” in the entertainment world hit the headlines as a number of comedians at the Yoshimoto Kōgyō agency were found to have supplemented their earnings by performing for criminal groups.

令和 — Reiwa. The new era name, announced one month before Emperor Naruhito ascended the throne on May 1, was the first to be taken from a Japanese classic rather than Chinese literature. The characters come from the preface to a series of poems in the eighth-century Man’yōshū anthology. Reiwa’s official English translation is “beautiful harmony.”

One Team — Japan rugby coach Jamie Joseph set his sights on building strong unity among his players through this motto.

(Originally published in English. Banner photo: Head coach Jamie Joseph, with thumb up at center, poses with members of the Brave Blossoms at an October 21, 2019, press conference the day after their quarterfinal loss to eventual Rugby World Cup champions South Africa. ©︎ Jiji.)